I’ve already written about how we met, but I rarely ever write about our more recent dates together unless we were traveling. So let me tell you about our first ‘date’. At the time, it wasn’t even considered a romantic date. We made a couple of bets against each other which resulted in me getting a free movie out of him the next time we ‘hang out’. He would never admit it out loud, but I can make another bet right now that that was the outcome he was hoping for. *wink*

It was a Saturday. We agreed to meet up at McDonalds Vito Cruz since I had morning classes that term. We hanged out at mostly the same places, but with different people, and it was the first time we made plans to actually go out together. He wore a white statement shirt, and he had an empty pack of fries and chicken nuggets on his tray when I arrived. Our first cab ride alone was filled with awkward silence and stilted conversations. It did get better once we picked out a movie (Madagascar 2, if you’re interested). We had more than an hour to burn while waiting for the movie to start so I asked if he wanted to have lunch since I haven’t eaten yet, and dragged him to Bacolod Chicken Inasal where I proceeded to demolish a quarter of chicken and extra rice. I haven’t eaten anything that day yet (and it wasn’t a date). You can probably imagine hearts coming out of his eyes because his moniker is not ‘Chicken Boy’ for nothing. He already secured a couple more dates, again in the guise of a ‘hang out’, halfway through the first one, before we even got dessert and watched the fireworks. He denies this and would insist that he wasn’t smitten immediately with me, but my version of this story is the truth. Haha! 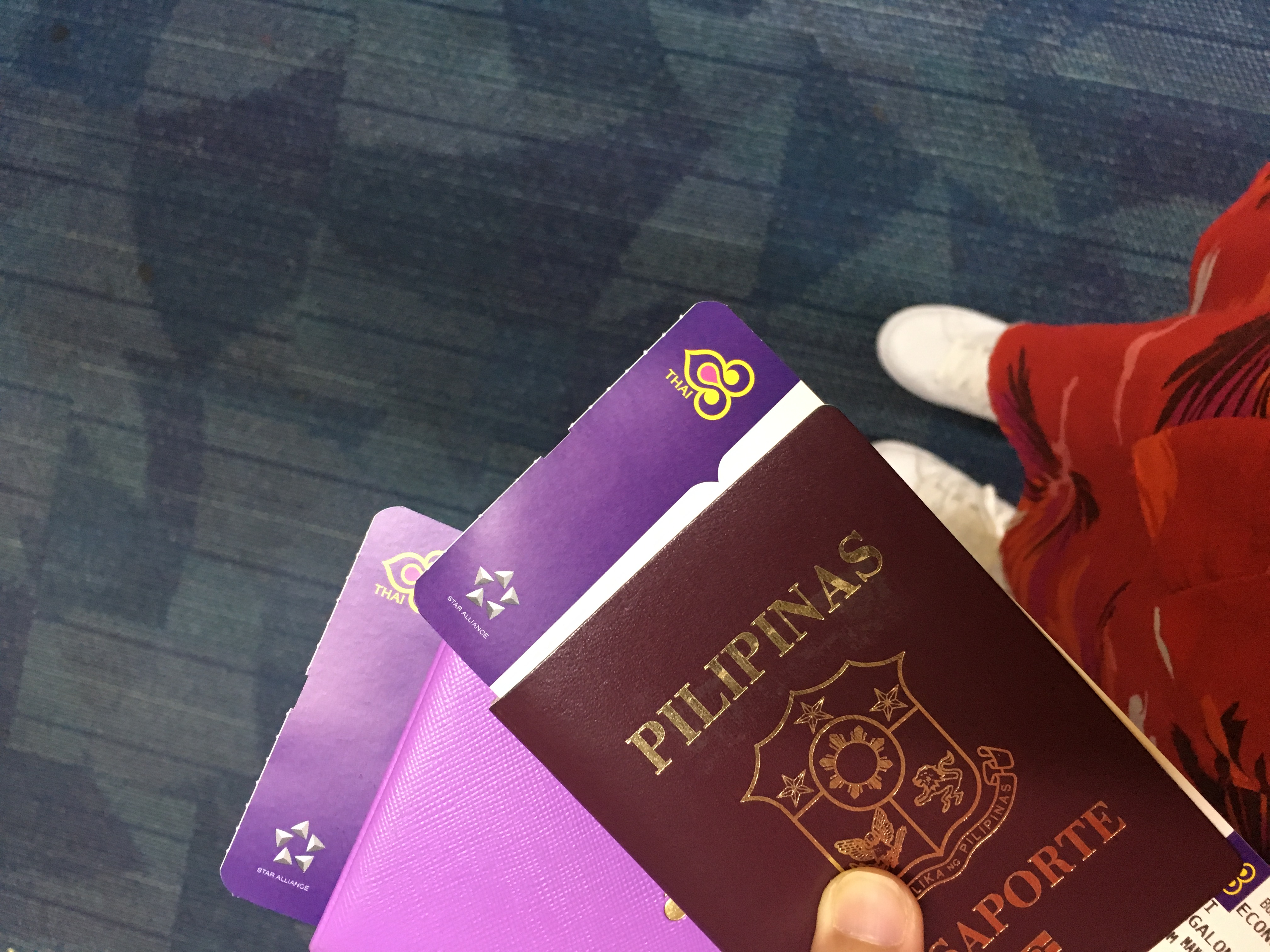 Late last year, a friend and I were talking about traveling to Indochina when she mentioned that there was an ongoing seat sale on the Thai Airways website. Whenever we start planning trips, I get C to nail down the dates first on his calendar (he’s an entrepreneur) and I give him a list of interesting things to do in that area. Once we lock down the dates and I have a list of the things he wants to do, I dive right into planning and booking everything. I basically just send him options and which one I’m leaning towards before we make the decision together. While to some, this may seem like I’m taking the brunt of work, this is what the dynamic of our relationship is like. I enjoy doing the research and coordinating everything (which is eerily similar to my line of work but definitely not as enjoyable) and he likes to go along with whatever crazy idea I come up with next. But I digress. Since I already had the dates of when C could take a leave from work, I went to the website, found the prices reasonable, and booked it. I wish I can plan trips to go on every day. Scratch that. I already do and I already have rough drafts for the places I intend to visit in the future. (I just need the money to make it happen) 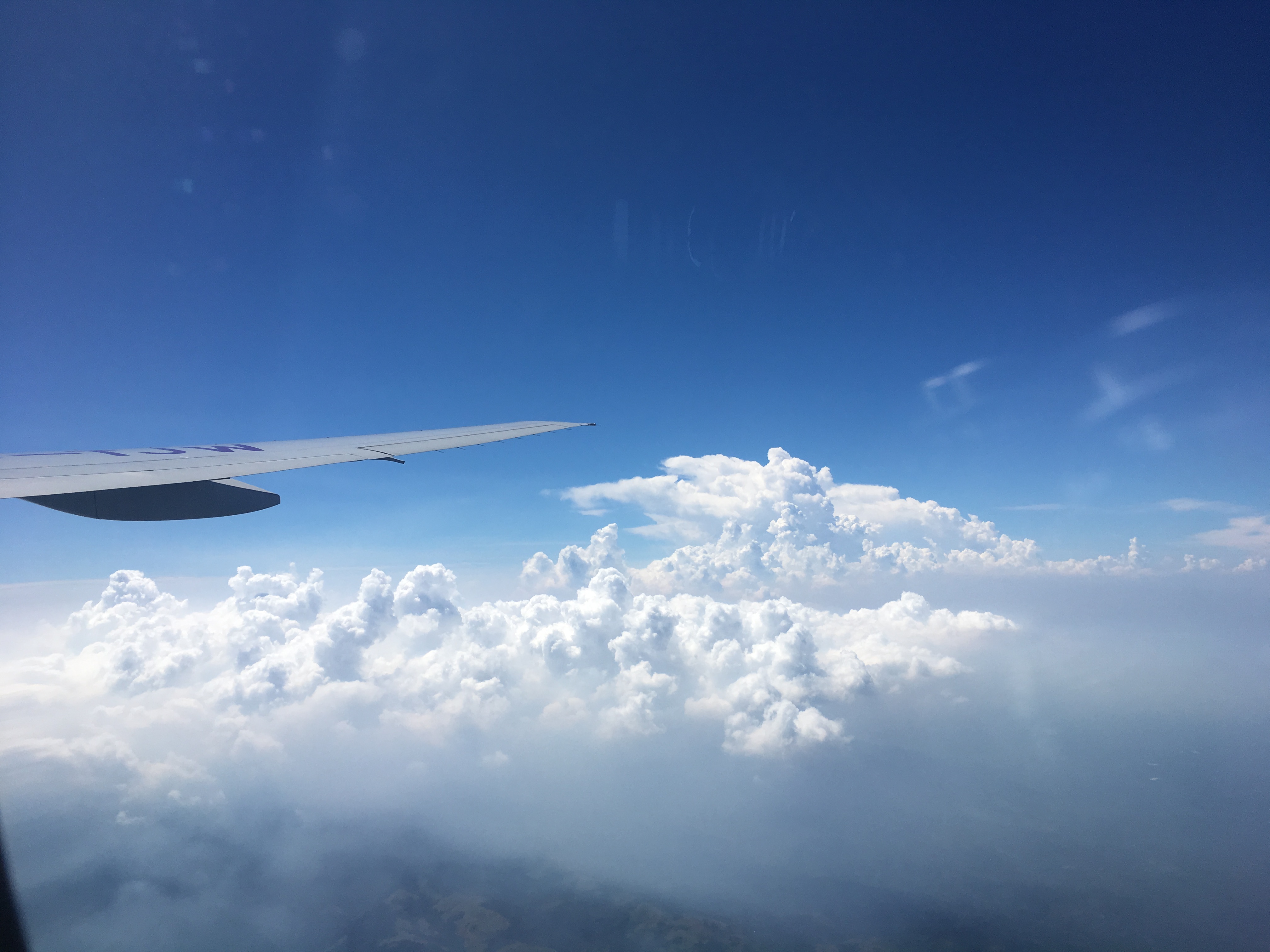 Our flight was a little past noon which was unfortunate because Manila traffic is horrible. We had to leave home before 8 in the morning for the three-hour drive to the airport. I rarely experience turbulence in flights (I often opt for red eye flights and could that be the reason why?), and we both got a teeny tiny amount of anxiety with the number of times the seatbelt sign was turned on because of it. Meal service had to be delayed a couple of times too since the flight staff needed to strap themselves in for safety. I am still not the biggest fan of airplane food – but I’ve only flown economy. Business and first class food may be amazing but I don’t think I’ll find out very soon. The meal I had had a touch of chili which should have prepared me for the rest of our meals in Thailand. I even learned how to use the Thai phrase ‘mai phet‘ to not have my tongue burn all the time! 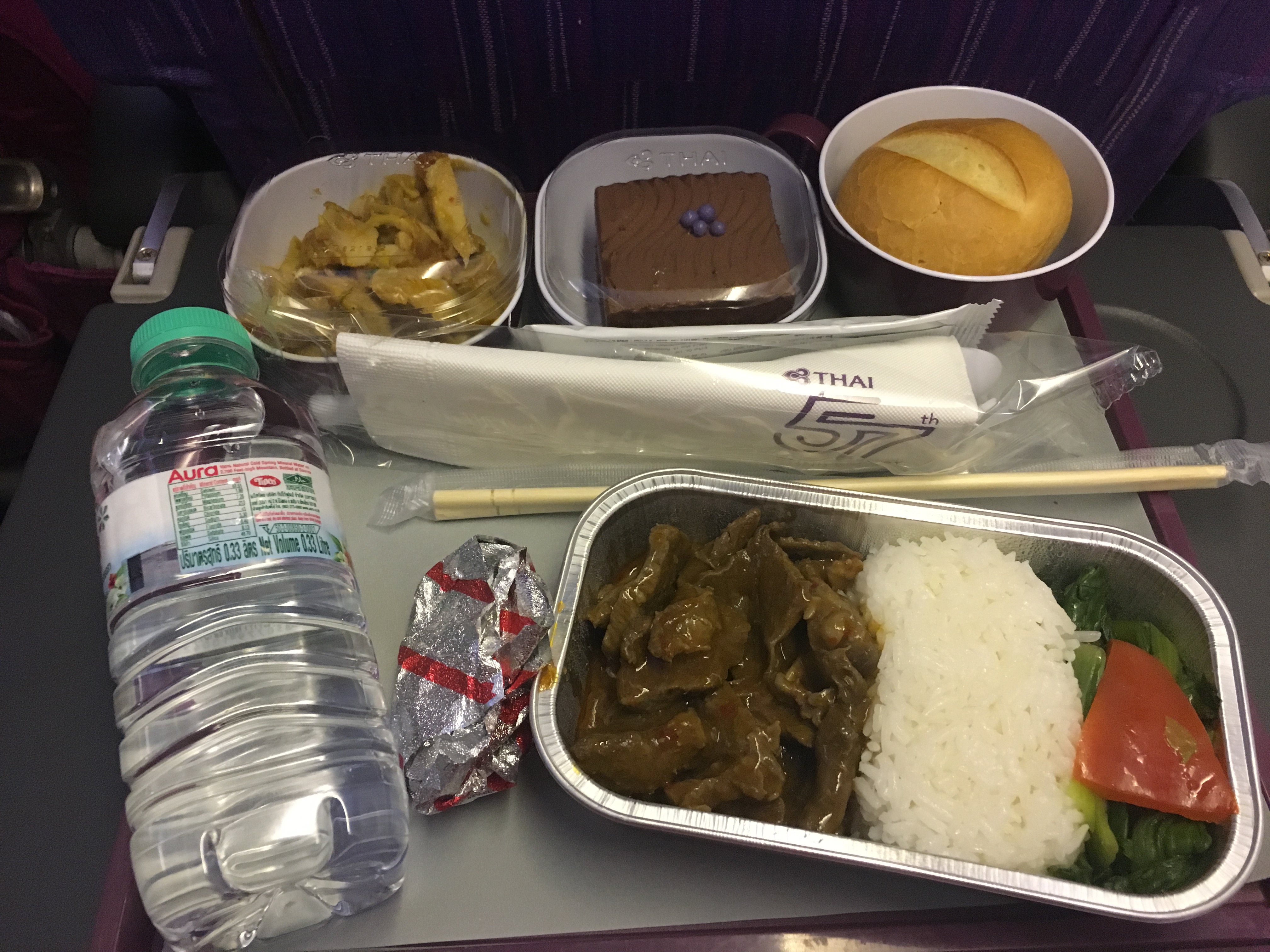 Our flight landed late that afternoon and we breezed through immigration and luggage claim. We got some currency changed at the airport before boarding a taxi to the hotel. The rates were the worst I’ve seen in Bangkok. If you did not arrange any airport pick up, just exchange enough money to get to your hotel or wherever you needed to go. We’ve noticed that there are a lot of money changers and you just have to choose among your options. What we did was walk around and check the money changers within the vicinity of our hotel and picked the one that looked the least sketchy with the best rates (buying rate for PHP at the airport was .47 and money changer near our hotel was .68). Bangkok traffic during rush hour was slightly better than Manila’s wherein it was moving and you can’t hear drivers unnecessarily honking their horns. C & I were initially contemplating on renting a car so we could drive around but we luckily did not push through with it. Driving in Bangkok needs getting used to, not only because they drive on the left side of the road, but because in some streets, they drive on both sides of a two-way street. Like I said, confusing as fuck. 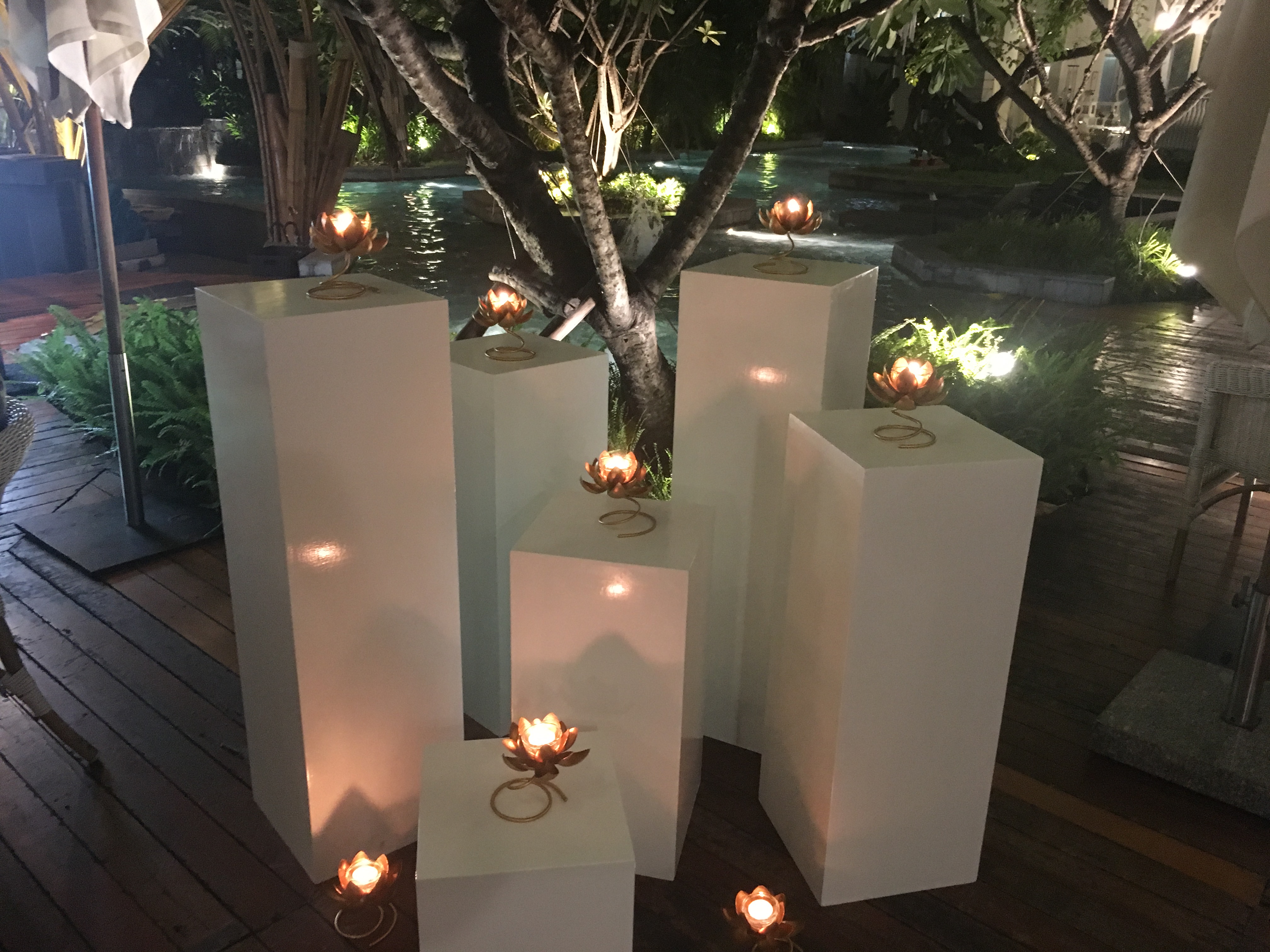 We got to our hotel at dusk and had to freshen up before we went out to find dinner. It was sweltering in Bangkok, and the weather was mostly the same as Manila. The only difference was that walking outside, it didn’t feel as though dust was being attached to you while you’re sticky with sweat. It must have something to do with all the plants they’ve installed everywhere. C even described the city as ‘a greener version of Manila’. Before we left the hotel, we had mango smoothies and a snack by the pool bar. 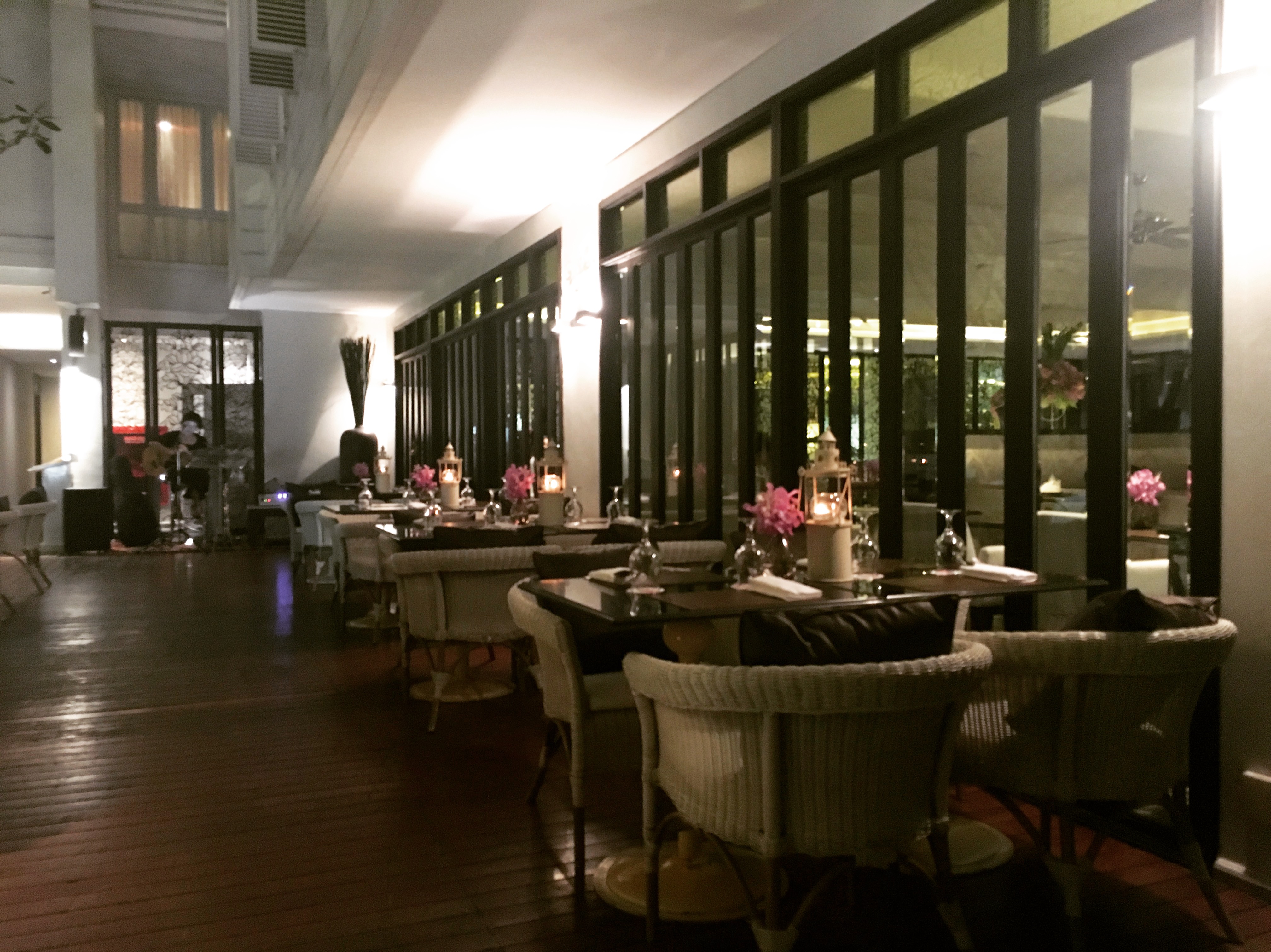 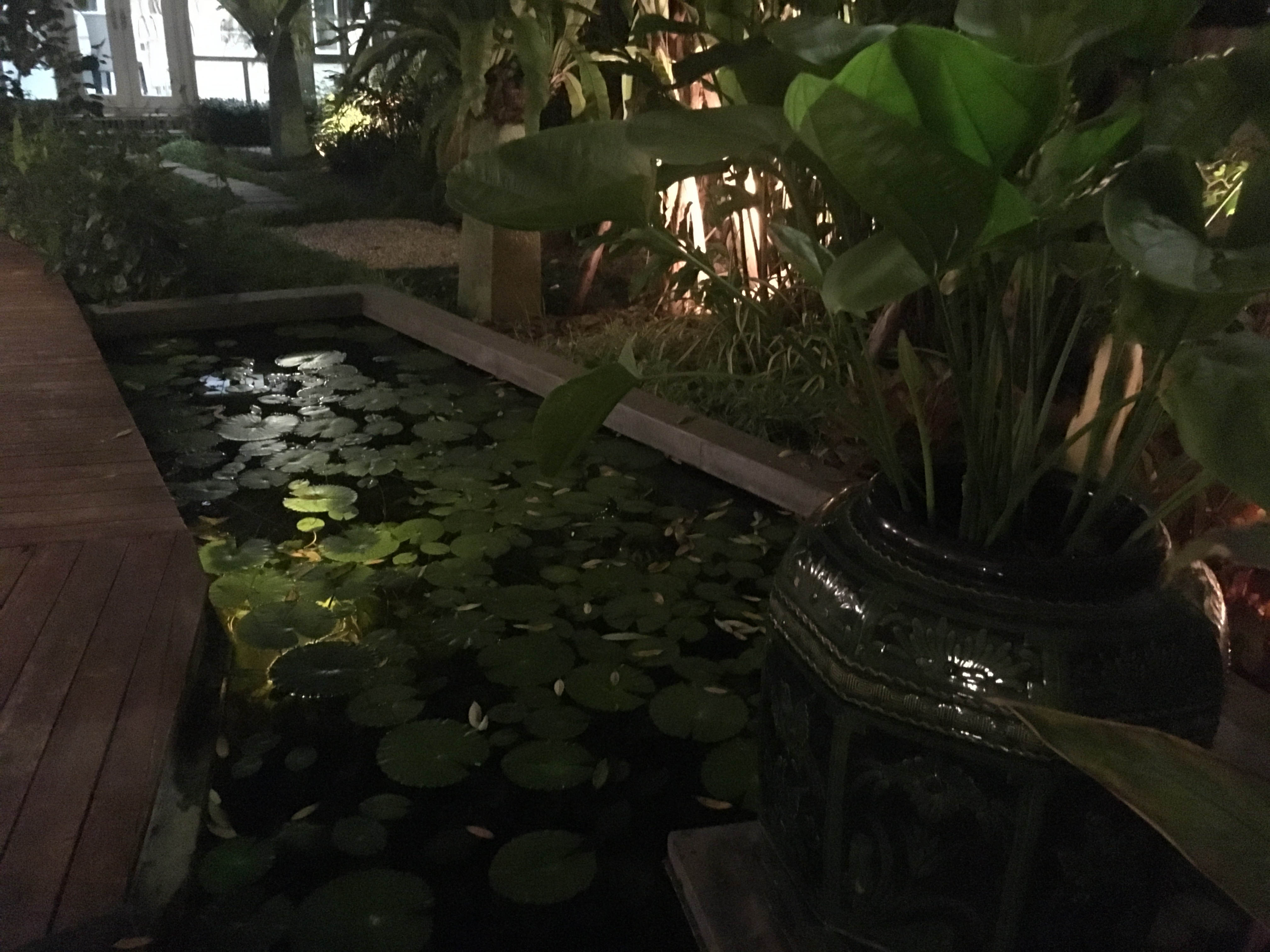 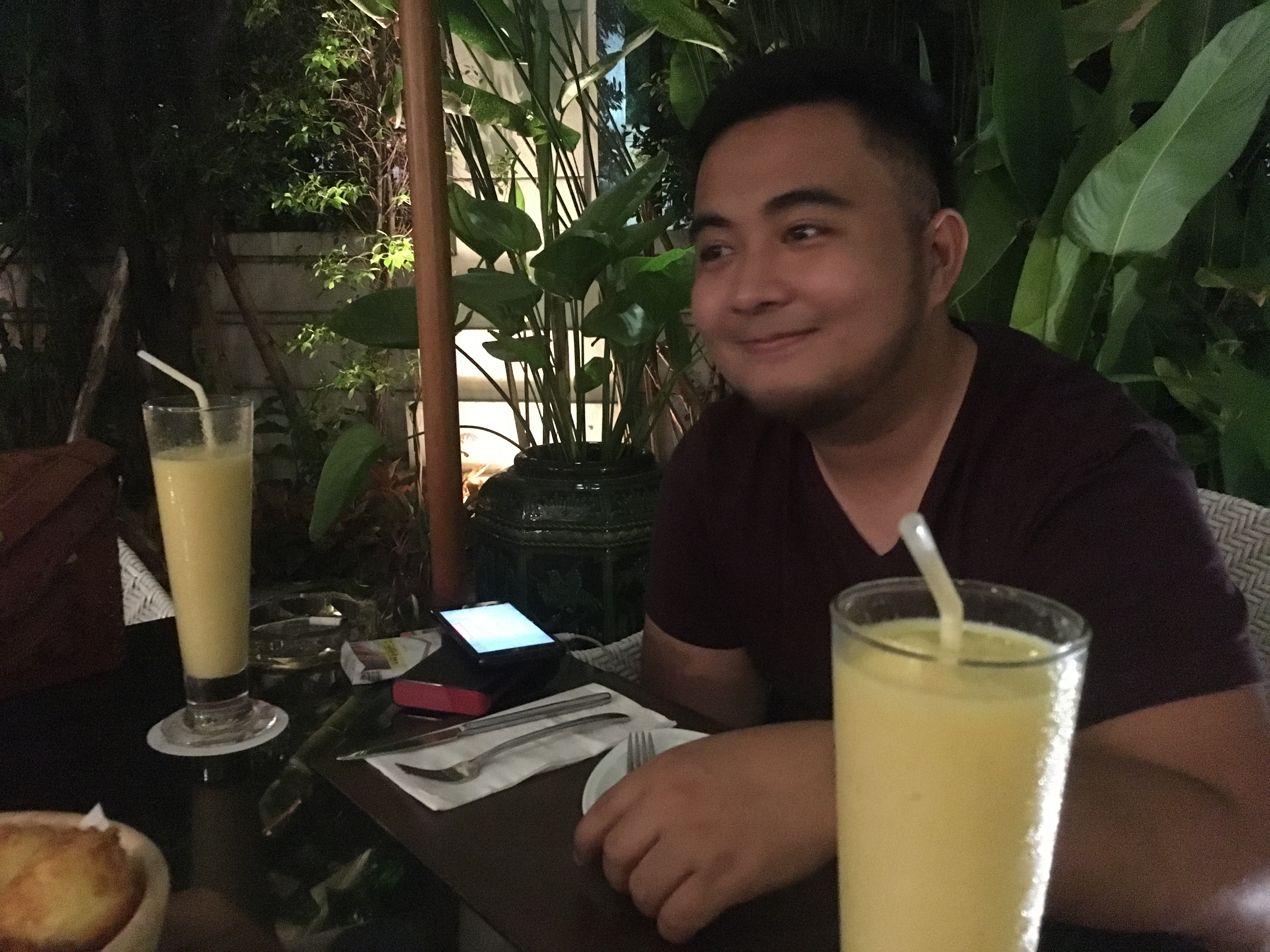 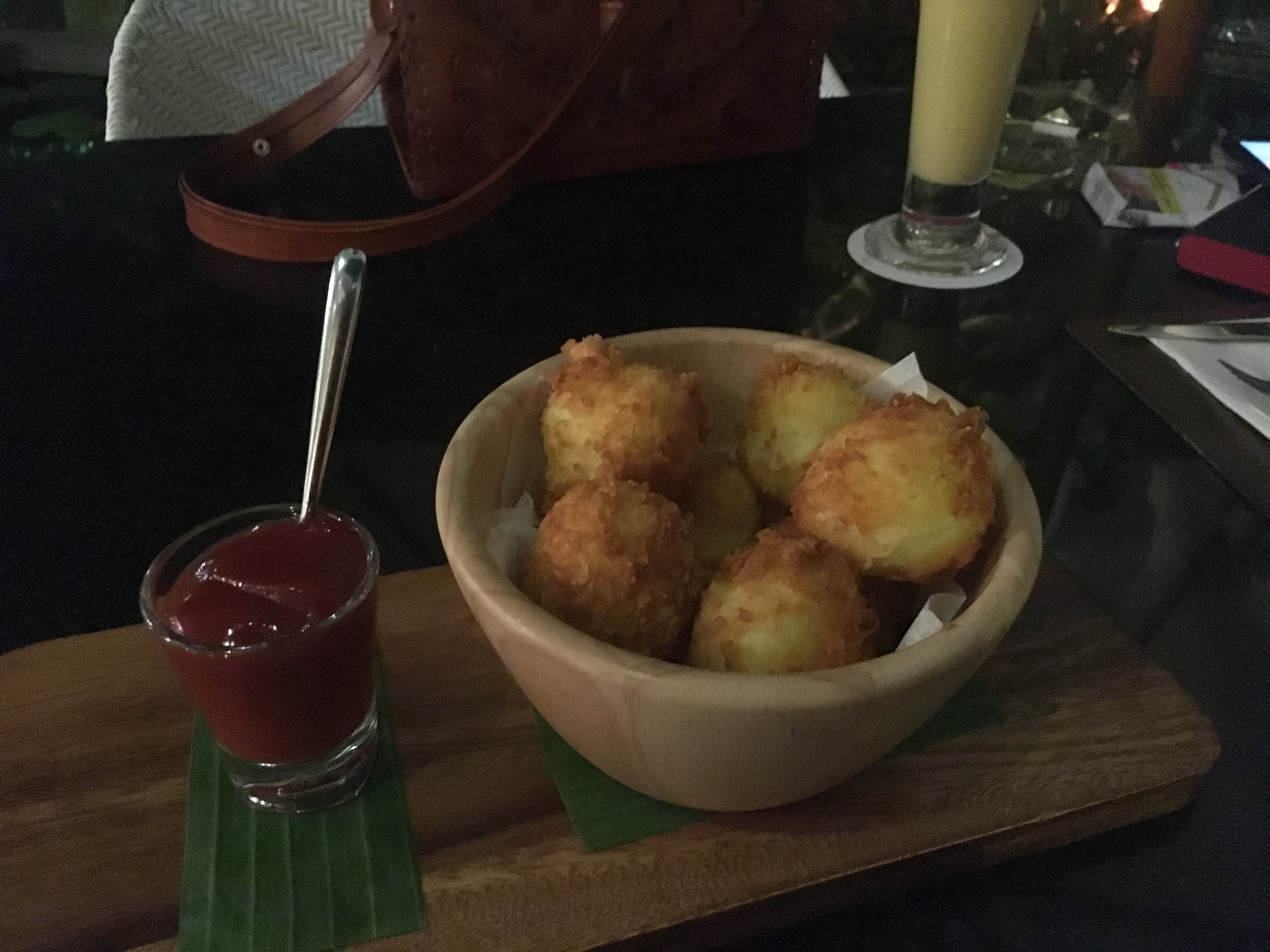 Similar to Manila, taxi drivers will try to give you an inflated fixed rate especially because you’re a foreigner. Ask for the trip to be metered and that you will pay the toll for the highway (when you’re from or heading to the airport). In our case, whenever we were going to take a taxi from the hotel, we ask the concierge if they could call us a metered taxi. This was what we did when we headed to Khao San Road where we were charged 100 baht by the meter versus the 200 baht ‘fixed’ rate we got from the taxi we hailed to go back later that night. 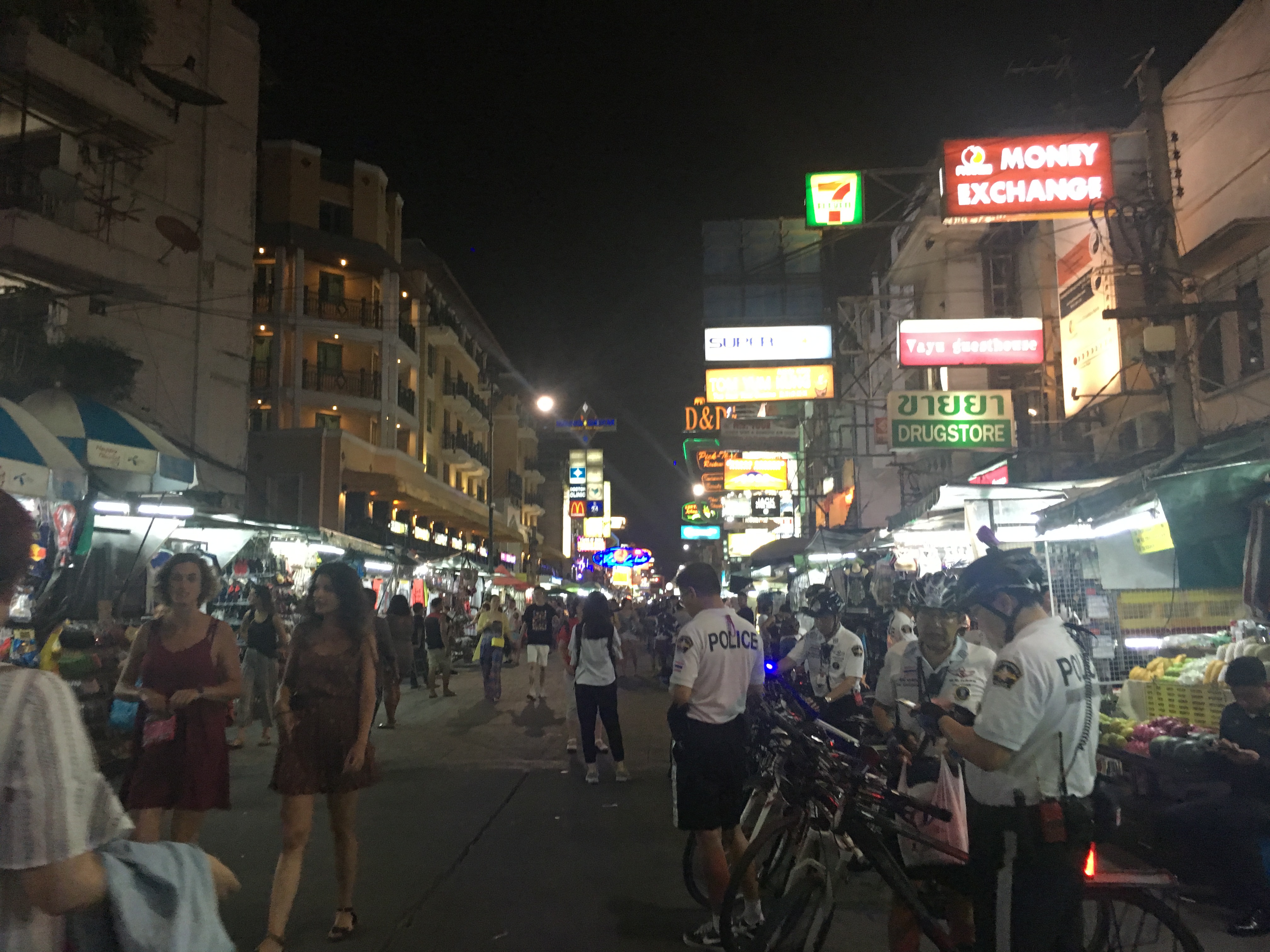 C is a picky eater so it would probably surprise anyone who has known him way before I did that our first order of business was to find Pad Thai. Chicken Boy never ate anything off the Thai cuisine until we had brunch at Dusit Thani Manila. He had his first Pad Thai there and was finally convinced to give Thai food a chance. He now has favorites! There was a variation of Pad Thai stalls along Khao San Road (most were 35 baht), and we picked one that had seats (slightly more expensive at 45-55 baht). You can actually watch them make your plate of Pad Thai. We’ve been enveloped in the aroma for so long that when the paper plate hit our table, we forgot to take photos and simply started eating. It would be safe to assume for anyone reading this that Chicken Boy ate Pad Thai once a day for the rest of this trip. He has gone a looong way from the guy who wanted to date me because I brought him to a chicken place on our first date. 🙂 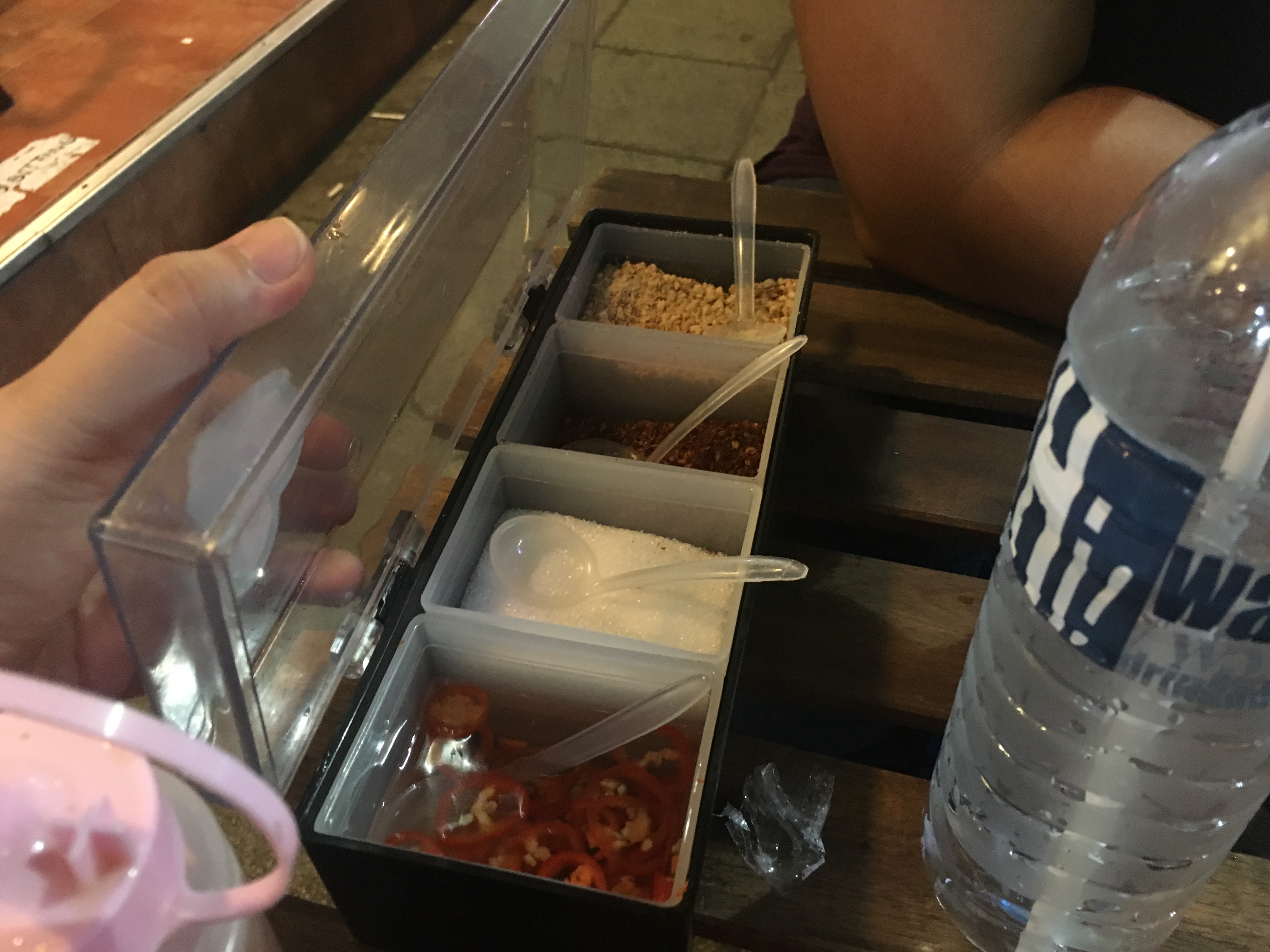 And that’s it for our first day in Bangkok! This is exactly the reason why I prefer red-eye flights, or any flight that gets you to your destination late at night or crazy early in the morning. I feel like a lot of your daylight gets wasted by traveling. 😦

Have you been to Bangkok? And have you tried driving there? Let me know in the comments below! 🙂