Getting around to writing this post has filled me with mixed feelings. I’m relieved that I finally am writing the last one for this travel series, but disappointed that I only had a short amount of time to spend in South Korea. It has been quite a ride reliving the days I spent with friends in a foreign country. I am yet to have plans to do it again, but now that I know how much fun it could be, I can’t wait to have another go at a ‘friends trip’ again!

Since it was our last day, our first agenda was to get to Lotte Mart, buy all the Korean snacks, and head back to the apartment to pack and check out. Afterward, we were supposed to head to Gyeongbokgung Palace and wear hanboks while taking more awesome photos. It was supposed to be a chill day, where we don’t stress ourselves with our itinerary and schedule. We headed to Lotte Mart and stopped by a deli where we had our breakfast. 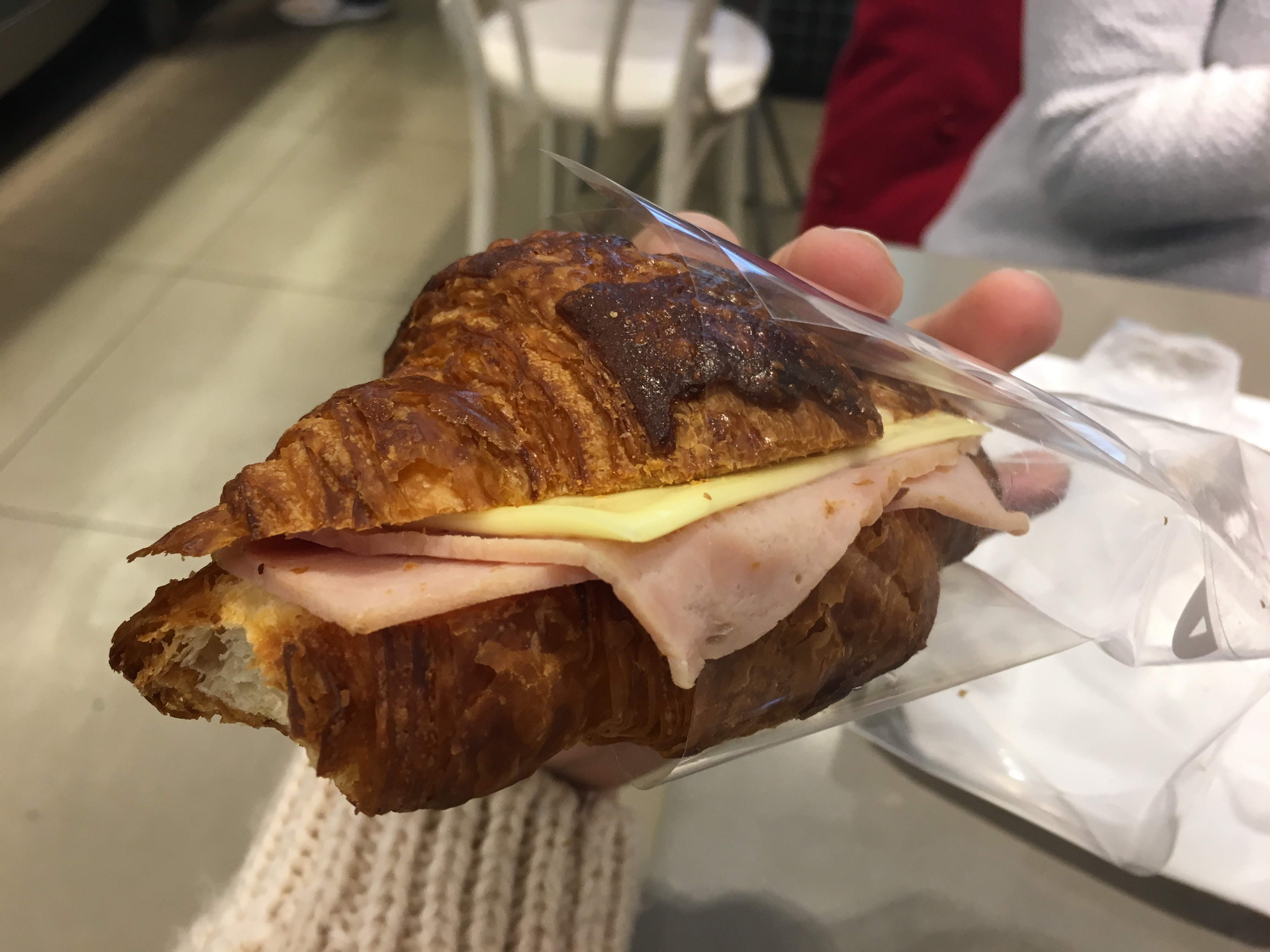 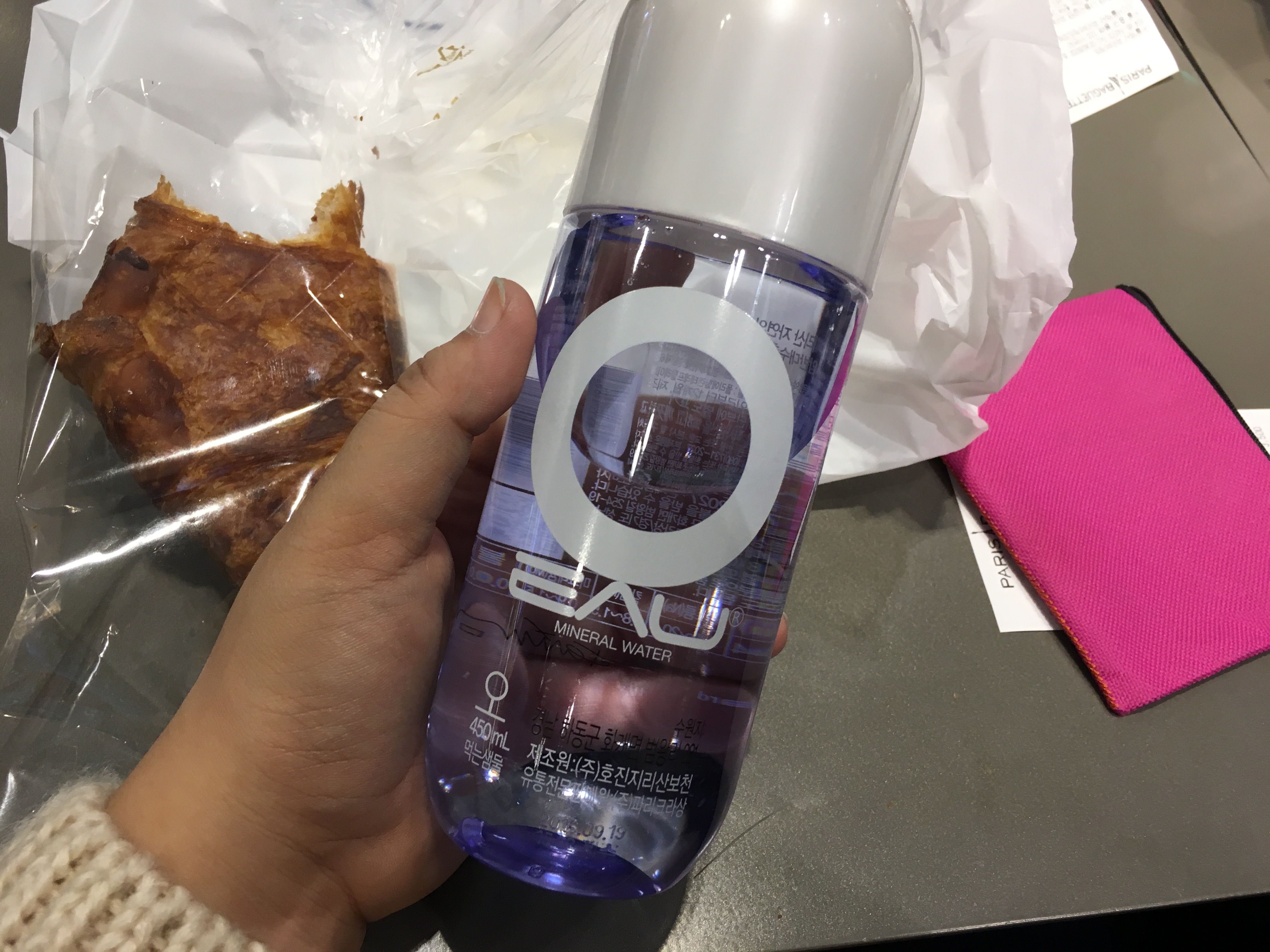 I’m unsure who among us kept attracting Murphy’s Law because when we got to Lotte Mart, it was still closed. We got confused because we timed our arrival with their opening time but we were an hour early. We were torn whether we should waste our time and wait for it to open or head somewhere else. 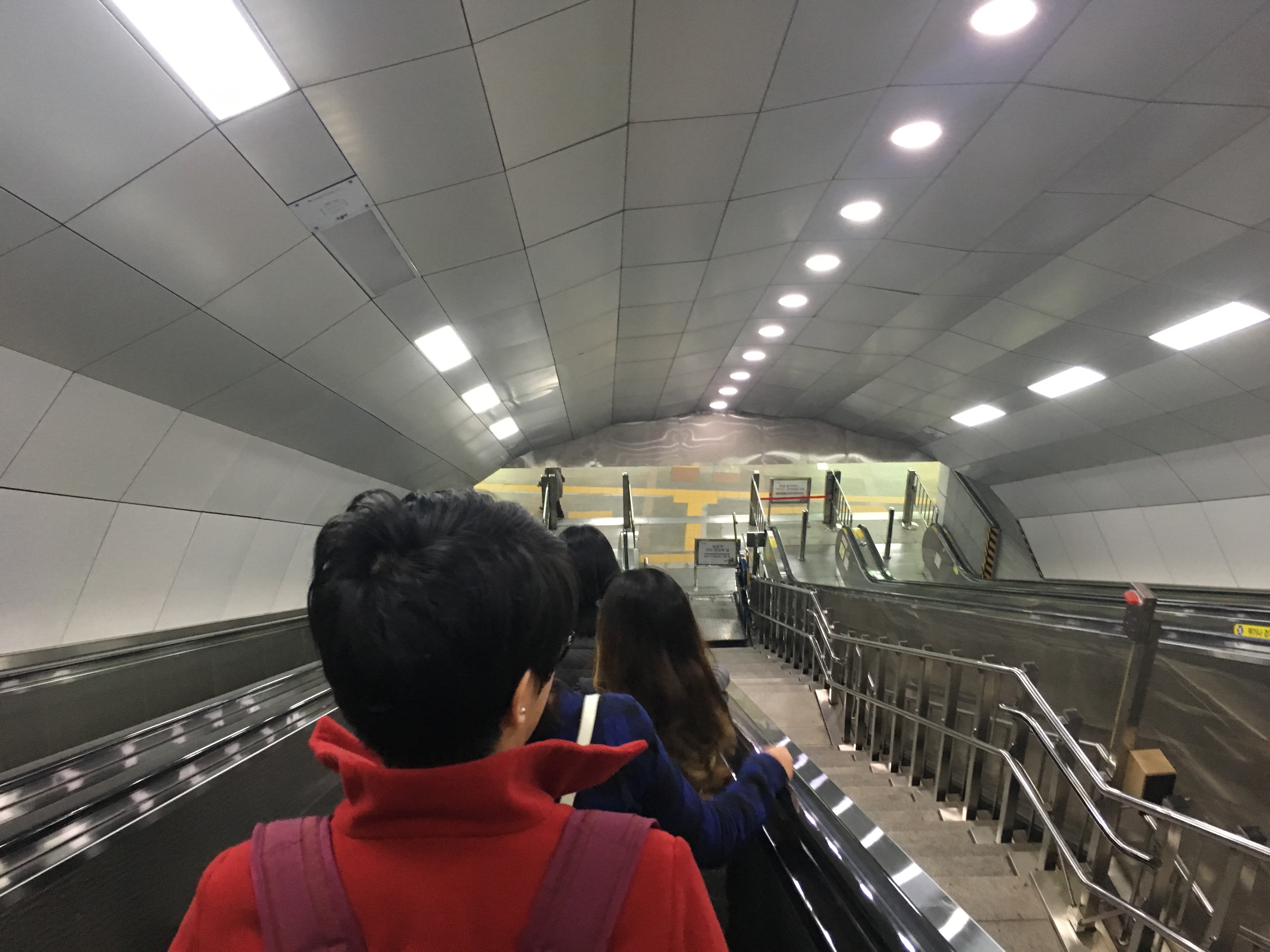 We decided to go to Insadong to burn some time until we had to go back to Lotte Mart. We’ve never been to Insadong but quickly found out that it was such a nice place to go shopping in. The streets are lined with quirky boutiques and interesting clothing stores. 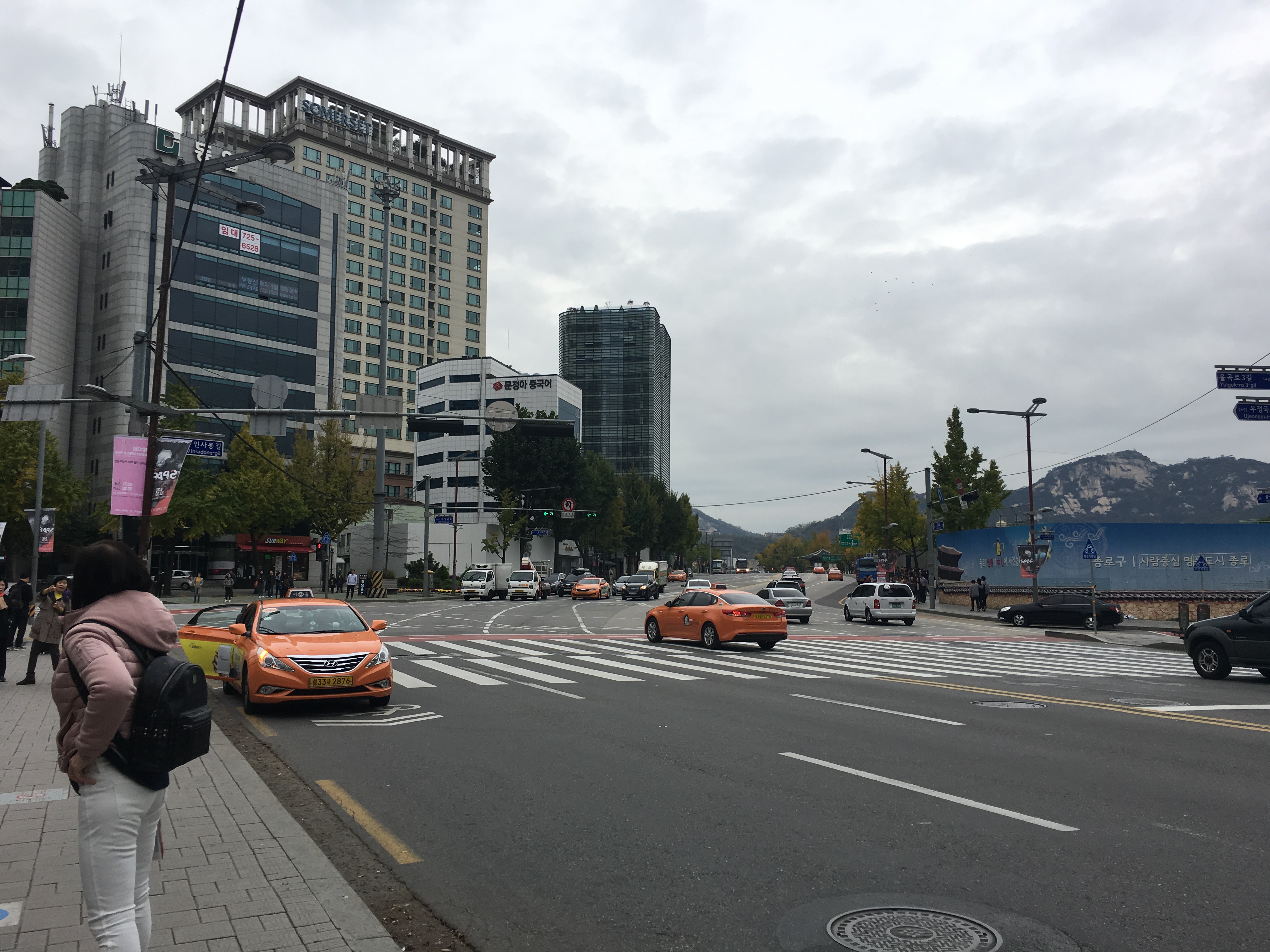 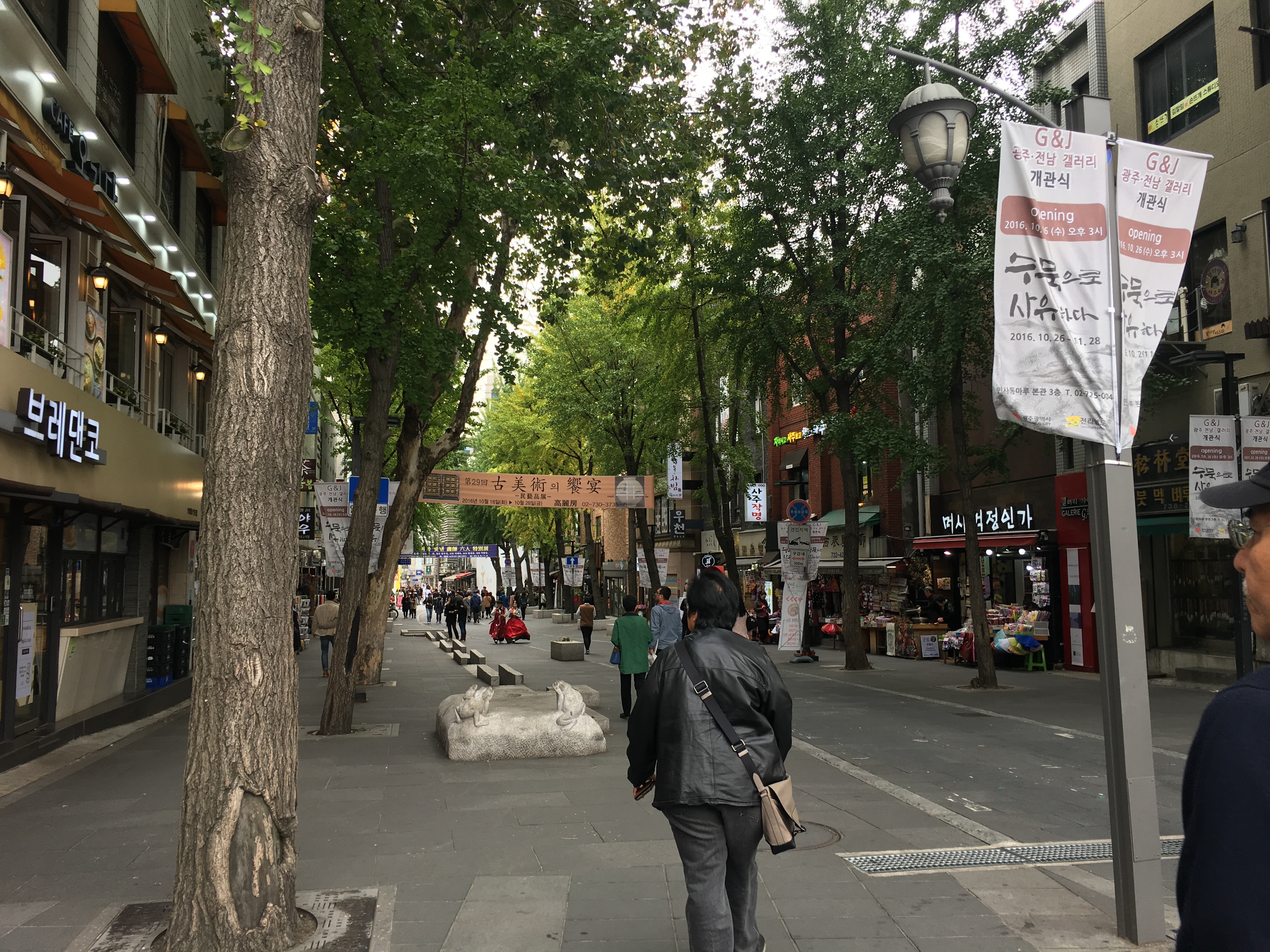 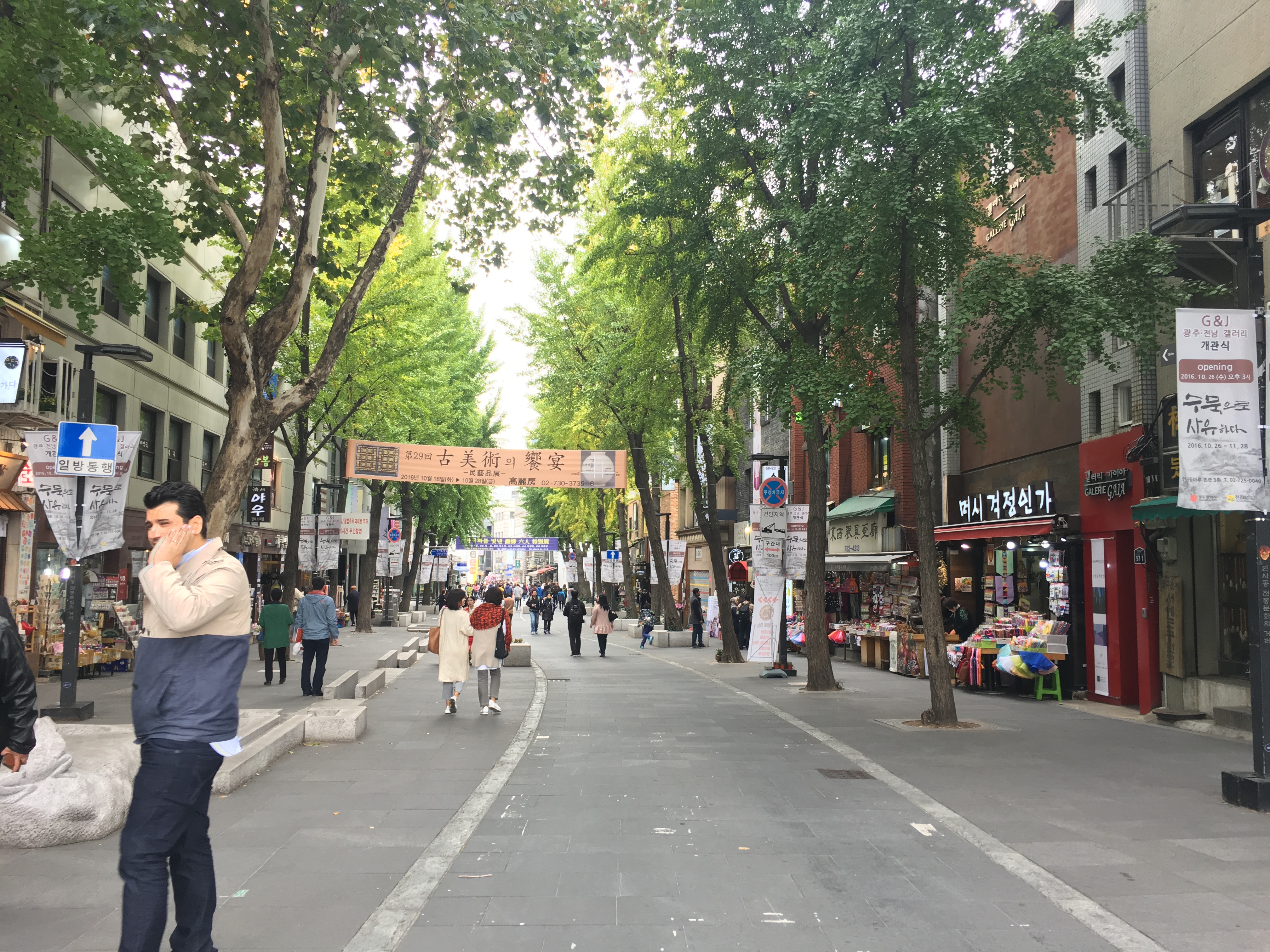 I ended up buying a circle scarf in three colors. Ha! I actually saw one for sale at Everland for 21000 won, and bought almost a replica of it (same color) for 7000 won. Such a steal if you ask me! We passed by a boutique selling vintage-ish quality bags, and the three of them ended up buying the same bag each. I did not buy one because my attention was solely on a brown leather backpack that I just knew C would like. With not enough cash in hand, I tried using my BPI card on the atm and was unable to use it. Jill was able to use hers, and I wrongly assumed I could use mine. BPI’s international toll-free number for South Korea was not working and I spent a good 30 minutes on the phone (my phone bill the next month almost made me cry), without having even talked to any customer service representatives. I swear BPI has the worst customer service I have ever encountered. Thank goodness I have another card from BDO which I have never used internationally before, and it ended up being the one that worked! 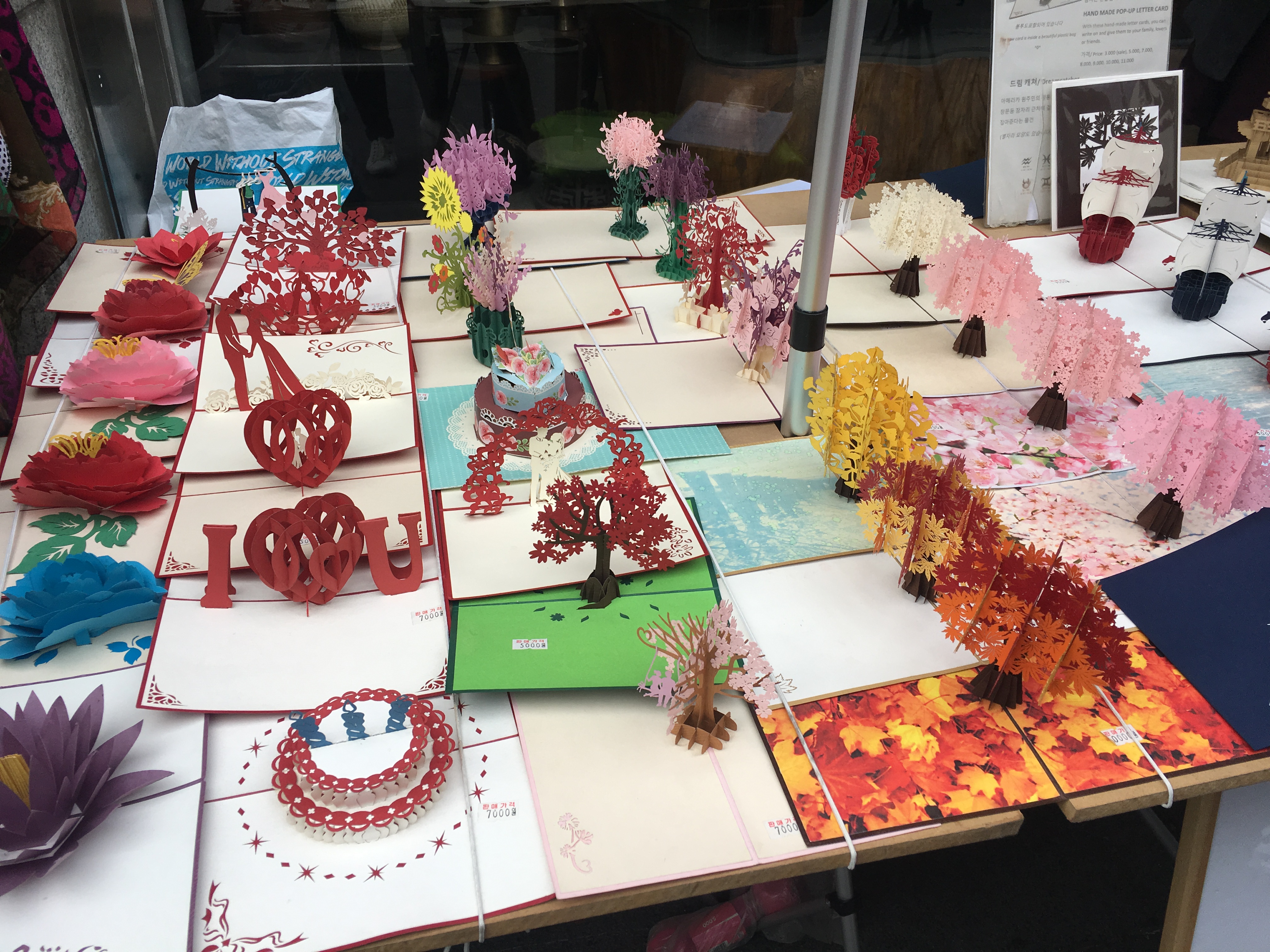 The narrow alleyways you can enter in Insadong are lined with traditional looking houses turned into commercial establishments. Most of them are restaurants, and as we were starving at this point, we simply picked one out randomly and ended up in a bibimbap place. 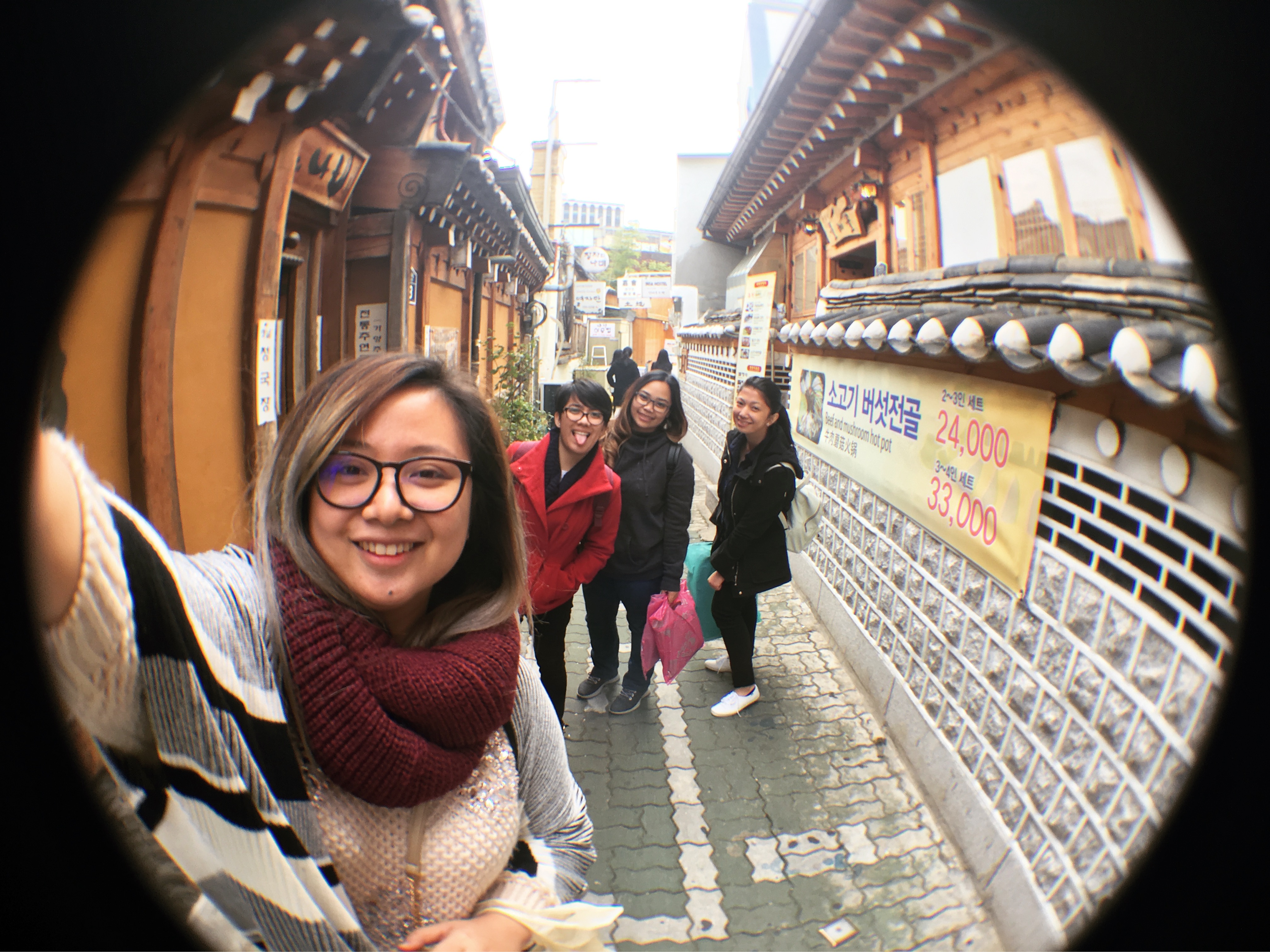 I always order bibimbap in Korean restaurants back home, and usually, do not like it. Now that I’ve tried out authentic Korean bibimbap I realize that maybe bibimbaps are just not for me. Everyone enjoyed it, but my answer remains the same, “I just don’t like it”. 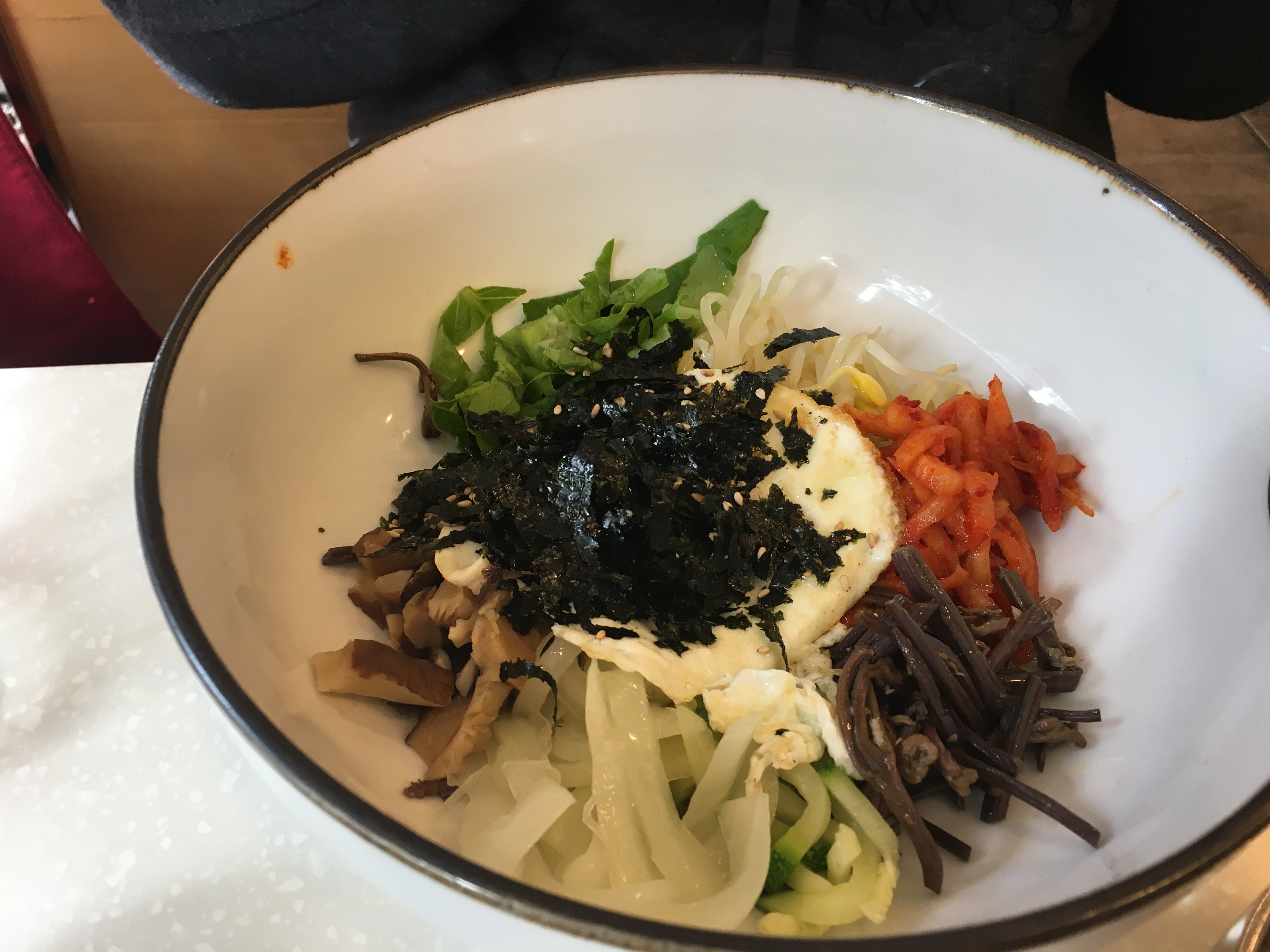 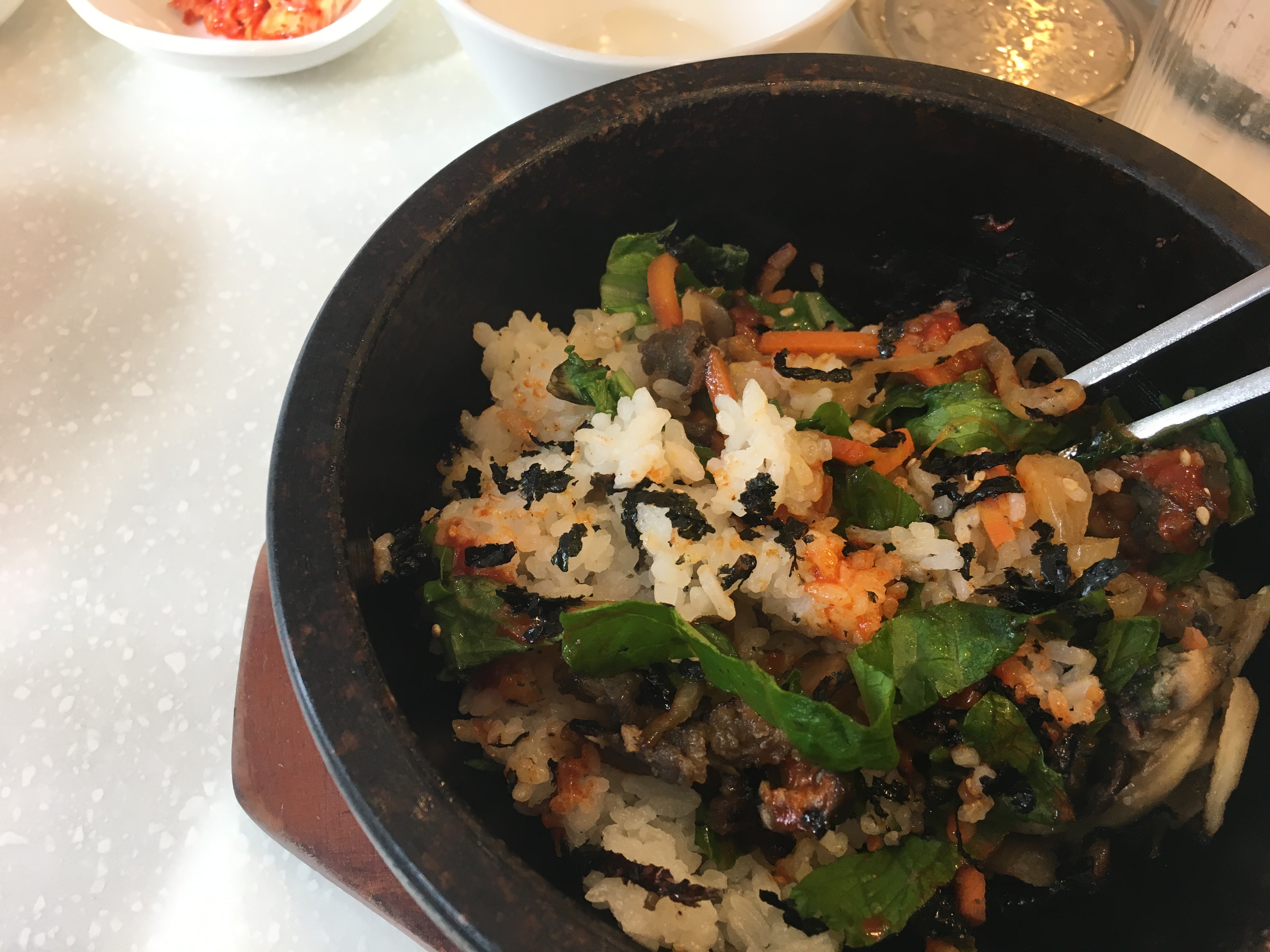 Upon checking the time, we realized that we are not doing ourselves a favor by being chill. We rushed back to Lotte Mart and literally spent a really short time grabbing everything in sight. It was like we were grocery shopping during the holidays, or if you’re Pinoy like me, grocery shopping the day after a big storm rolled in. To strangers, we may have even seemed to be panic buying. In a sense, we were, because the password to our door will reset in less than two hours. In order for someone to make it to our check out time, Sean volunteered to go ahead and secure our things while we were still dazed from the crazy shopping spree that happened. Alas, Sean took the wrong train and we even got to the apartment before she did. Packing our stuff was quite a feat, given that we. bought. too. much. Too much. 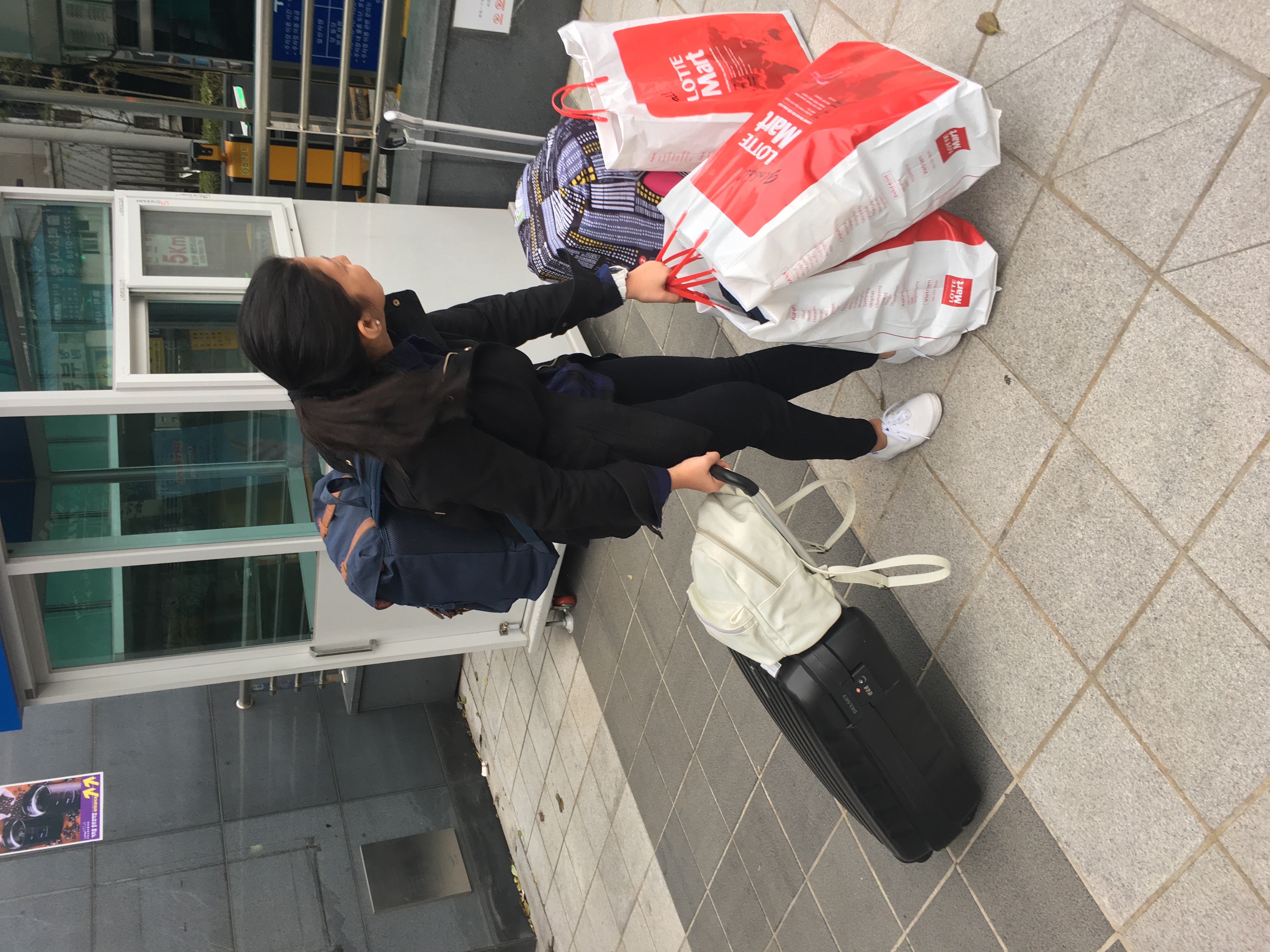 We were flying late in the evening, but the airport was more than an hour away. We didn’t get to grab any bite to eat before boarding the airport-bound shuttle bus and utilized the cafes at the airport instead. Of course, I had more Korean food! When in Korea, do as the Koreans do. 😉 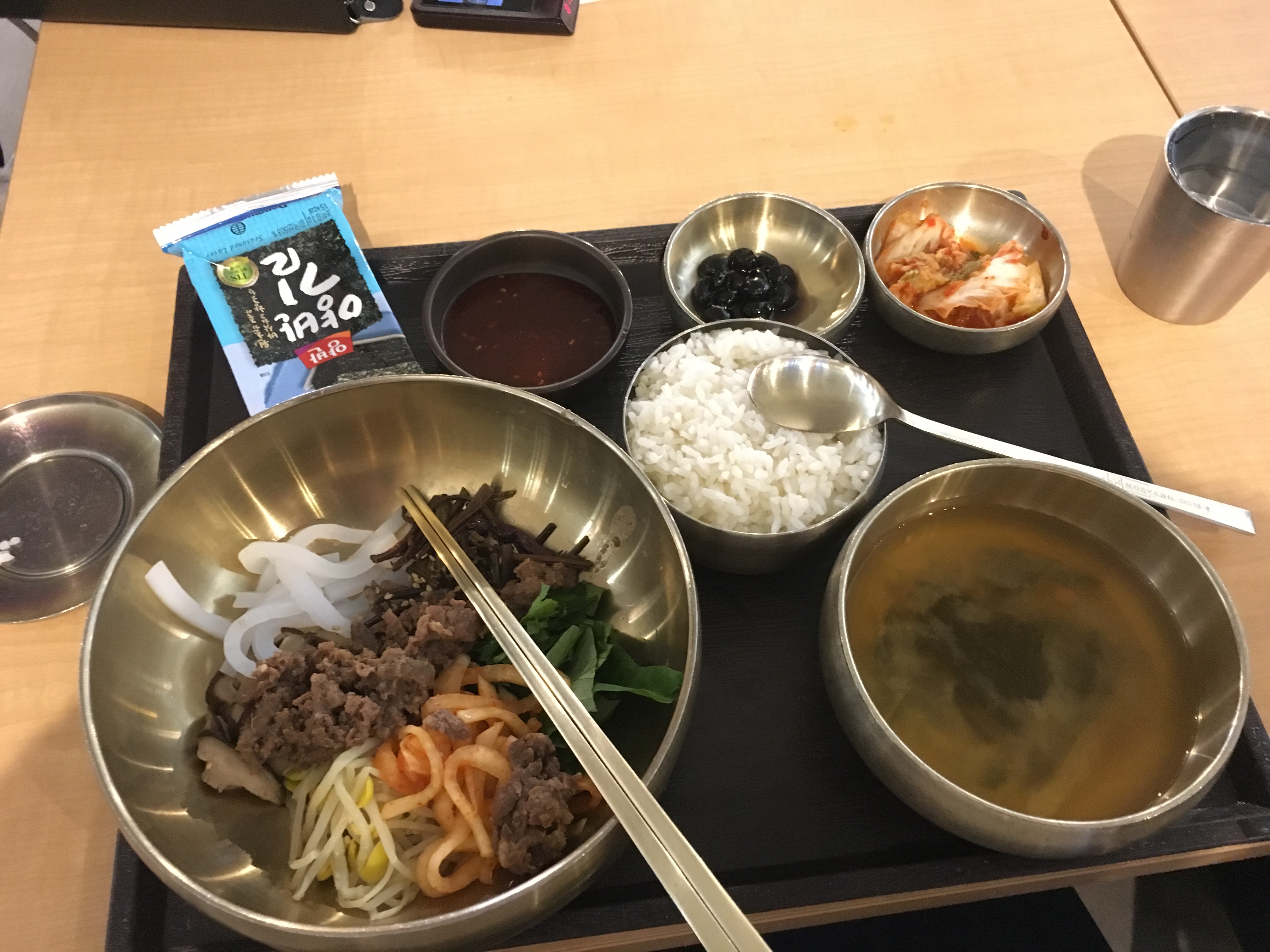 As usual, flying via Cebu Pacific got unpredictable. You never really know if you’re going to fly out according to schedule or not, and in this case, our flight was again delayed. This is the reason why I avoid this specific budget airline like a plague (I’ve flown with Jetstar a couple of times, and it was always on time). Ugh. 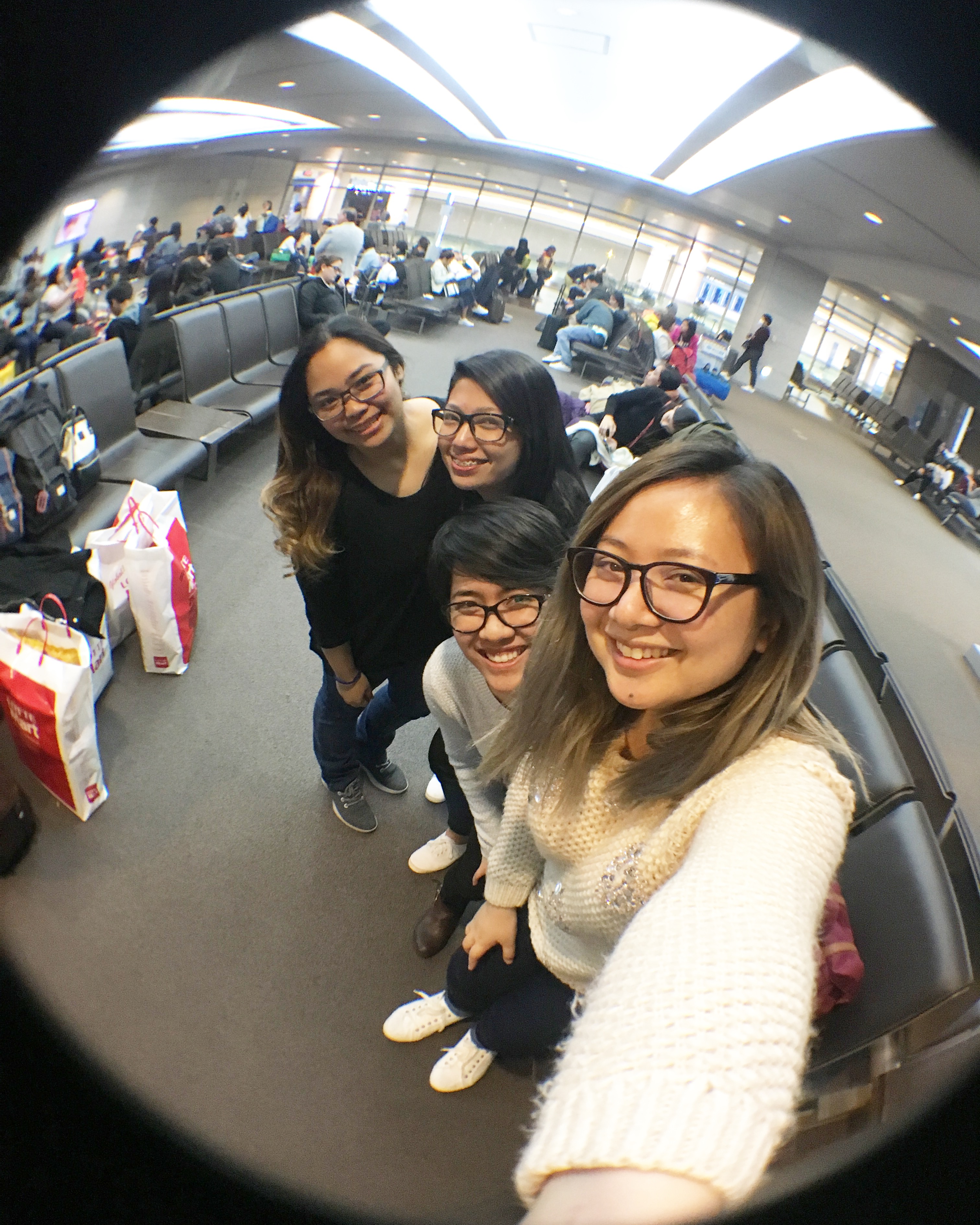 And I guess that’s it for last year’s Korea trip! I am actually aiming to go back to Korea maybe sometime in 2018, or even this year if budget permits, but let’s see! This was also the first trip wherein I actually made a conscious effort to vlog while talking to the camera. It really took a lot of [thick] skin to get it done, and I must admit that vlogging is no joke. Let me know what you think about it, and if it should be something I stick to doing during trips! 🙂

NOTE: I had fallen asleep while writing this post down and there were parts I typed in while half awake (honestly, it would be mostly sleeping). Please do leave a comment below if you find any grammar/typo errors. Thanks, everyone! 🙂