I think one of the “secrets” of staying in a relationship is knowing that your relationship will eventually hit rough spots. Life happens, you’ll fall into a rut, and, the relationship as you know it dies. While the core of it will still be there, only a few things will always stay the same. That “spark” will not always burn bright nor be present. And the thing is, choosing to stay will mean repeatedly rebuilding your relationship using the hard times to make your foundation stronger. I say that because all these years of traveling and spending time together, C and I have managed to find a point where we’re both happy with ourselves and with each other. But this day in South Korea really tested our relationship (in hindsight we both knew we were good, but at that moment, we really thought we were going to break up in Seoul lol). But more on that later!

Since we knew that we needed to be early that day, we bought breakfast we could eat the night before. C and I’s system is I cook and he does the dishes, or he buys take away and I do the dishes we eat them in. We had SPAM and eggs with rice, and cooking the SPAM to be crispy was taking a bit of time and according to C, we were already running “late” so it wasn’t as crispy as we both wanted. Oh well. 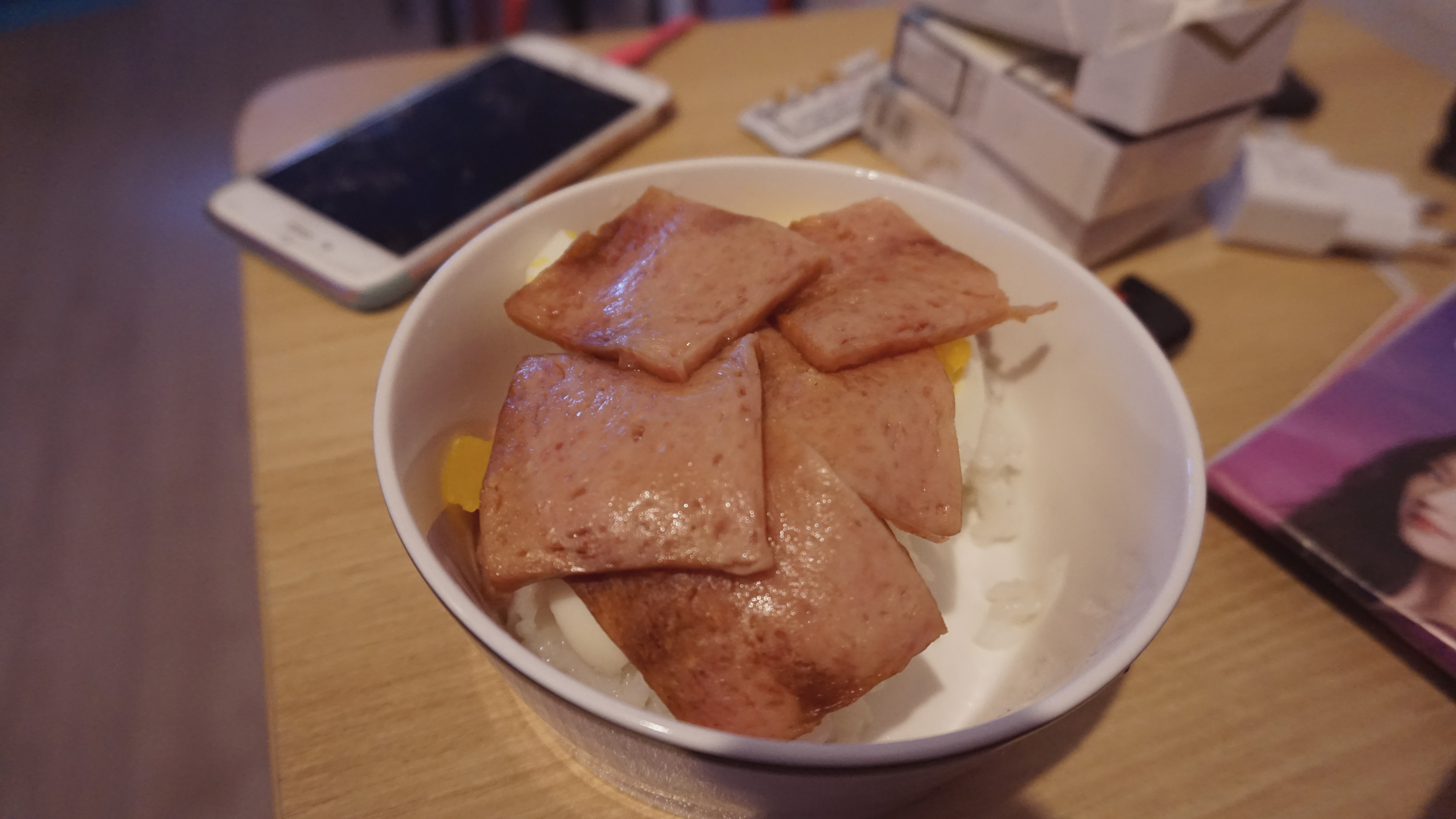 C has always been a punctual person, and every time we’re together, you can definitely expect me to be on time. Haha! We ended up getting to Euljiro 1-ga station an hour early than our pick up time (I mean, we could have spared a few more minutes to get that SPAM crispy okay). We went to the Starbucks in front of the bus stop to get some coffee and when we saw the buses start arriving, we headed back out in the cold (it was -17 that day which was not the best temperature to be waiting outside) and approached a tour guide from KLOOK (SIMILAR: Bears Town Ski Resort 1 Day Ski/Snowboard Package). While I was showing the guide the voucher I had on my phone (another side note is that I try not to print anything as much as I can to try and be environmentally friendly), when C asked me to pull his hood up over his head.. so I had to fumble with a cup of coffee and phone in one hand with my glove off, and another hand trying to help him with his hoodie. The cold has made my hand numb that I heard my phone hit the ground even before I realized that I dropped it. I drop my phone a lot so I make it a point to purchase expensive tempered glass for protection and didn’t mind the shattered tempered glass until I saw that it was my actual phone’s screen that cracked. At the time this happened, I just quit my job and didn’t have a payslip in sight for the next two months so I was pissed. C can tell because I get eerily quiet when I’m trying not to snap at people, and went out of his way to try to calm me down. I couldn’t even focus on the scenery because all the windows got frosted and you really couldn’t see much. 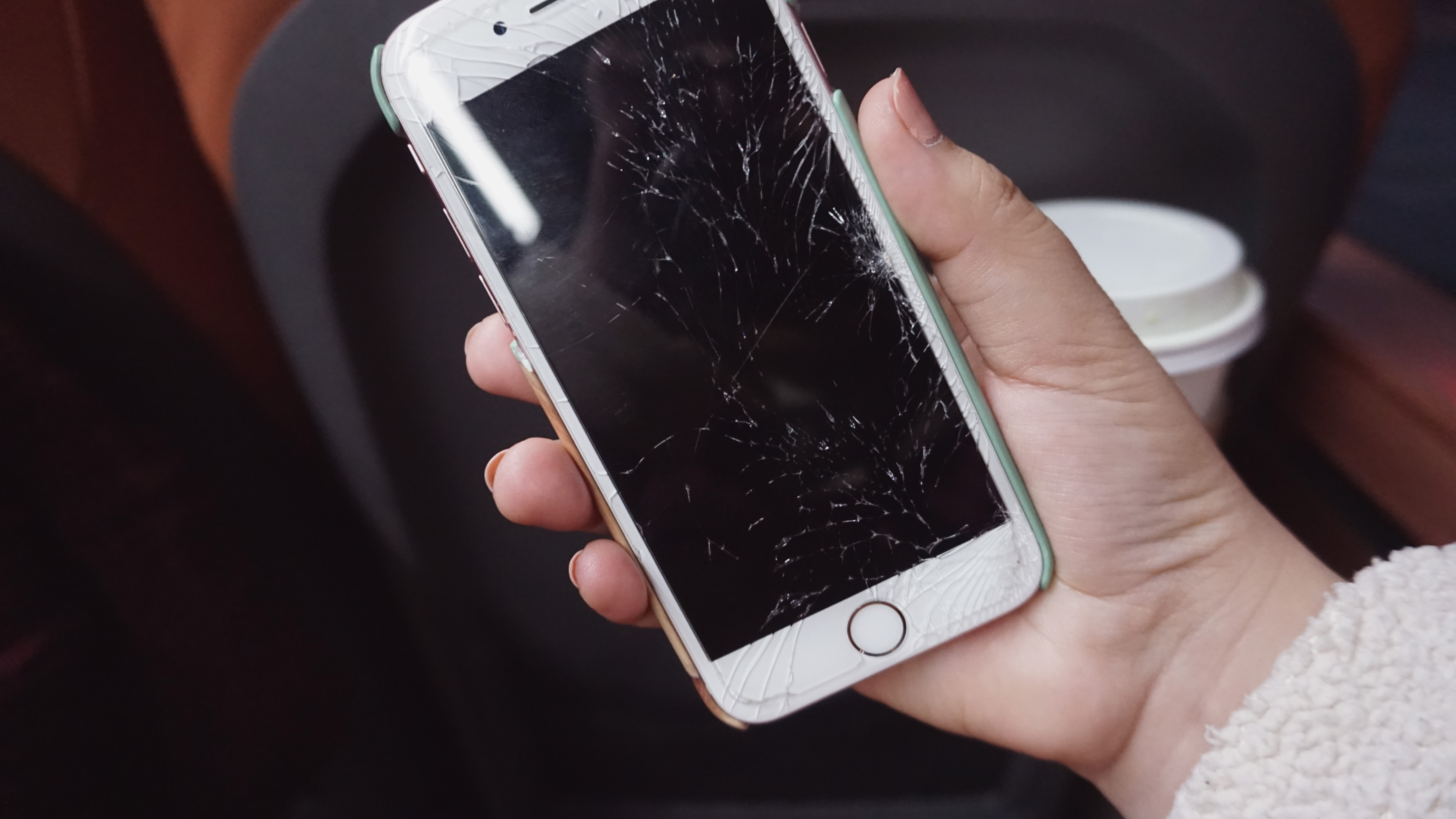 Since ski clothes and ski equipment was included in the tour we booked, it was quite hassle-free to retrieve said items. Lockers have a fee though, so we had to pay every single time we opened our locker. We didn’t realize how hard it was to move around in ski clothes, how difficult it was to wear ski boots (and adjust them to not cut off the circulation in your legs), how heavy skis were, and how hard it was overall to ski in general. We had a heated argument in one corner as we both struggled with the equipment. I had some spill over frustration from dropping my phone, and I really just wanted to return everything back and just hang out wherever while C continues skiing. However, C insisted that I at least try it out (and I’m grateful that he did), and I ended up tumbling down the beginner’s slope AND taking down a couple of kids down with me. It was super embarrassing, and to top it off, I couldn’t take off the skis and unable to stand up.. until someone stumbled near me and helped me up. I’m really not a huge fan of any sport or any athletic activity lol. 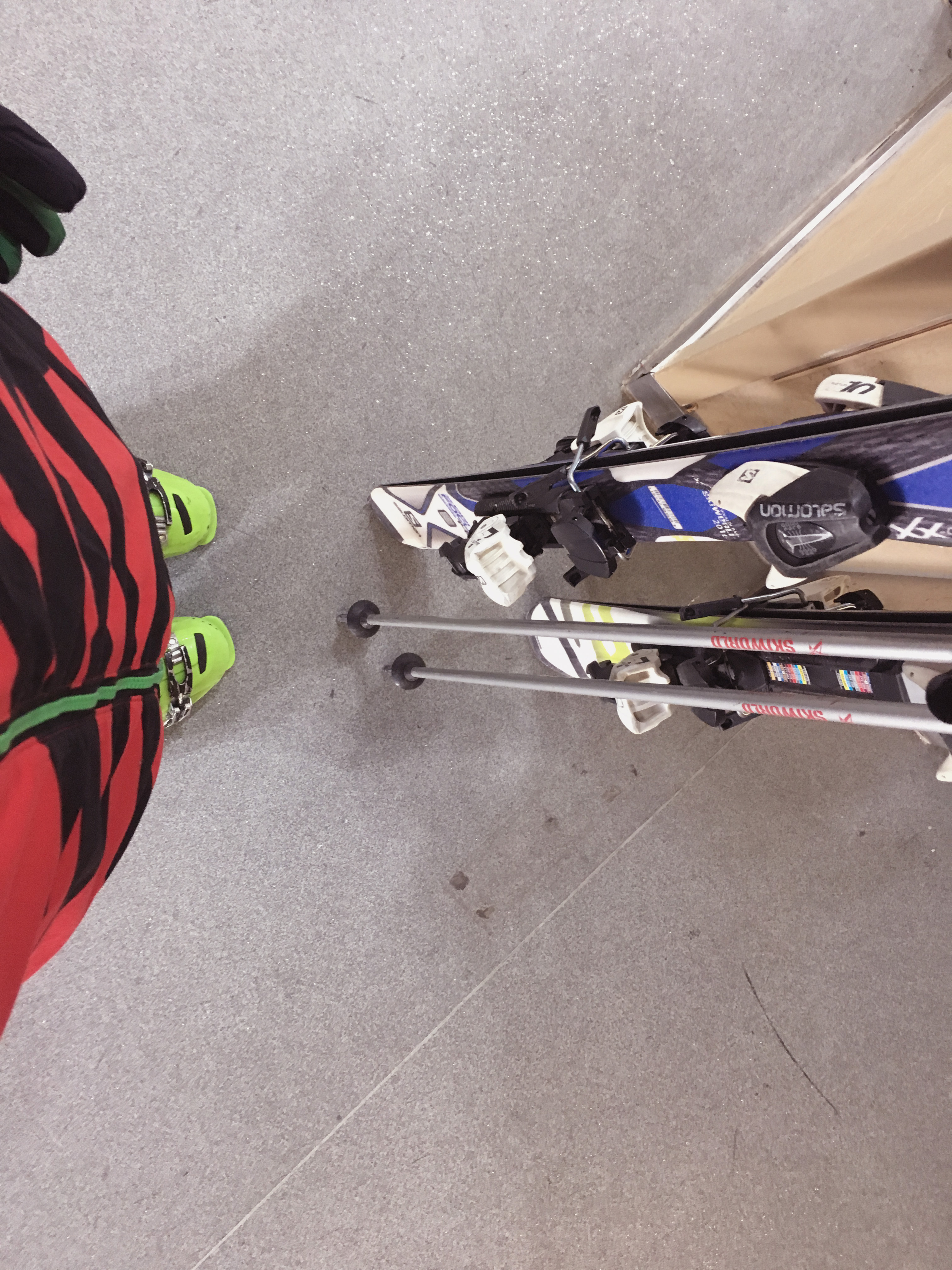 C is much more athletic than I am and was waiting for me at the bottom of the slope, and I was still seething. He convinced me to have lunch first (climbing a flight of stairs in ski boots is NOT something I’d recommend to anyone who doesn’t ski regularly) before I return my ski equipment. While there were a couple of food choices in the ski park’s food court, it was packed and we just bought food from the one with the shortest line. My temper had cooled down a bit when I finally ate and had some rest, so I was ready to give it another shot. 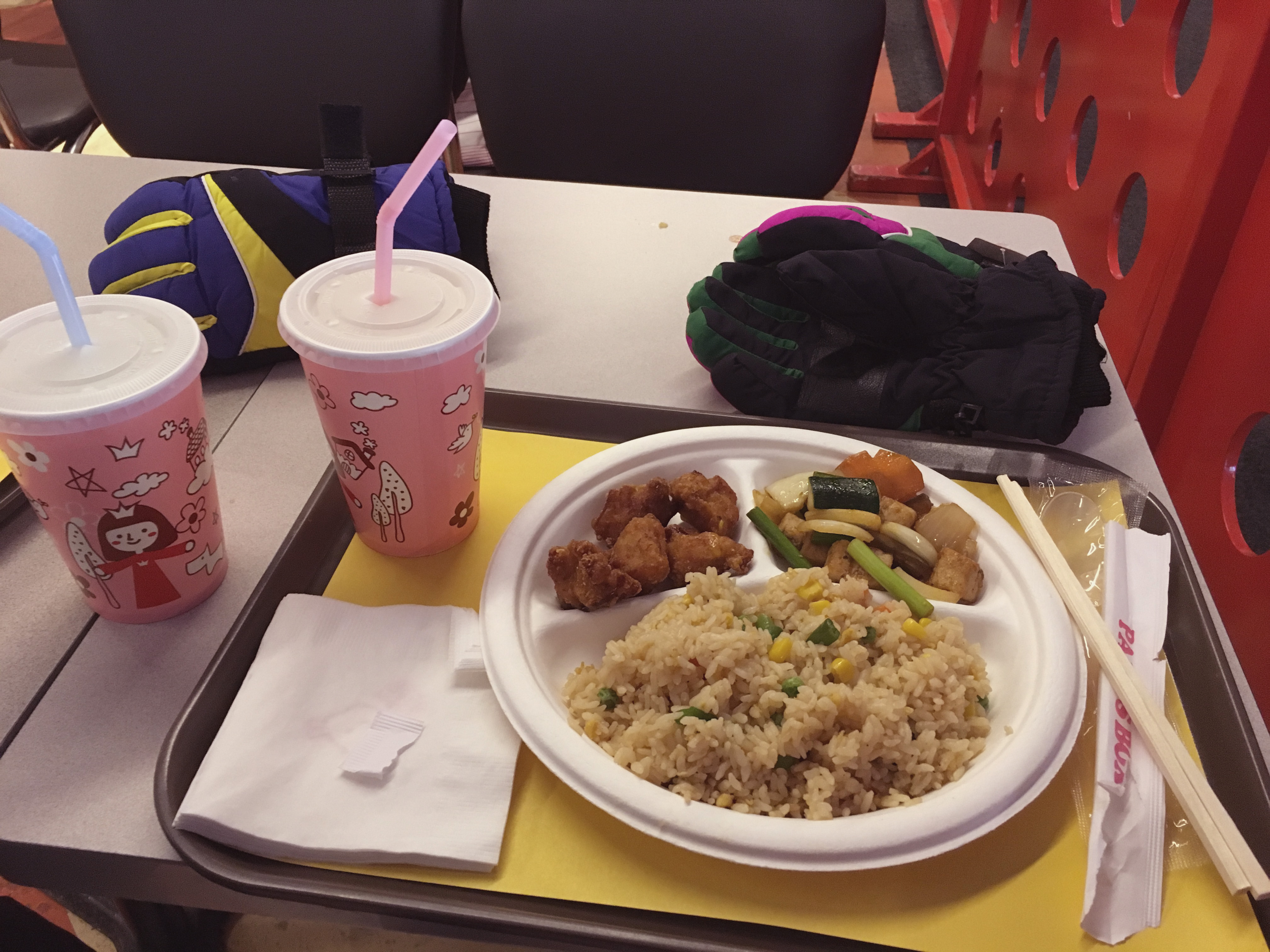 Fortunately, after having lunch, the day started to turn around for me, and boy, was I glad C didn’t let my temper ruin the experience for the both of us. We conquered the baby slopes and got to ski without hitting any more children. It was so much fun that before we knew it, it was time to head back to the city. Being able to ski down the slope without falling was such an exhilarating feeling that I went from “never doing this again” to “where should we go skiing next”. 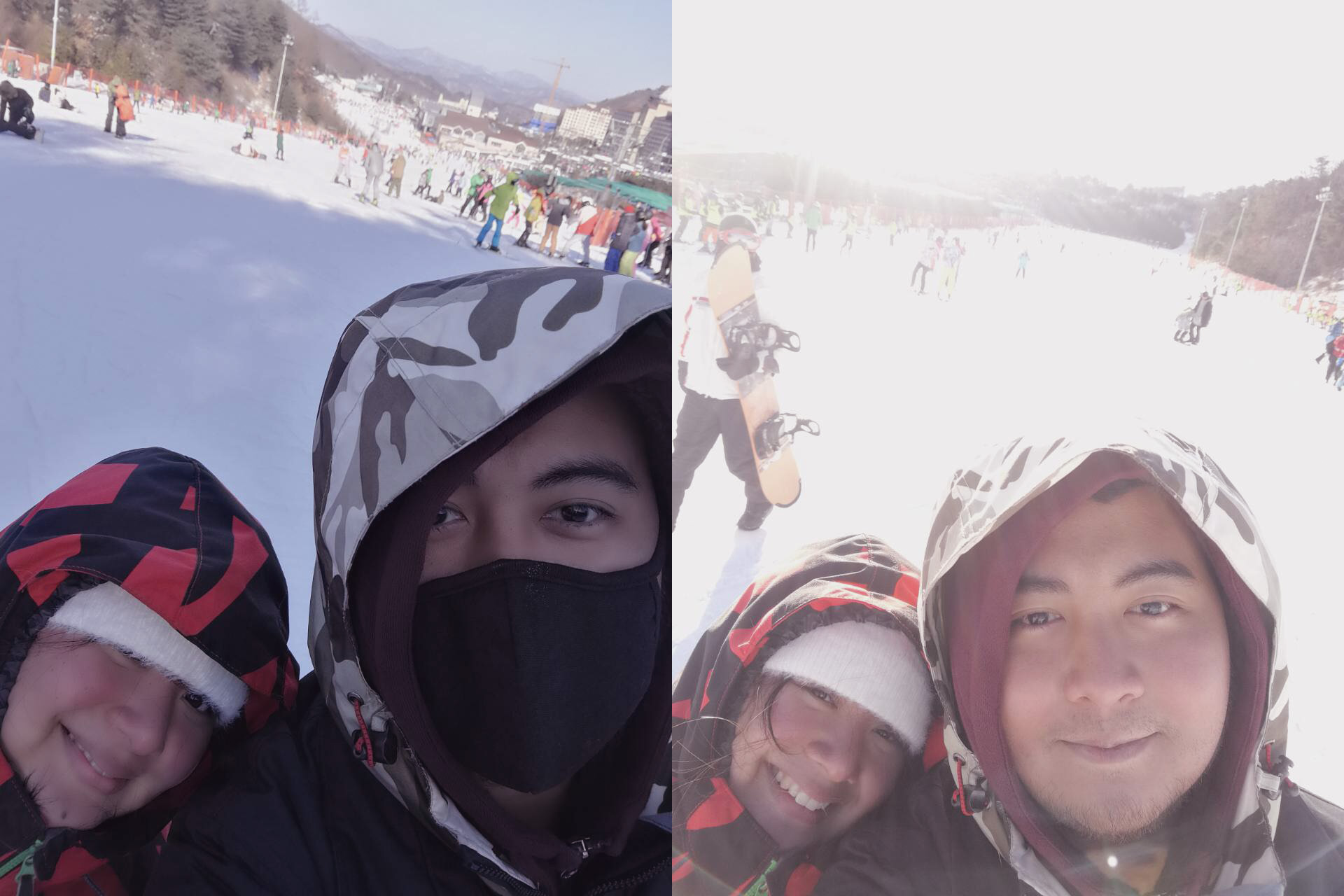 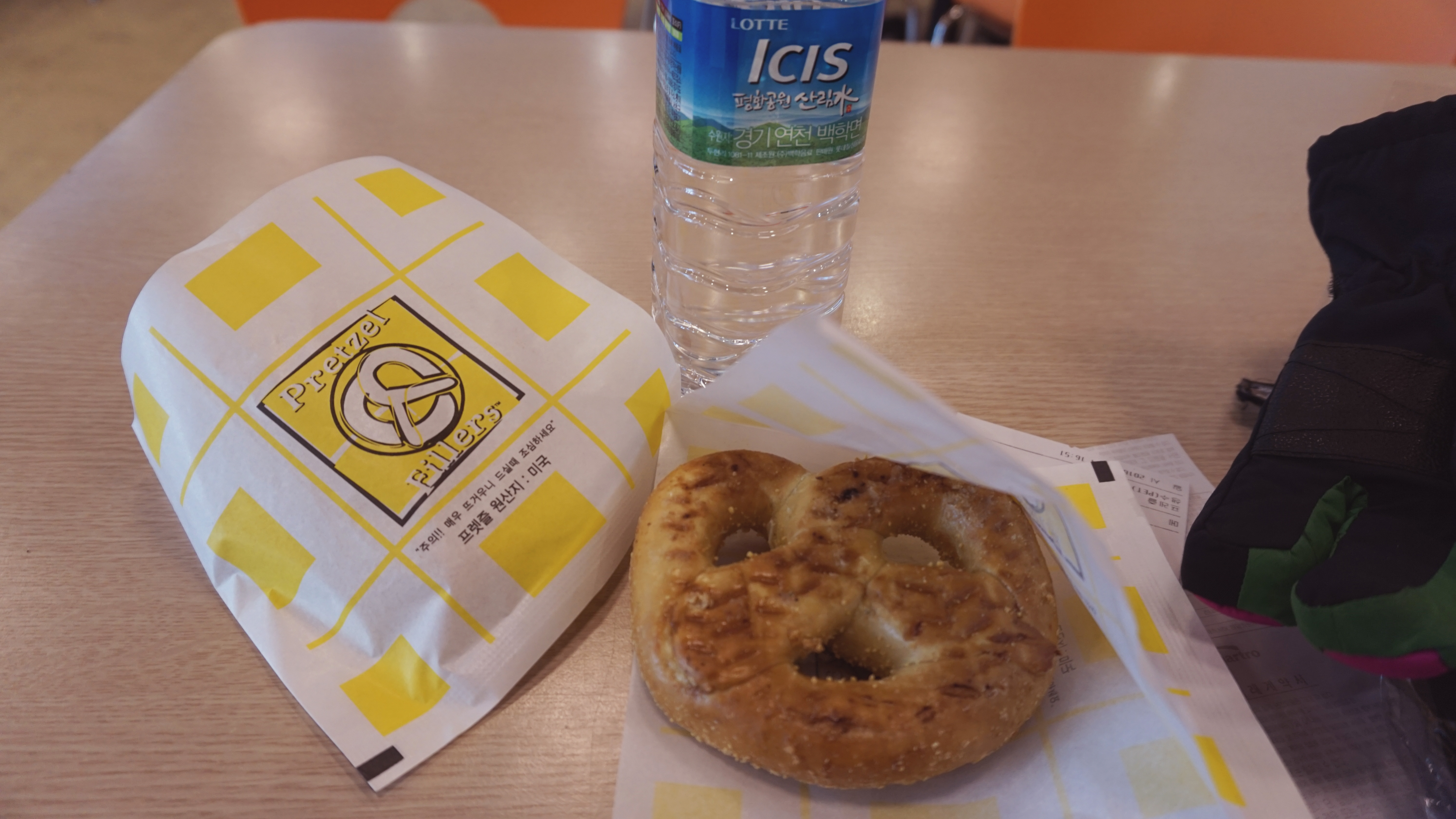 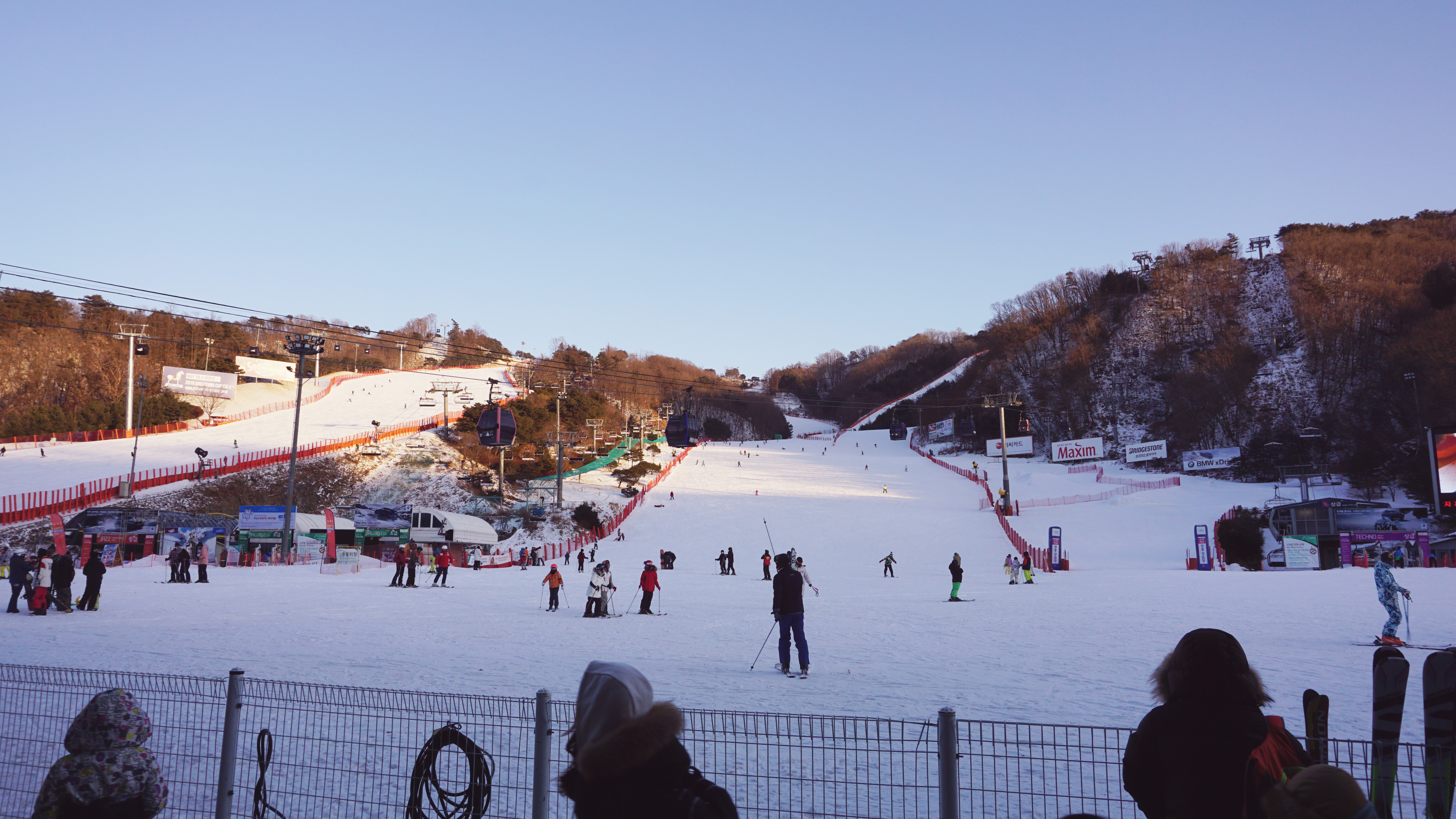 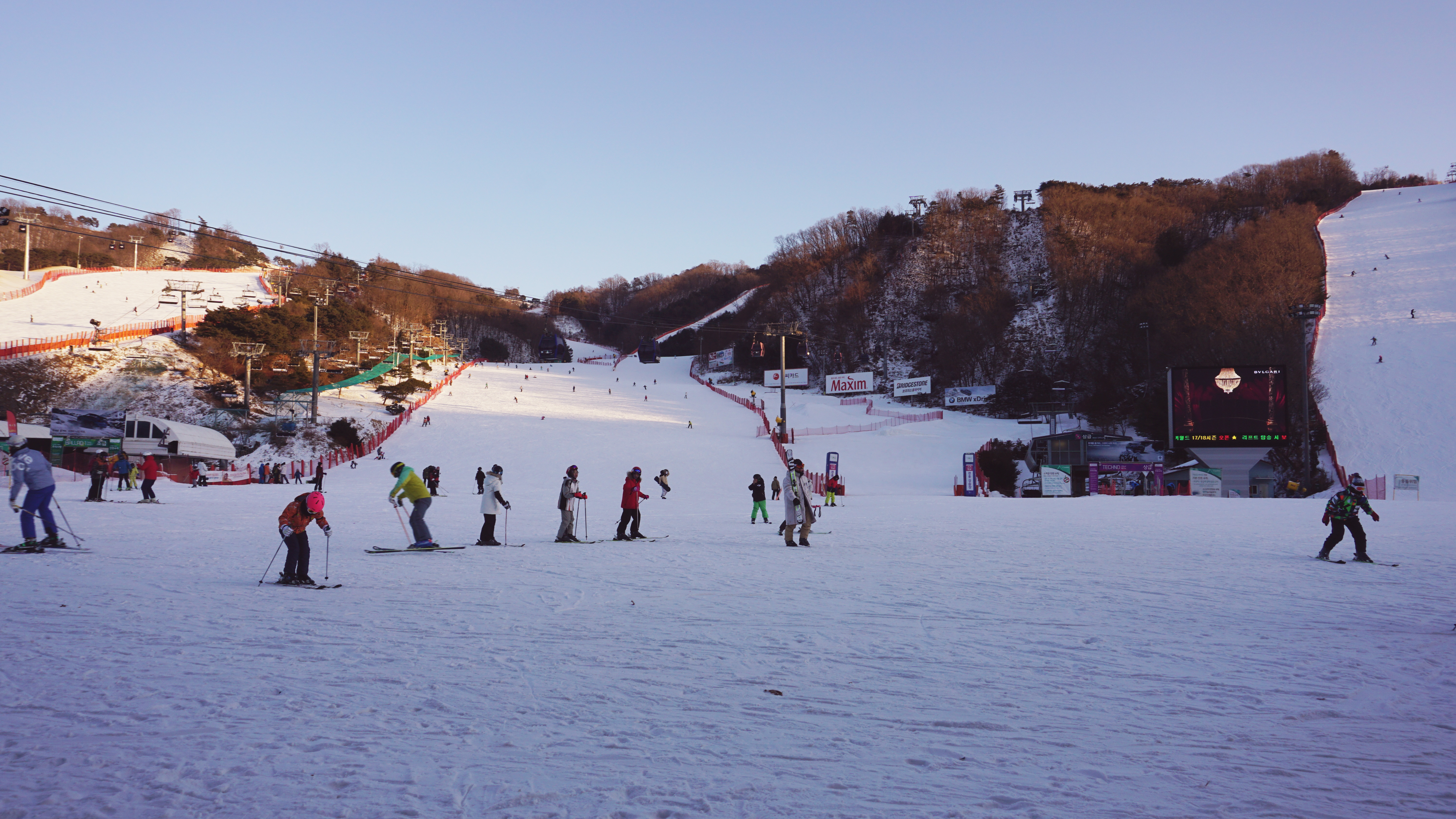 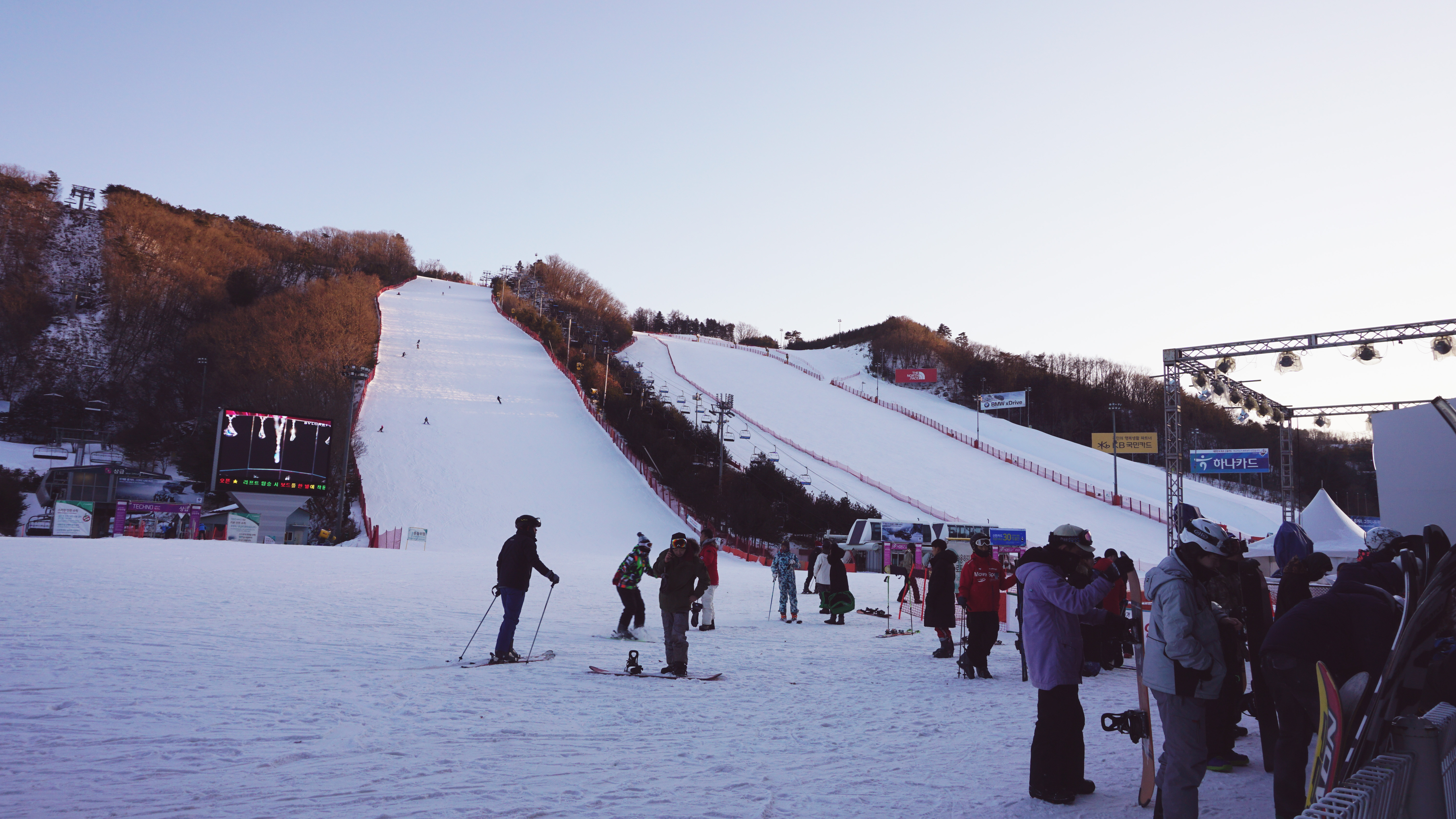 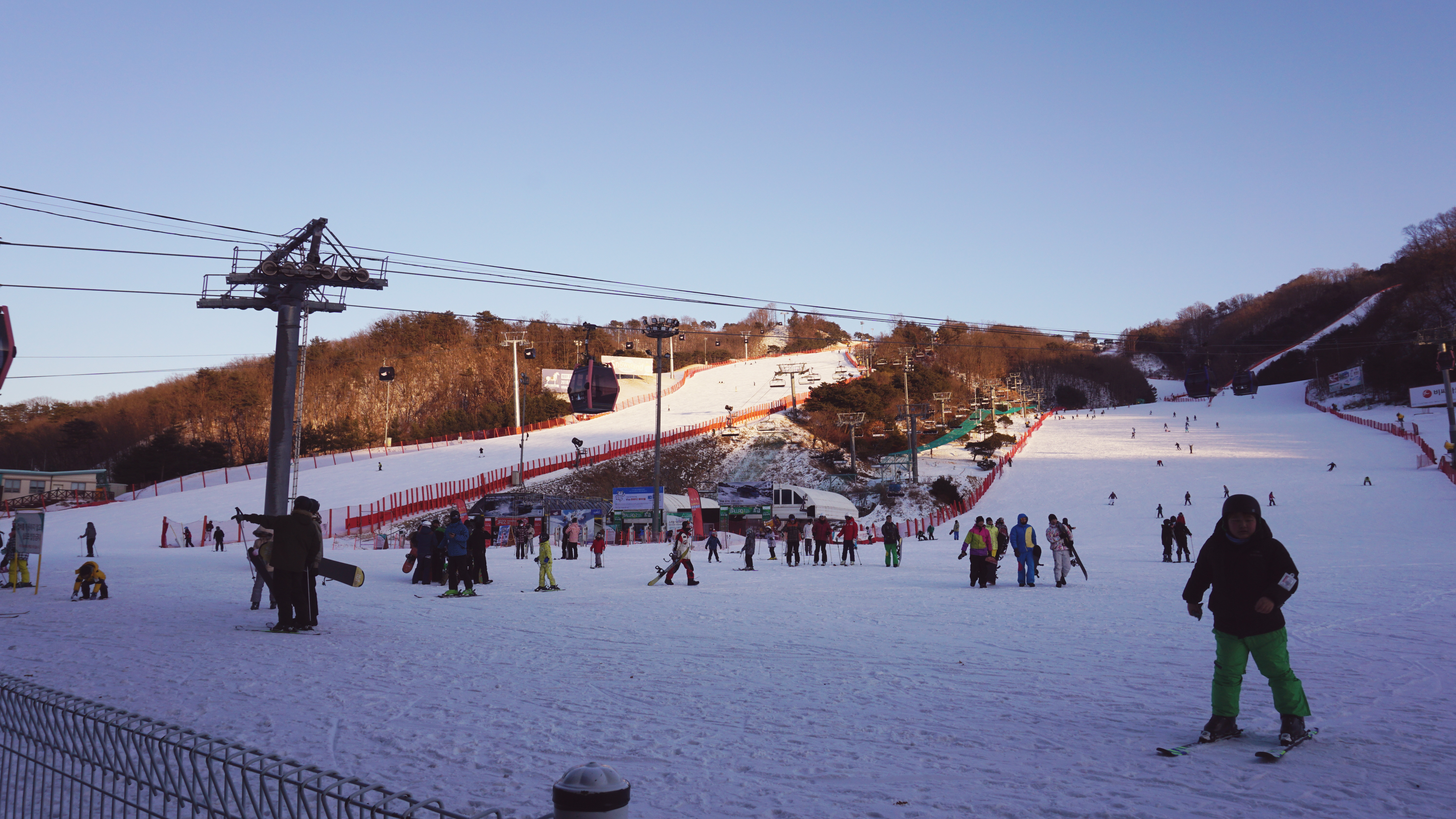 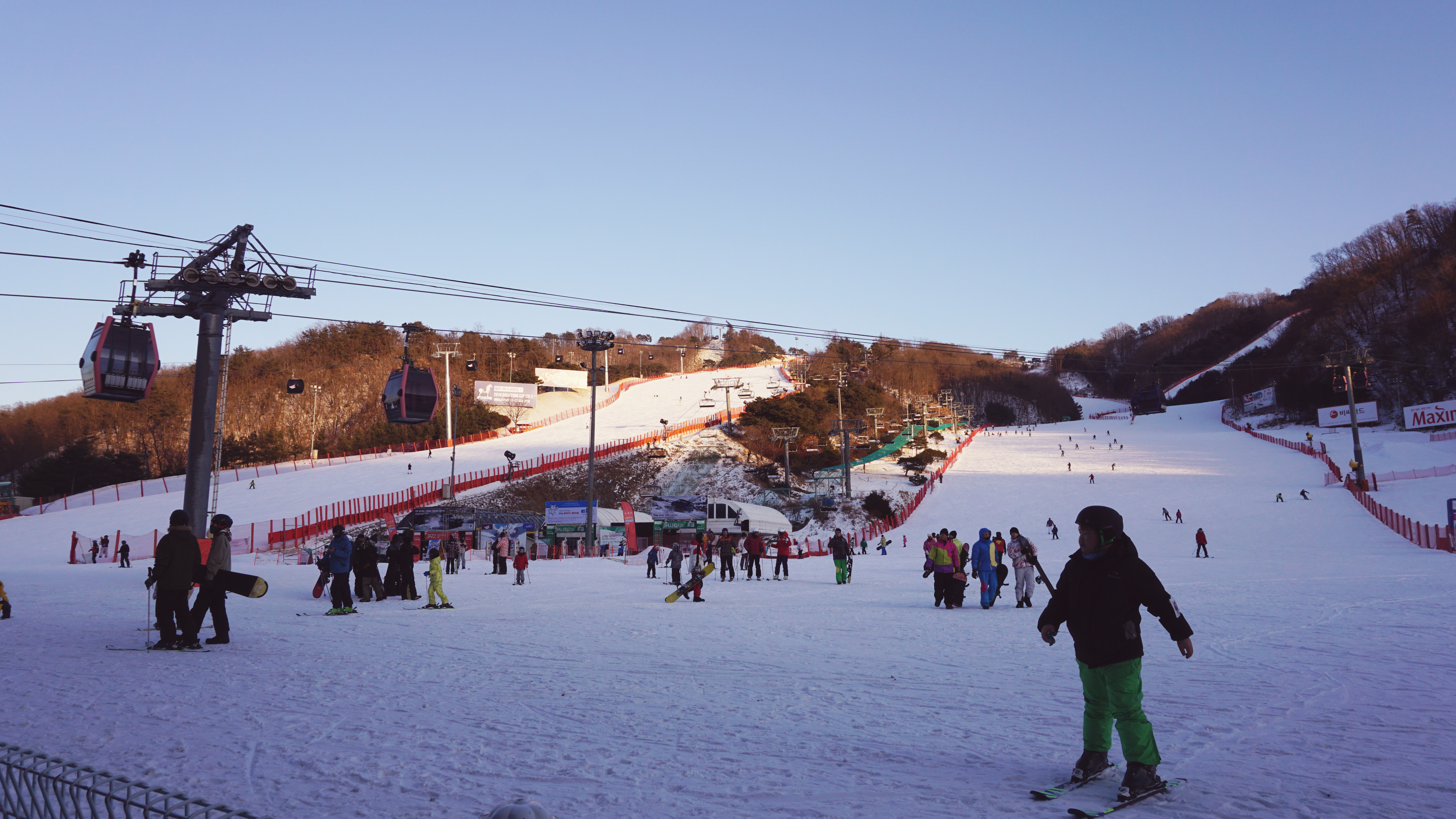 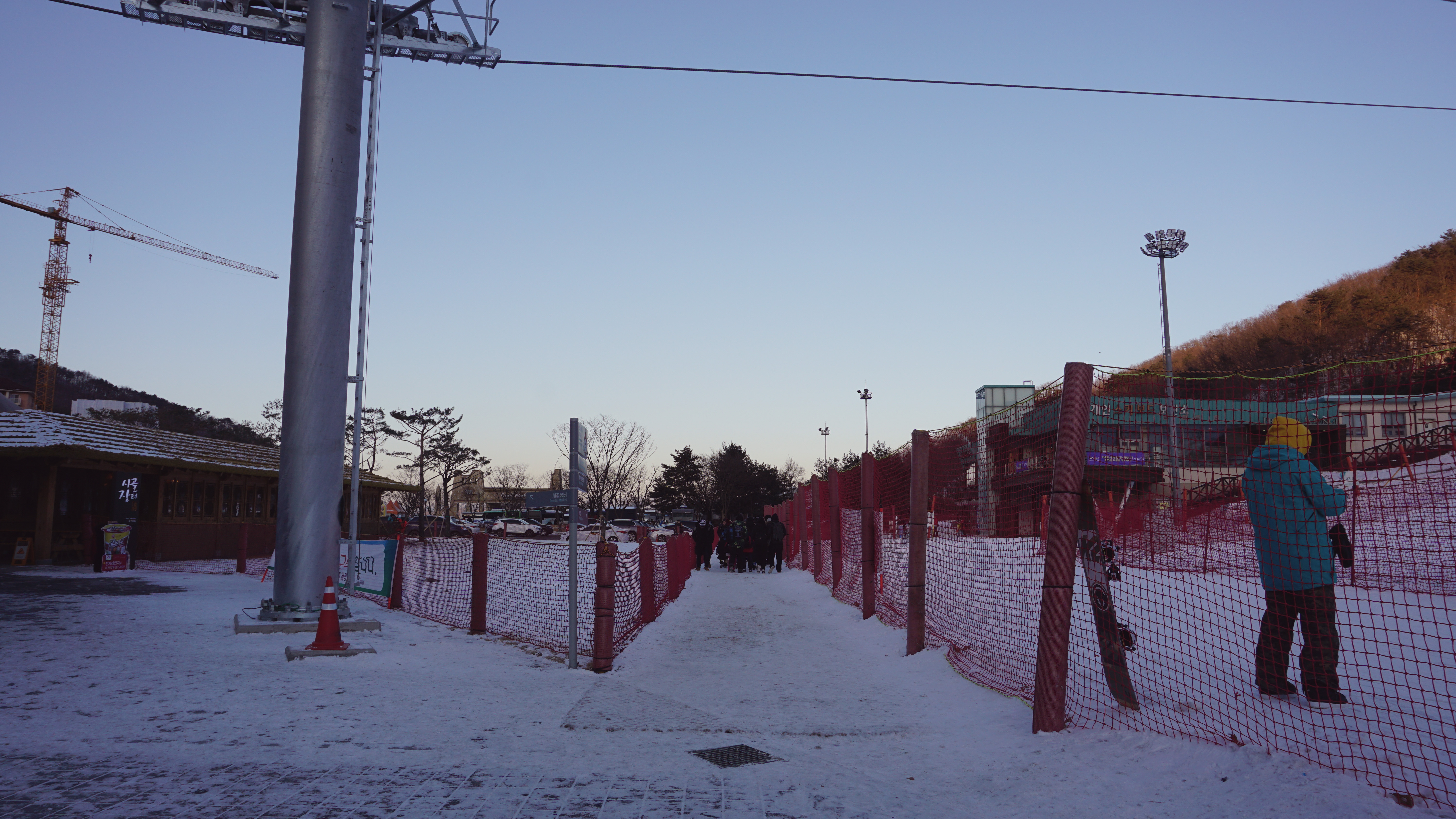 We got off the bus at Myeongdong and it was disconcerting to get out at -17 degree weather after spending about two hours in a warm bus. I was shivering so hard that C can hear my teeth chattering, and he wanted to bring me straight to the apartment. I wanted us to at least have dinner before heading back, and I told him that we should just eat at the first restaurant we see. We actually passed by some seafood places that frankly, didn’t look interesting, but eventually ended up in this barbecue place. It was weird because it was on the second floor of a nondescript building and we simpy saw a sign for charcoal barbecue and headed there. When we got there, it was filled by locals (mostly couples), and there were photos of public officials eating there (including the Prime Minister!), and.. Manny Pacquiao (a popular Filipino boxer). The owner, who also bore the name of the restaurant (that I couldn’t search for in Google huhu), was there and took great care of us. He assisted us in picking a set, cooked the beef for us (“medium rare, delicious, best” he says, while giving us a thumbs up) and fed us so much banchan I couldn’t take a photo of everything he placed on our table since it was overflowing with food. The beef we had was good quality, and it was one of those few moments in my life where I can understand when people compare biting into beef as if biting into butter. He saw how much C enjoyed the soup and kept refilling the soup, and kept putting food on our plates as we finished. C and I both ended up having extra cups of rice, as well. Granted, it was also our most expensive meal to date (costing us 120,000++ won) but it was such a memorable experience that we have the location of that hotel engraved in our brains. Every single time we found ourselves in Myeongdong, C can literally navigate us back to this place. It was pretty unfortunate that we still haven’t won the lottery (until now), because I could guarantee that we would have returned there for a meal every single time we were in the area. It was so good that this was the part of the trip I talk about first when I got back and my friends asked how our vacation was. Our best meal in Seoul! ❤ 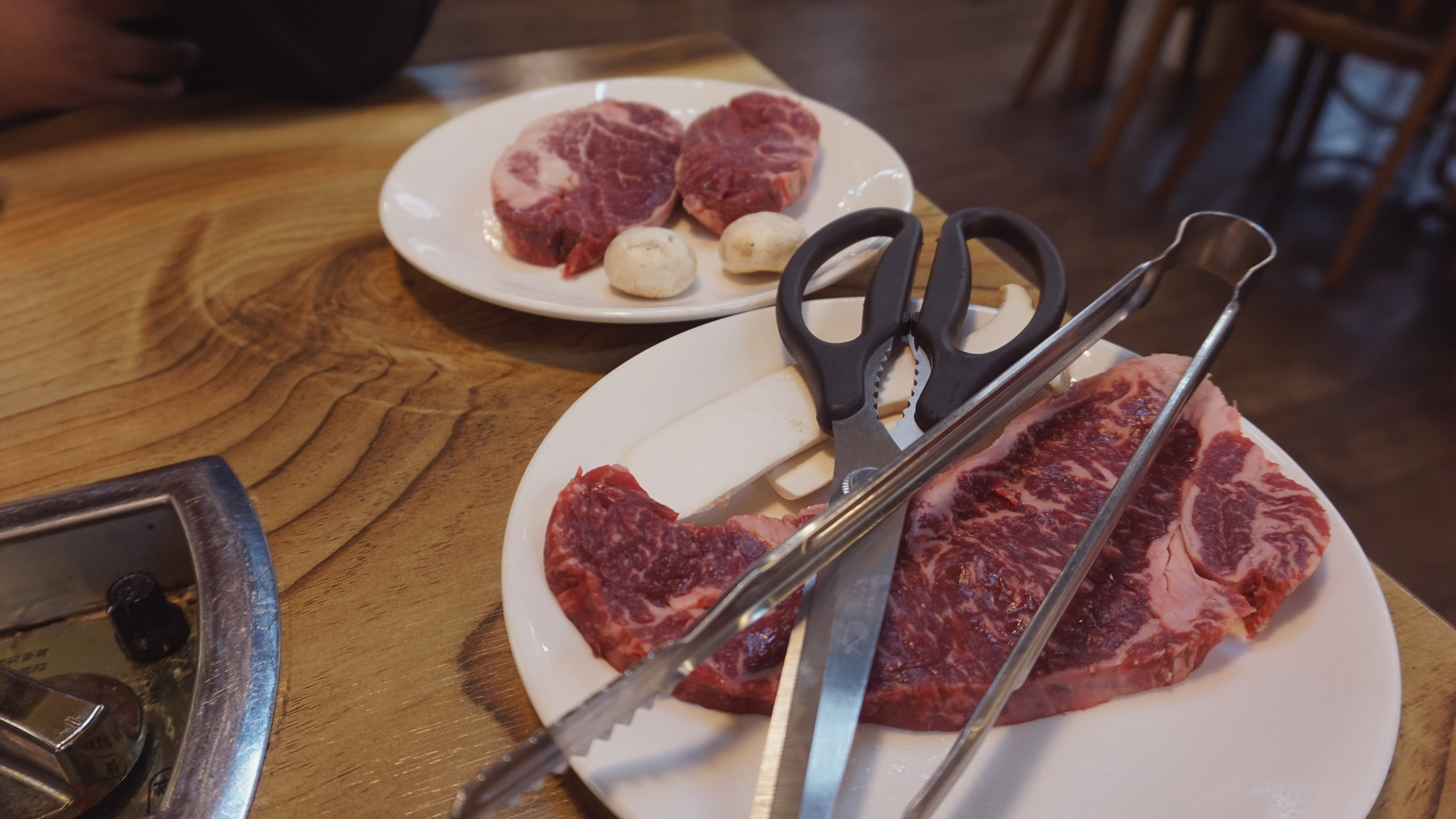 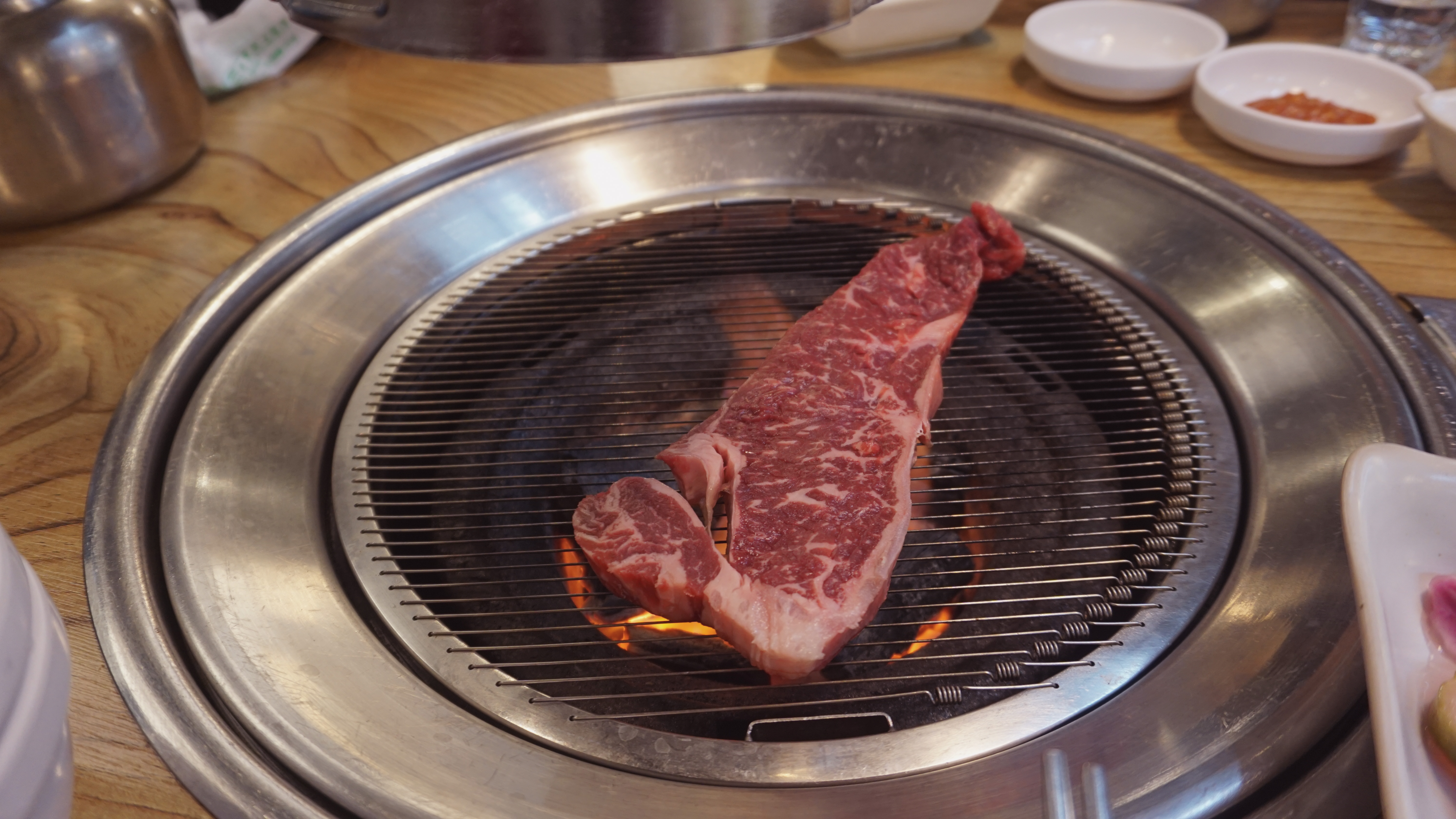 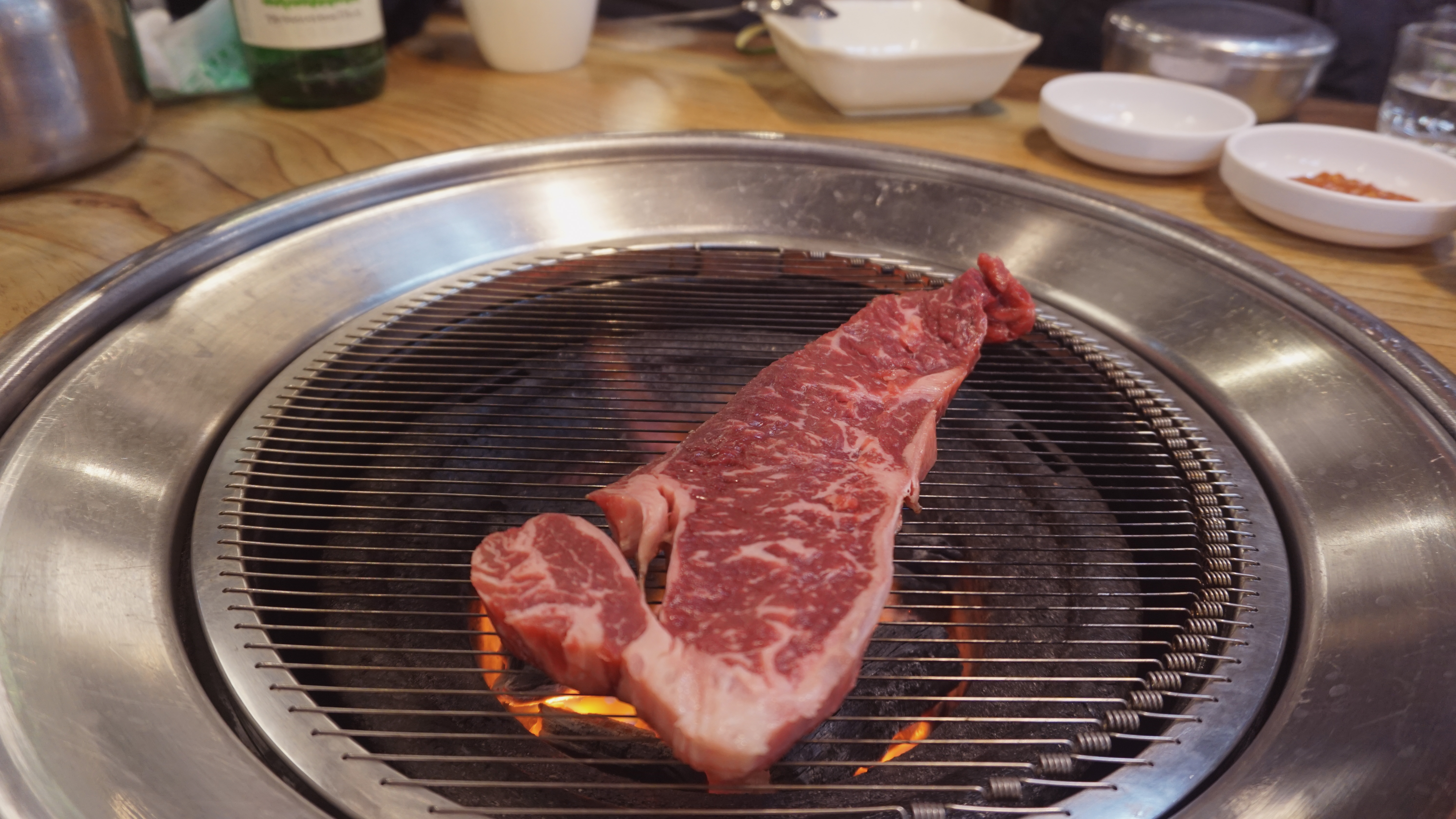 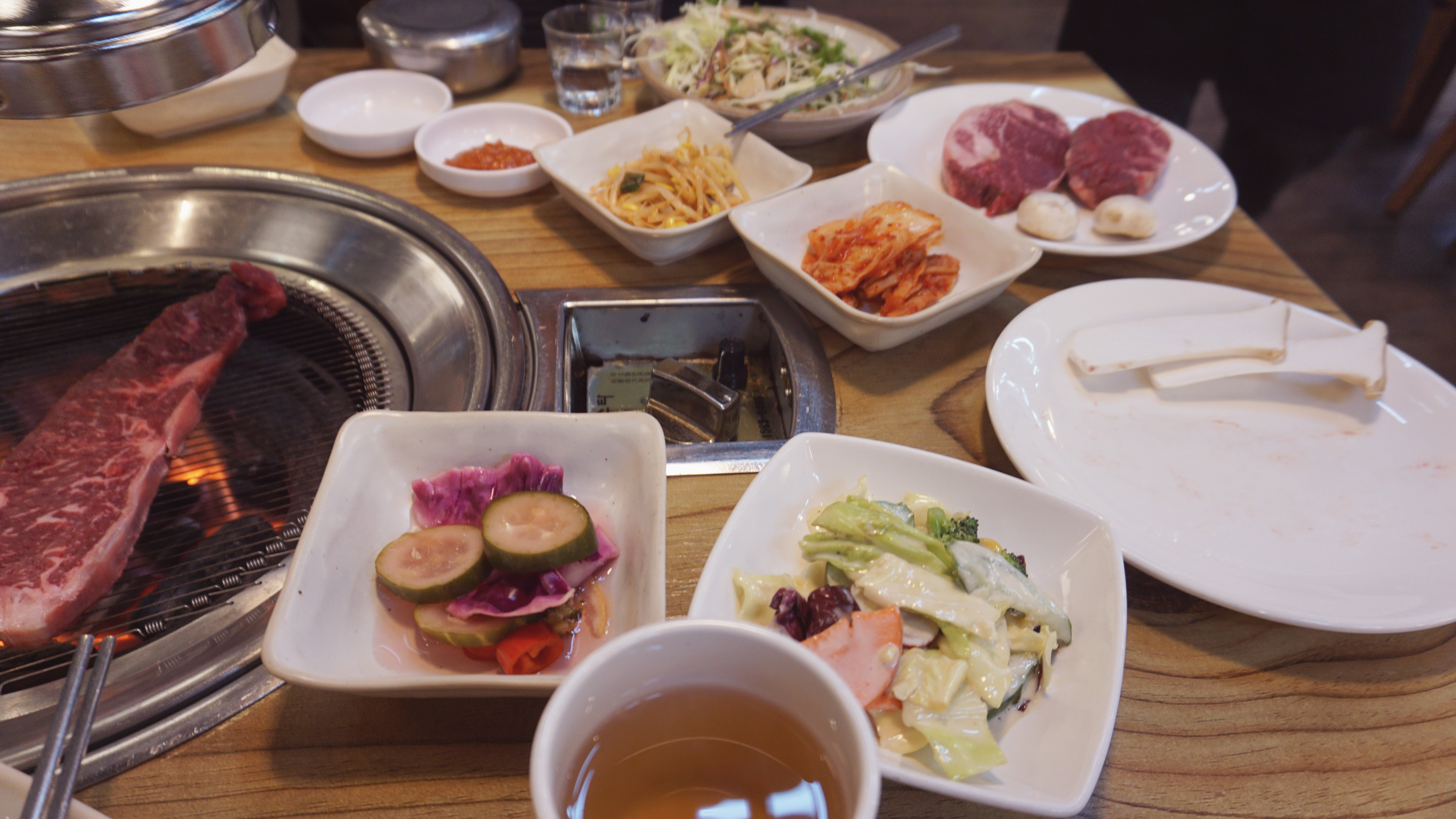 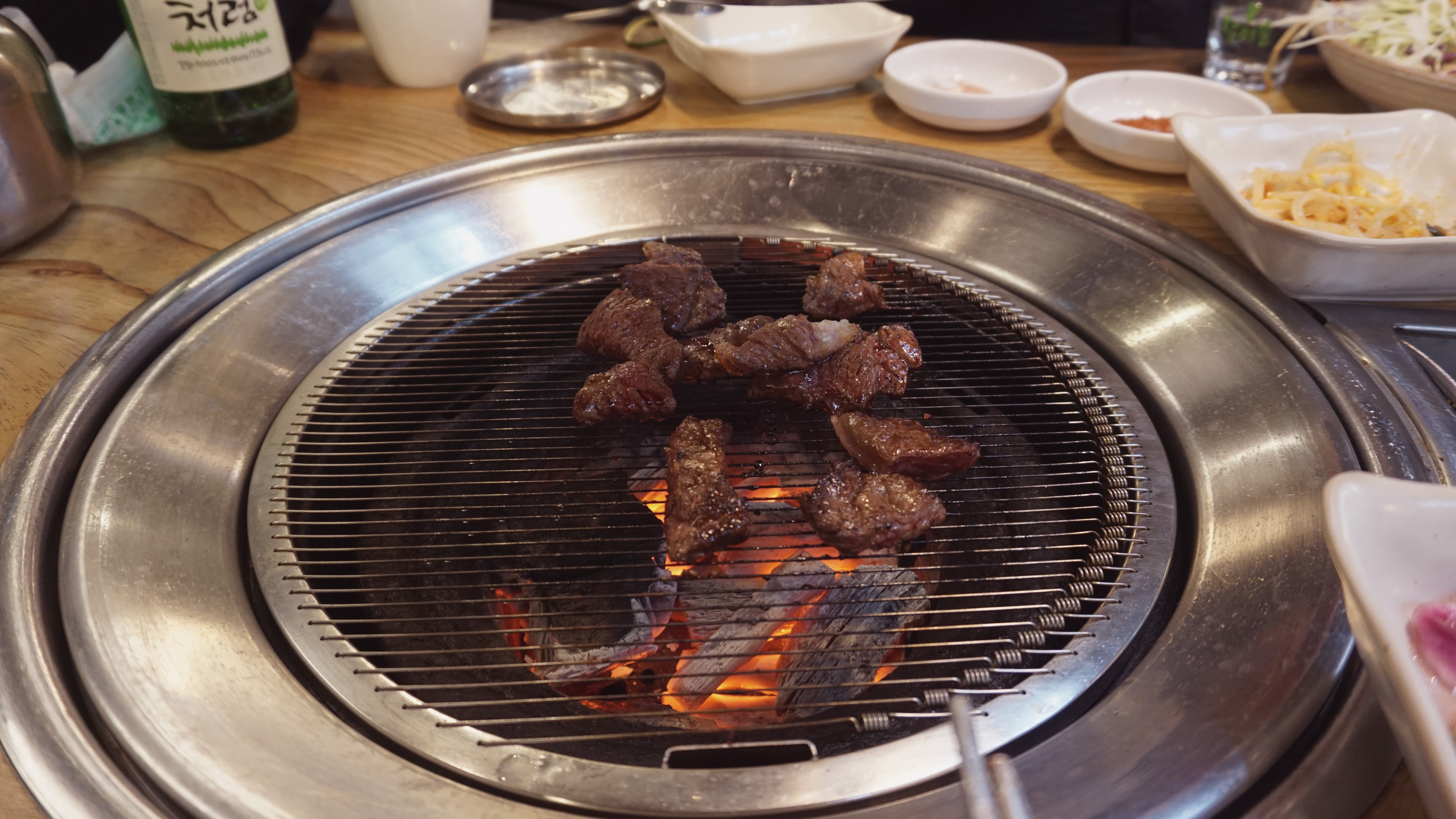 Overall, I think this day in Seoul perfectly encapsulates how our relationship is. It’s far from perfect. We have bad times and rough starts, but we have greater times filled with medium rare charcoal-grilled steak that overshadow everything else. I wouldn’t give it up for anything else. ❤

What’s your best meal during a trip? Let me know in the comments below, I’m excited to find out. 🙂