Another week has passed before I got to finish writing this post. I feel like documenting this trip will take me until the end of March to finish because I’m still getting accustomed to working in an office daily (after working from home almost every day since January 2016). I still live at my parents’ house which is, unfortunately, a couple of hours away from the office so I always have to leave by 5:30 in the morning to make sure I miss the rush hour traffic. That meant waking up at 4:30 AM every single day and getting home half past 7 in the evening. It’s not an ideal setup, but it’s the one I have right now. And I just need to make it work. 🙂

Being from a tropical country (where the temperature is either hot or hotter), we also had to make our clothes work with the winter weather in Seoul. We woke up to our second day with the temperature dropping to -3. Since we will be spending some amount of time outdoors, we knew we had to bundle up in order to enjoy the day. All our photos look like we just spent two days vacationing in Korea since we both only had two coats with us. We also both decided not to wear scarves (and made the mistake of not even bringing one inside our backpacks lol) since we were heading to an amusement park. 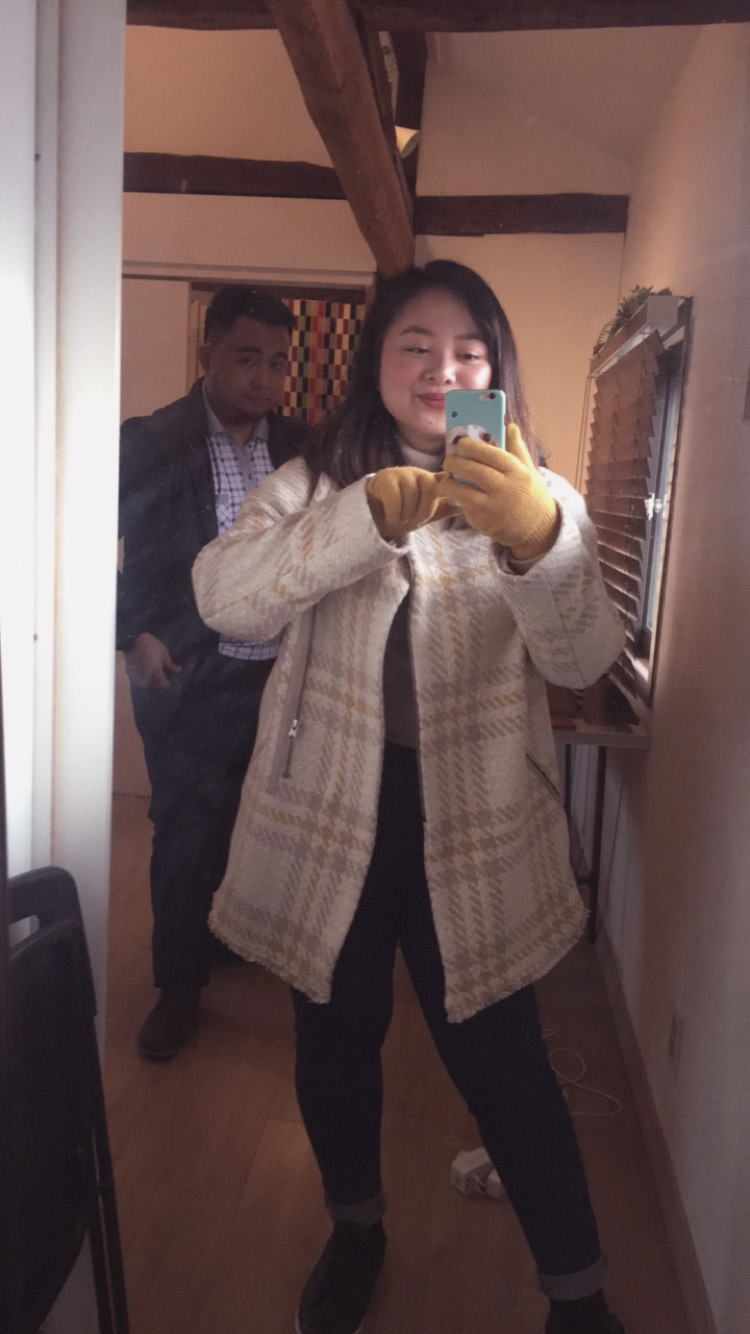 C and I are huge fans of amusement parks. I imagine that if one of us ever wins big in the lottery (or maybe the casino? Haha!), we’d purchase some VIP passes they give celebrities in amusement parks. I mean, we’re already the type of people who’d pay for the convenience of not having to line up anywhere (as long as we can afford it because we haven’t won the lottery yet). Wherever we’re heading to, we check if there are amusement parks or any experience that will give us some sort of adrenaline rush and we’d do it. One of my friends who head to South Korea multiple times a year suggested that if we plan on doing both Everland and Lotte World, to try Lotte World first before Everland as the latter have more adult rides. Although he was right, I kinda wished we did the opposite, but that’s something I’d write about a couple of posts from now.

Getting off at Jamsil Station, you don’t really feel like you’re heading to an amusement park. If they didn’t have signs all over to point out where Lotte World is located, we would have probably ended up exploring the nice mall the subway was connected to. There were tons of snack places that lined up the way to the park, and since we haven’t had breakfast yet, we were so tempted to try out everything we passed by. We already saw the main gate of the amusement park, so we decided to check out an area that looked like a food court to have brunch. Of course, I had Korean cuisine, while C had something that was familiar to him (hamburger steak). One of the things that we noticed about dining in Seoul in general, is that aside from their banchan (side dishes), their serving size is HUGE. And yet people are stick thin. It must be all the stairs at the subway stations, and all the walking involved in getting to places. 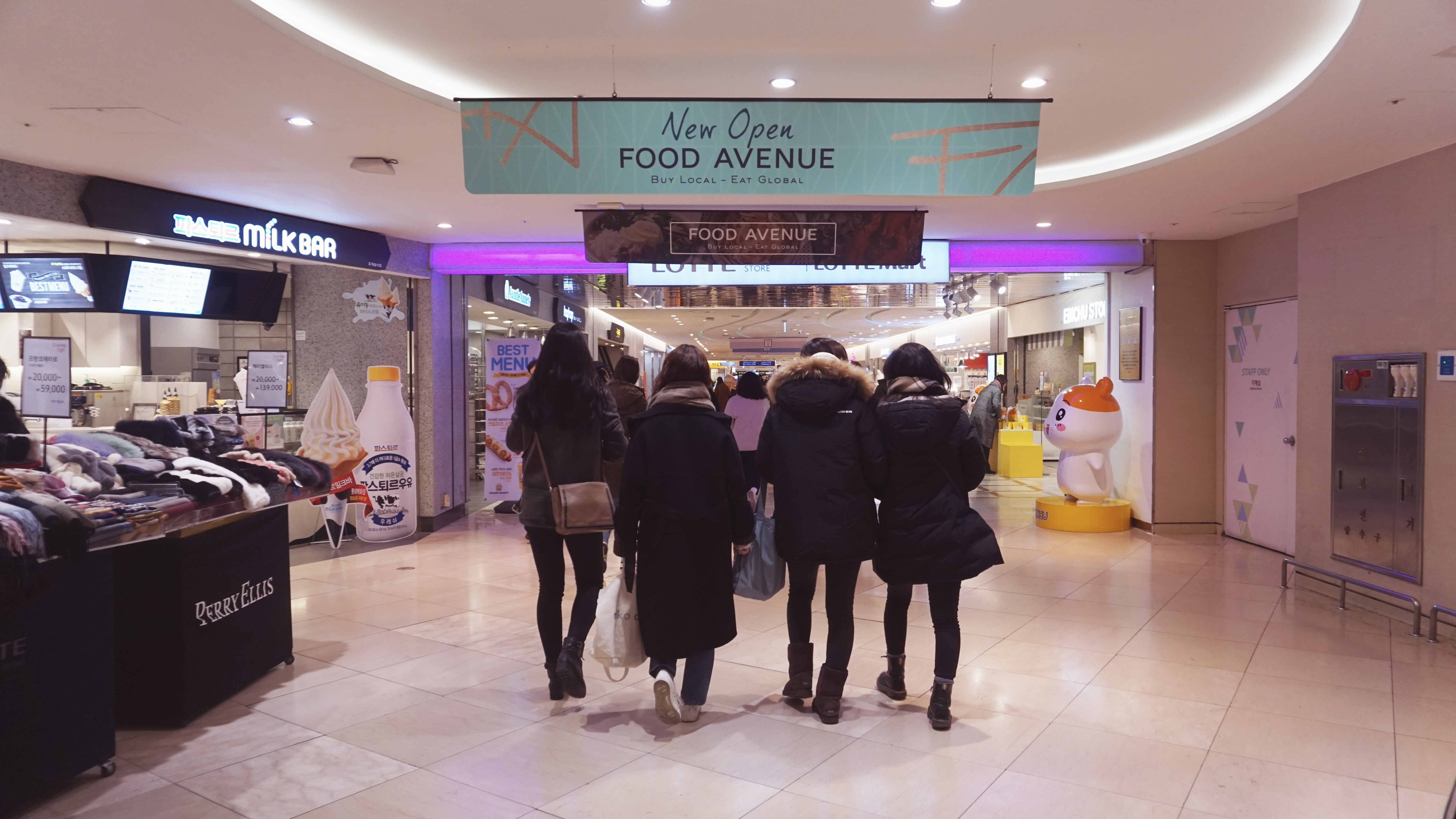 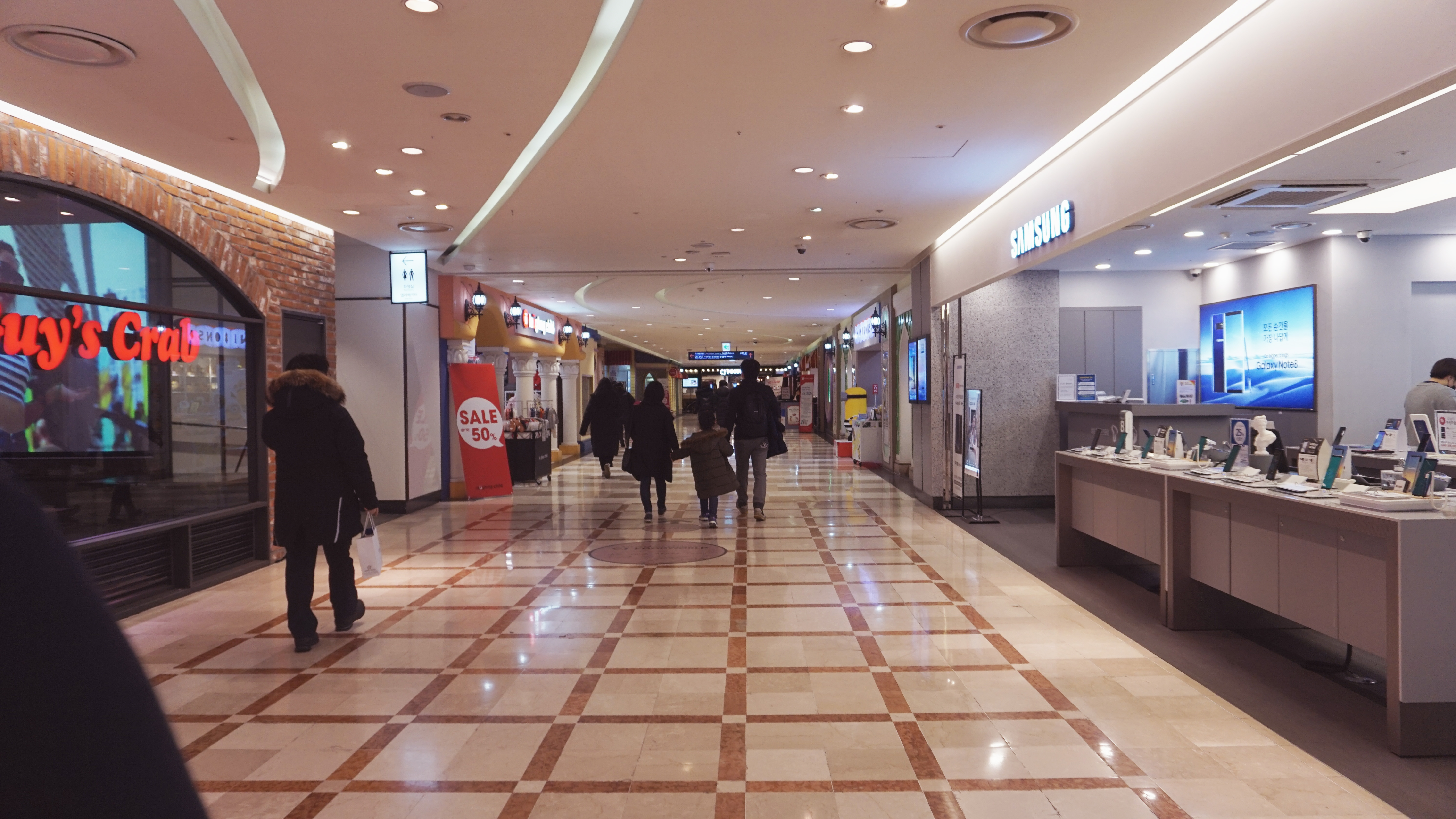 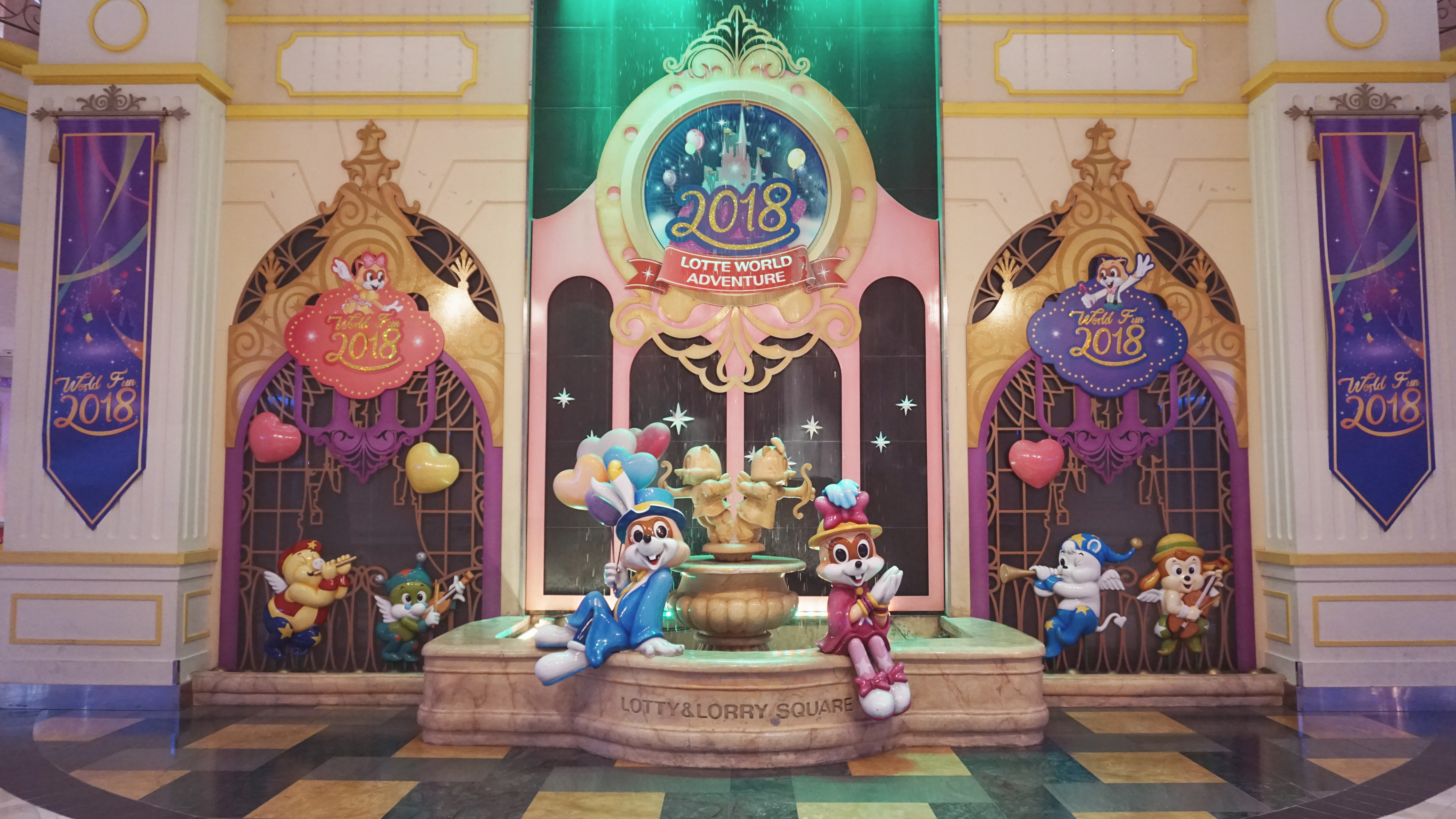 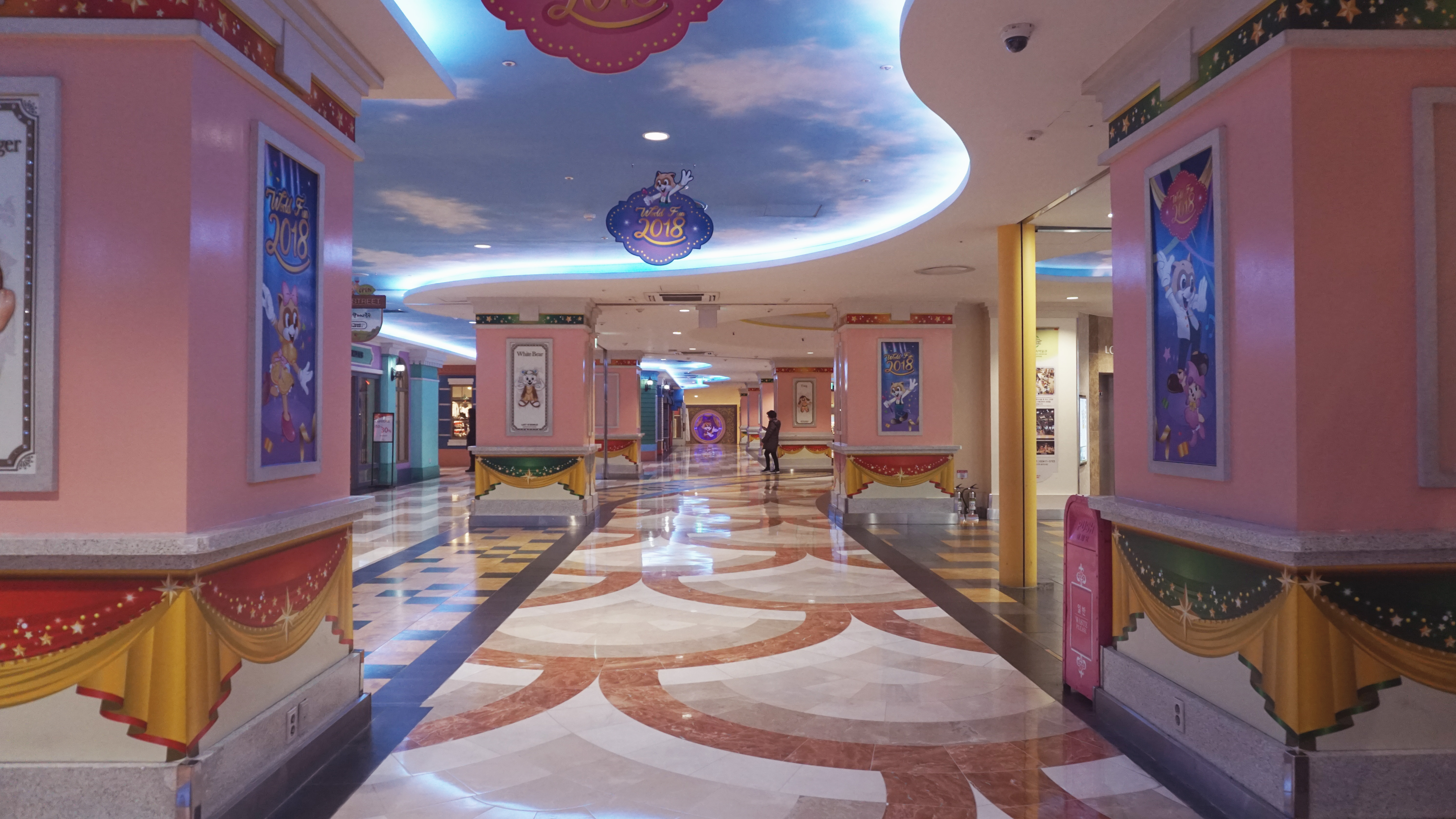 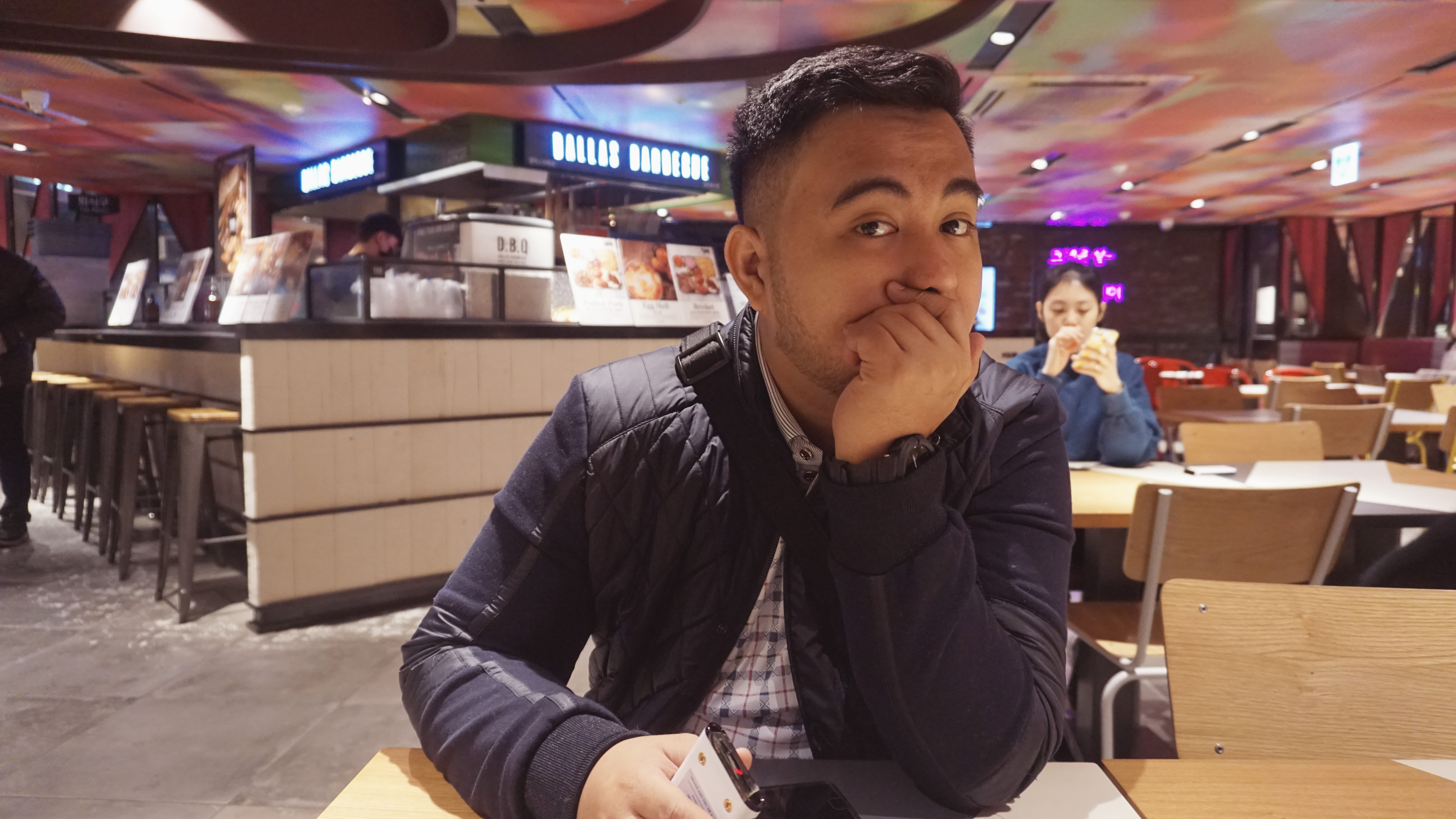 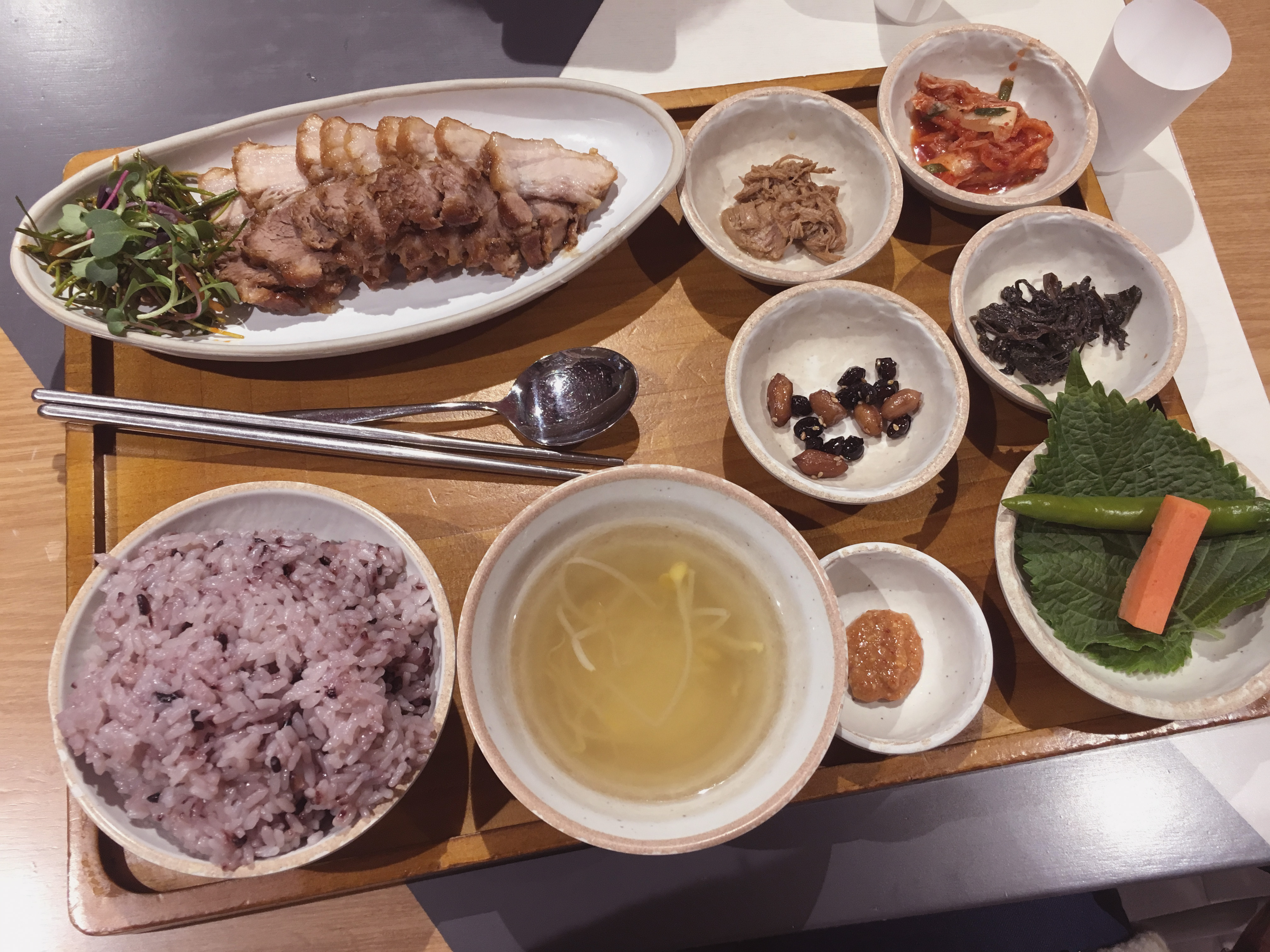 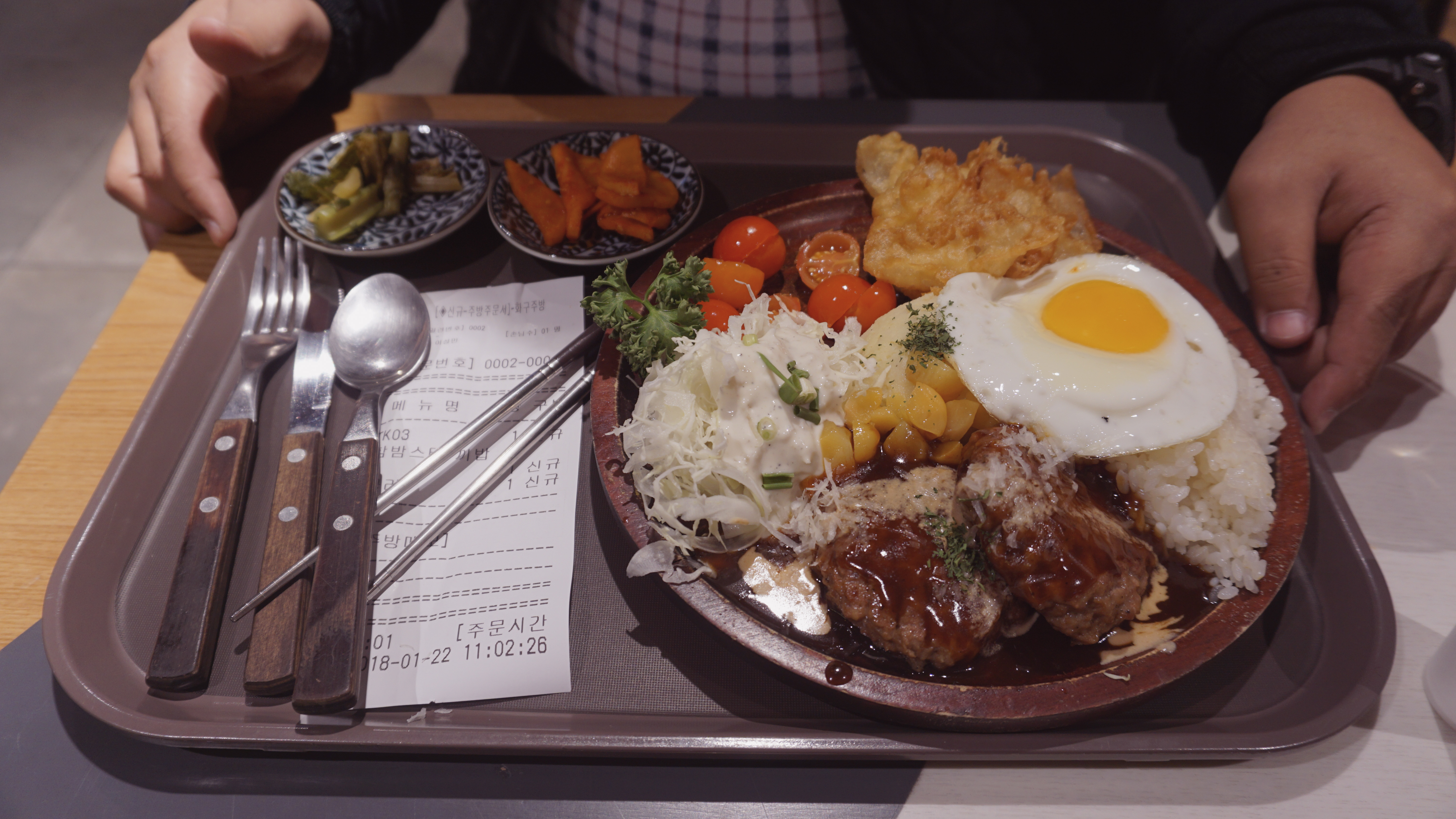 We booked our tickets through KLOOK (Similar link: Lotte World Discount Ticket + Magic Pass), and we can only collect the tickets at the South Gate. Claiming our tickets didn’t take a lot of time, and we were able to enter the park and enjoy the rides. I did wish I knew ahead of time to purchase a Magic Pass for all the fun rides because the queue was crazy! We explored the outdoor part of the park first since it had the longest queues and more thrilling rides. We took turns buying snacks from the different stalls outside while the other waited in line. We tried out Gyro Swing, Gyro Drop, and Bungee Drop. Honestly, while it was a fun ride, C and I were both conflicted what we felt more: the adrenaline rush or the cold. The temperature dropped some more during the day and it even rained which led to all the outdoor rides closing. 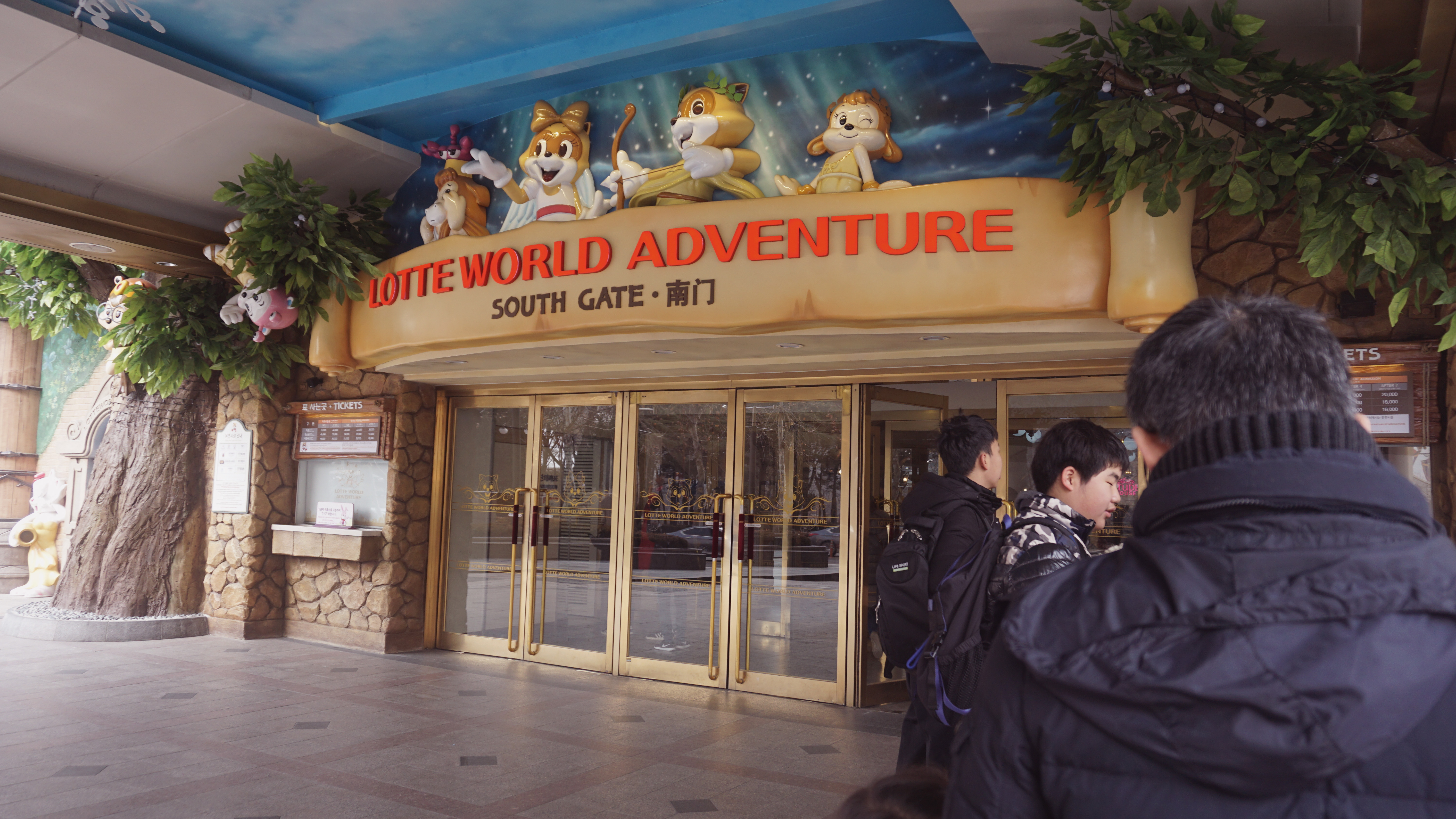 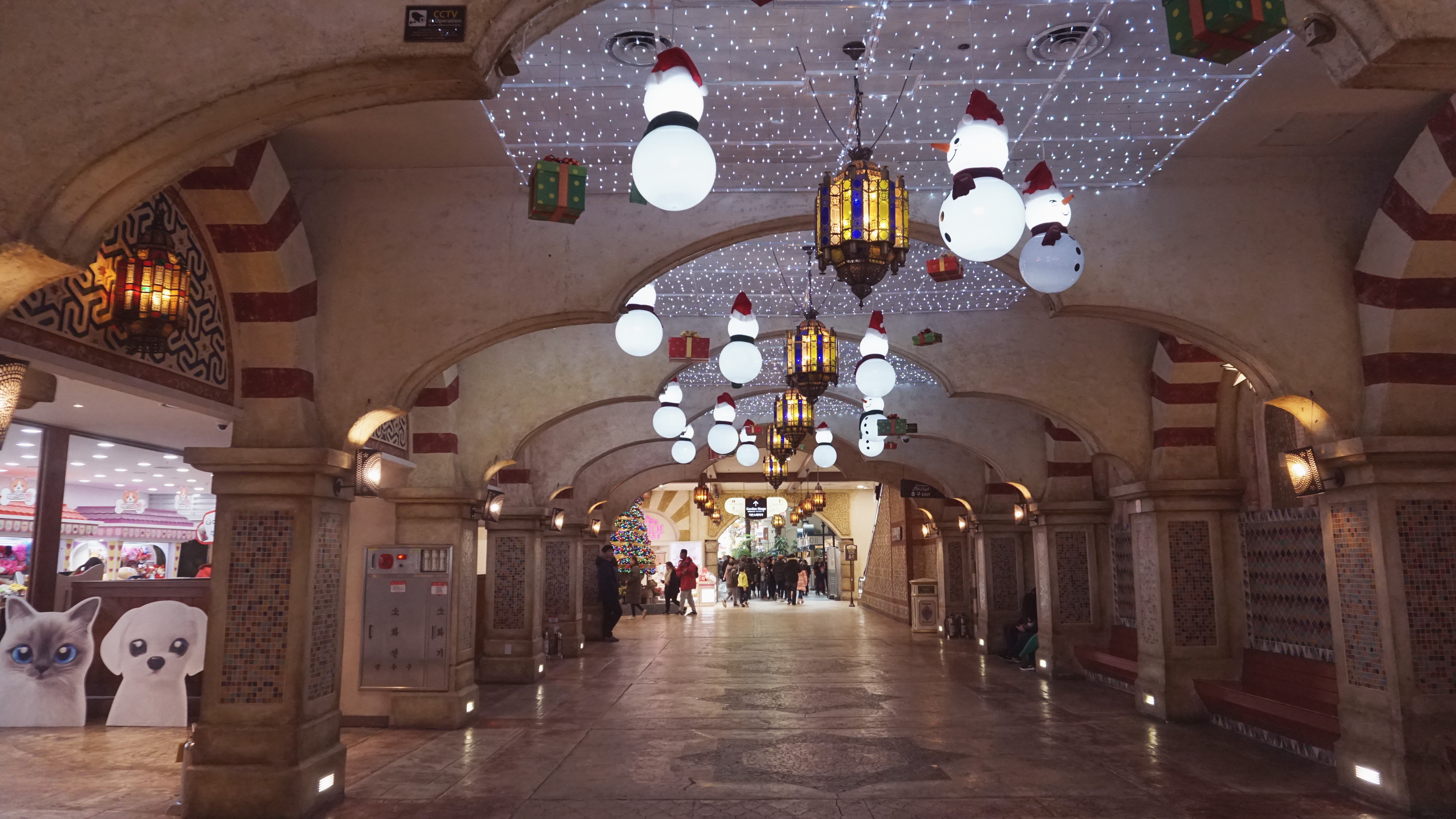 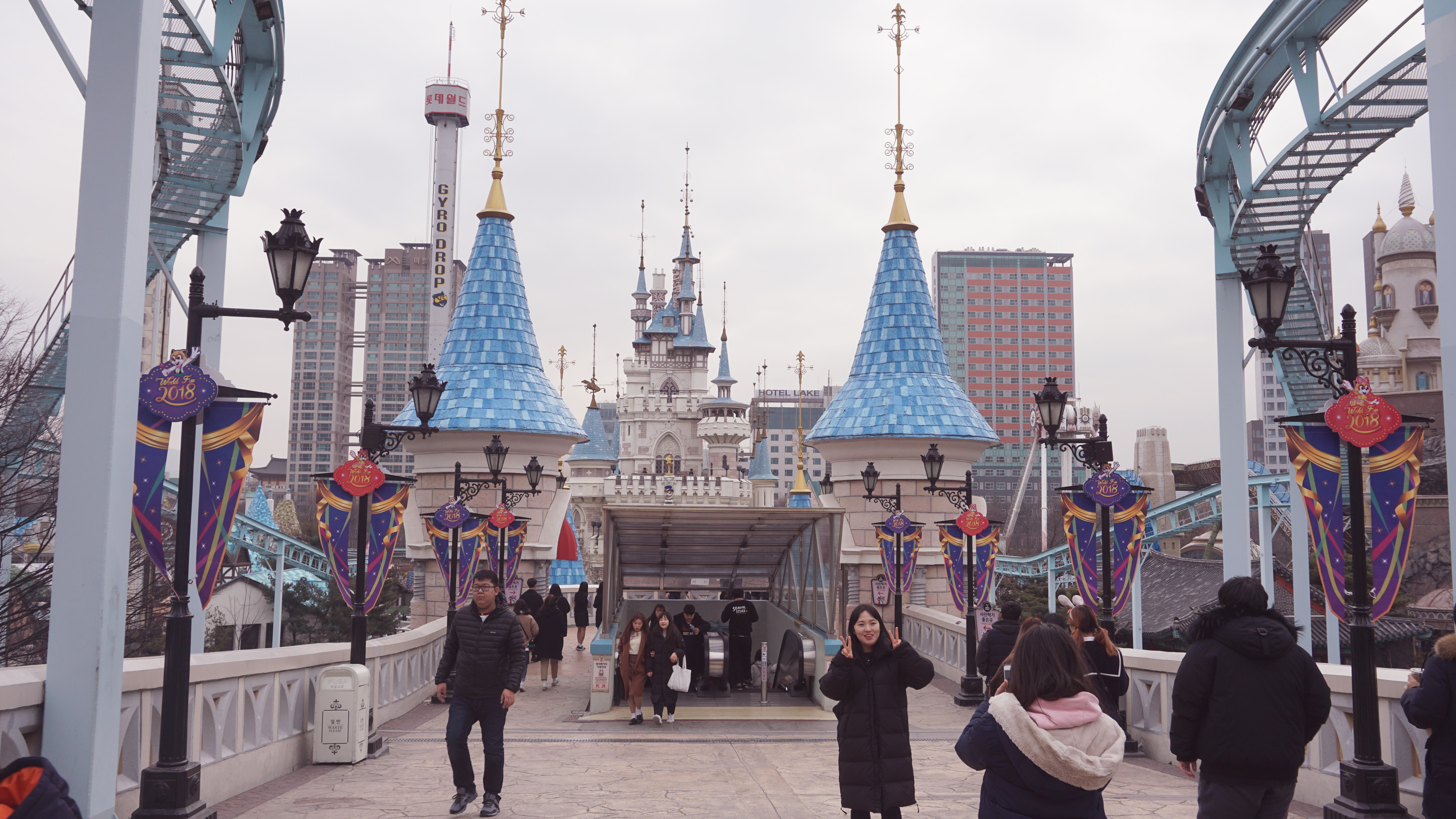 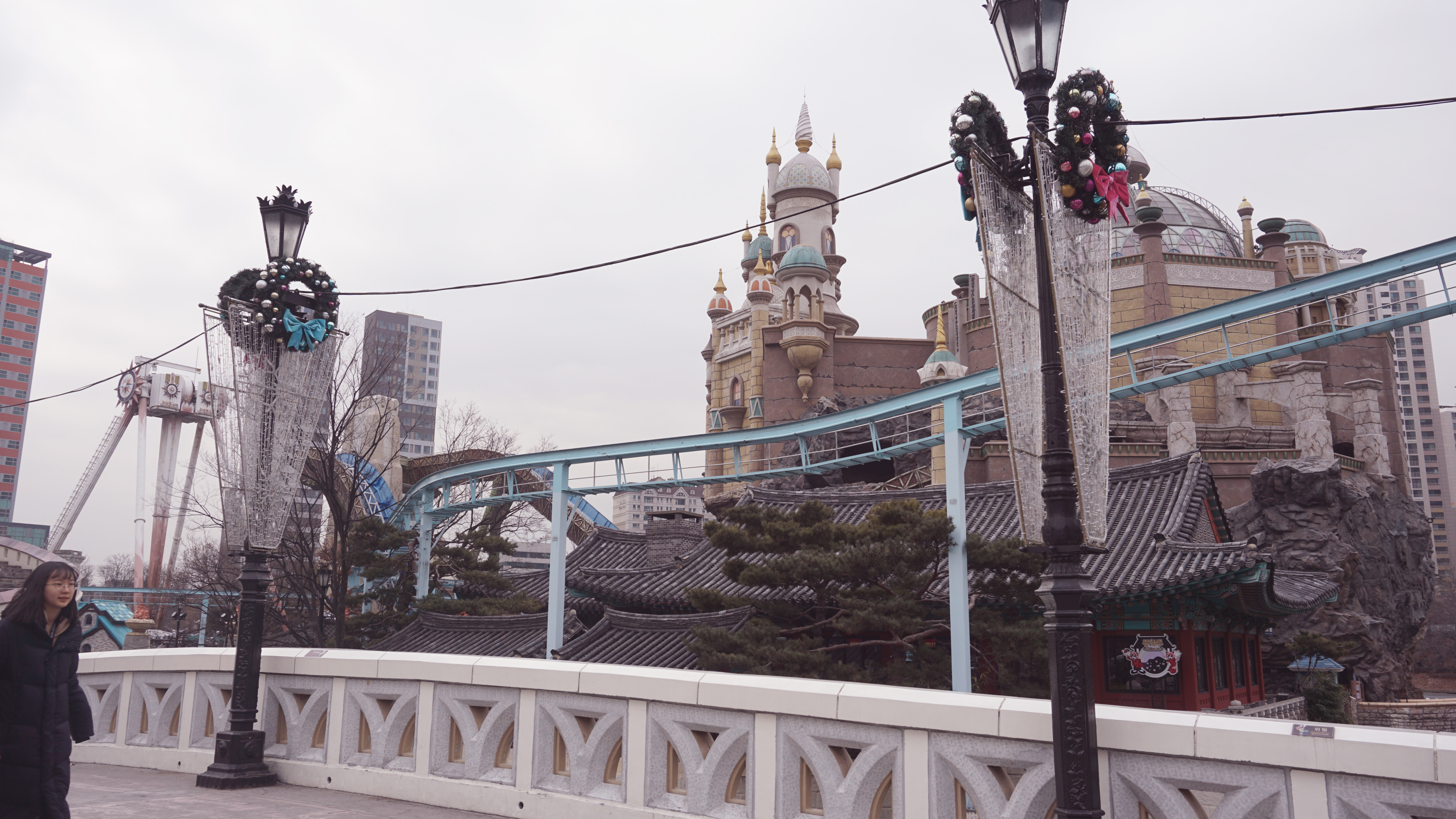 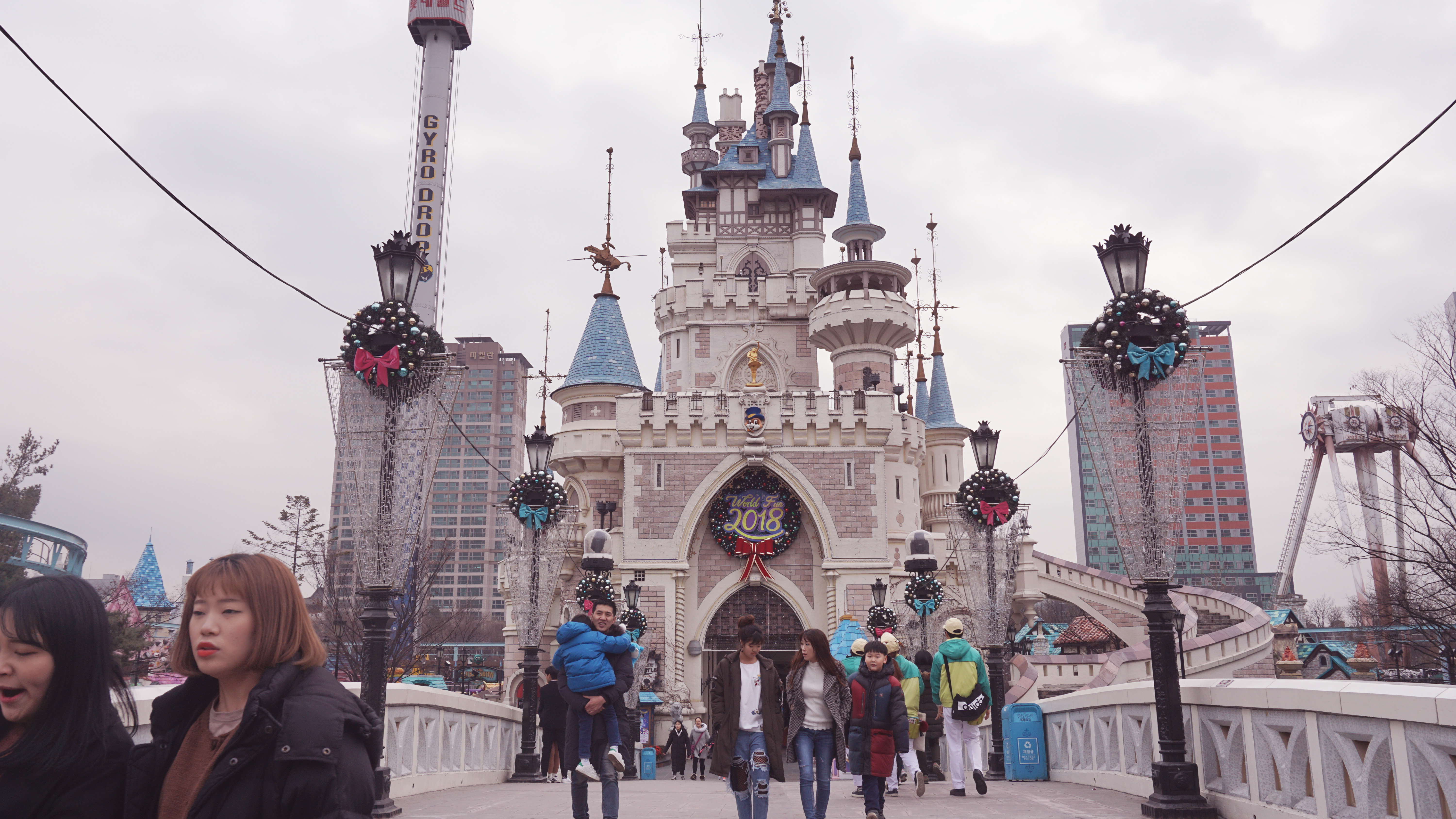 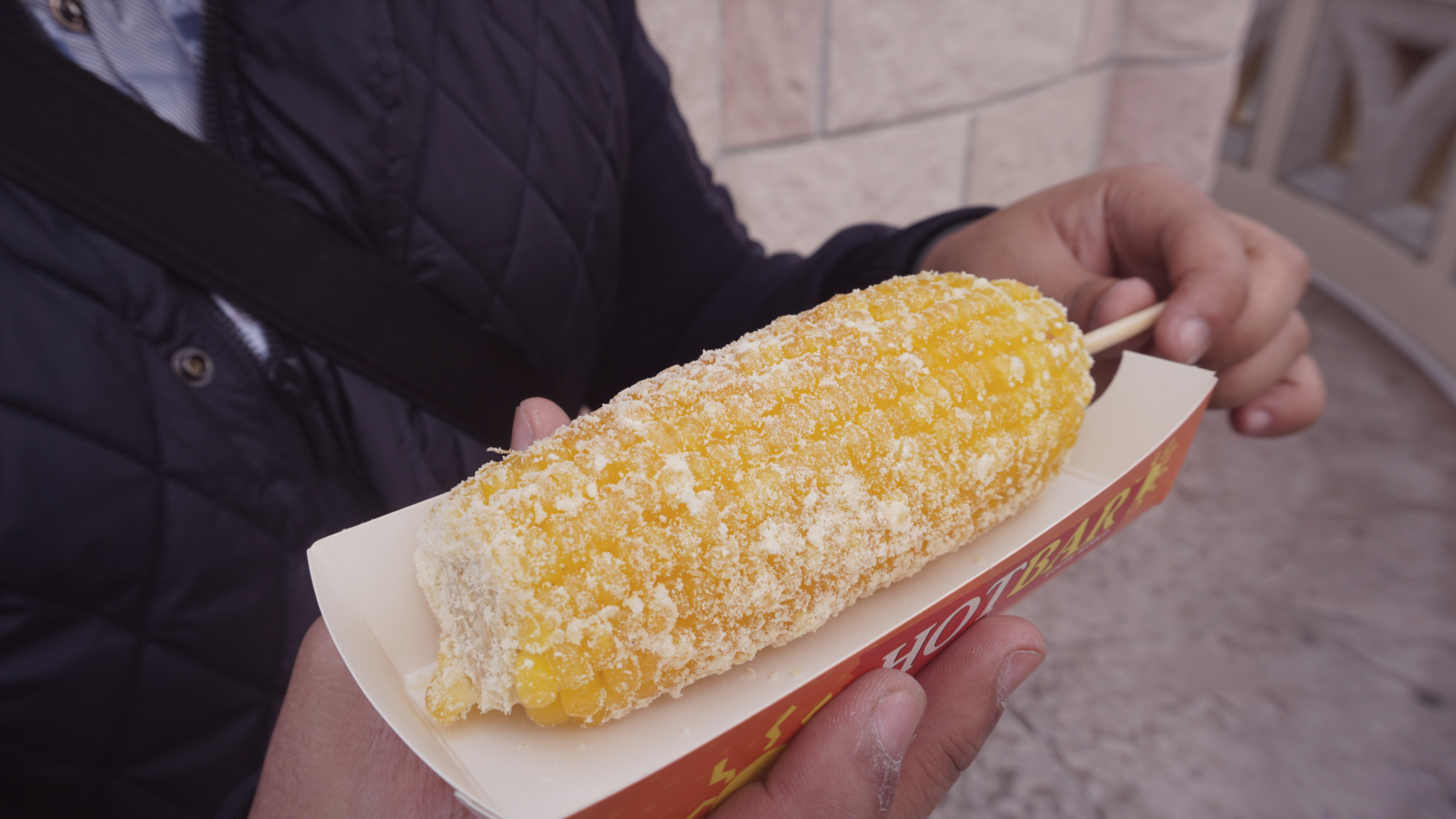 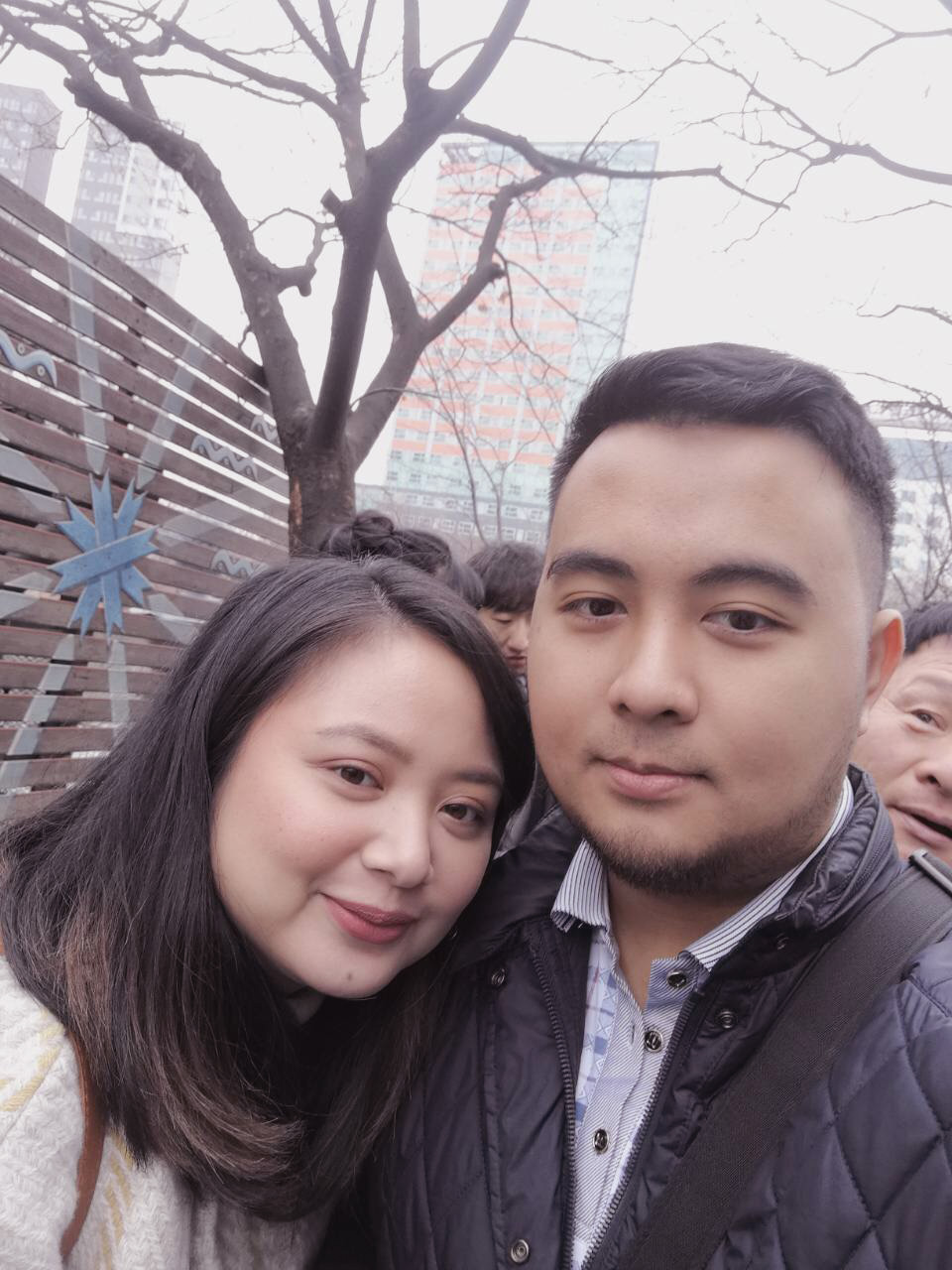 We headed inside to explore the indoor part, along with the rest of the park goers when it started to rain. The wind, the water, and it being winter was not the best combination for people used to the tropical weather! While there are a plethora of thrilling indoor rides you can try, there was a sudden influx in the queue, and the short queues we passed by initially suddenly had 120 minutes waiting time. We went on two more rides, and before we knew it, it was already evening. We were exhausted from having to queue so much that we decided to head back to our Airbnb and simply have dinner within the area. 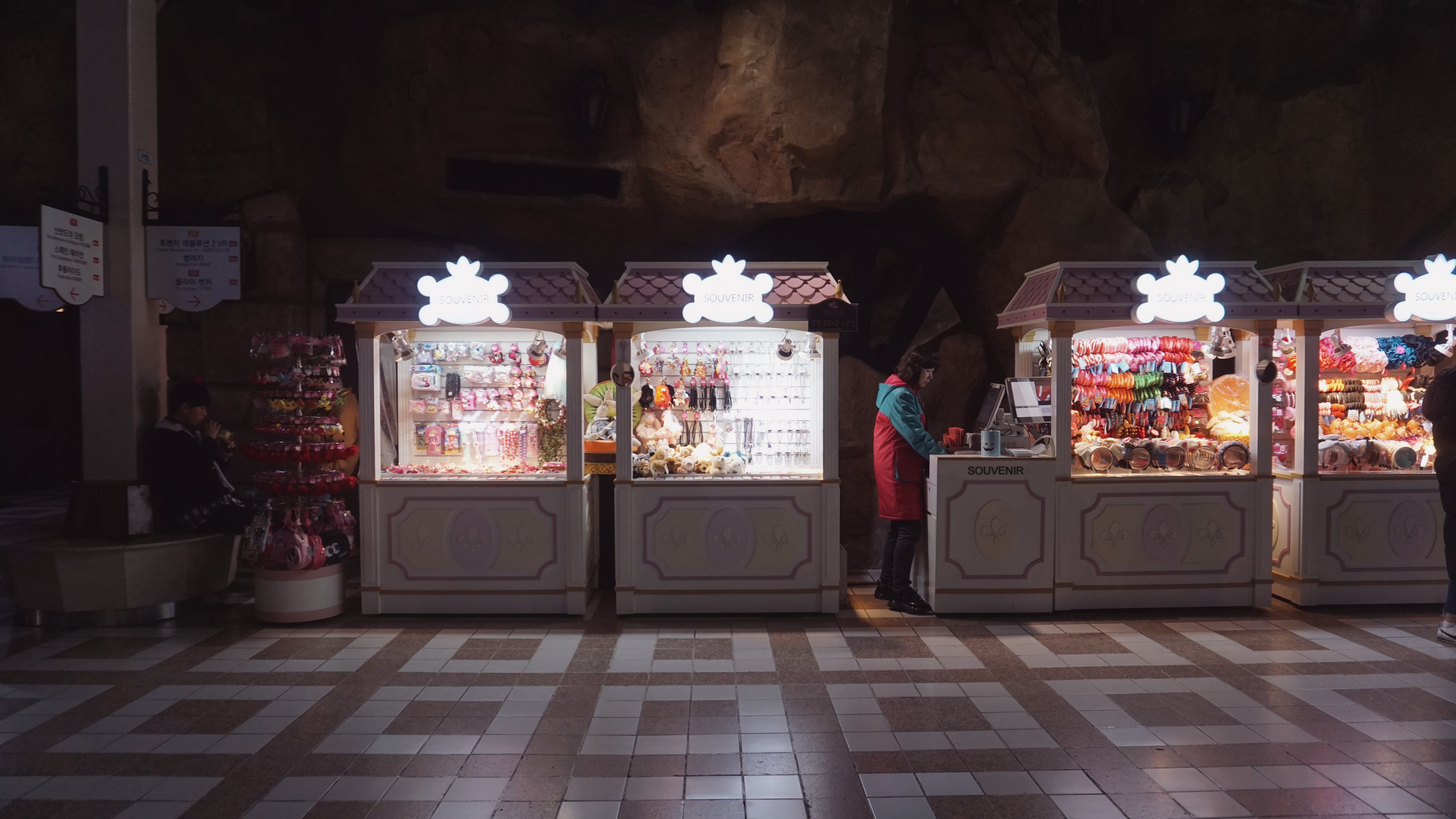 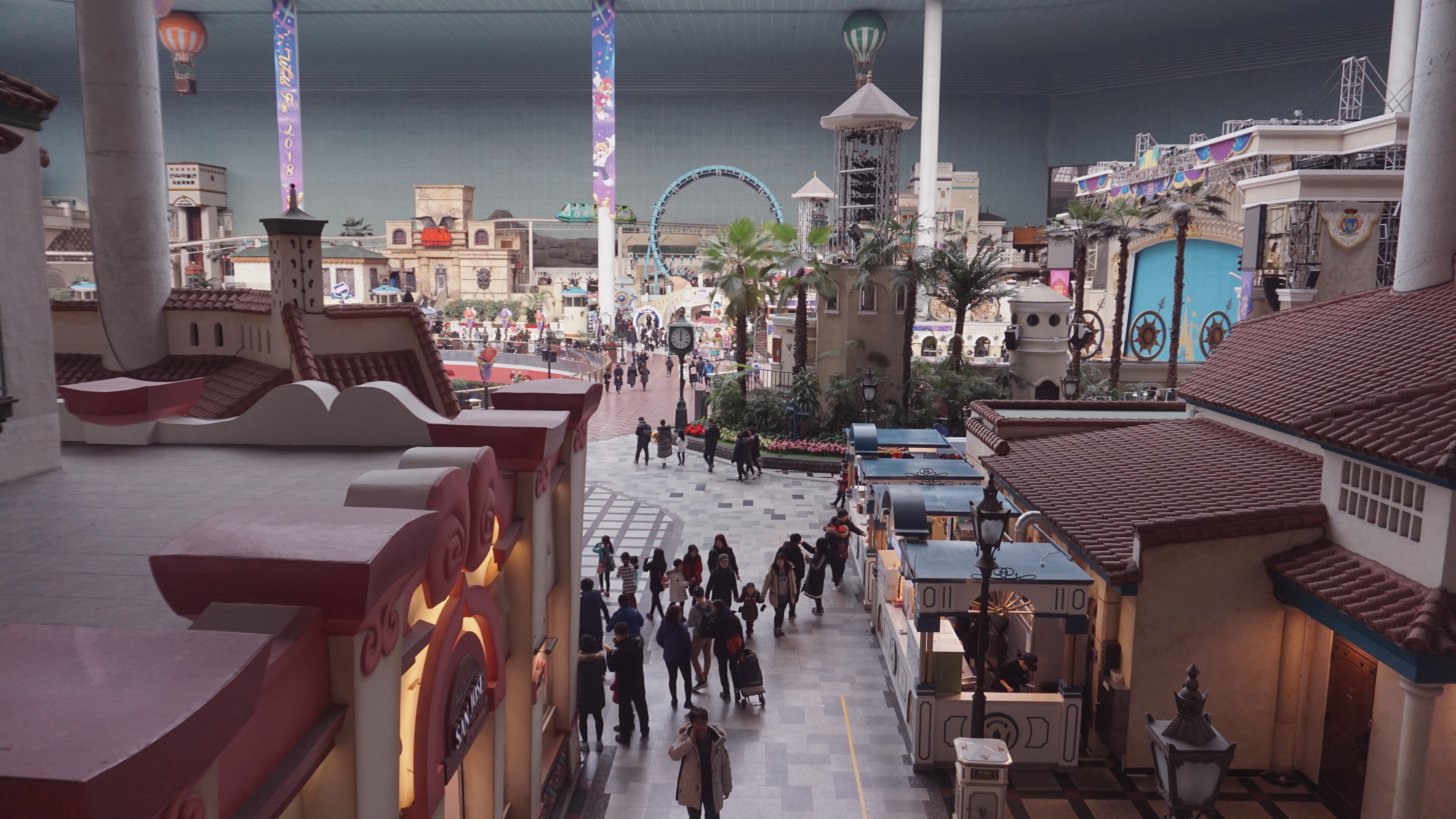 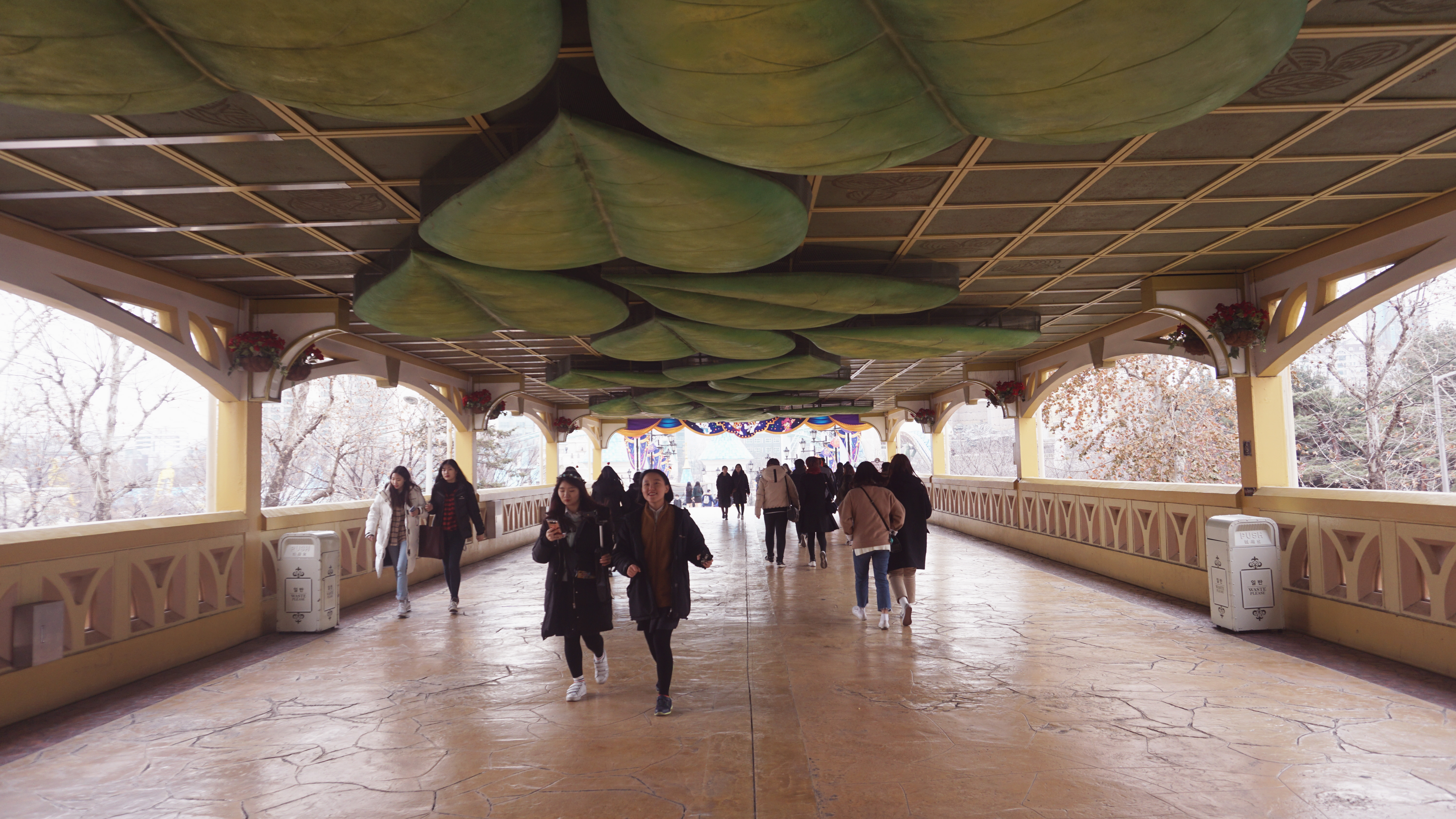 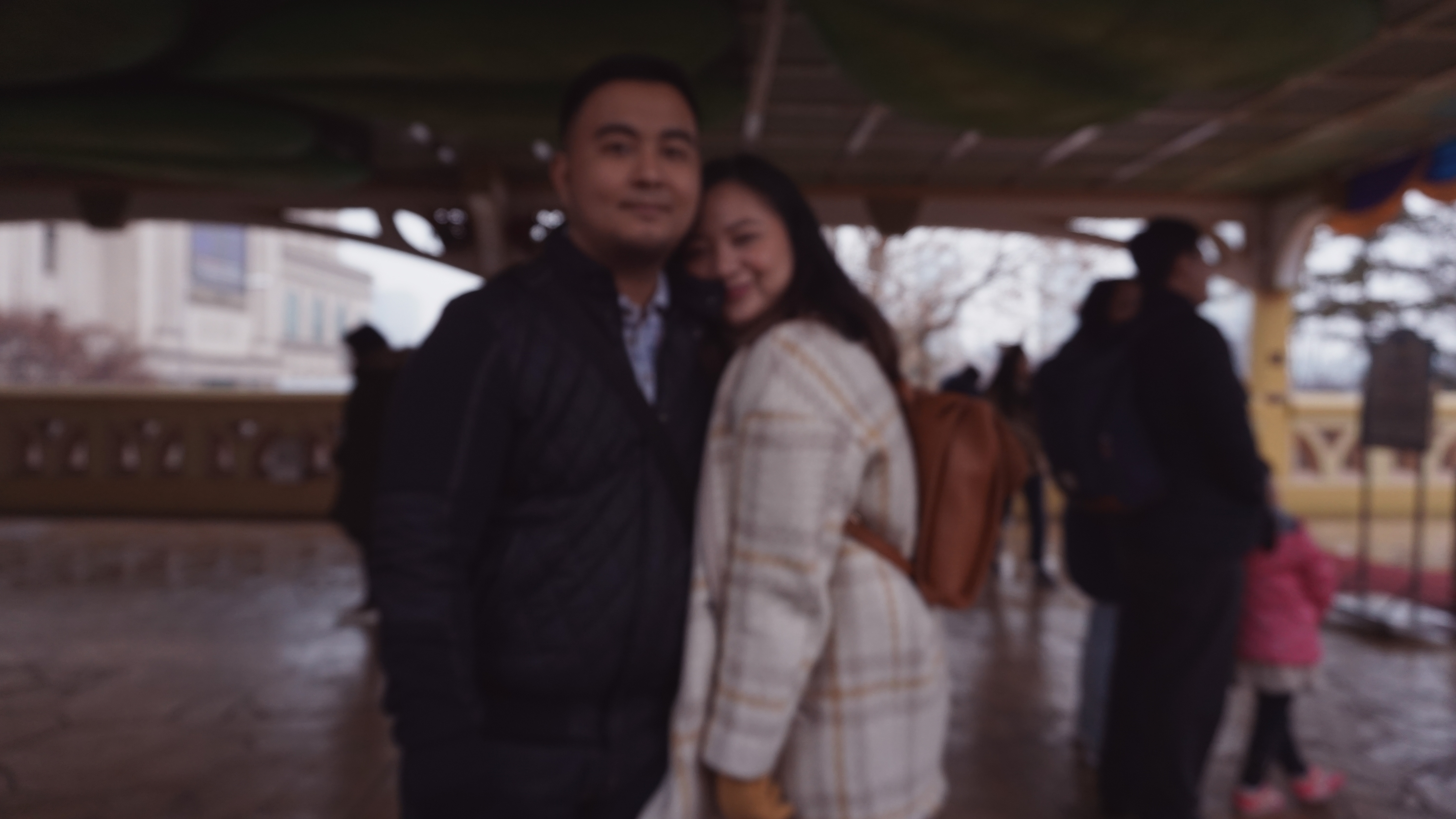 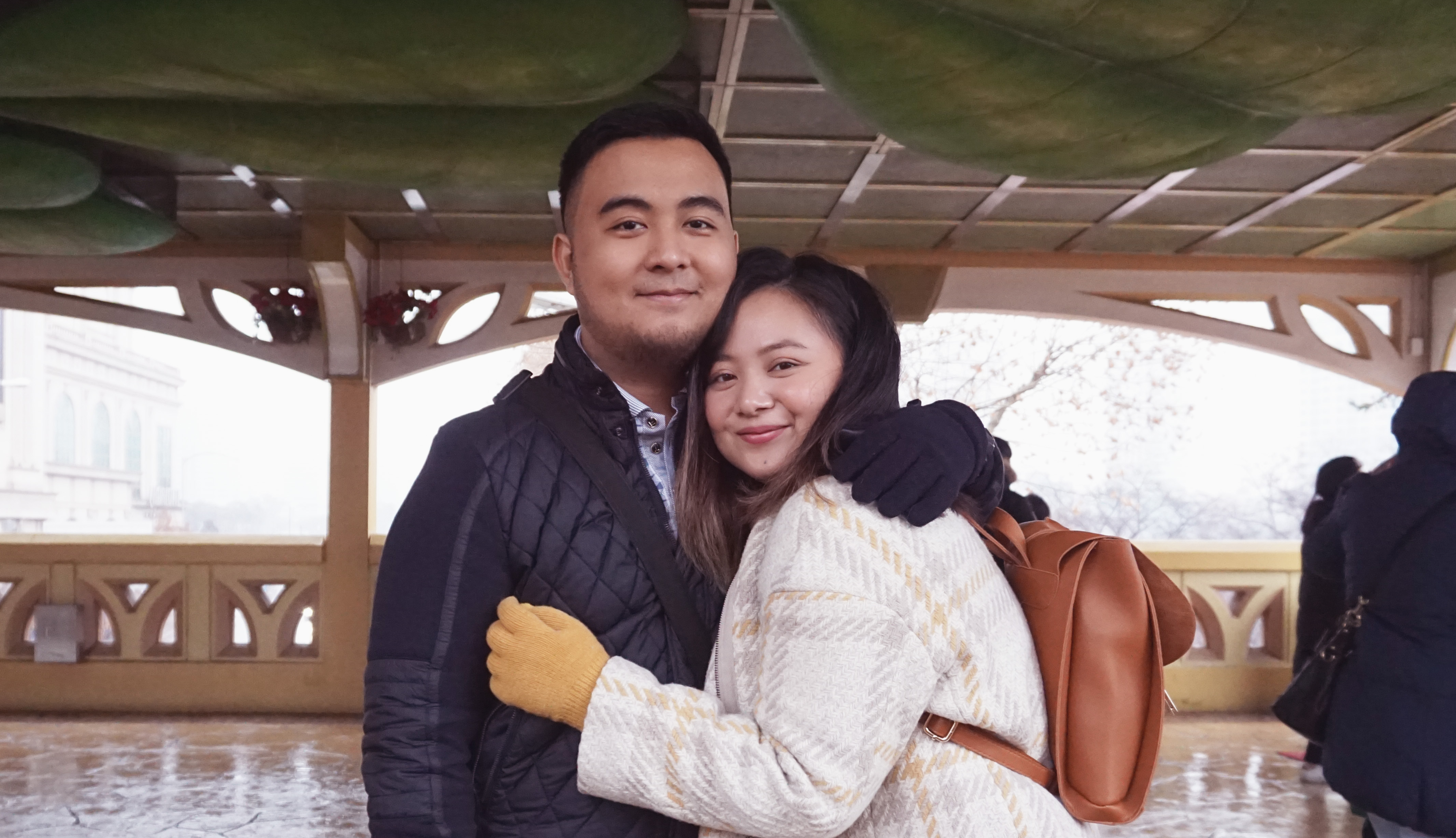 We explored Insadong to find something great to eat. It was freezing at this point, and the temperature dropped to -11. It was the coldest temperature we’ve ever experienced and it wasn’t even snowing yet (at that point). We were too cold that while walking the alleyways of Insadong, C simply went “babe, just pick one place and we’ll eat there”, so I picked the one we were in front of at the time. They had tons of set meals, but with a minimum of two orders per set. C is a picky eater, and I couldn’t find chicken on their menu, so we ordered a serving of bulgogi that was good for two people instead. When they brought out this huge pot of bulgogi, C and I didn’t know whether we’d finish it or not. But as it turns out, it was the best bulgogi we’ve ever had. So much better than all the yummy bulgogis we’ve come to love in our favorite Korean restaurant in the Philippines. We ate everything in that pot and did not regret how full we felt afterwards (and how much our metabolism went crazy from eating beef for dinner lol). 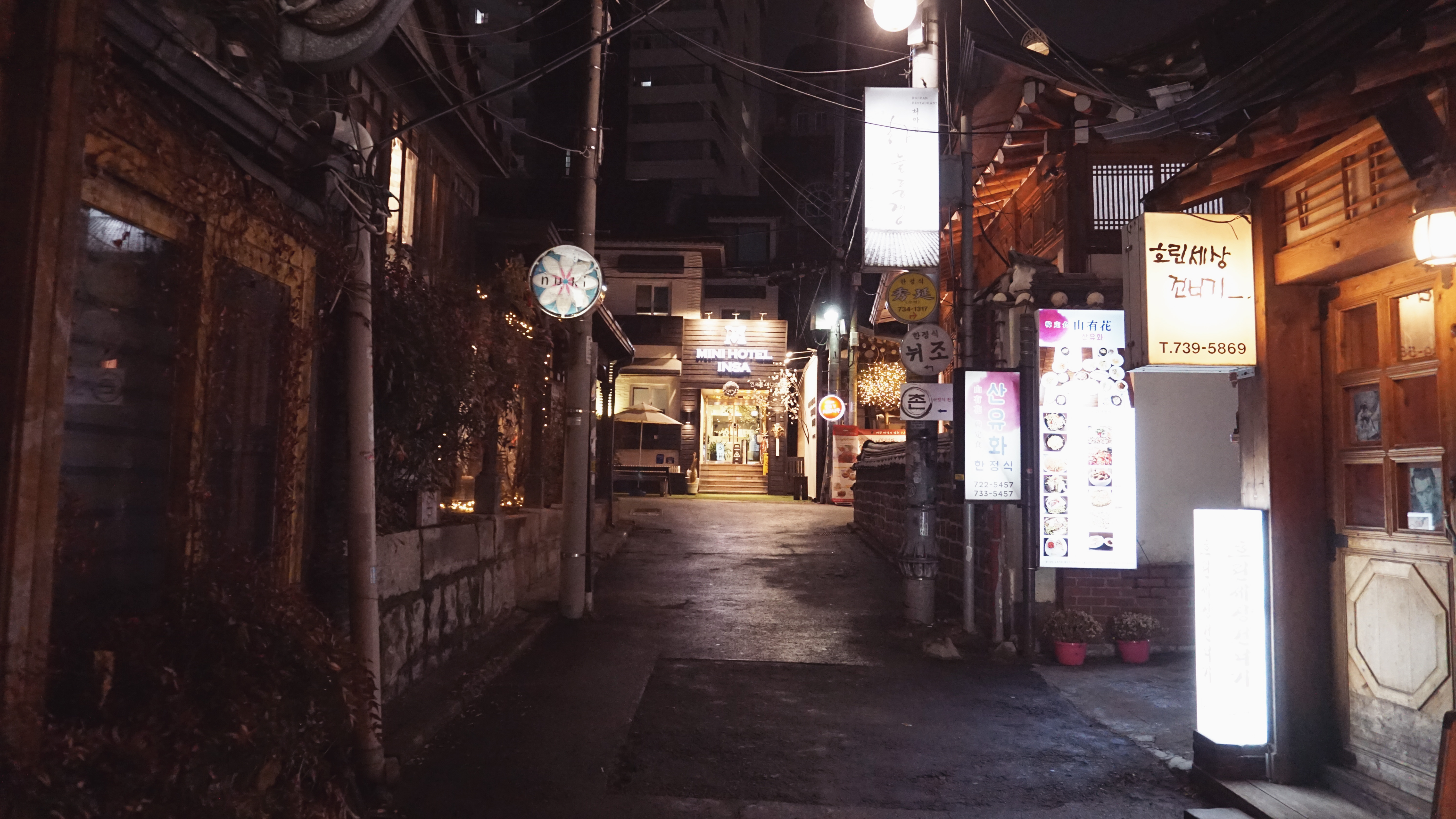 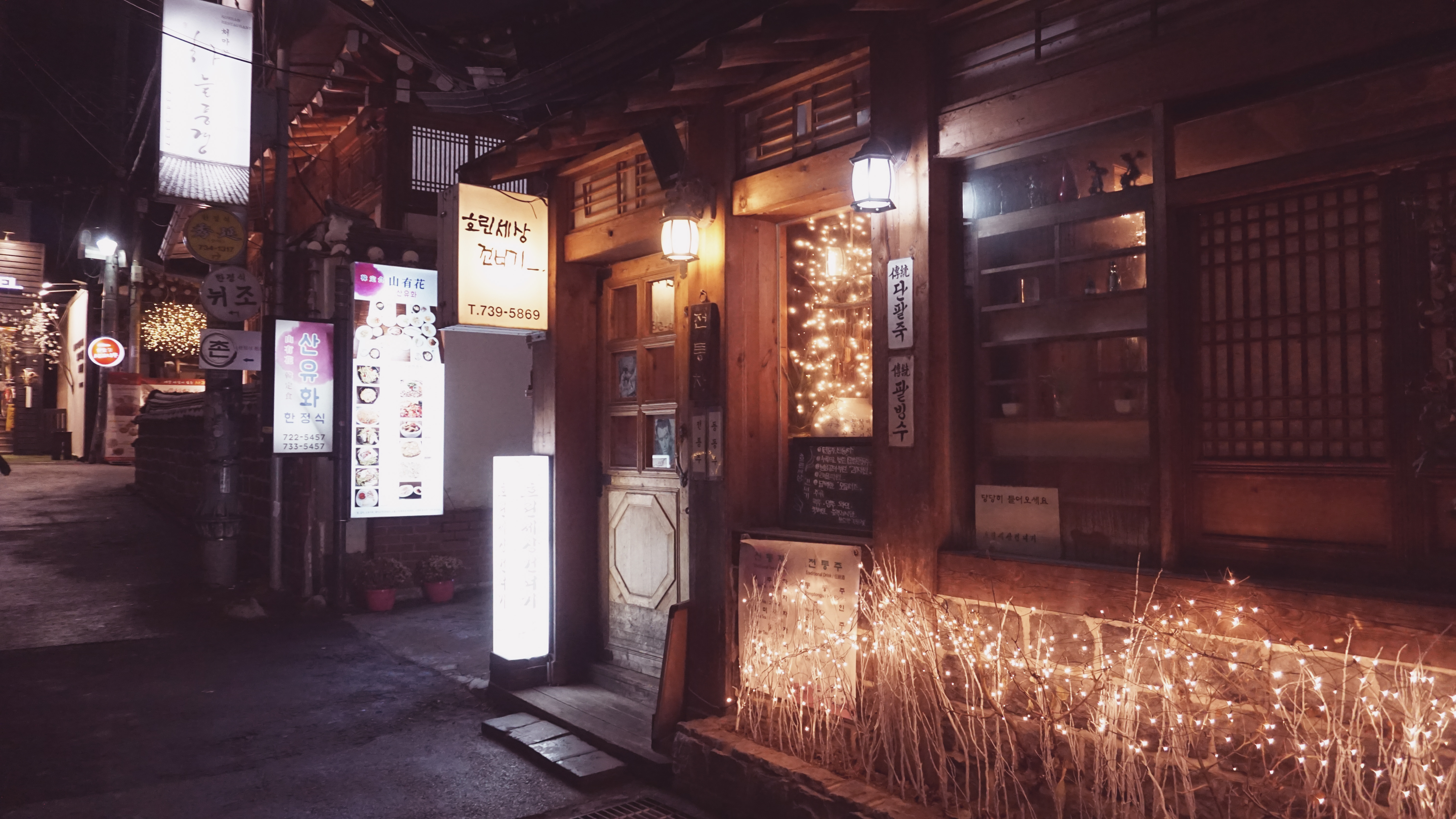 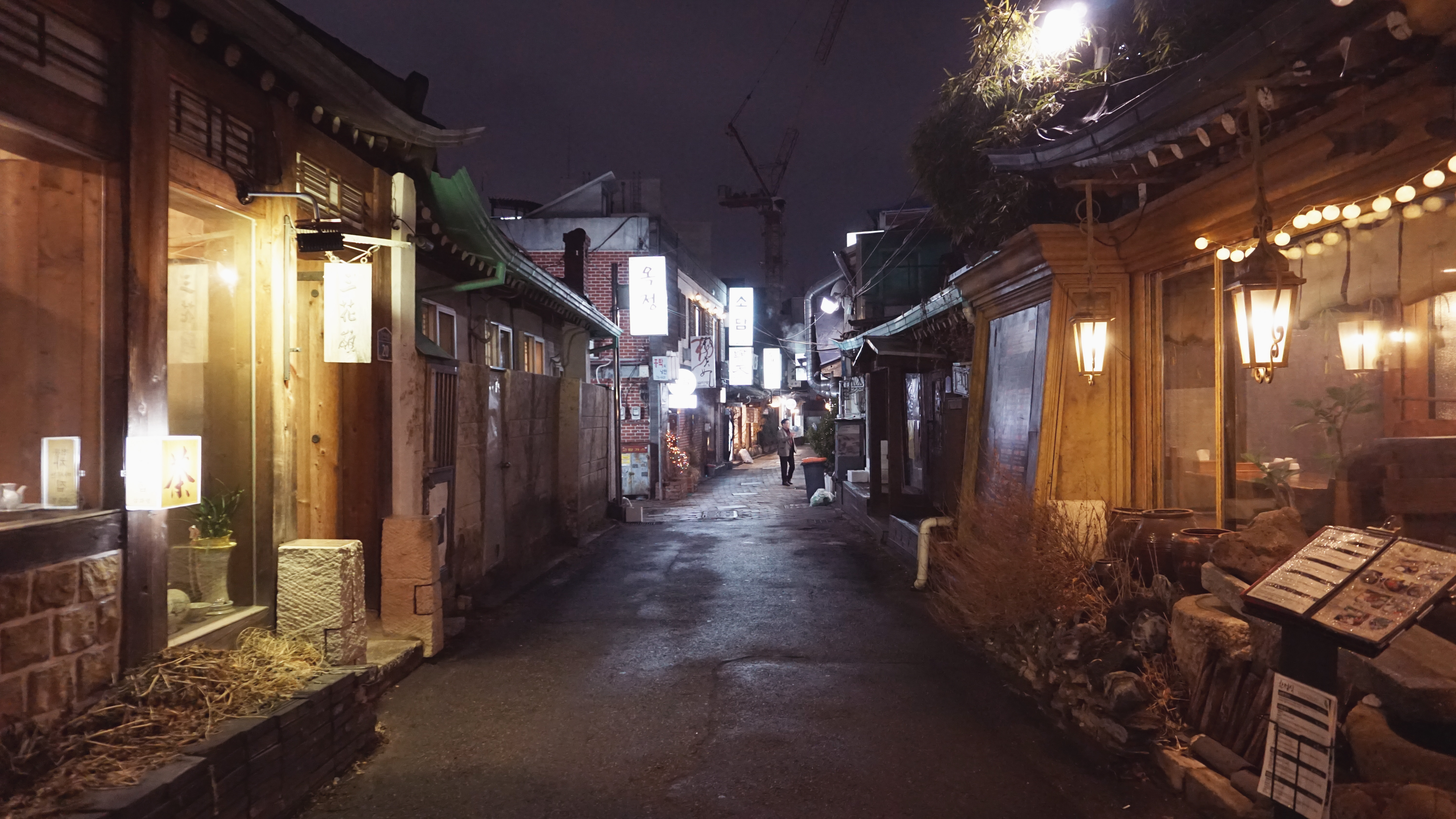 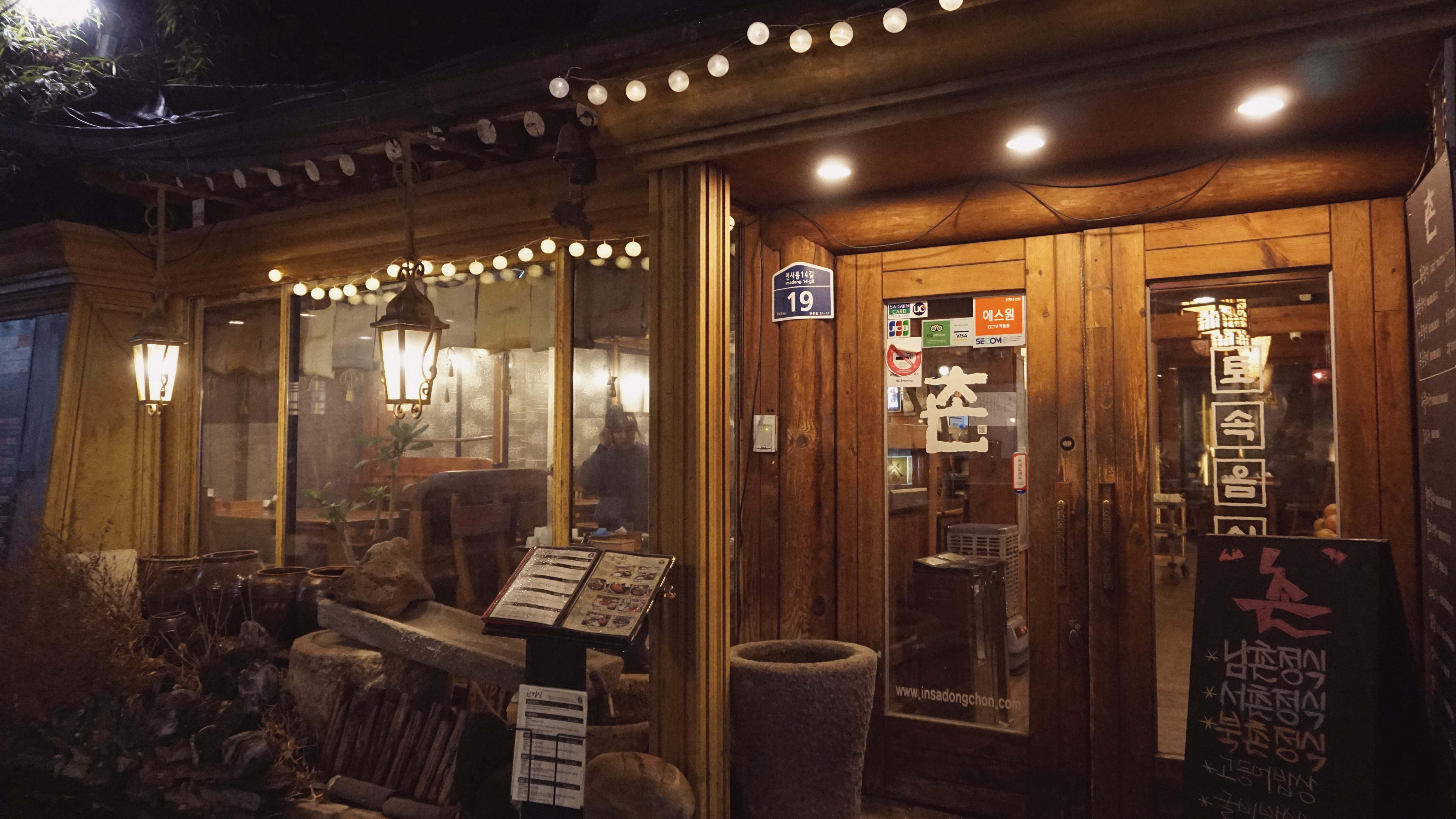 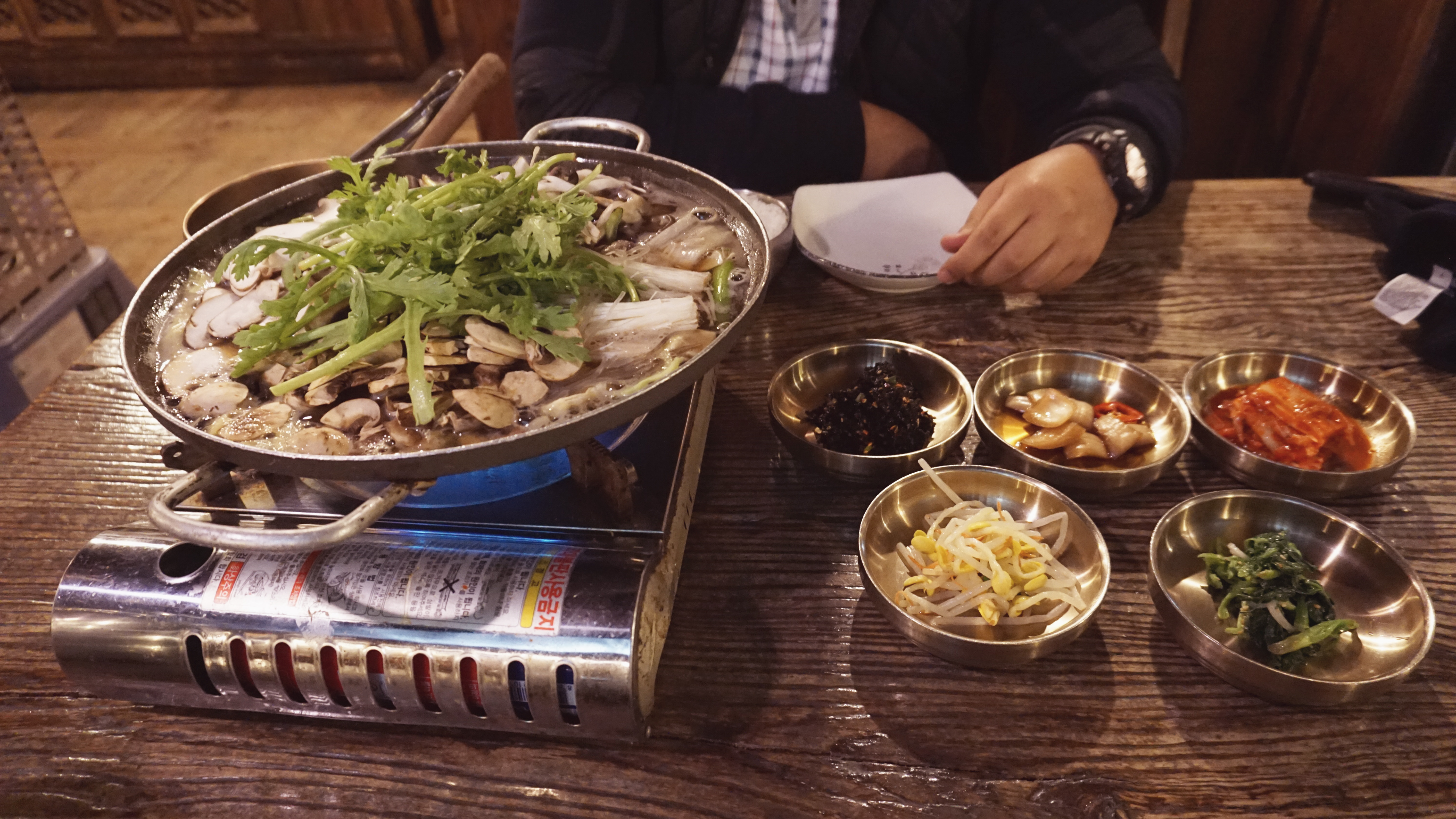 On our walk back to our apartment after doing our groceries (the ahjumma at the grocery were talking to us about the dangers of eating too many instant noodles, “you die early” haha!), we realized it was snowing! C and I were like two little kids who were so ecstatic at seeing snowfall. It wasn’t a heavy snowfall so I couldn’t capture snow actually falling on camera, but I took a photo of us walking on the street with some snow in it. It wasn’t my first snow experience, but it was different and weirdly romantic to be experiencing our first snowfall. Of course, I told him I loved him ala Legend of the Blue Sea (first snow fall “legend” and all, if only I can also look like Jun Ji Hyun or own her entire wardrobe). 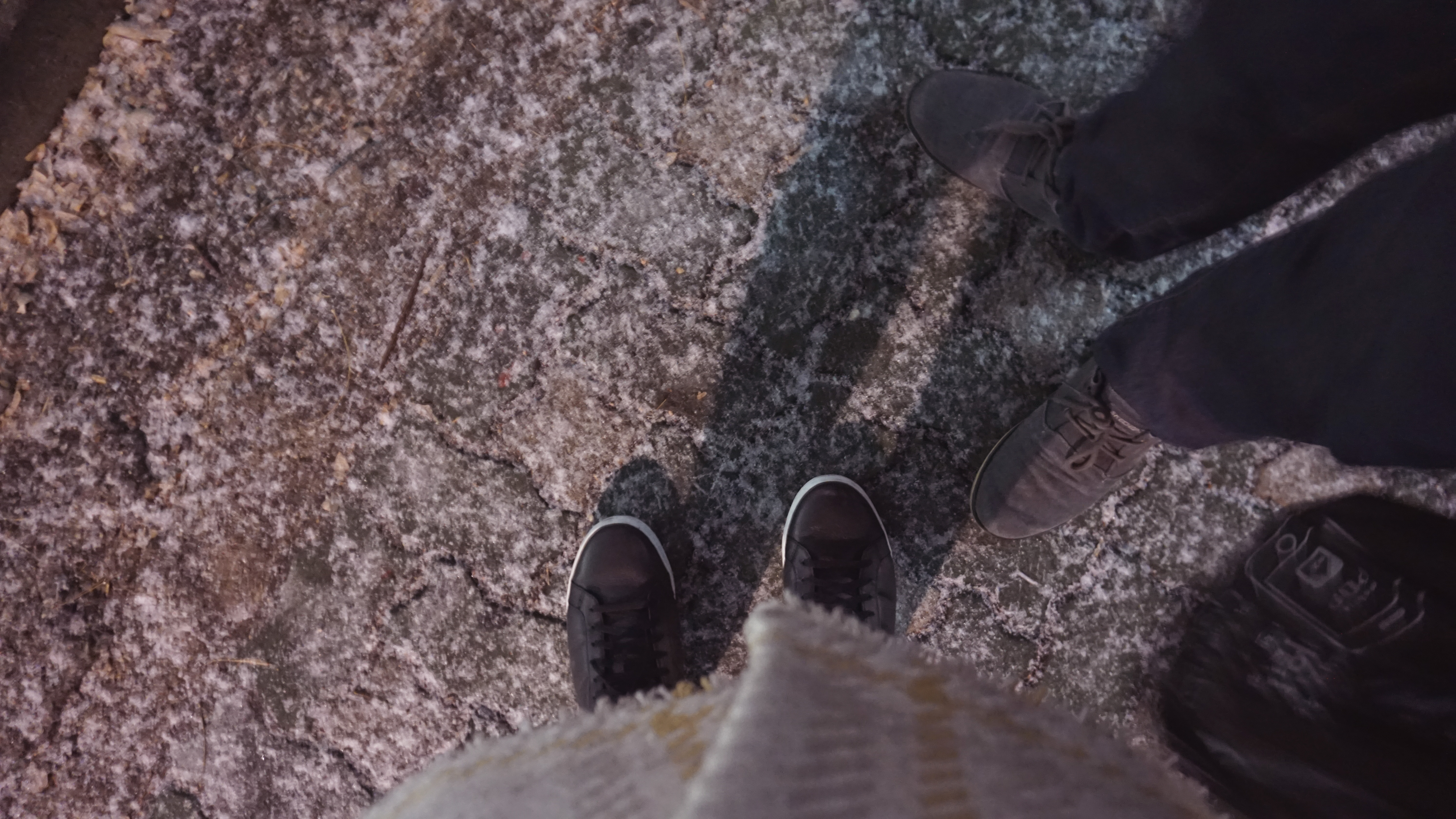 And speaking of K dramas, I already felt like we were in one because our apartment was on the second story of a coffee shop! It was so nice heading back to a coffee shop in the evening, buying hot chocolate for the both of us, and heading up to a warm apartment that smelled of coffee. I think I’ll be saying this repeatedly throughout this travel series, that we lucked out with our Airbnb. 🙂 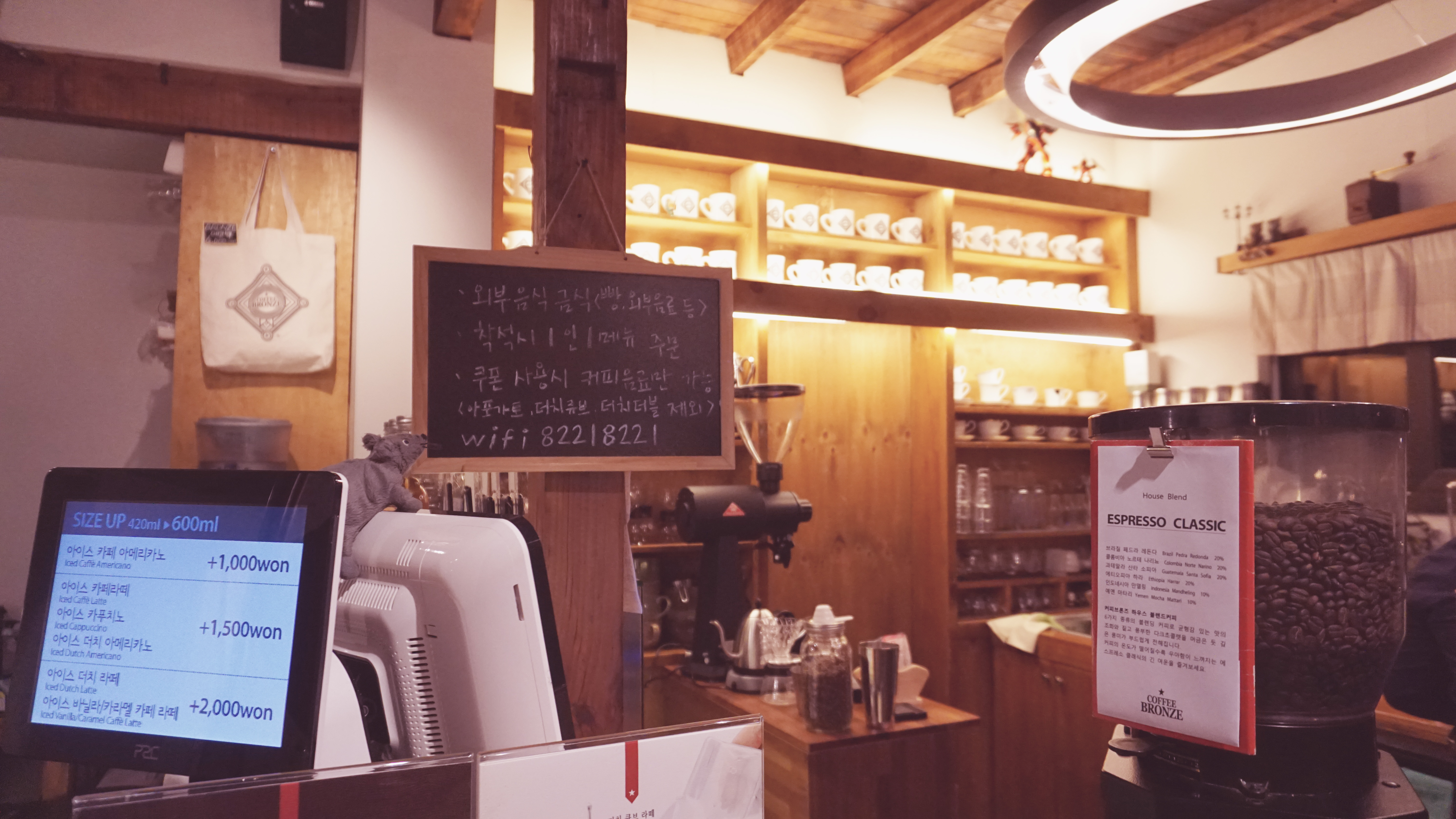 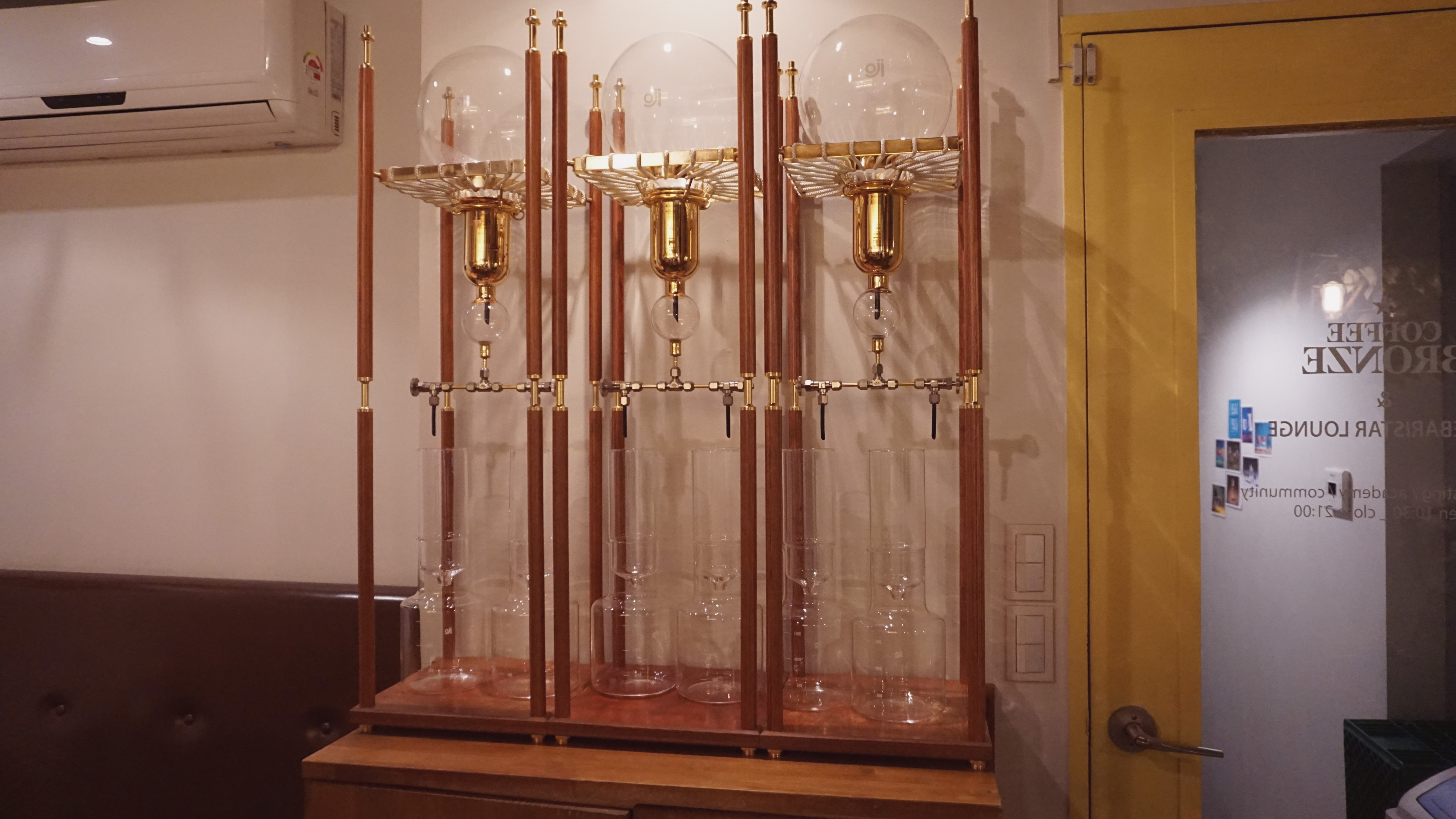 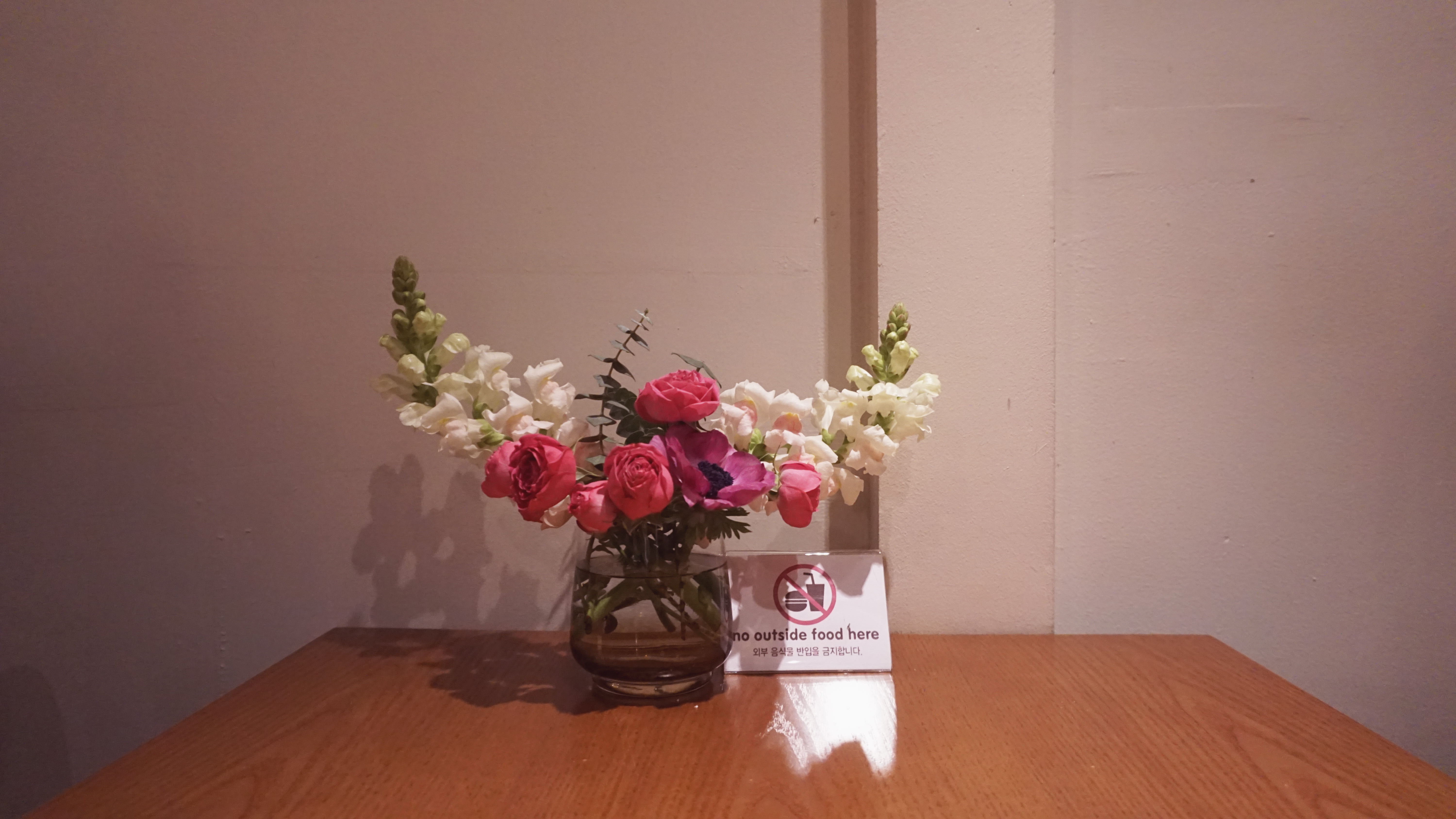 And that’s it for our second day in Seoul! I will try to update more often but I can’t promise to do so until I finally establish a routine where I can find some time to write something. *fingers crossed*

Note: This post contains affiliate links which means that if you book anything using that link, I get a small fee that will help me produce more contents like this. 🙂