It’s finally Tuesday and my second week at my new job! My first week was honestly slightly terrifying since I moved from a job where I was relaxed (too relaxed to the point where I only need around 15 hours of my 45 hour work week to do my tasks), to having to work independently while being responsible and accountable for actual project design and implementation. I went from 0 to 100 to handling responsibility even though I just onboarded and I literally have started having nightmares where I screw up at work.

A lot of people in my life thinks I travel a lot when in fact, the only reason that they have this illusion is that I only ever update my social media whenever I do. No one on Facebook/Instagram gets the nitty gritty of how I would work during holidays/weekends because you have to make that money girl. It’s mostly the same with my blog because a lot of my content is travel related but it’s in the posts itself where I write what’s currently happening in my life. While I normally would take a break before transitioning into a new job, I decided to just dive in head first and start as soon as I possibly can. Partly because I get antsy when I’m bored, and partly (if I’m being honest, for the most part) because I needed to earn money. Since I have a contract I needed to pay off (from my previous job), a wedding and a house to save for, trips to go to, and a lifestyle to fund, I simply can’t afford to be out of a job (and a payslip) for too long. There’s a lot of work that goes on behind the scenes of our life that we really don’t tell people about.

What we’re open to telling people about are our trips! There’s a Filipino idiom “makati ang paa” which translates to ‘itchy feet’ in English (lol), but it basically means that people with this syndrome like to go out, explore, and travel. Between the both of us, my feet are itchier and C would often say that he’d probably not discover a lot of the places we go to if we weren’t together. Since our anniversary (hence, our anniversary trip) falls during the summer season (in most places), his only request is that our next trip to be somewhere cold. Winter in Korea it is, then!

Contrary to my first experience flying with AirAsia, the plane was actually scheduled to depart on time and we boarded on time as well. What was unfortunate was that the queue to the immigration was CRAZY on the day we were slated to fly out. The queue went beyond the immigration area and the end snaked all the way near the check-in counters at the airport. It was crazy. Can’t be more thankful that C likes to be early to everything (which usually annoys me because we’re always in the airport 4-5 hours early). It took us two full hours just to get through immigration. Two hours!!! It was worse than flying out during the holidays. This was the first time C and I flew out on a weekend, and we don’t plan on making a repeat. We had to sit on the plane for more than an hour while the ground staff rounded up the passengers that got stuck in the immigration nightmare. BUT finally stepping foot in Seoul (even if we haven’t left Incheon Airport yet) took all of the negative feelings away. We’re finally on a winter trip that we’ve wanted to go on for quite a long time! 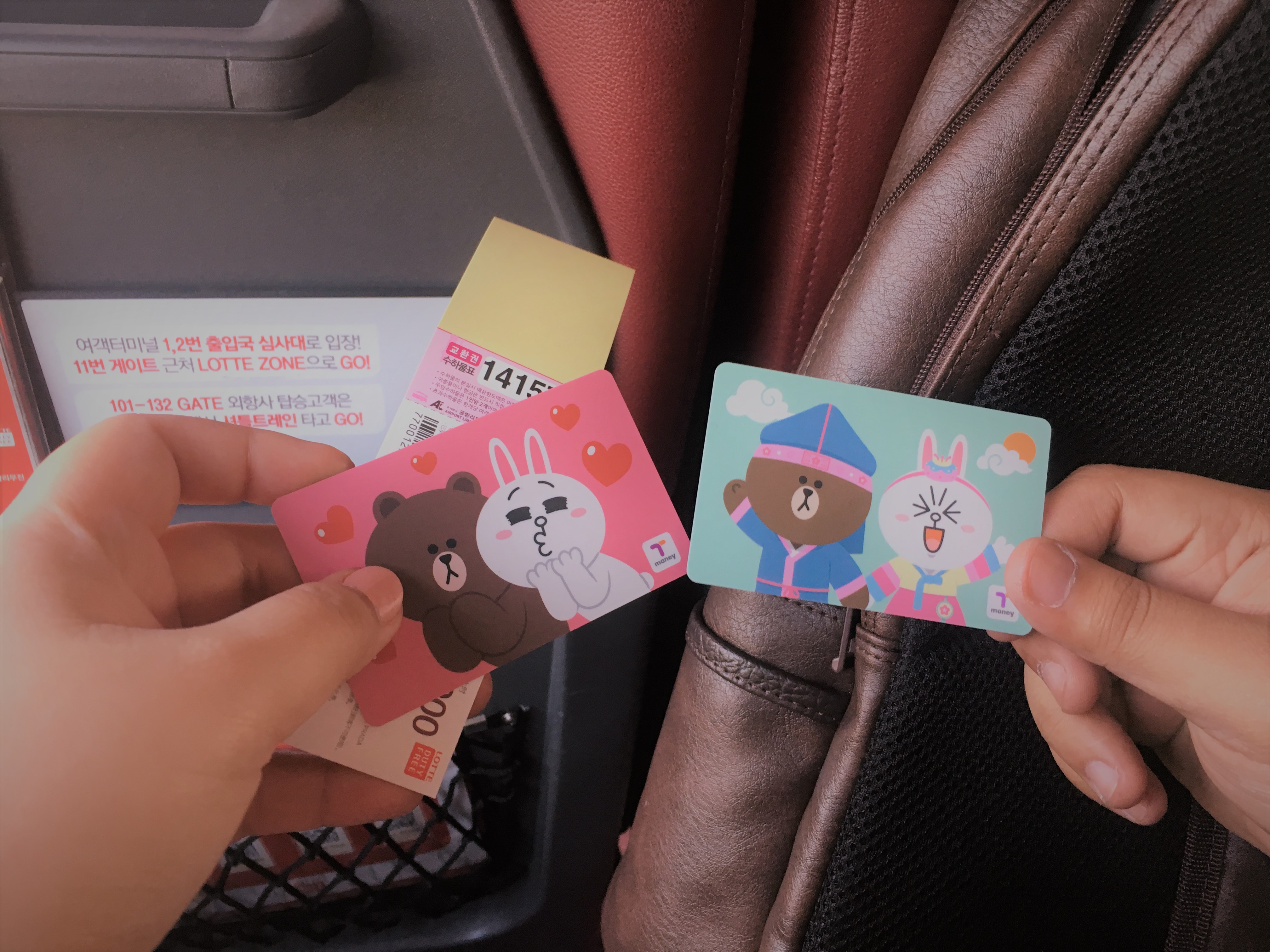 Our apartment for eight days was located in the Insadong area. I really wanted to stay in that area because I personally prefer staying in low rise places compared to the usual condos you can stay in near Myeongdong, it’s quiet, the area is filled with traditional houses, but still within the vicinity of most places we wanted to visit (we can take a cab to Myeongdong and not spend more than 3,500 won which is still quite expensive but sulit, if there are four of you sharing the fare since minimum fare, is 1,350 won). It was a little past noon when we got there, so we freshened up and bundled up, before heading out to find lunch. It was also 3 degrees out when we arrived which is the perfect winter weather in my opinion. It’s cold enough but still manageable for us tropical people. 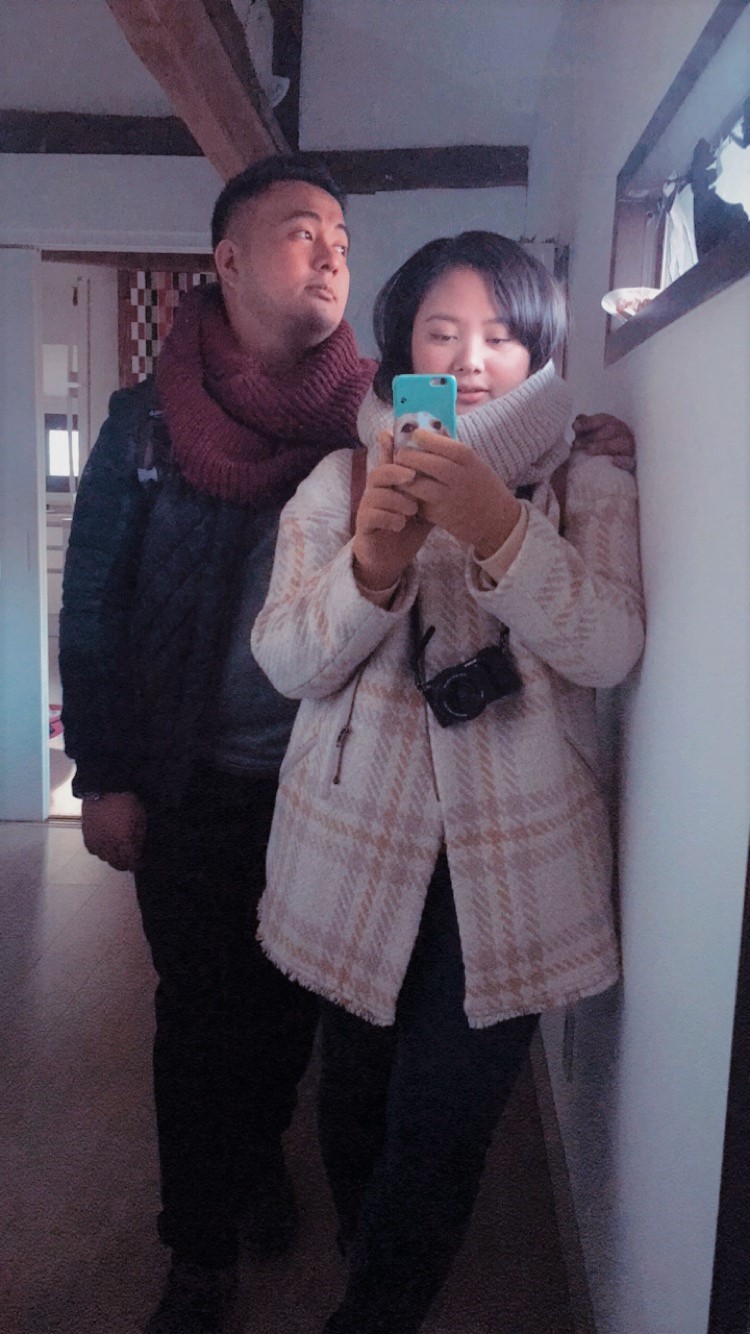 Instead of finding food immediately, we ended up walking around Insadong as I try to show C where I bought the souvenirs I got from when I was last in Seoul. If you’ve been a long time reader of this blog, you’d know how much C gets annoyed with walks that I plan (mostly because I can walk the entire day as long as it’s on a flat terrain, and because his hygienic practices are borderline excessive so sweaty shirts are a no no for the day). But he surprisingly had no walking-related complaints the entire time we were there! Since it was cold, he didn’t bust out a sweat and he smelled fresh the whole time we were out and about (until we start eating, so we had a spray bottle of generic-Febreze). 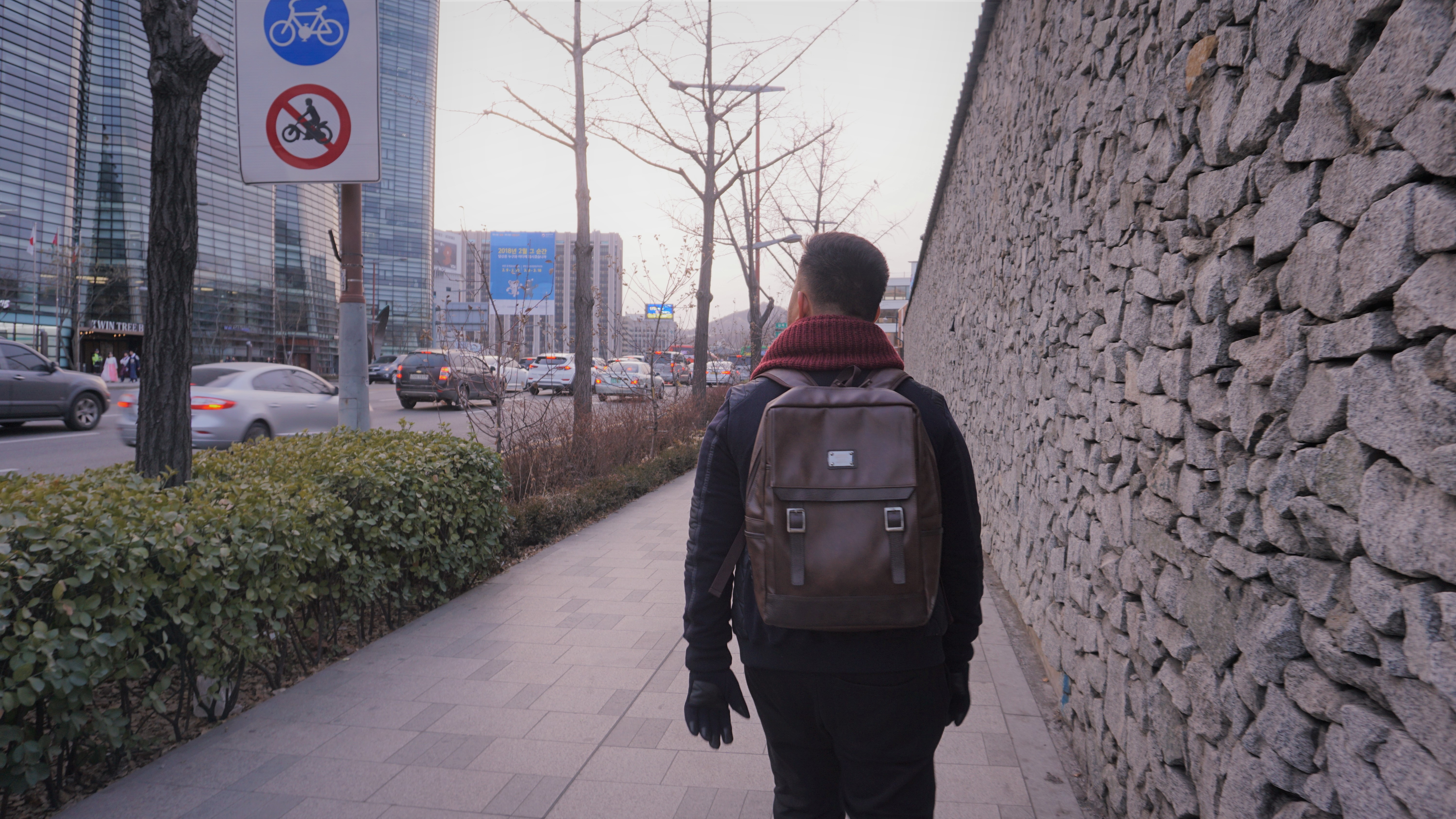 Our lunch ended up as dinner, and I dragged him to Tosokchon. Samgyetang is hugely popular in Korea, and whenever I searched for popular chicken dishes in Korea, this always come up. Tosokchon is famous for it and during meal times, this traditional hanok turned restaurant gains quite a queue. We were lucky that we were seated minutes before the restaurant filled up with diners. Samgyetang is chicken ginseng soup – they fill a young chicken with ginseng and sticky rice. I’m not a huge chicken eater, so I went and ordered Pajeon (Korean pancakes). The serving size was huge but a bit pricey (less popular restaurants serving local cuisine cost less than 10,000 won per person, depending on location I guess). C, unfortunately, was not a fan of the chicken soup, and I was a bit disappointed that our first meal was a miss. 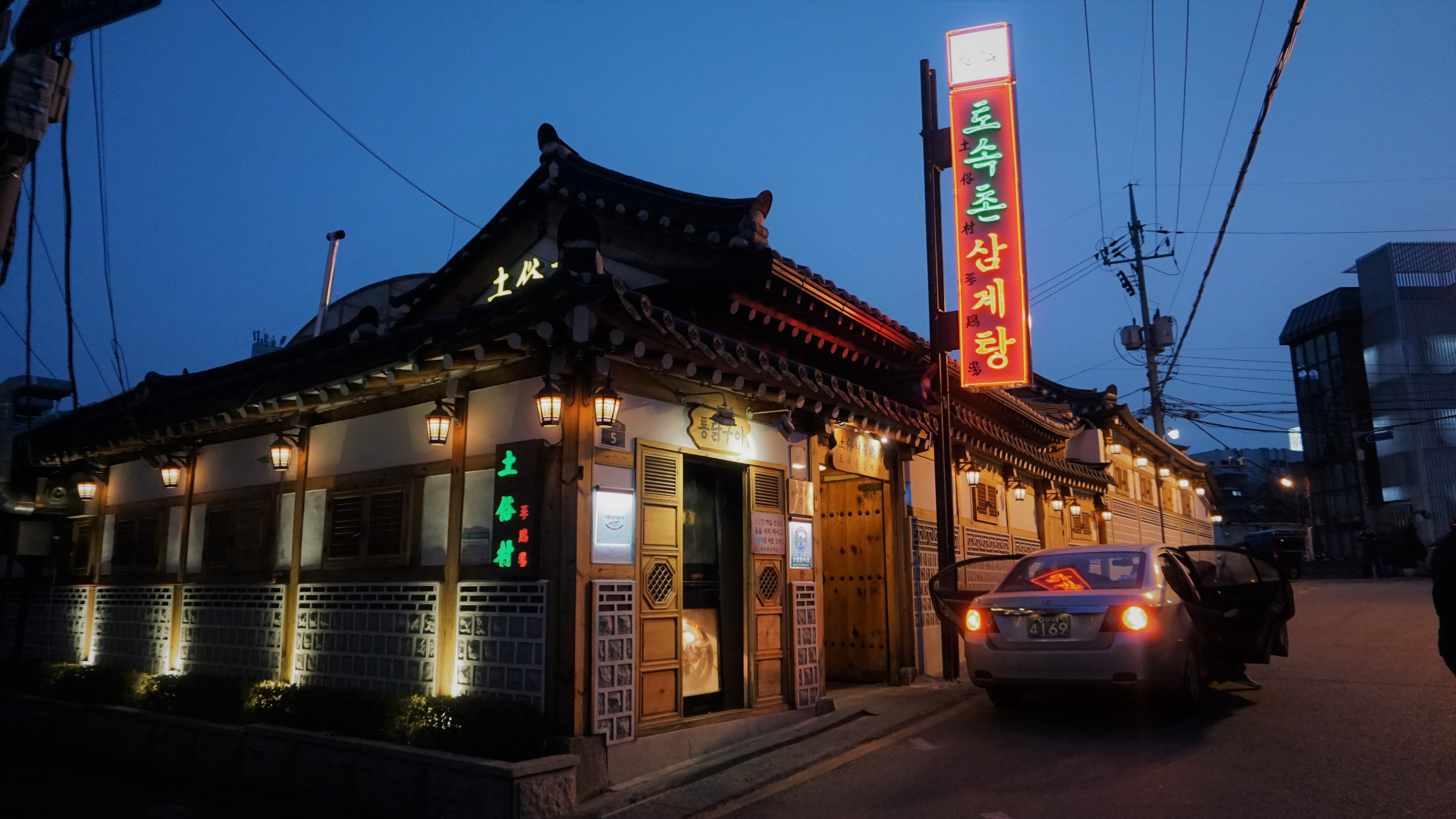 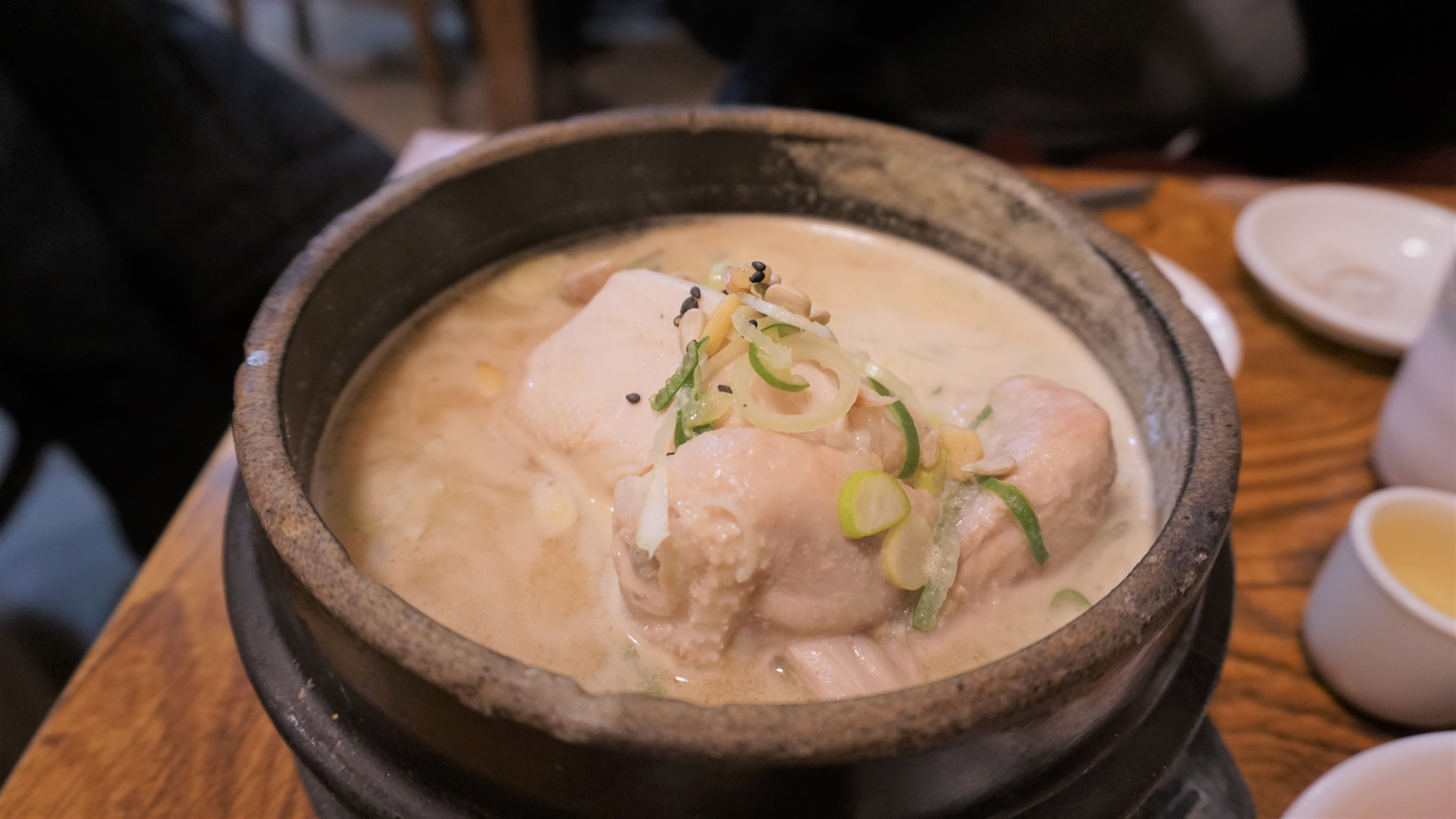 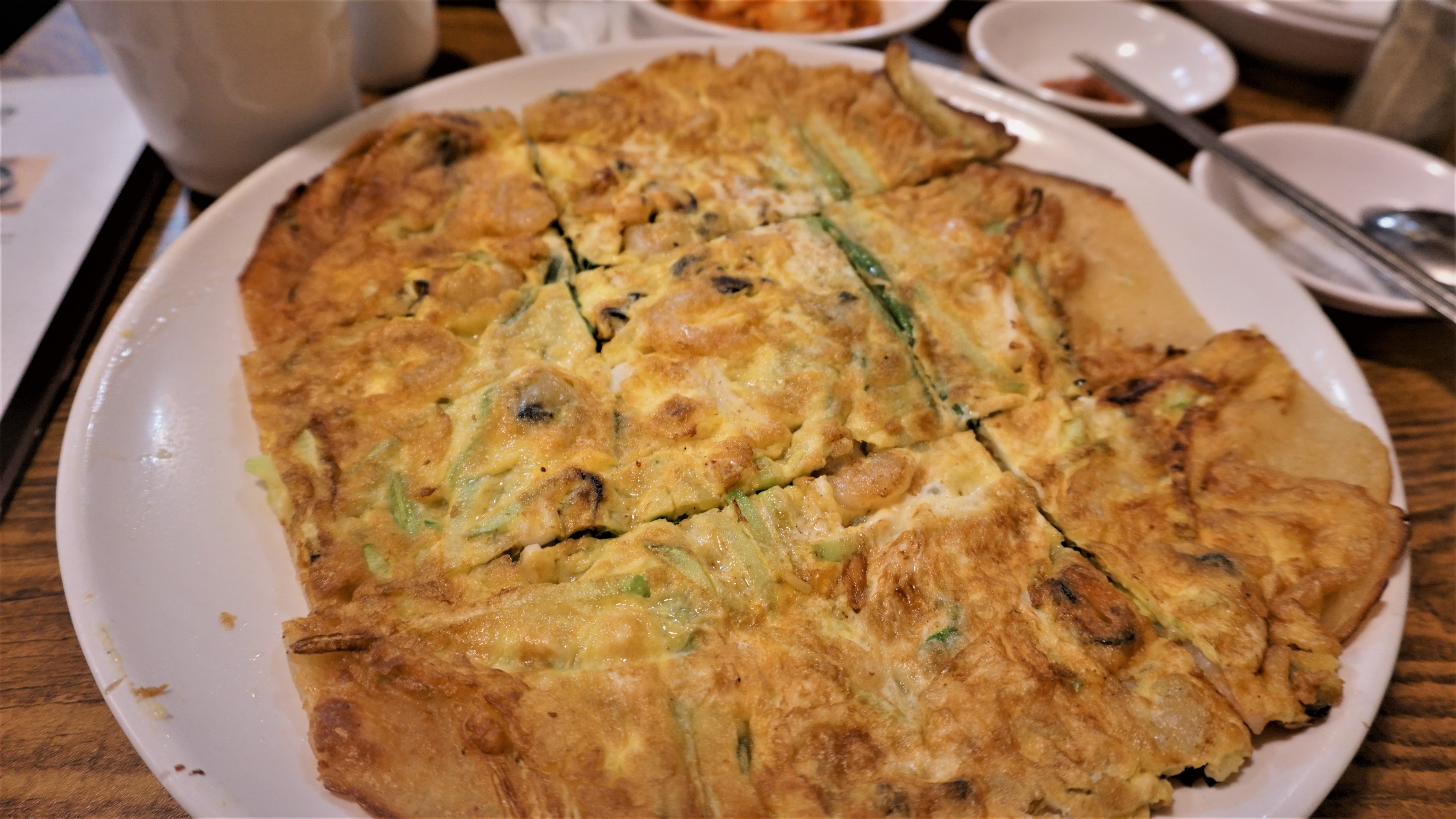 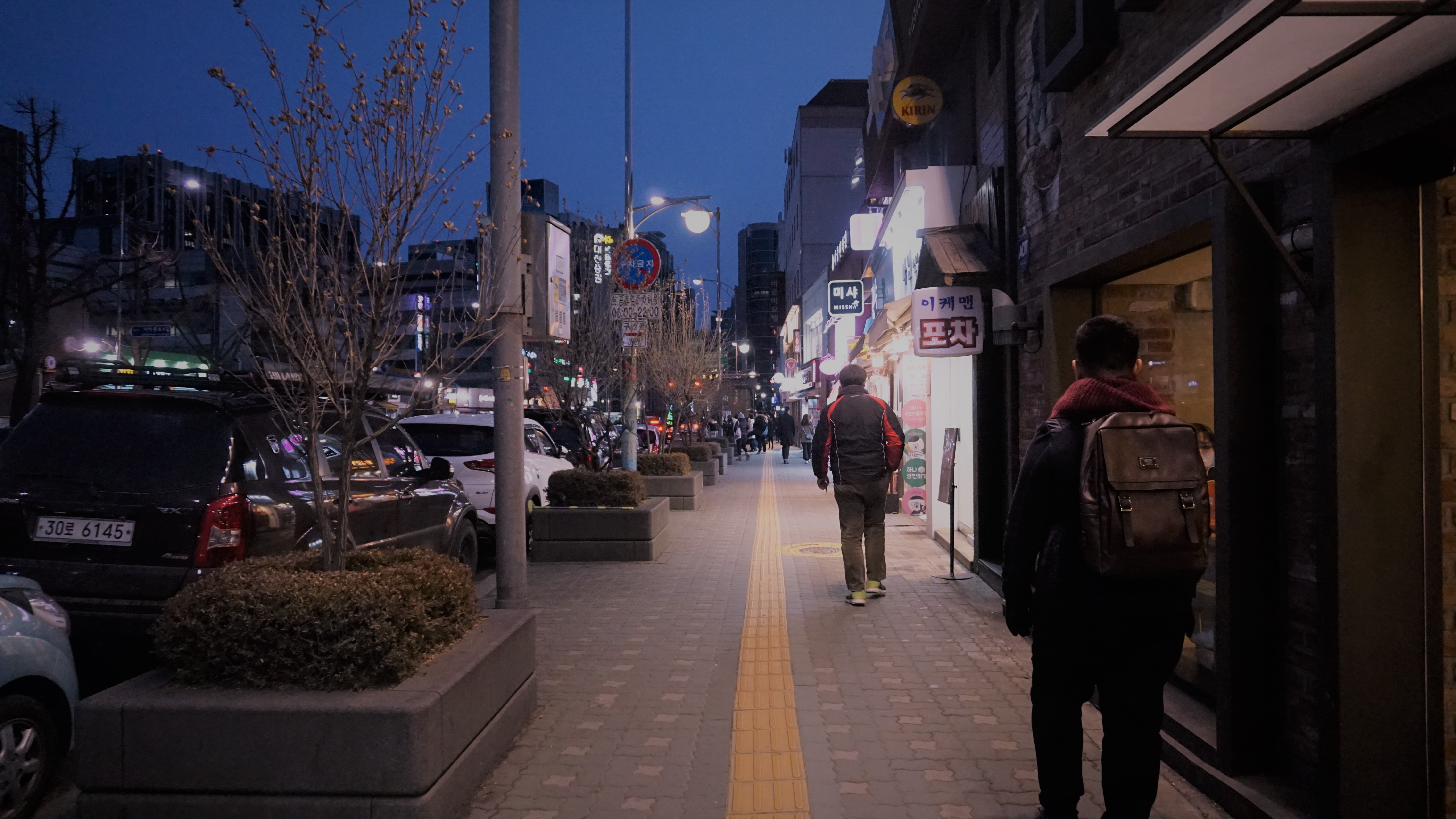 We walked around some more before taking the subway to Dongdaemun History & Culture Park. I really wanted to see the LED roses they have on display, and it was a pleasant surprise to find that there were more to see aside from it. Hyundai put up an outdoor ice skating rink, while also promoting the upcoming Pyeongchang Winter Olympics (as of writing, it’s currently ongoing). While ice skating was definitely on our winter bucket list, we wanted to head somewhere else to try it out. I’m putting out a spoiler though: we didn’t get to do it because the outdoor rink we wanted to skate in closed a few days before we arrived. Ugh. We should have grabbed the chance to skate here, as it already looks magical with all the lights put up. 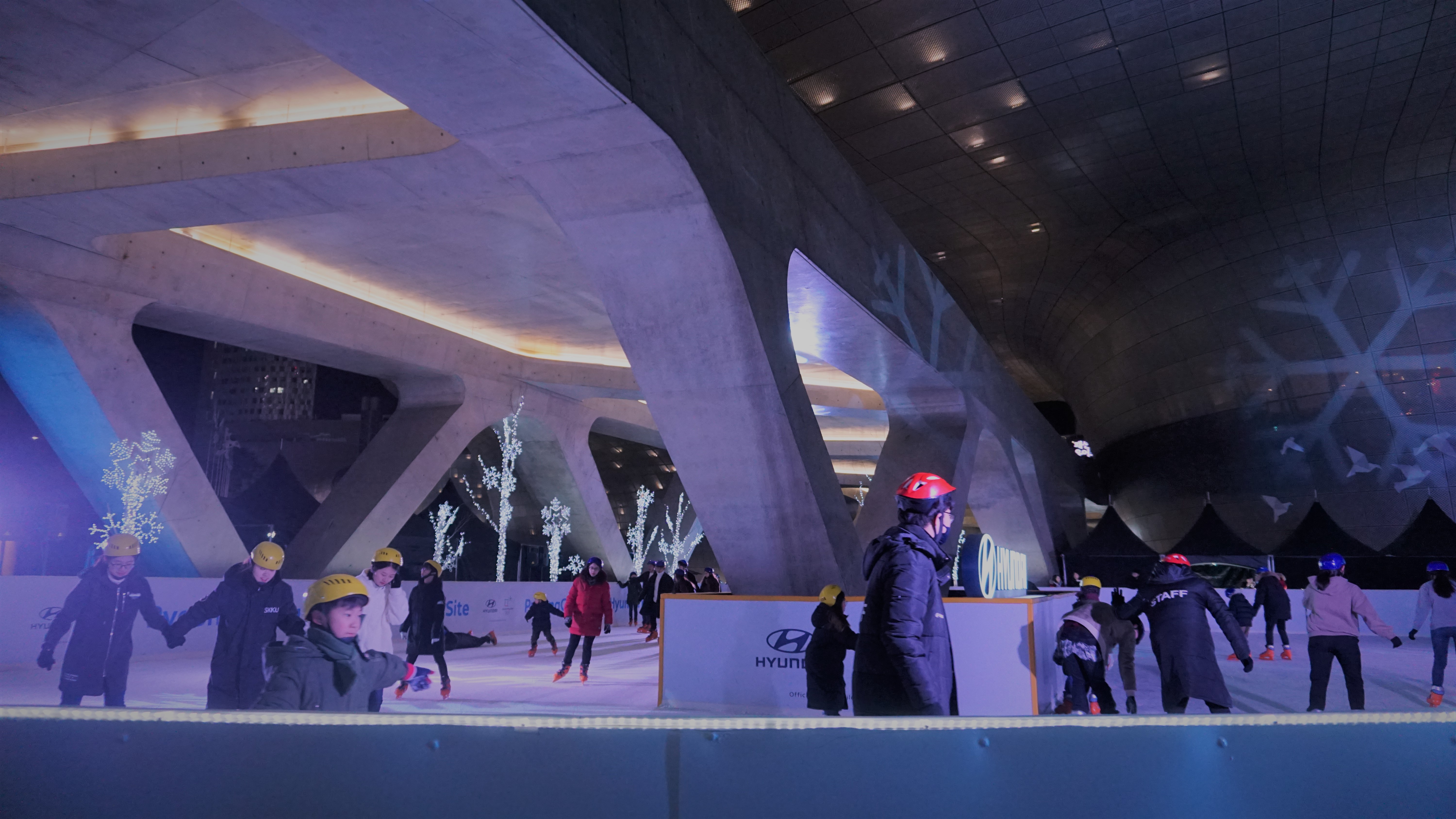 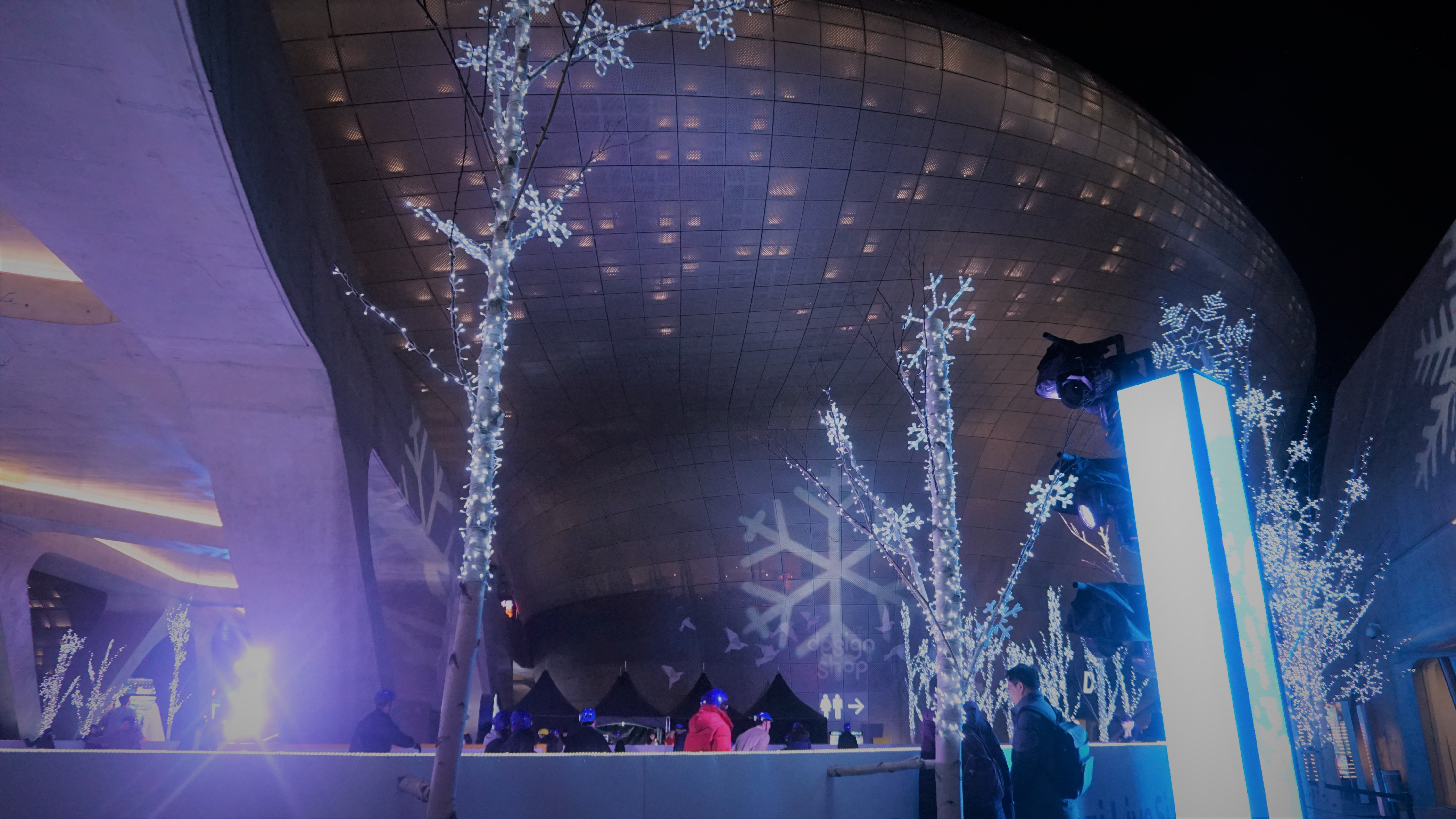 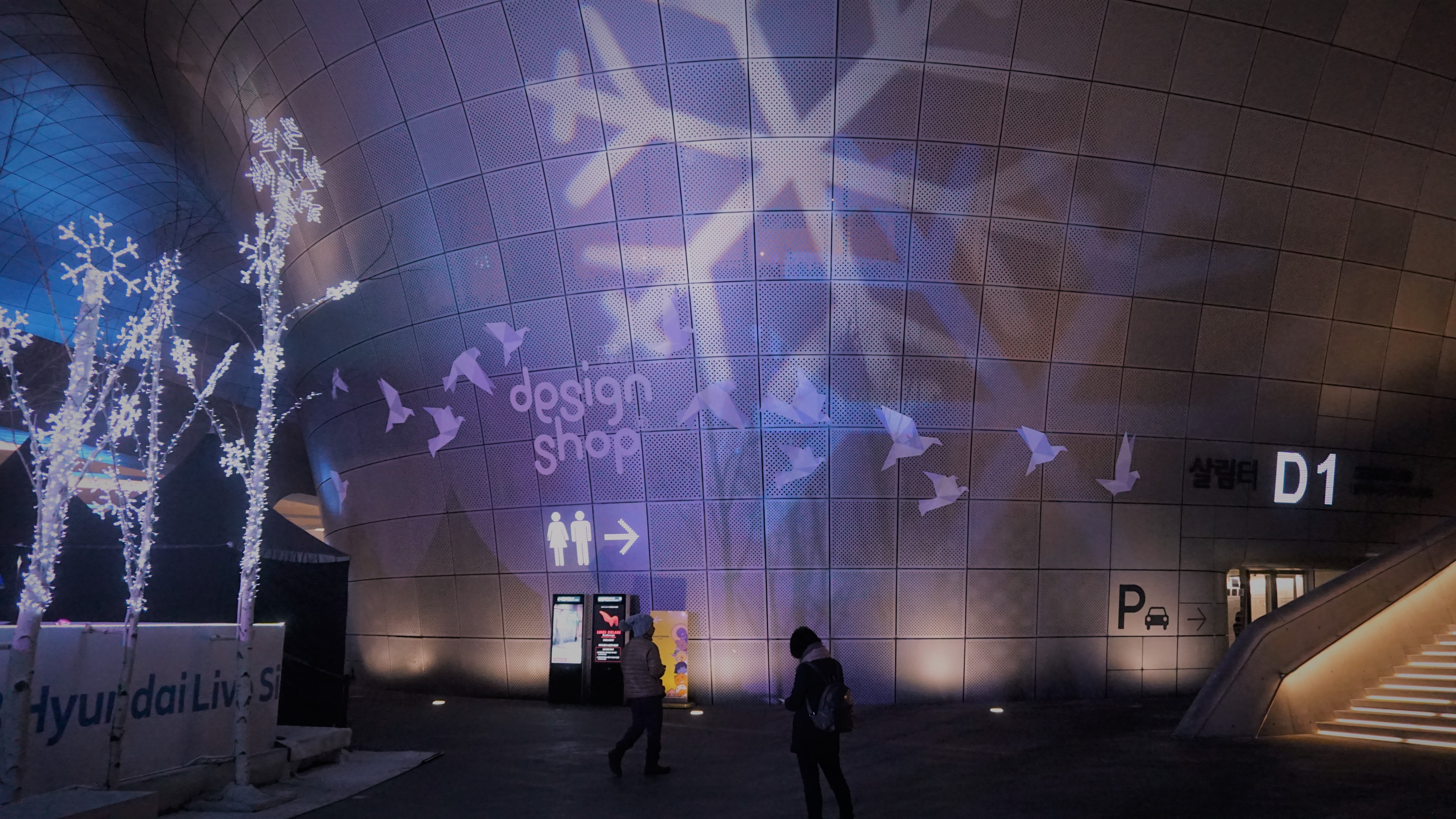 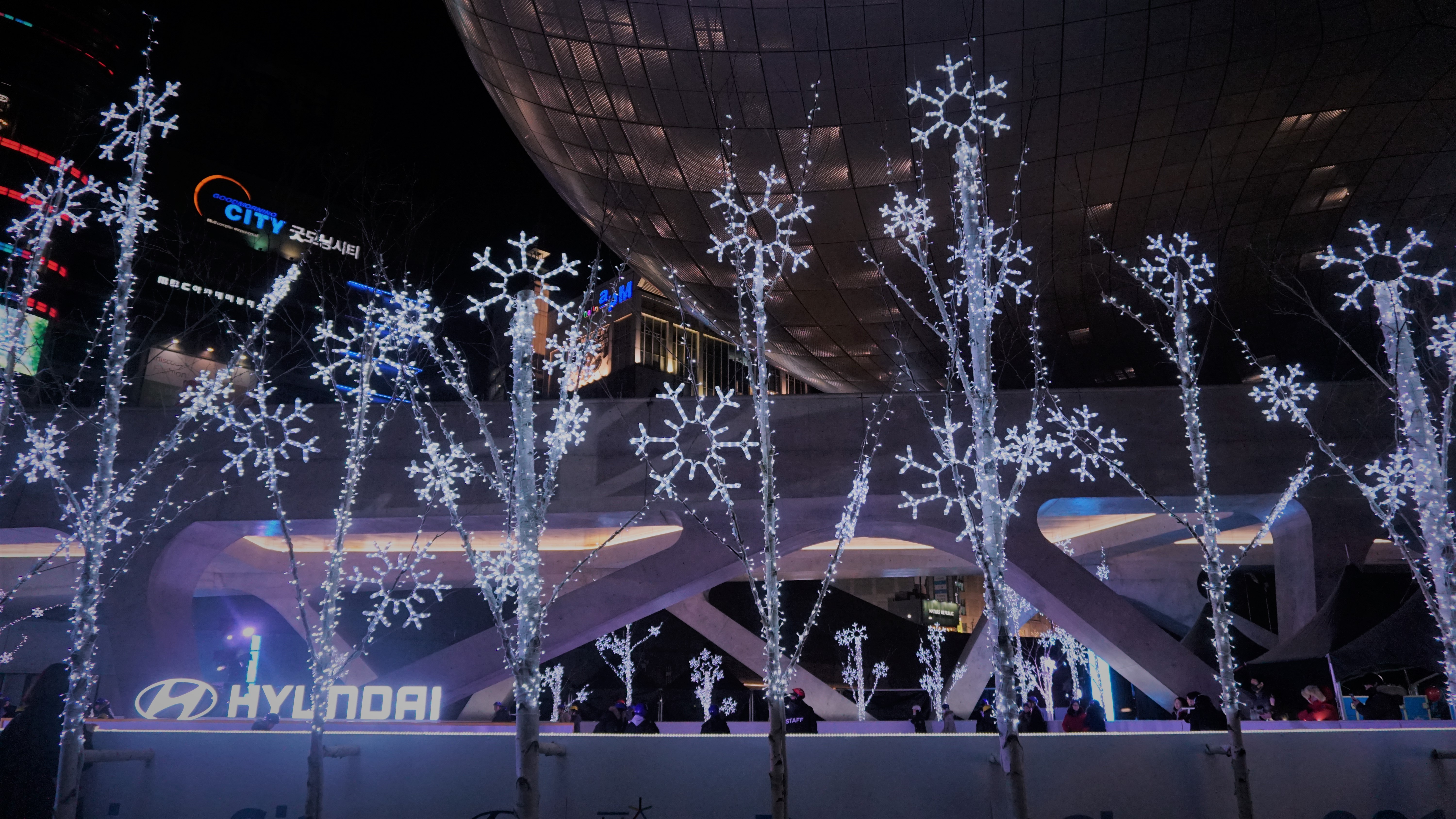 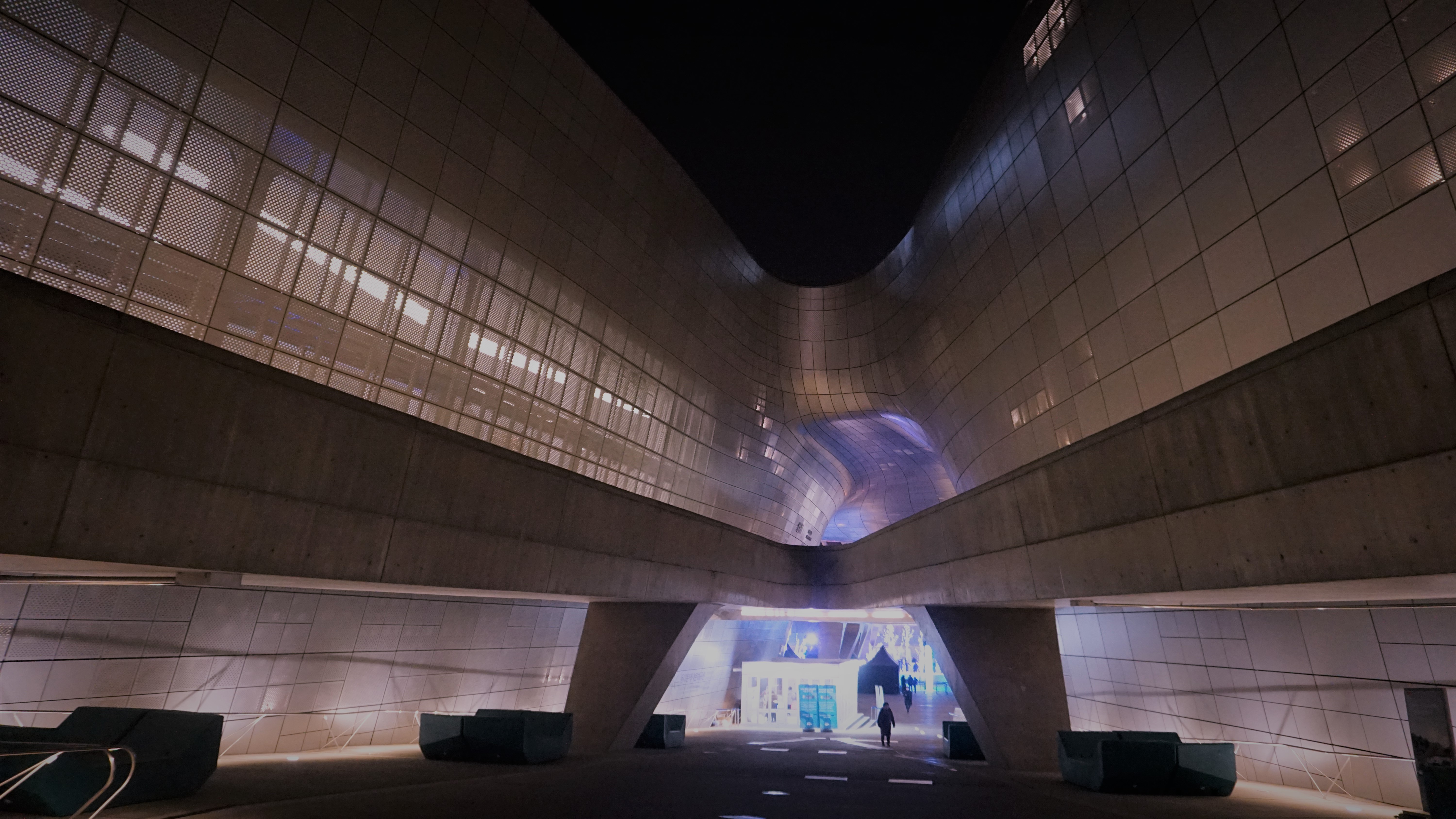 It’s weird that I’ve been to Dongdaemun Design Plaza twice, but have never gone inside. I really just wanted to see the LED roses installation, and maybe shop a little at their nearly 24-hour mall (I think the mall closes around 3 AM?). One of the upside of winter in Seoul is that there wasn’t a lot of tourists around. We were here on a Sunday night, and there were only a few couples milling around. Because my last trip was during peak season, my impression of Seoul was a bustling, crowded city. Walking around at night during winter was an entirely different experience. Yes, there still were a number of people roaming the streets, but the volume was not as high. 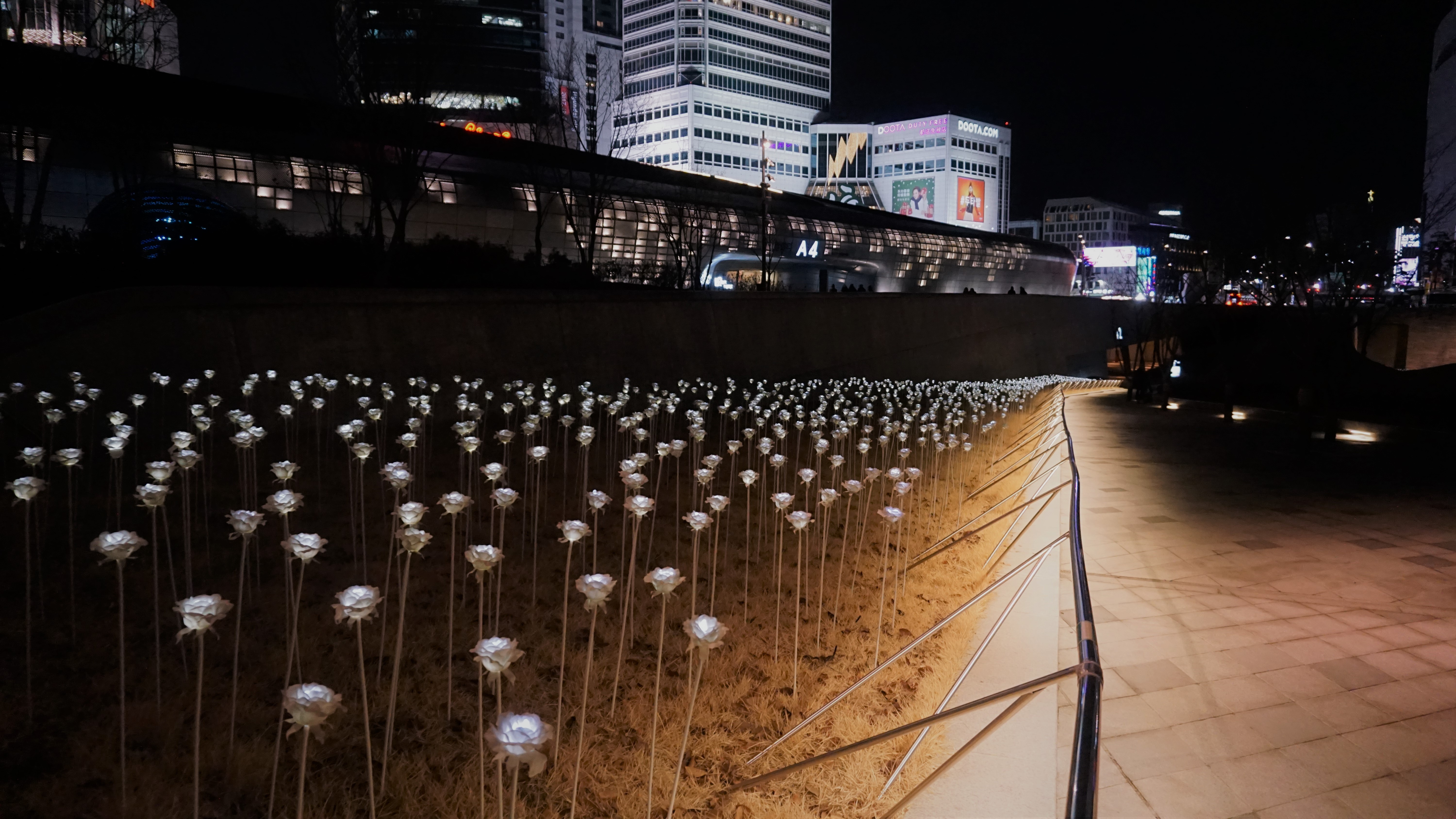 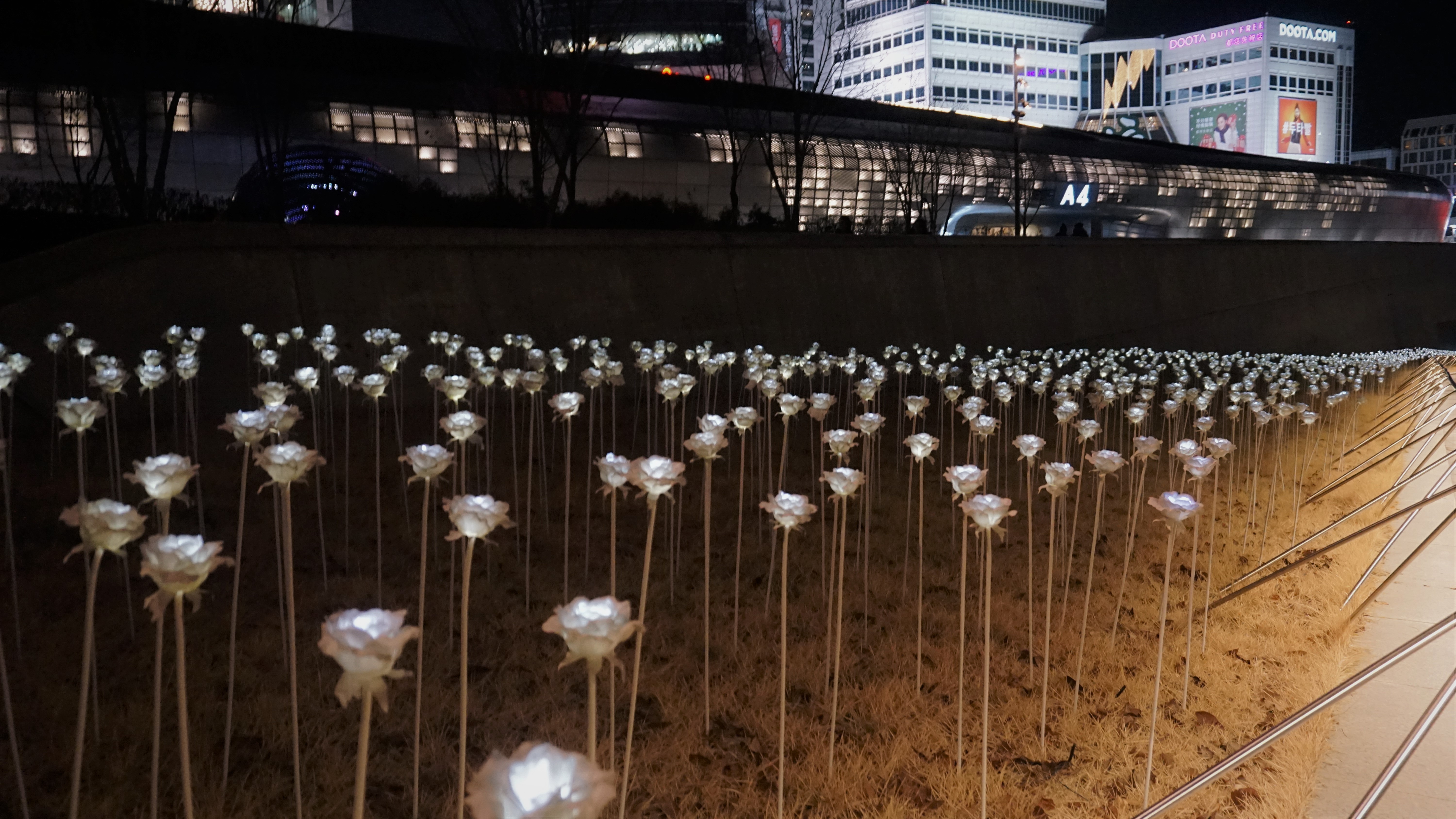 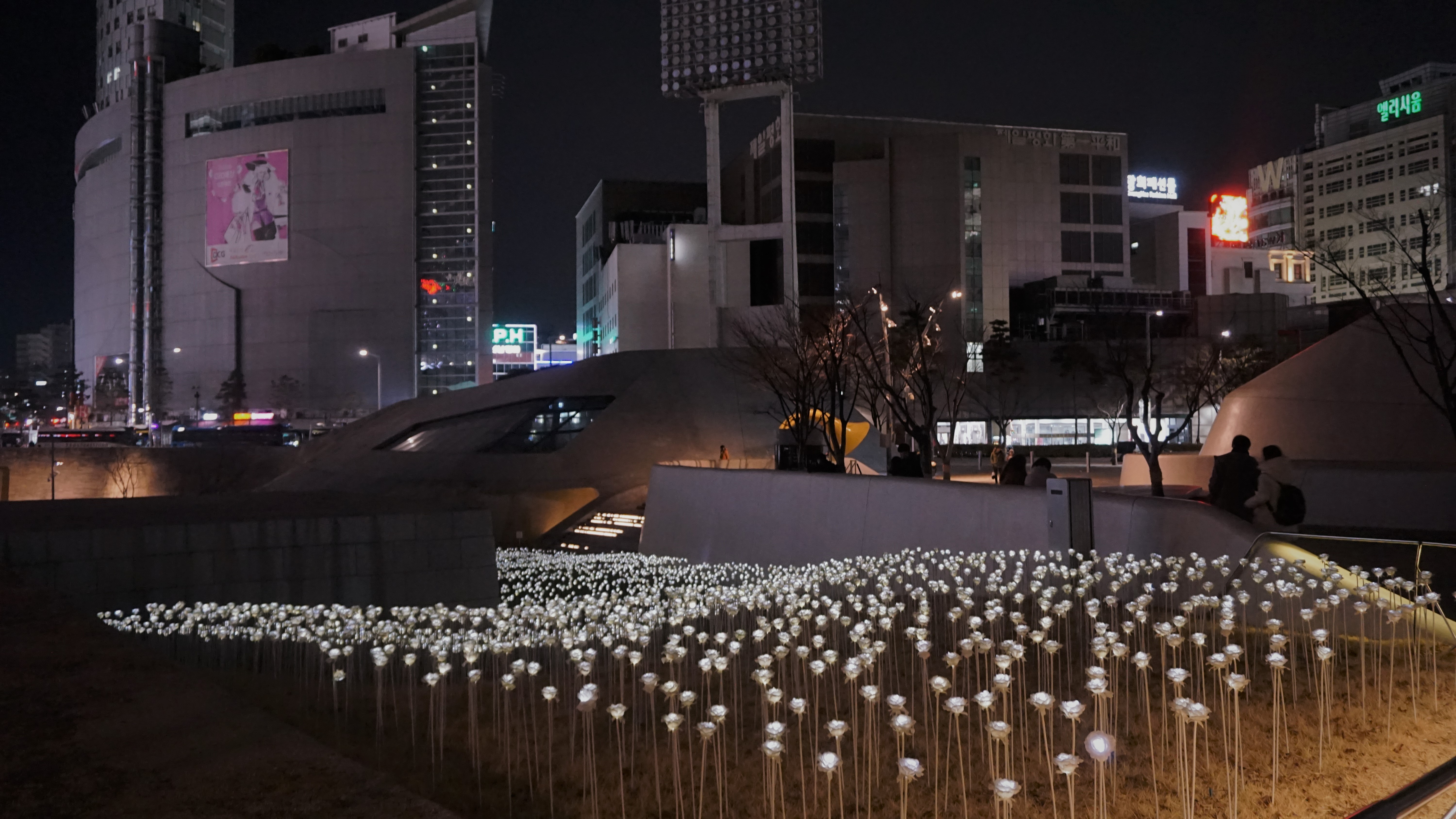 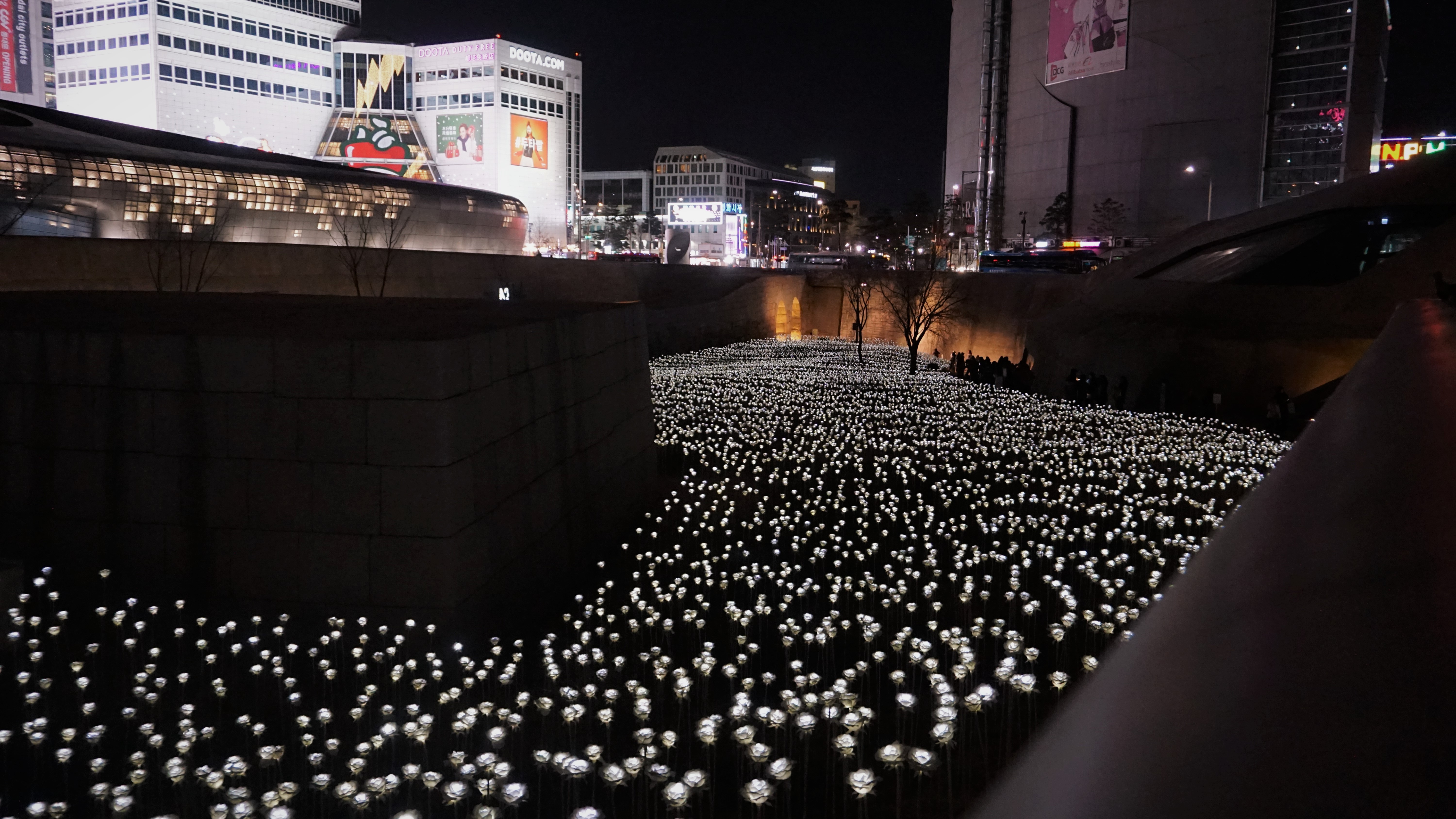 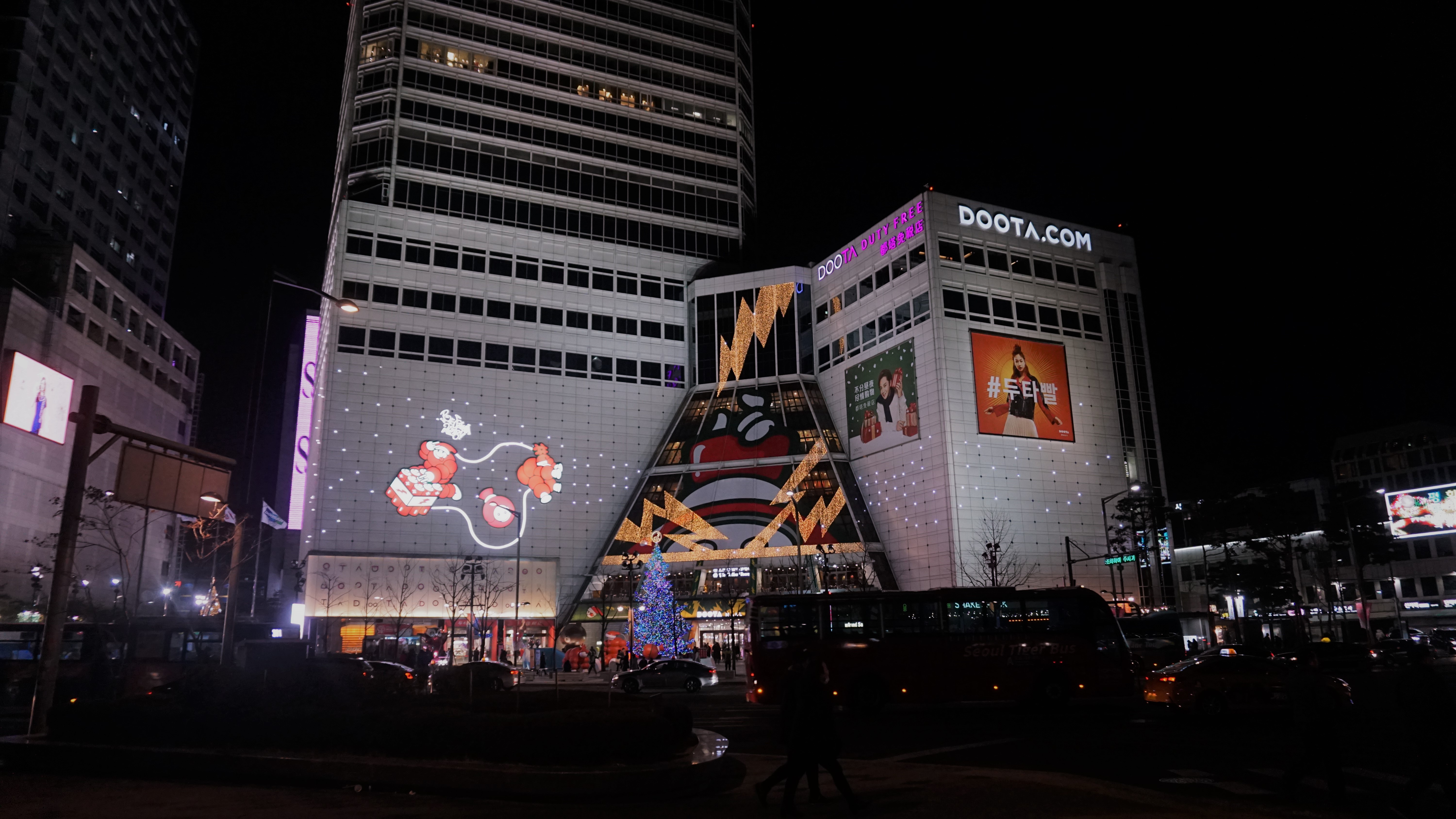 I went in a couple of stores to grab some essentials that we forgot to bring (I got so used to staying in hotels that I traveled without my toiletries lol), and also had our money exchanged inside one of the malls. Money changers in the city always have better rates than the airport (buying rate at the airport was 18, and at Dongdaemun was 20+). They only had stellar rates for some currencies that they’re promoting (New Taiwan Dollar included, which was lucky because I had some bills left over from my previous trip). To somehow salvage our botched first meal in Seoul, I had C try out the chicken skewers with cheese (he liked it), and a lot of street food from the tents around Dongdaemun (that we couldn’t take photos of as the temperature dropped to 0 and I was not about to take off my gloves). 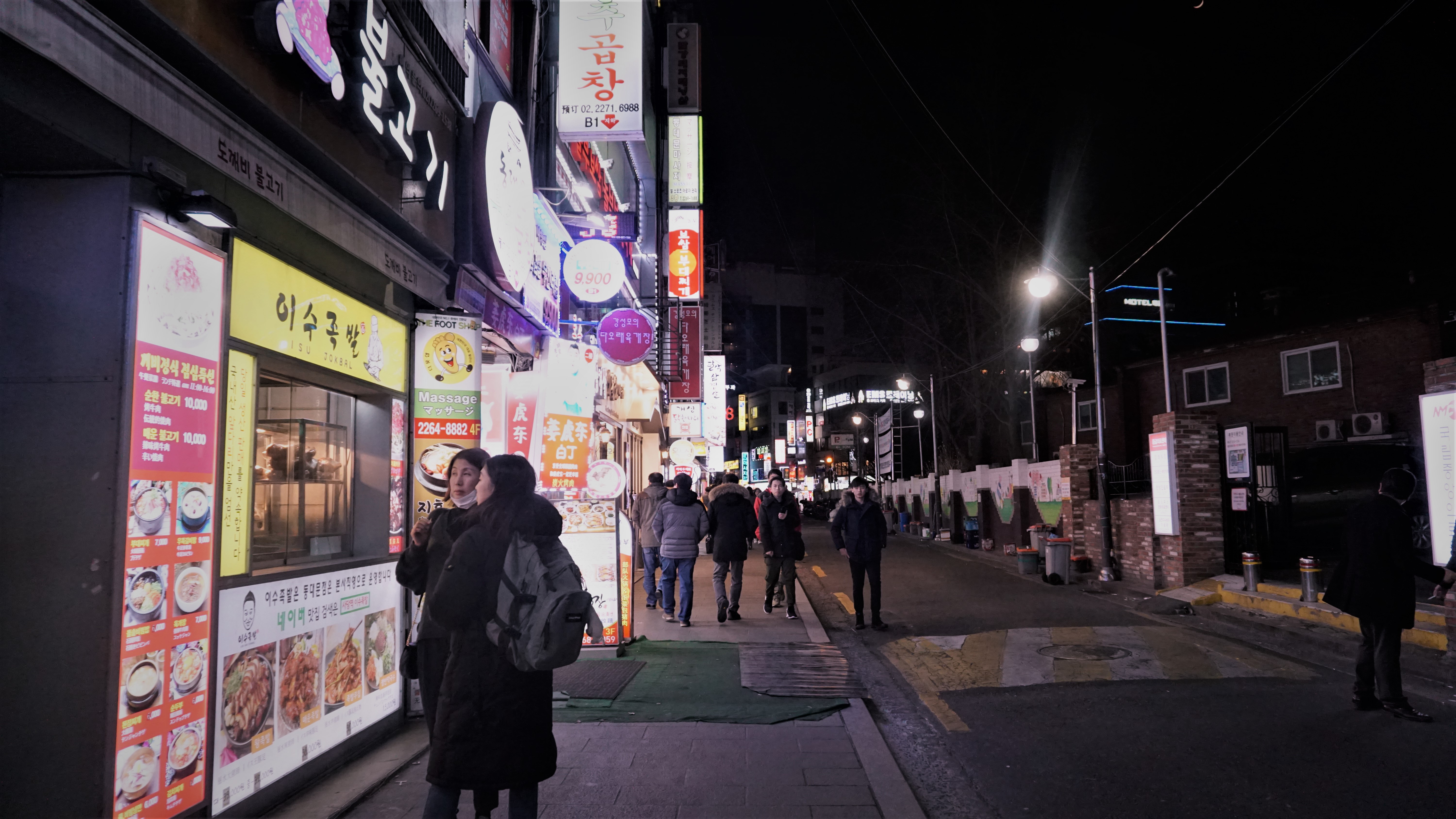 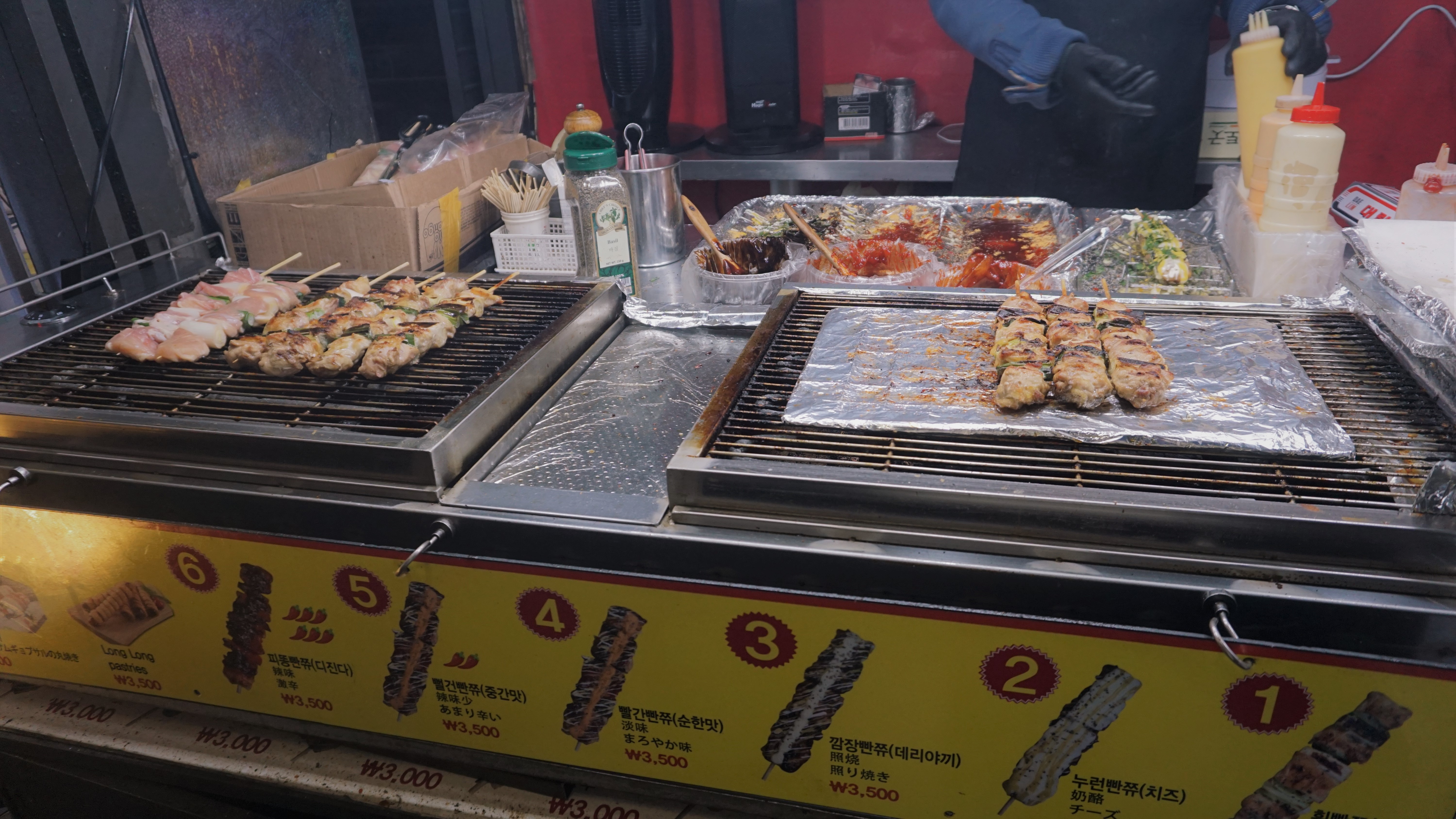 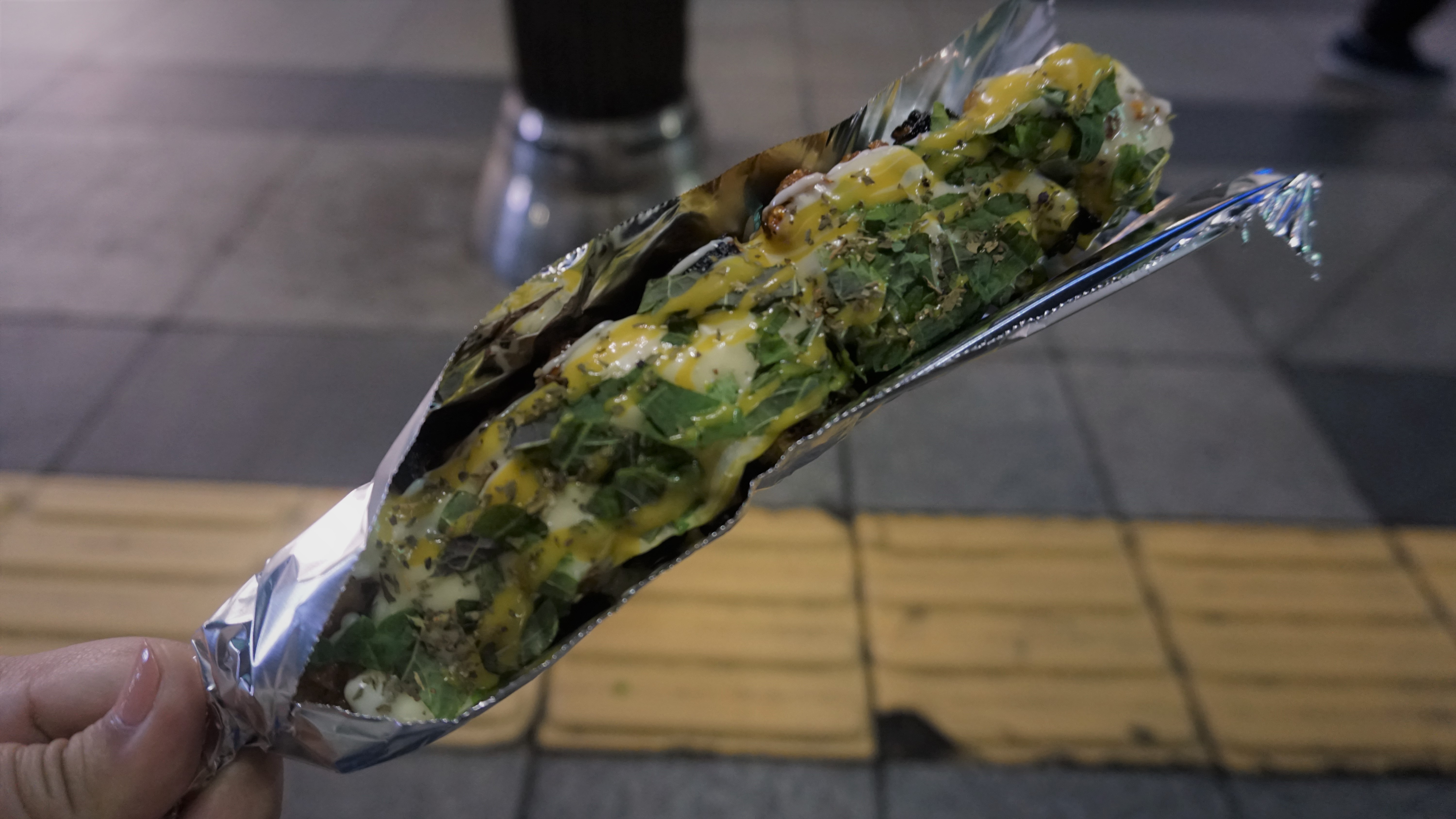 And that’s it for our first day in Seoul! We didn’t really do a lot because we were still tired from waking up early to catch our 7 AM flight, but the rest of our days were quite packed. I can’t wait to write about it! 🙂