This is going to be my last post until I get out of a one to two-month hiatus. I know I said I wasn’t really sure, but I work out things so much better when I give myself a timeline or a deadline of sorts, and that’s what I decided to do this time. I wouldn’t want to stop blogging again because I did that back in 2012 and only got back into it by 2014. I sometimes wish life would just be a series of fun staycations and hotel hopping but I would rather that staying in hotels do not become second nature to me and be the source of my anxiety. I know this anxiety is unreasonable, but that’s exactly it. Unreasonable. I get pumped when I find a new hotel to try out that is within my price range, which is also why I’m always on the lookout for newly opened hotels because they tend to have introductory prices and you know you’re sleeping in a brand new bed. When I came across Rizal Park Hotel, I booked it for my birthday weekend without hesitation.

The location is ideal if you want to visit the attractions within Rizal Park (such as the National Museum of Fine Arts, Planetarium, Manila Ocean Park, Museo Pambata, etc), or Rizal Park itself. I wouldn’t say walking around is the safest, because let’s face it, this area is not really known for its safety from pickpockets. The hotel itself is gated so you don’t really need to worry about this once you’re inside hotel grounds.

The hotel itself is beautiful. The building was finished by 1911 and was initially used by the Army Navy Club. This year, after being restored to its initial glory, it opened its doors as a luxury hotel. Do note that as of writing, a huge portion of the hotel is still being constructed. There may be more amenities available by the end of the year or the next. I think they are still working on the gym because as of now, it’s just a small room with a glass wall where you can see only a handful of gym equipment. Better than nothing, for the fitness buffs.

However, since it was new, the staff is still working on providing hotel guests a more streamlined experience and it’s okay since they’ve only been open for roughly 2-3 months. If you’re bringing a car and decide to head out, you will have to get your parking ticket validated every single time at the reception because you will need to give the slip at the exit every time you go out.

Ever since I experienced a mix up in reservations and was unwittingly got scammed at Vietnam, I make sure to send an email to the place where I’m staying at within a week before I check in. I didn’t like that it took them three days to respond to my email, which is a bit lengthy as I’ve never had to wait that long to get a response for a booking confirmation email. So if you’re planning to check in spontaneously, your best option would be to give them a call. The check in process also took a while because they only reserved one room for one night (we booked two rooms for two nights) even though I confirmed my reservation a few days before. I also requested on my initial booking to get rooms located on the same floor since I wanted to be able to hang out with the sibs, too. I think whoever was in charge in making room assignments had to rearrange it again since they only reserved one room for us. We eventually did get both rooms located on the third floor.

It rained on our first day – and the rest of the weekend – and it is something I have learned to expect over the years because it never fails to rain on my birthday. What was unfortunate was C going down to the reception (which I later found out was not to find food but to arrange for a cake to be delivered to our room) and on his way up, the elevator door opened to a mini waterfall display. Since all the elevators leaked/got flooded, we had to utilize the stairs for the rest of our stay. Thank goodness that our rooms are located on the third floor because if we were higher up, they’d never hear the end of me complaining. 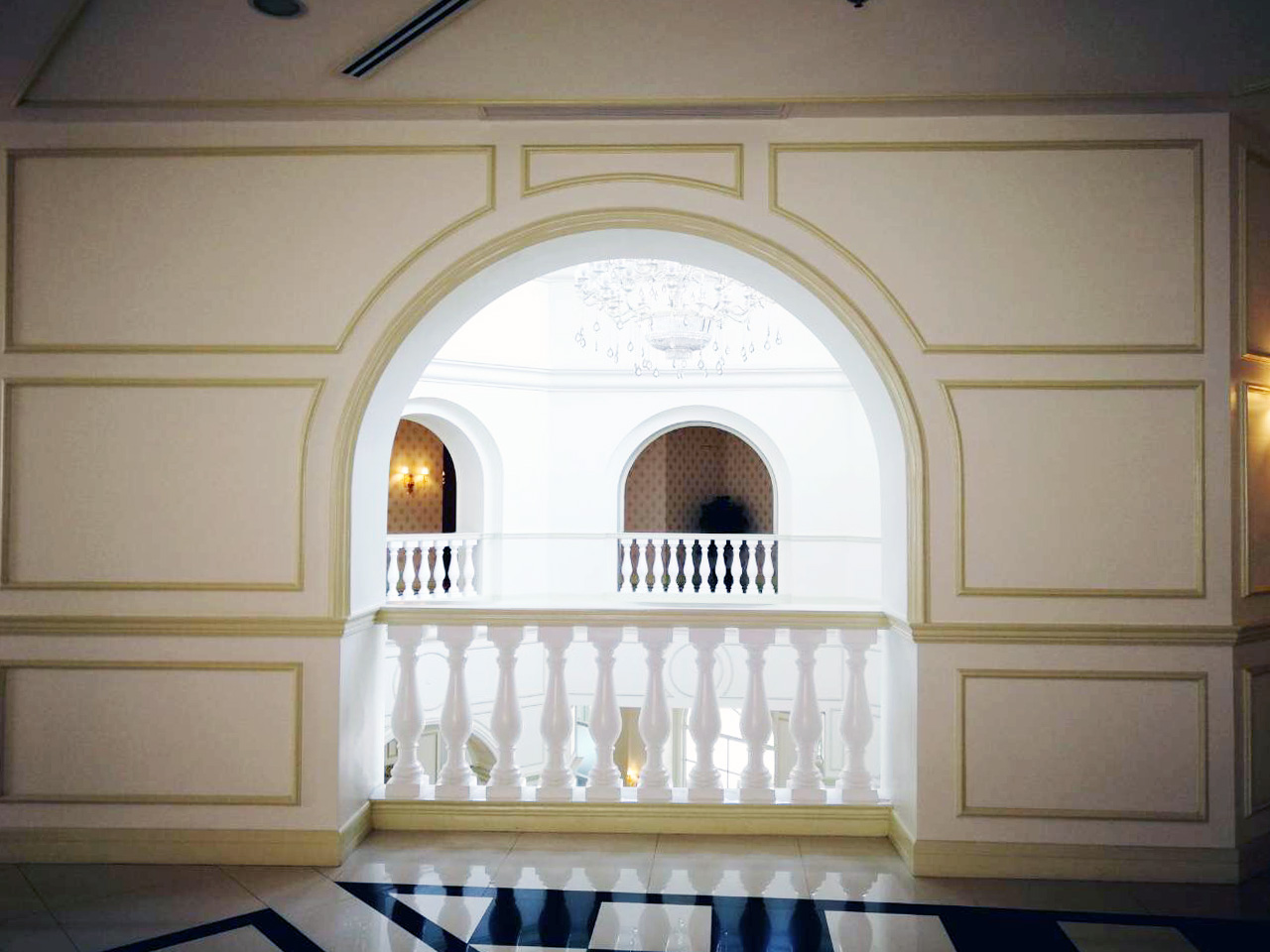 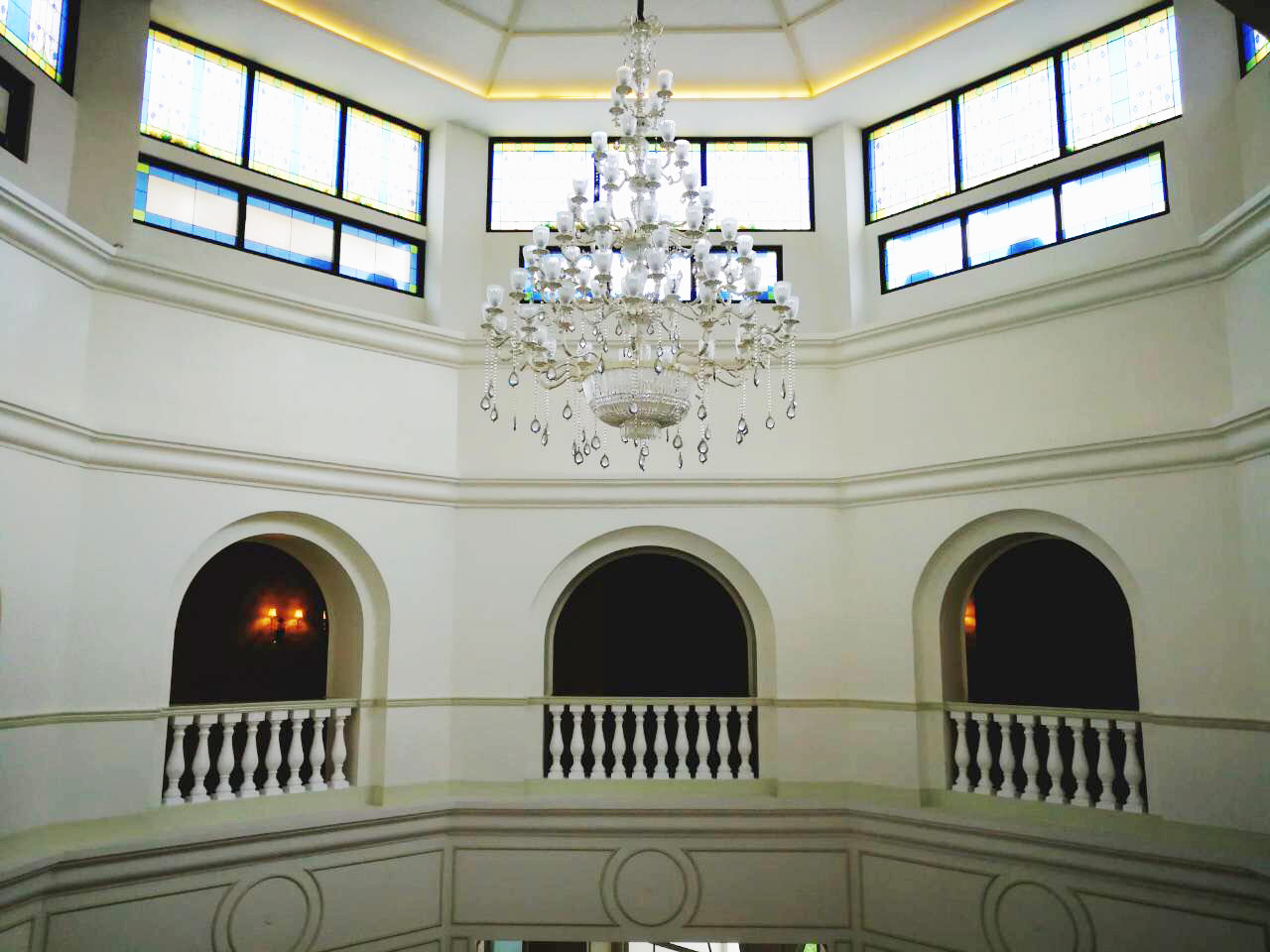 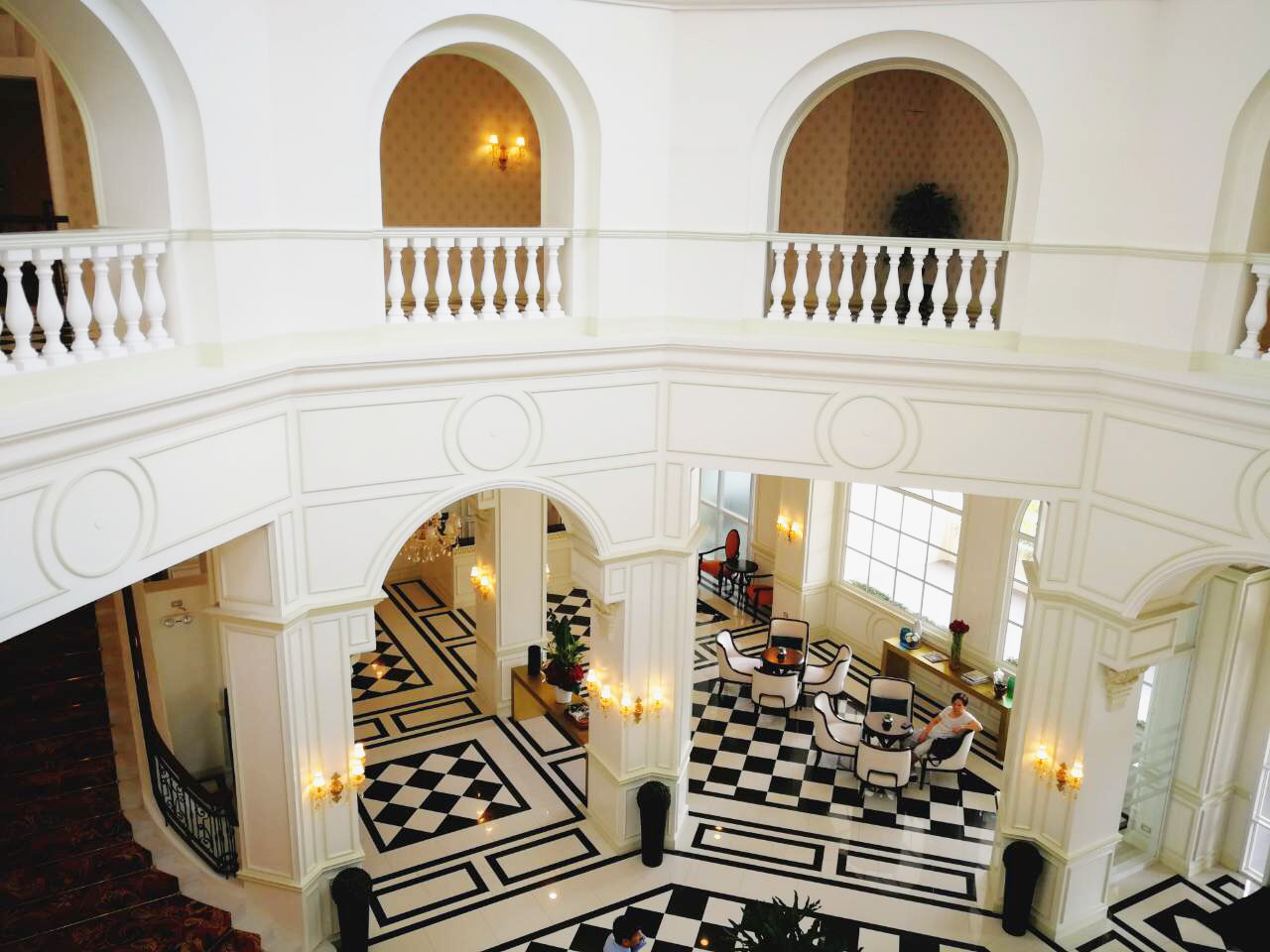 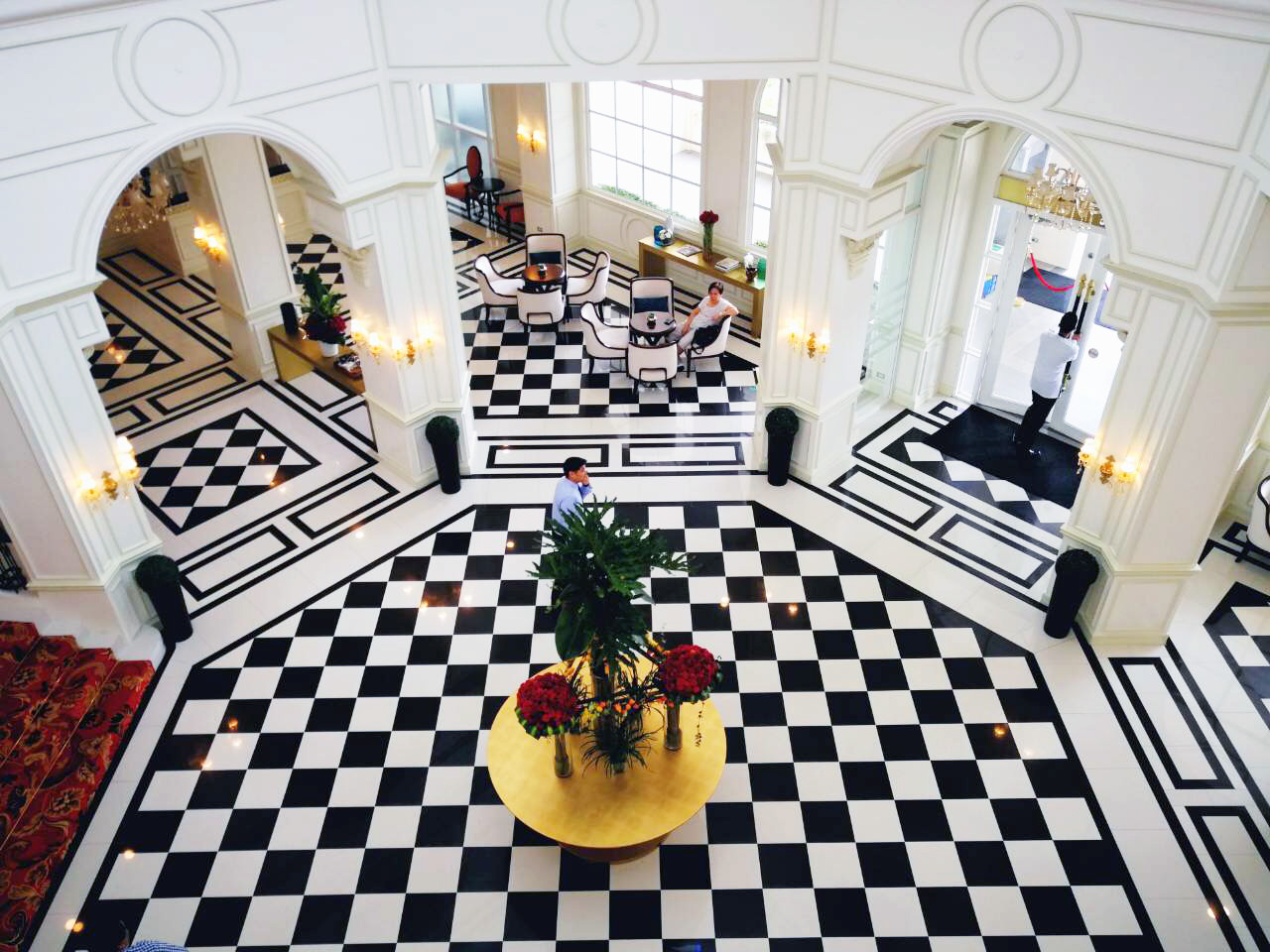 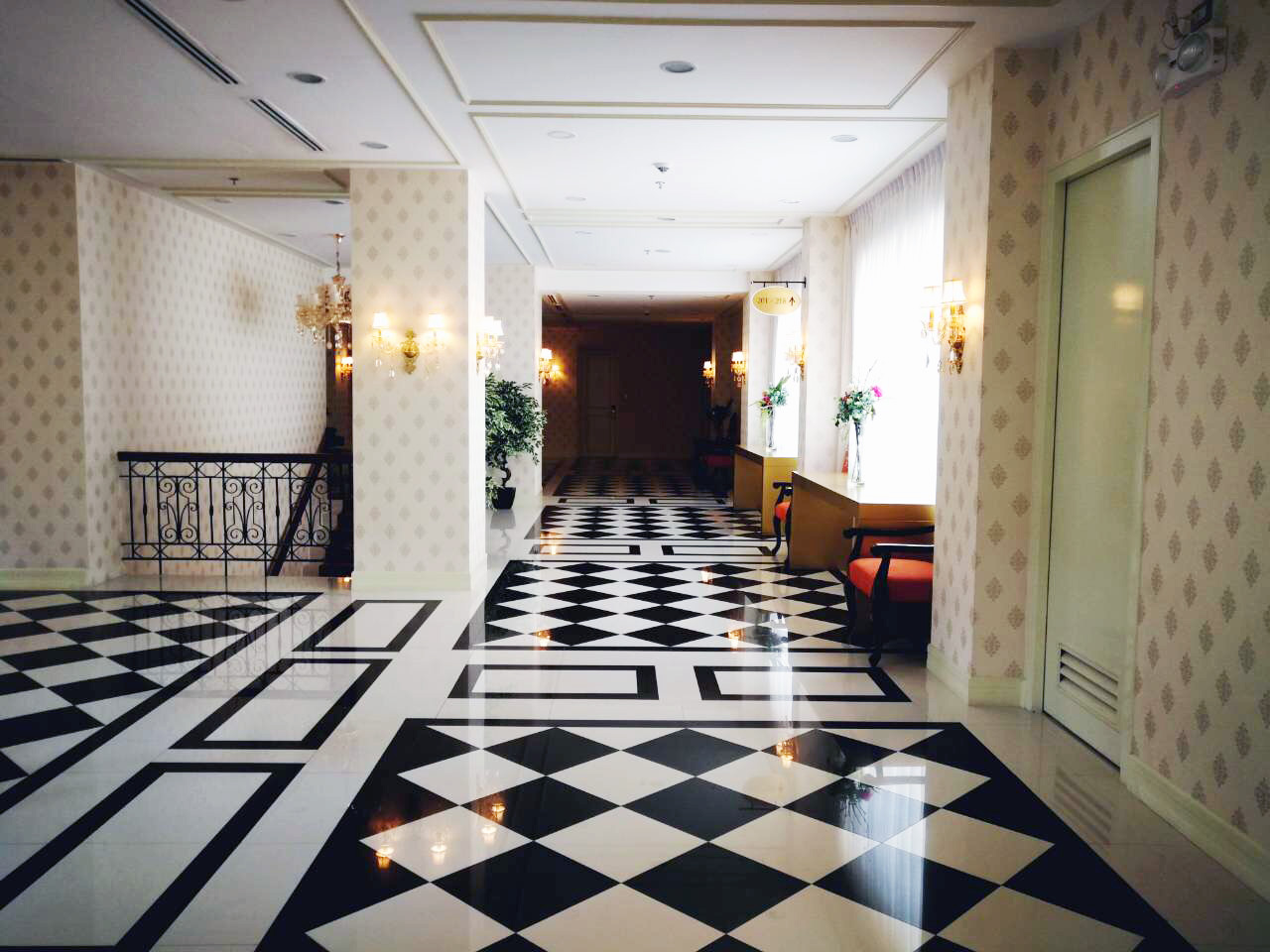 The rooms itself are great, not too spacious but the Deluxe Room had enough space for two people. I love the colorful tiles and the actual chandelier in the bedroom. The room’s neutral color palette was really relaxing, with a hint of luxury. And there’s a full body mirror – which I like because it’s hard to check your outfit without one. Haha! We did have a wifi problem since we couldn’t use the room/last name combo to get wifi access, so they gave us another way to connect to the wifi. I also didn’t see a safe in the room, which is something to keep in mind for guests who have valuables they want to leave in their room. The television’s channel guide is also a little off, but it’s not lacking with English channels for foreign visitors. If there’s one thing I like about local hotels in this country that I really can’t say for a lot of foreign hotels I’ve been to, is that Filipinos are westernized enough that we have a lot of English shows available. (There are also some Chinese and Korean channels, too, if I remember correctly.)

I like hotels with bidets in their toilets. Do you know how annoying it is to use toilet paper to wipe shit off your butthole? I don’t know if it’s just me but I never feel fully clean until I get to wash my ass. Haha! The bathroom had an abundance of towels for two guests, and they provide what I would consider complete toiletries.

Sleep quality was A+ in this bed. It was super comfortable that even if we set an alarm using the room’s alarm clock, the only thing we do once it wakes us up is turn it off so we could sleep again. The room’s air conditioning didn’t help either because it was cold no matter how much we turn it up. Haha!

As with most hotels, you can pick between getting a room with twin beds or a king bed. While C and I got the one with a king-sized bed, the sibs got one with separate beds. They had the same amenities we do although their room felt slightly bigger than ours.

As I always say whenever I write about hotels I have stayed in, the staff is a major part of the hotel experience. No matter how great the amenities are, the staff can make or break your stay, especially with staycations. Fortunately, the hotel staff is great. They are always eager to help and would accommodate what we considered ‘silly’ requests. I stayed for the long weekend for my birthday, and C went to the hotel’s buffet (and as of writing, their only) restaurant to inquire whether they sell their cakes whole. They don’t, but they eventually acquiesced and let him buy a whole cake from their buffet (he also told me how the restaurant staff let him pick the icing to use in writing the greeting) and delivered to our room even though they do not have room service yet. Whenever we’re carrying bags to and from the parking, if a staff sees us, they would immediately offer help to carry it (even if it wasn’t heavy). 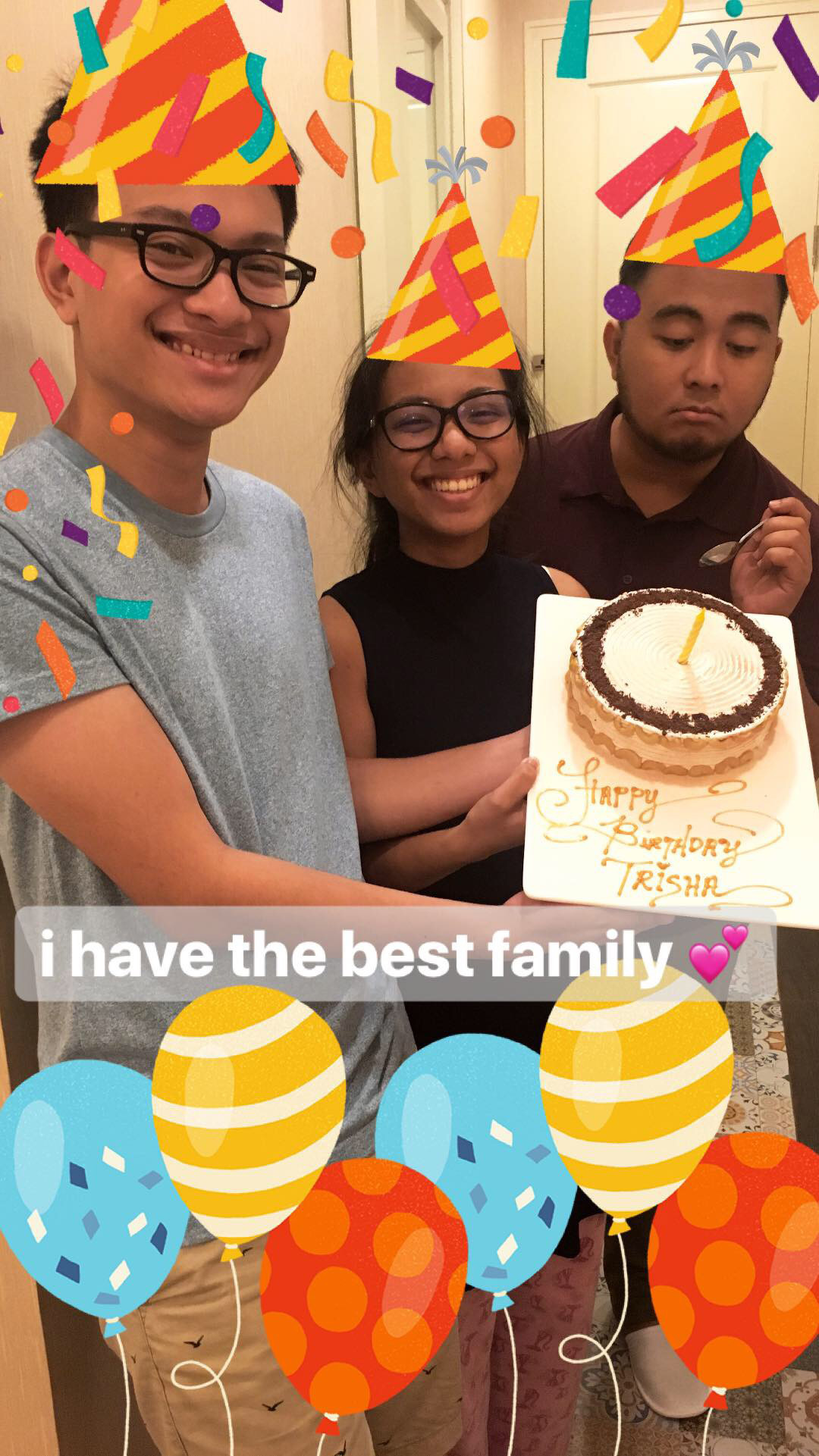 Our stay came with complimentary buffet breakfast that runs from 6 to 10 in the morning. The buffet breakfast offers different breakfast choices from Filipino, to Japanese, Chinese, and Western breakfast. The choices for each is not as overwhelming as most international buffets, and there were some hits and missed with the available dishes. I can’t go into too much detail though because we didn’t really get to see the entirety of the spread whenever we had our breakfast. I believe that this was the first long weekend so the volume of guests was higher than usual, and some of the items in the buffet breakfast ran out/took a really long time to be refilled even though it’s not even 9 AM yet. I think the staff at the restaurant also got overwhelmed because we had to ask for coffee repeatedly until we got it.

The restaurant has a door connected to the hotel’s courtyard where guests can smoke, hang out or drink al fresco.

Checking out also took a while since a lot of the guests were checking out at the same time. Also an additional note, I’m not sure if it’s the hotel or the bank, but the cancellation of deposit via credit card also took a while. I’m anal about any sort of credit card charges so I always check my credit card account to make sure cancellations push through and the cancellation still didn’t reflect a full day after checking out. My experience with other hotels is it is canceled within the hour after check out..? I’m under the impression that they’re still working on managing the hotel with a large volume of guests.

Overall, I would definitely stay in the hotel again. There is a great potential for a luxury hotel with the available amenities, and the service the staff provides. They gave me a 50% off discount coupon which I plan on using in a few months to see the hotel amenities that are still being constructed and see if the experience improves once they’ve had more time to operate. 🙂

What’s your favorite luxury or boutique hotel in the Philippines? Let me know in the comments below because I enjoy staying in nice hotels! 🙂