While I like to head out and explore as a birthday treat to myself, C is exactly the opposite. The past couple of years has been a hectic time for our lives. Days where we get to do absolutely nothing but lounge around in bed, are far and few between. Through the years, whenever I try to plan something for his birthday, I would be met with a statement of him wanting to ‘do nothing’. Talk about being vague because ‘nothing’ has never been my forte. So for this year’s birthday, I went with finding a five-star hotel that was a short drive from where we live but never frequent often, to book a room for his birthday weekend. Since he is also a watch aficionado (I swear if we weren’t saving up for the future, he’d probably have an expensive timepiece on his wrist by now), I bought him a watch that he has been eyeing for months and got it customized to his taste. There’s a thing his face does whenever he’s overwhelmingly happy – I know it sounds cheesy and cliche – where it just lights up. The moment he saw the bag that contained his gift, he already knew what it was and that childish giddiness came bursting out. It was one of those moments where I just wish I can scoop it all up in a bottle and keep it in a glass case so that I’ll never forget it. He even exclaimed once the weekend was over that it was the best birthday present ever and I beat my own record of the best birthday gift from 2011 (which was a chicken leg plushie).

Whenever I search for hotels to stay in while traveling, I take into account a couple of things: if it fits my budget, the location (how accessible it is from public transportation), the capacity (if you haven’t noticed, I rarely stay in hotels that have more than 100 rooms because more guests meant slower check ins and busier breakfasts), the amenities, and of course, the aesthetics (I do not like staying in hotels that look like an average room). If I used the same qualifications in booking The Manila Hotel, it would only pass the amenities and room aesthetics. The location is not quite ideal although they do have a shuttle, and they have 500+ rooms which made finding a table for the buffet breakfast on a Sunday morning, quite a chore for us and the restaurant’s hostess. This is the downside of being spoiled from our previous hotel stays – we get picky!

The Manila Hotel is a five-star hotel that’s been open since 1912. I, unfortunately, have never had any opportunity to step foot inside the hotel until this year. Upon arriving, I was a bit flabbergasted how it could have been touted as one of the best hotels in Manila as the building outside looked dated.. and frankly, does not call out to me. Getting inside though was a totally different story. The high ceiling, gigantic chandeliers, and, marble floor, all screamed opulence. However, the volume of the guests that were checking in before us (one of the reasons why I avoid hotels with massive capacity and major hotel chains) when we came had us waiting for 20+ minutes for our turn. While there were a lot of staff positioned in the reception, they were outnumbered by people inquiring, checking out, scheduling their shuttles, and whatnot. It was a good spot for people watching though as there were ongoing photoshoots everywhere, from debutantes to weddings. As well as the staff in traditional Filipinianas milling around, helping hotel visitors. 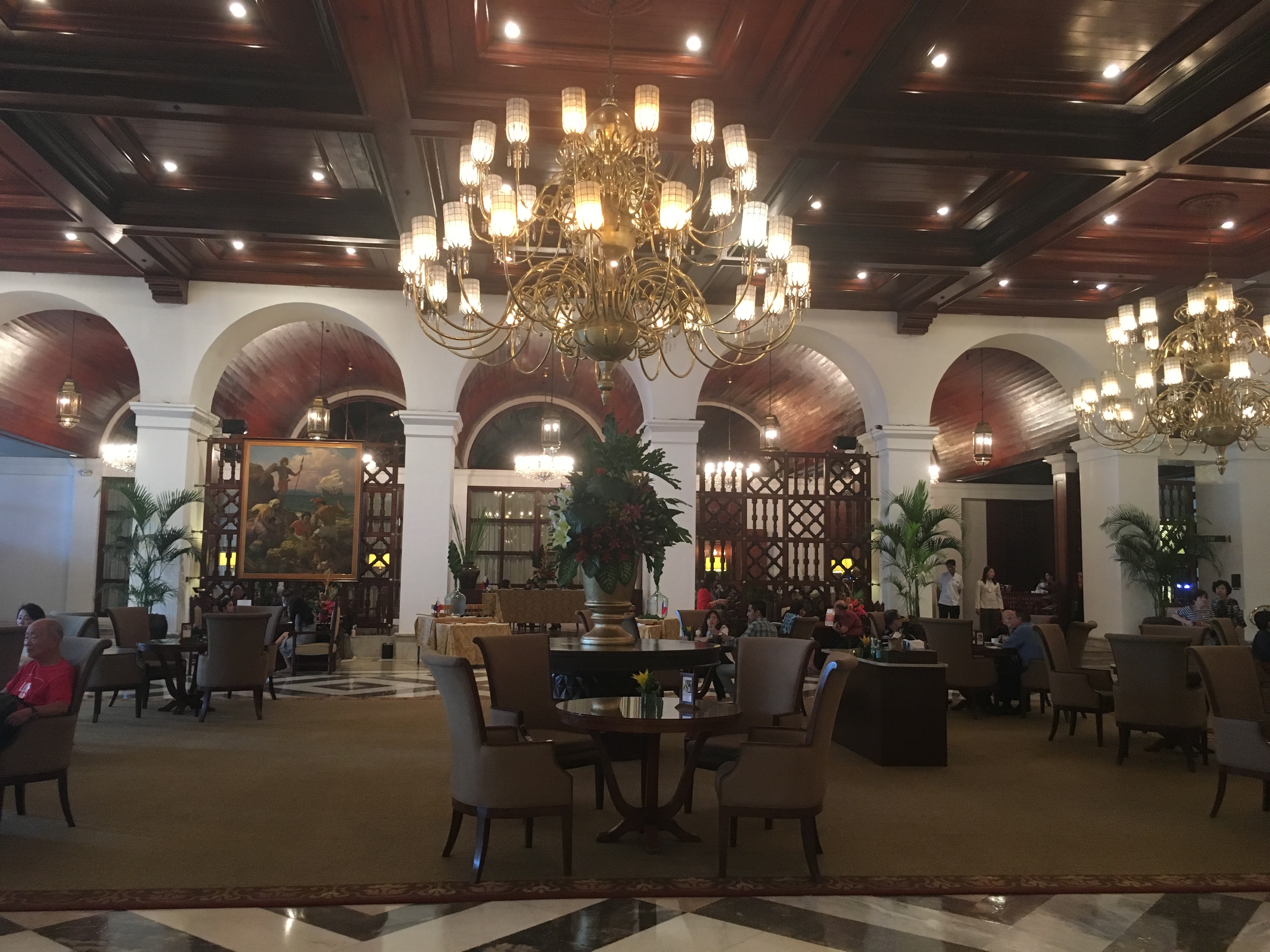 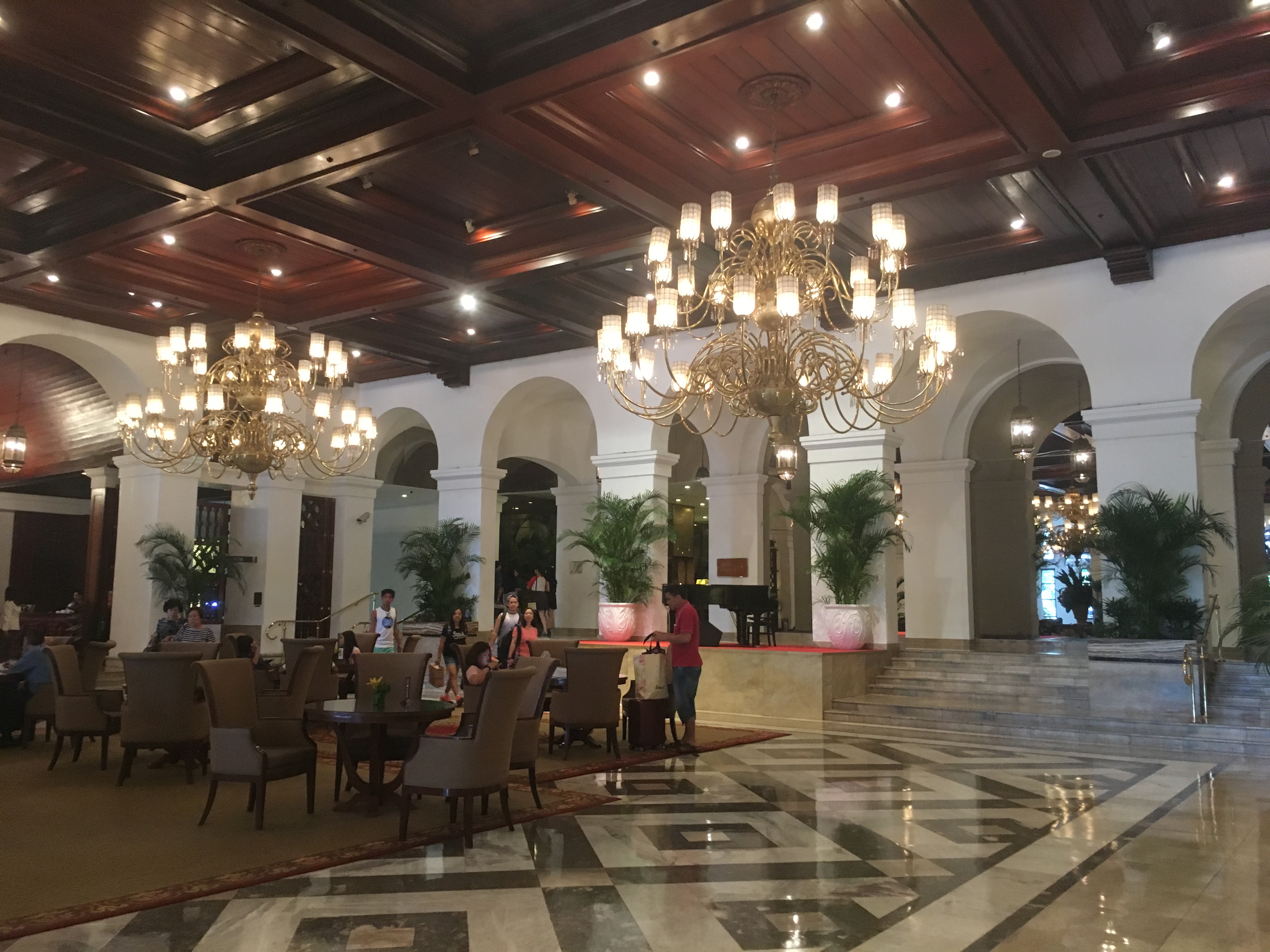 There was a hint of musky carpet smell as we walked through the hallways of the fourth floor to find our room, but nothing too overpowering (my sense of smell picks up quickly). When we found our room, we were greeted by elegant colonial period Filipino aesthetics. It reminded me of those old Filipino houses that have been built during the Spanish colonial period. One of the more prominent architectural materials during that time is dark wood (I think from Molave and Narra but I’m just picking random local tree names at the top of my head), which is pretty obvious with how the whole room was designed. Capiz shells were also used to adorn the mirrors in the room, as well as to frame the wall behind the bed. When I opened the cabinet, it only had one robe in it which was odd given that the room was for at least two people. They did have a lot of closet space and hangers for those who are planning to stay longer. 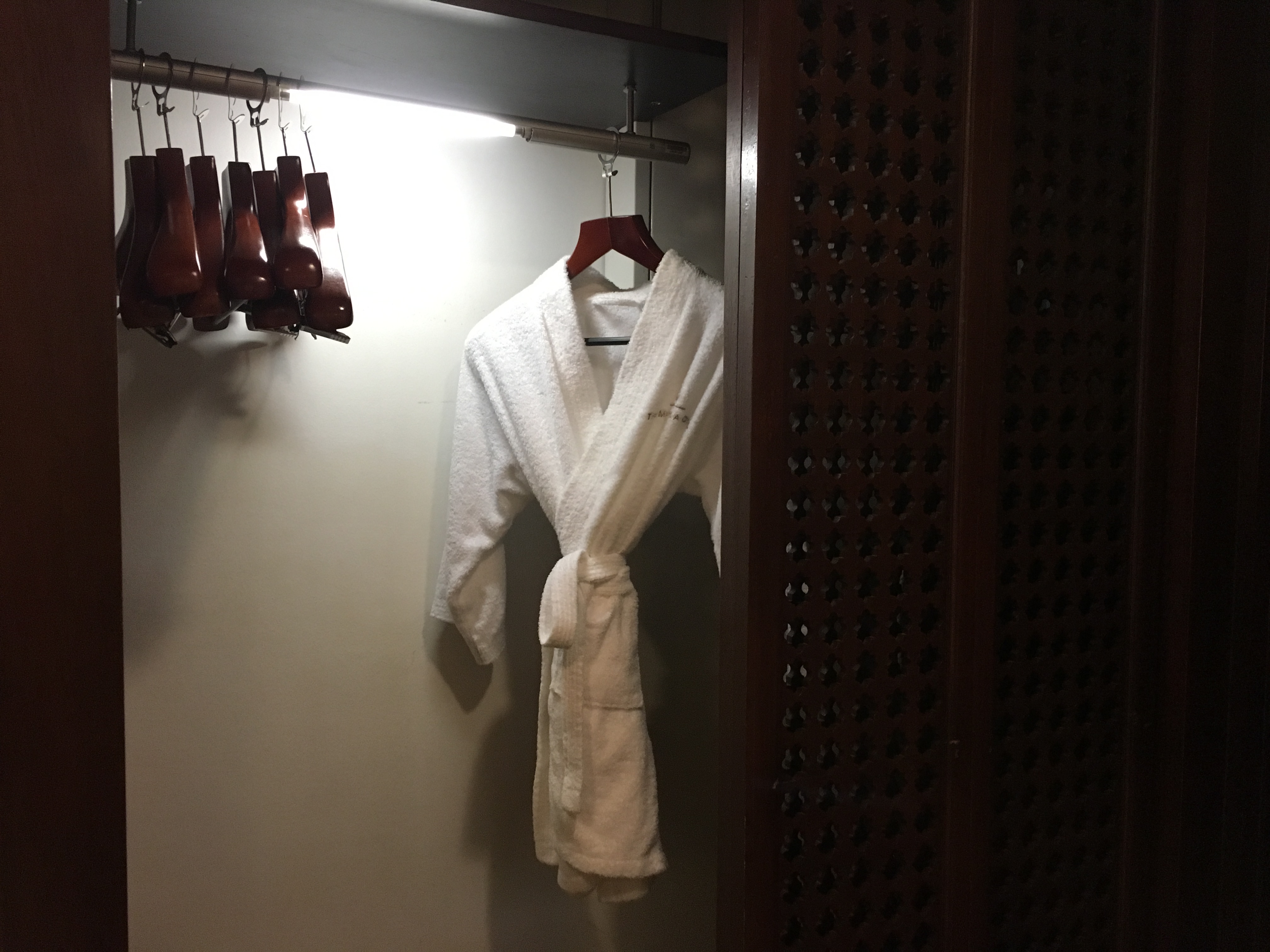 Fortunately, the marble bathroom has been renovated to reflect the modern times. It had both a waterfall shower, a handheld one, as well as heating. The toilet also had a bidet which is something C and I find important in a toilet (lol). When I first used the toilet, I got curious why there was a remote placed near it. As it turns out, the remote is a waterproof one designed for the waterproof LED television placed beside the bath tub. Shitting does not have to be boring because you can scroll through different channels while on number two. You can also utilize the television while on the tub. Cool, right? 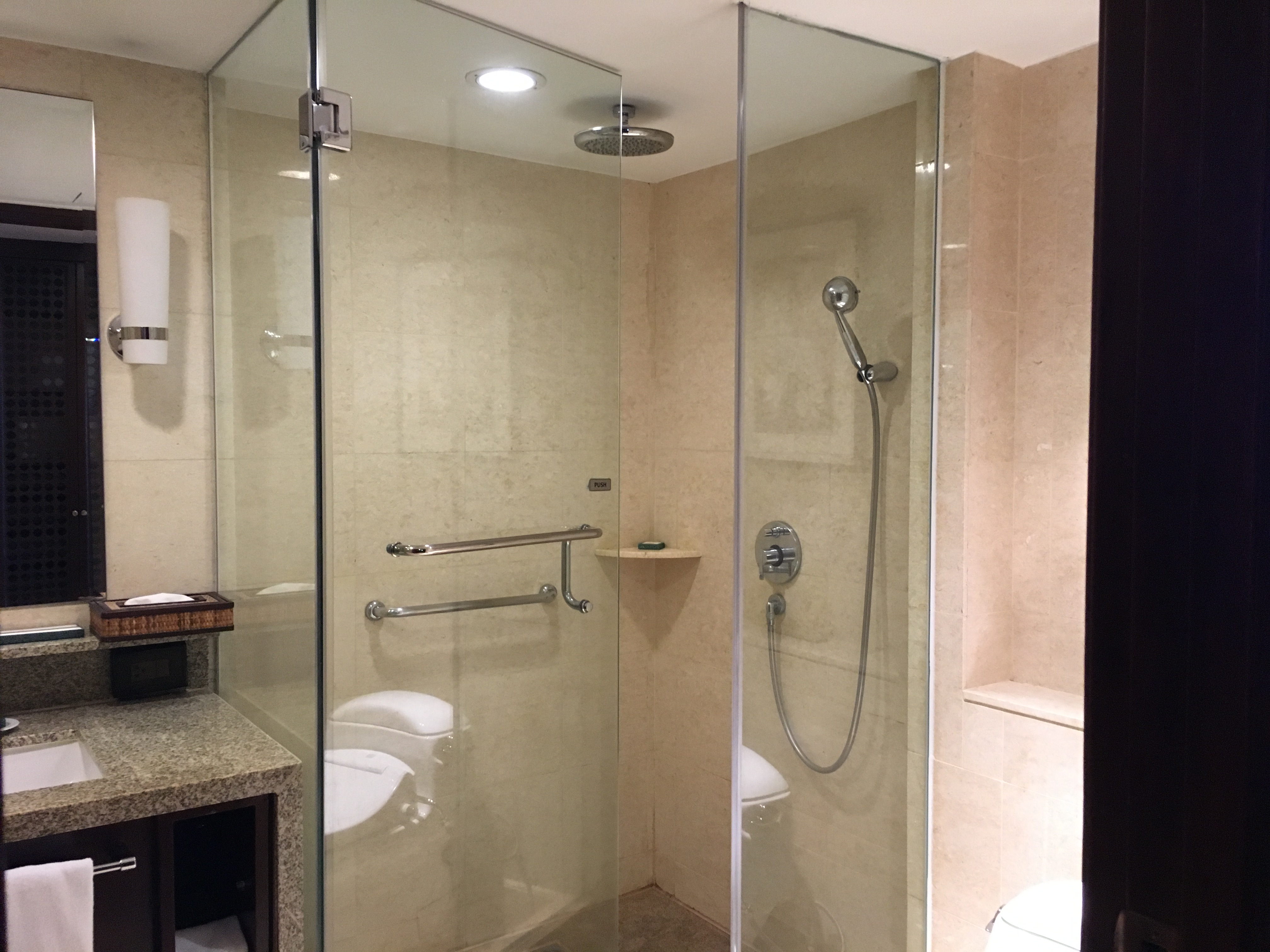 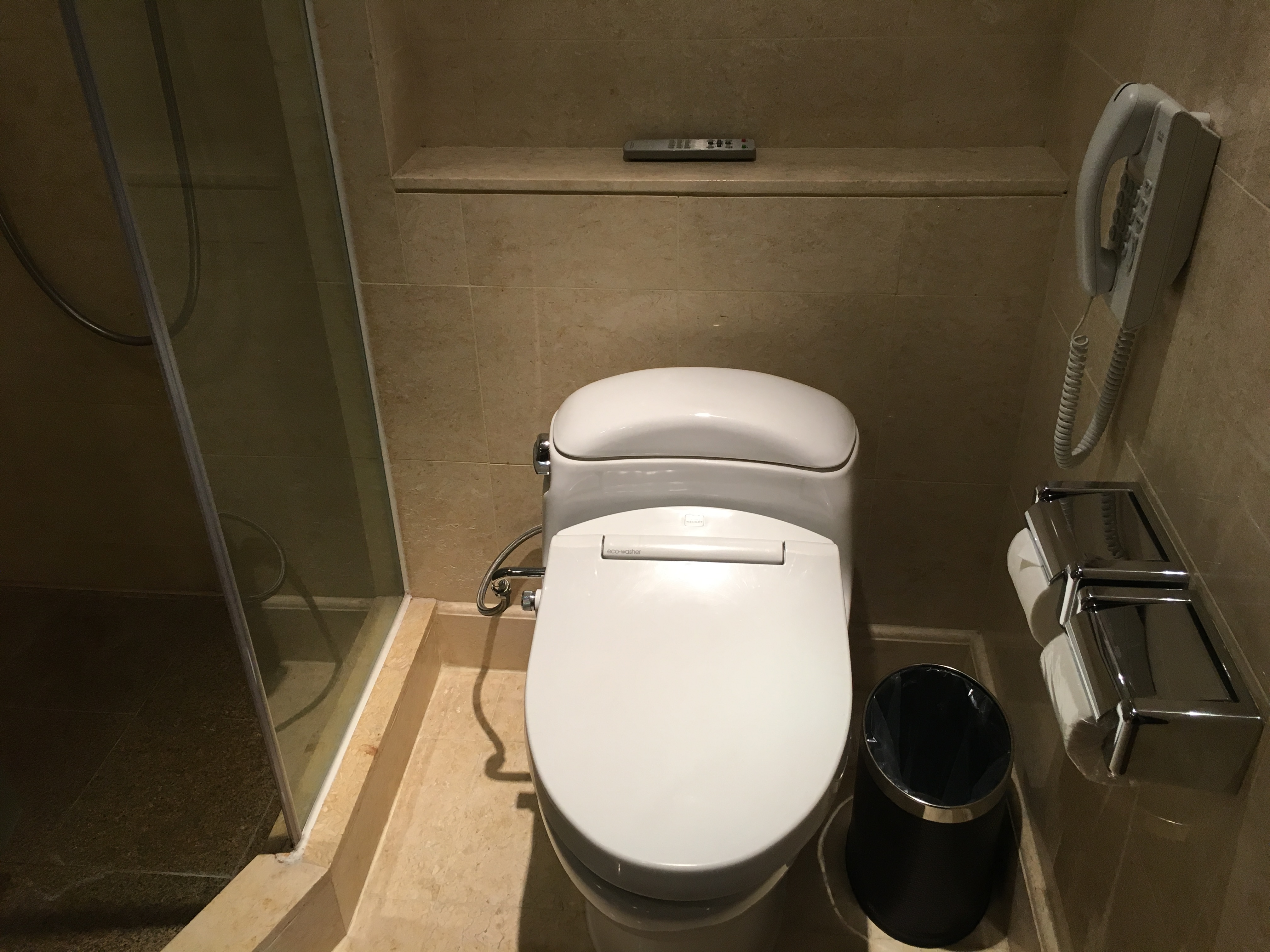 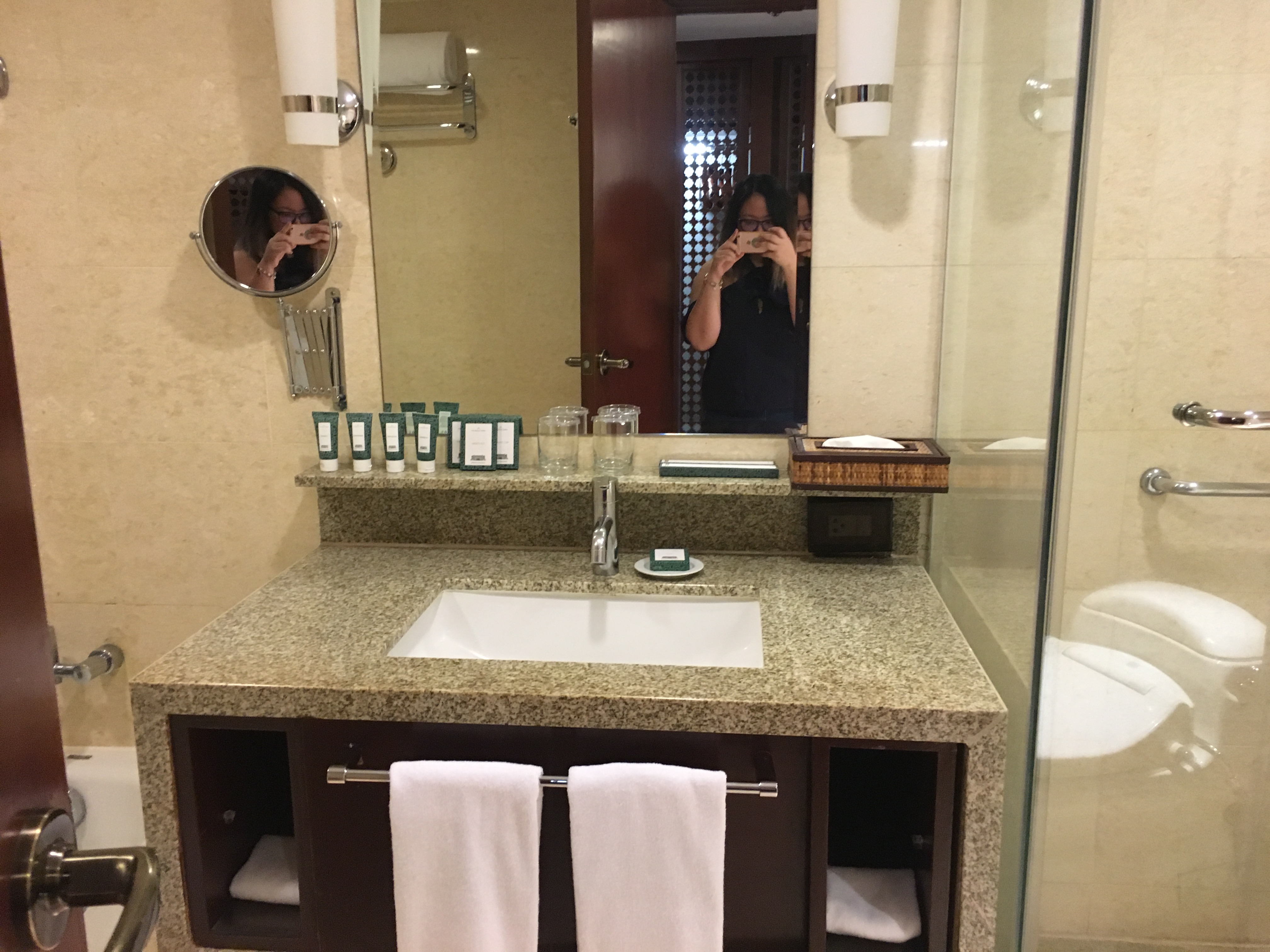 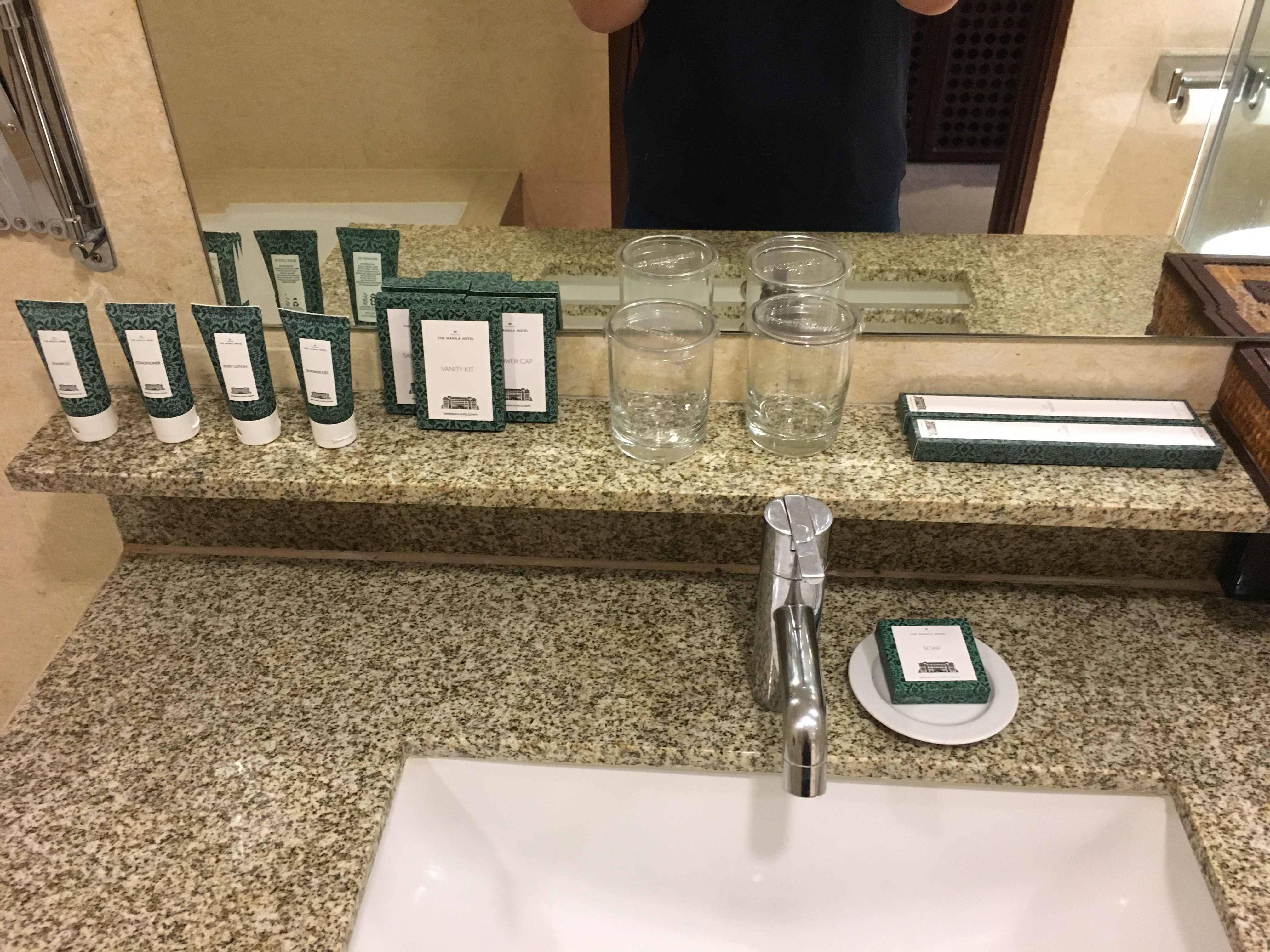 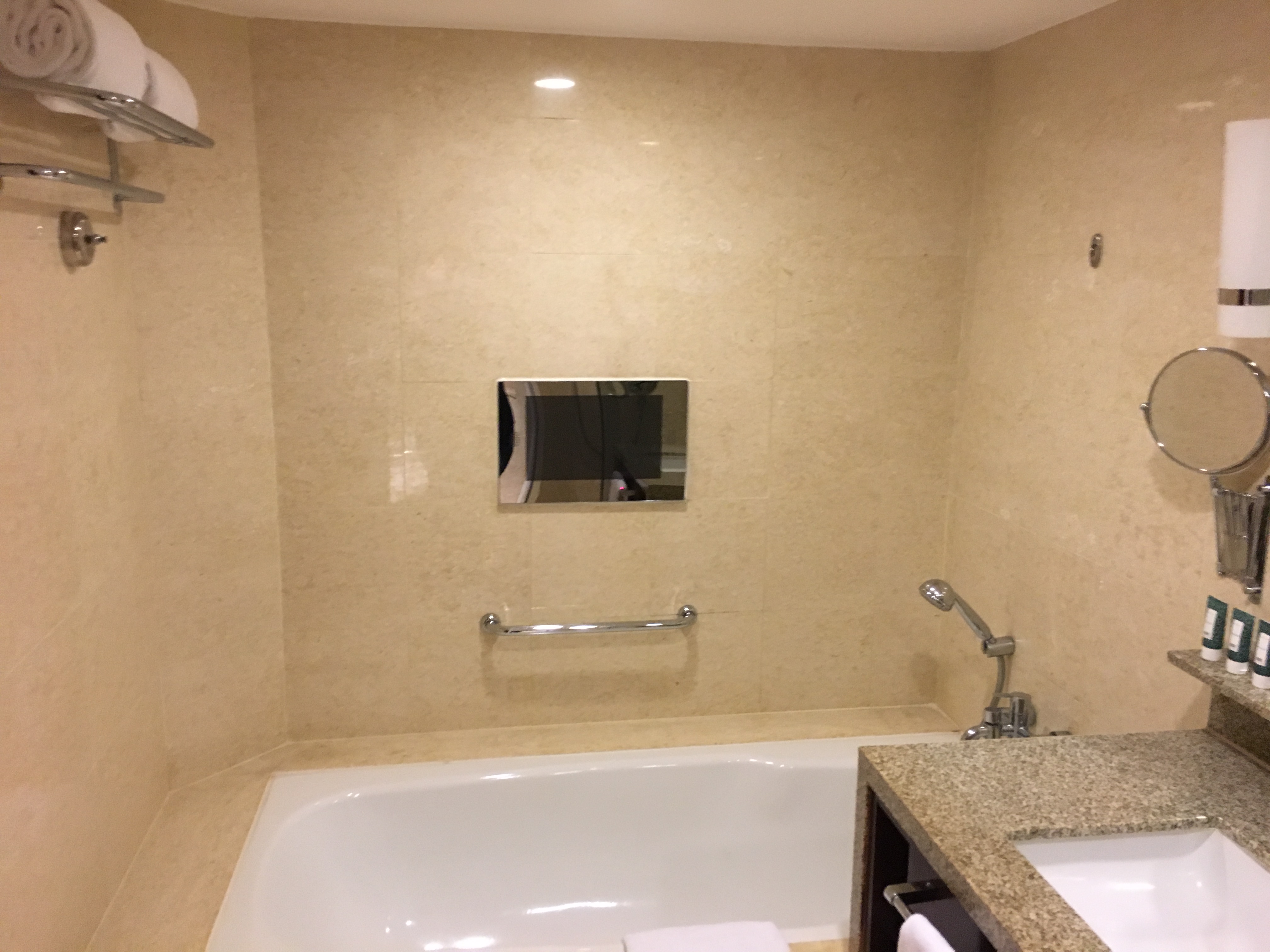 You guys know me and know about my affinity for bath tubs. I don’t live in a home with one, so I tend to compensate by booking rooms that will allow me to splurge on LUSH bath bombs. Any tub with a faucet that fills water quickly and has enough leg space for it to not be cramped is A+ in my book. The tub we had in our room ticks all the right boxes but if I had to nitpick, the placement of the faucet was a little unfortunate because, in the process of filling the tub, the counter’s corner and my ribs kept coming in contact. Totally my fault, but it got annoying. Haha! 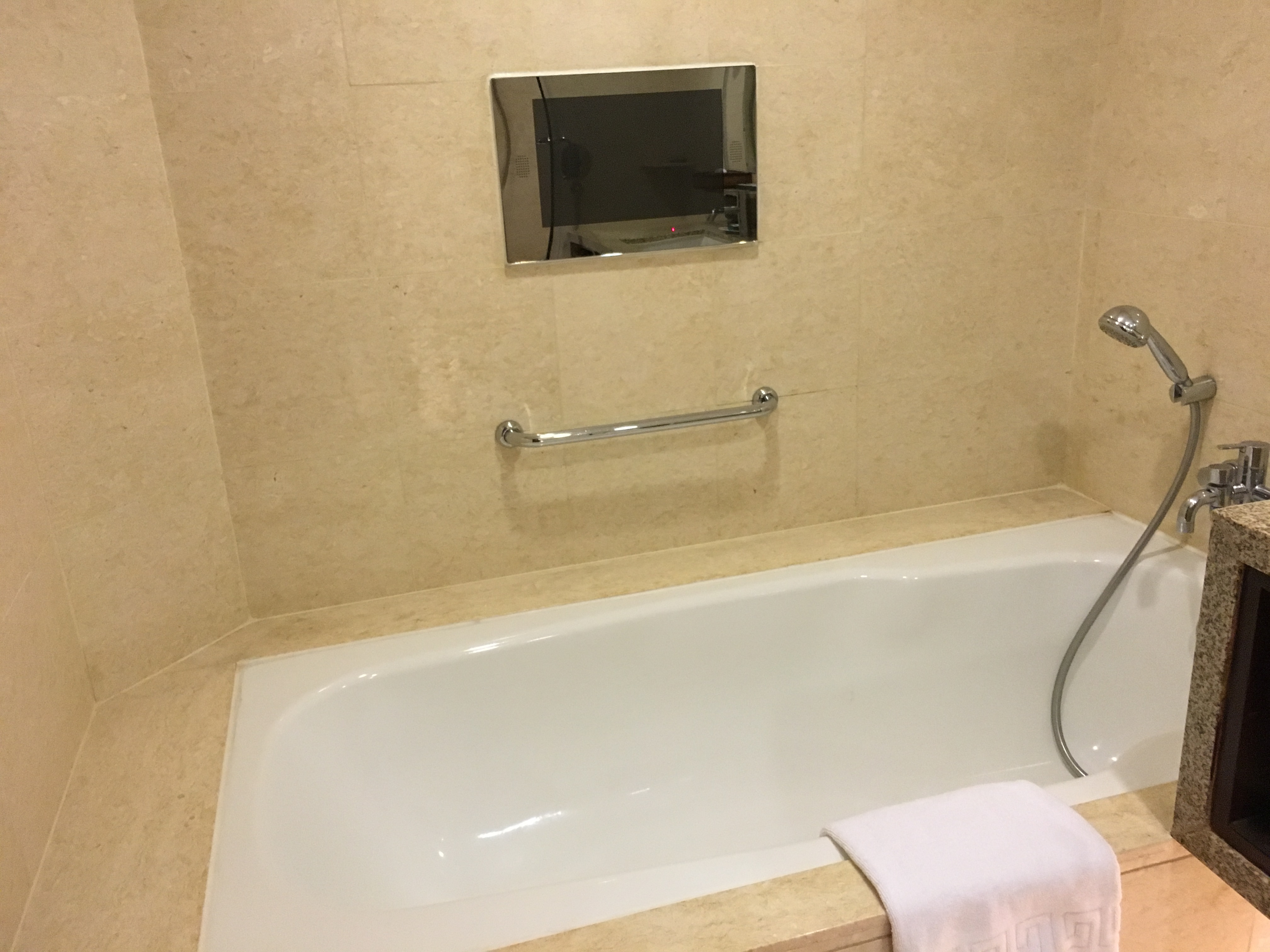 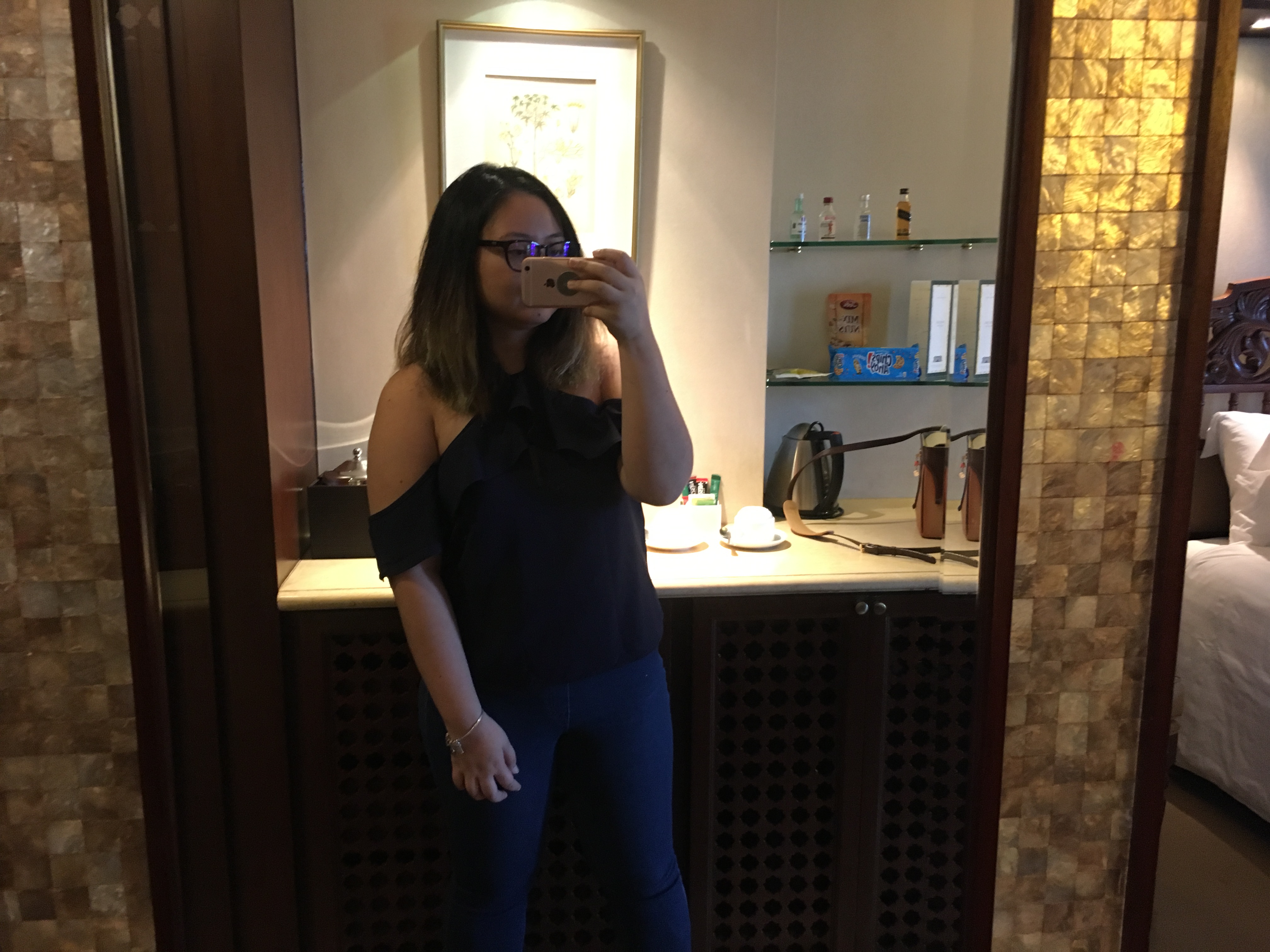 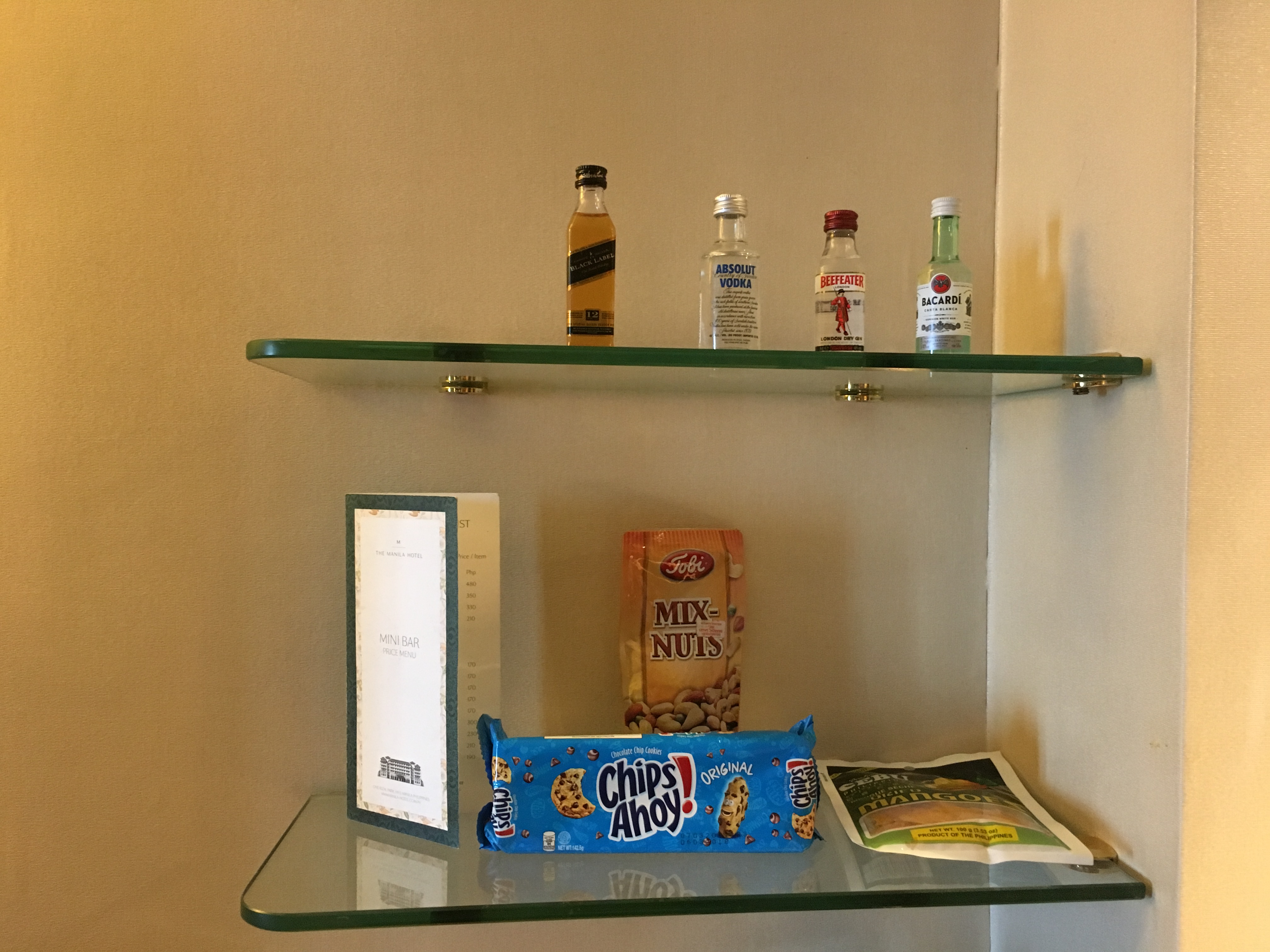 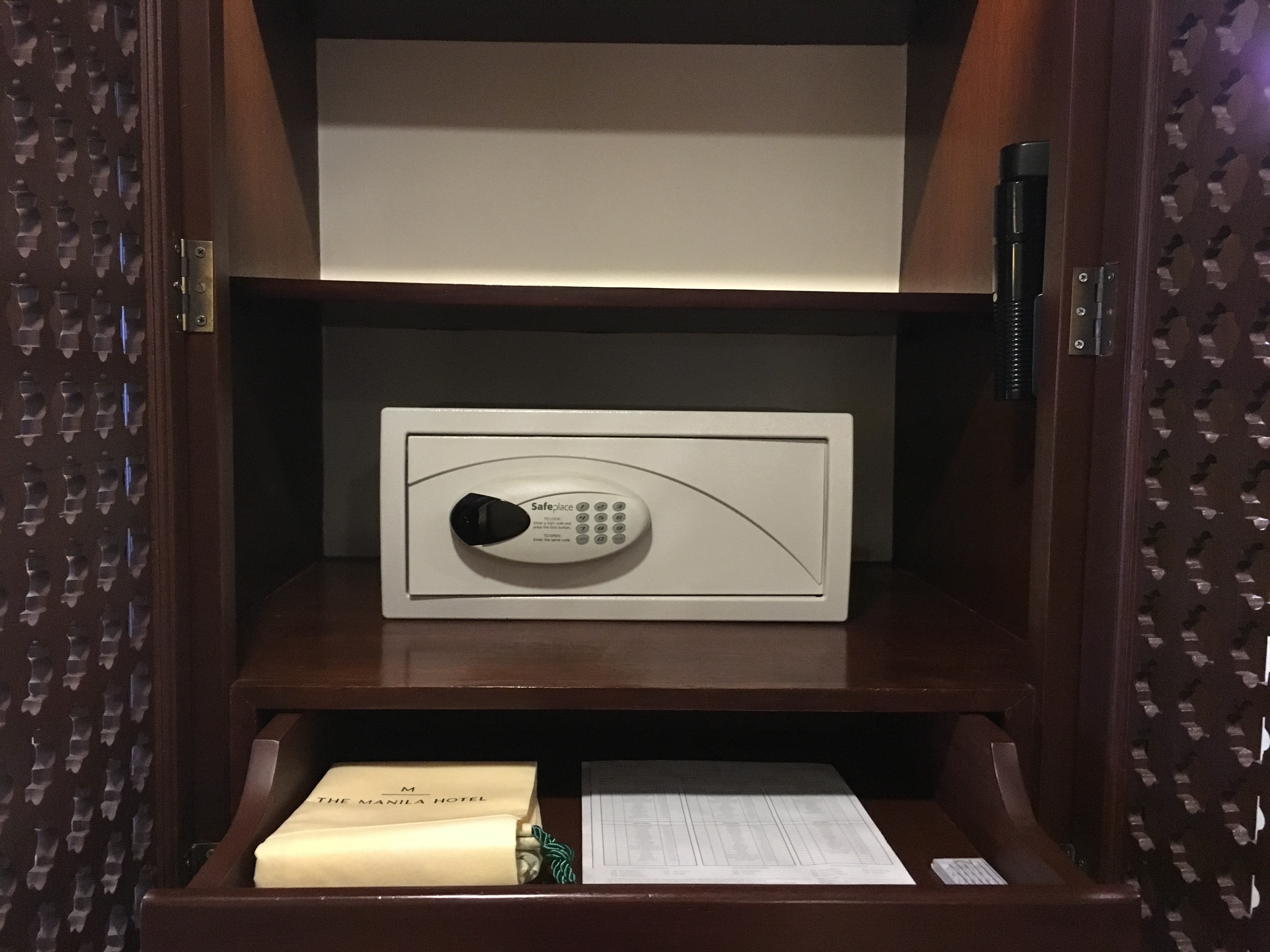 One of the best things about staying in local hotels are the abundance of channels you can choose from. Most international hotels I’ve stayed in almost always have at most, two English channels. In the Philippines, if you avail of a cable provider, you get a lot of foreign channels (English, Korean, Chinese, etc) as well as the local ones. We didn’t have to settle with switching between HBO and Fox Movies. They also have a channel guide to help you navigate your extensive channel options. Personally, Cinema One is my favorite weekend channel for binge watching movies. 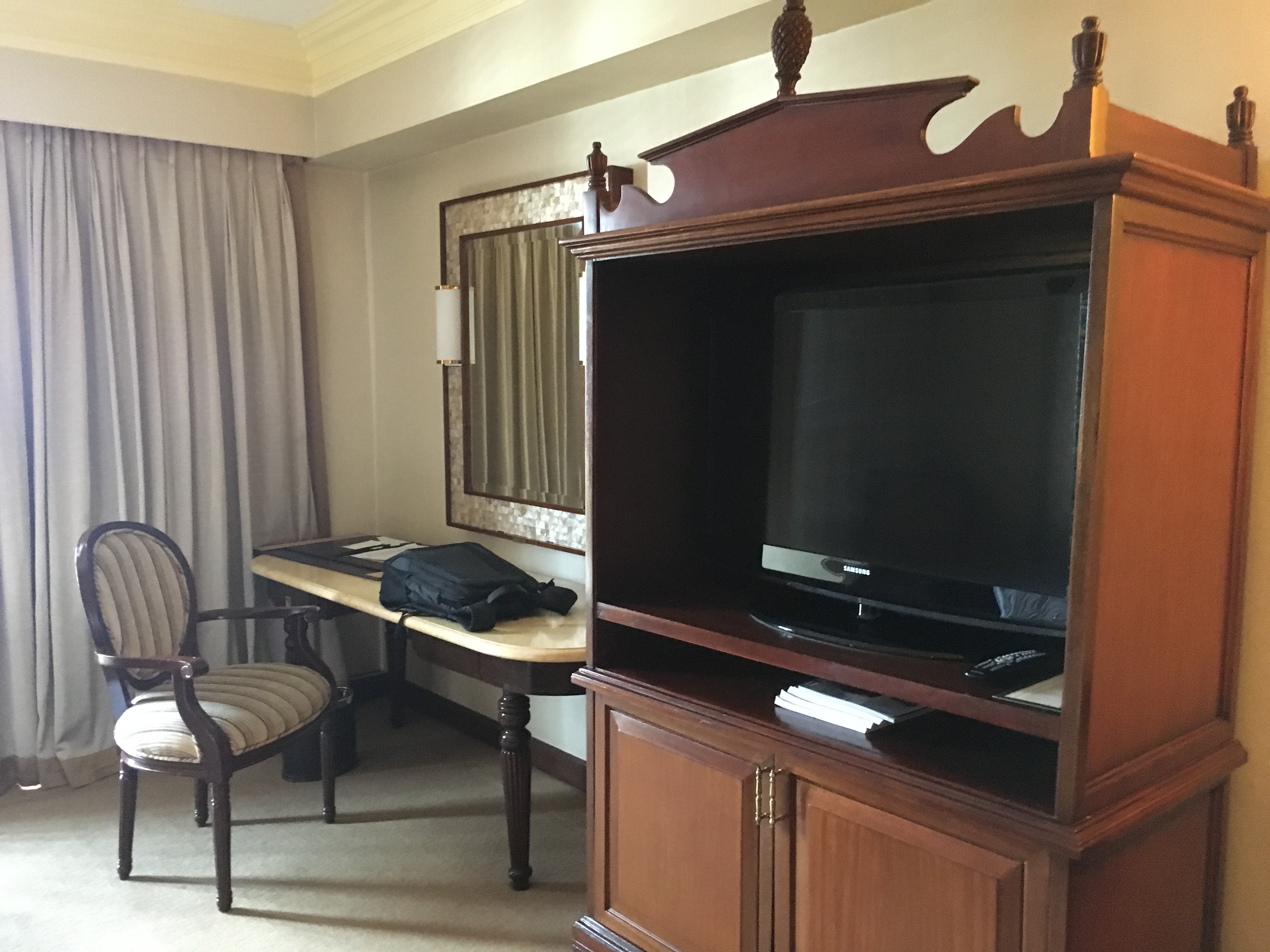 While one side of our room was just one big window, we kept our curtains closed the entire time while we were there because we didn’t really have the best view. Since we were on the lower floors, our view was just meh and I think a higher room would have a more peaceful view of the ocean. 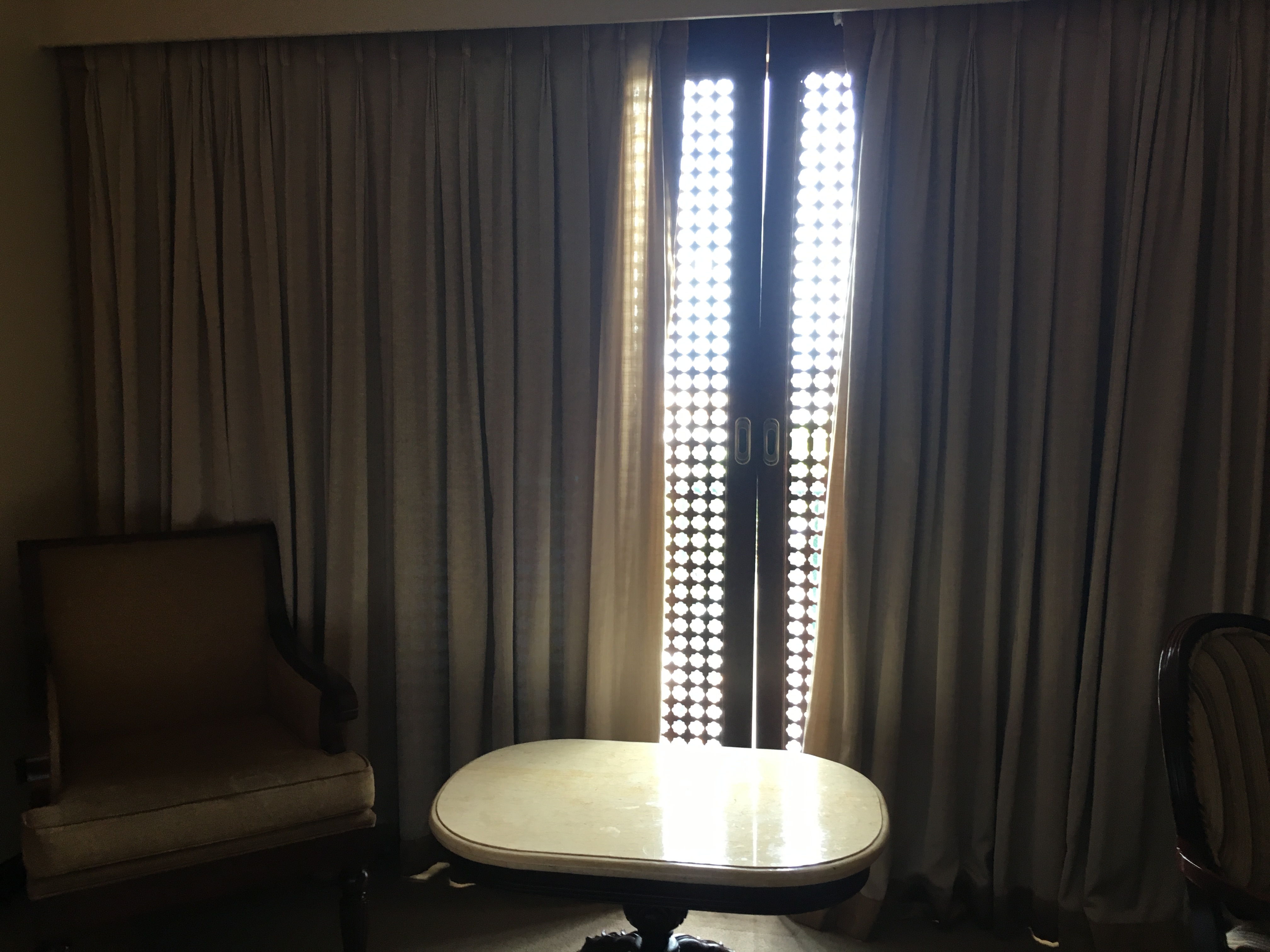 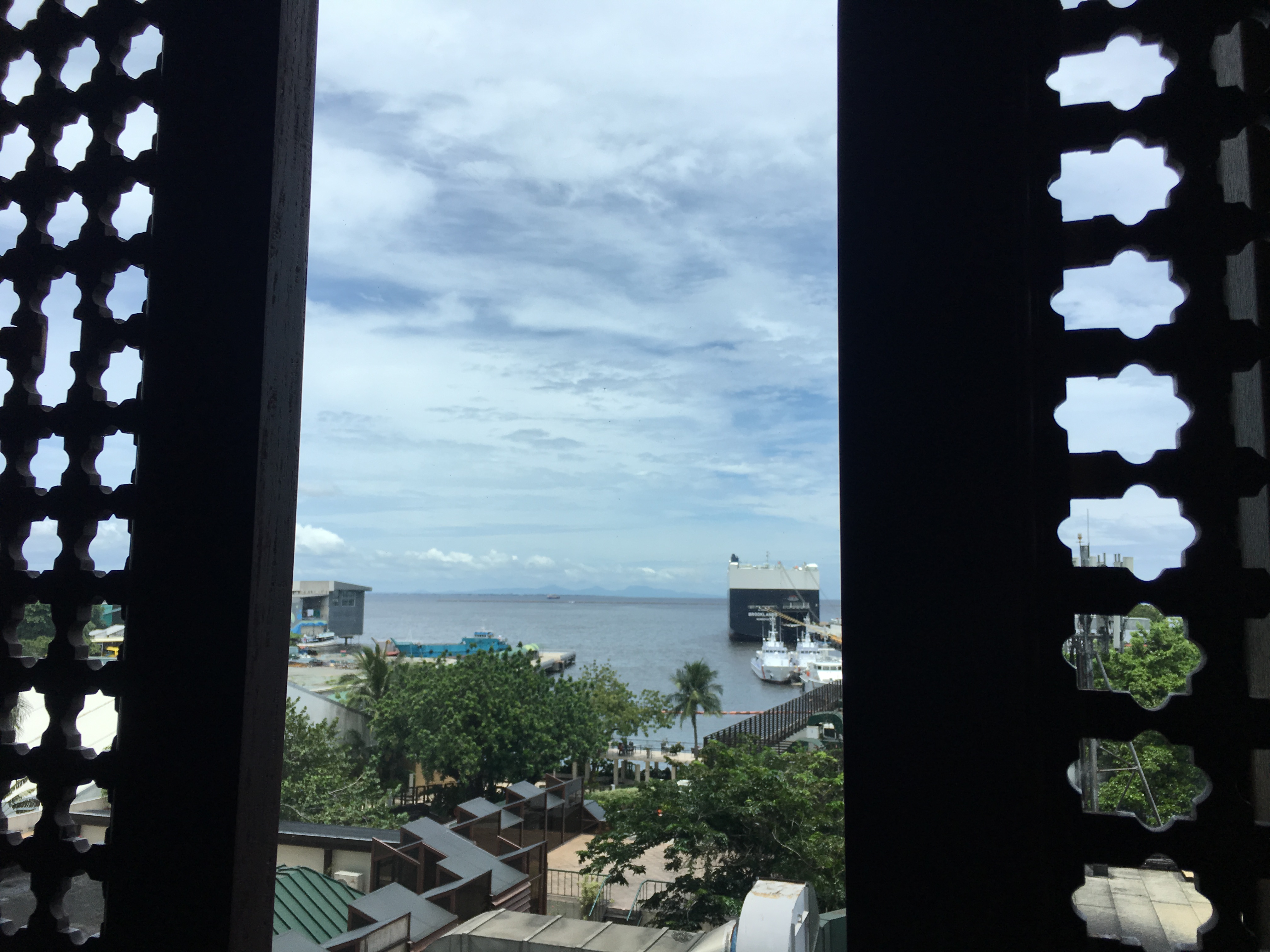 When I first spotted the speaker, I got excited because I like listening to my own music. C and I sometimes listen to random songs and hold our own bedroom dance parties (some days, it’s to the tune of Pussycat Dolls’ Don’t Cha). They do have to update their speakers because the one they have caters to earlier generations of iPod. It was disappointing. 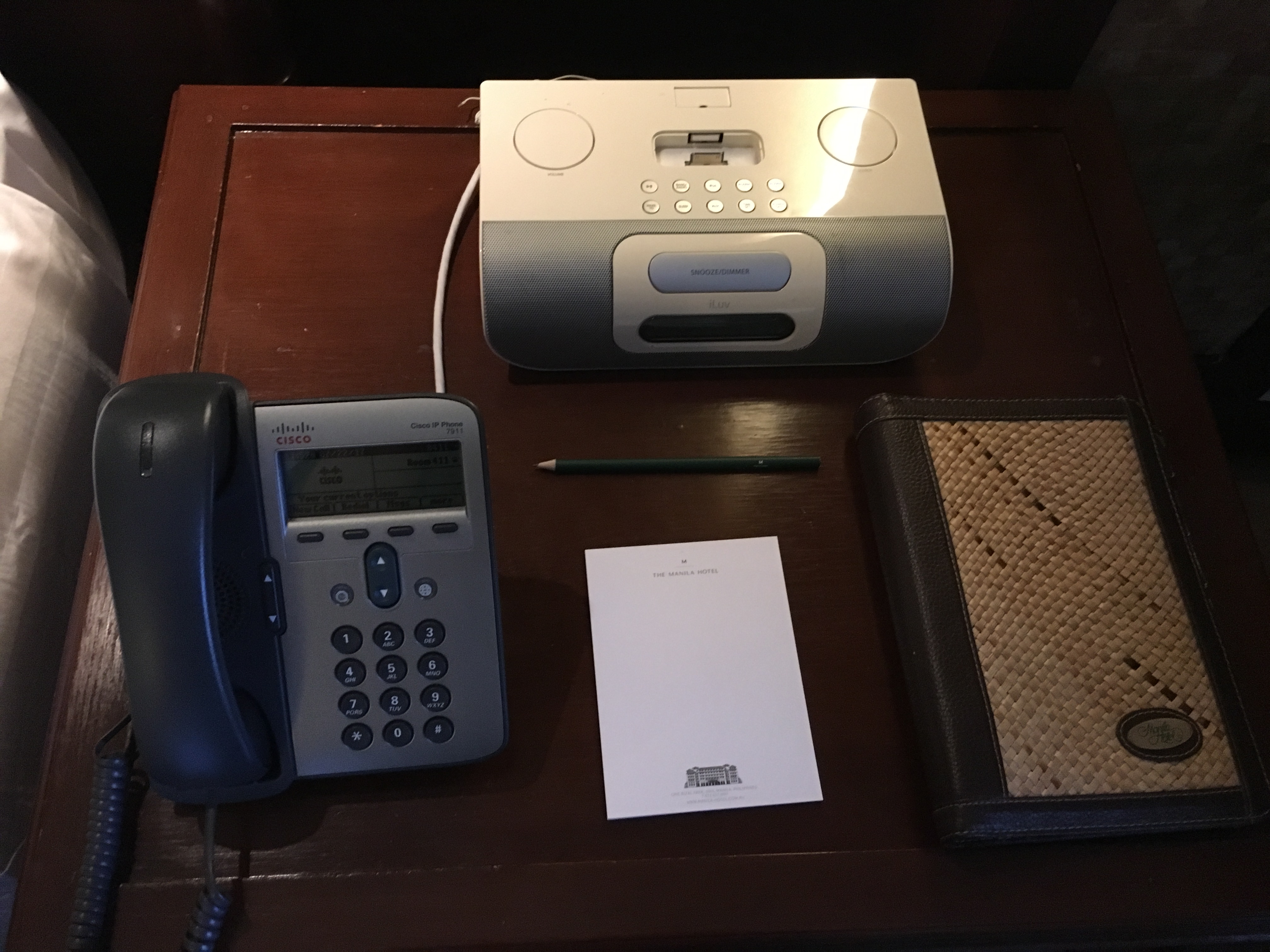 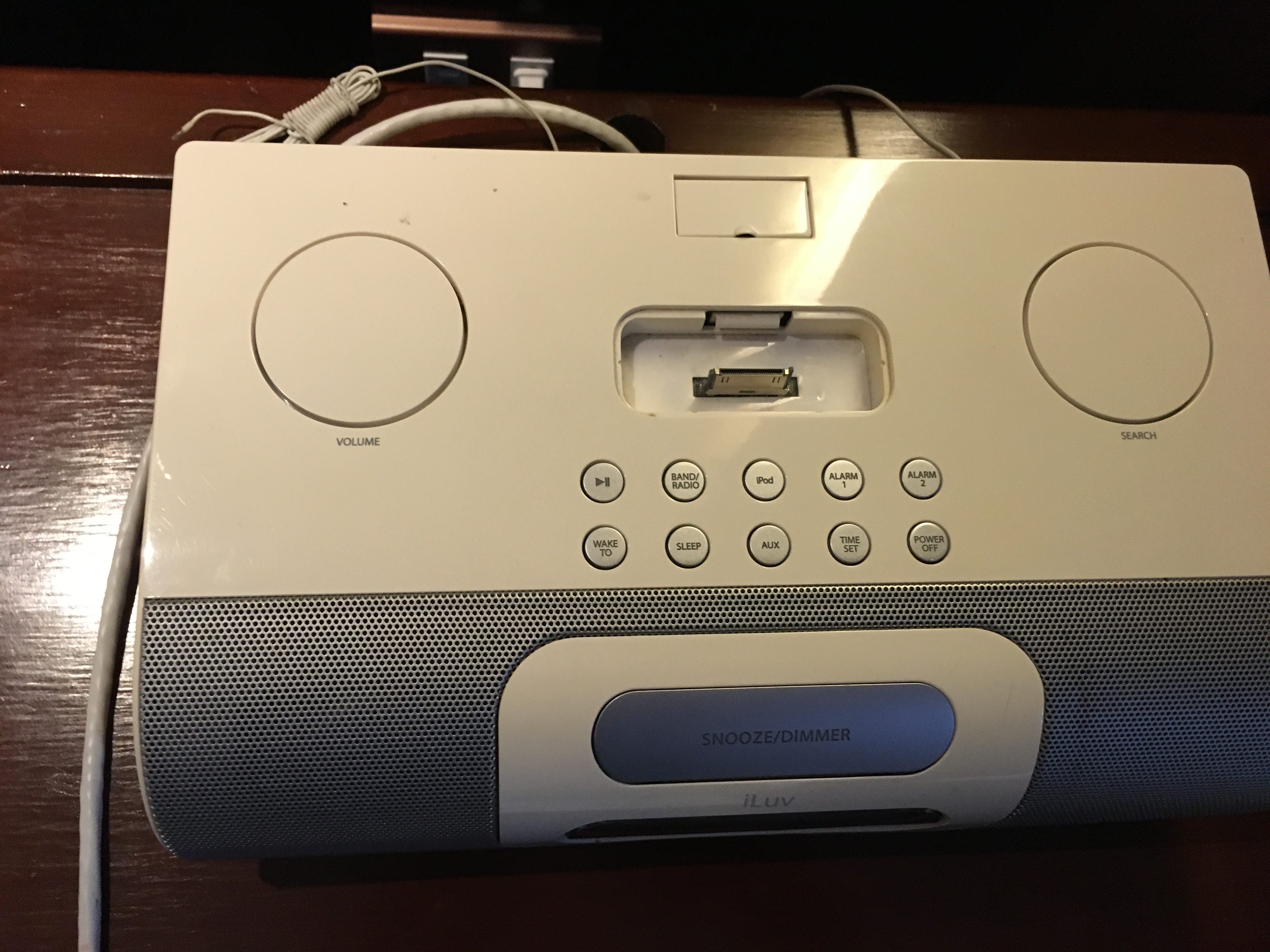 While checking in, we were asked which room we wanted – the one with twin beds or the one with a king-sized bed, and of course, we went for the room with king-sized bed. I guess the biggest reason why I don’t plan on staying in this hotel again is the fact that the room we got did not have a king-sized bed in it. We had two twin beds pushed together to form one bed. C and I often fall asleep talking and cuddling. The indent in the middle of the bed was not conducive for cuddles that we both ended up facing different directions at the opposite sides of the bed. I repeat, this bed is not the best for romantic purposes. You can clearly see from the photo the part in the middle where it was obviously indented because IT IS NOT A KING-SIZED BED. The bed did look much more put together when we walked in than this photo. I wasn’t able to stop C from jumping in before I got around to taking a picture. Oh well. 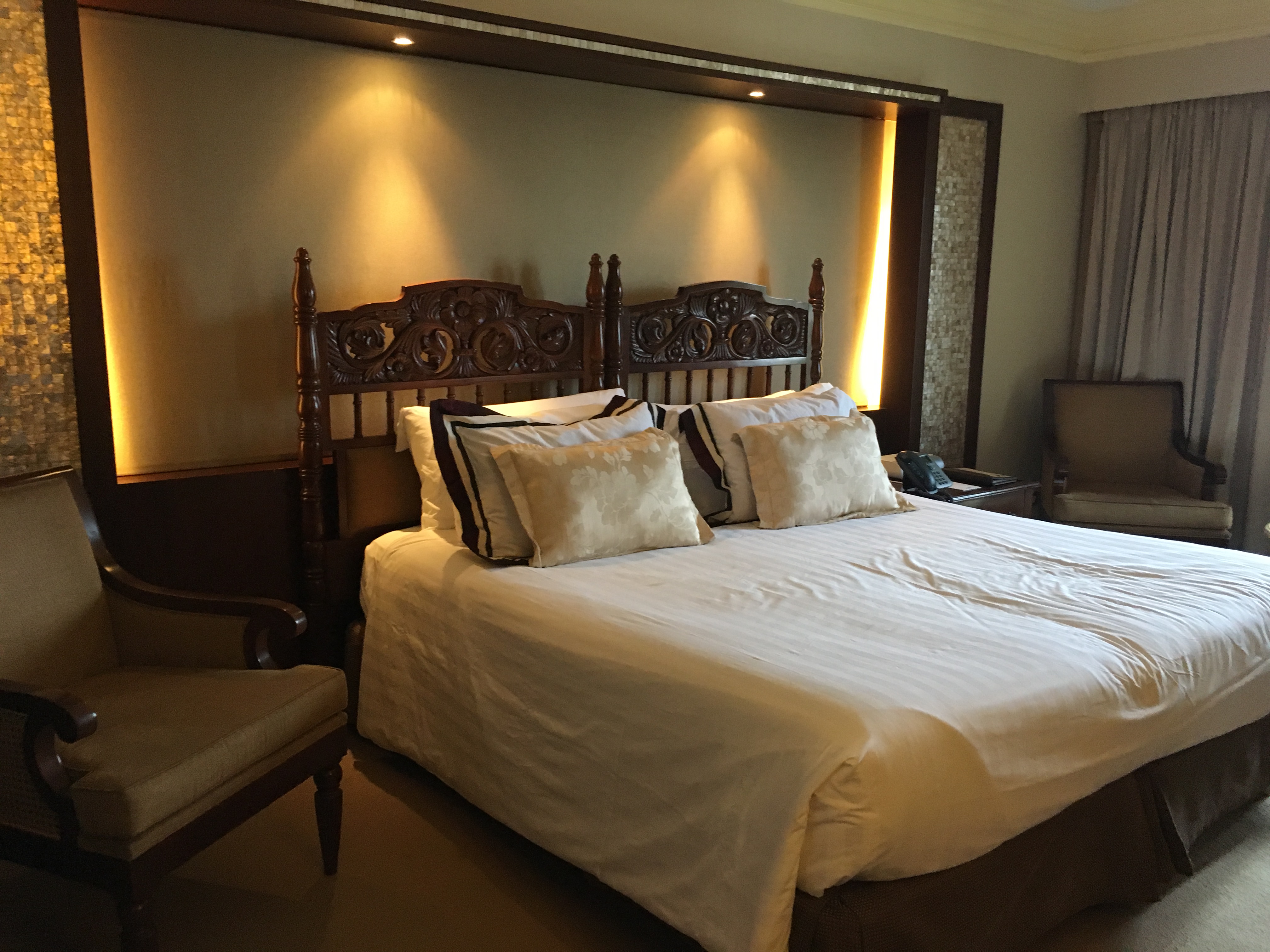 Since he wanted to do nothing, we both brought our laptops to this staycation and maximized their high-speed internet. C spent the weekend playing games with his friends, while I alternated between the tub and staying in bed to work on my blog, watch movies, and go online shopping. I also spent a considerable amount of time justifying to myself ordering room service food to avoid going out. C and I are fans of room service because ~*convenience*~ but the items on the menu was just. so. expensive. There were a number of restaurants in the hotel itself, such as Cafe Ilang-Ilang where we had our buffet breakfast and where you can also avail of buffet lunch and buffet dinner. We weren’t in the mood for buffets, Chinese food (they had a Chinese restaurant), and both restaurants we wanted to try had a dress code and we literally just packed loungewear and casual clothes. I doubt we could pass off our pairs of shorts as smart casual to get into The Champagne Room and Cowrie Grill. We decided to go out and find somewhere to it within the vicinity of the hotel. I am guessing it’s not the best idea for foreigners to do because the area surrounding the hotel does not scream safe at all. We were followed by a group of children who were asking for some change until we reached a food establishment (to take out pizza!). We avoid handing out money to beggars because you don’t really know whether they are victims of well-organized syndicates and you support these syndicates by giving them cash. We hand out food instead of money. 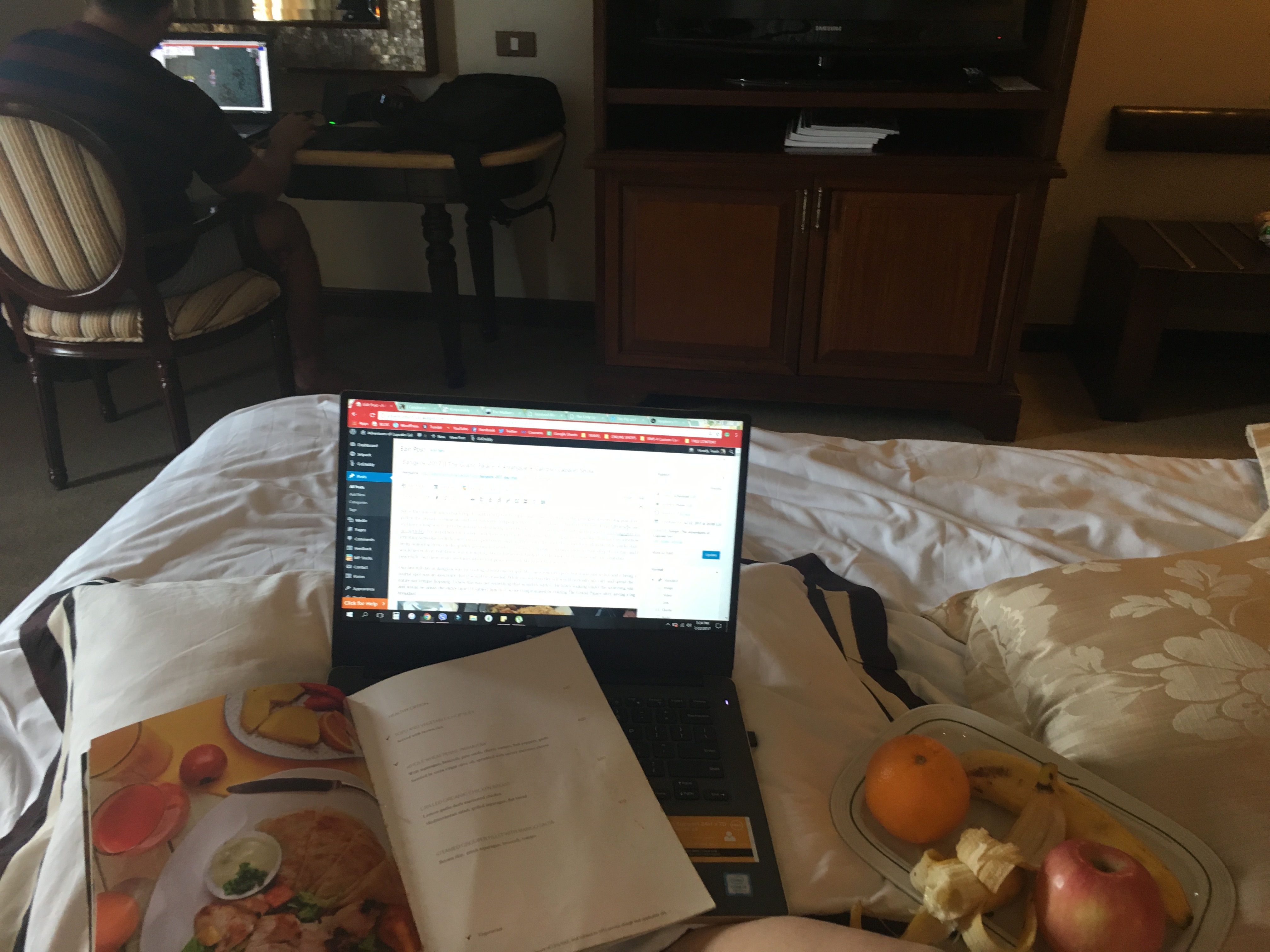 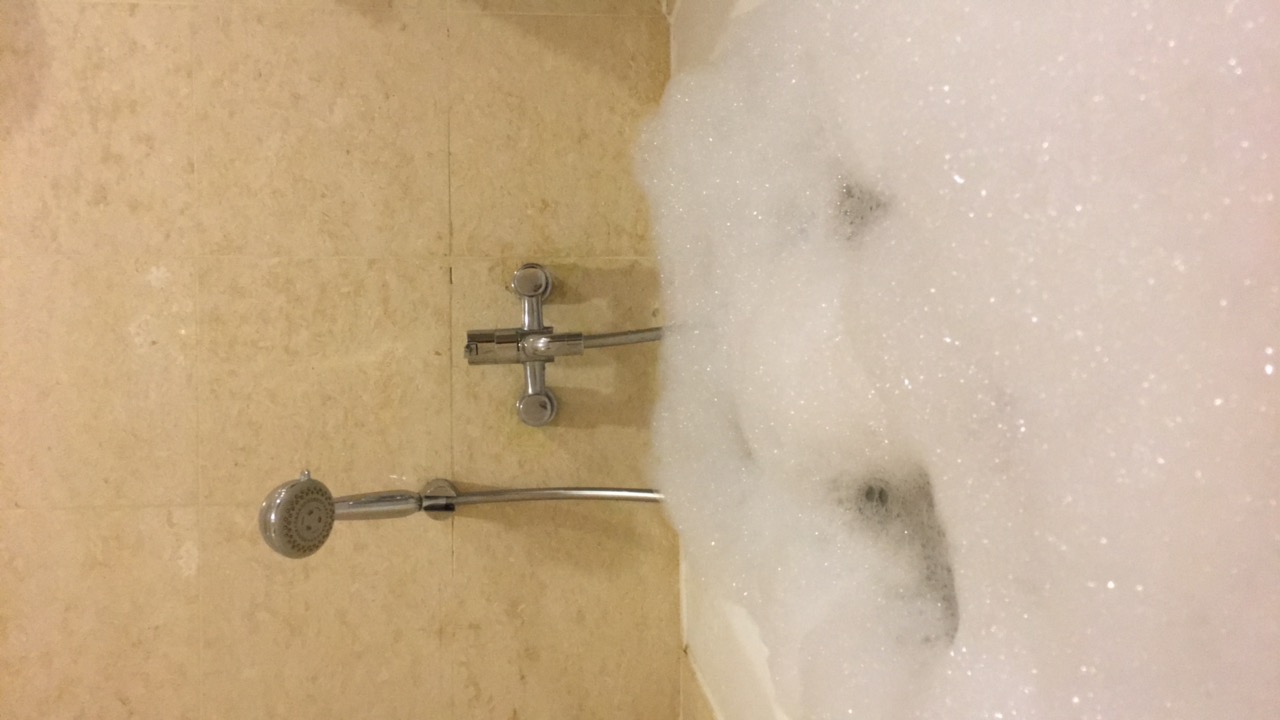 Checking out was such a breeze compared to checking in. Have you ever been to a hotel where your stay wasn’t unsatisfactory but you didn’t really think you’d miss out if you never come back? Honestly, that was what we both felt for The Manila Hotel. But I’d still like to emphasize the positives and the complimentary breakfast that came with the room was one of them. The buffet breakfast at Cafe Ilang-Ilang turned into brunch as their extensive food selection kept us full until it was time for dinner. C and one of his sisters have a one day gap between their birthdays so joint birthday dinners with the family is an annual occurrence. This year, we headed out to Gringo in Makati for some ribs and chicken (because chicken boy). C’s family have never failed to treat me like one of their own. It’s nice to witness how family dinners have evolved from their family unit, plus me, and this year we were joined by his sister’s fiance and future mother-in-law. 🙂 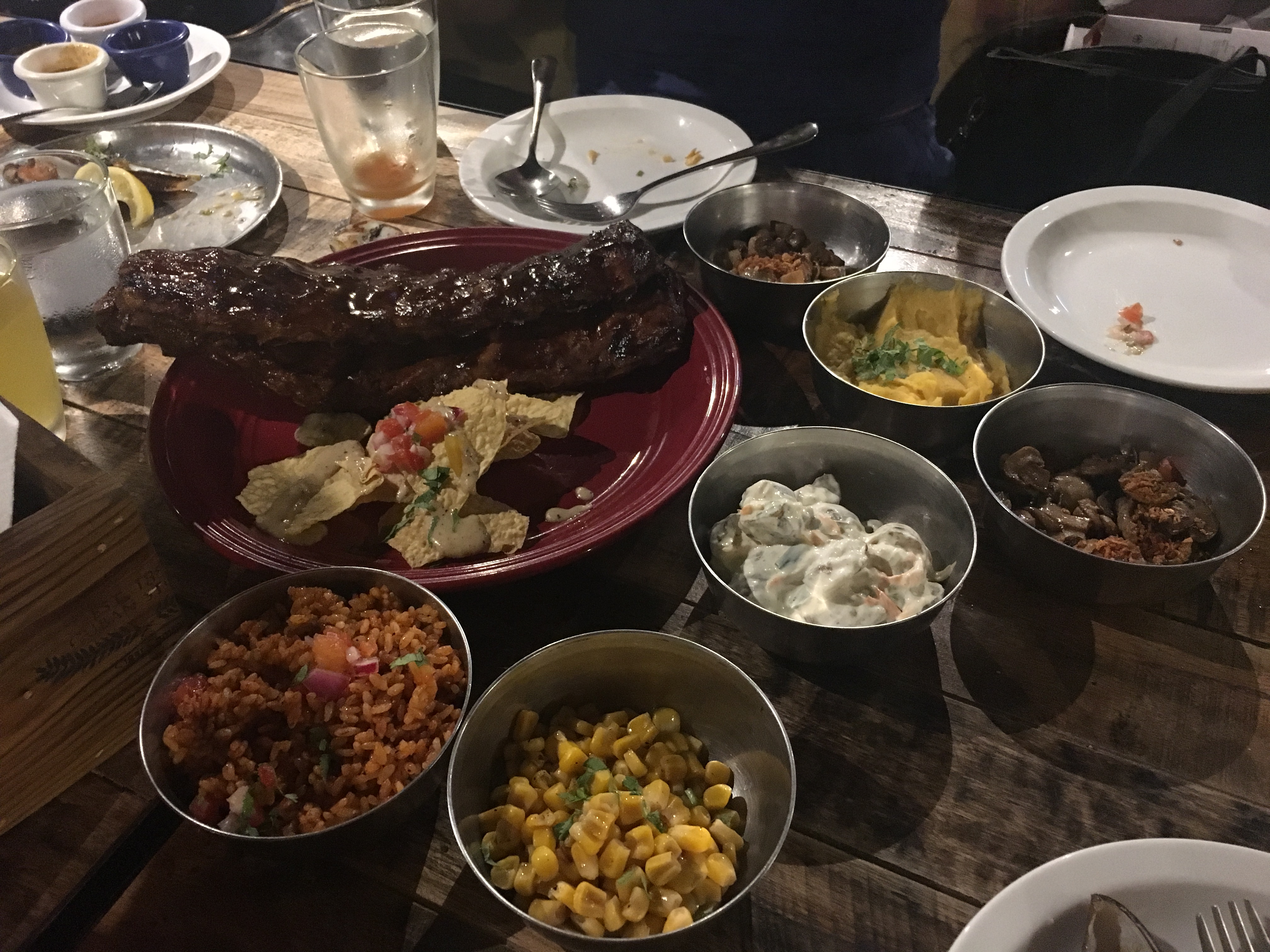 A sweet ending to a pretty chill birthday weekend, if I must say so myself. 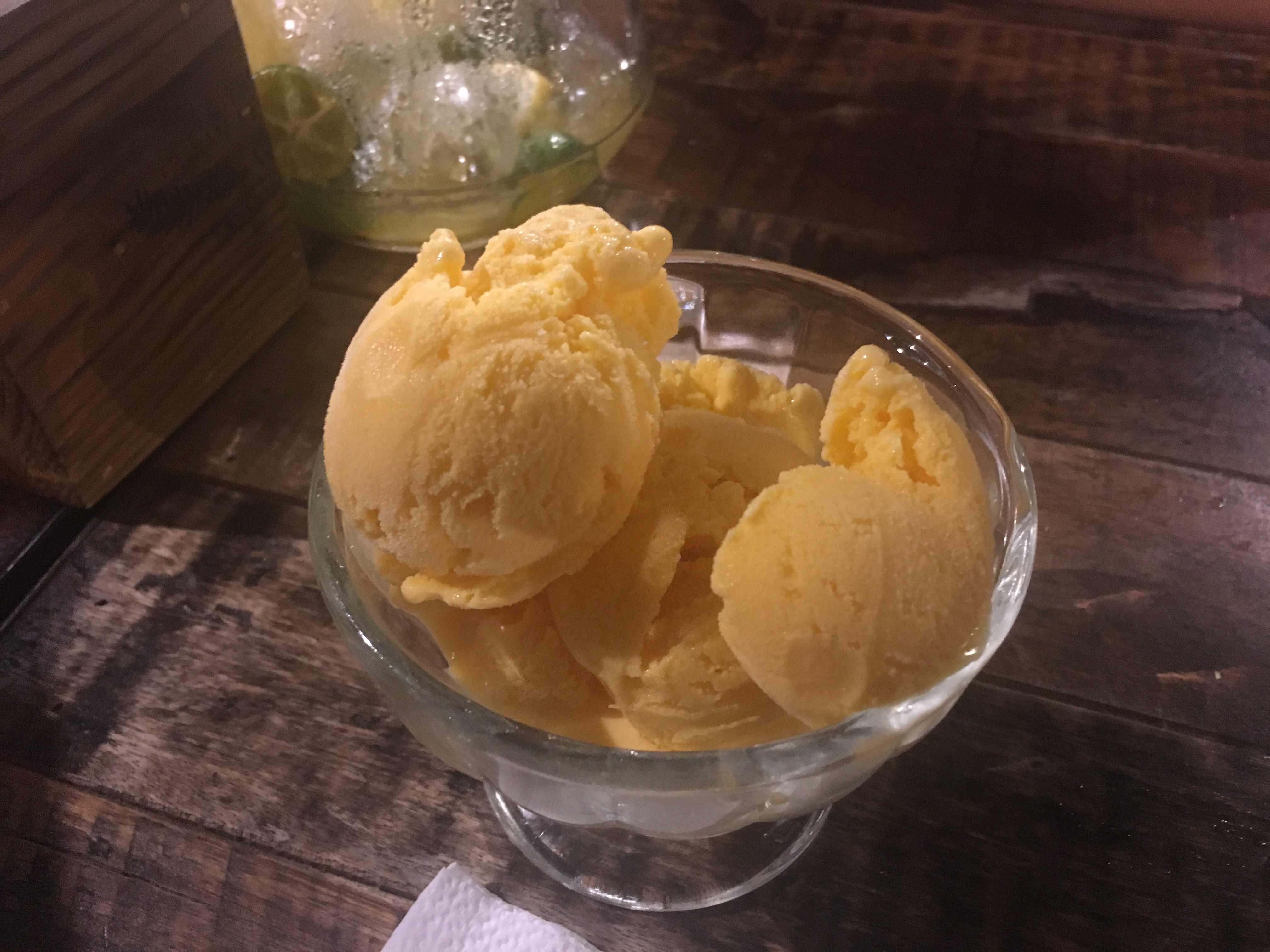 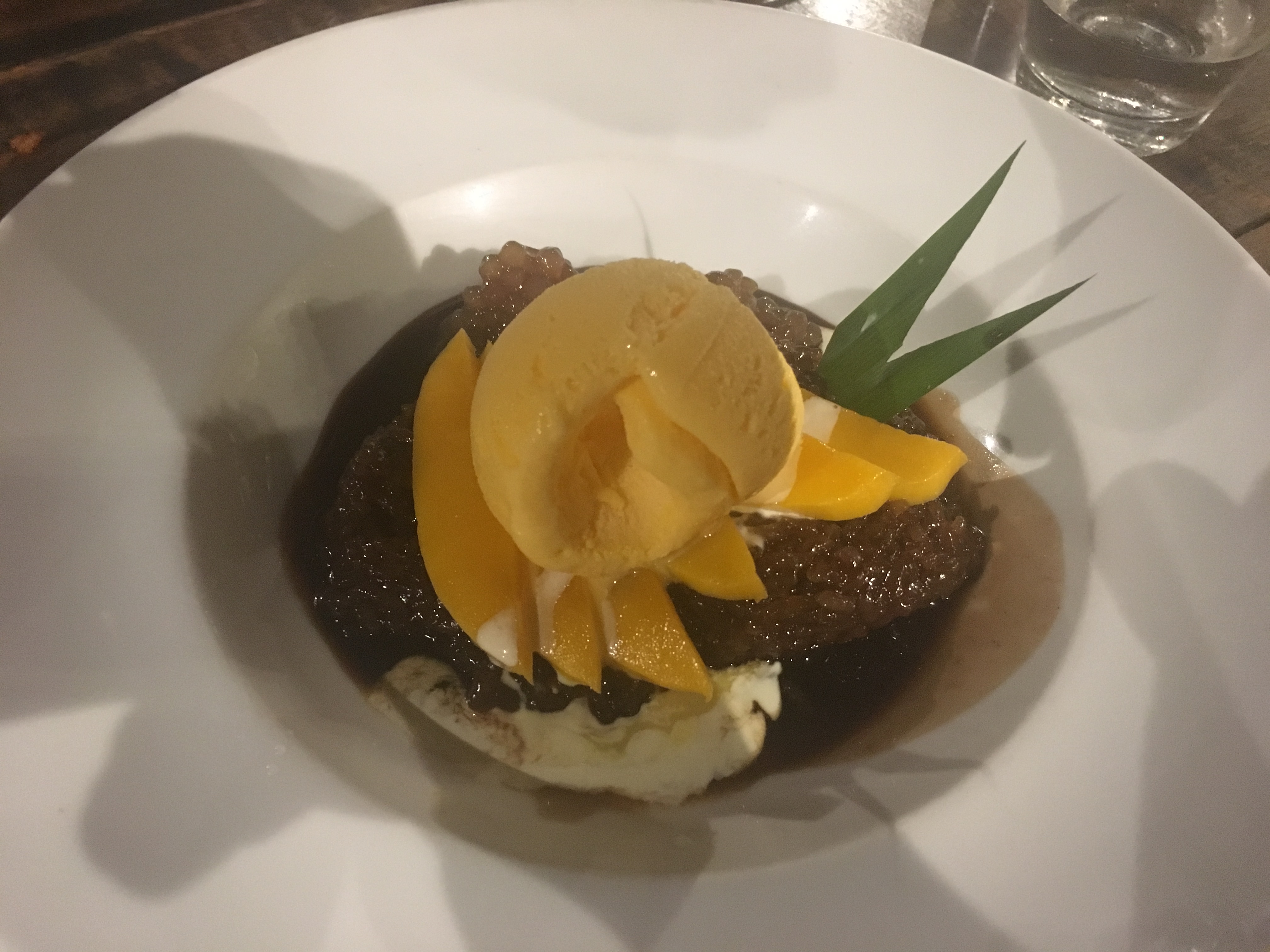 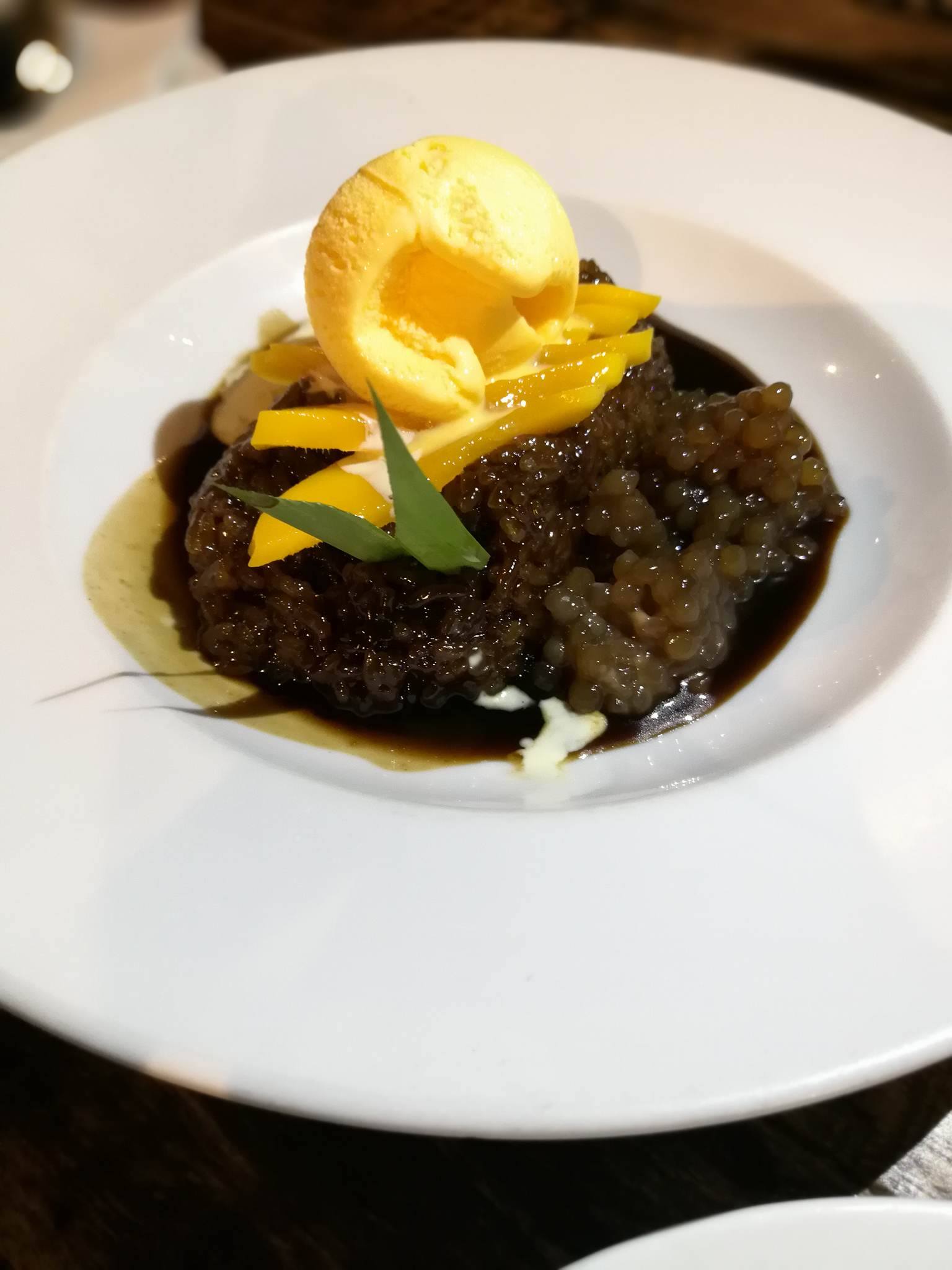