Hiiiiiii! For some weird reason, views on old posts are picking up, and it’s just.. well, weird. I used to host this blog on another platform and had a slightly different domain, so I don’t know why that’s happening. I migrated all of them here, so posts that were published before 2016 are a hot mess, and since I’m a little  OC, I went back to work on it. I’m not even halfway done with it yet. T_T

Since I have emptied out my backlog of travel posts, I’m back to making baking content [because this blog is not called ‘Adventures of Cupcake Girl’ for nothing]. The other day, we were defrosting the fridge and I realized that we’ve had overripe oranges for a while now. I checked our other supplies and found half a pack of marshmallows from when I made Chicken Boy S’mores Cookies for Valentines Day. This is usually how most of my baking sessions go, with me using whatever is available at home. 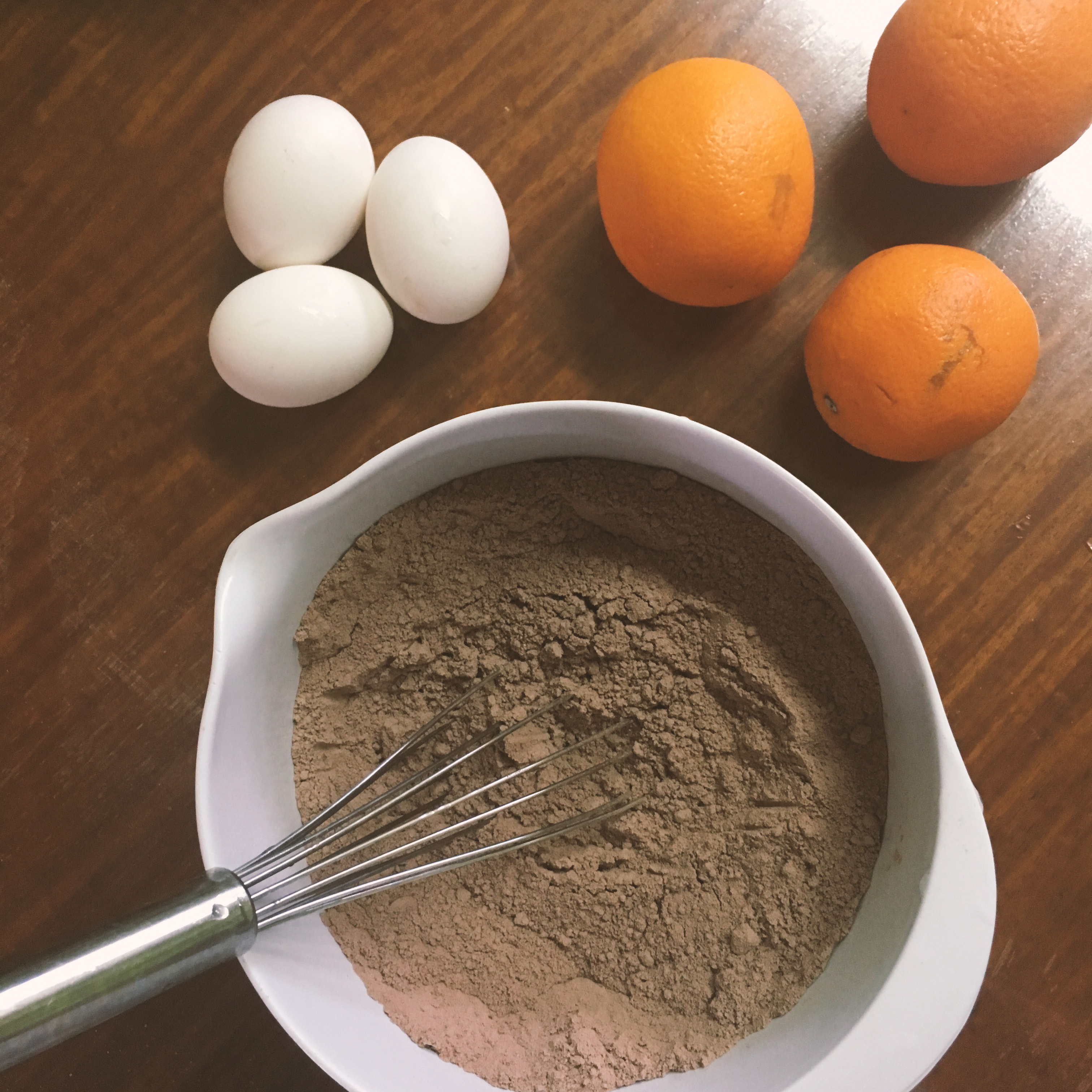 I substituted freshly squeezed orange juice instead of hot water in the recipe, to give it the orange flavor. Orange and chocolate is not a new flavor combination so I was pretty confident that at the least, it wouldn’t suck. I am linking down below a base chocolate cupcake recipe. I have the tendency to modify as I pleased, but this is the ‘base’ chocolate cupcake recipe I play with. 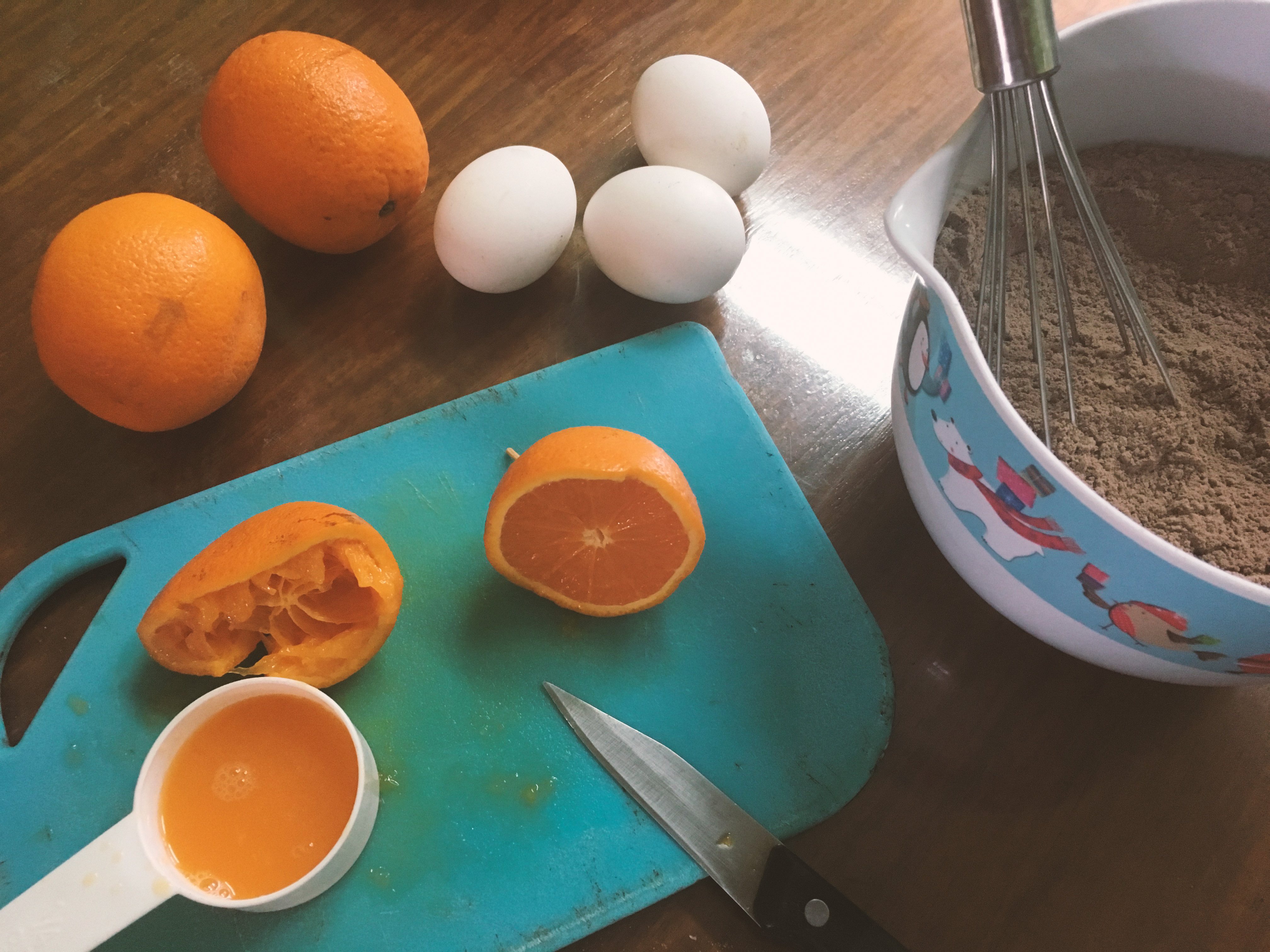 What was funny was that I manually squeezed each piece of orange, when we had both a juicer and a lemon squeezer at home. I only even remembered after I had already squeezed both oranges. I had three oranges at hand but only needed two oranges to get enough juice (3/4 cup). However, if I ever make this again, I would put in more oranges (maybe 1 1/2 cups of it) to make sure that the orange flavor is not overpowered by the chocolate. 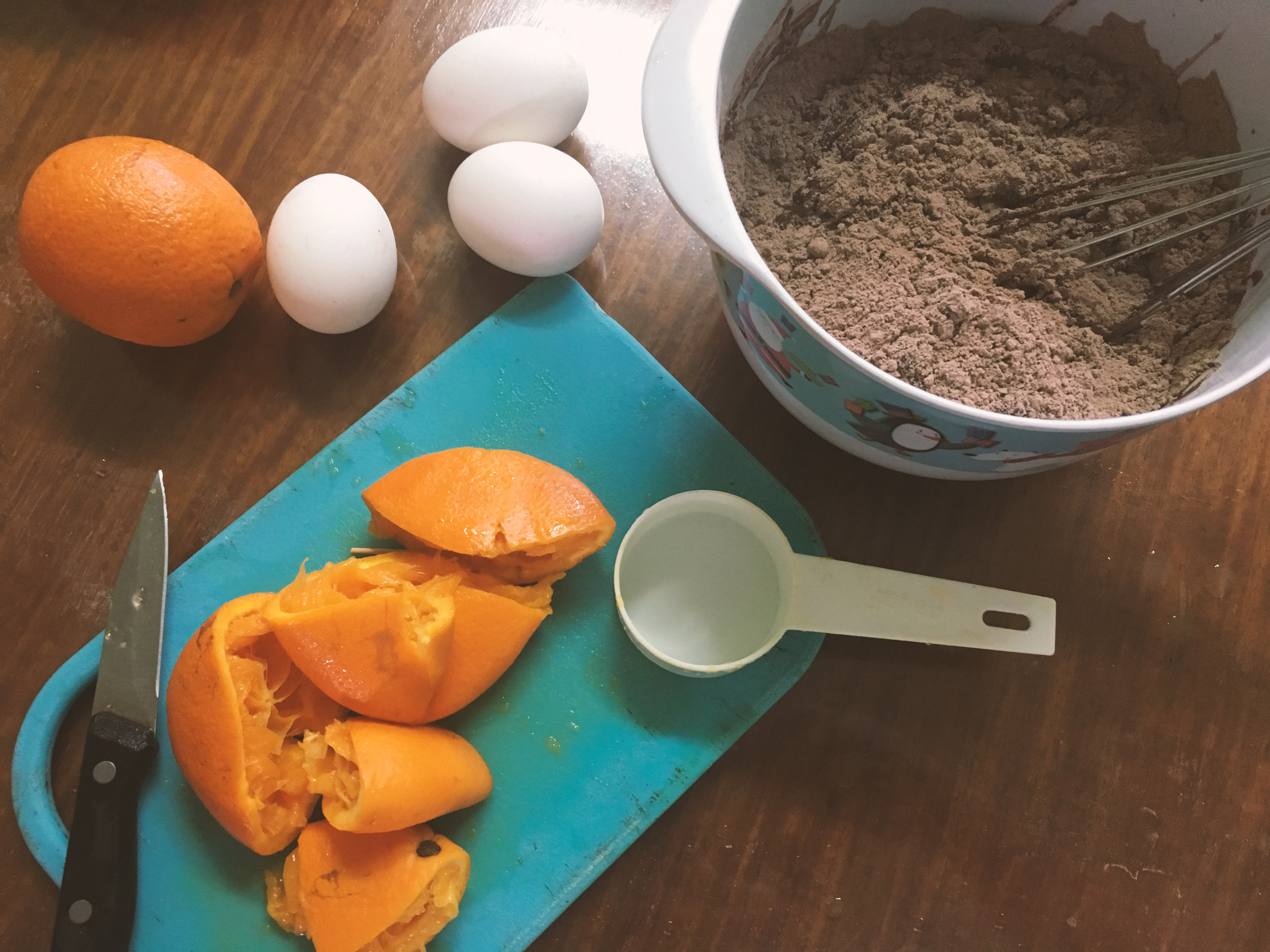 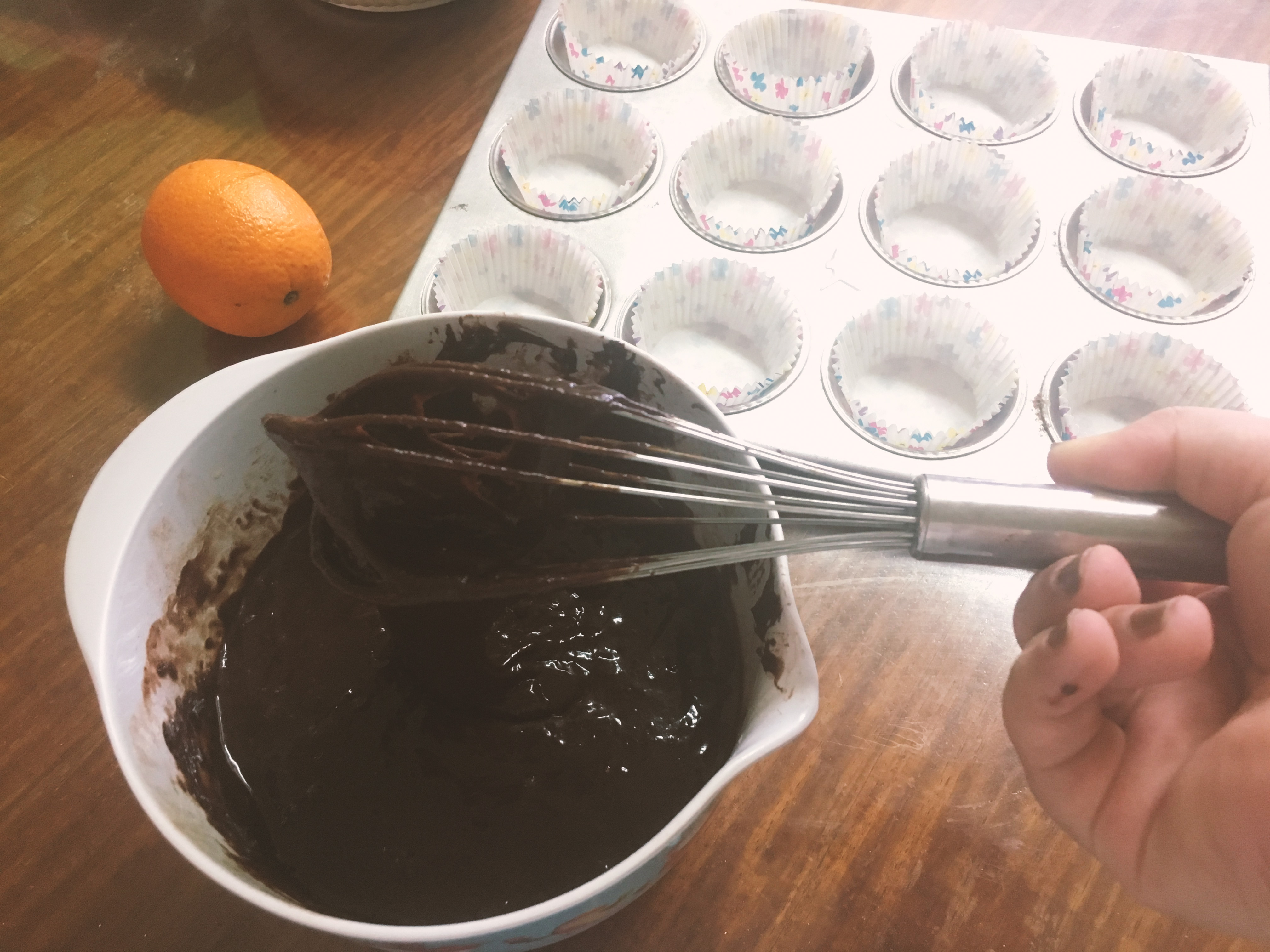 I placed a marshmallow in the middle of the cupcake before putting it in the oven because I wasn’t sure what would happen and I wanted to know, okay. 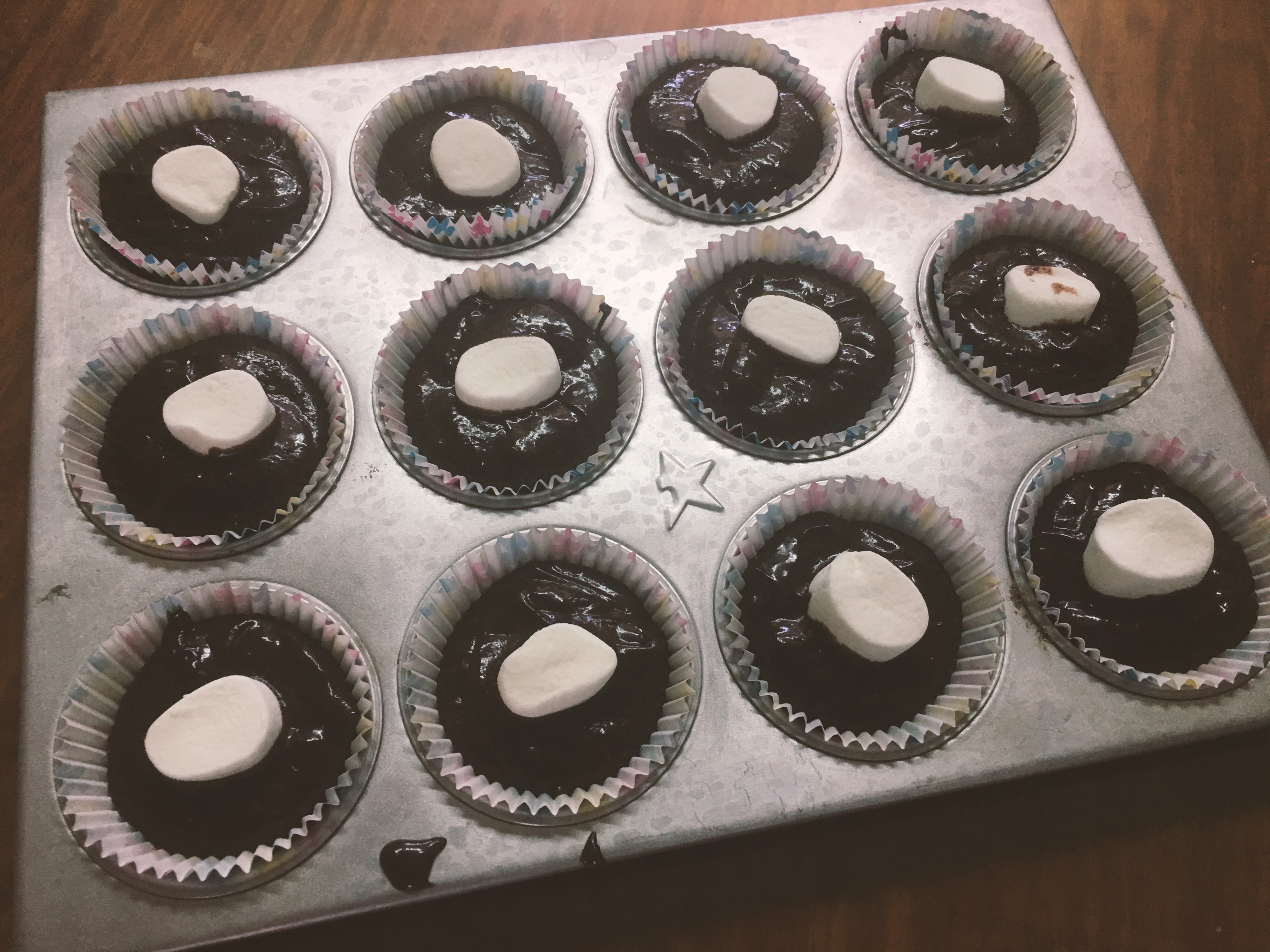 I baked it for 20 minutes instead of 15. Fun fact: apparently, if you put in a marshmallow inside a cupcake, it will make it harder for you to check if it’s already done or not because your toothpick will be sticky and pick up a lot of marshmallow/cupcake batter. I initially thought that the marshmallow would stay in the middle of the cupcake but most of it melted on the top. 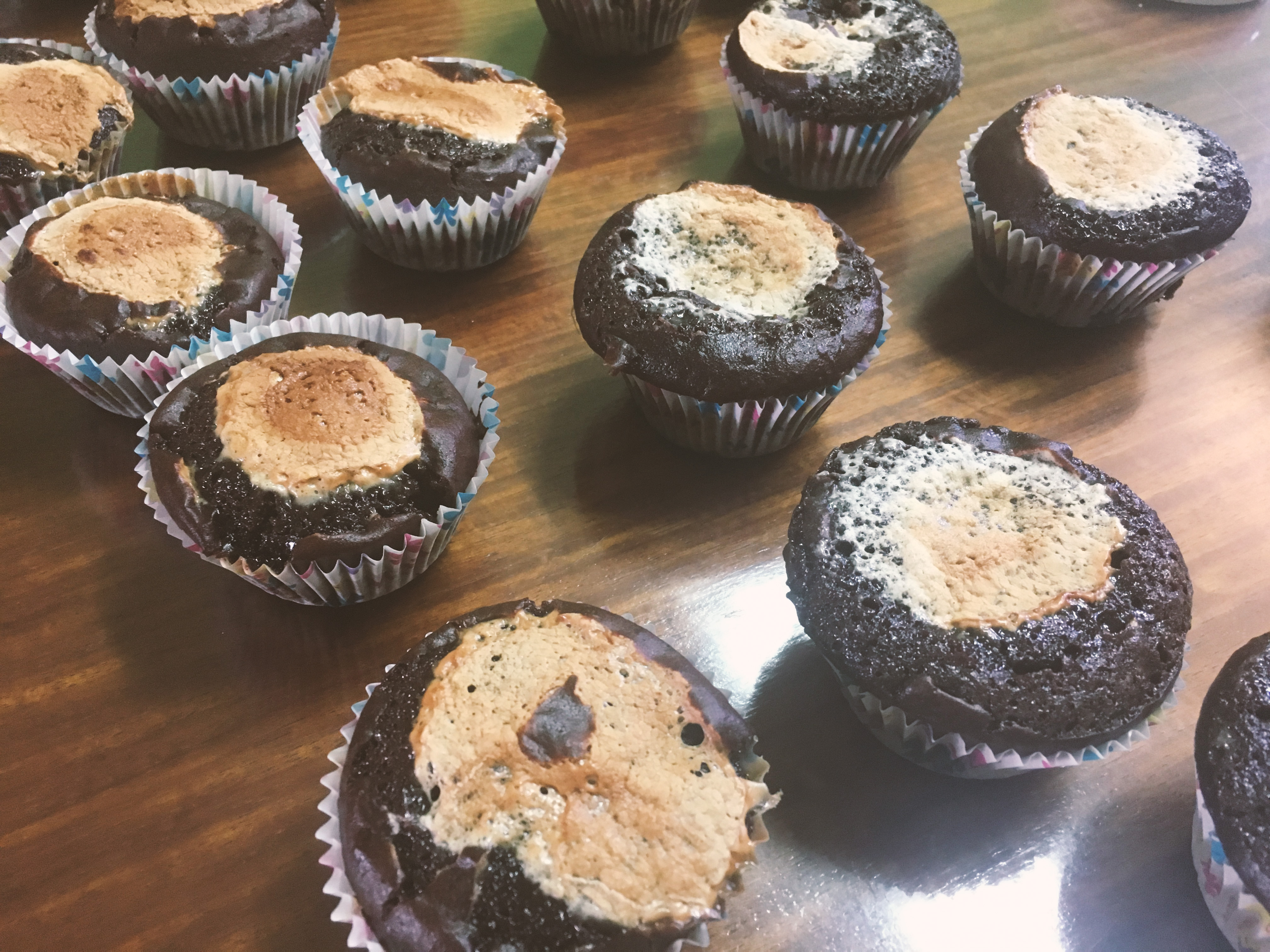 A bit disappointing, but Nutella makes everything better. I smeared a generous amount on top of the cupcake which did two things: it made it yummier, but it also masked the orange flavor and there was barely a hint of it upon tasting. 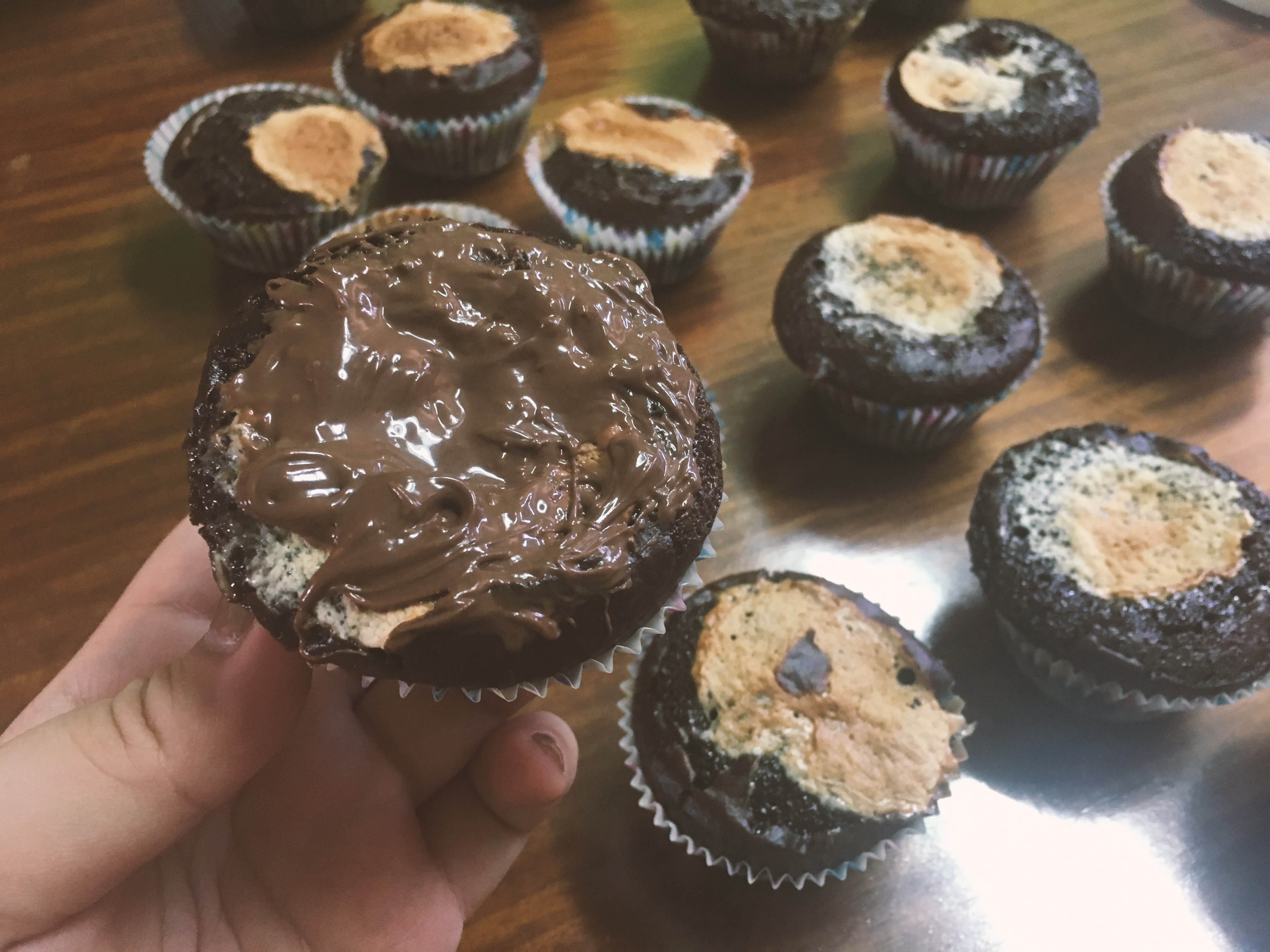 Good thing that I had an orange left. I thoroughly washed it, mixed Nutella and orange zest together, and topped it with more orange zest. I’m crazy about citrus. 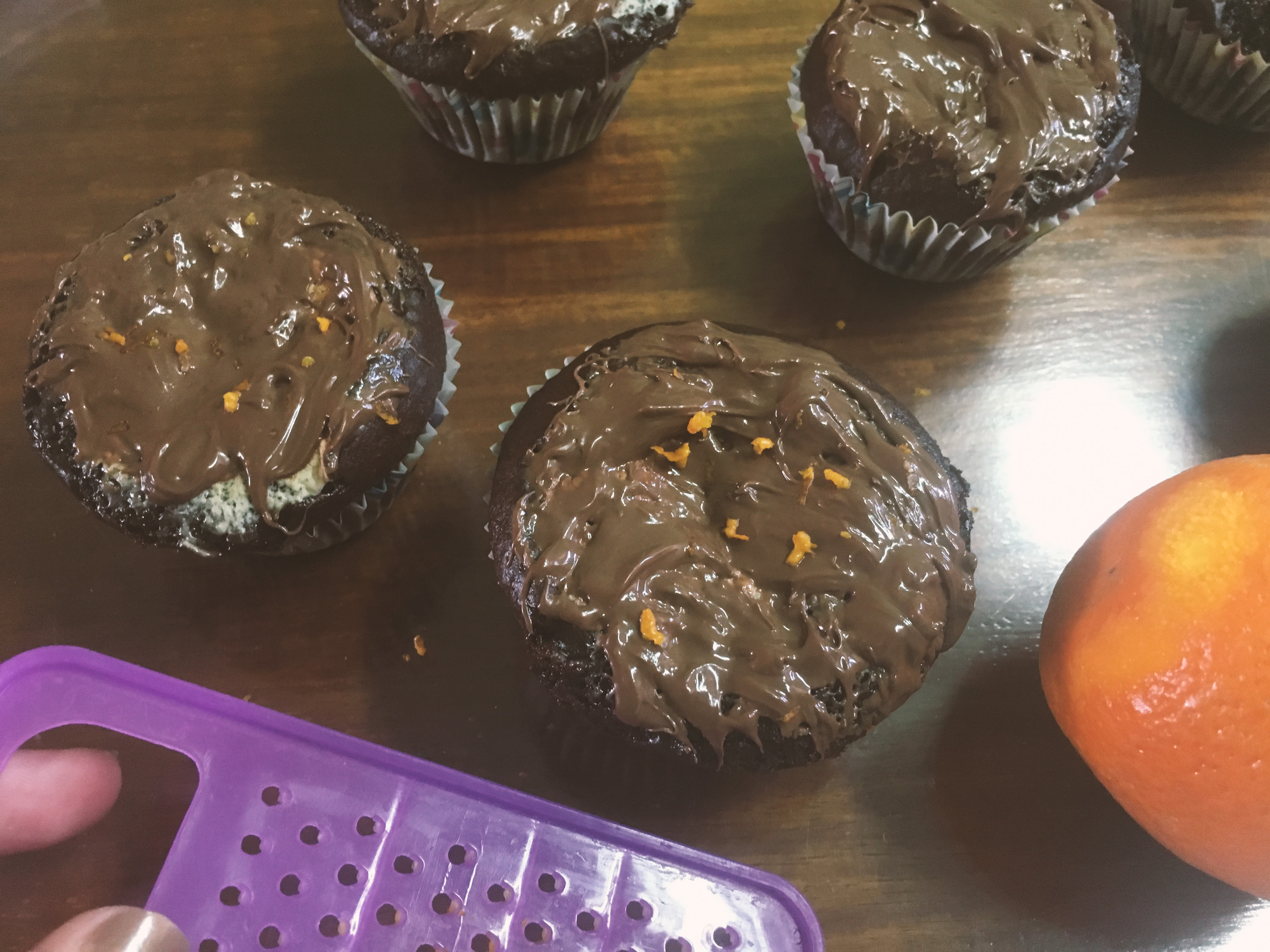 (This turned out to be a nice photo in the end, but it was annoying to be grating the orange and having everything fall on the table instead of the cupcake haha) 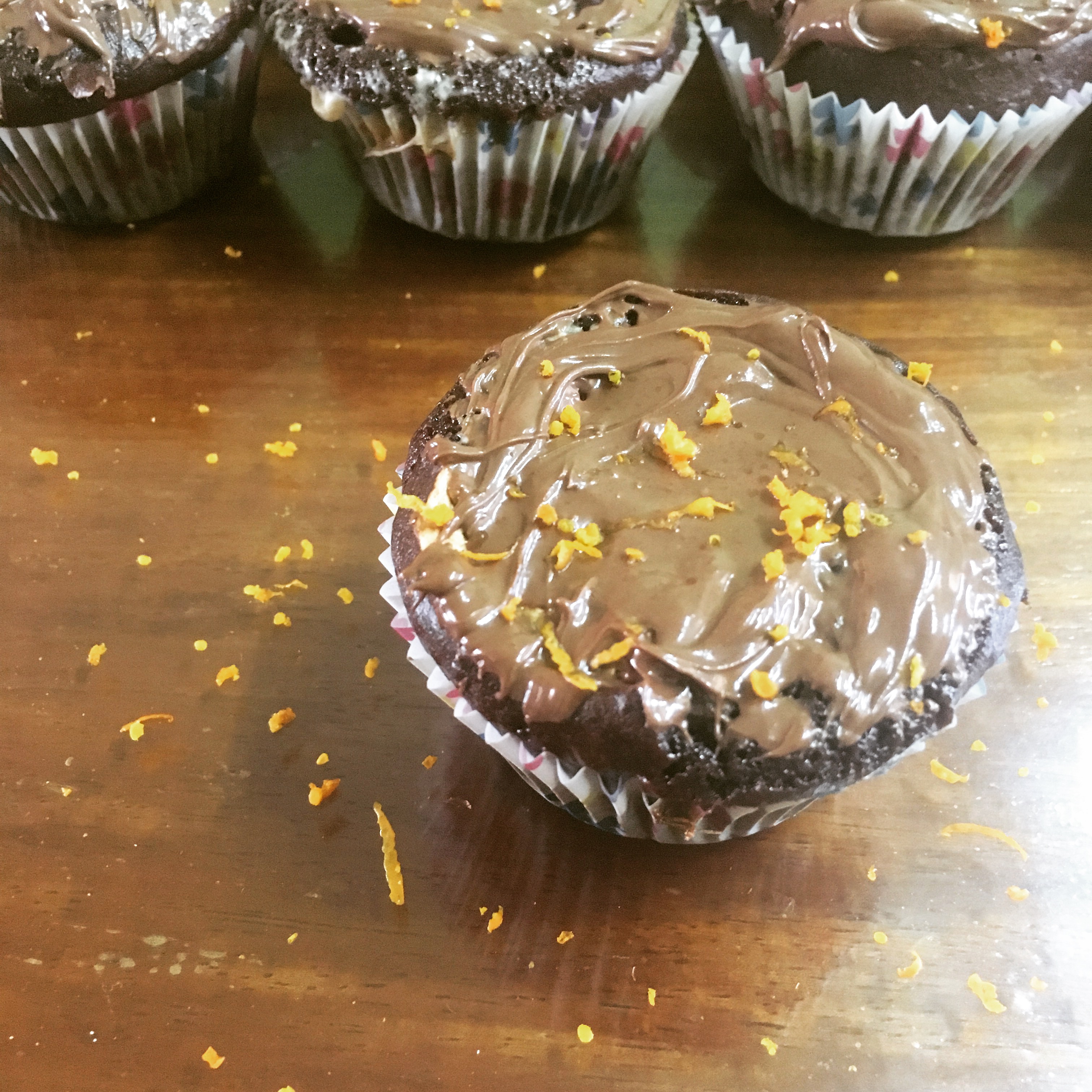 The kitchen smelled a mix of freshly baked chocolate cupcakes, Nutella, and of oranges. It’s the type of fragrance I wish I can bottle up and spray on, especially on days when things don’t go my way. I’m trying to lose weight so I only had one, and made both siblings bring the rest to school. Ha! 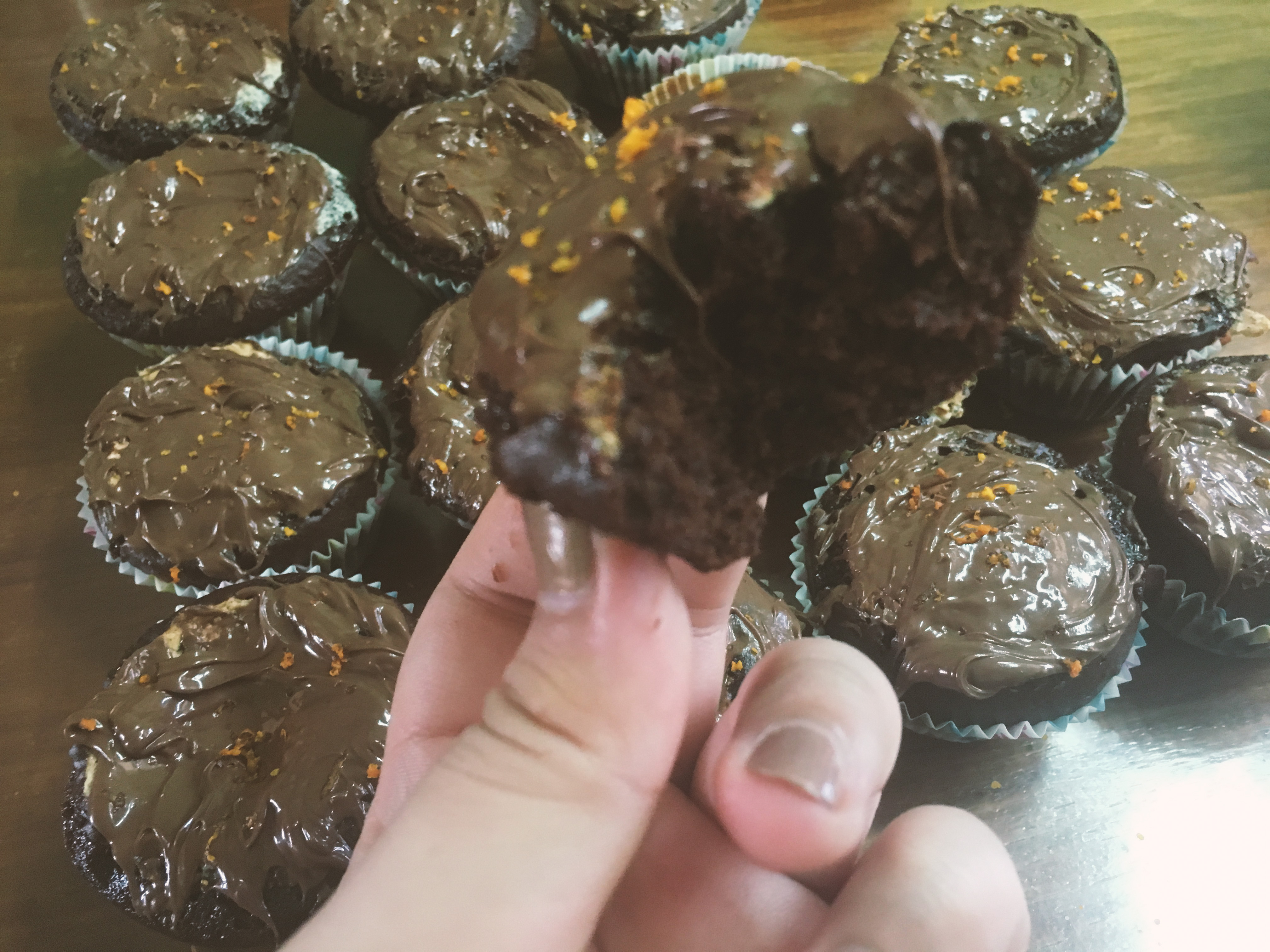 Any other ideas on what other flavors to mix with chocolate? Come on, be generous with it!