I’ve been working on getting the rest of this travel series out before the month ends, which include writing them in advance and automatically publish them to a schedule. The project I’m on at work is ending and it means a couple of things with regards to my schedule. After working the night shift four days a week for more than a year now, I’m back to being on day shift for five days a week. I’m also unable to work most days from home now. I honestly prefer working from home since I am more productive with my time when I don’t have to spend a total of six grueling hours trapped in the mess that is Philippine traffic. Now that I’m back to commuting daily, I foresee exhausting days in the future where I would have less time for this blog after work as I probably will pass out in bed once I get home. I’m always grateful for my job (I also like the people I work with which helps out with it a lot), but I am going to miss the convenience of missing out on this country’s horrible traffic. Another downside is I’ll make fewer savings without the night shift differential pay and shelling out money for my commute. /sigh/ Oh well, that is life! We make do with the cards we’ve been dealt with and make lemonade out of lemons. (That last one was from having Beyoncé playing in the background while writing this haha!)

Let’s face it, there are days where things simply don’t go our way. Even while we’re on vacation. Especially while on vacation. Take this day in Singapore for example – I went and booked our tickets for the Science Centre Singapore via the KLOOK app that morning, put a white dress on, a gorgeous bold shade of lipstick, and went out to satisfy my burger craving. I took my first bite of the burger, only to find out that my liquid lipstick was so not smudge-proof. It spread well outside my lips and onto my cheeks, under my nose, and on my chin. I bought this shade because it was pigmented, and as it turns out, a pain to remove. After using the moist from a cup of soda and tissue to remove most of the remnants of the lipstick, I ate the burger more cautiously.. which ended up with me spilling some of the ingredients into my white dress. Cue mantra: this are just lemons, this are just lemons. 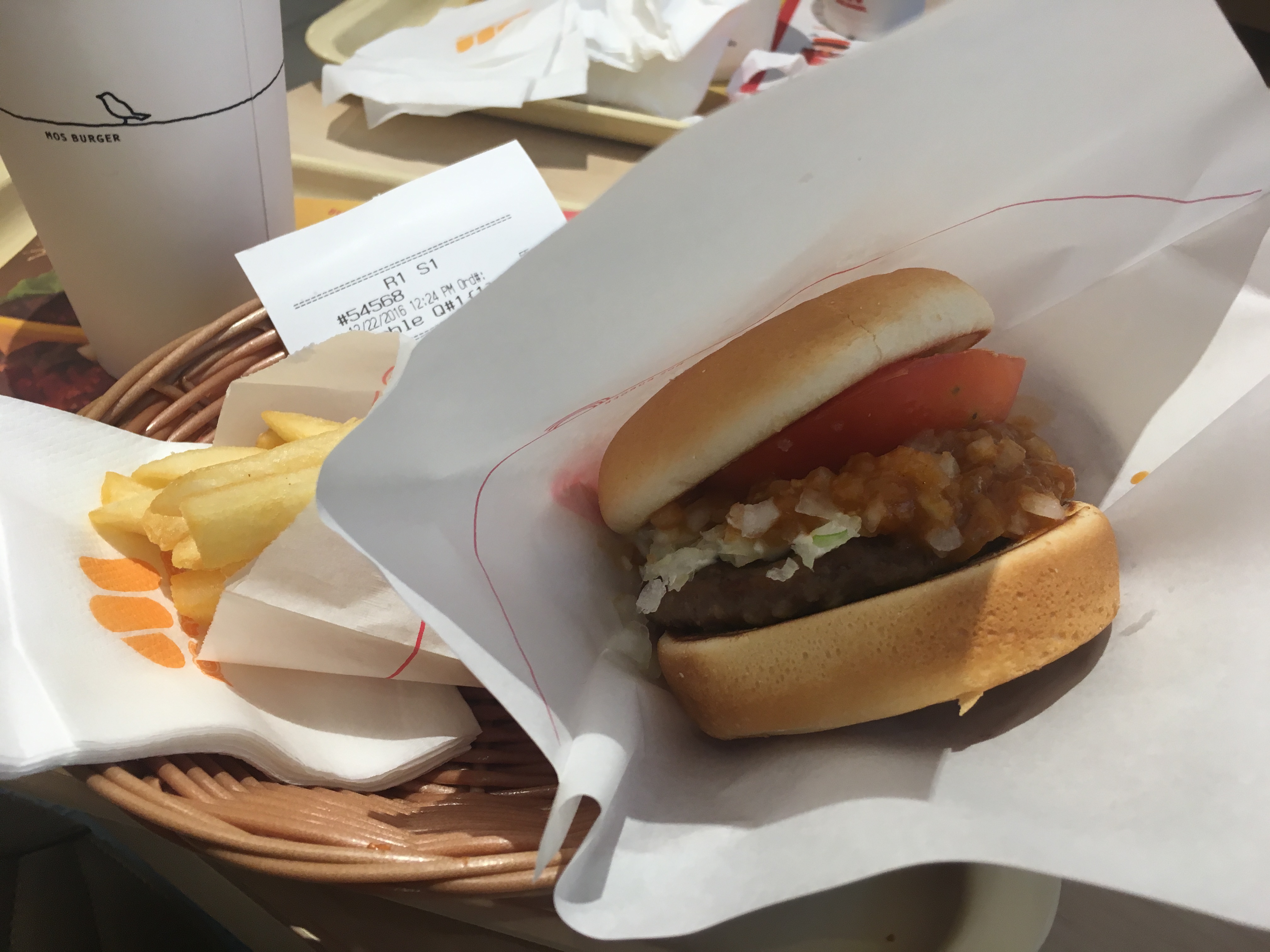 Fortunately, we had an uneventful train ride to Jurong East. It was a long ride from Yishun, and since it was well past rush hour, there were vacant seats available and I got to read a book on our way there. From the station, it’s an easy walk to the Science Centre. But wouldn’t you know it, it started drizzling the moment we got off the train. And a few minutes in, it turned into full on rain. Oh, the joys of vacationing in a tropical country. We explored JCube (the funny thing is there was also a Sephora in JCube, and it was another round of disappointment for another day), the mall beside the station, as the rain got stronger. I knew that even if we took the bus to Science Centre, we’d get soaked. So we decided to spend the day in the mall and just watch movies instead. It was my first time to encounter self-service ticketing for movies! You choose your movie, the show time, your seats, and simply tap your Mastercard on the machine for payment. They then print your tickets right out. So convenient, you guys. 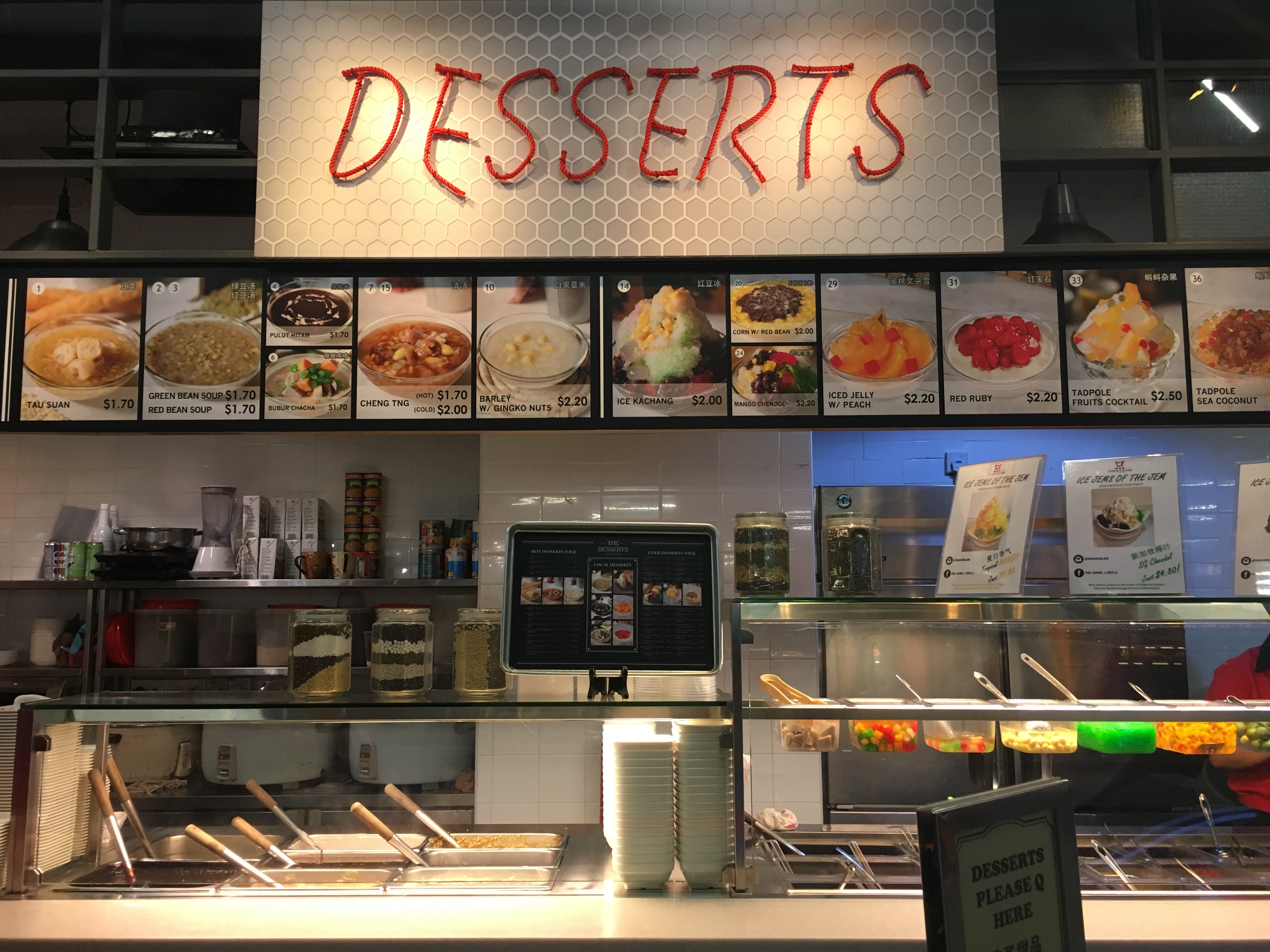 We had time to burn, so off to the food hall, we go. We had a variety of shaved ice desserts even though the weather has cooled down significantly due to the weather. I couldn’t be bothered to write down the names of each of our desserts, but mine came with a calamansi on the side. It was a bit unusual for dessert, but as they say, when life gives you calamansi, you squeeze it all over your dessert. 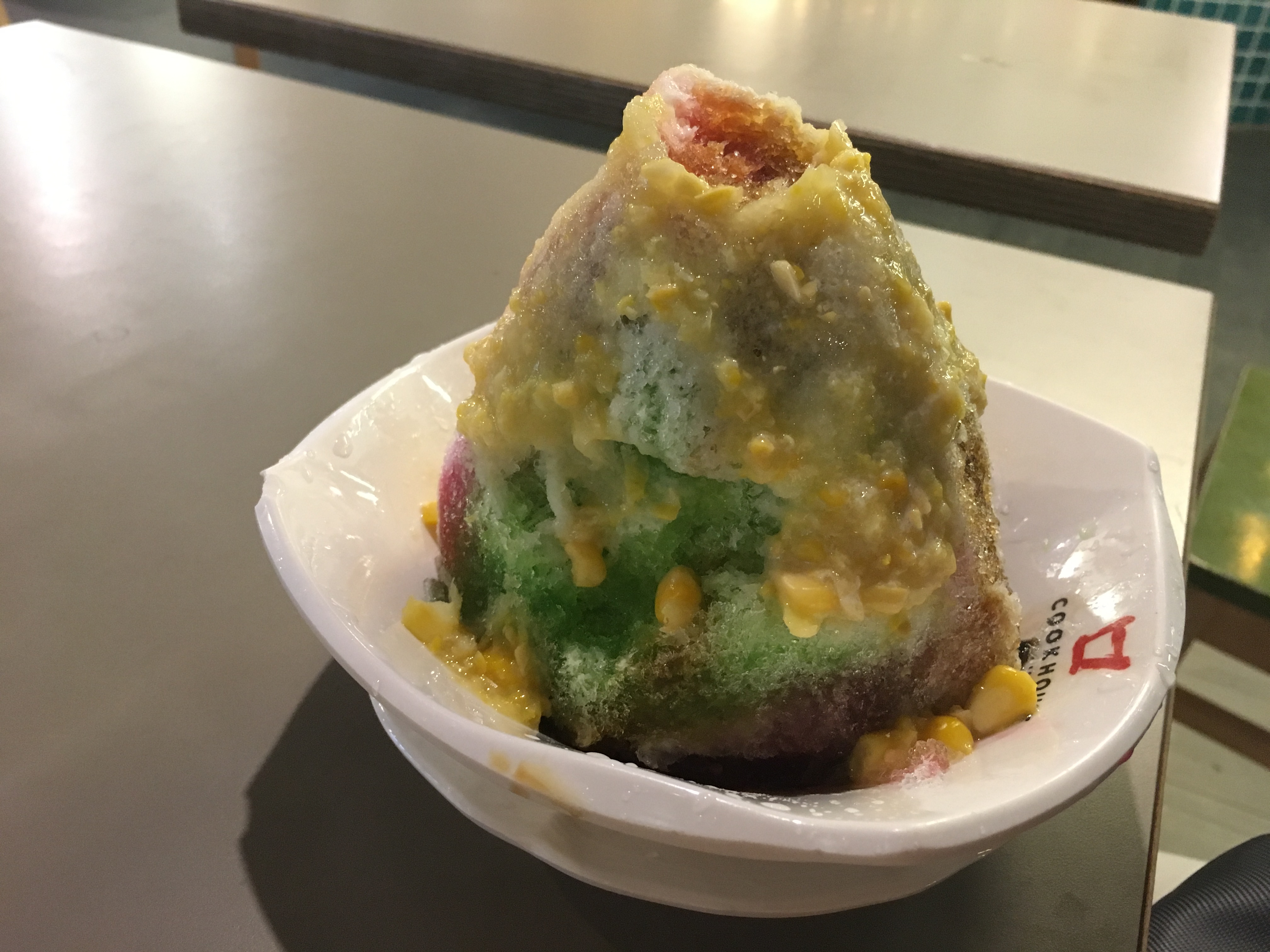 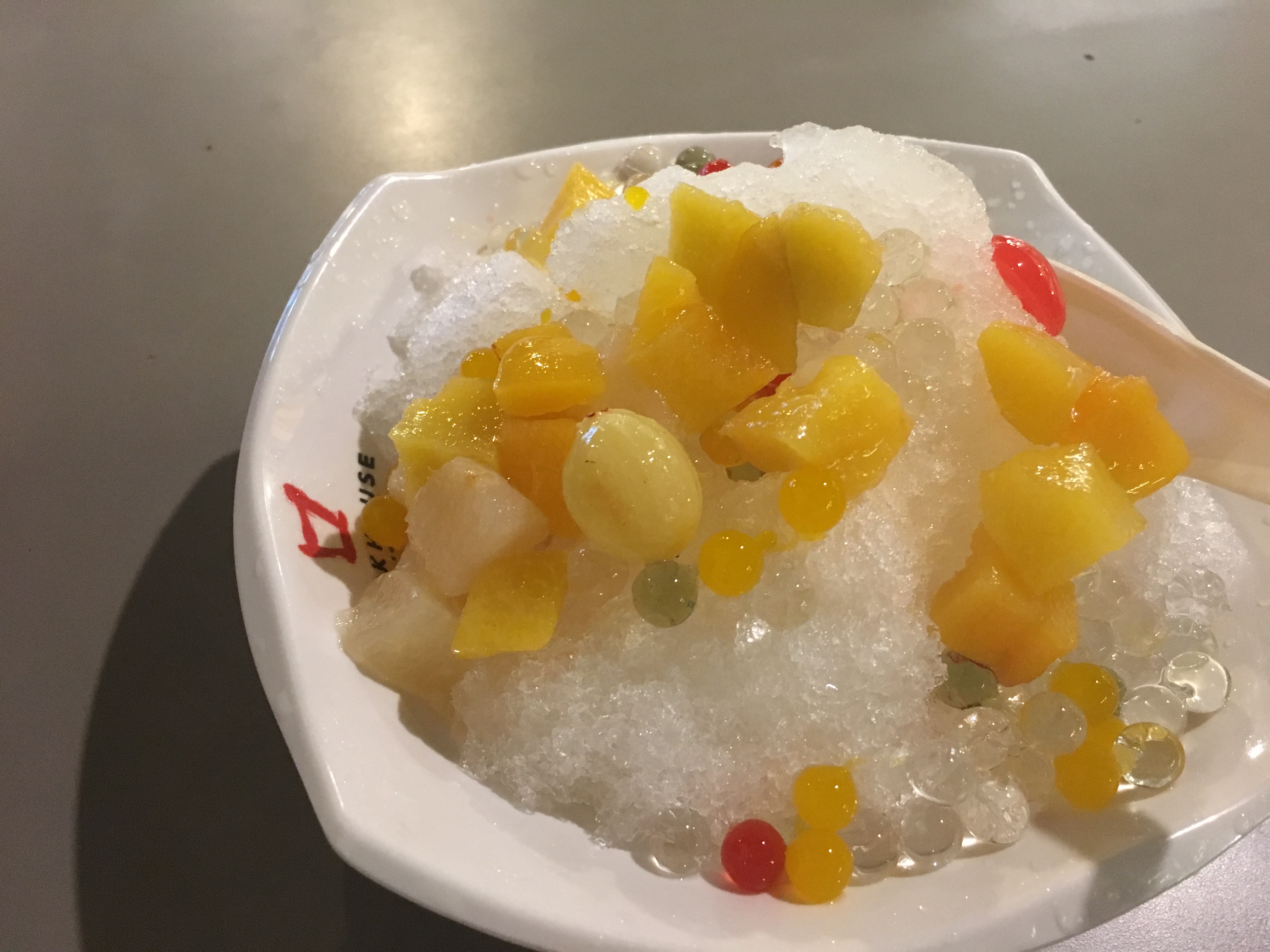 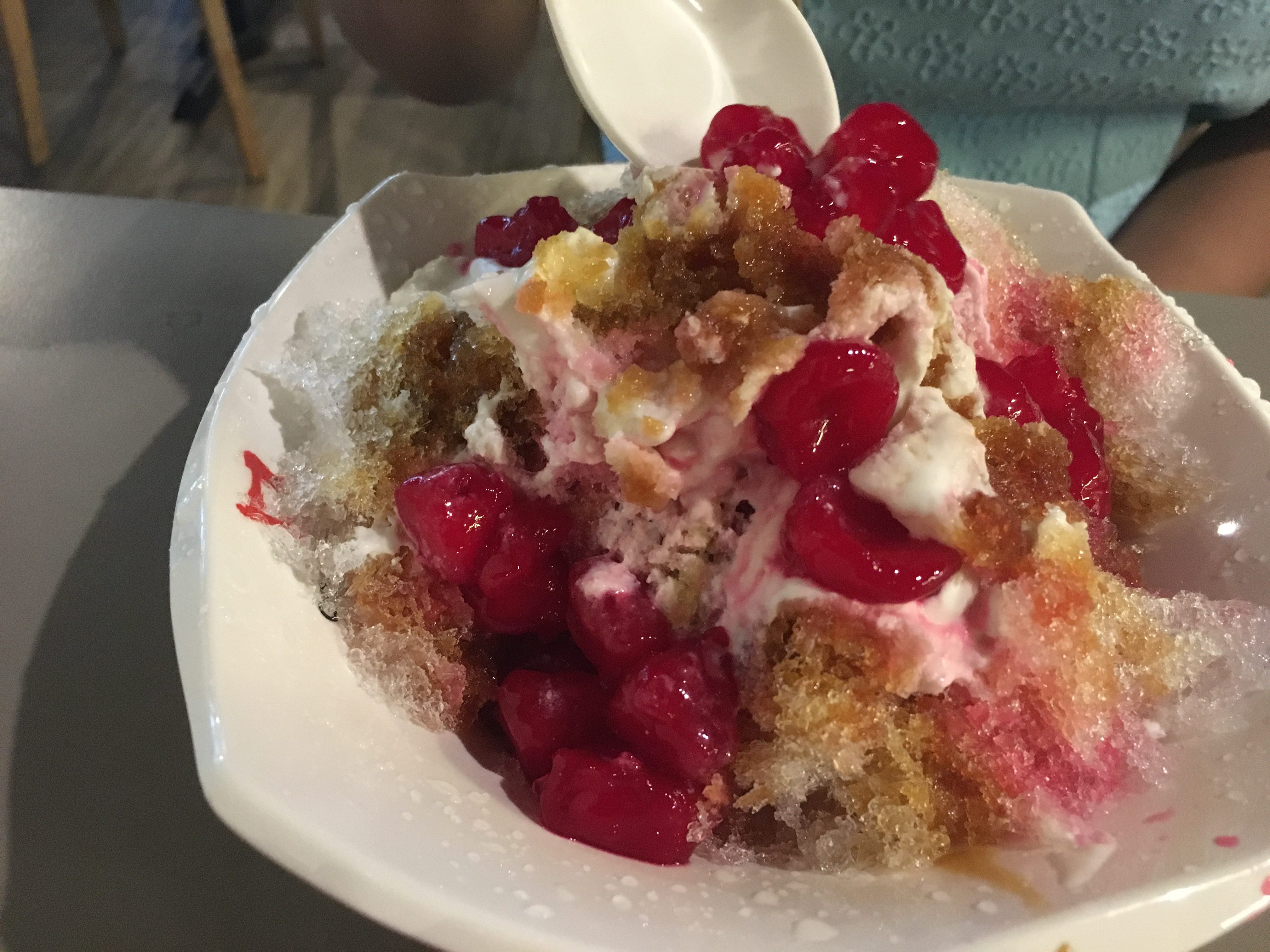 We got back to Yishun a bit earlier than usual. I saw Dofu inside the bus station and was intrigued by vegan ice cream. As you all know by now, I’m not a fitness enthusiast nor a very healthy eater, so vegan and ice cream was a combination that was new to me. Oh, I knew they existed, but I have not tried one yet. Dofu makes ice cream from tofu/soy, hence the name. I got the ‘Absolute’ which had soy pudding, soy ice cream, and toppings of your choice. I don’t know about you or where you came from but soy pudding is common all over Asia. Locally, we have taho. They also serve it hot in the streets of Vietnam with ginger syrup (I can’t pronounce nor spell the name they call it, so I won’t even attempt). Hong Kong also has douhua.

Since eating is prohibited inside buses in Singapore, and we don’t plan on tempting fate by doing so and hoping we don’t get caught, the unanimous decision was to walk back to dad’s apartment. The rain has stopped by then, and we only had to avoid puddles in the sidewalk while we made our way back. So, overall, it was a pretty chill day. 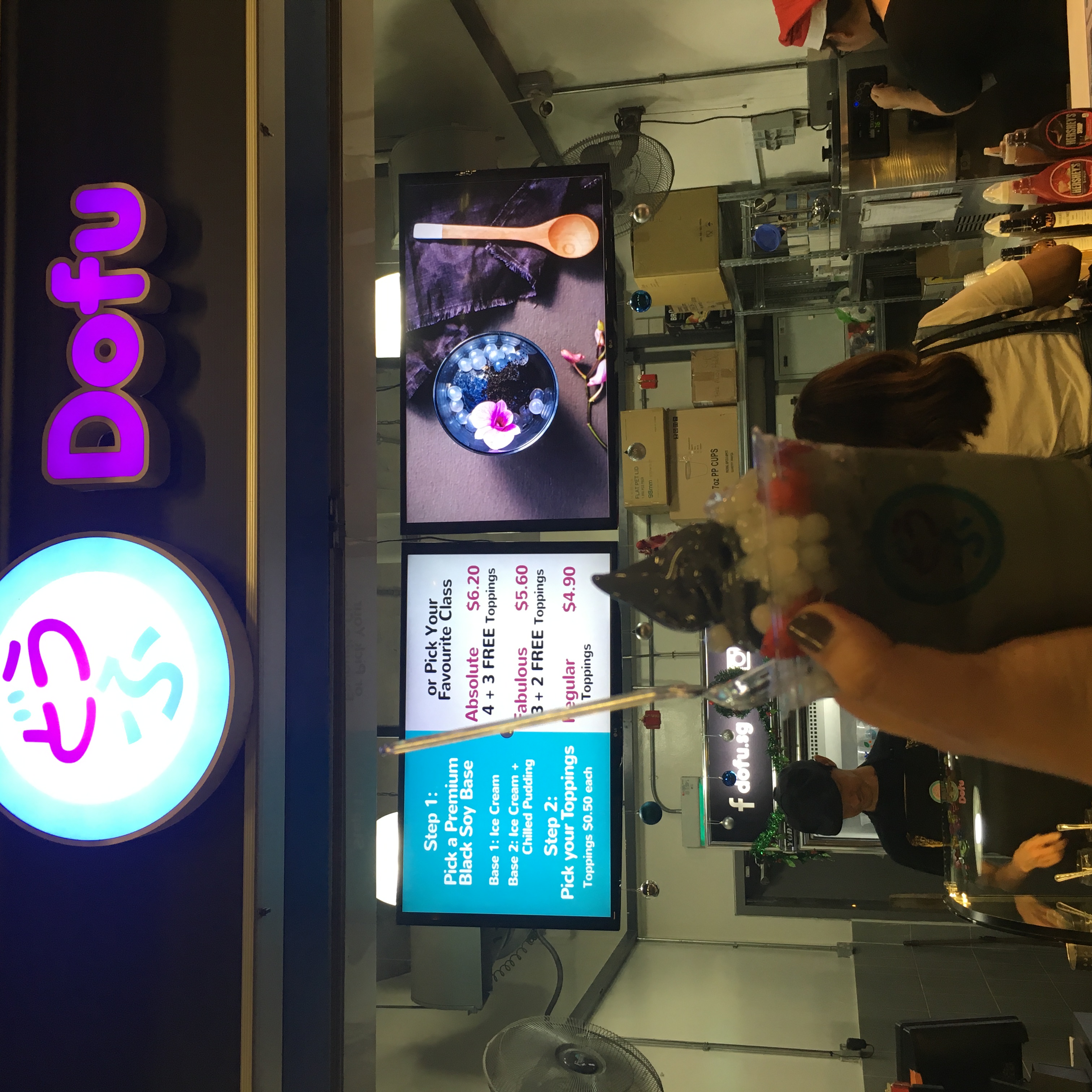 The following day was my sister’s birthday, and she had the option to choose where we spend the day. She picked Universal Studios Singapore. I usually try to avoid amusement parks like a plague on weekends and holidays, and that day was a combination of both. December is peak season for tourists all over, and we ended up spending more time queueing up than actually on the rides. 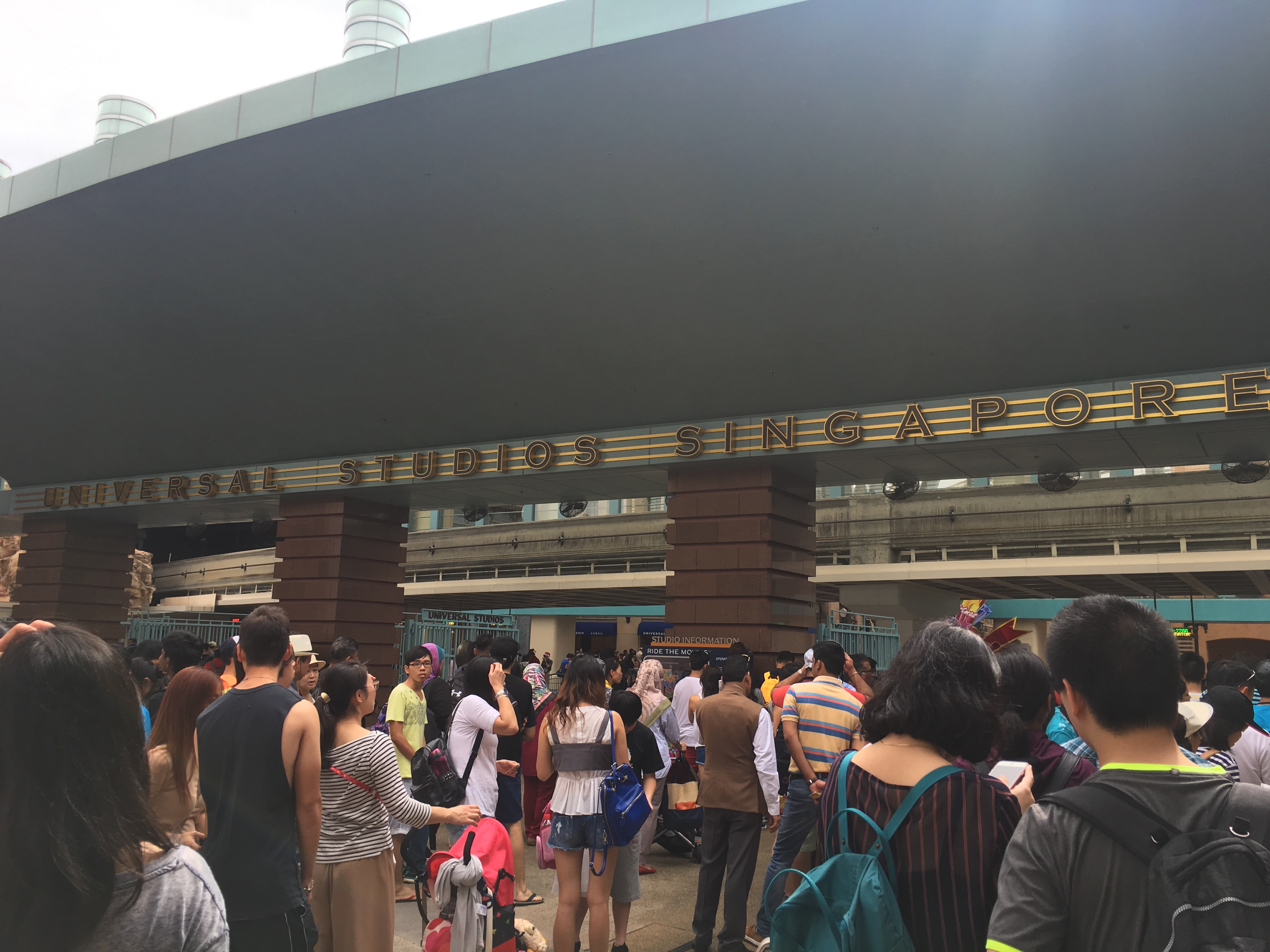 The place was packed! I’m not the biggest fan of crowds, heck, let me correct that and say the truth. I hate crowds. I don’t like strangers invading my personal space, and we need to have a certain level of relationship for me to feel comfortable with any kind of contact. That day, I was literally rubbing elbows with strangers and it was unavoidable to bump into someone. Many someones. Add the fact that the weather was hot and humid, and everyone was sweating buckets. /shivers 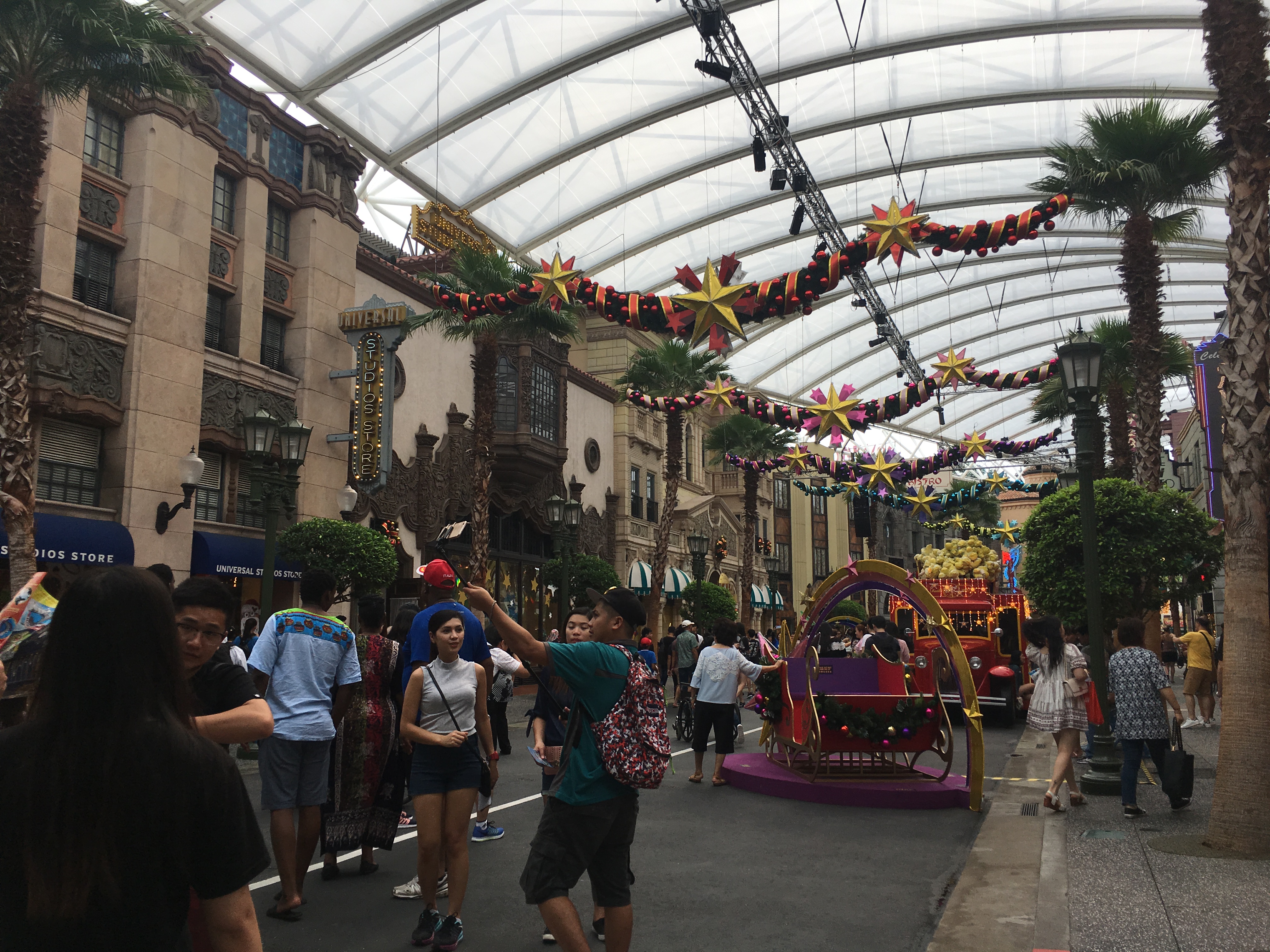 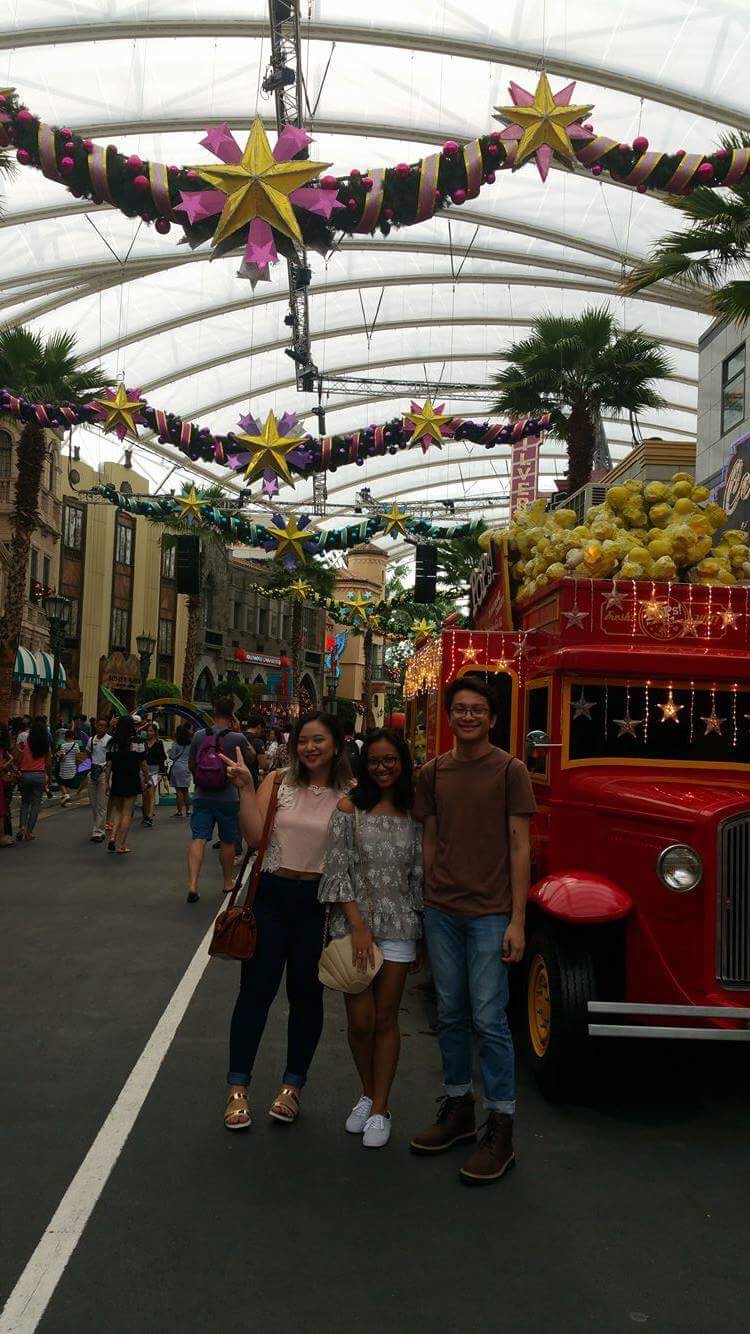 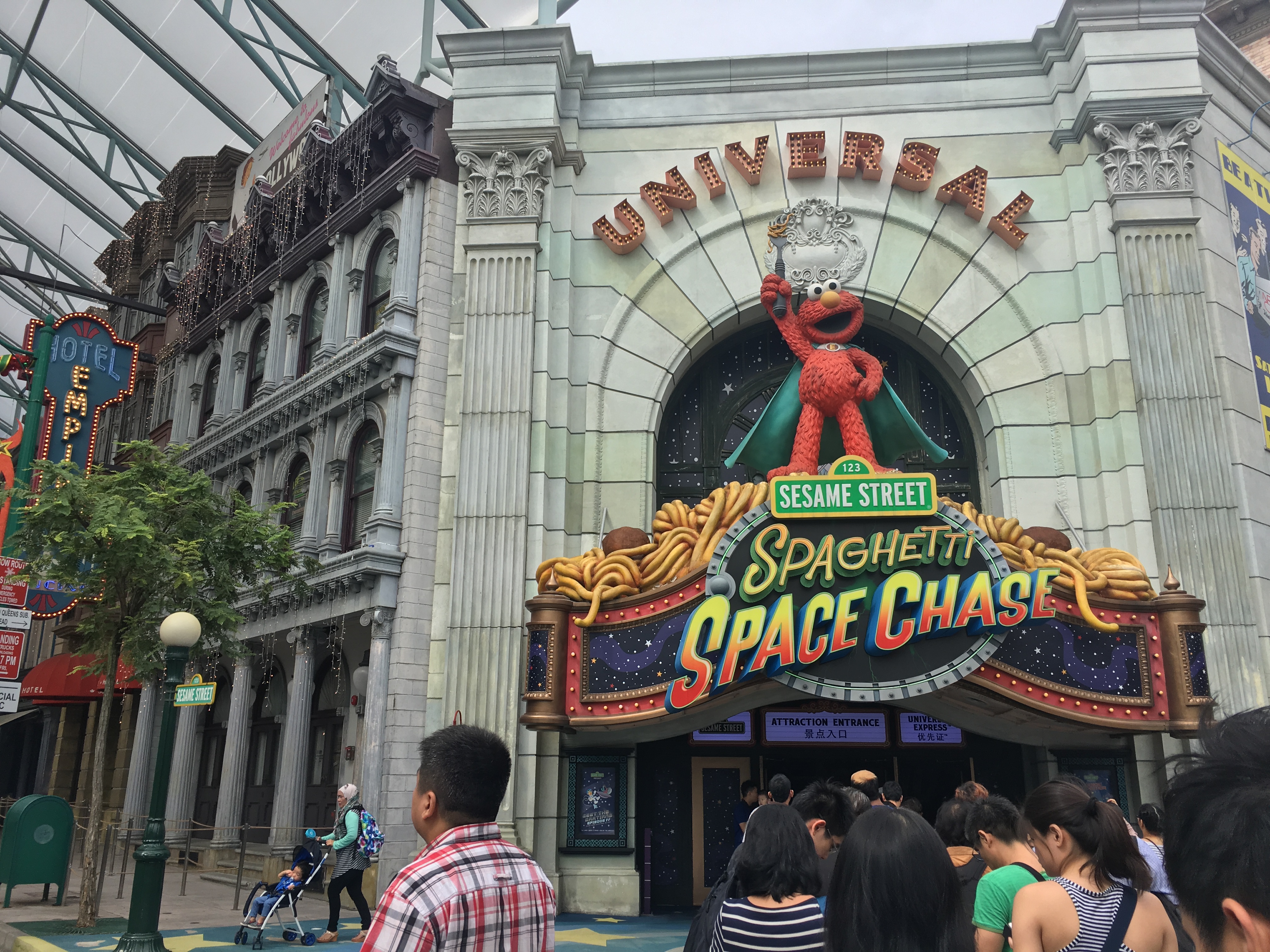 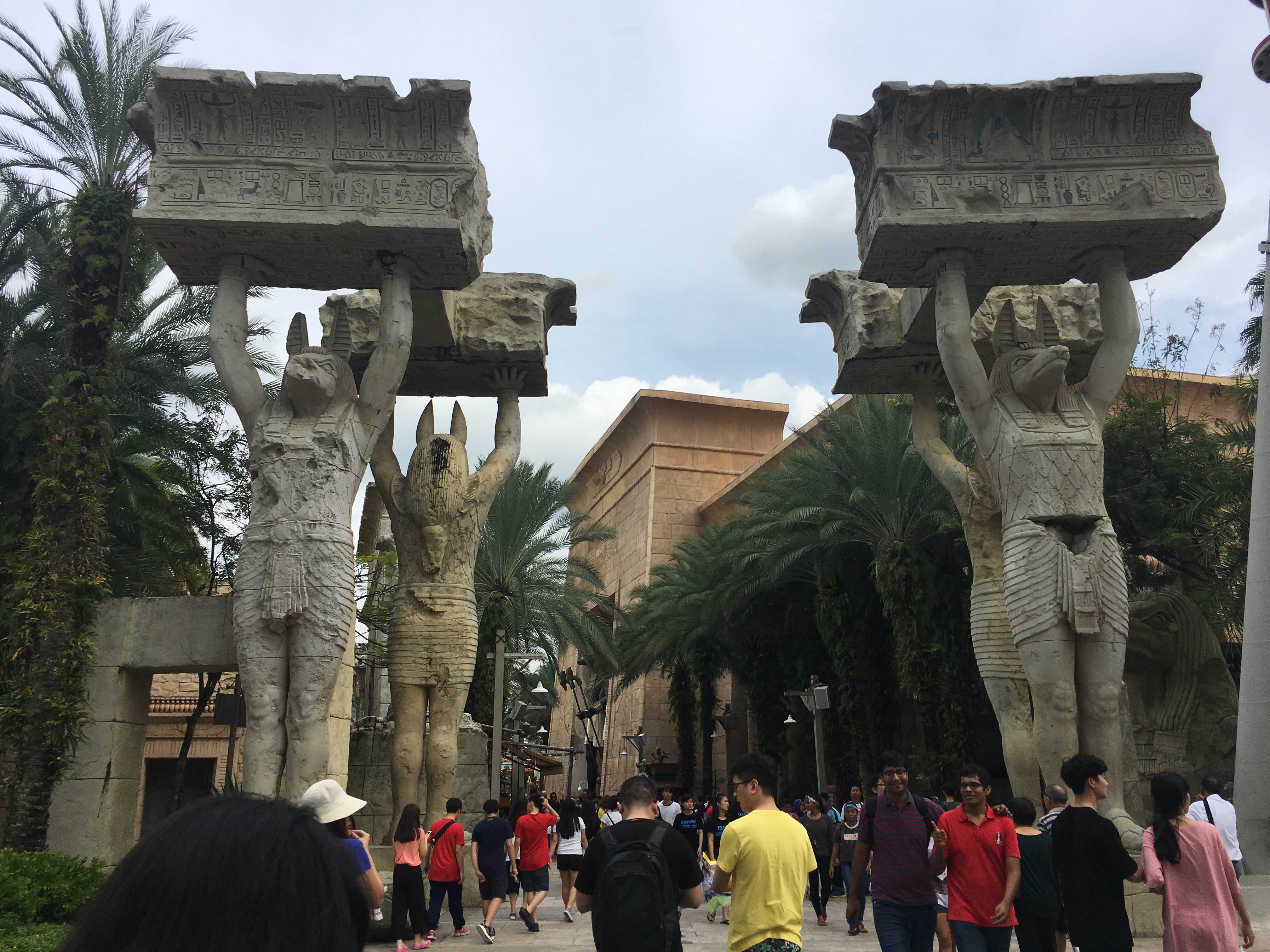 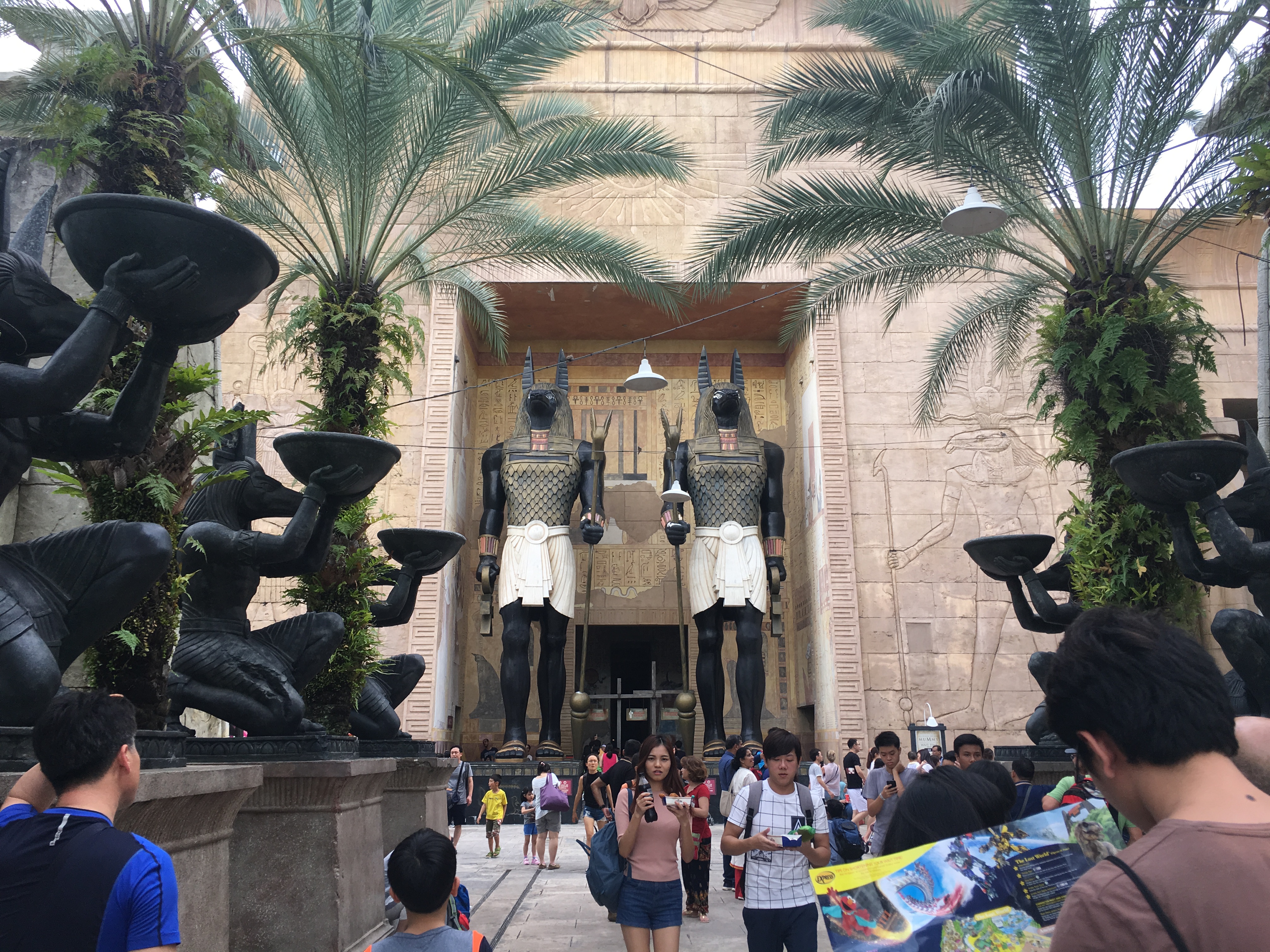 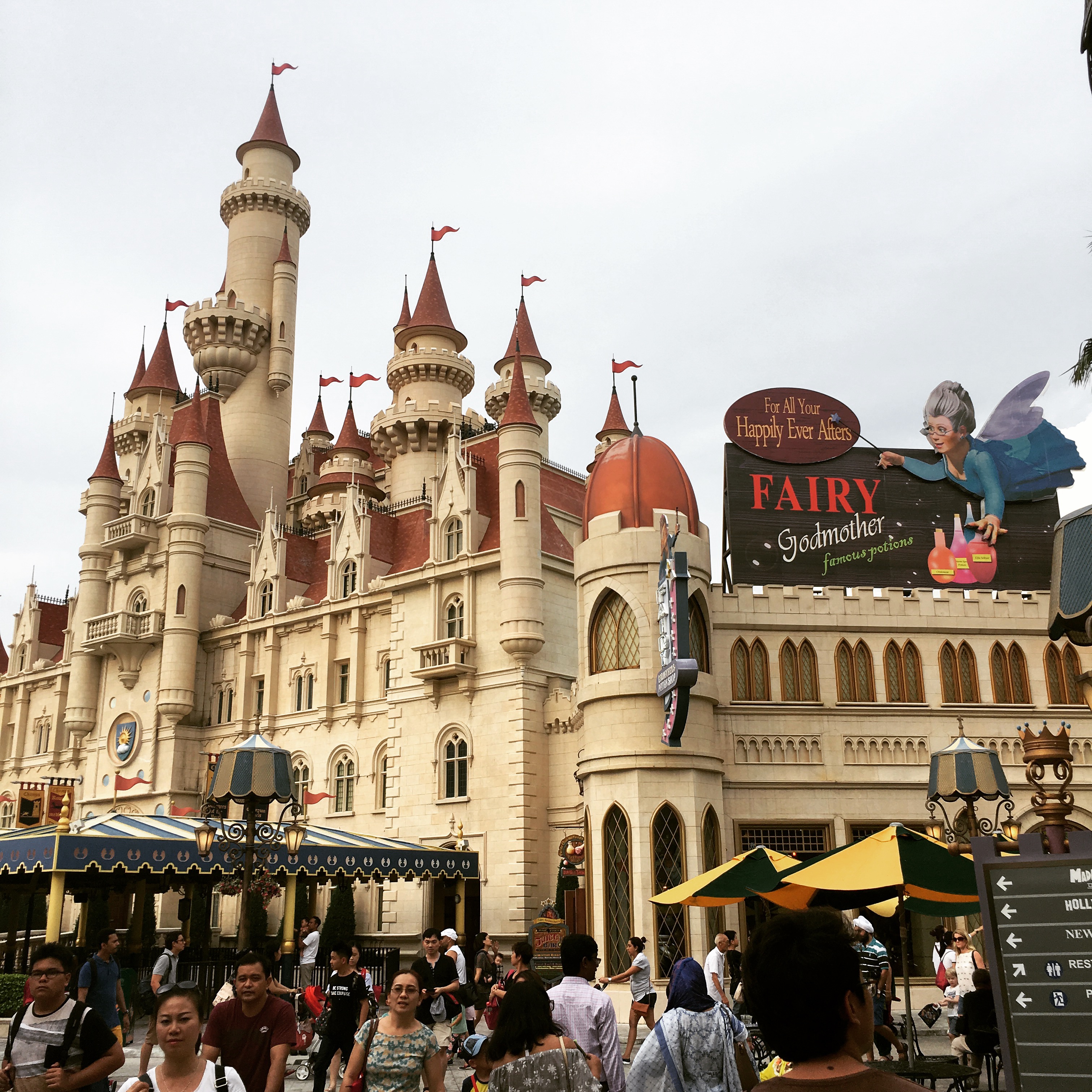 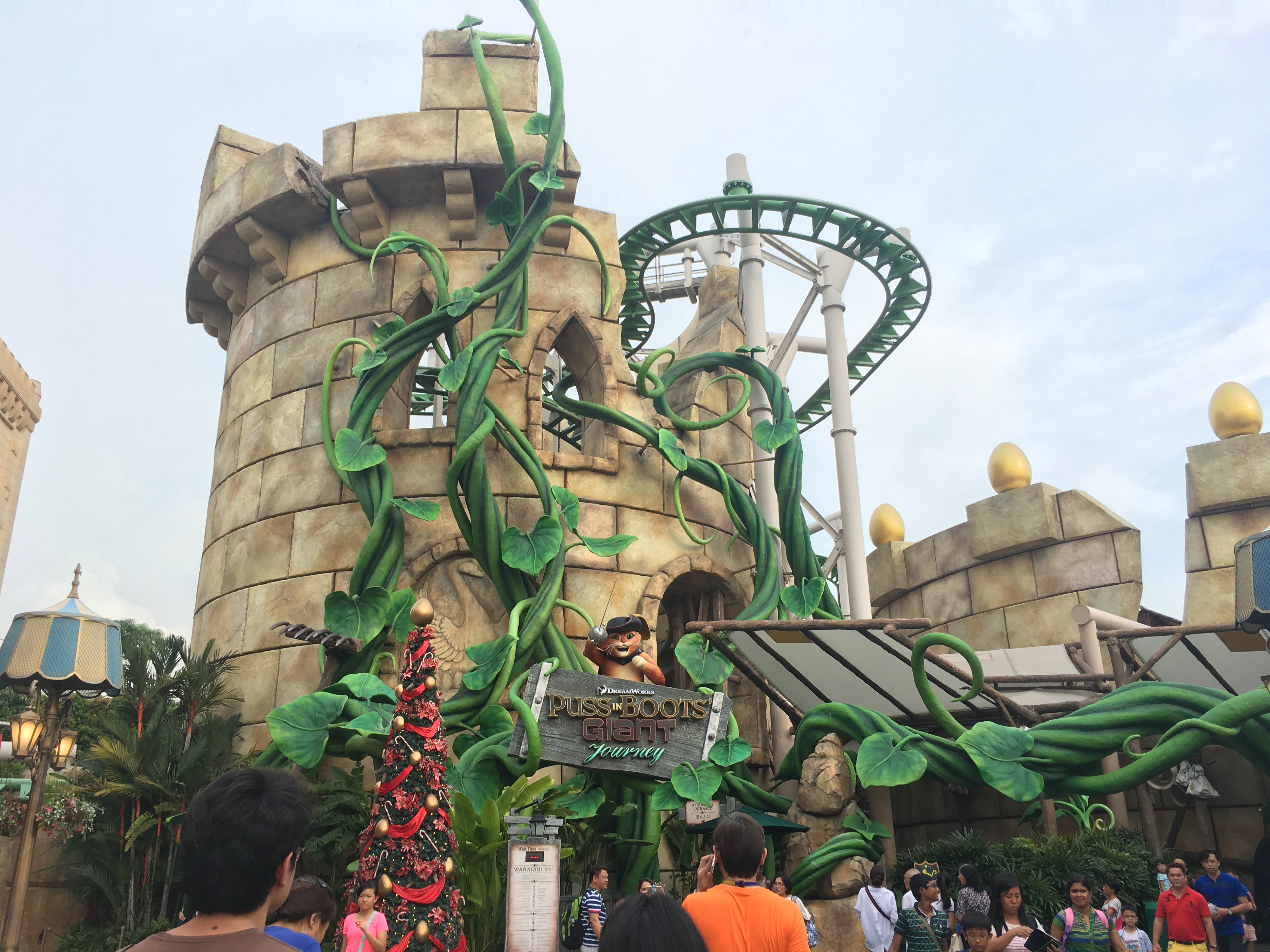 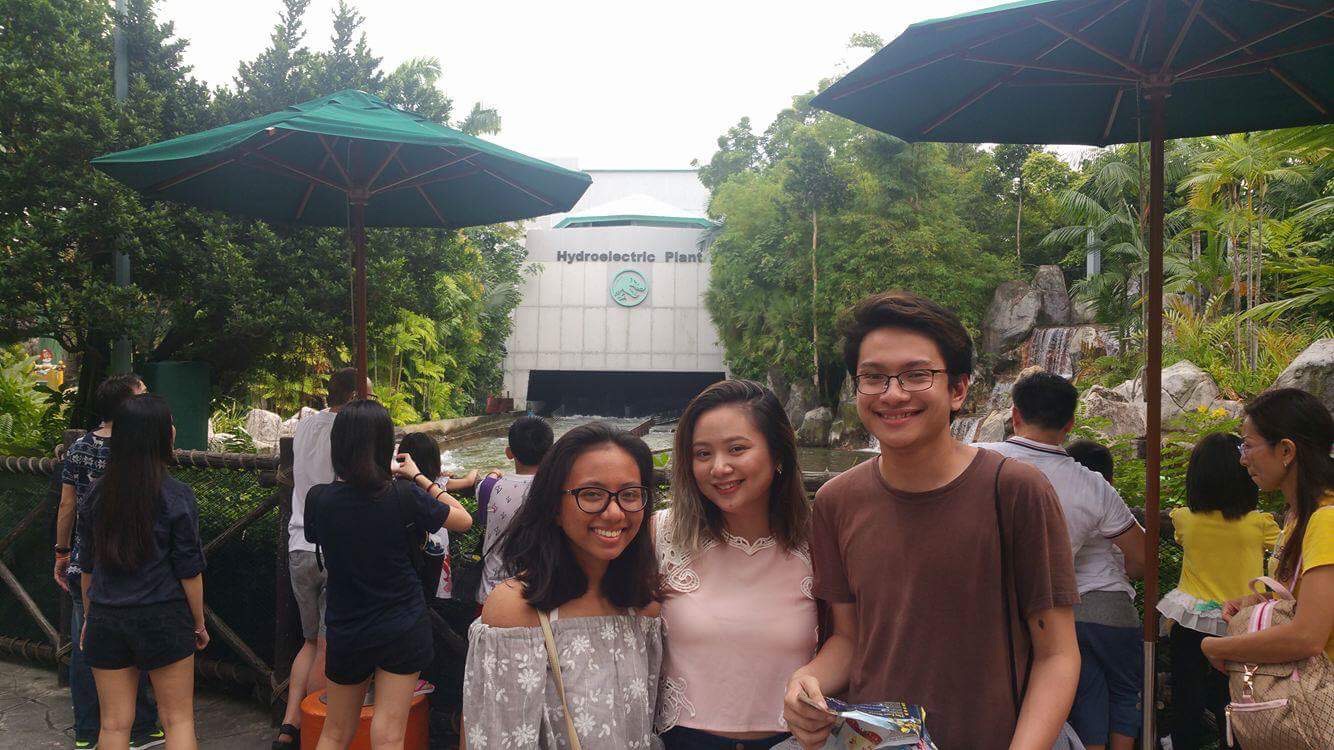 For the first time ever, the Battlestar Galactica ride was open. I’ve been to Singapore a couple of times ever since the amusement park opened, and every single time, it was ‘under maintenance’. The queue for both rides (Human and Alien), were around 90 minutes each. I like the Alien track better because it was the one with the loop, but the Human track was fantastic if you don’t sit in the middle because it felt like you were hanging from the edges. Before you ask, the answer is yes, I am a little bit of an adrenaline junkie. 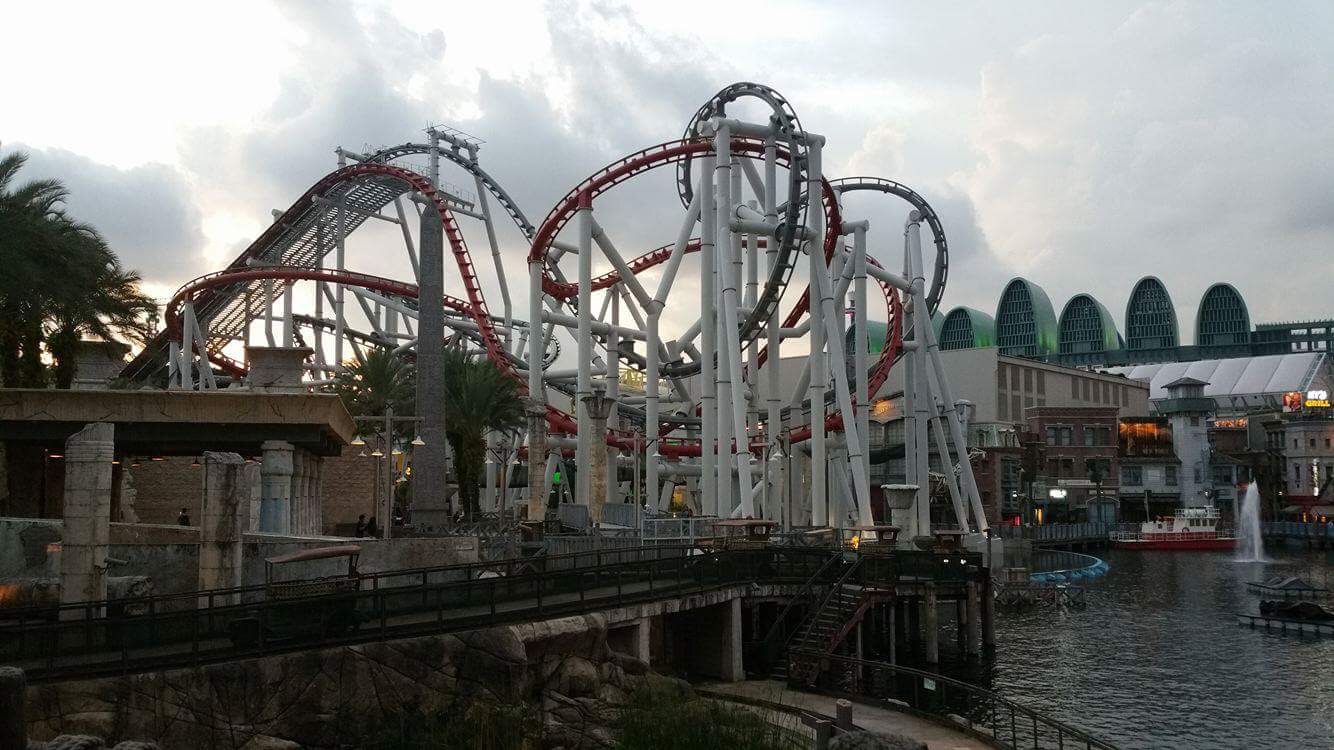 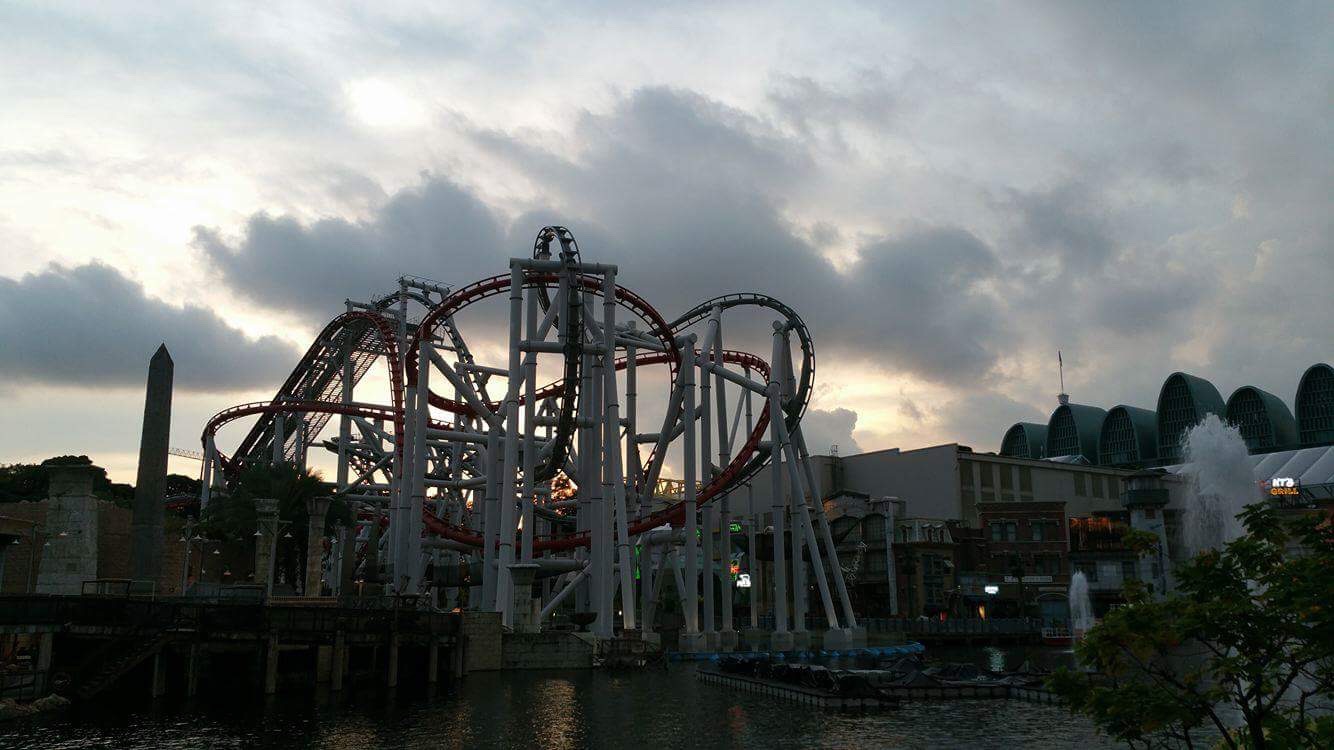 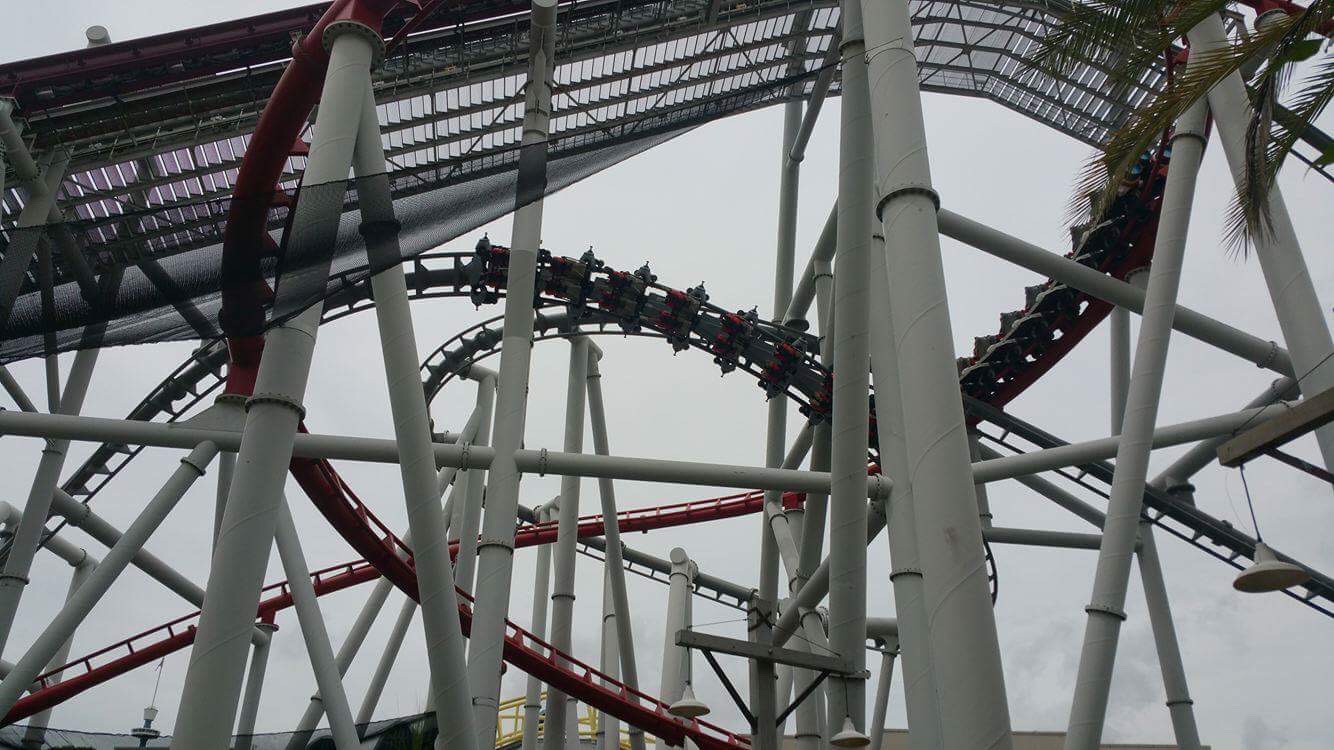 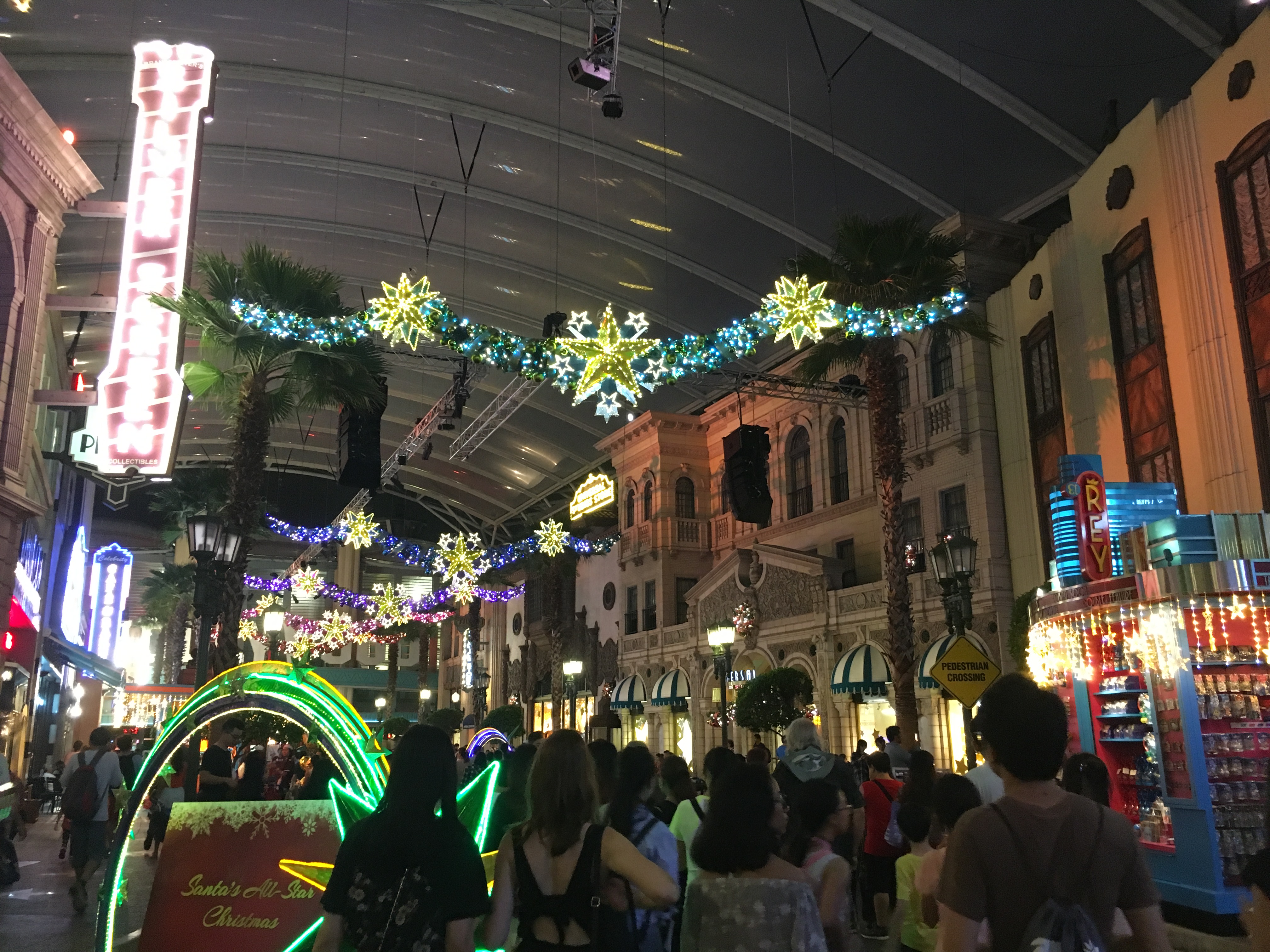 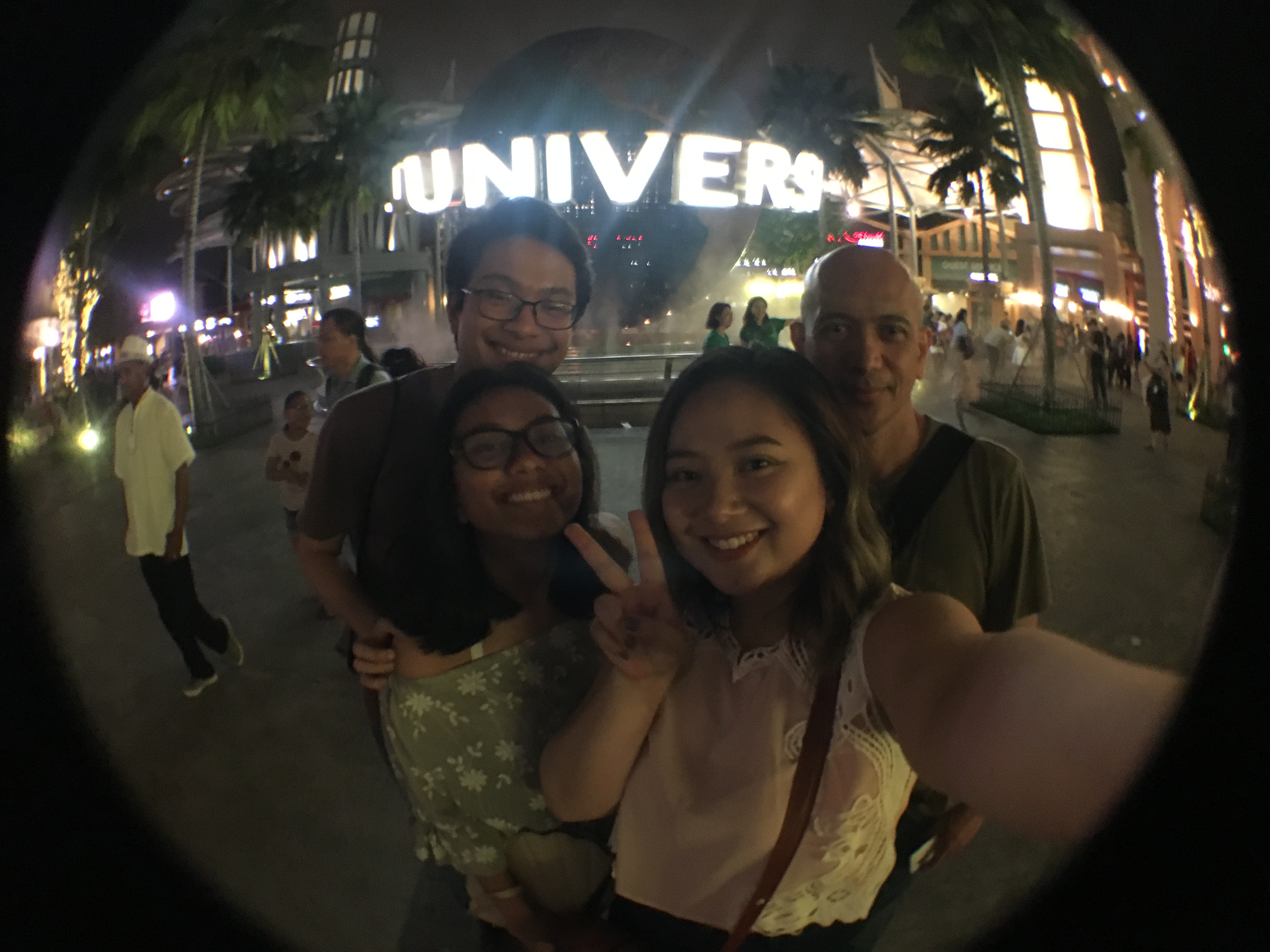 We had dinner at Vivo City after, in the hopes of letting the rush pass before heading back to the apartment. The sister is a big fan of chicken (she and chicken boy gets along when it comes to food), so dad made this huge order of chicken wings. We also had satay (leftmost part of the photo), carrot cake (rightmost part), and I forgot what the wrap was called. The carrot cake that did not resemble anything like the carrot cake I’m accustomed to (you know, the one covered in cream cheese), was surprisingly tasty. My brother and I emptied the plate in a jiffy. I also enjoyed the peanut sauce that came with the satay. Now I’m craving for peanut sauce to pour over my steaming white rice. Typical me. 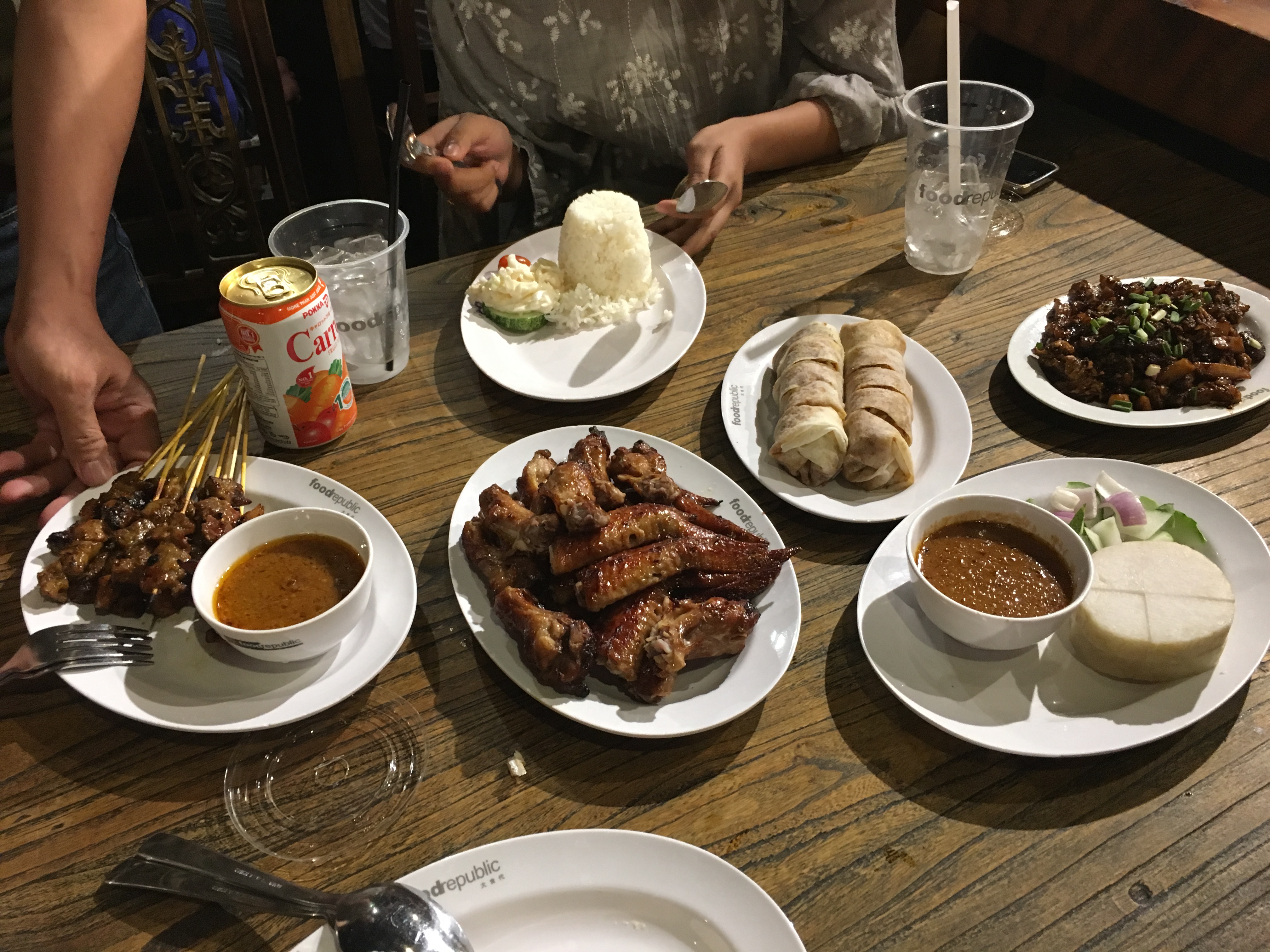