Writing about our most recent trip to Singapore has led me to a path of reminiscing the past. Singapore was the destination of the first international flight I got on to. And since then, I have flown to the Lion City in a variety of circumstances. While most of the trips were to spend time with family, it was also the land of many of my firsts. My first international trip without my parents was to Singapore as a college student. When I started earning my own money, I spent my first birthday away from home, and our first international couple trip, by flying there. Even though I have set foot in Singaporean soil more times than I could remember, I find that there still is somewhere I haven’t gone to. Can you believe that from all the summers we spent lounging around in my dad’s apartment, we have actually never been to Holland Village?

The initial plan for the day was to have breakfast in Holland Village. I don’t know why, but places that have the word ‘village’ in it always feel like a good place for a cafe that serves great breakfast. However, as usual, we woke up late and we took (at ‘we’, it’s mostly me) ages to prepare for the day that we ended up having brunch over at Gelare near Yishun station. When I placed my order, the serving seemed small and light. Summary: I was wrong in thinking that. 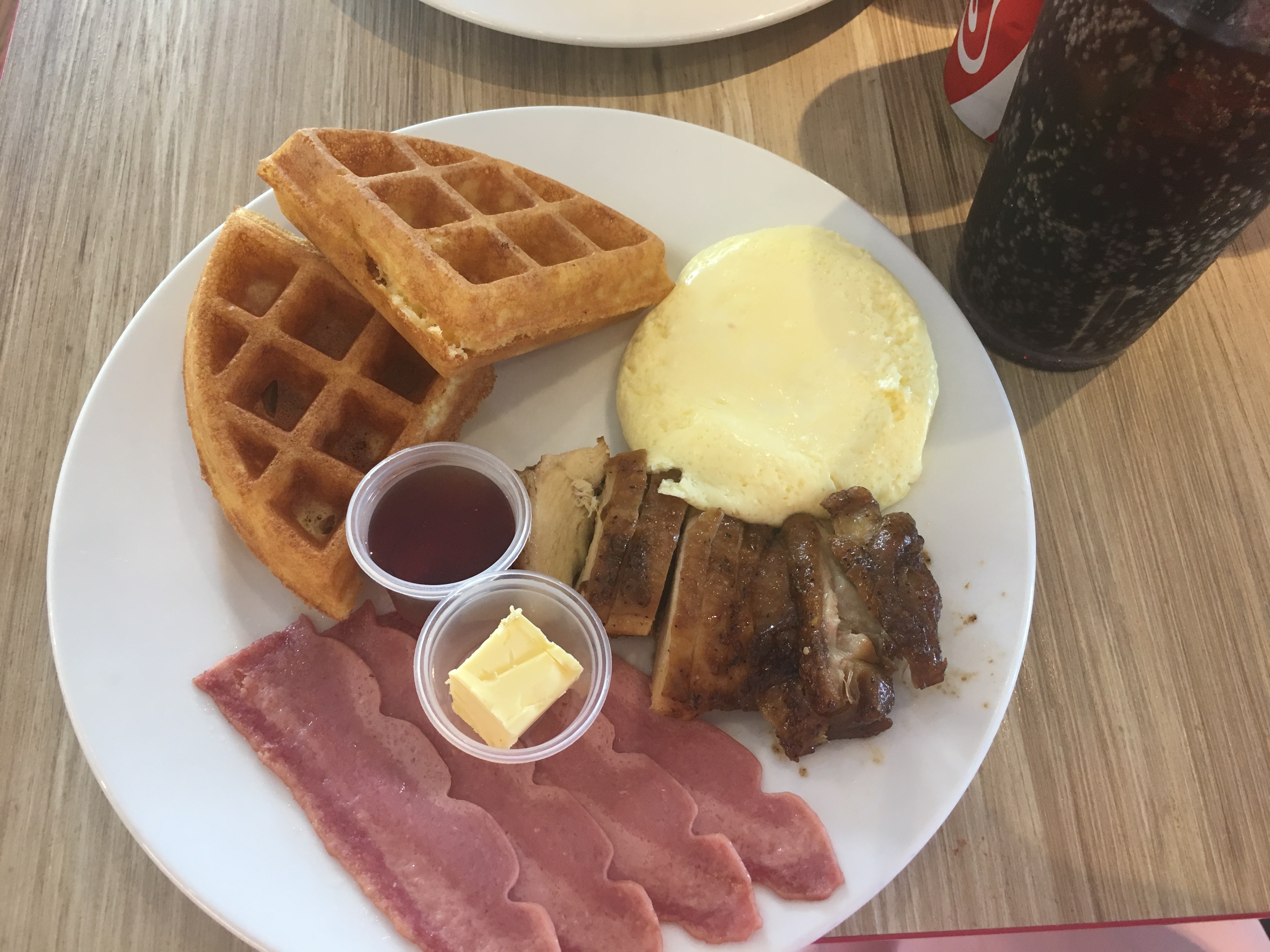 Since we were all full even after the short walk to the train station, we decided against having another meal at Holland Village and have desserts instead. It was pretty helpful to have the place with their own station, as we only needed to consult the map to make sure we end up in the right place. This is a common theme all throughout Singapore that using public transportation is super convenient. 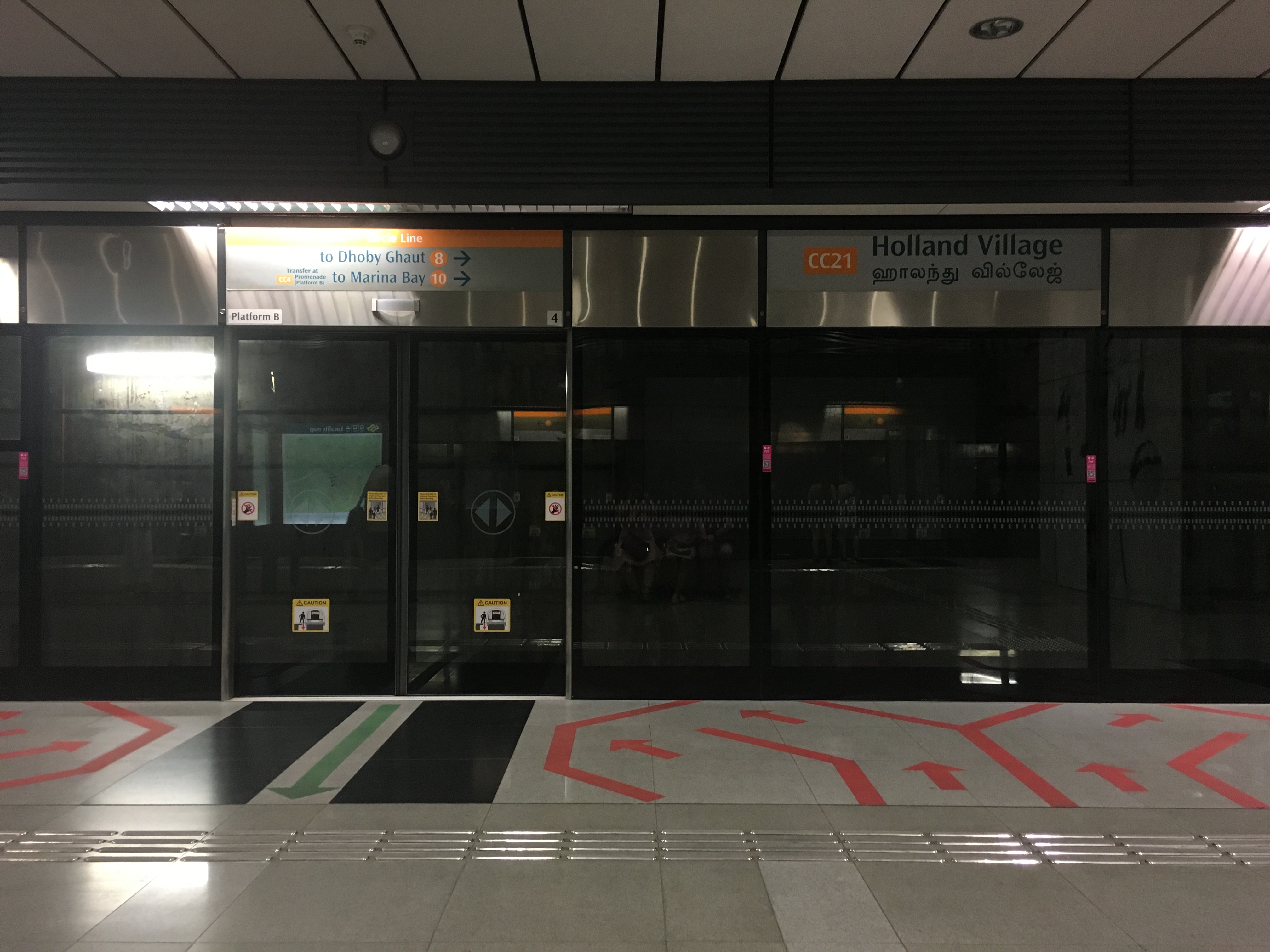 To be completely honest, I did not do any research on Holland Village to check whether it has quirky stores we could visit, or cafes we must eat in. When we got there, we found out that it’s filled with mostly dining establishments. We roamed around to find a place that seemed to have desserts. It was a little past noon so there was not a lot of diners on the street. We came during an off-peak hour and tourists were a bit scarce. 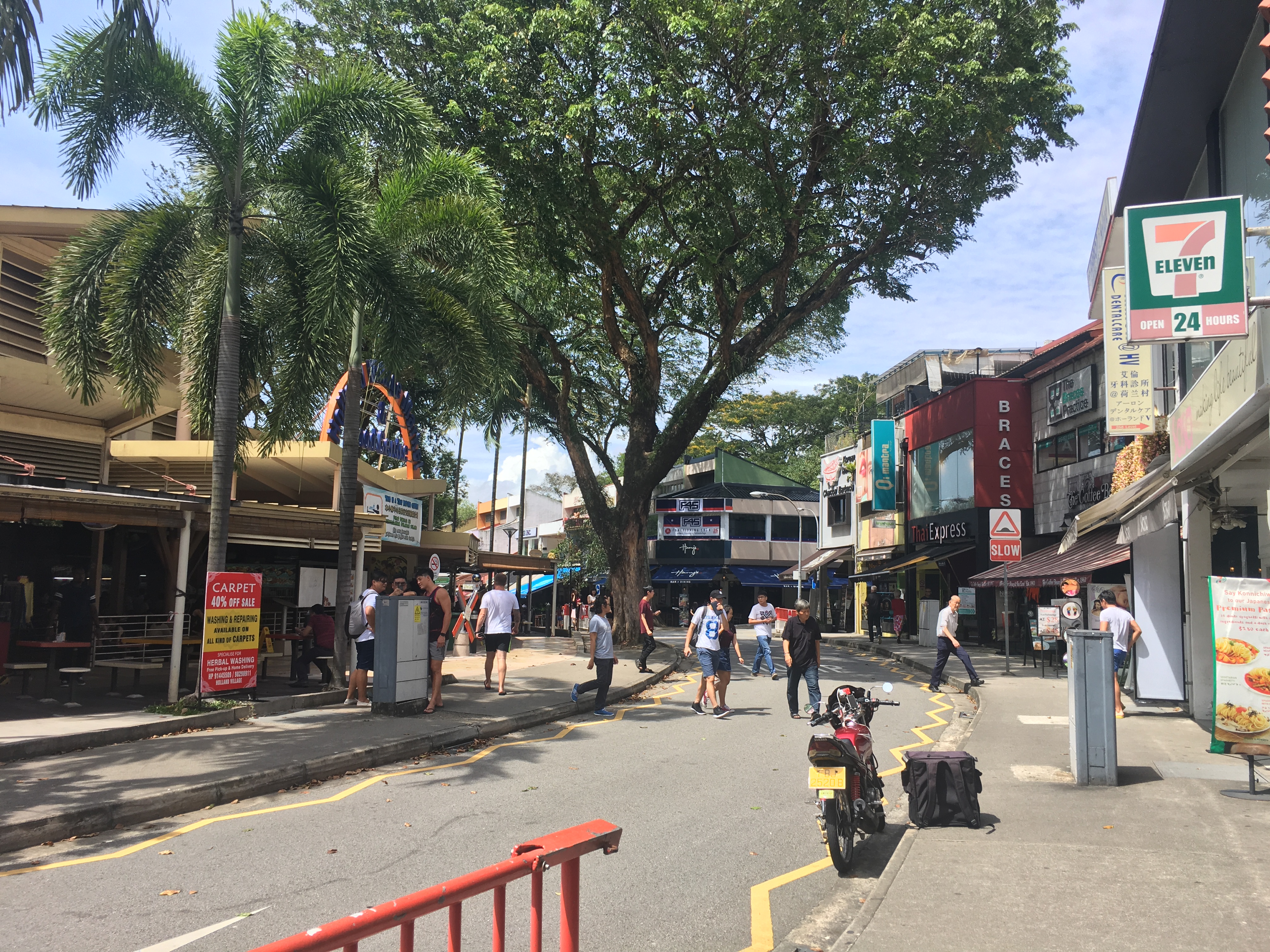 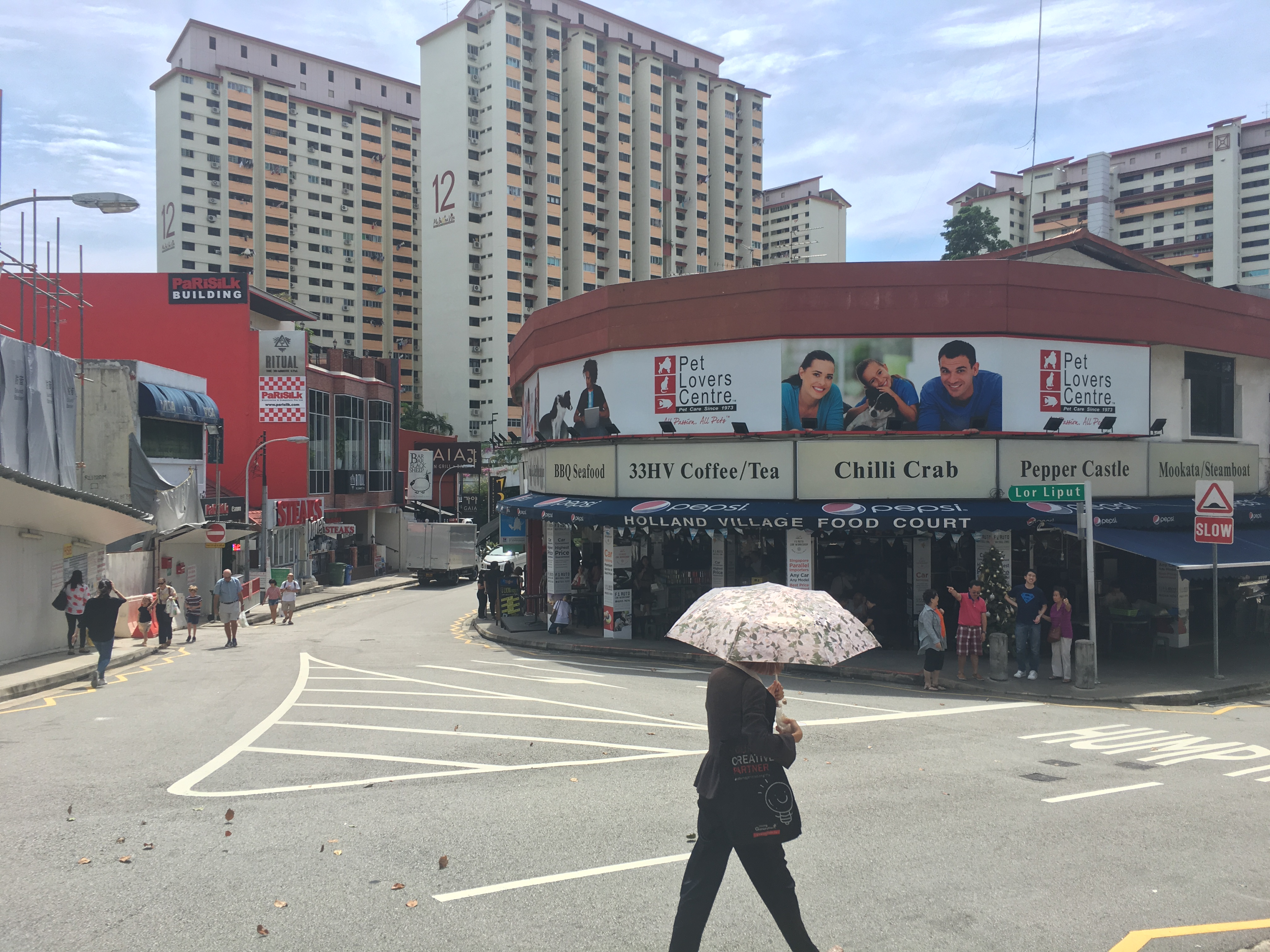 We found Project Acai and was immediately interested by their ‘superfood bowls’. I am no fitness enthusiast but that sounded like something healthy. The photo they had on their stand outside though did not seem like your usual salad (yes, I stereotype healthy food) and that convinced us to go in. 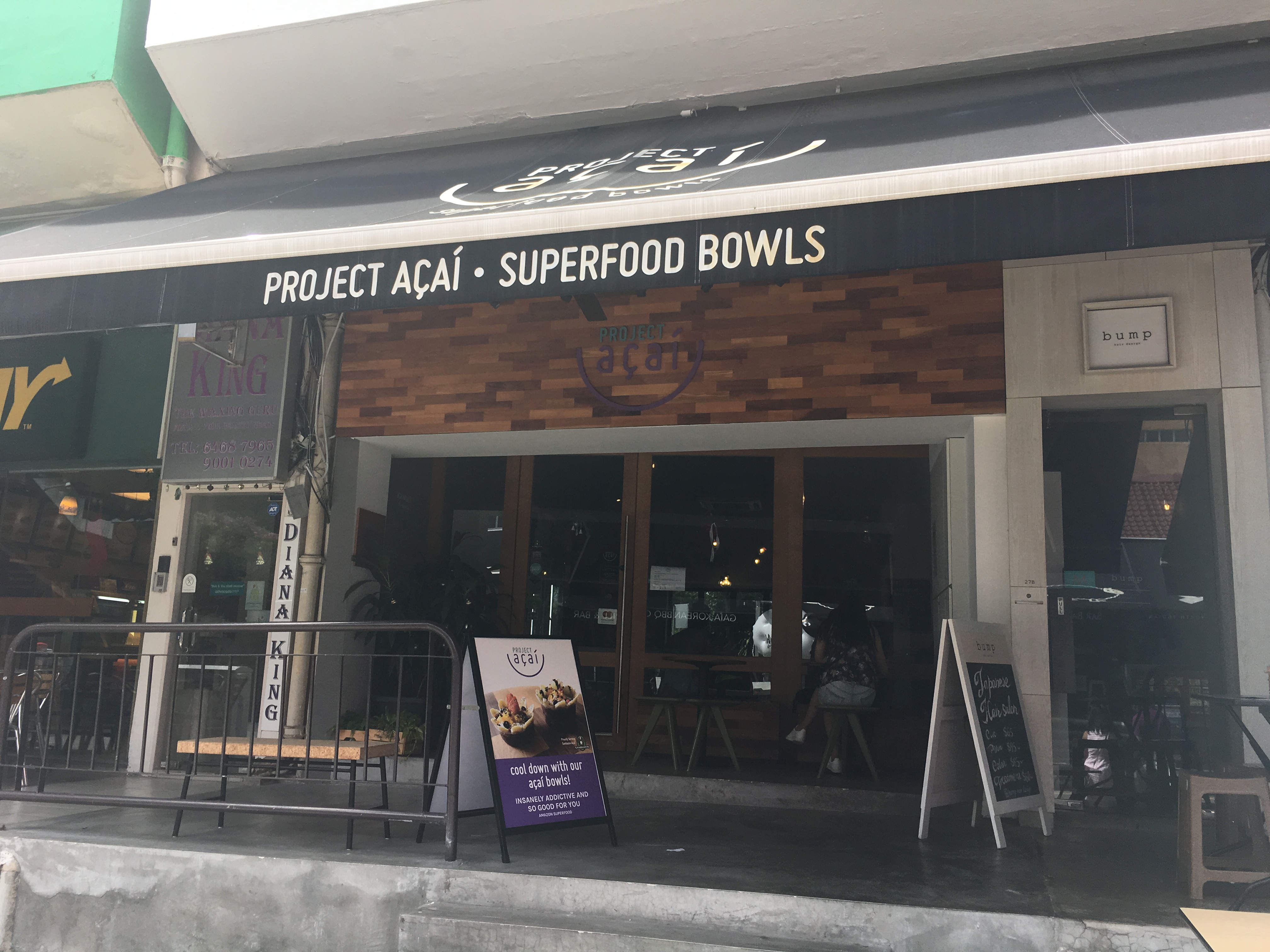 Their interior would be best described as cozy minimalist. I wouldn’t really know, I have little knowledge of interior design. I did like the look of their high ceiling, hanging light bulbs, and wooden furniture. Although I’m still confused about their tables – it was attached to the wall but you can slightly move it but it will instantly go back to its original position. The counter was manned by a three-women team, and they were friendly enough to explain what goes on to each bowl even though you can also read it from their menu. 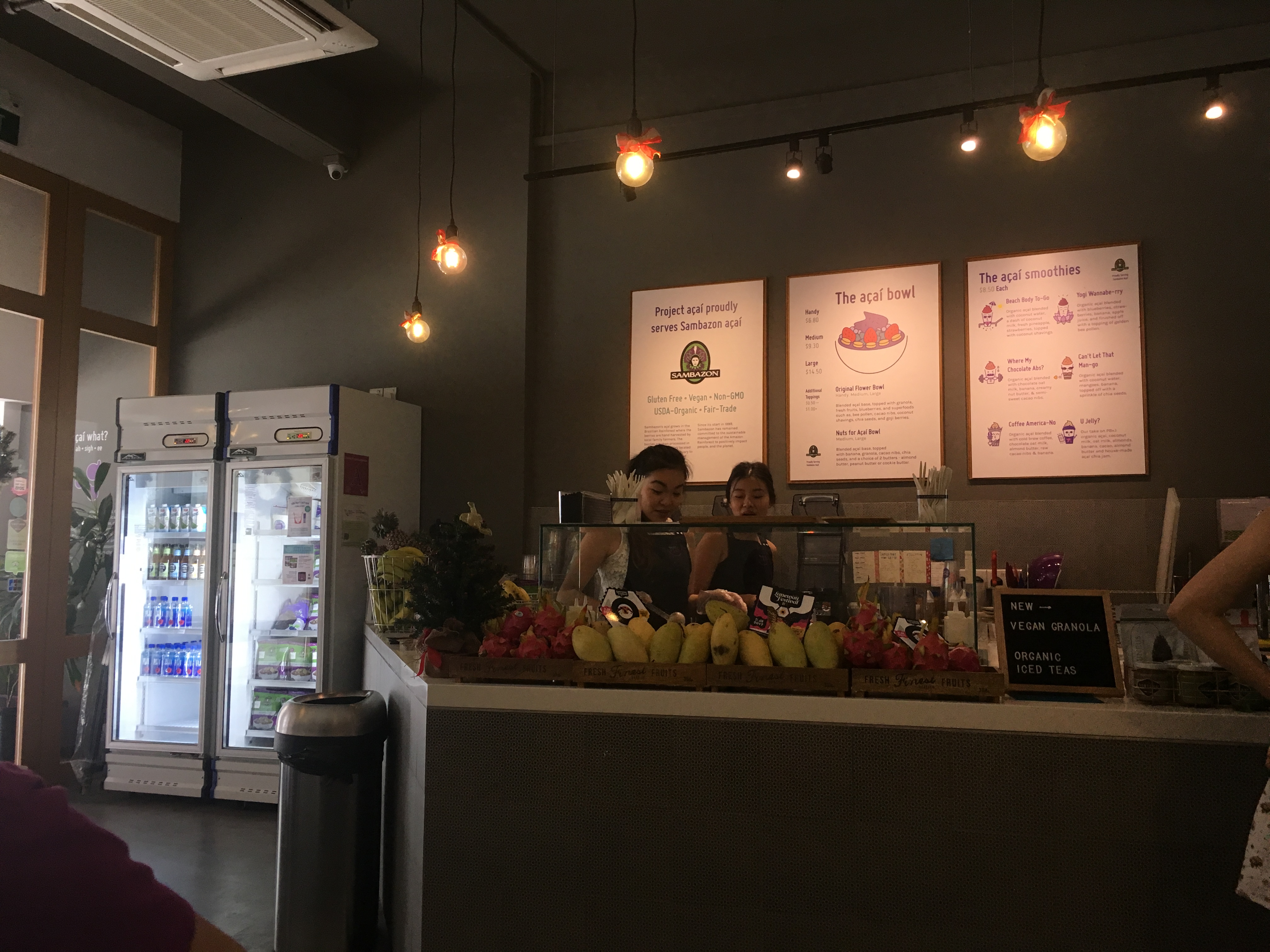 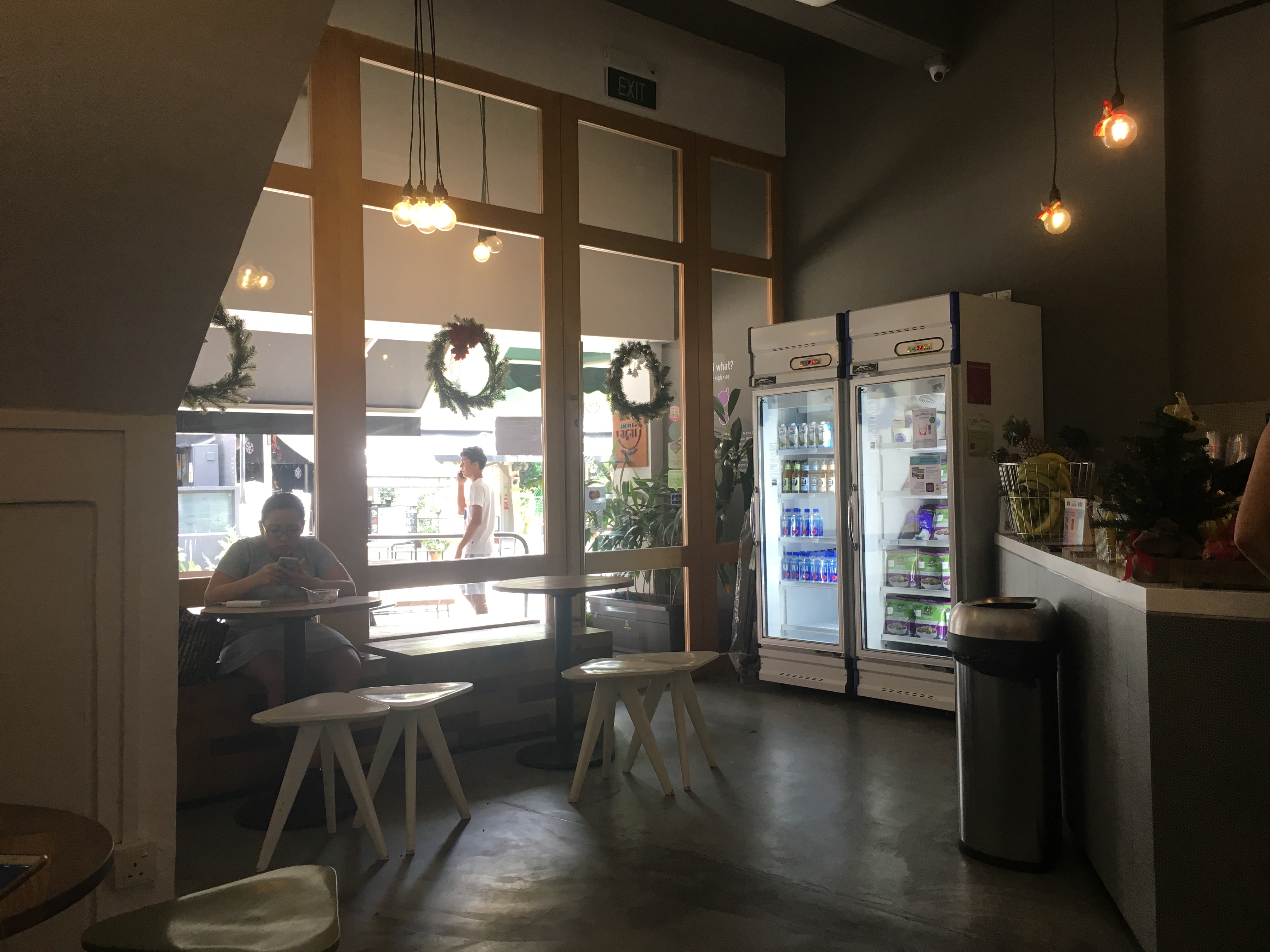 My brother and I both had their original flavor acai bowl, while my sister had their chocolate smoothie. Everything had acai in it, and frankly, I didn’t even know what an acai was before this. Apparently, acai is a berry and the acai bowl’s base is a thick smoothie (with icecream-like texture) made from it. It is then topped with fruits and oatmeal. Eating something healthy for dessert is a new experience for me, but it was a good one that I’m already craving for it while writing about it. Ugh! Where to find acai bowls in Manila?

After having dessert in Holland Village (I seriously recommend Project Acai, you guys), our next stop was Singapore Botanic Gardens. When we came here for my birthday a few years back, we had a fantastic time dining al fresco over at Casa Verde. The original plan was to head to their Singapore Botanic Garden branch so we could roam around the expansive gardens and burn our breakfast before having lunch. Unfortunately, since we ended up too late, we arrived there in the middle of the noon when the sun was at its peak. Walking under the scorching sun was not a fun endeavor that we simply took a couple of photos and headed back to the station to catch the train to Orchard Road. 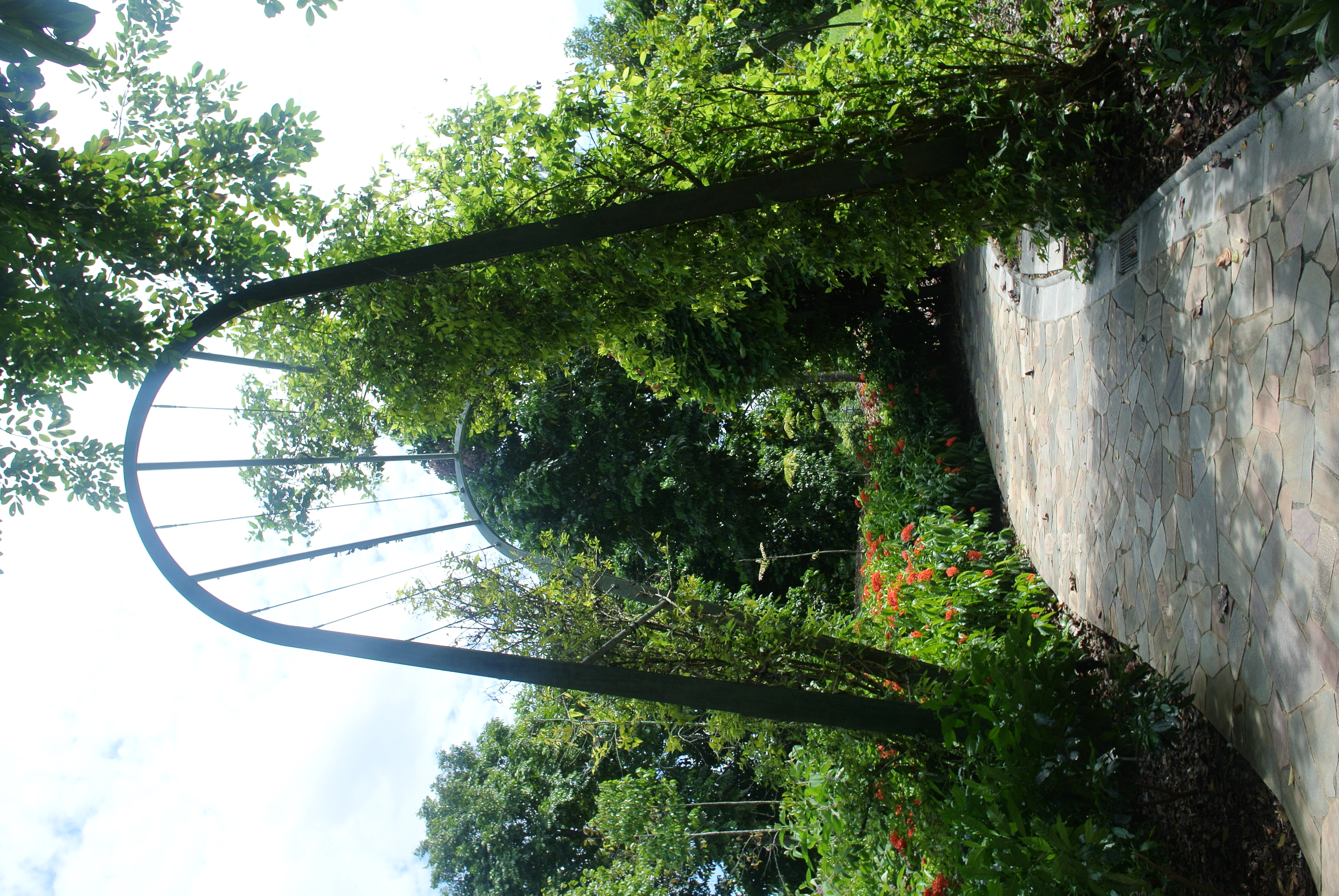 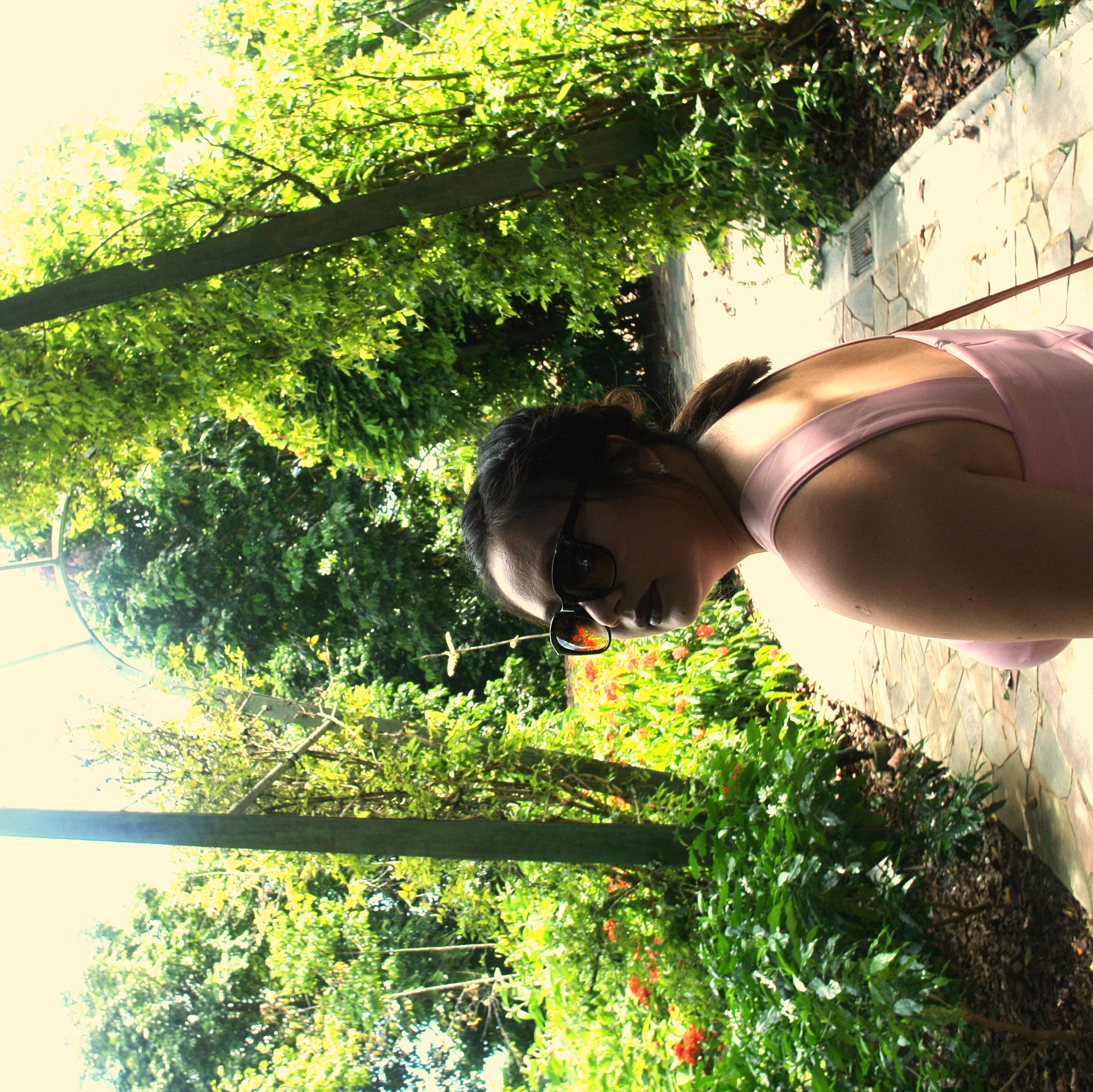 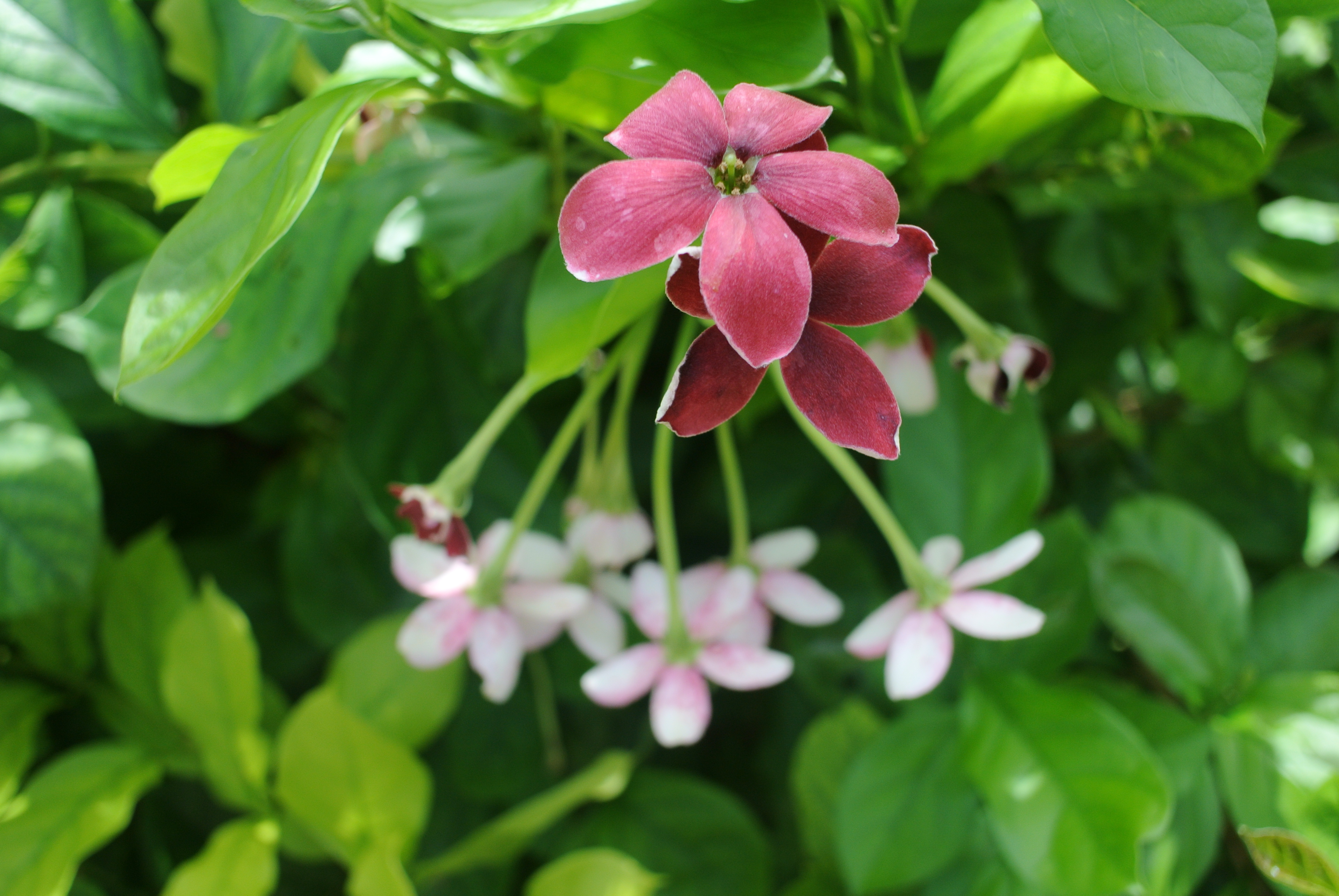 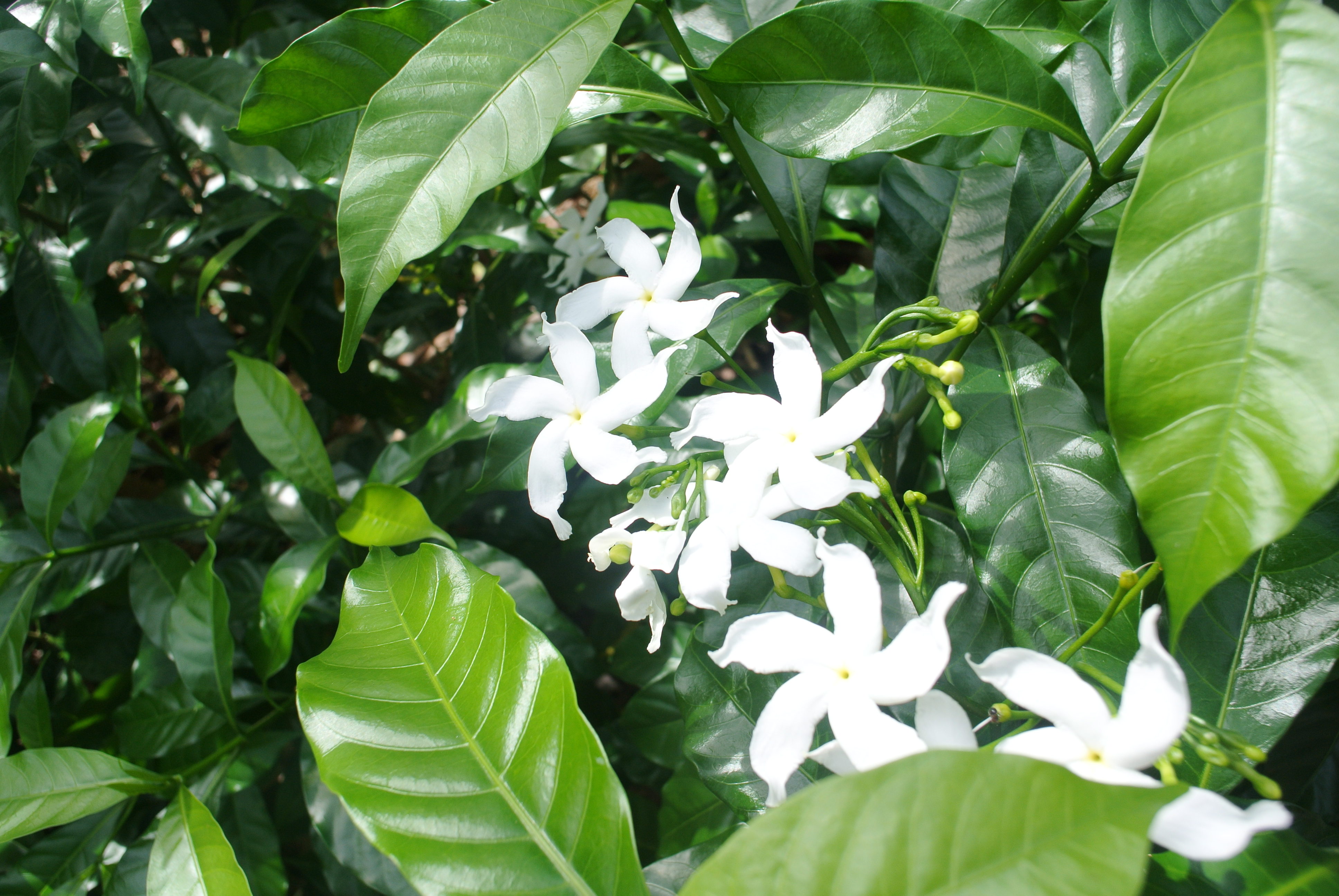 As you would know from the countless travel blogs touting Orchard Road as Singapore’s shopping street, I was not planning to buy anything there aside from the list I made from Sephora Singapore’s website. It is a shopping road – filled with malls, and mostly luxury brands, so I wasn’t keen on blowing my life savings in one day. However, since the biggest branch of Sephora was in Ion Orchard, I knew I had to go. It was why it was a facepalm moment when I found out that all the items I wanted to buy were either sold out (due to the holiday rush) or only sold online. Mission not accomplished! 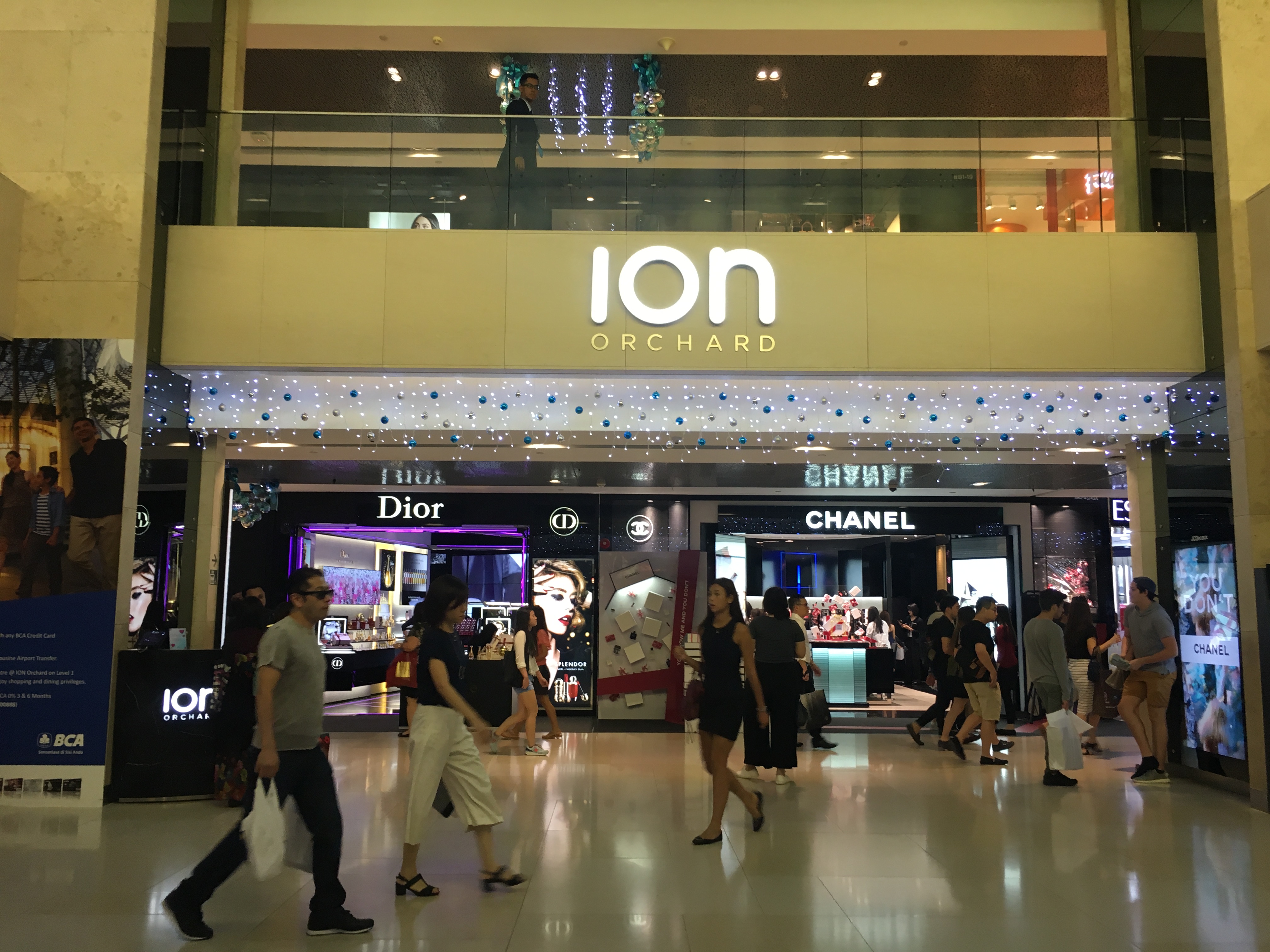 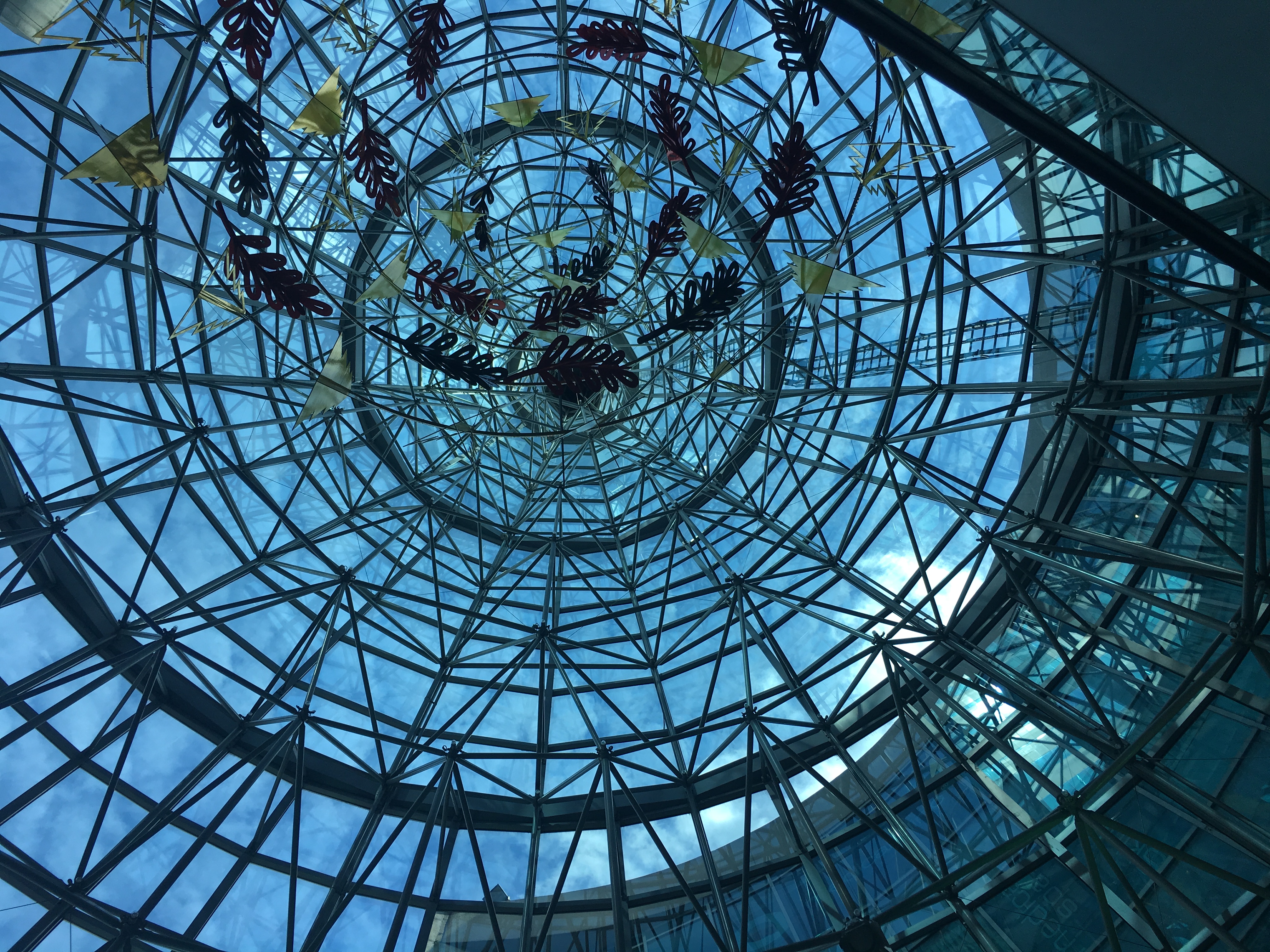 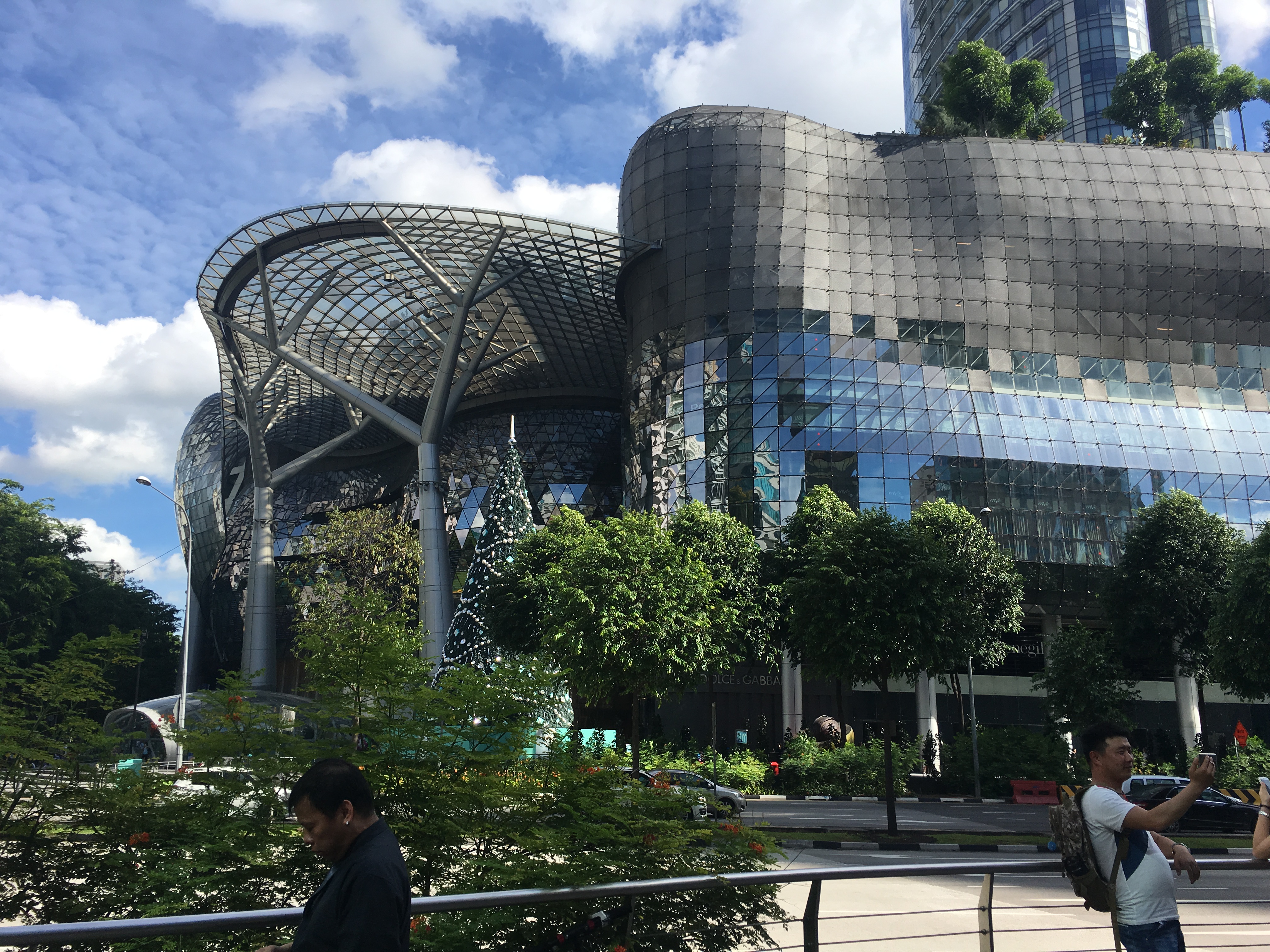 PSA: There has been a markup on the ice cream sandwich that Orchard Road is famous for. It used to be $1 and now it’s $1.20! 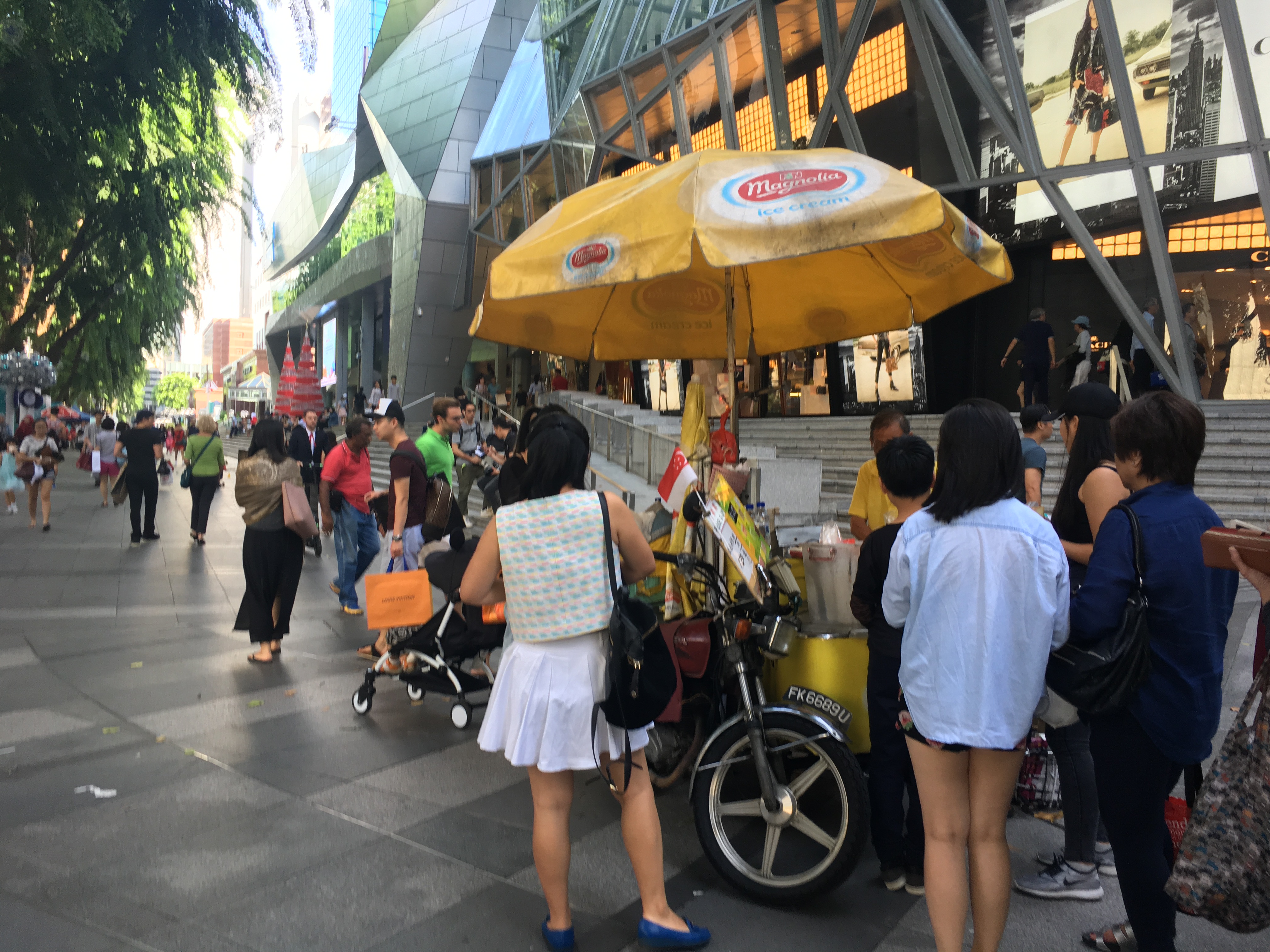 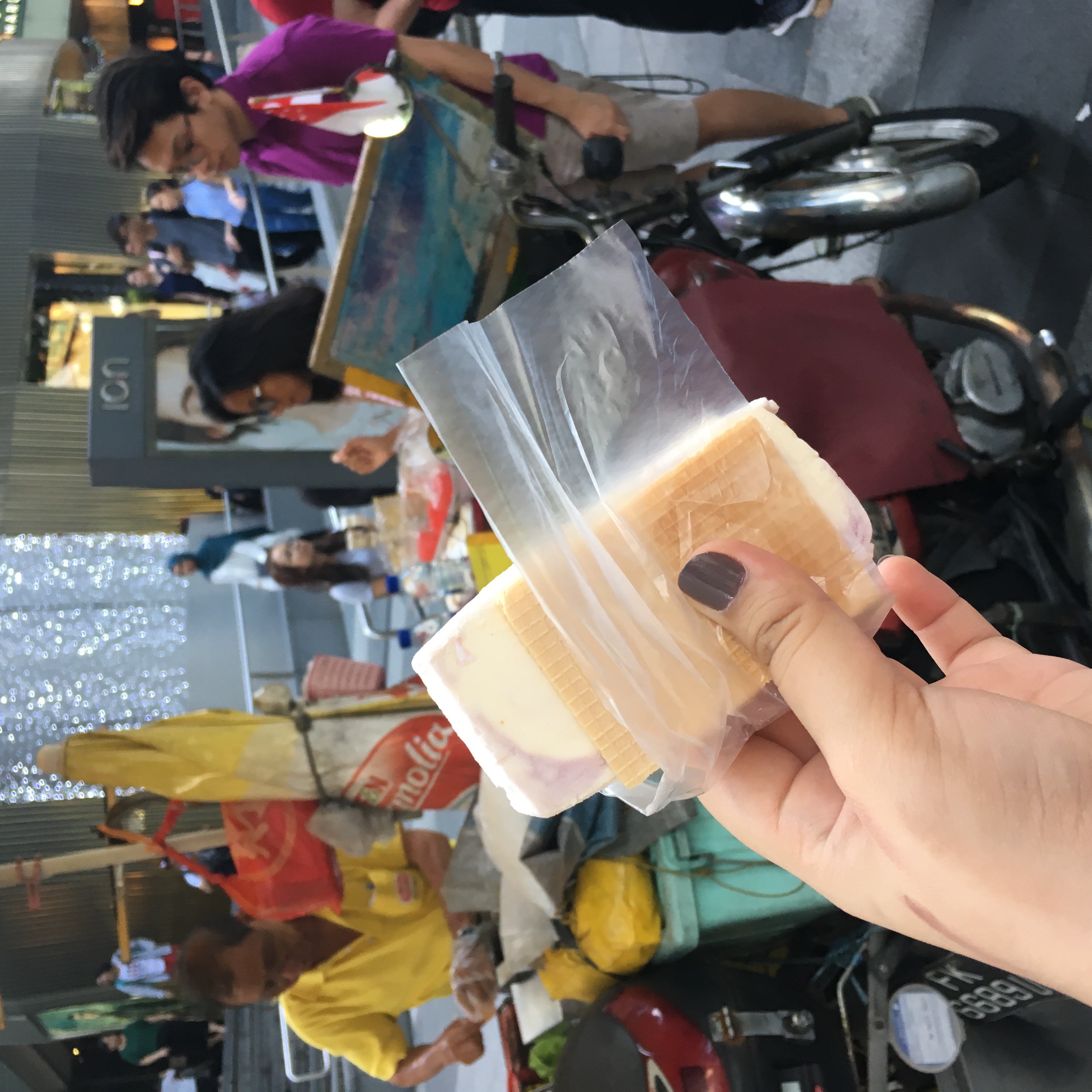 I did a quick search on my phone to find out if there were other branches of Sephora over at Orchard Road, and there was a smaller one over at Ngee Ann City. Getting inside the mall, you would already get the feeling that it’s a luxury mall. I’m not sure what the biggest giveaway is, the massive Chanel store near the entrance, the obnoxiously tall and sparkling Christmas tree, or Ladurée’s macaron display. Ladurée also has a branch in Manila (Ladurée Manille), but I made a promise to myself that I would only try their macarons once I set foot in Paris. 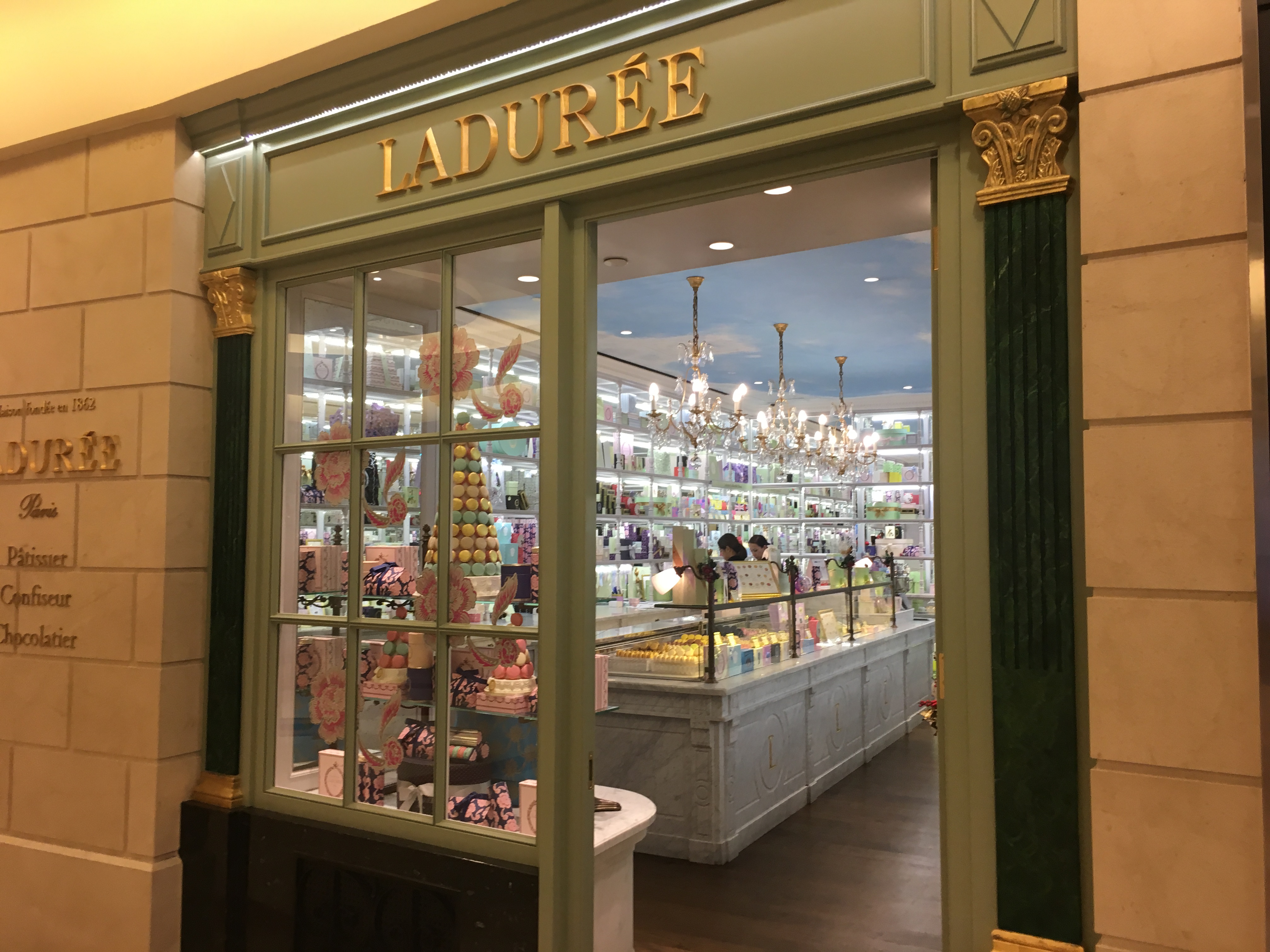 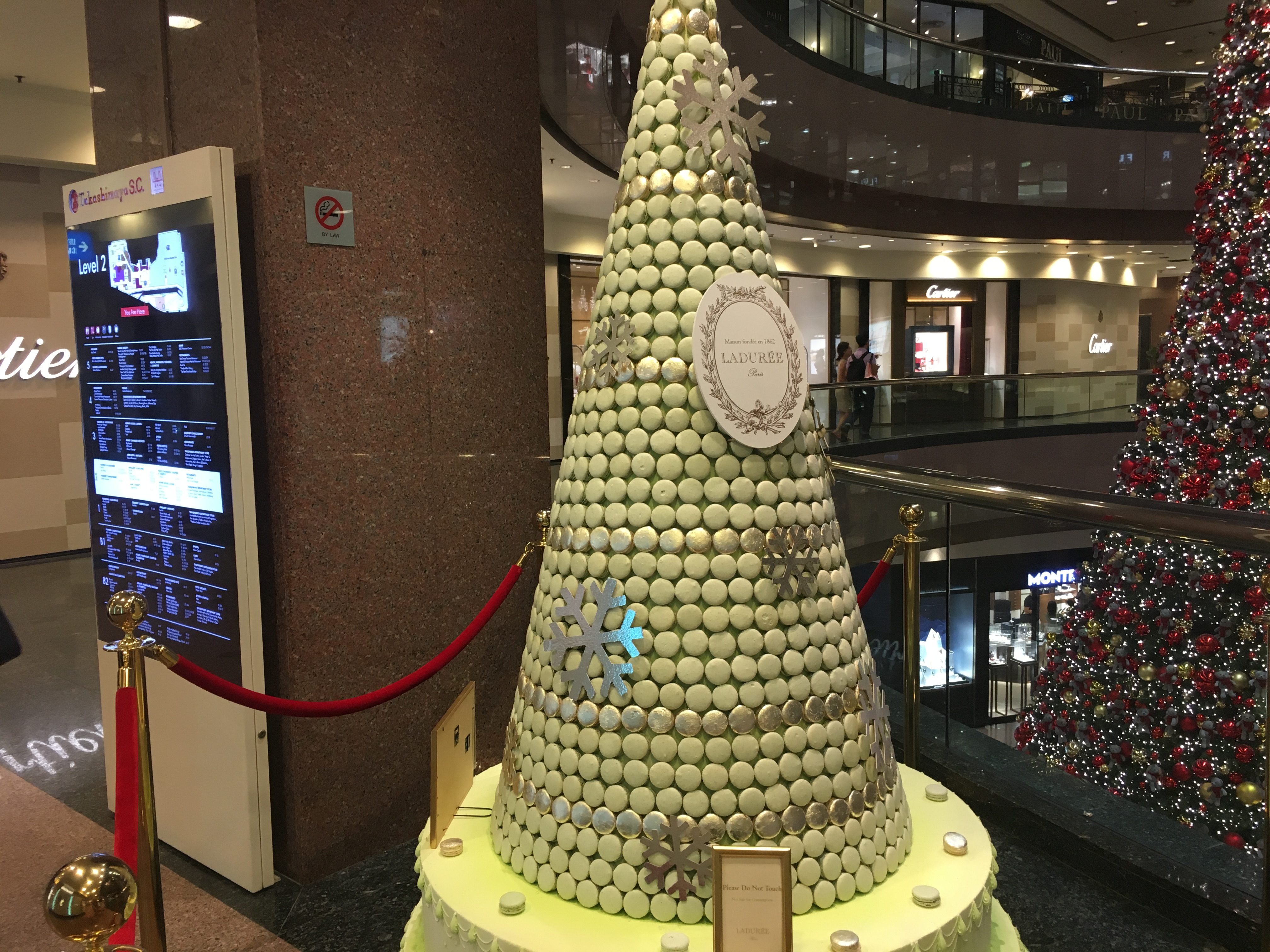 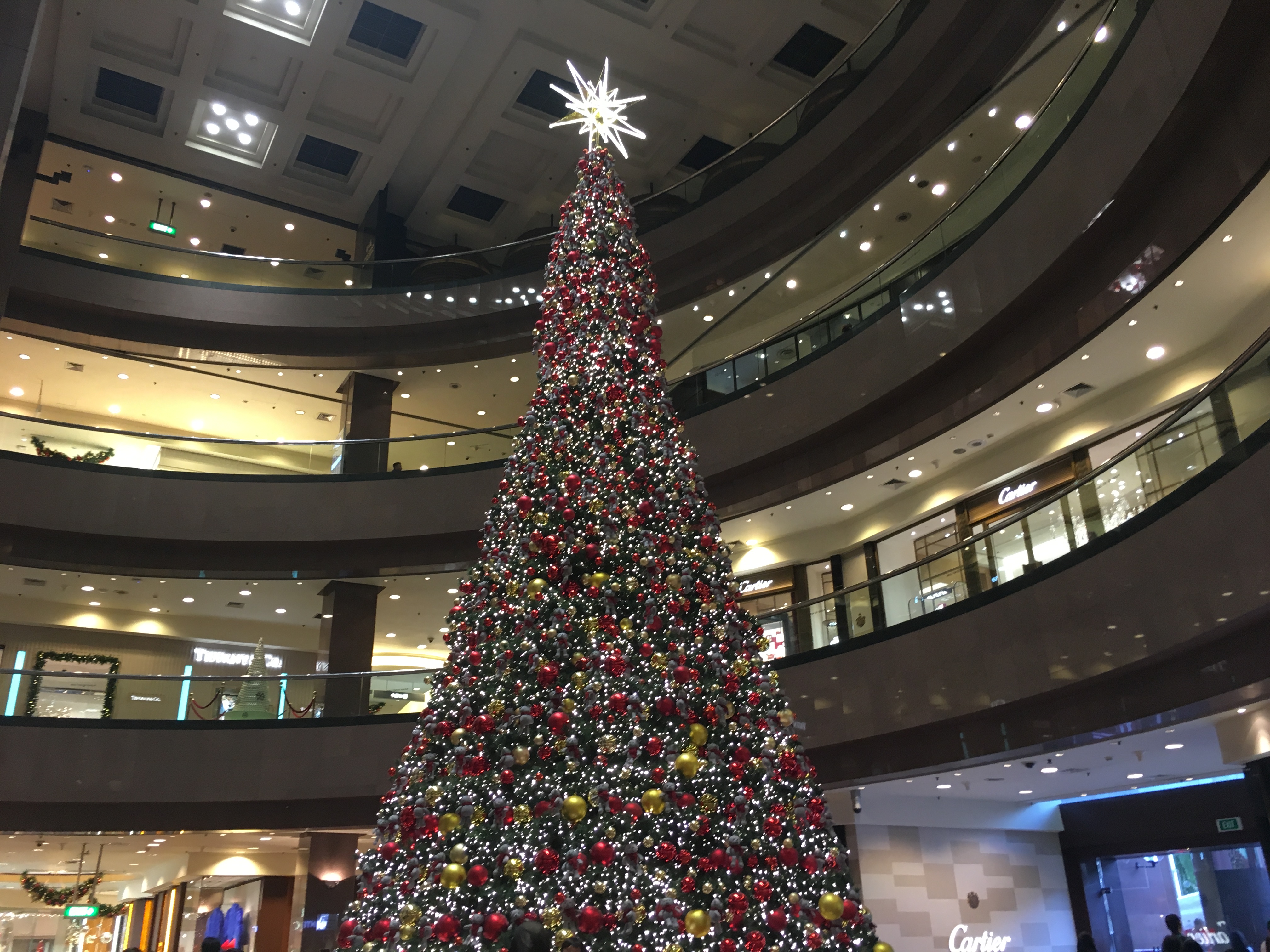 Alas, it was not in my destiny to buy the items I wanted to buy from Sephora. As a consolation, we checked out Kinokuniya. It’s a bookstore so vast, one could get lost in it. Literally. My sister got separated from us when she got too entranced with books and was near tears when we found her. The bright side is I got books, and the right books can do to your mind what makeup does to your face. 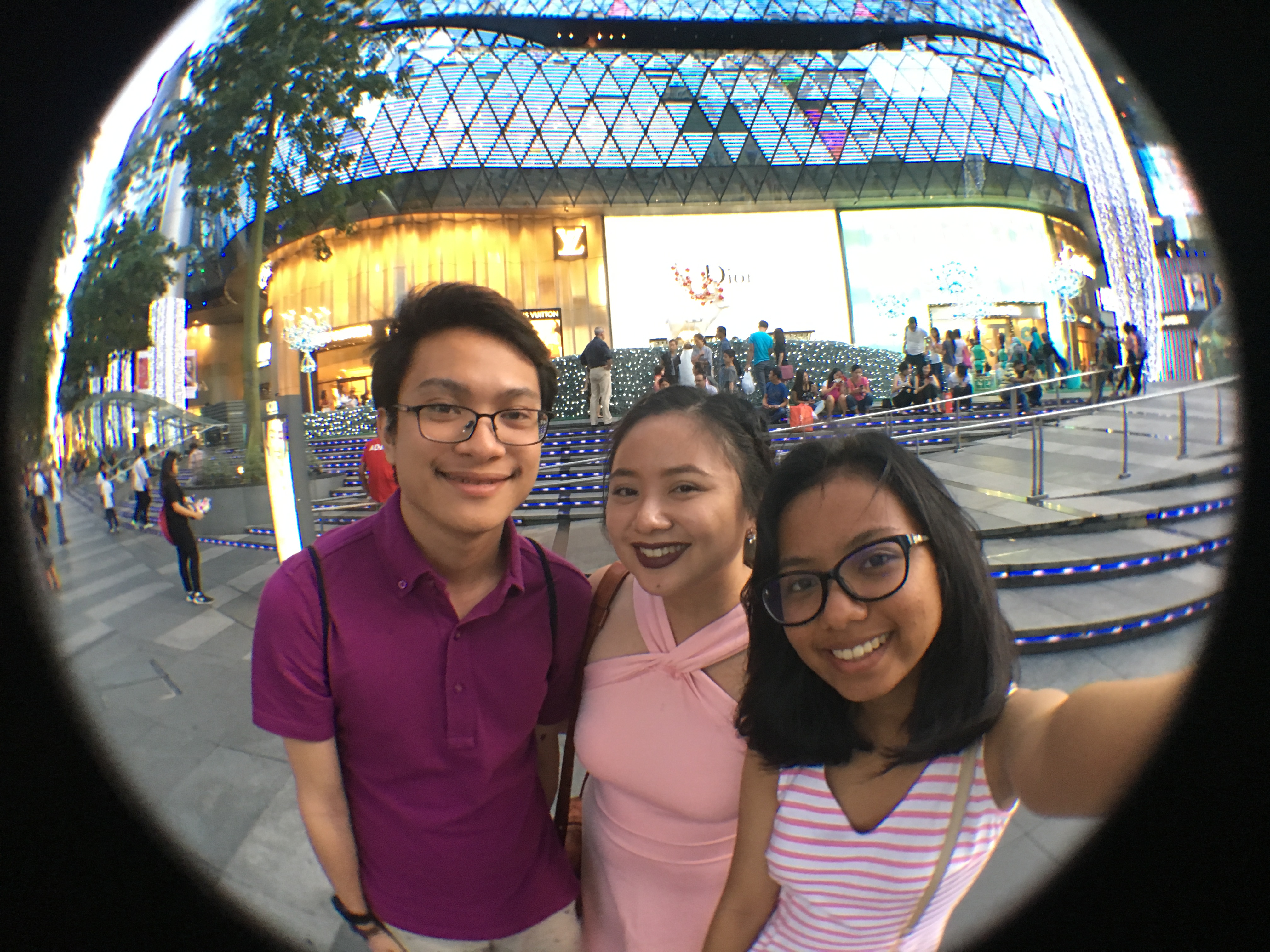 Since we were already in Orchard Road, we went to Wisma Atria for dinner. I remembered that there were a lot of dining options inside, so we aimlessly looked around until we found Picnic Singapore. It’s a whimsical garden themed food hall where they hand you an electronic buzzer that you will use to place orders. There were food trucks in one spot where you use the touchscreen menu to order, place your buzzer in the machine, and it will alert you when it’s time to get your order. You will see the total amount you have to pay using the machine near the exit, and you either use your card or place your money in the machine’s cash slot. Such a unique experience. 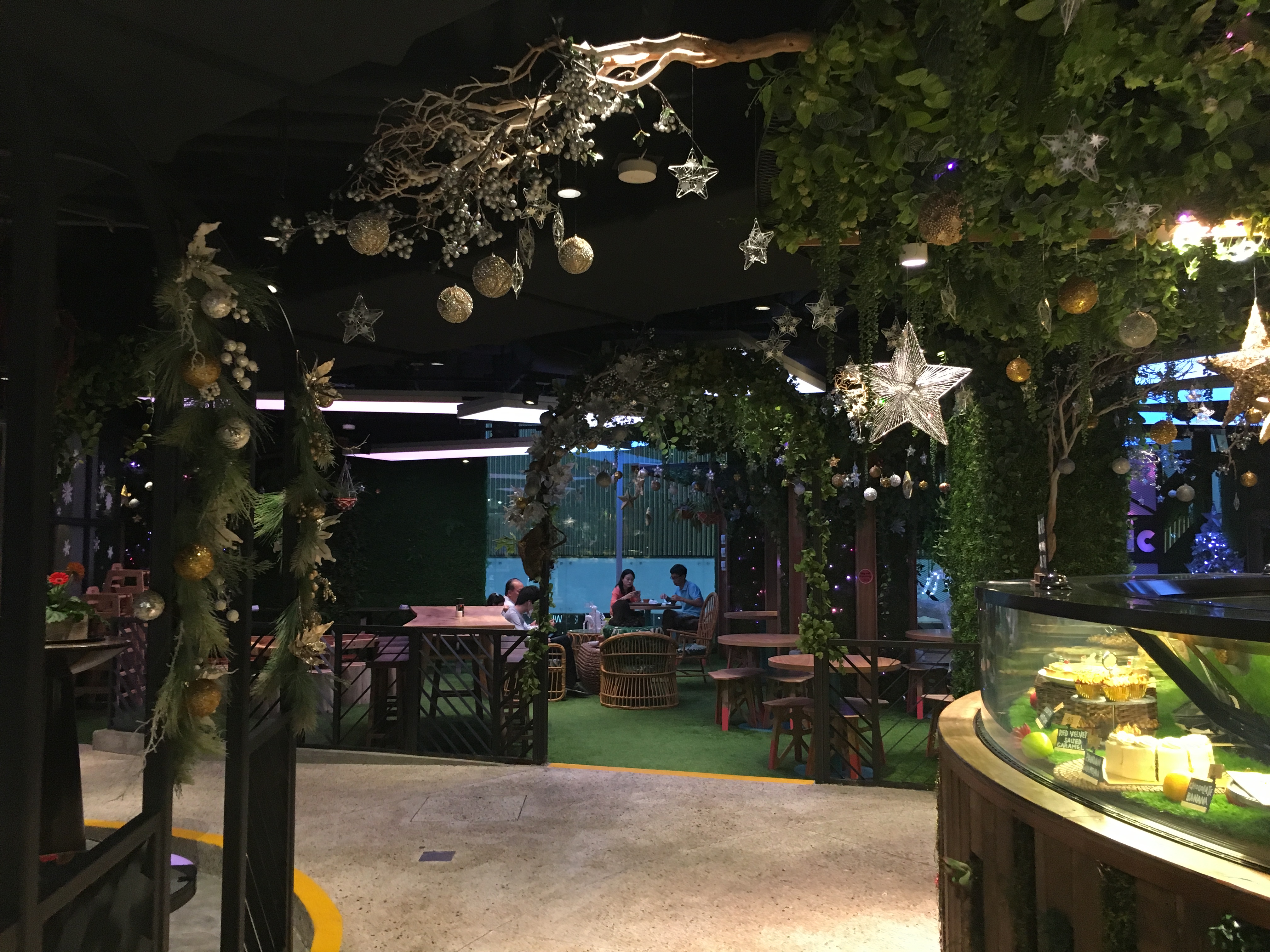 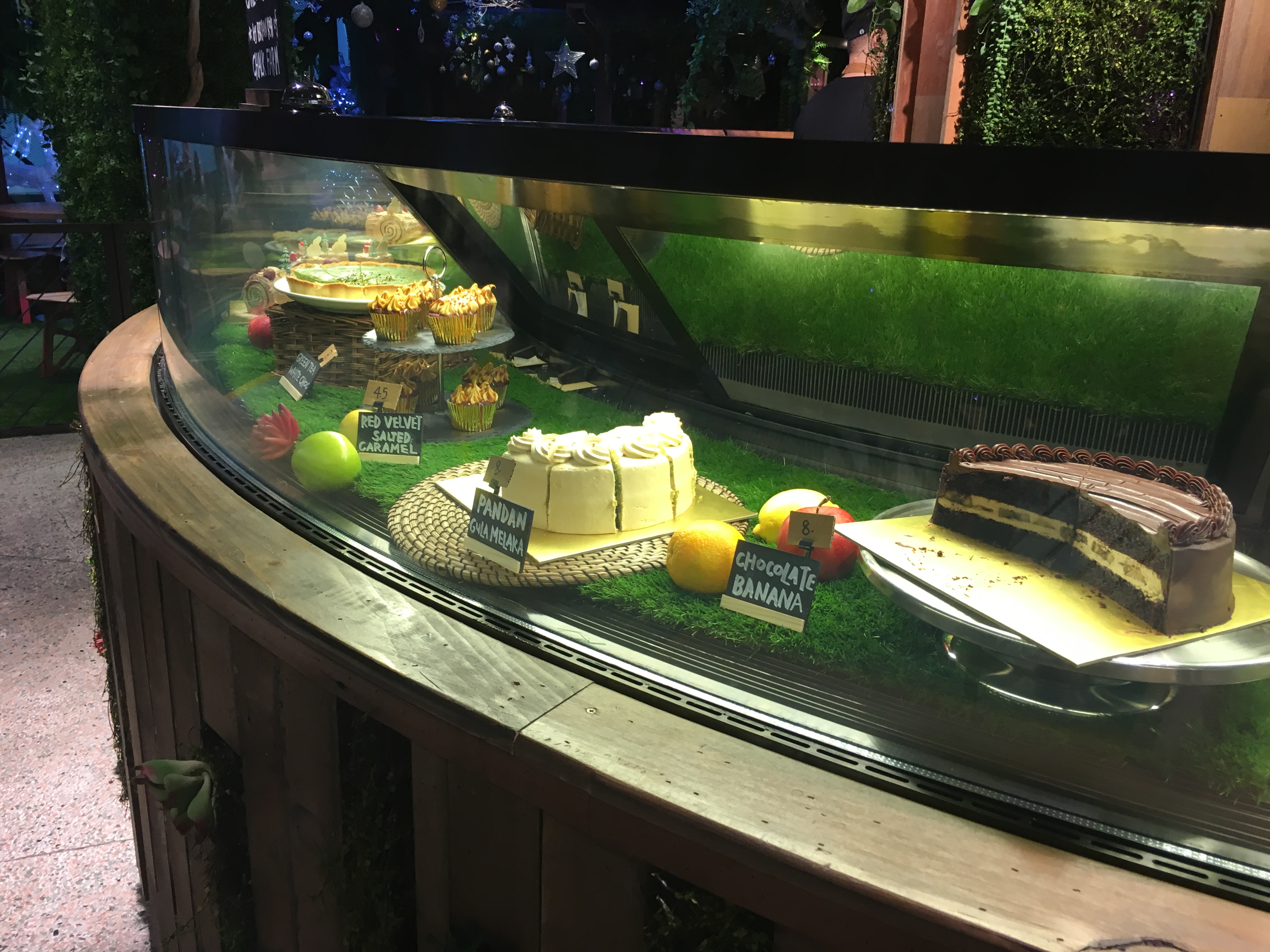 Unfortunately, my taste buds wildly disagree. Everything we ordered was just meh, and the novelty immediately wore off upon eating. Essentially, you’re paying the $$ for the well-decorated food hall, the ambiance, and the automation. I’ve had better in a hawker center. In hindsight, I should have dragged the sibs to the Din Tai Fung within the same building. 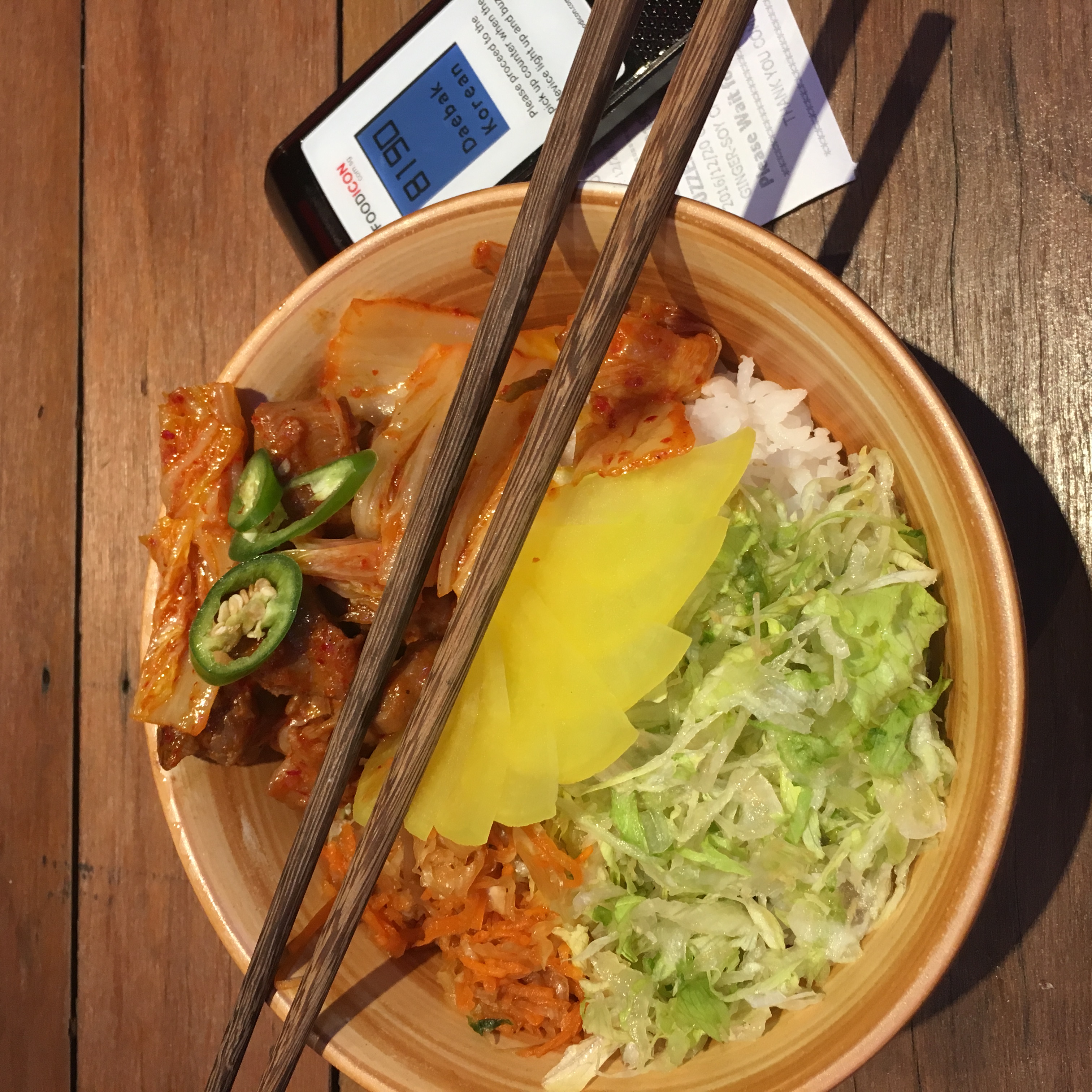 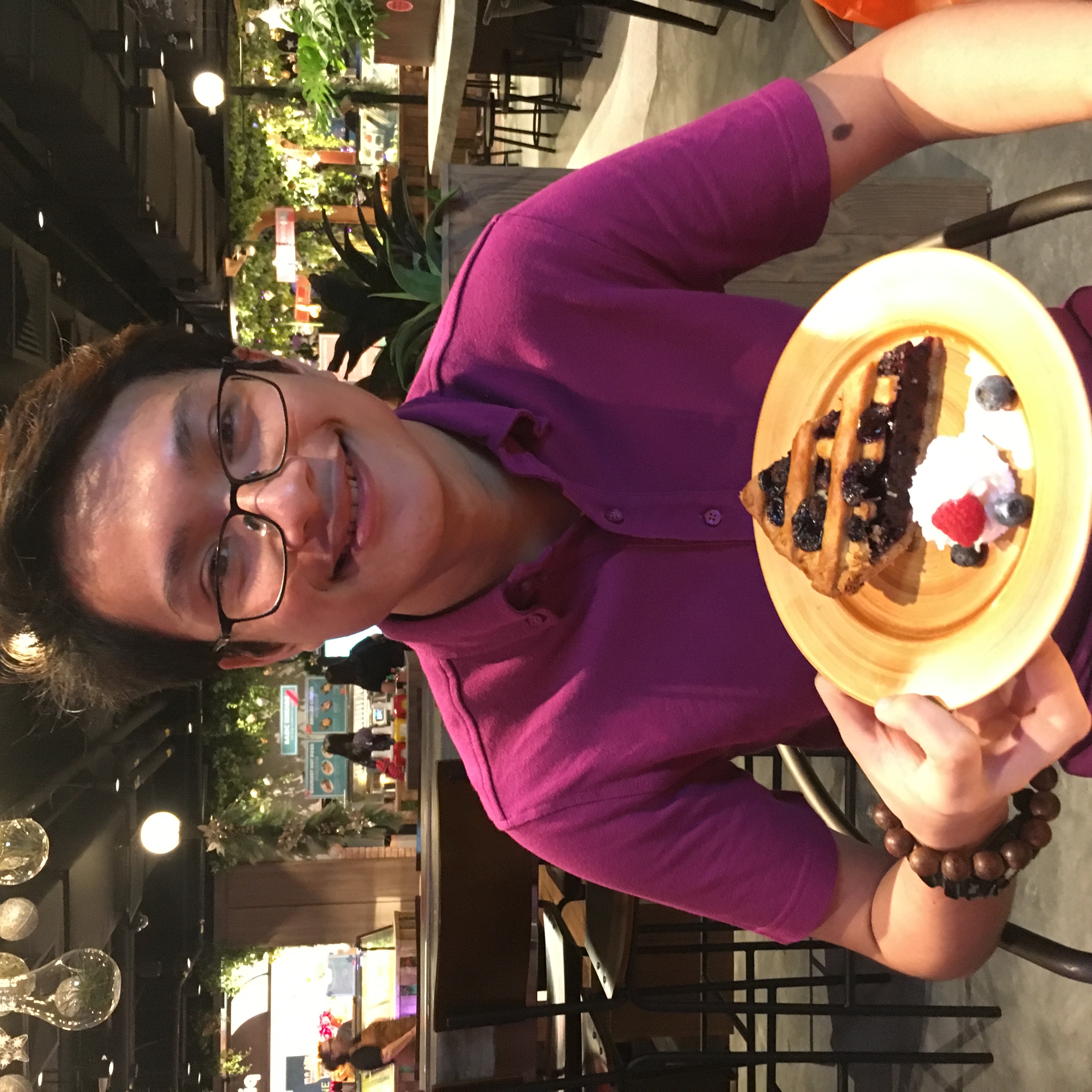 On another note: I made an oopsie by publishing my previous post/Day 5 first instead of this one/Day 4. I try to get posts out chronologically because this blog is my online journal of sorts. But I’m human who makes mistakes. Oh well, better luck next time!