Another day, another blog post! This may seem off topic (hello, I know you’re here to read about our Everland experience) but I honestly have difficulty sharing links leading to my blog to people I actually know in real life. How weird, right? I was never confident with my ability to pen down words and string them together into something cohesive. And whenever I read it back, it always feels like I barely translated my thoughts into writing. Lately, though I’ve been trying to get out of my comfort zone [of writing for myself and having strangers/internet friends read them] and sharing posts over at Facebook (inconsistently, if I may add). It was a pleasant surprise to actually see my blog stats picking up and that there are people I know reading all the word vomit. Quite pleasant indeed. 🙂

I have always been a huge fan of amusement parks, and finding out that there were two major parks at Seoul made me giddy! While making a choice between Lotte World and Everland, we asked around among friends who have been there for a visit. As it turns out, Everland has the more exciting rides and so off we go to Everland. Unfortunately, it’s a bit farther from the city and it was more convenient to take the shuttle bus that leaves Myeongdong at 9:30 AM. It heads back to the city at 6:30 PM. You can also take the train but we heard that you still have to take the bus from the train station and that it’s mostly packed. The downside of taking the shuttle bus though is that you don’t have any freedom over your schedule. There were a number of rides that we couldn’t line up for because queues literally take hours. 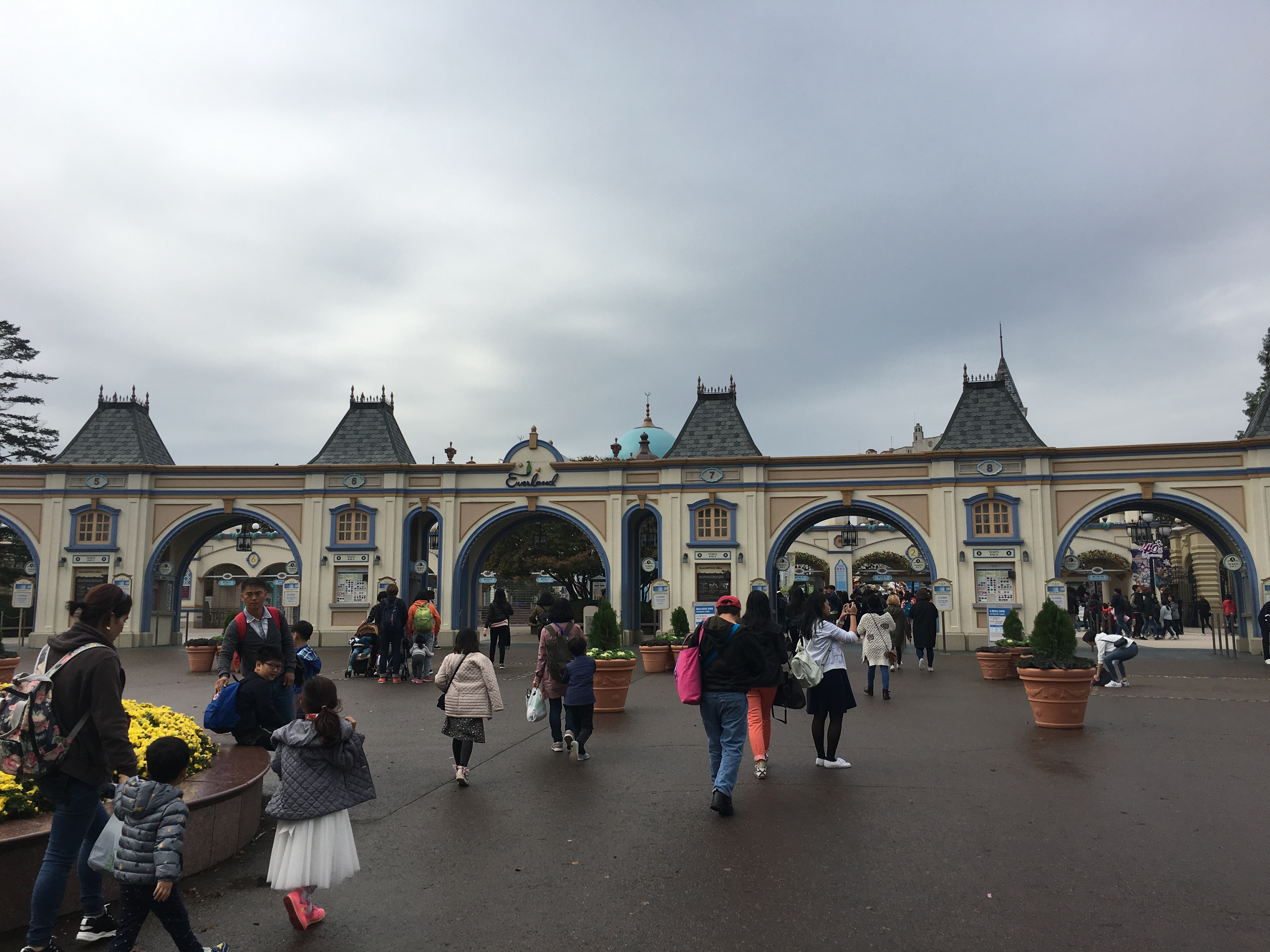 We arrived at the park at almost 11 AM. I’m usually in amusement parks at opening (I just love them so much), and the bright side to this is that there was a shorter queue to the entrance. If I ever head back to South Korea and visit Everland, I would either take the public transportation and go on an off-peak day/weekday, or splurge and pay for a private car/taxi rental. I never did find out if they sold VIP/Fast Pass tickets, but if they did, I would totally buy those too. 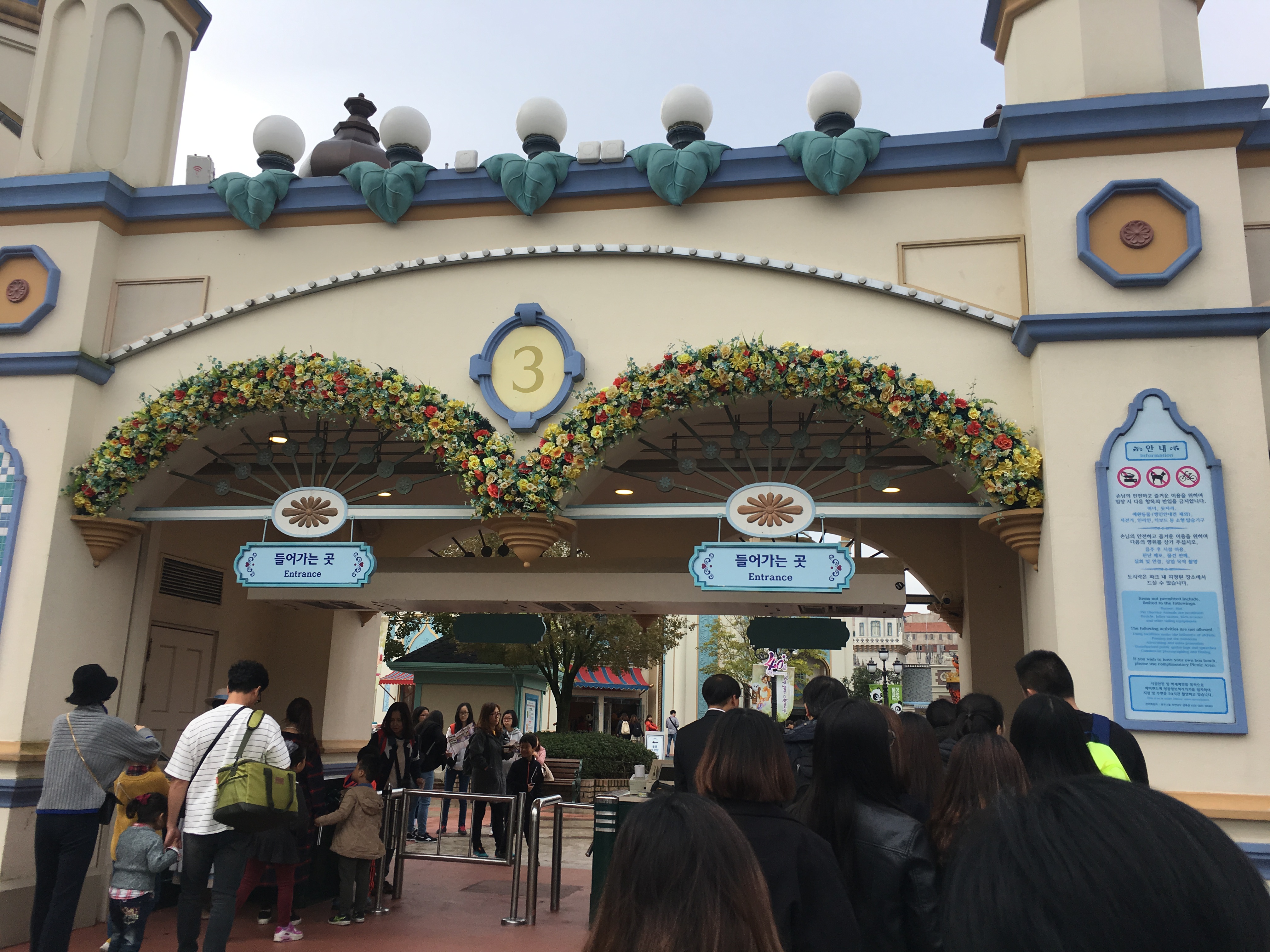 My first agenda was to check out the clothing stores for shoes because my feet was literally bleeding. I put on band aids to the biggest blisters, wore heat tech tights, then socks to try and minimize the pain. But guess what, when we got to Everland, my foot has bled enough to soak through my socks. It was that bad. Female shoes in most Asian countries run small sizes and I resorted to buying men’s white sneakers. I bought it one size larger and it was heaven. It was a good thing too because getting around Everland consisted of walking in slopes. 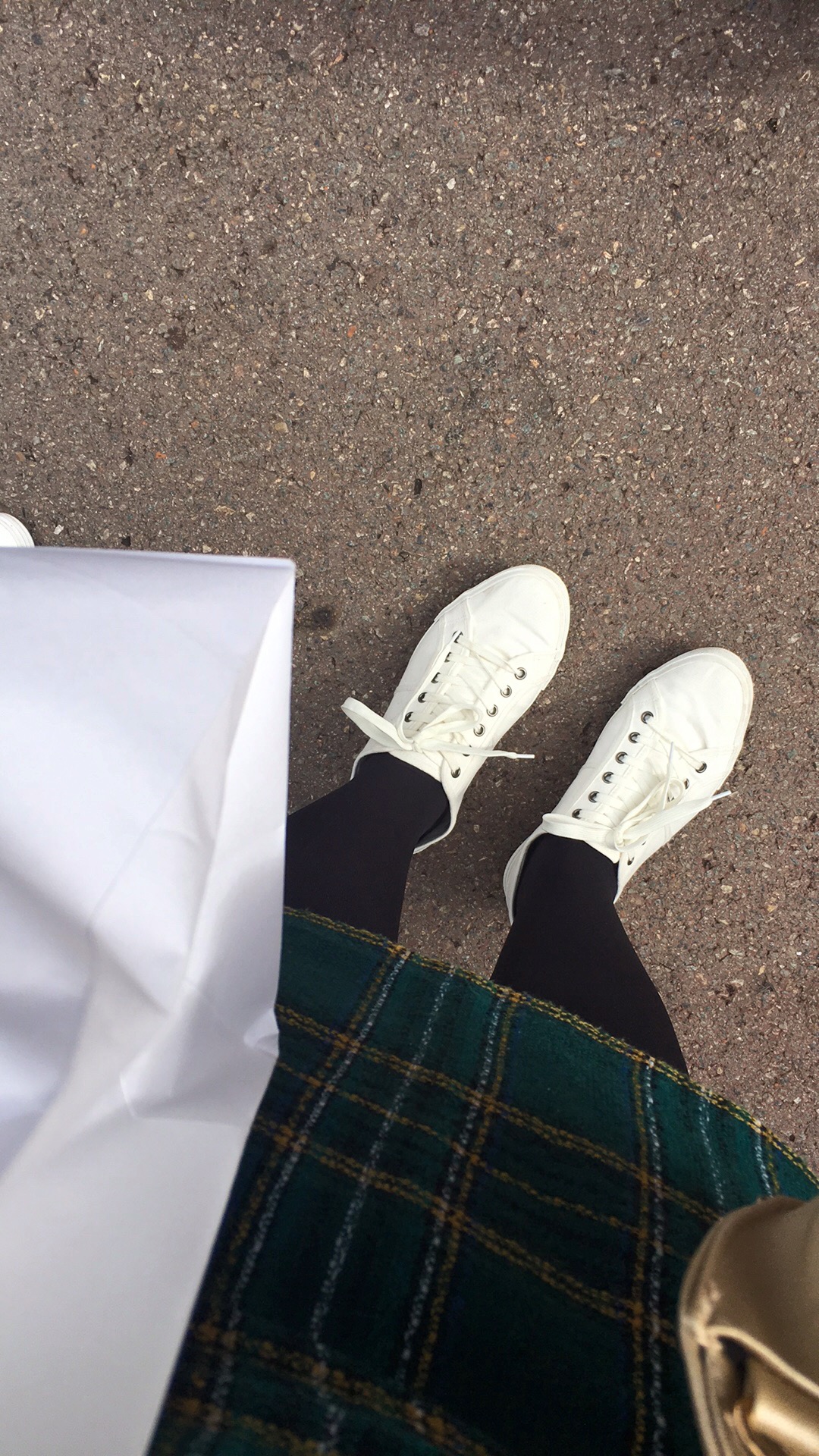 It was October when we went, and the decor was all for Halloween. Admittedly, it wasn’t as spooky as I’d like and I’ve seen the Halloween decor executed better somewhere else. They did have horror houses set up, as well as makeup booths where you can get fake blood on your face – even professional prosthetics if you pay more. 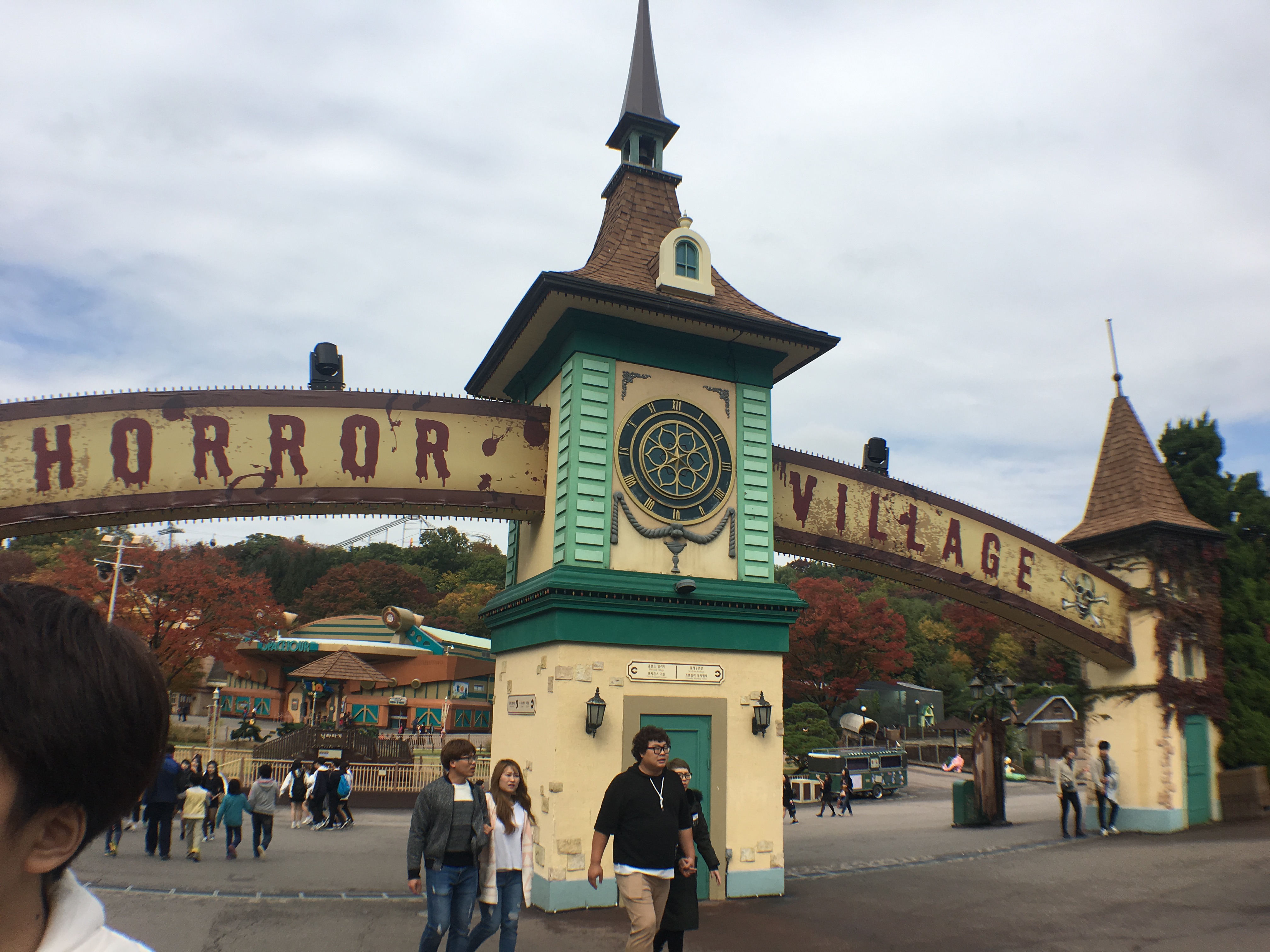 The queue for the wooden rollercoaster with the crazy 183 ft. drop had 210 waiting time when we got there, more for the people who lined up after us. We ended up going out the line to buy snacks from the stall, and guess who bought ice cream while in less than 10-degree weather? Of course, I had to. 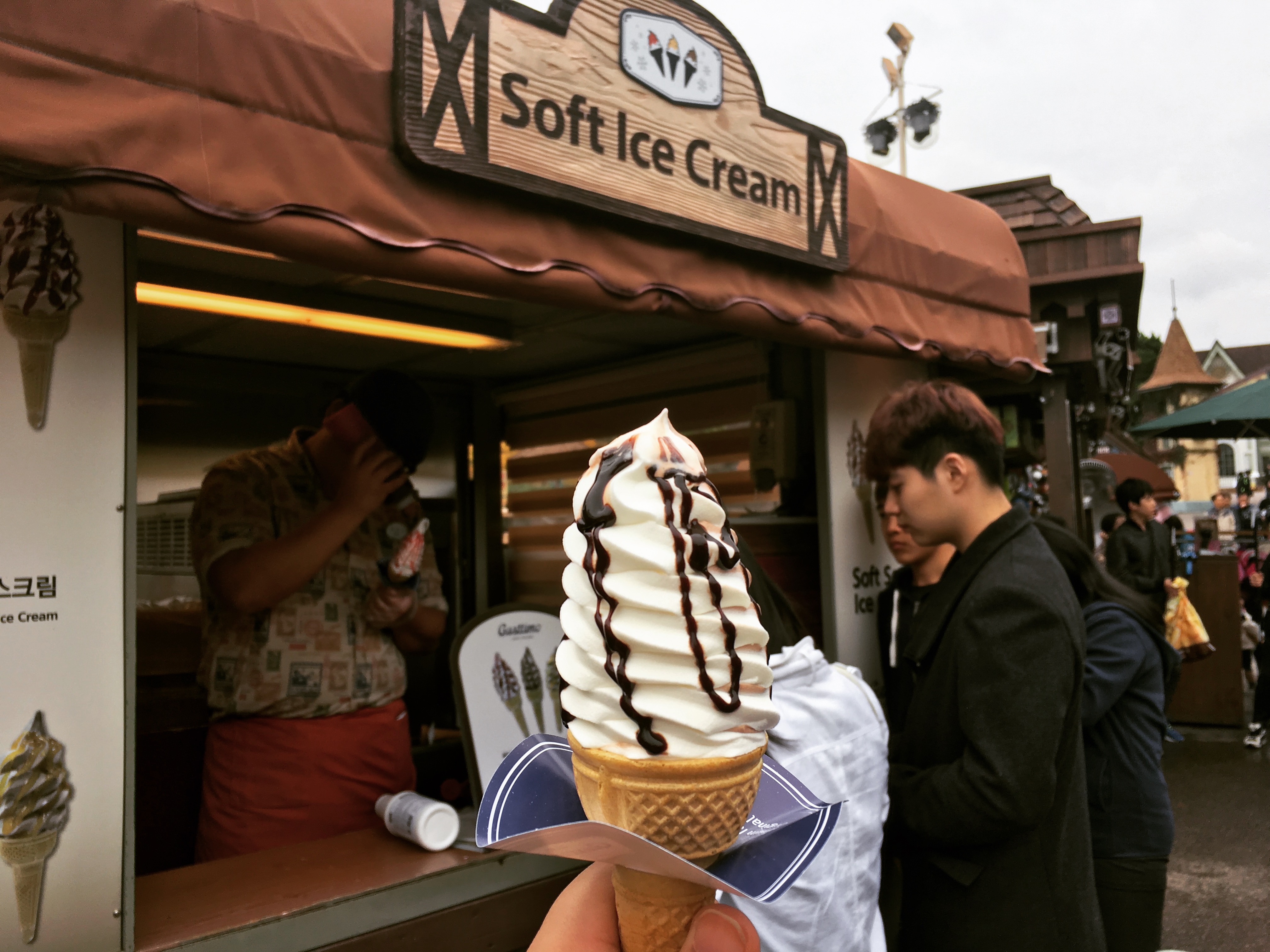 T Express is the highest wooden roller coaster in the world, with a 77-degree vertical drop. No wonder the line was insane. They had monitors all over, with footage of people screaming their lungs out playing, and there was where we found out that Tin don’t do rides. We are truly sorry Tin – for making you learn how to ride a bike and making you ride a rollercoaster. Upon checking the picture of us on the ride, we couldn’t stop laughing at how the three of us looked like we were having the time of our lives while Tin had the expression that she wanted to be anywhere else but there. Haha! 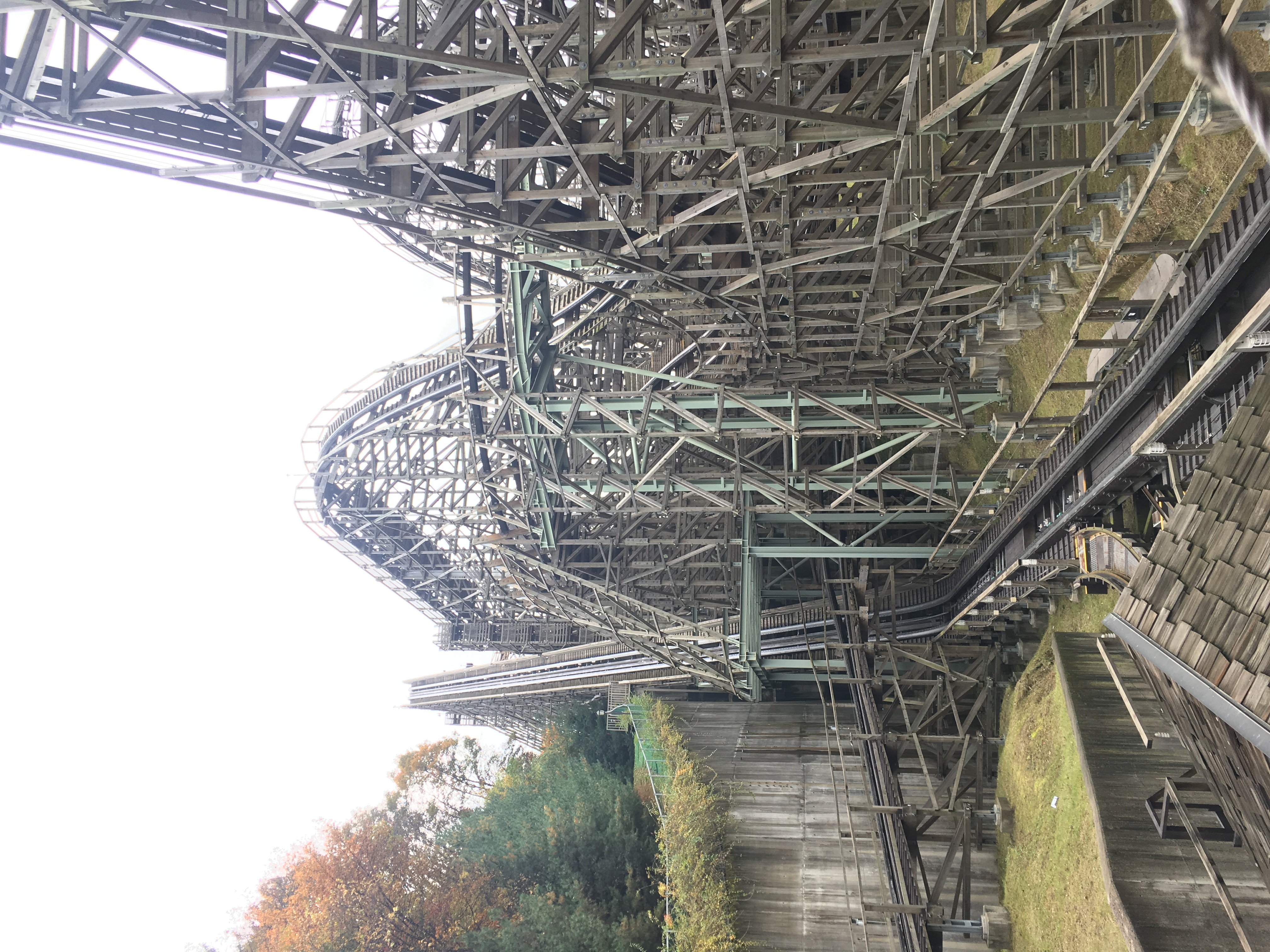 Everland is truly for all ages. There were animals all over the park, and not just rides. Kids could even go on donkey rides if they wanted to! (Donkey rides not pictured) 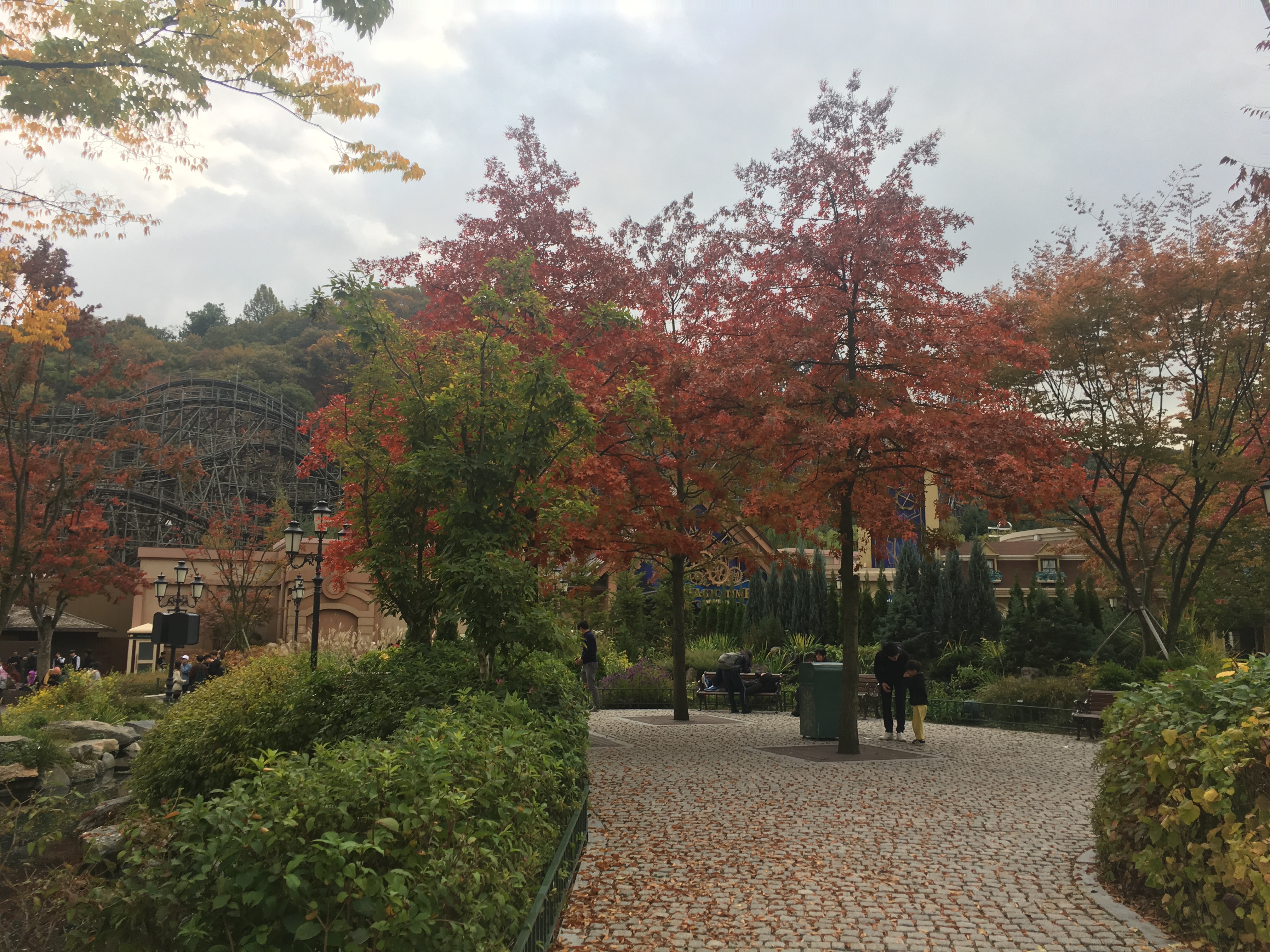 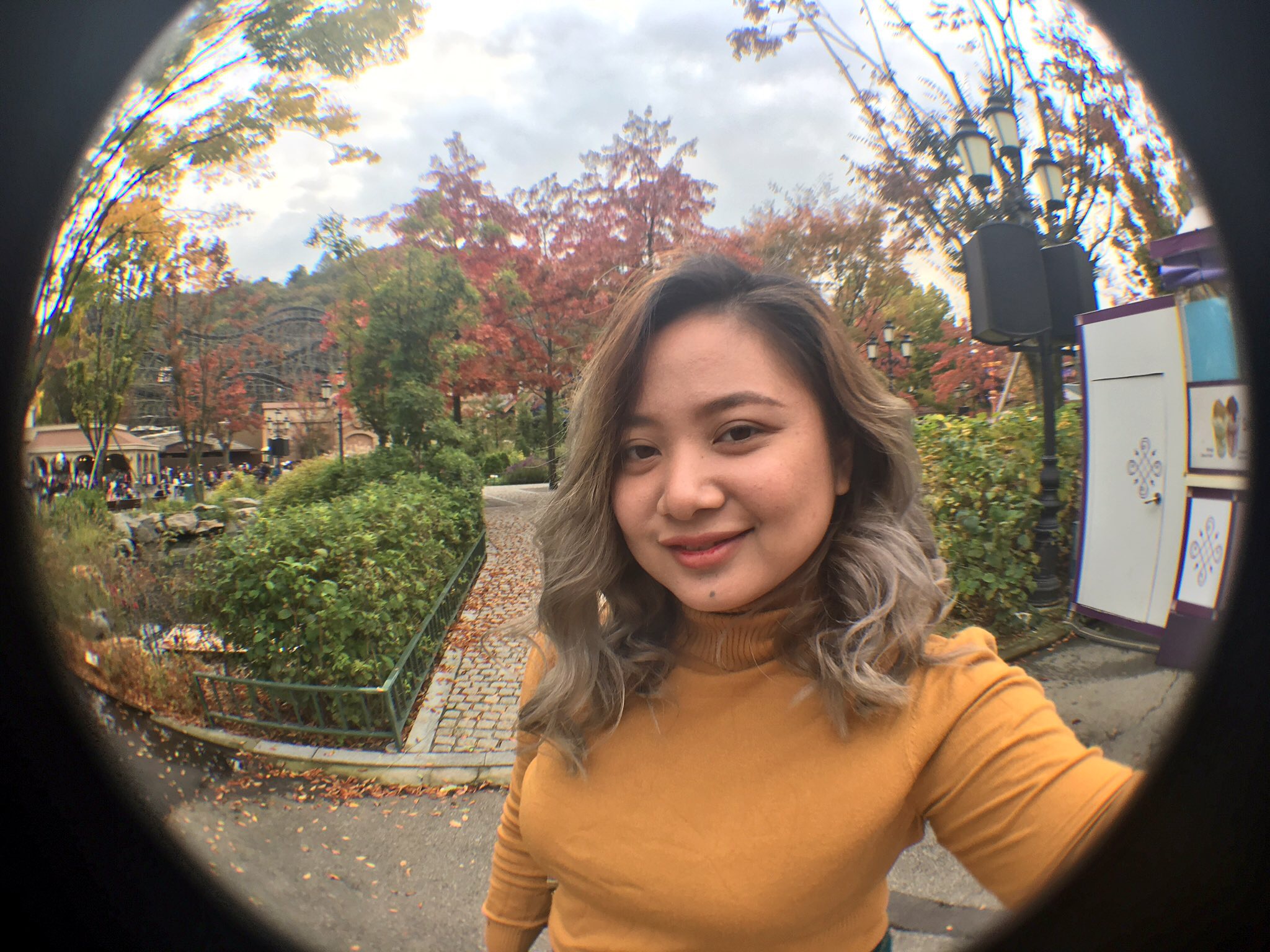 Like every vast amusement park (Ocean Park had cable cars and train, Disneyland has trains, etc), Everland had a ski lift to bring visitors up the mountain and to a different part of the park. We’ve used up a lot of energy exercising our vocal chords out aboard the T Express and unanimously decided to queue for the ski lift. It was fortunate that we did because the staff also closed the way up for a parade of.. I don’t really know. Are bears the characters of Everland? 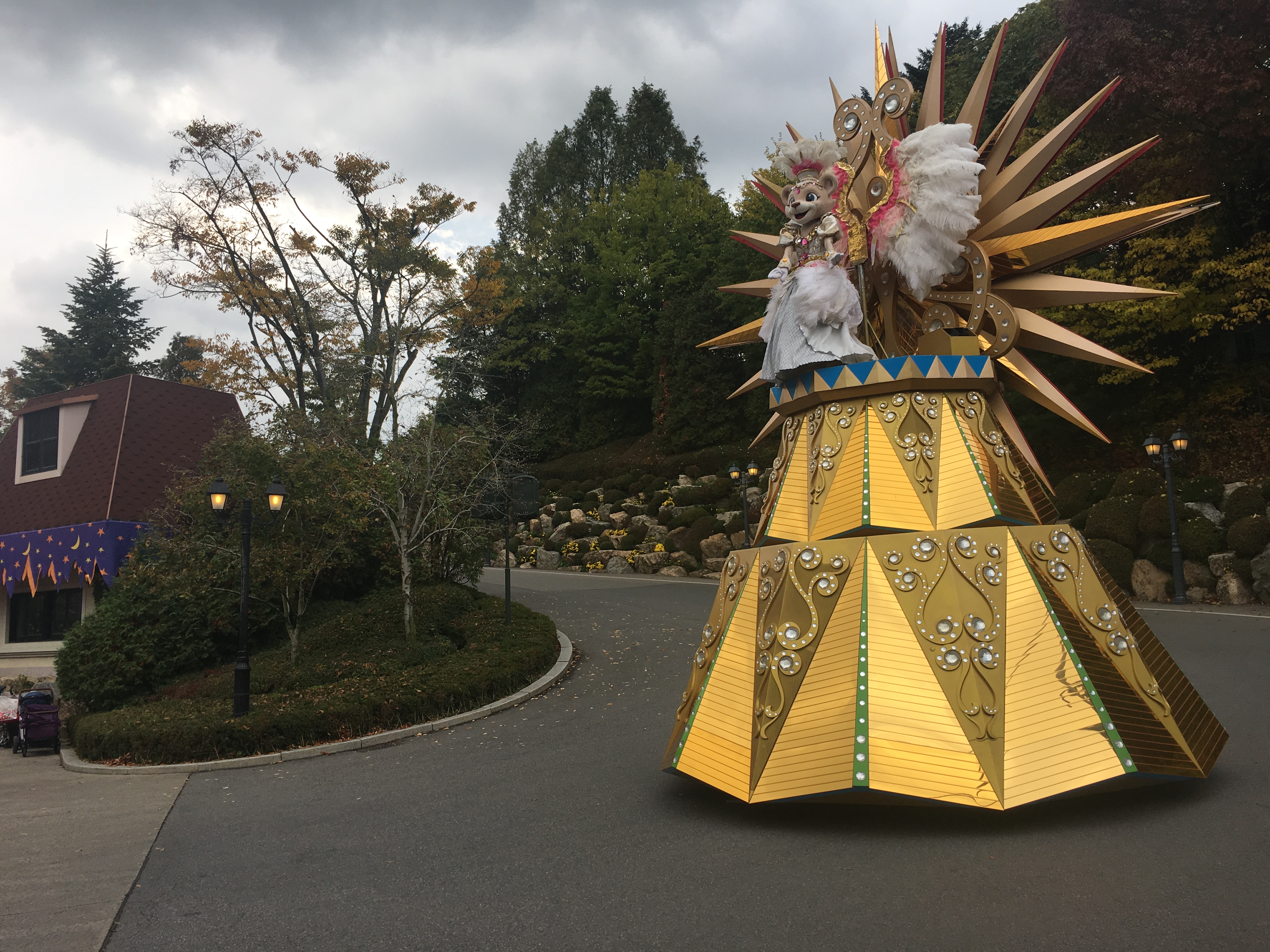 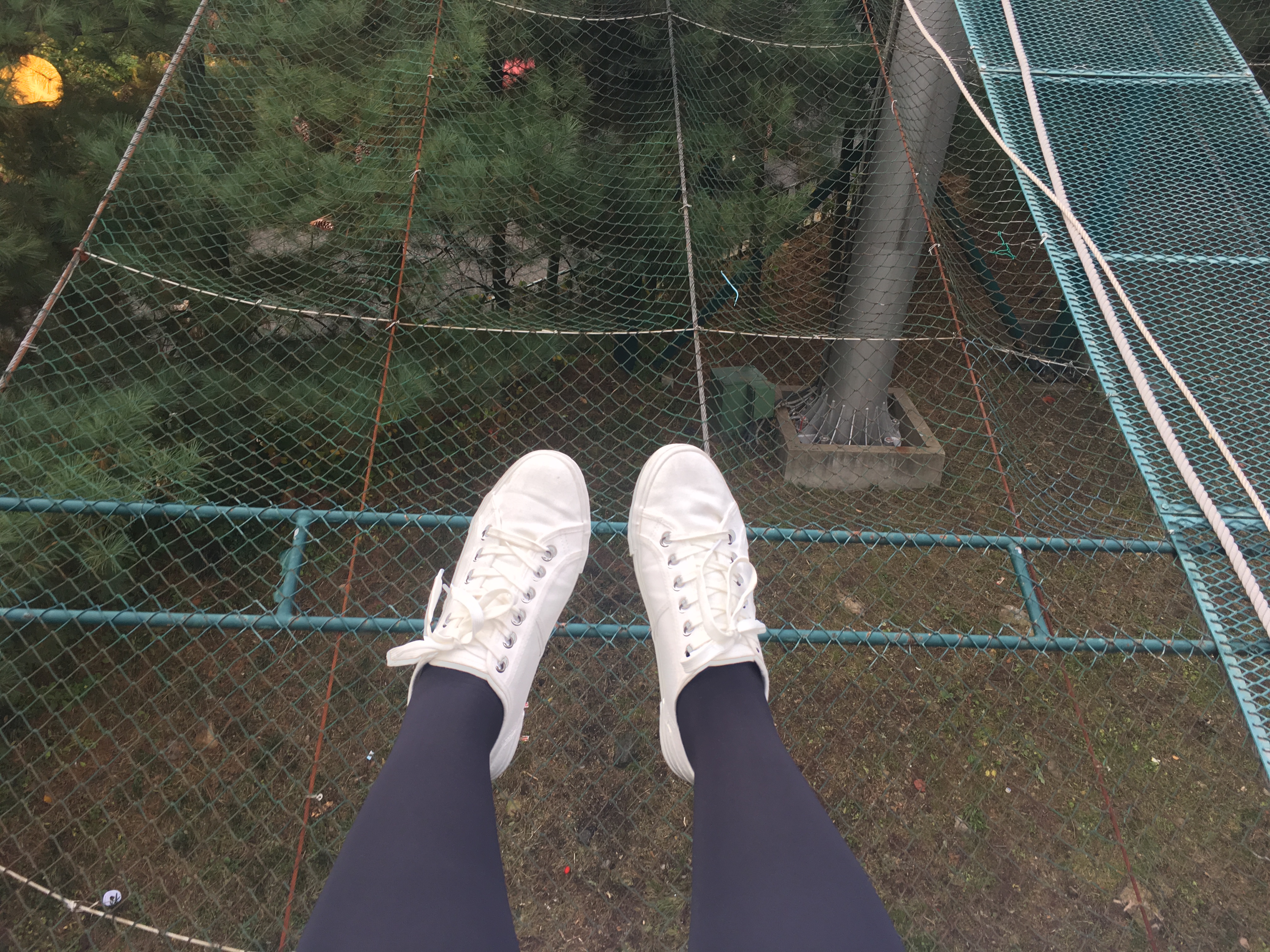 Interesting note on the ski lift: see those bars attached at the back? Those were for strollers so parents do not have to carry them! 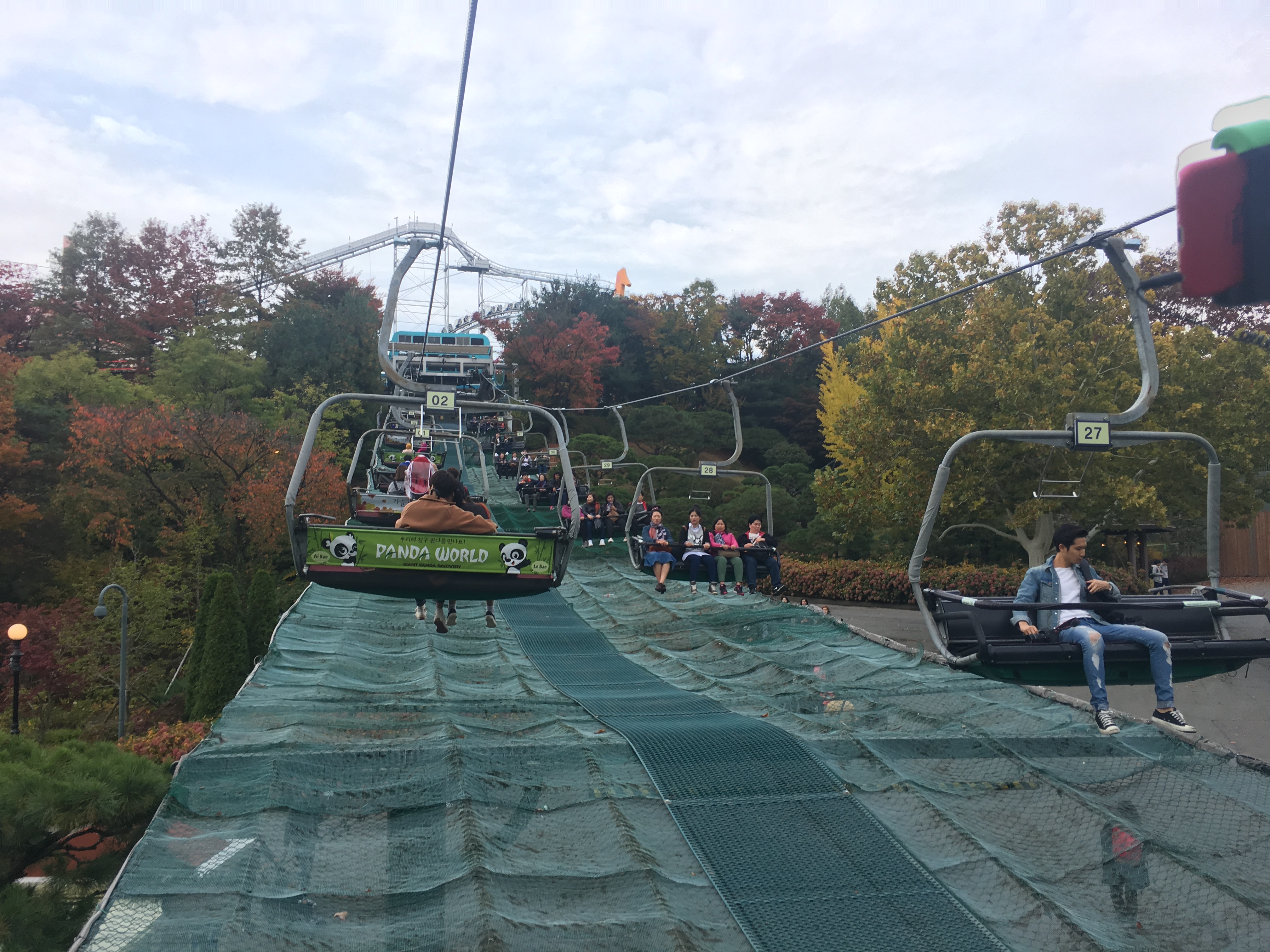 Similar to the previous day, we didn’t get to have an actual sit-down lunch because we were running short on time. We bought whatever snack seemed interesting from the food stalls we pass by. 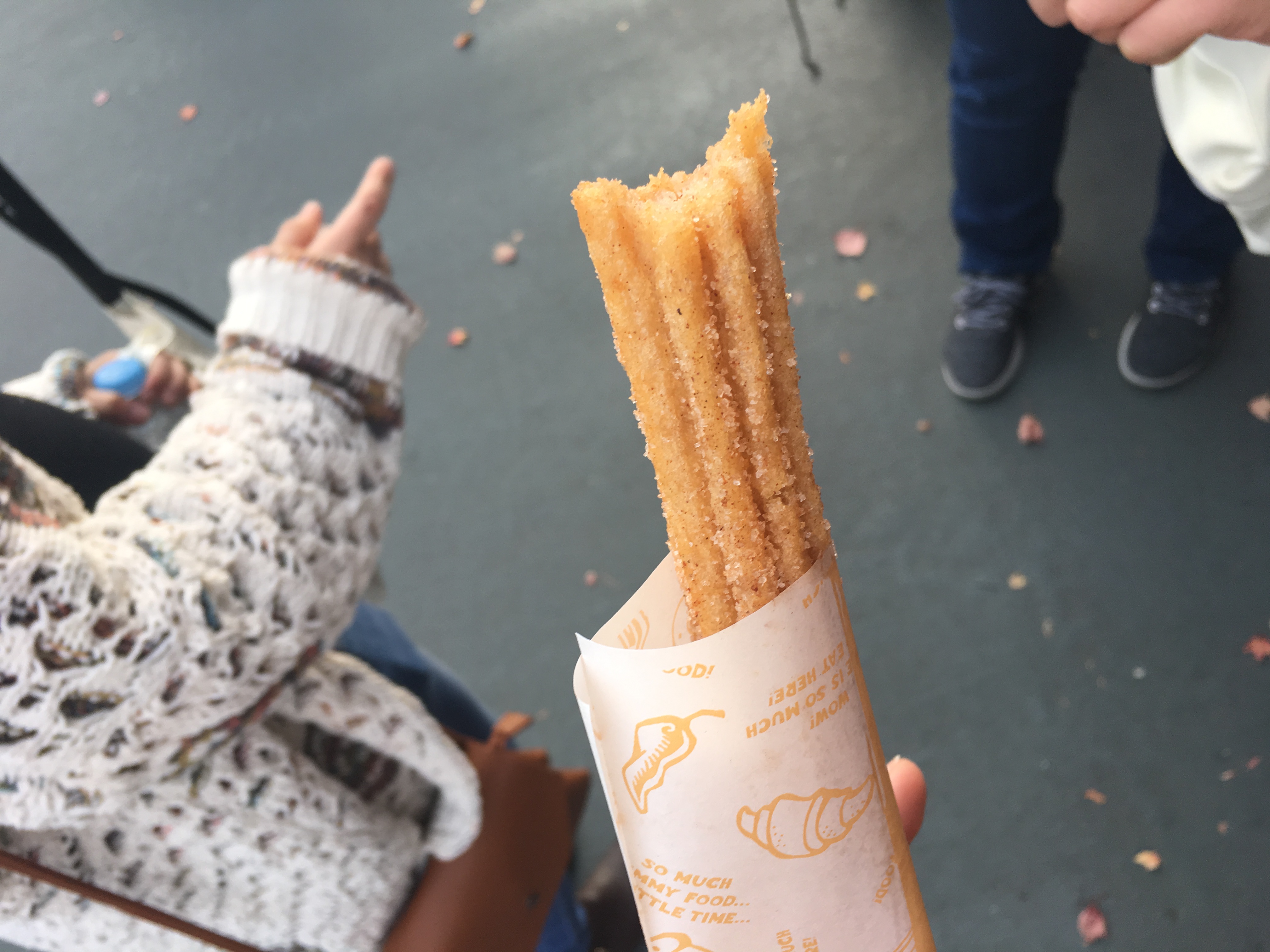 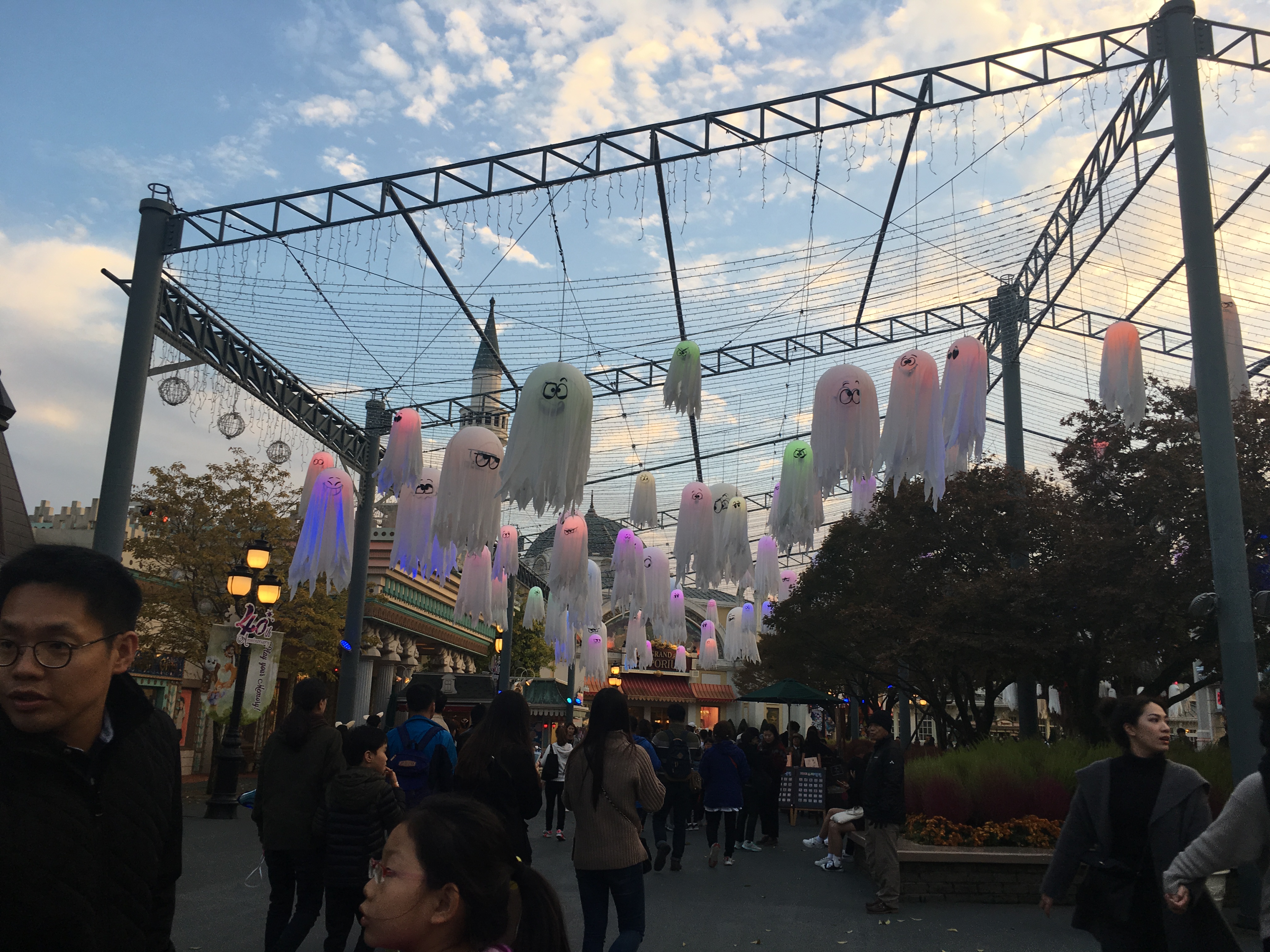 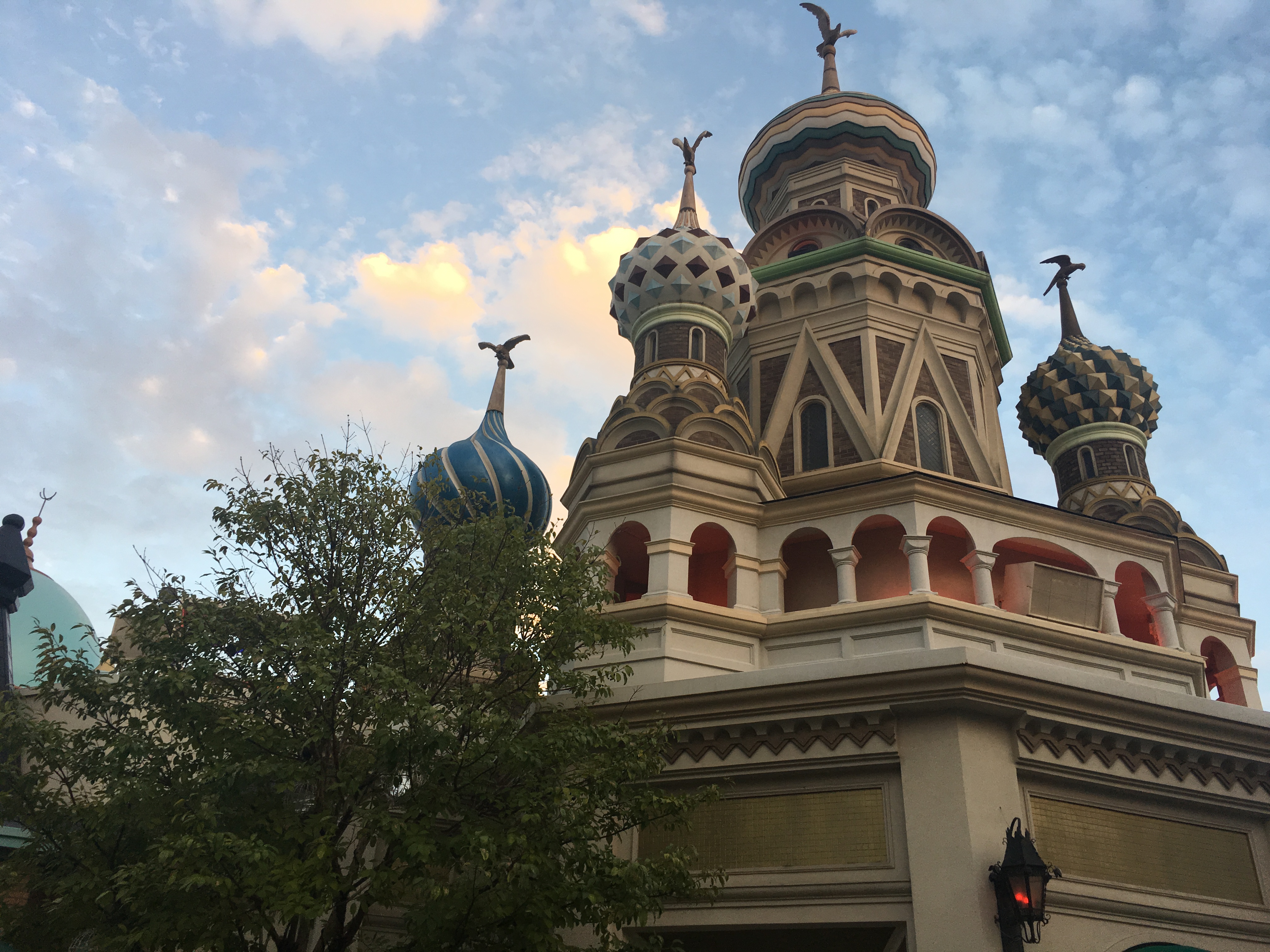 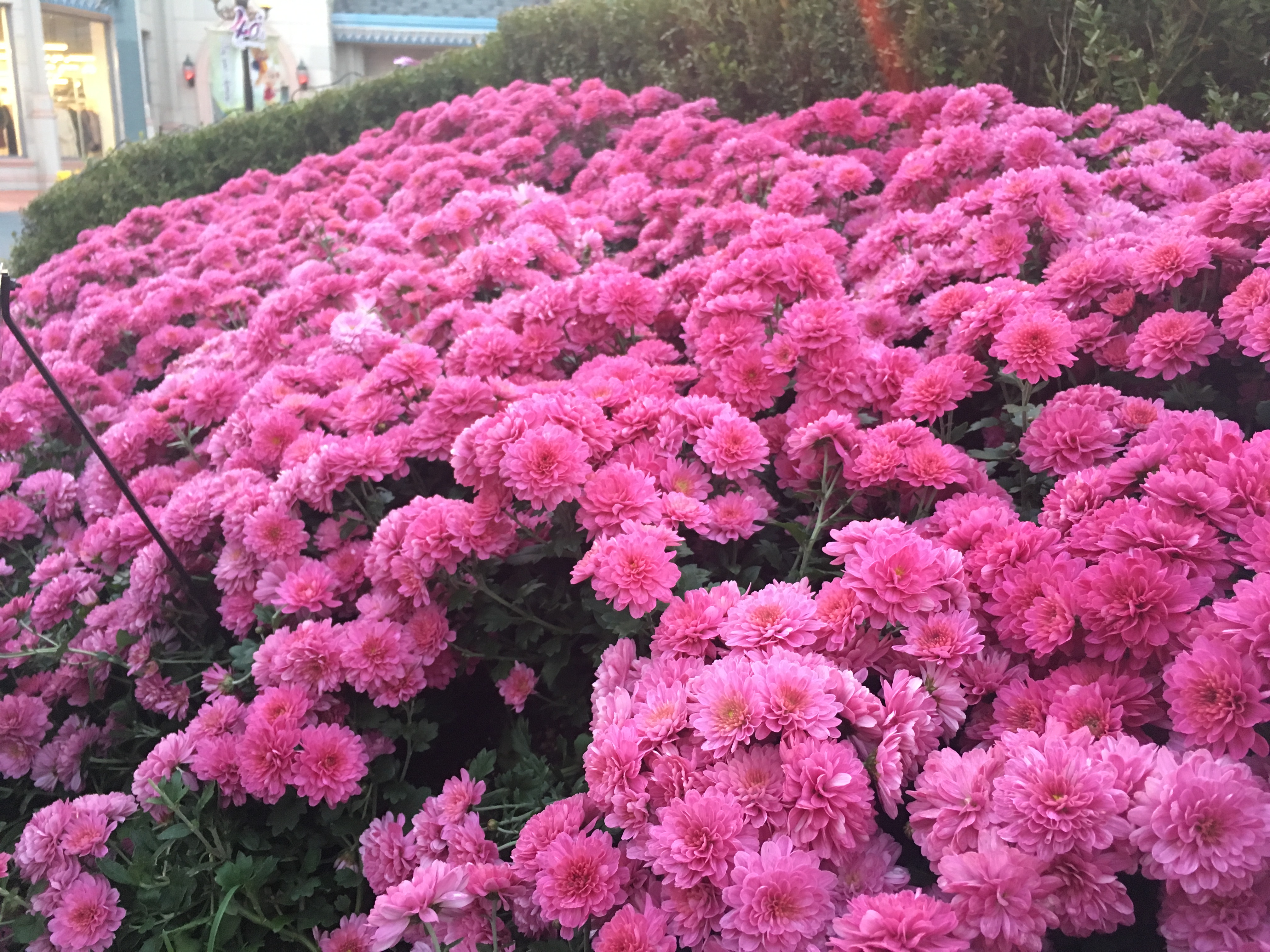 Looking back through the pictures, I found it hilarious that I went and gave all this effort to curl my hair, only to have a couple of failed selfies. 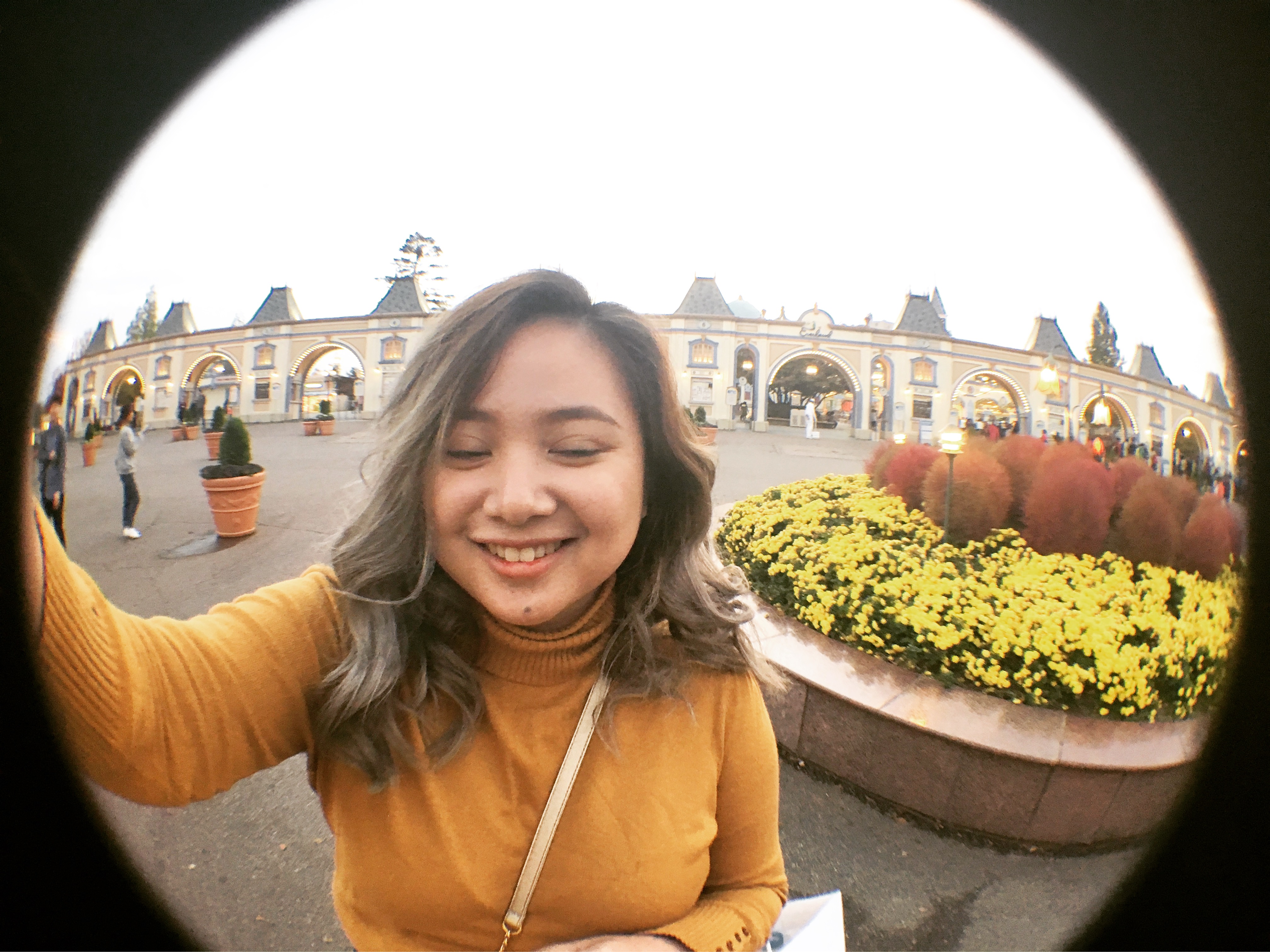 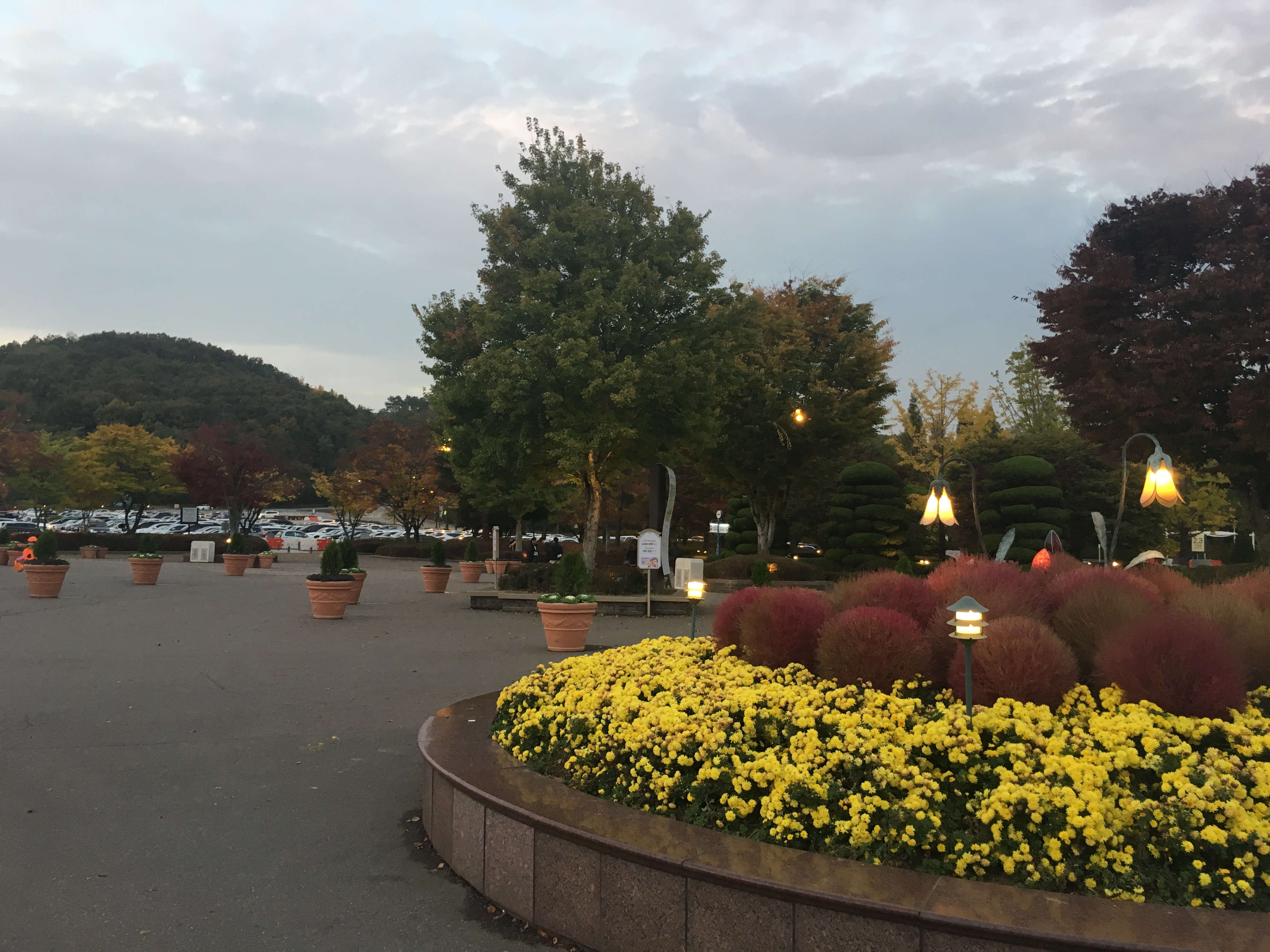 We got on a total of three rides on Everland. I’m still disappointed about it, but time constraints have always been a bitch on anything. The bright side is it has given me another reason to come back! 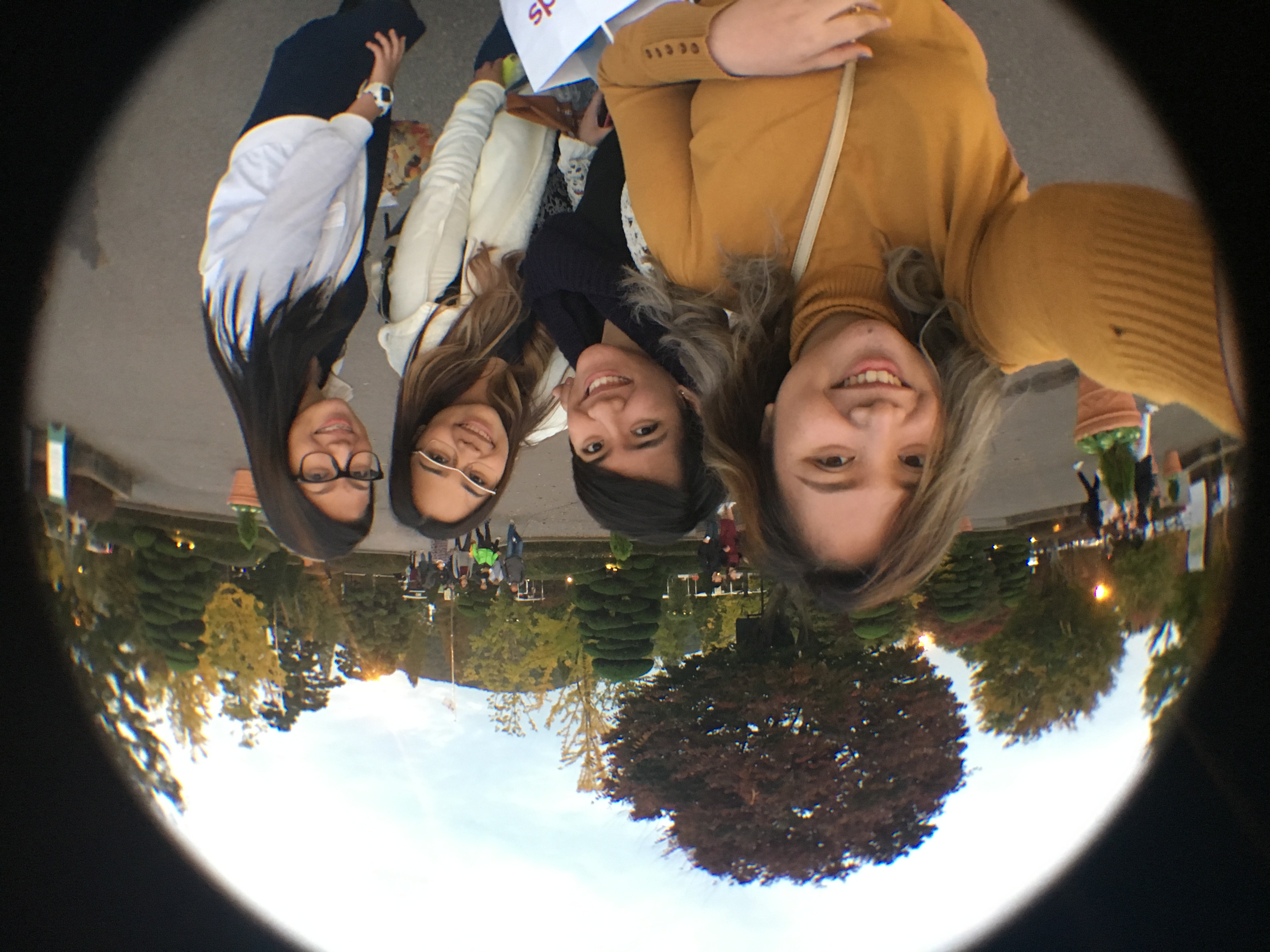 Once again, we found our way back to Myeongdong, which is where the shuttle bus dropped us off. We had been on the heated bus for over an hour and getting off the bus was like jumping inside the freezer. To say it was cold was an understatement. My teeth were chattering and all I could feel was ice cold wind seeping through my layered clothes. It was such a relief to find our way to another dakgalbi place (can’t get enough of them) for dinner. I did notice though that dakgalbi places always seem to have the ‘get your own’ banchan system. Oh well, that means I could get all the kimchi and pickled cucumber I want then. 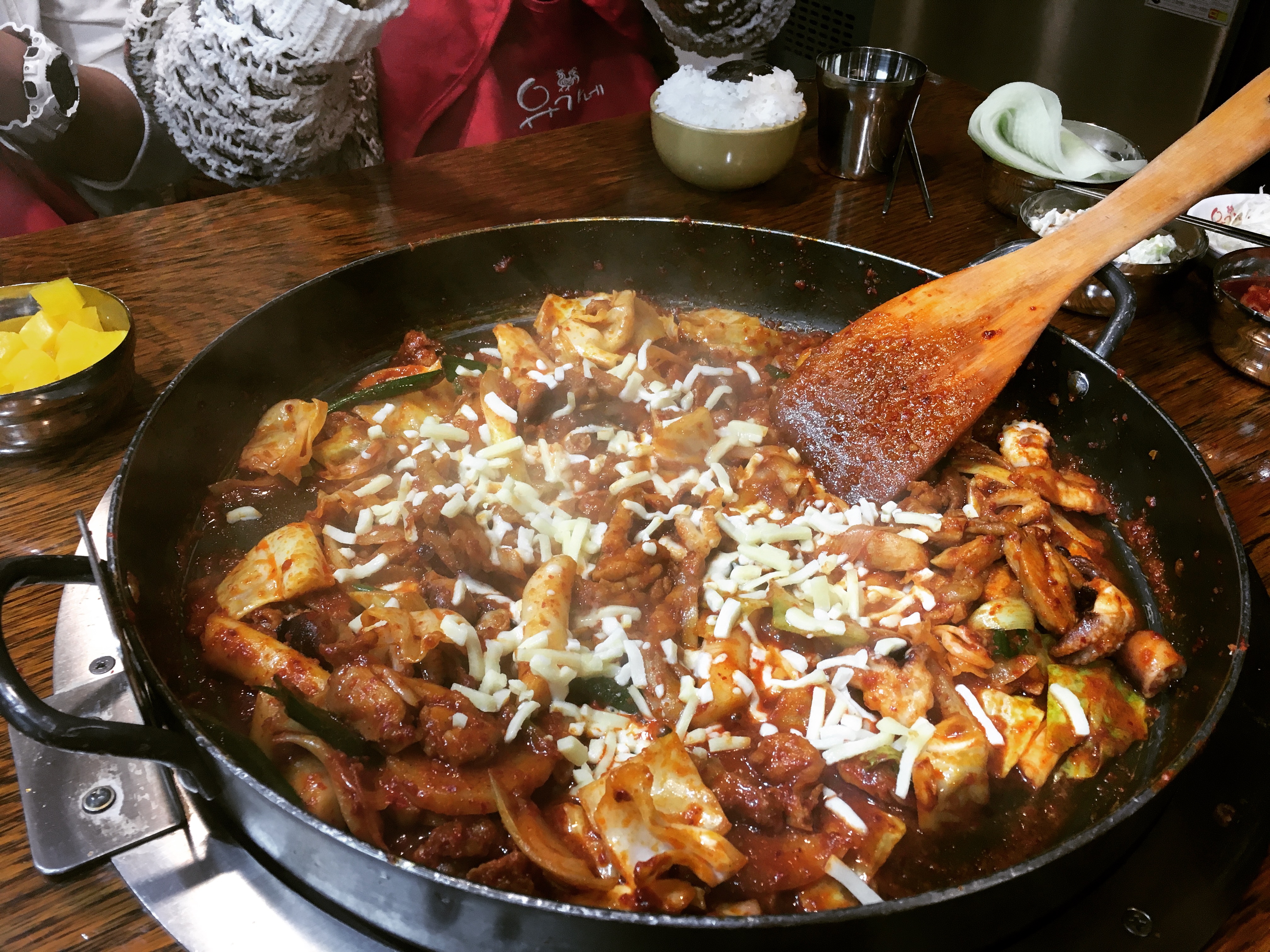 After dinner came another shopping spree (for Sean and Tin haha), while Jill and I ventured once more to the food stalls of Myeongdong. 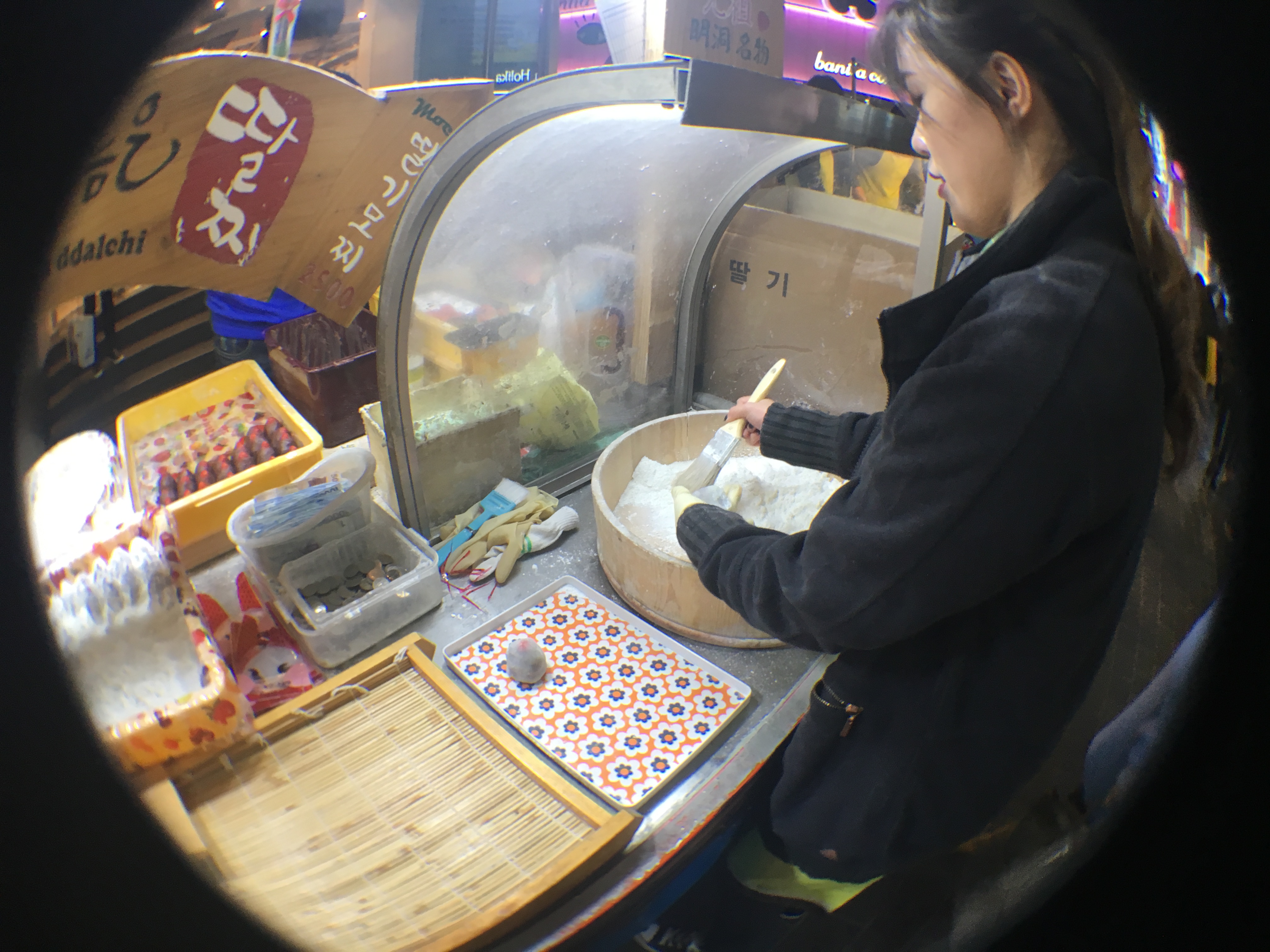 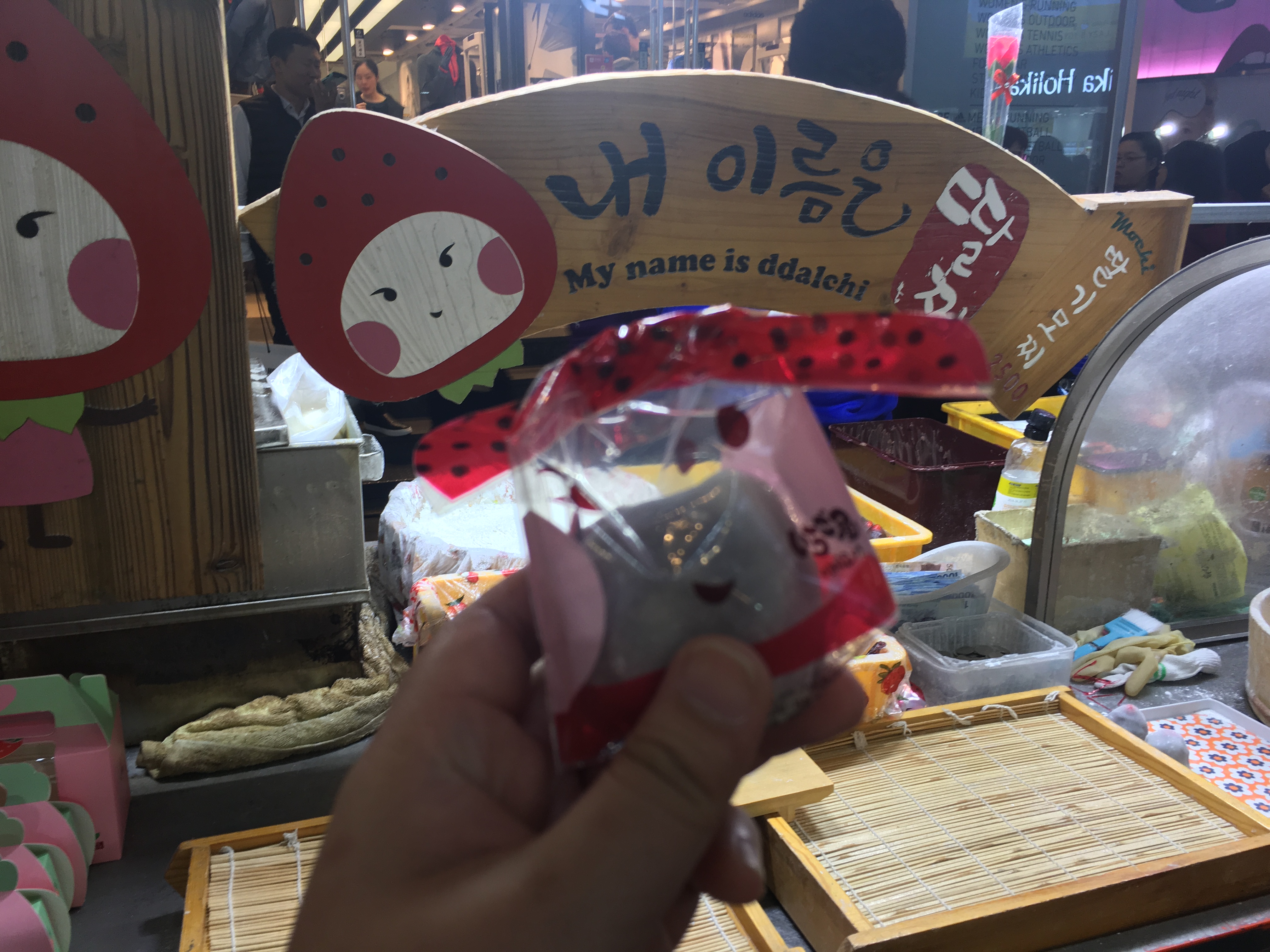 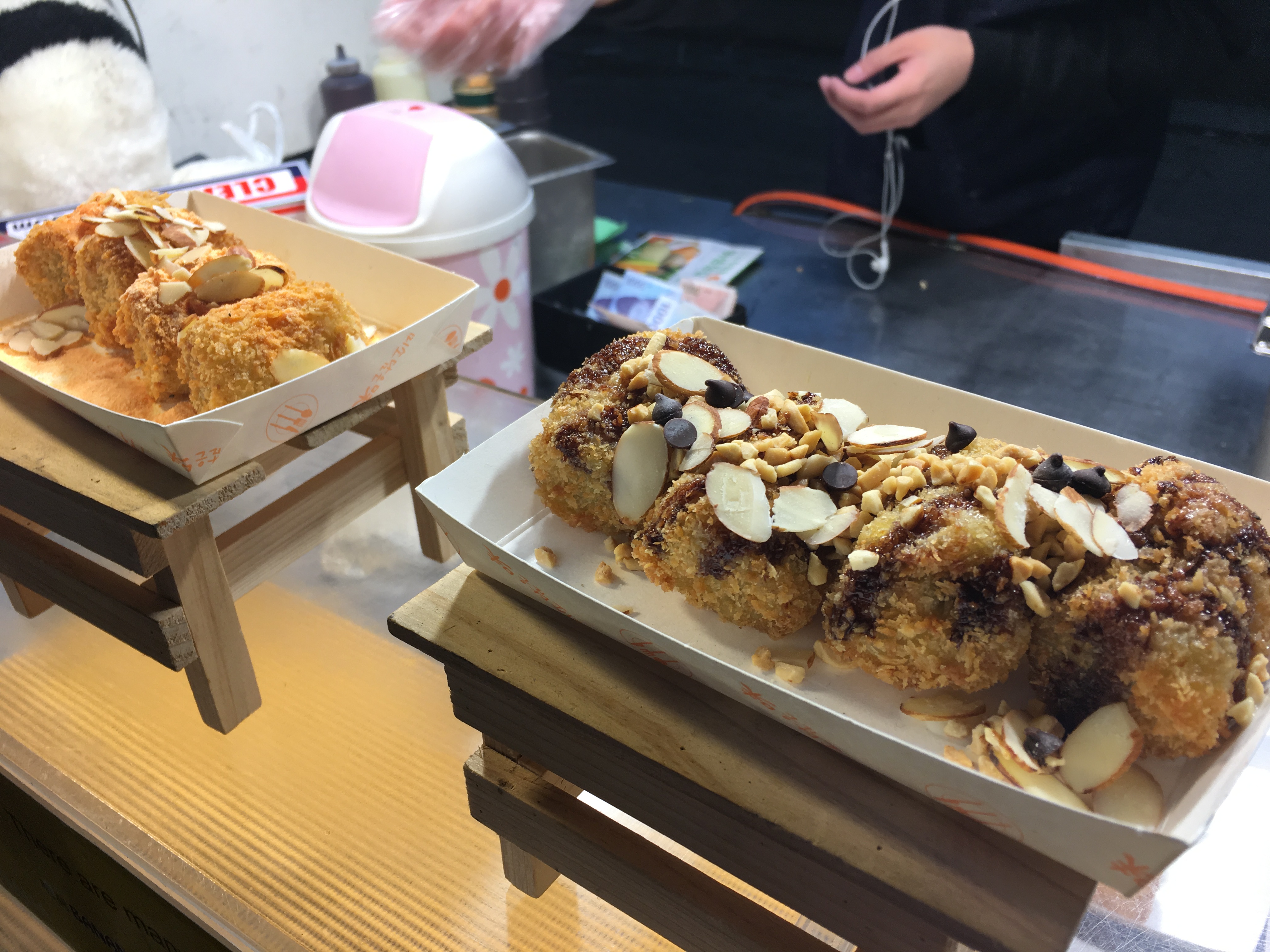 A comical thing happened to one of my friends which I can’t disclose, but it resulted to all of us heading back to the apartment earlier than we had to. As for me, I took the opportunity to bundle myself with another layer of clothing before heading out again. When we got back to Myeongdong, we ended up buying *drumroll* more socks and more food. Meanwhile, we kept seeing all the cute stalls selling costumes for kids. They were so adorable that I even asked C then and there if we could go have a baby soon just so I have an excuse to buy them. I did not give in to the temptation to purchase just about everything, though, so no babies for me this 2017. 😛 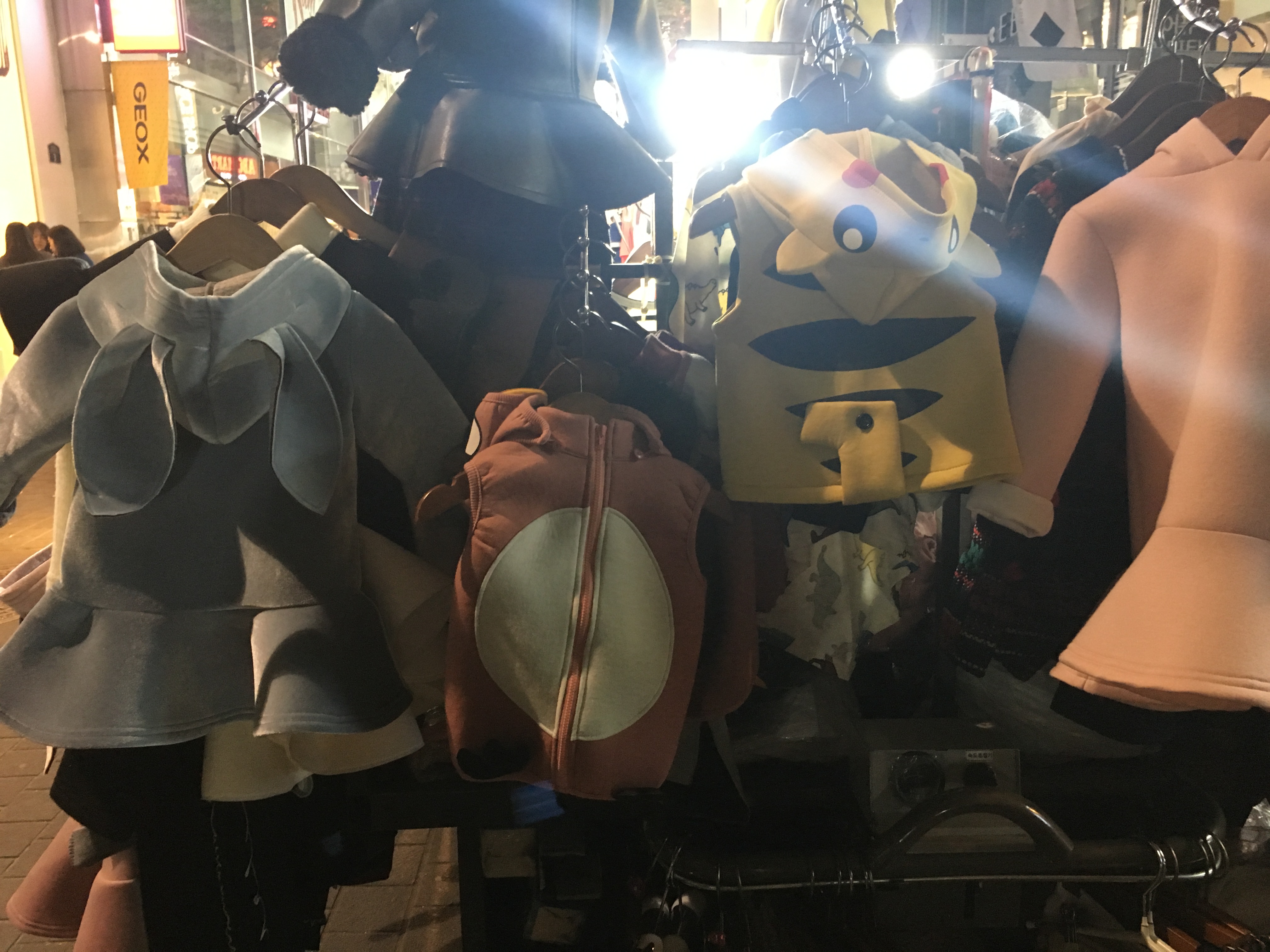 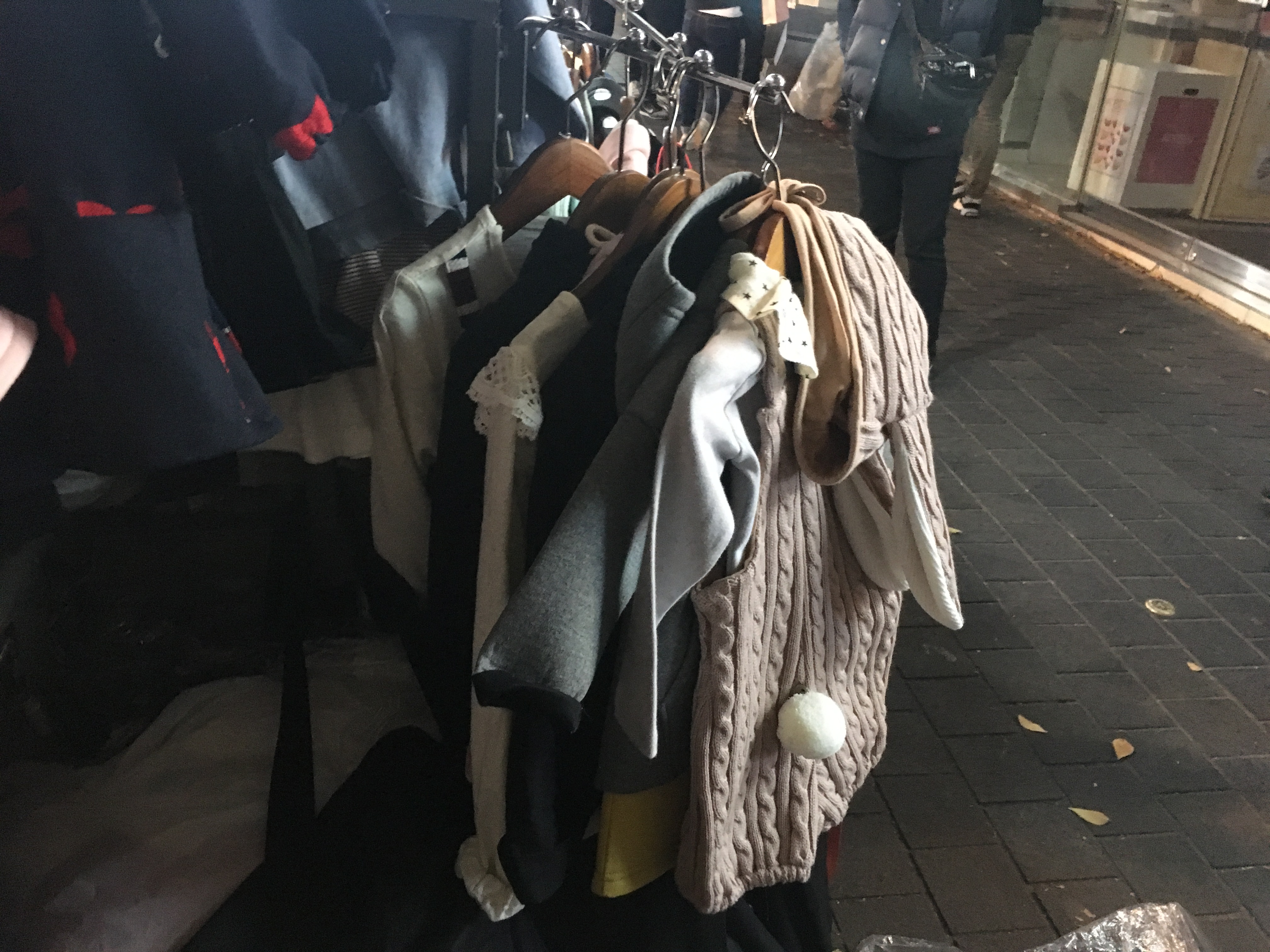 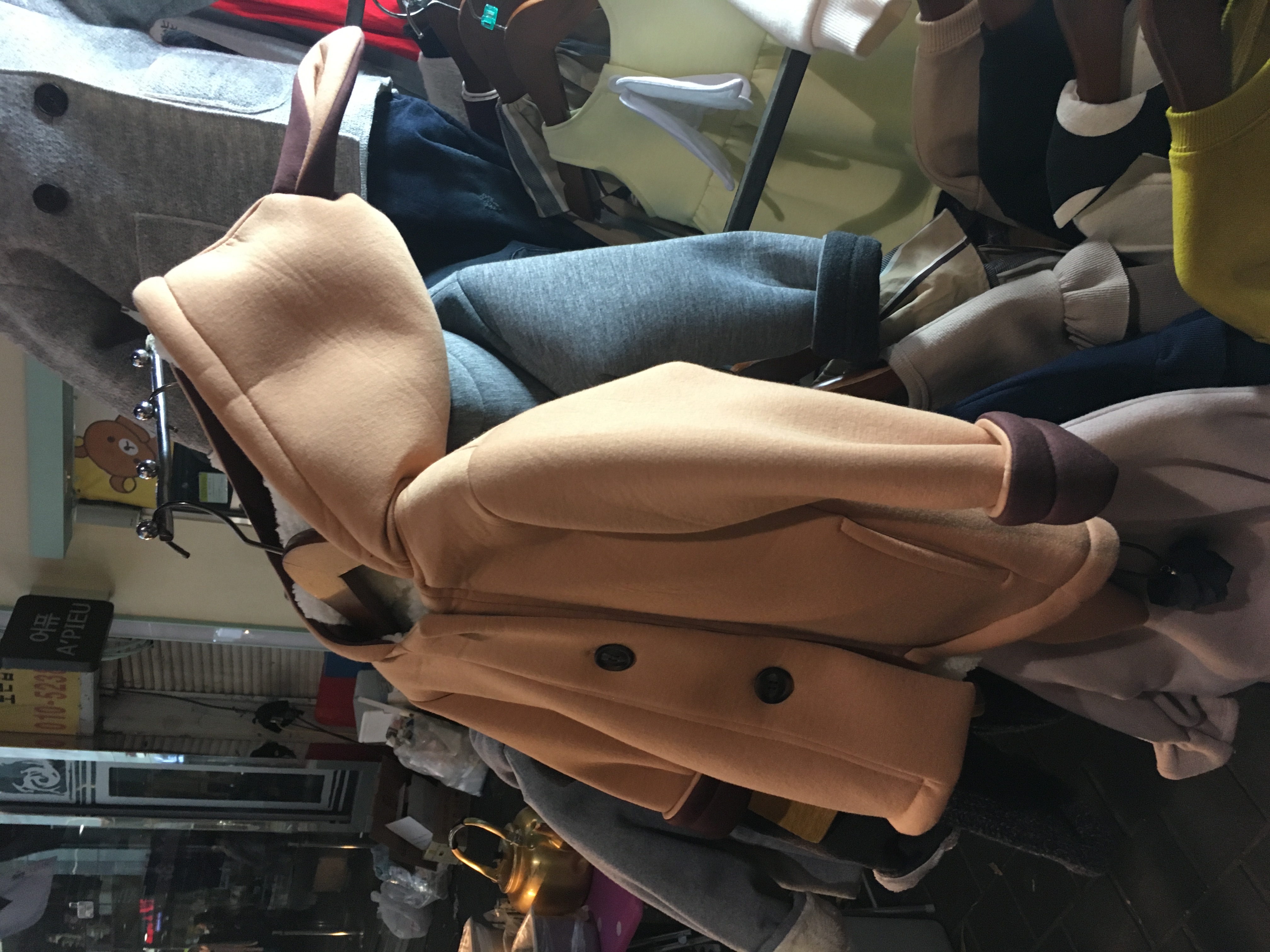