The holidays are here and I’ll be flying out in a few days (I’m writing this post in advance :P) for vacation. I set up a timeline for when I post these travel series and ended up with last minute vlog editing. Thank heavens that I don’t even do a lot of editing. I literally just threw in all the footage, added music (from the Boys Over Flowers soundtrack, no less because Korea), and voila! Not to mention everyone trying to squeeze in time to catch up and exchange gifts. I’ve had to decline most of them as 90% were dinners and I work the night shift. I also don’t feel like going to malls to buy presents during December. It’s crowded. The lines are long. The endless playlist of Christmas songs which wouldn’t be as annoying if they weren’t being played daily since September. You get the gist. I’m the Grinch. Christmas used to be a festive time in my life, but I’m just not feeling it for the past few years. Let’s try again next year, shall we?

The next thing that I want to have a go at is traveling with friends! It’s not technically the first time I’m traveling with friends, but this is my first international ‘friends only’ trip. I have always been wary of going on a friends trip because I’m not the most sociable person. I feel drained after spending a couple of hours with a big group (read above: my aversion to malls), and prolonged exposure to my [slightly] offensive brand of dry humor might ruin a good relationship. It is safe to say that I shoved those worries aside once faced with a seat sale I can’t refuse. Off to Seoul, we go then.

Being at the airport at noon was a new experience for me. I always book either red eye flights or crazy early morning flights. But budget fliers can’t be picky, and I was all set to depart for South Korea at 2 PM. Predictably, our flight got delayed for a couple of hours (thanks for that Cebu Pacific) and we arrived at Incheon Airport around 10 PM. First order of business upon arriving was finding a money changer and buying our own T-Money card. Research tells me that T-Money card costs less than ₩4,000, but when we bought it, we were handed the LINE version which cost more. For some reason, using the card had me baffled at times. I couldn’t quite figure out how much balance was remaining on the card and how much the fare was which is weird as I had no problem doing so in Singapore and Taiwan. Similar transportation card systems, but I’m not sure what’s wrong with me, man. Haha!

We took the airport bus to the city. It was probably one of the best buses I’ve ever been in, public transportation-wise. Comfortable seats with enough leg room that can fit both my legs and my small luggage. Damage to my wallet was ₩15,000 though, pricey but convenient.

We stayed in an Airbnb one station away from Myeongdong, and upon arriving, waited for our host at the bus stop. While we were packing for the trip, us girls were exchanging messages on what to bring. We checked the weather forecast and assumed it was accurate, which led me to pack clothes that were good for 19+ degree temperature. Guess who had to jump around trying to warm herself upon getting off the bus? Tsk tsk.

We just dropped off our bags at the room and asked to host to point us to the direction of Korean cuisine. Fortunately, there was a 24-hour noodle shop around the corner. The ahjusshi manning the restaurant was helpful enough to do a demo on how to properly eat it. Perhaps he was too helpful, because he watched over us eating and even cut the extra large kimchi with scissors while a thirds of it was already in Sean’s mouth. Haha!

We had peach soju with our meal, and ahjusshi decided to pour me the first drink. I’ve watched enough Korean dramas to know that it’s not appropriate to decline drinks from your ‘elders’ – I accepted the glass with both hands and did a little bow. Kamsahamnida! 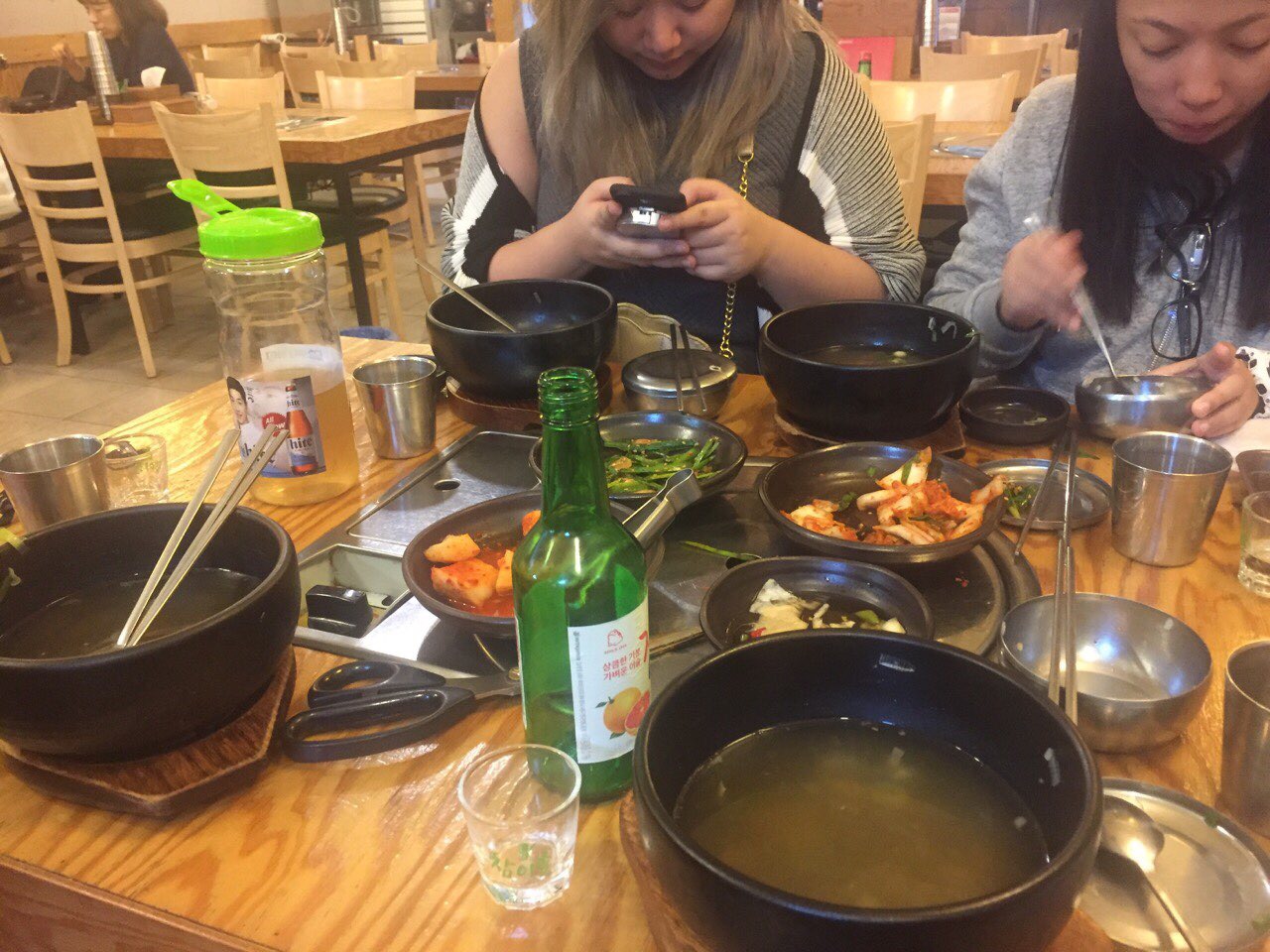 It was already nearing 1 AM when we decided to go to Dongdaemun. I have never seen any cosmetics store that were open during wee hours in the morning until I got there. Even the mall was still open! Life as a fashionista in Korea must be crazy awesome if you can go shopping in your pajamas on a whim.

To be honest, I’d go back to South Korea for their street food alone. We just had dinner, and there were too many choices that we settled on this ₩3,000 chicken skewers with cheese sauce. I’m drooling just writing about this. T_T

We spent an hour or two roaming around Dongdaemun, and the bulk of that time went inside Migliore. It’s full of clothes that I would have bought if only they carried my size. 😛

And that’s it for my first day in Korea. Four days is not enough time to spend in Seoul, in my opinion. I look forward to going back there with C (we already made plans as soon as I got home, talk about being excited).