I have been asked so many times the variation of the following questions: “do you not love your boyfriend?” (or vice versa), “don’t you have friends?”, and “why on your birthday??”. Often times, I just smile and say nothing and I will be met with the blanket statement of “so brave!”. It’s weird because I’ve interacted with solo male travelers and they don’t get those questions as much as I (and other female travelers as well) do. People also assume that I’m outgoing and friendly, when in fact, I am painfully shy. I don’t even know how to make friends in hostels! People never notice because it seems I have no qualms talking to anyone at work, or even with strangers. What they don’t know is the anxiety I have to battle with every single time I go on a conference call or a board meeting, and the thoughts that run through my head when I talk to a new person. Traveling solo requires talking to strangers, either for help or to make friends, and I like that it pushes me out of my comfort zone. 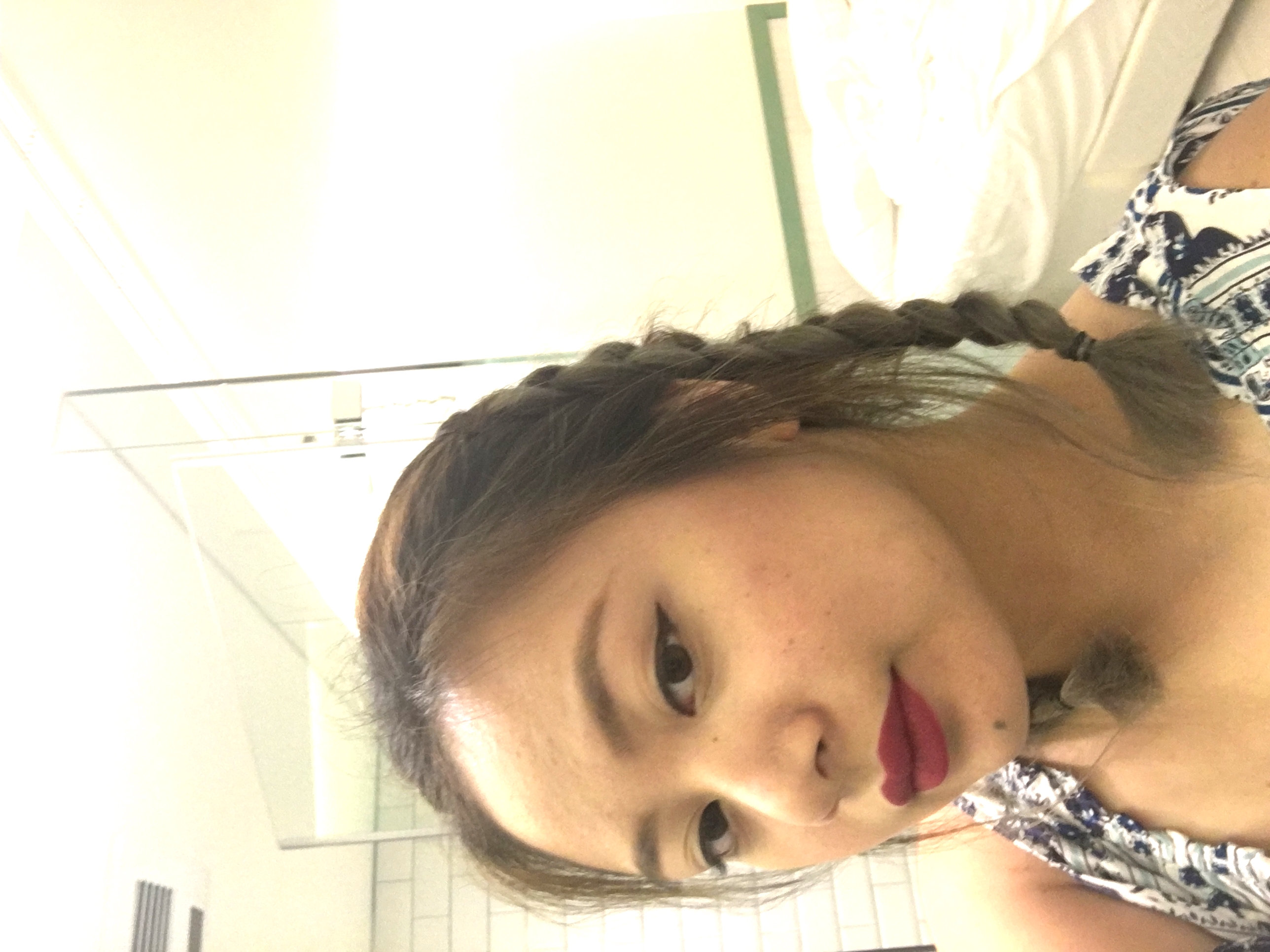 I treated this solo travel as a birthday gift to myself. The past year has not been the best for me and to be completely honest, I have been living most days on autopilot. When we lost mom to her almost 3-year battle with cancer, I didn’t really have the time to grieve. There was the funeral to plan, the legal documents to file, the house to maintain, and all the things mom used to do fell on my shoulders. I used to live my life for me, and even though I love my siblings, making decisions was harder now that I often take them into account. I was more stressed than sad (gained more weight because I’m an emotional eater). It didn’t even sink in until 3 months later after she was gone. I was on a bus, and I was researching on how to file annual taxes when the first thought that popped into my head was I’ll go ask mom when I get home. Then I realized she wasn’t home, and that I wouldn’t be able to talk to her again. Whatever was keeping me together disappeared, and I literally full on started to ugly cry. On a bus. Headed to Cavite. Yep, not one of my best moments. Now add this to the fact that when I was thinking of what to do on my birthday, I couldn’t help but remember that my mom always threw me an intimate party of some sort. It usually is a surprise. There will be no surprise birthday parties for me this year. None of my mom’s salty birthday carbonara, my room wouldn’t be filled with balloons she inflated herself, and no blowing candles at midnight. The thought of it alone made me want to get away. 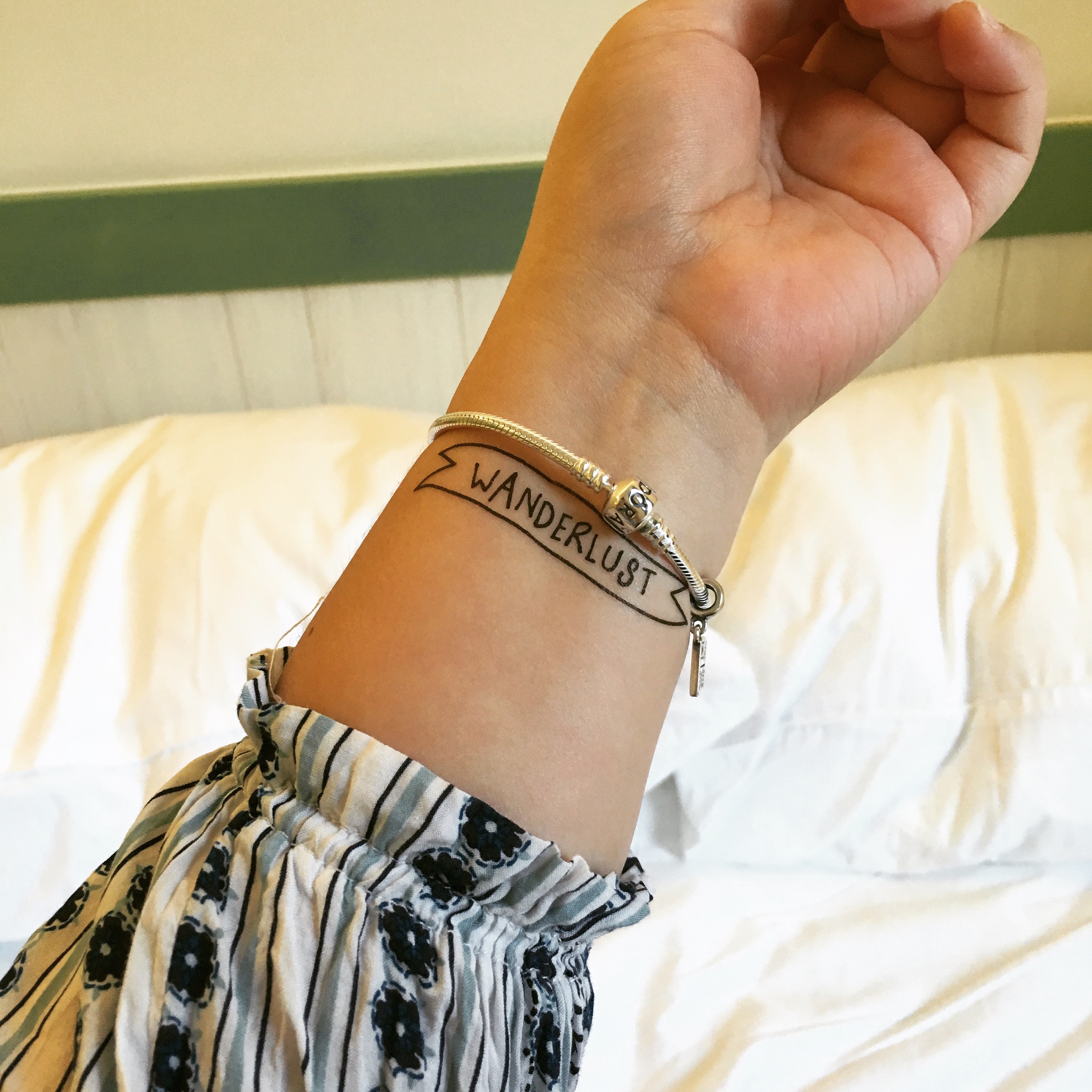 I still feel like myself most days, even if circumstances push me to adjust for other people – making sure I work well with teammates/letting go of the ‘cool older sis’ attitude for the ‘proxy mom’ one/compromising with C to get him to fit in perfectly within my world (he does the same with me)/etc. But traveling alone gives me that space to disconnect with people and not care about anyone else but myself. Cliche as it may seem, the silence that it comes with calms my soul and fills me up again. I come home with more to give to the people (and things) I care about. 🙂 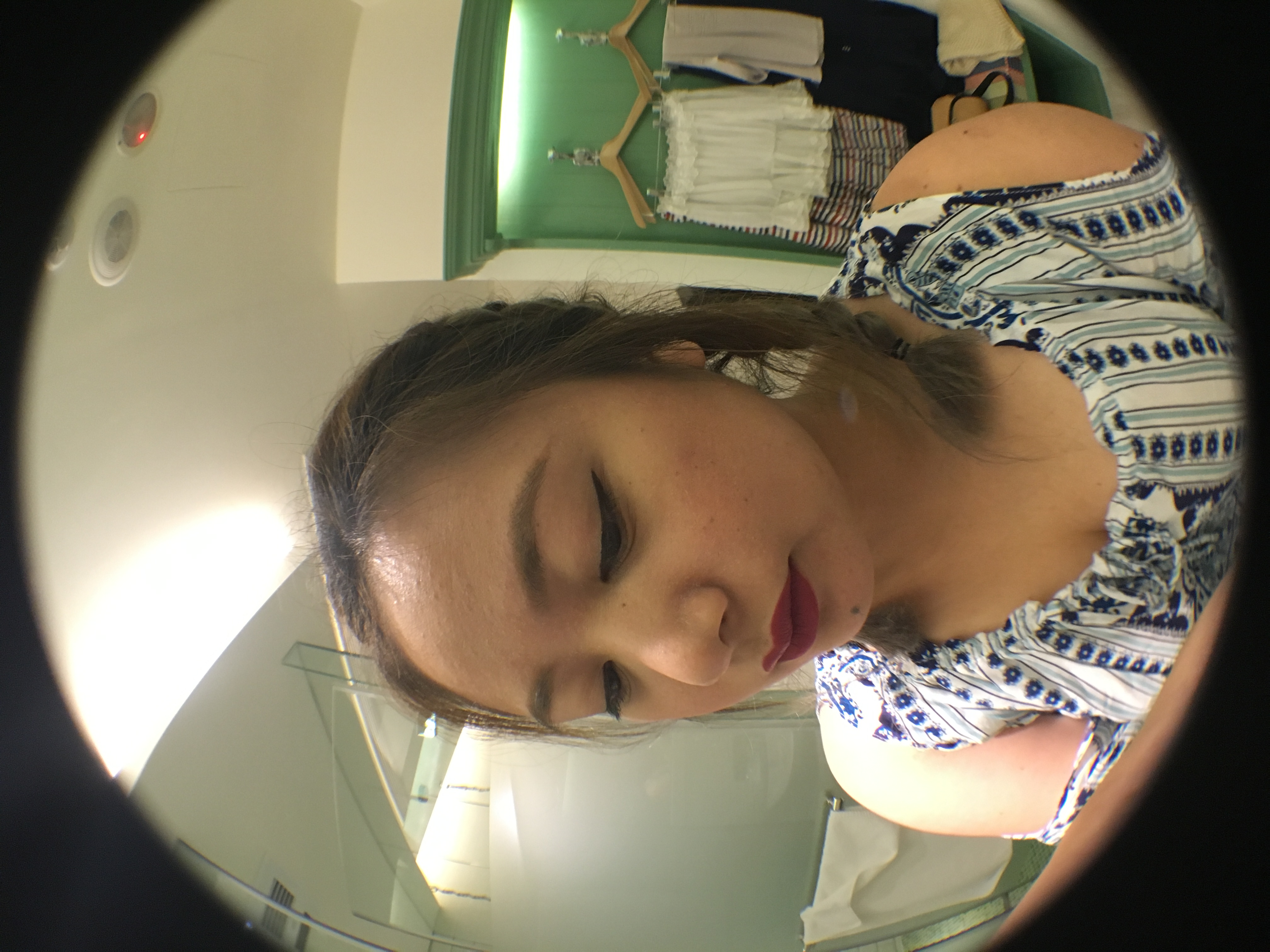 THAT WAS SUCH A DRAMATIC INTRO. I was gunning for a short explanation on why I decided to travel alone on my birthday, but I got carried away and it turned into one jumbled mess of thoughts. Haha! I started my birthday with this fabulous breakfast (at 8 AM, no less), from DG Hotel’s DG Cafe. It may not look like a lot, but the serving was huge! 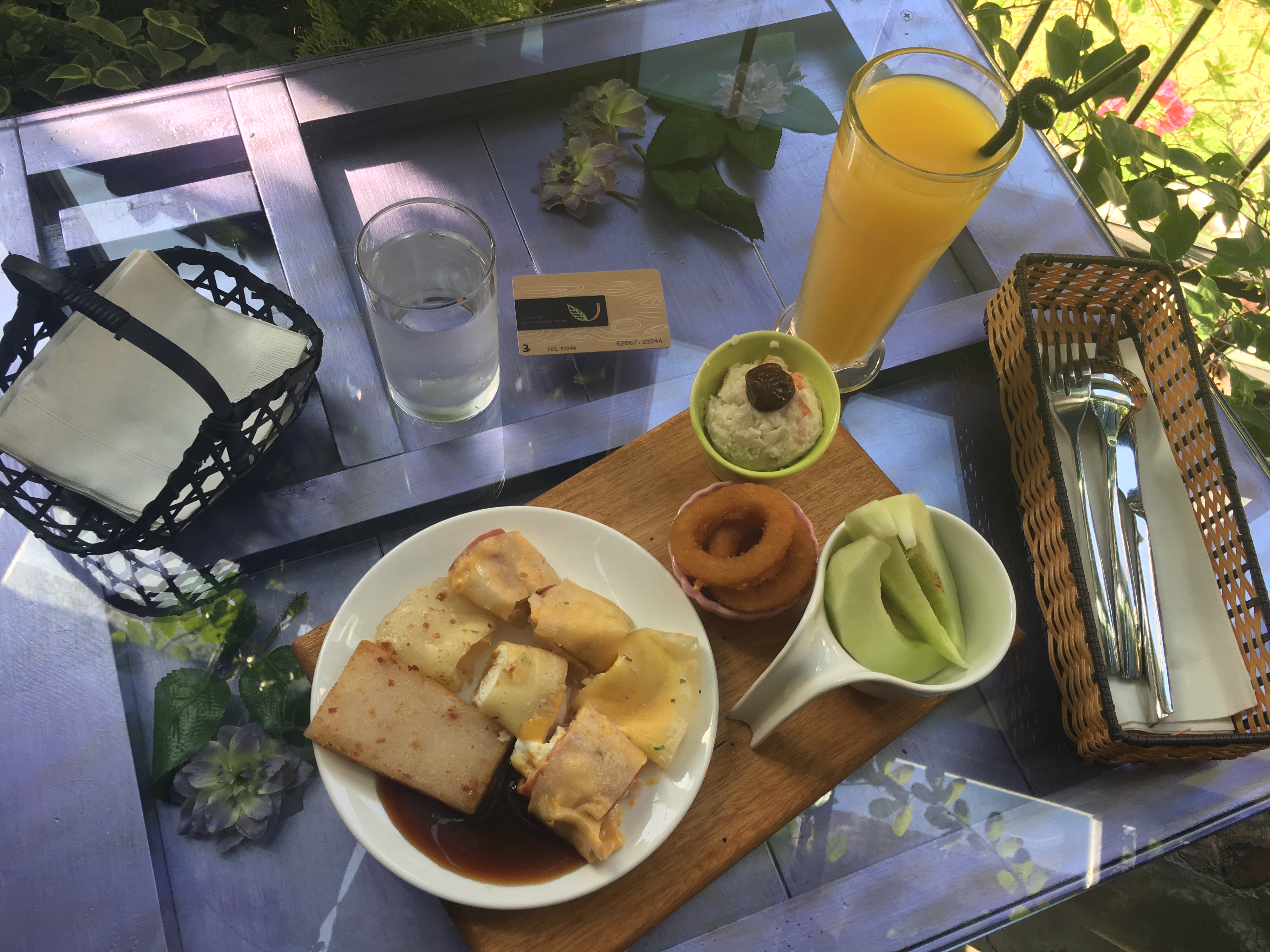 I didn’t really know a lot of tourist spots in Taipei, but I knew that you can go paragliding here. After breakfast, I called Mustang Flying Club in the hopes that whoever answers the phone could communicate in English. There weren’t a lot of resources (by that, I mean blogs) available that was very helpful in how to go about booking the paragliding activity in Taiwan. Tricia Wong’s blog post by far was the best out there so I linked it up (and listed it below as well), in case anyone is interested.

How to go paragliding in Wanli: 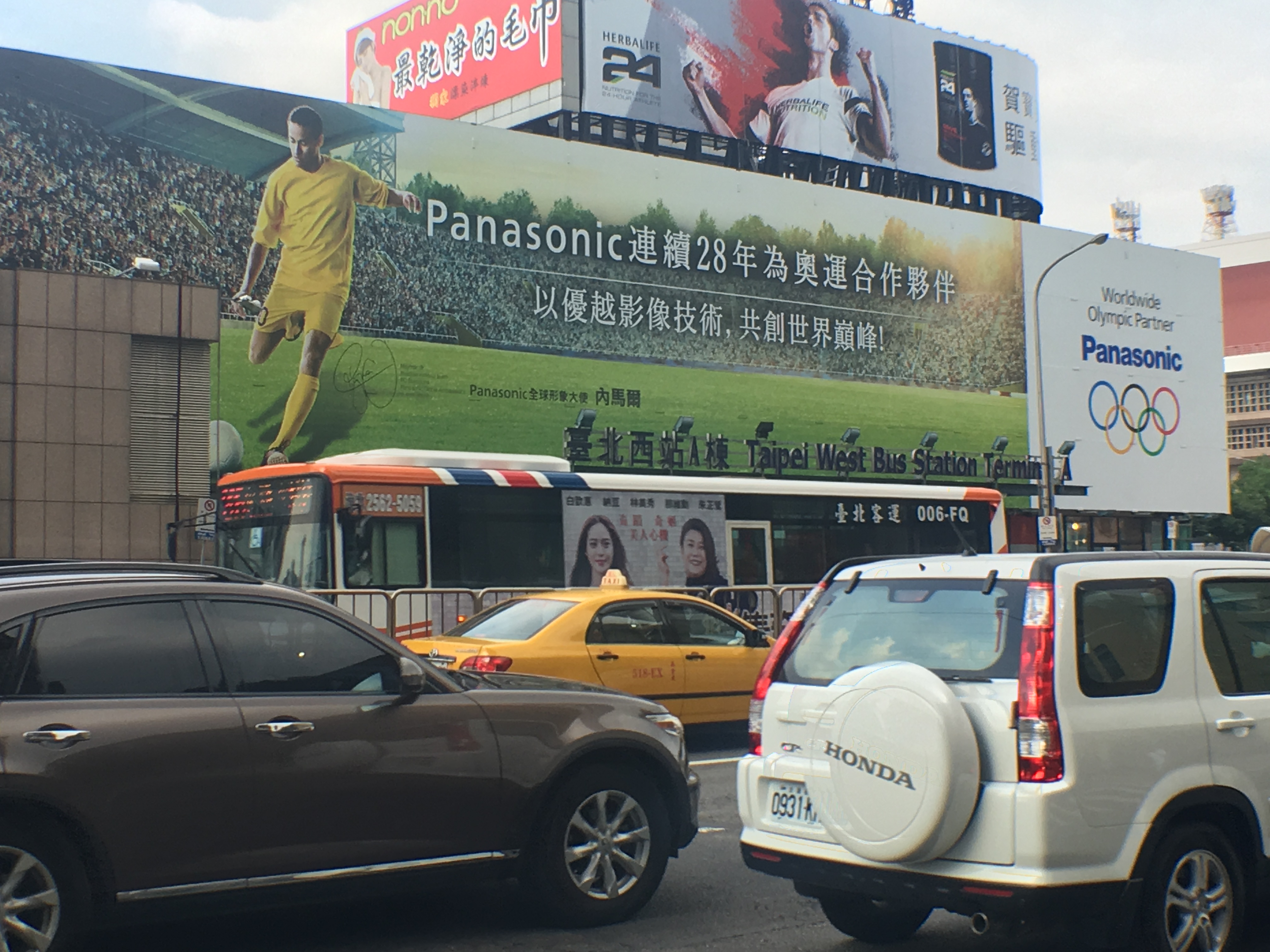 It was so much fun watching people go paragliding. When I got there, I was so excited for my turn – which came in roughly two hours later. 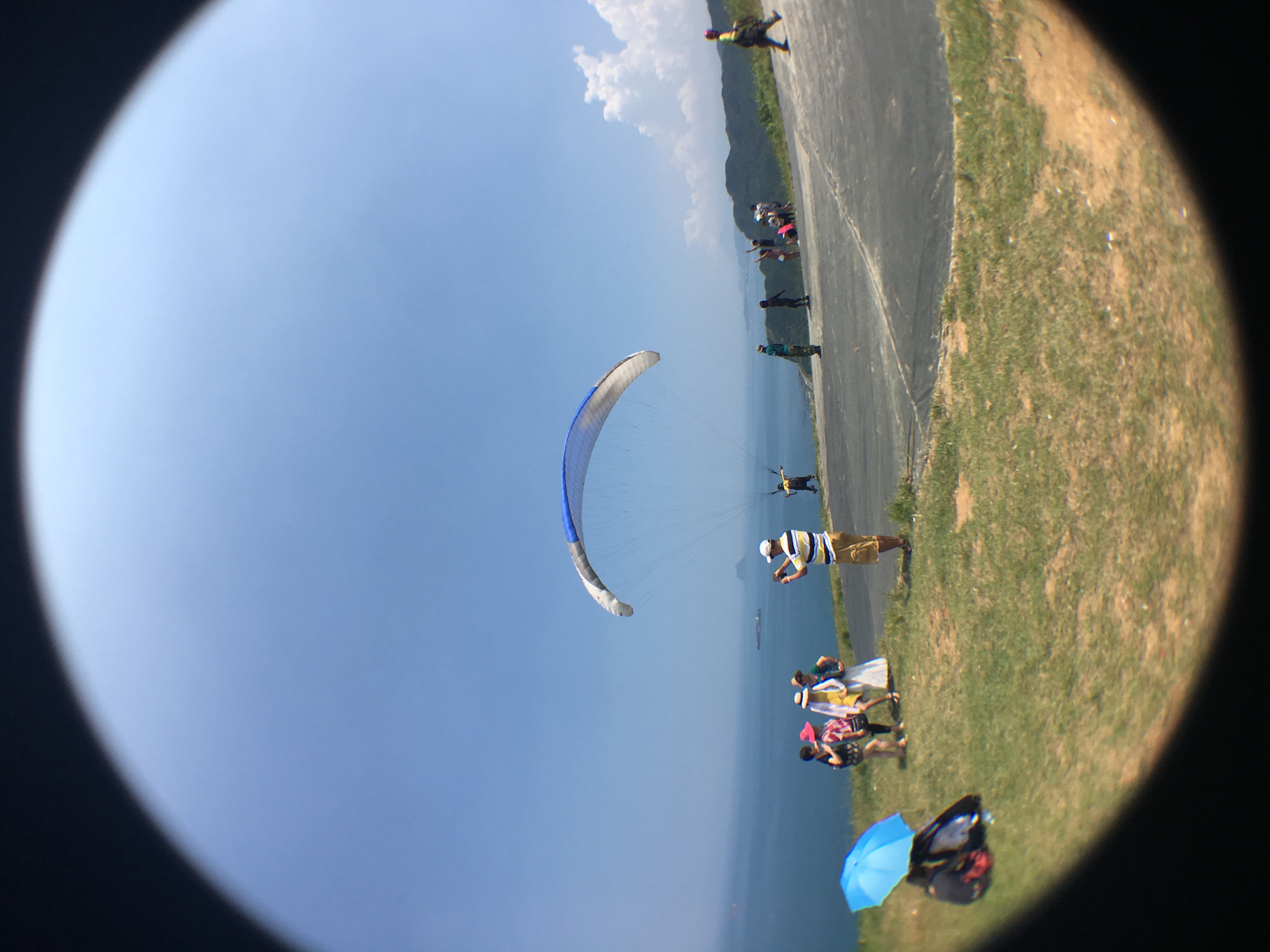 Wear comfortable clothes when you go paragliding, and make sure your knees are covered. They do lend knee covers if you’re wearing shorts or skirts. But why would you do that when you know you’re going to go paragliding? 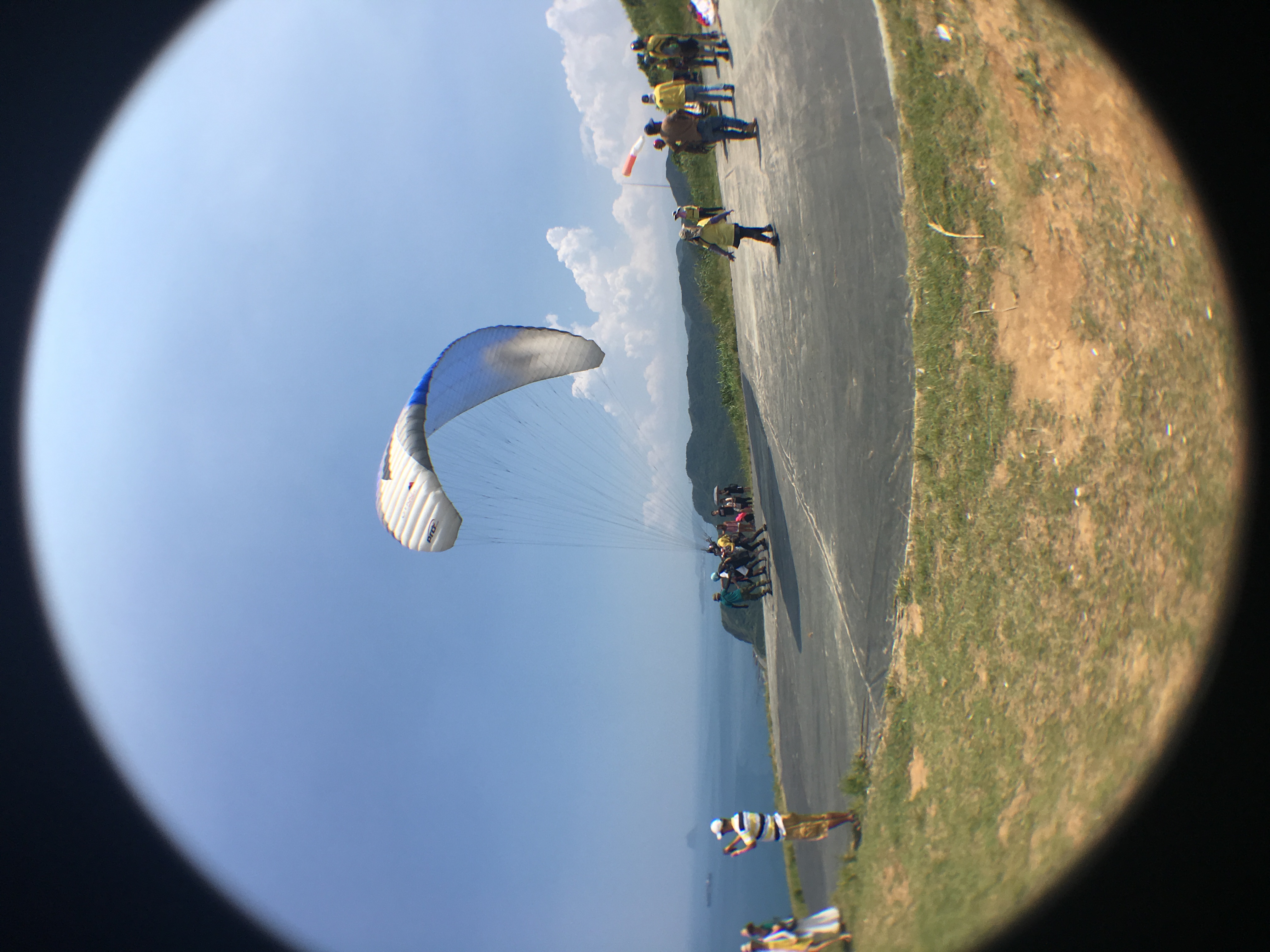 The view from the top was very relaxing. It was sweltering, though. Bring lots of water (and food) because you can’t buy any within the site and there aren’t a lot of seats in the ‘waiting area’. 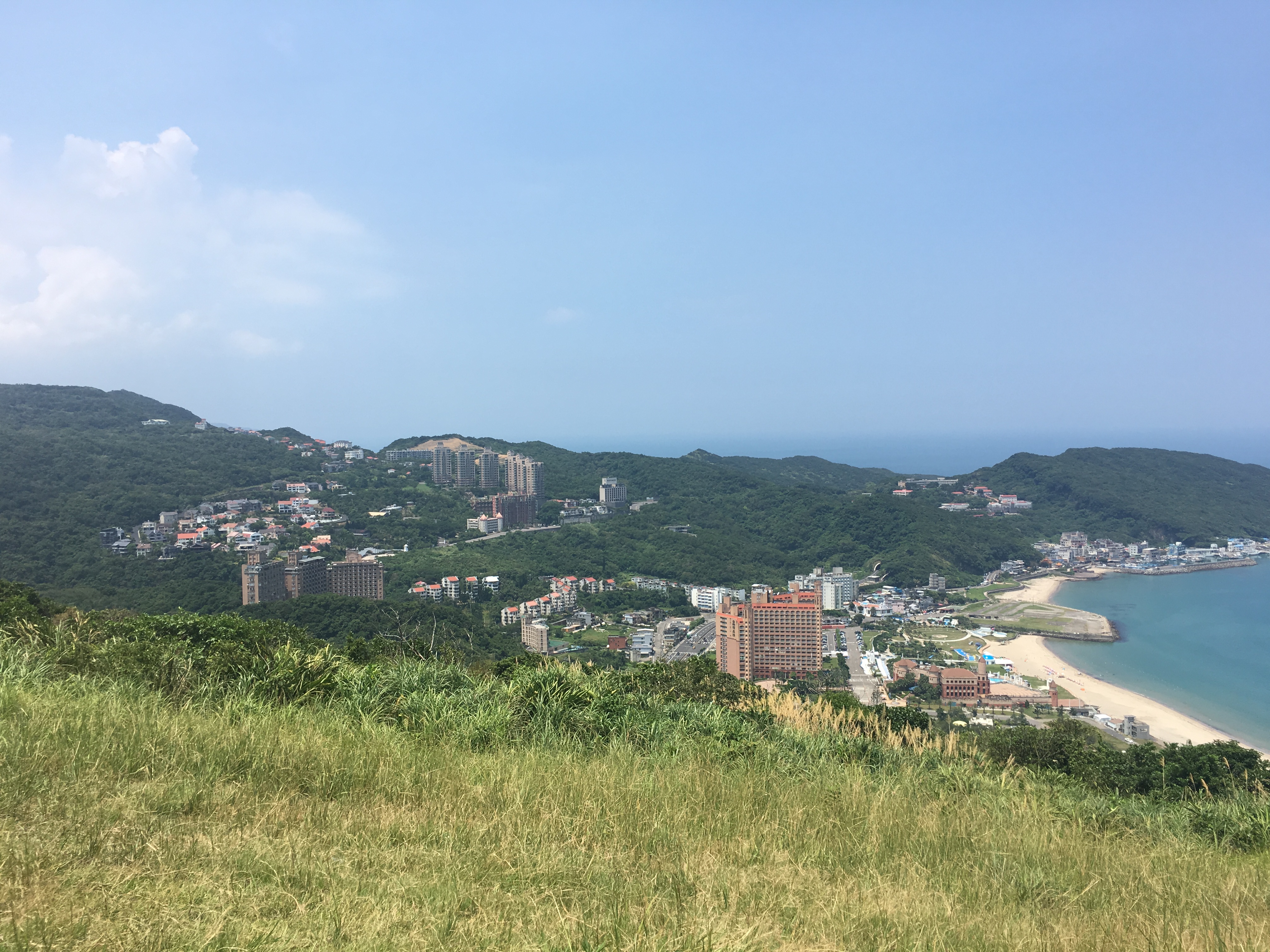 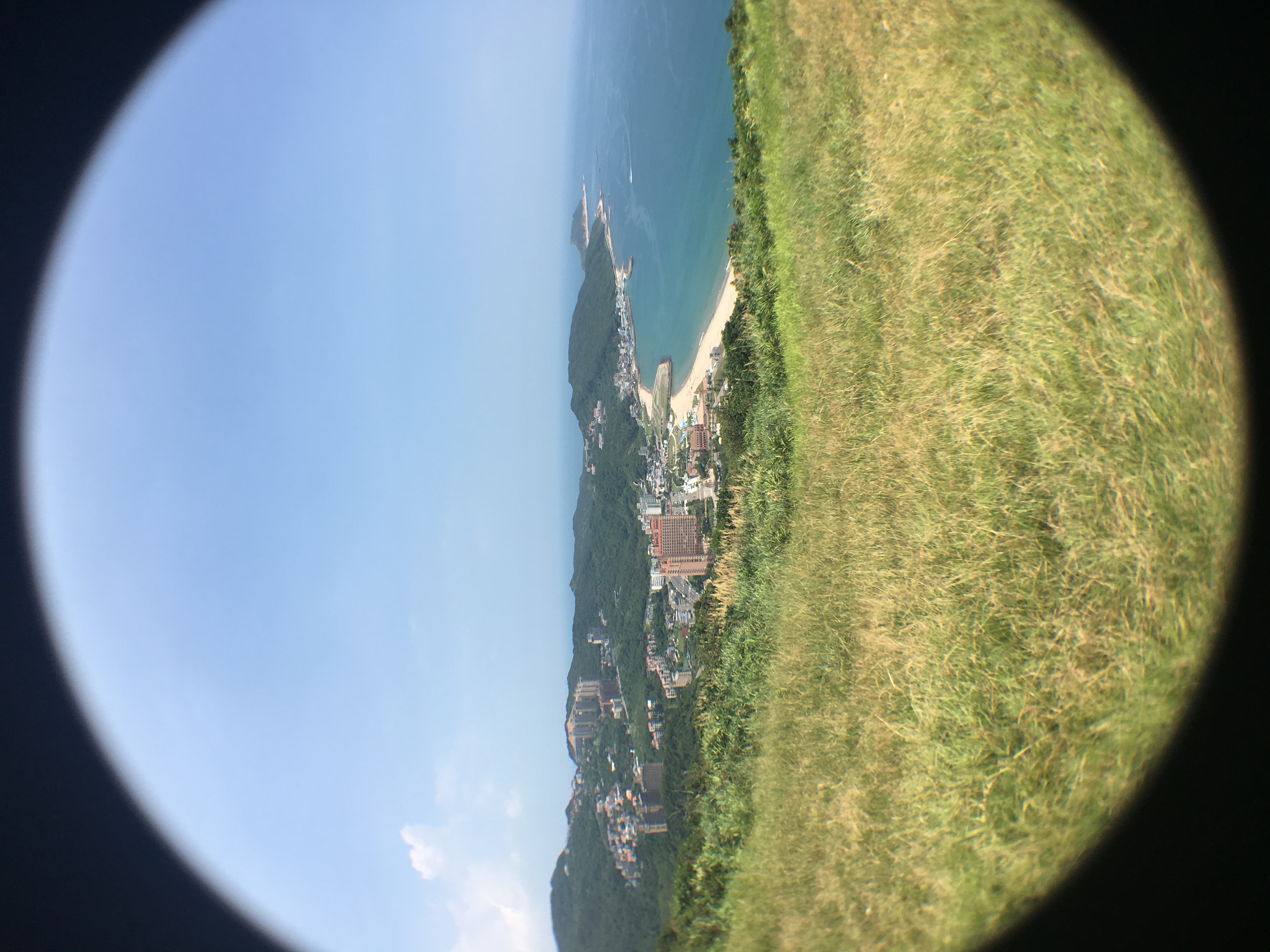 The nerves came in once I started walking to the cliff I was about to run off to. The instructions were to keep your legs straight and just keep running until you’re on the air. Do not bend your knees, or jump. I’ve written about this so many times – but physical activities could literally be the death of me. I am clumsy enough that my friends even made a couple of hashtags just for me, #TumbaTuesdays (Tumba is the local word for ‘to fall down’) and #SemplangSaturdays (Semplang means ‘to slip’). There was a time in my life where I tripped/fell down 4 consecutive Tuesdays. The sibs even tease me that I should name my scars because I always have one as a souvenir lol. 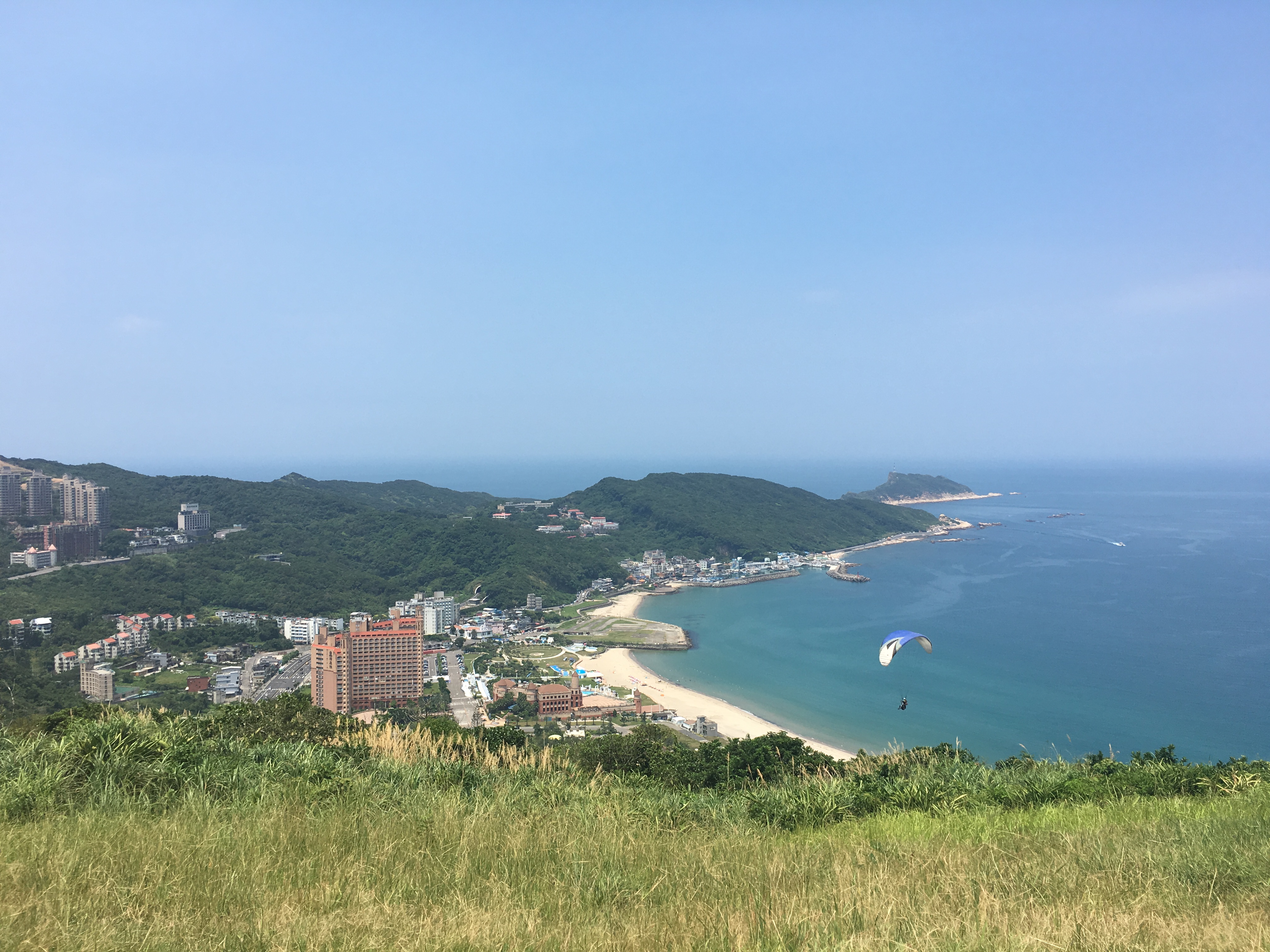 I guess it came as no surprise when my first attempt to paraglide had me falling face down on a hill. I had a sweater on but I gained bruises and cuts all over my arms. The brand new jeans I bought from Uniqlo before the trip got ripped, and I had a brand new set of scars in the making. The video is at the bottom of this post! My sister kept laughing because, in the raw video (my face had this terrified and uncomfortable look 90% of the time while paragliding), you can see the staff even teaching me how to run. Haha! 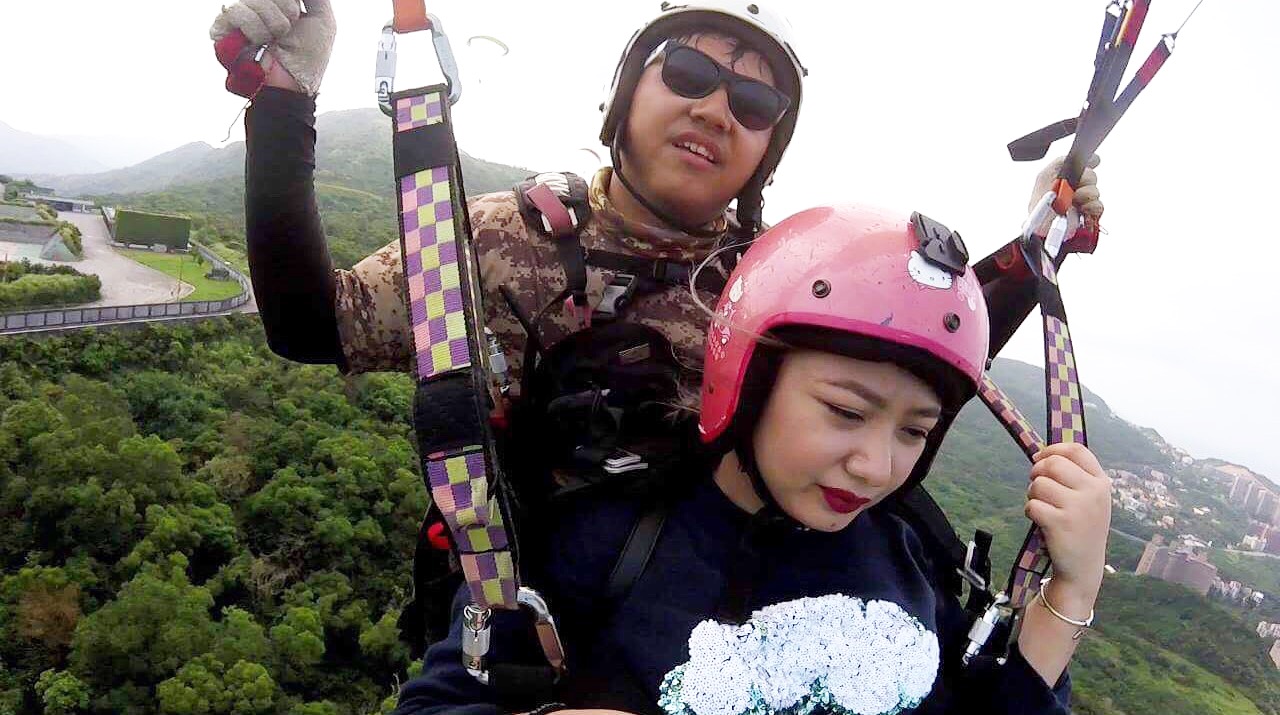 The harness I had on was pretty uncomfortable, and I thought that was usual for this kind of things. I found out later on that it shouldn’t be the case. It turns out that it was too small for me which is why I couldn’t sit all throughout the flight, and why it was too tight on my legs. The wind was so great for a day where they thought it would rain, and we could go on a longer flight, as per the instructor. He was surprised when I told him that no, I would prefer to land now because I felt too constricted. The harness was in all the wrong places – and after a day, bruises started showing in where the harness was. 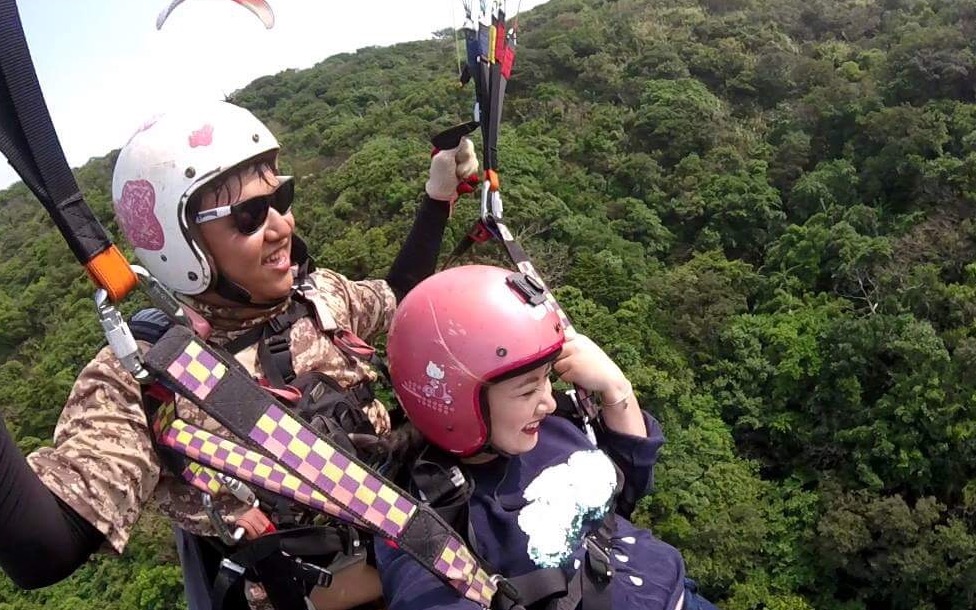 It hasn’t turned me off paragliding, though. I would like to try it again, but maybe somewhere else where I can easily communicate. 🙂 Here’s a photo of my jeans and feet while on the bus back to Taiwan. The four women who flew before me was also in the same shuttle back to the bus stop. Two of them started shaking the dirt off me (they’re from Hong Kong) while someone checked me for bruises and generously applied ointment. It closed off my wounds by the end of the day and stopped the stinging immediately. Whatever that is, I think I need one for myself. 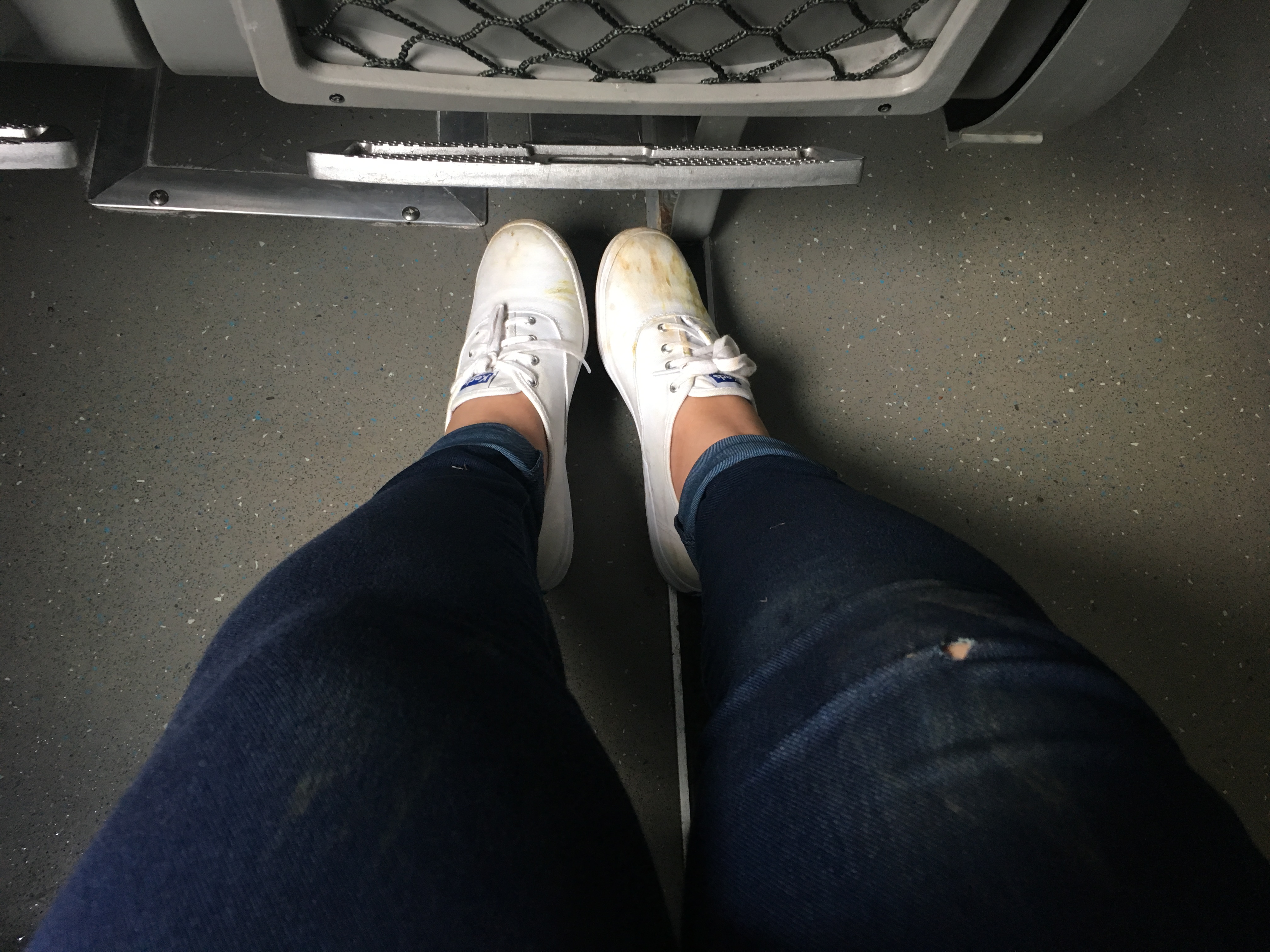 I got back at Taipei Main Station around 4 PM. I walked around within the vicinity and entered this really huge H&M. The clothes were cheaper than the ones sold in the Philippines, but my wild guess is it was because the sizes were all in XS and S! The reason why I even went in the first place was because it was a western brand and I needed bigger sizes. Haha! I did find this cute skater skirt that was sold for 150 TWD. Win! 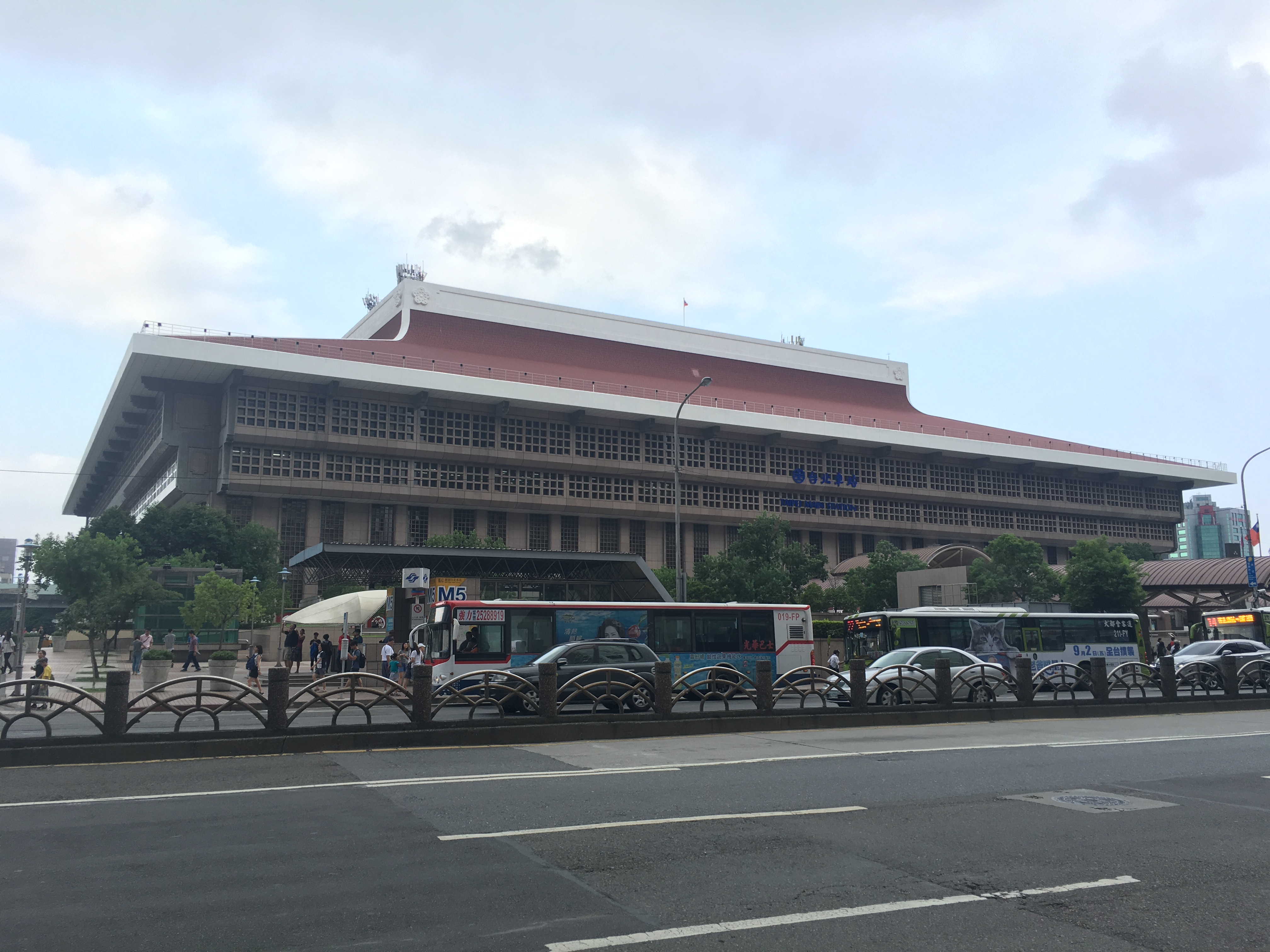 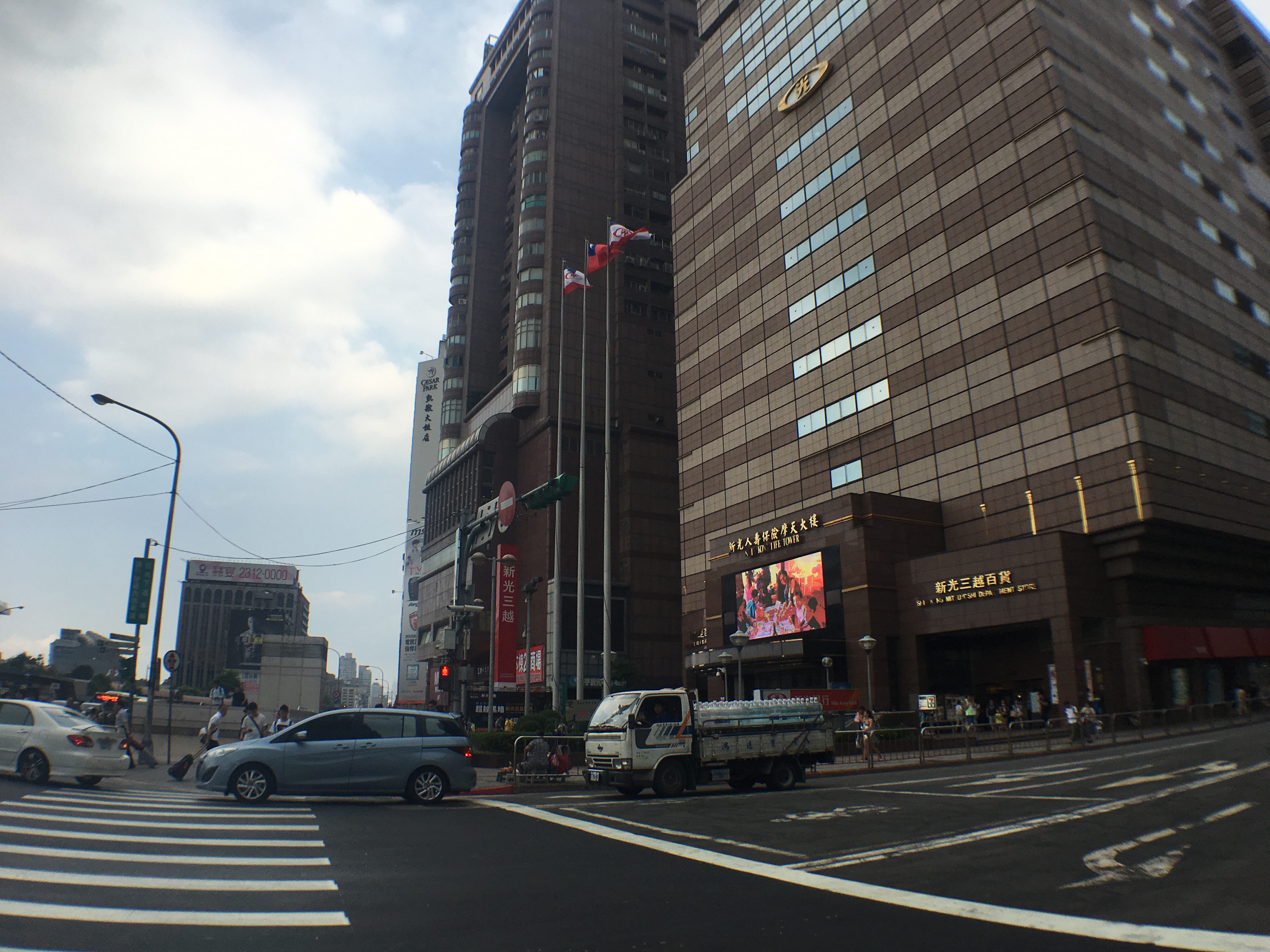 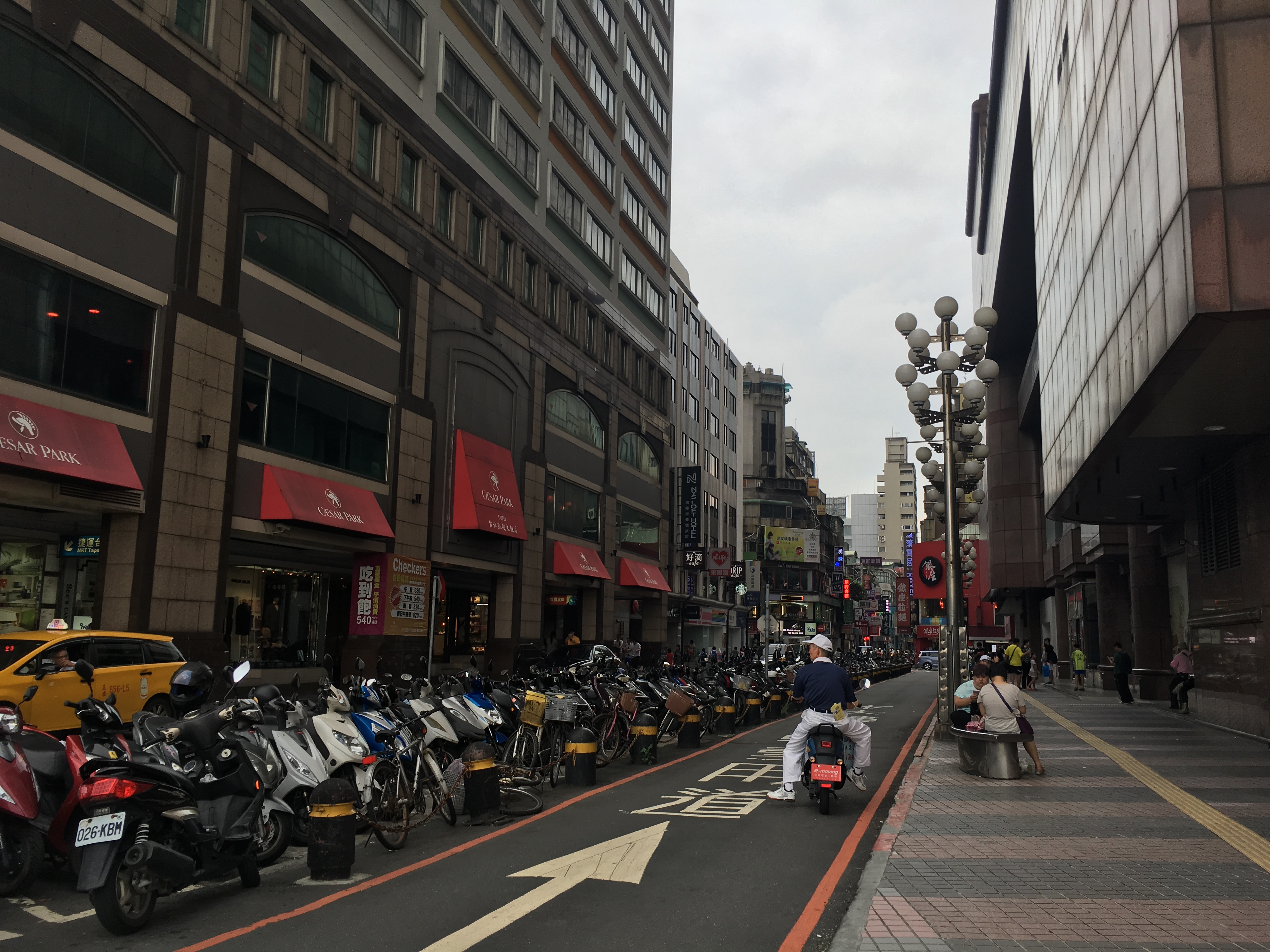 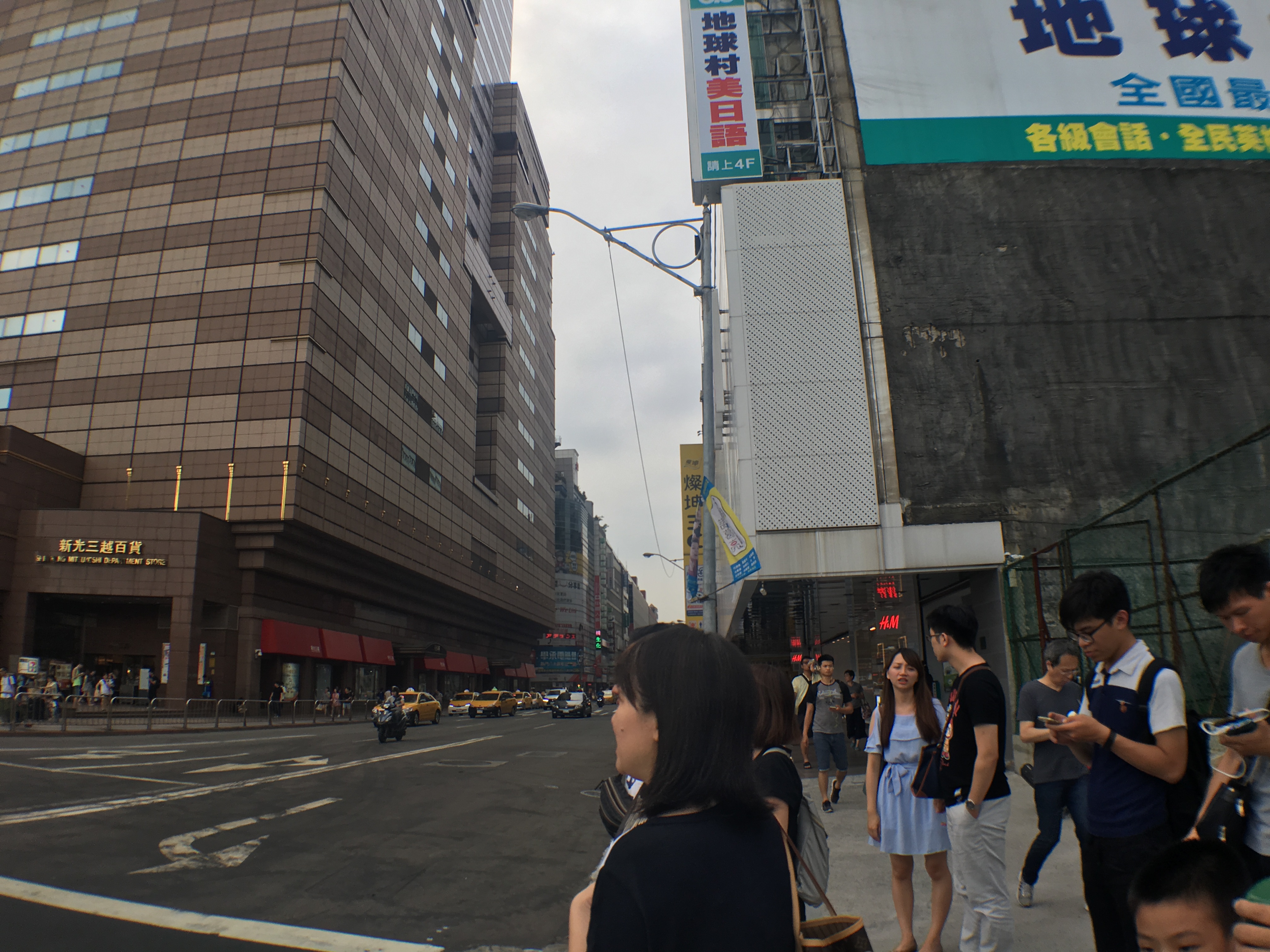 I actually saw PABLO while I was on the bus. C and I weren’t able to try it while we were in Japan and I thought it would be nice to have a cake for my birthday. It was good, but I figured out later that I should have just bought those small tarts because, at the end of my trip, I had to leave half of the cheesecake in the hotel room fridge. 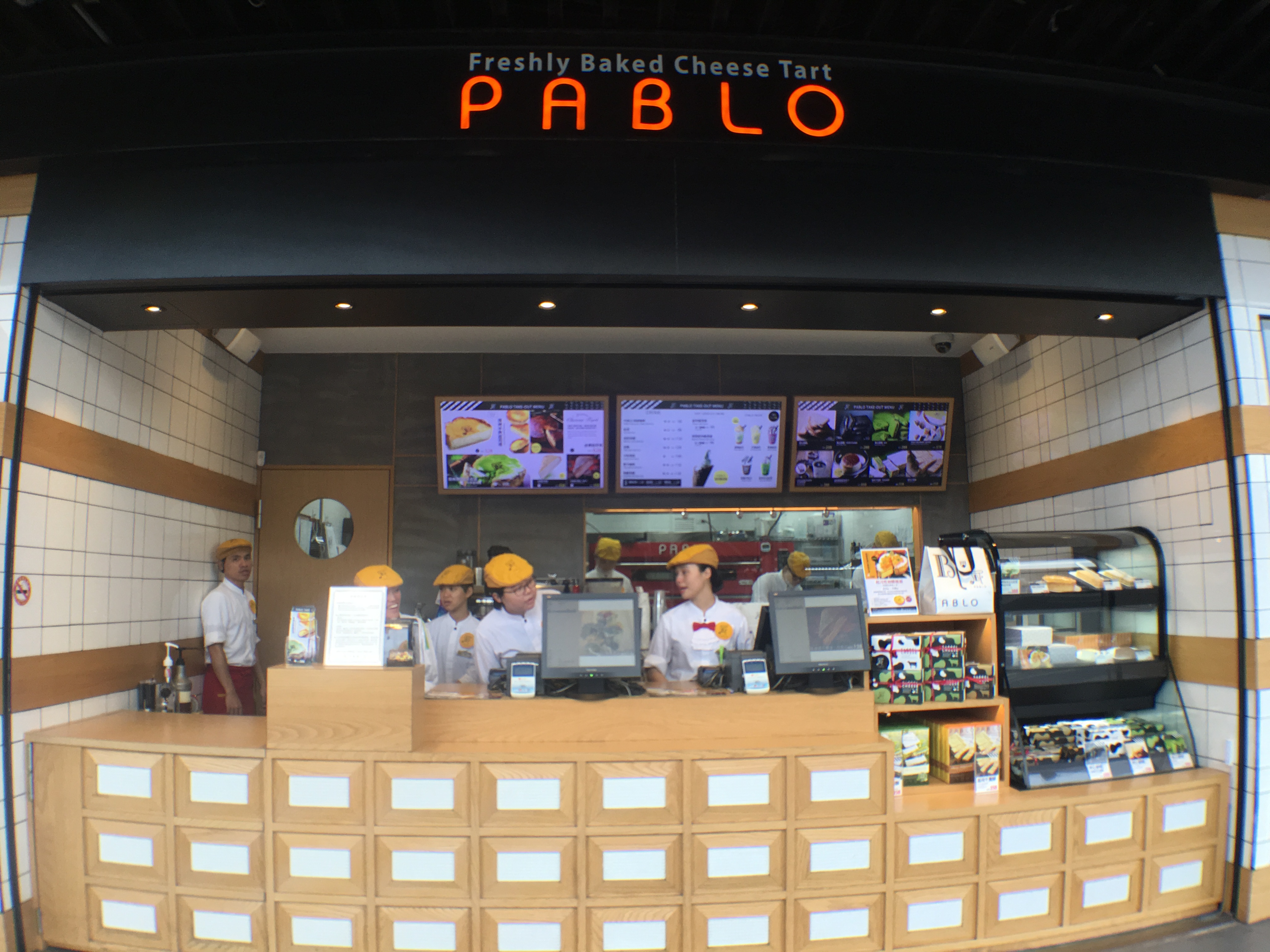 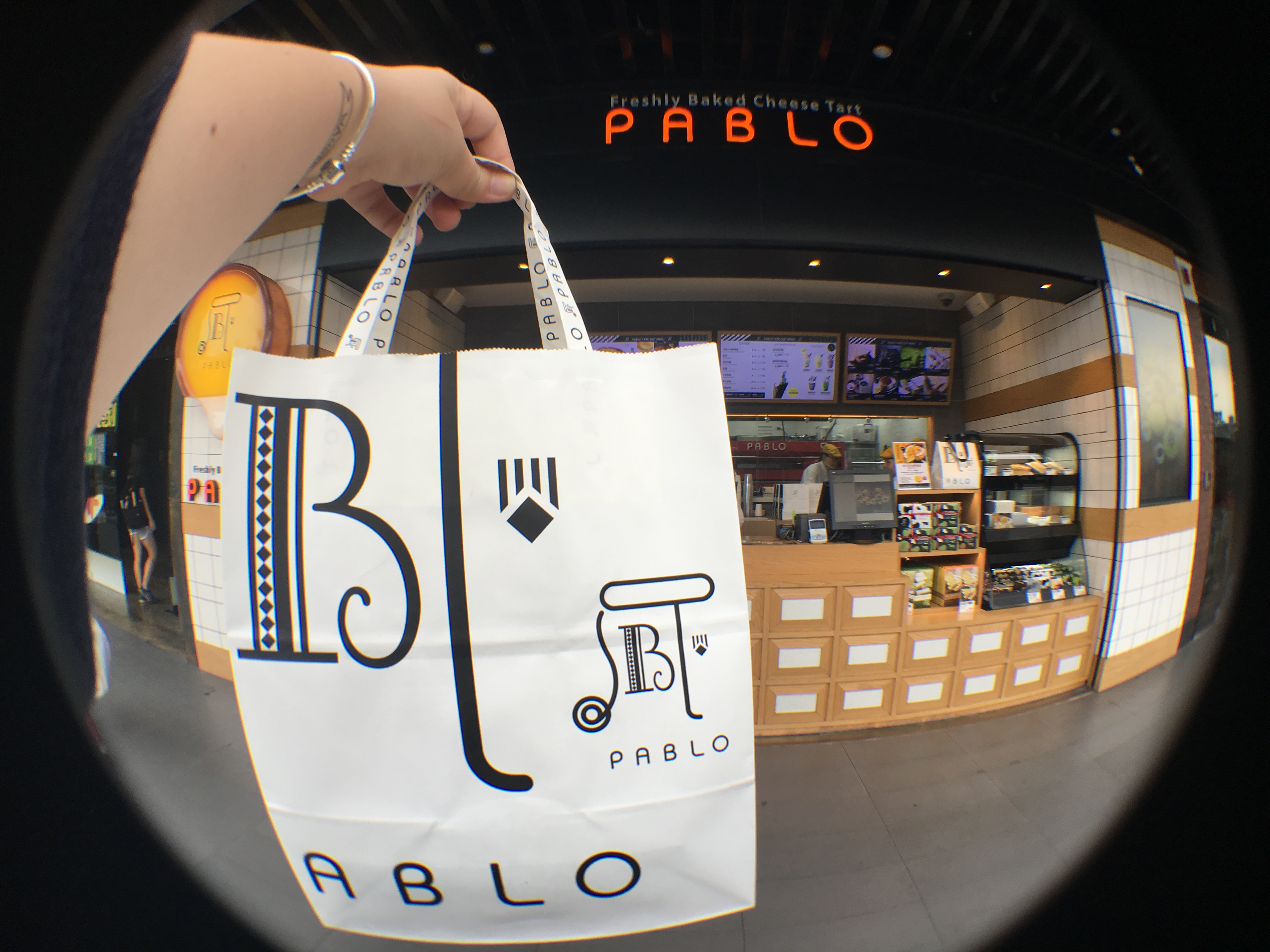 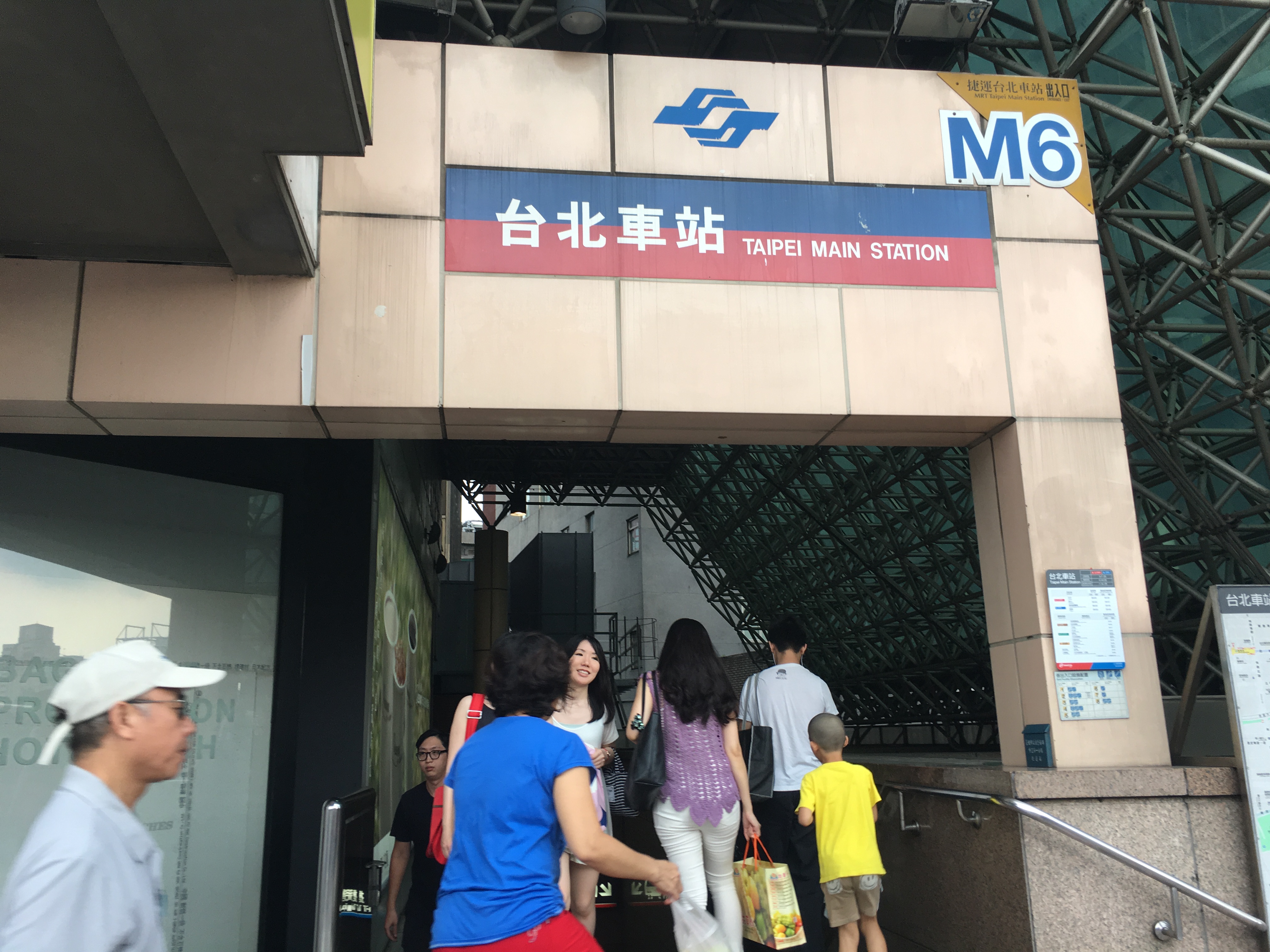 When I got back to the hotel (mostly, I just wanted to store the cheesecake in the fridge), I found out that there weren’t really restaurants that served Taiwanese food at that time. I was told though that Ningxia Night Market opens early and I will be able to find something to eat over there so they called me a cab to bring me to the market. One of the hotel staff did show me instructions on how to get there via public transportation, and I used that to go back to the hotel. 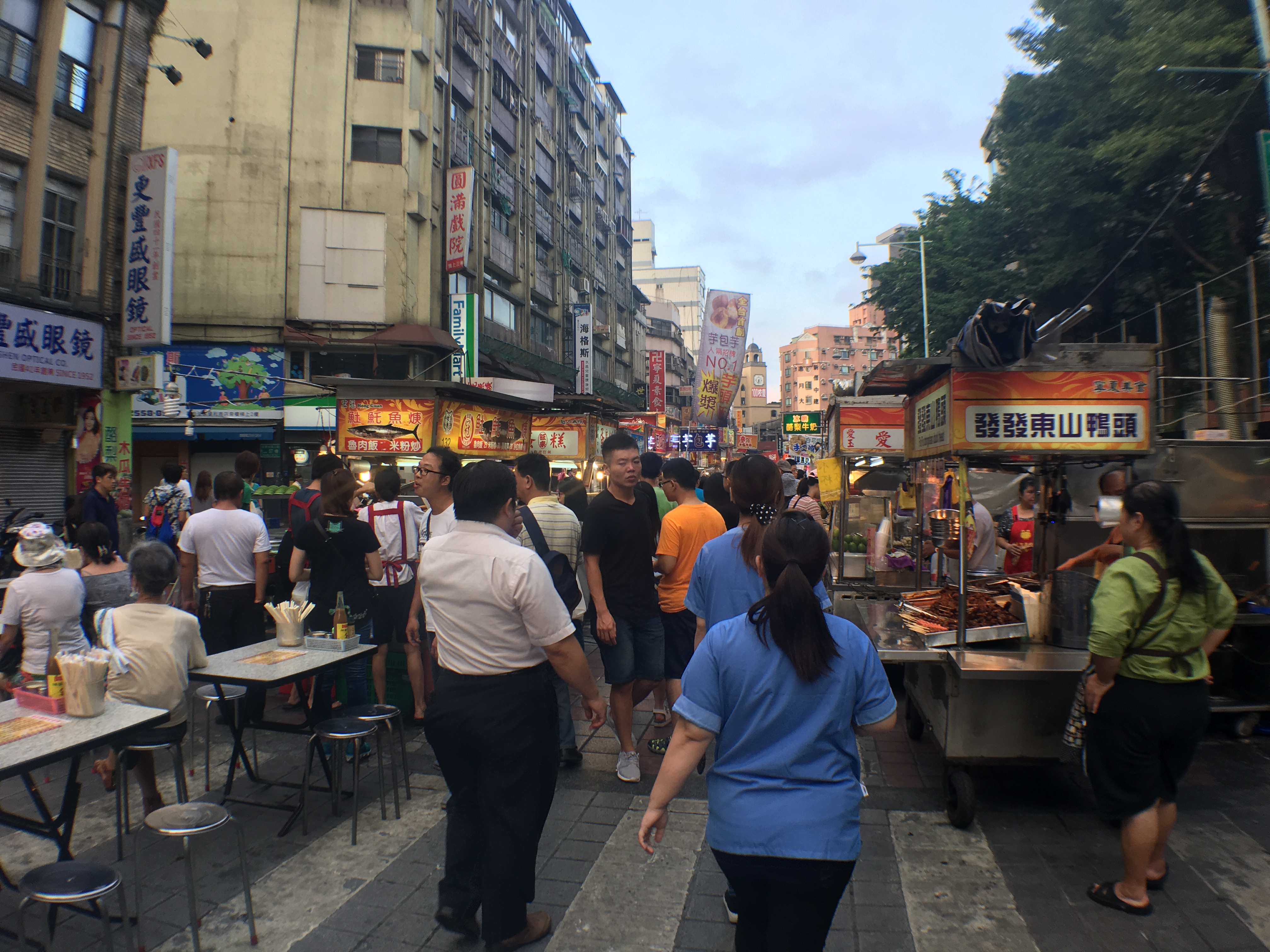 This was the only picture of food I ate at the night market because it was such a hassle to hold my phone in one hand while I eat with another. I had ordered so many random food items, I don’t even know which ones to recommend! 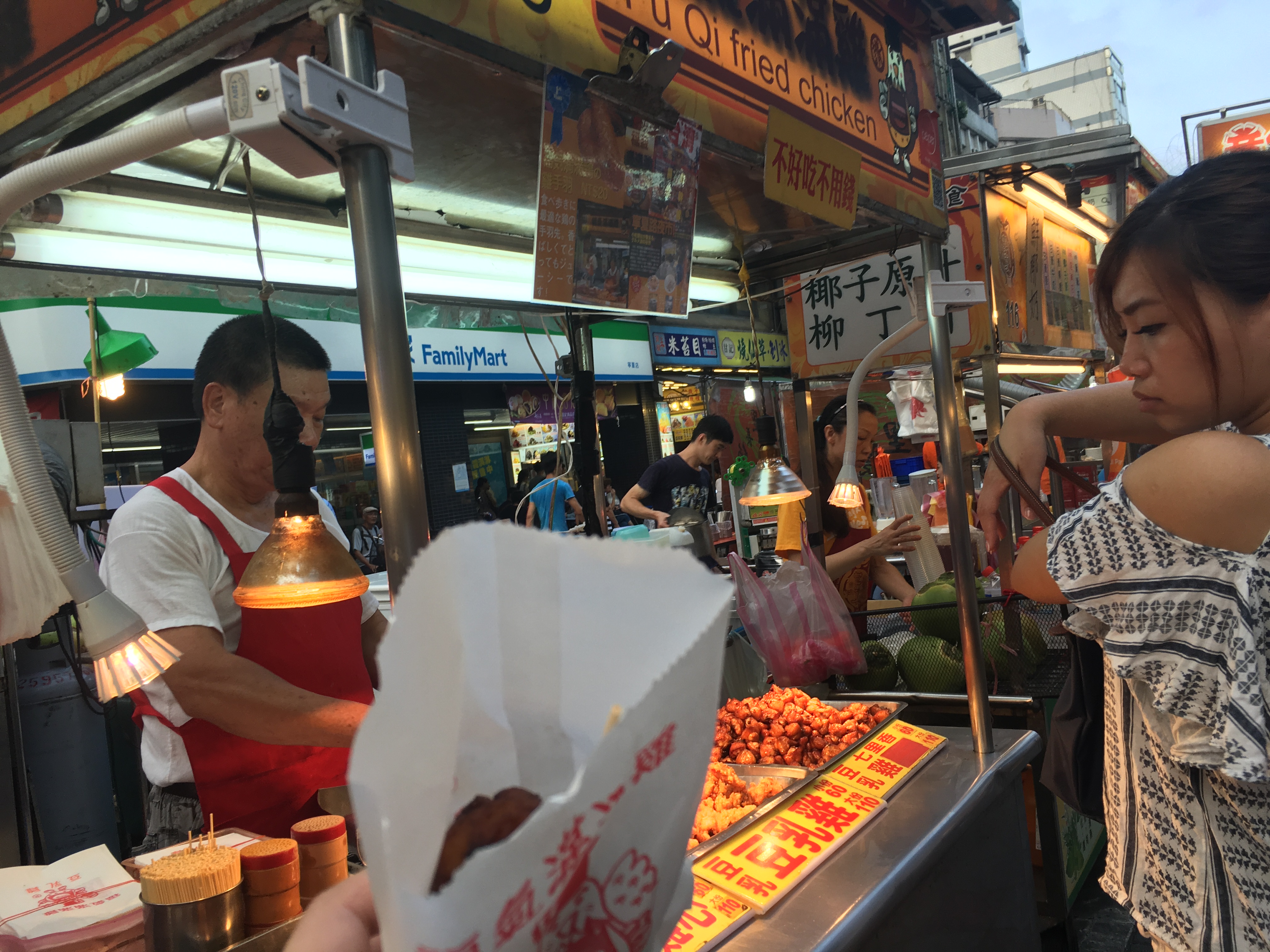 It was totally safe to put my phone in my backpack (I saw locals do it), but don’t forget to still exercise caution. 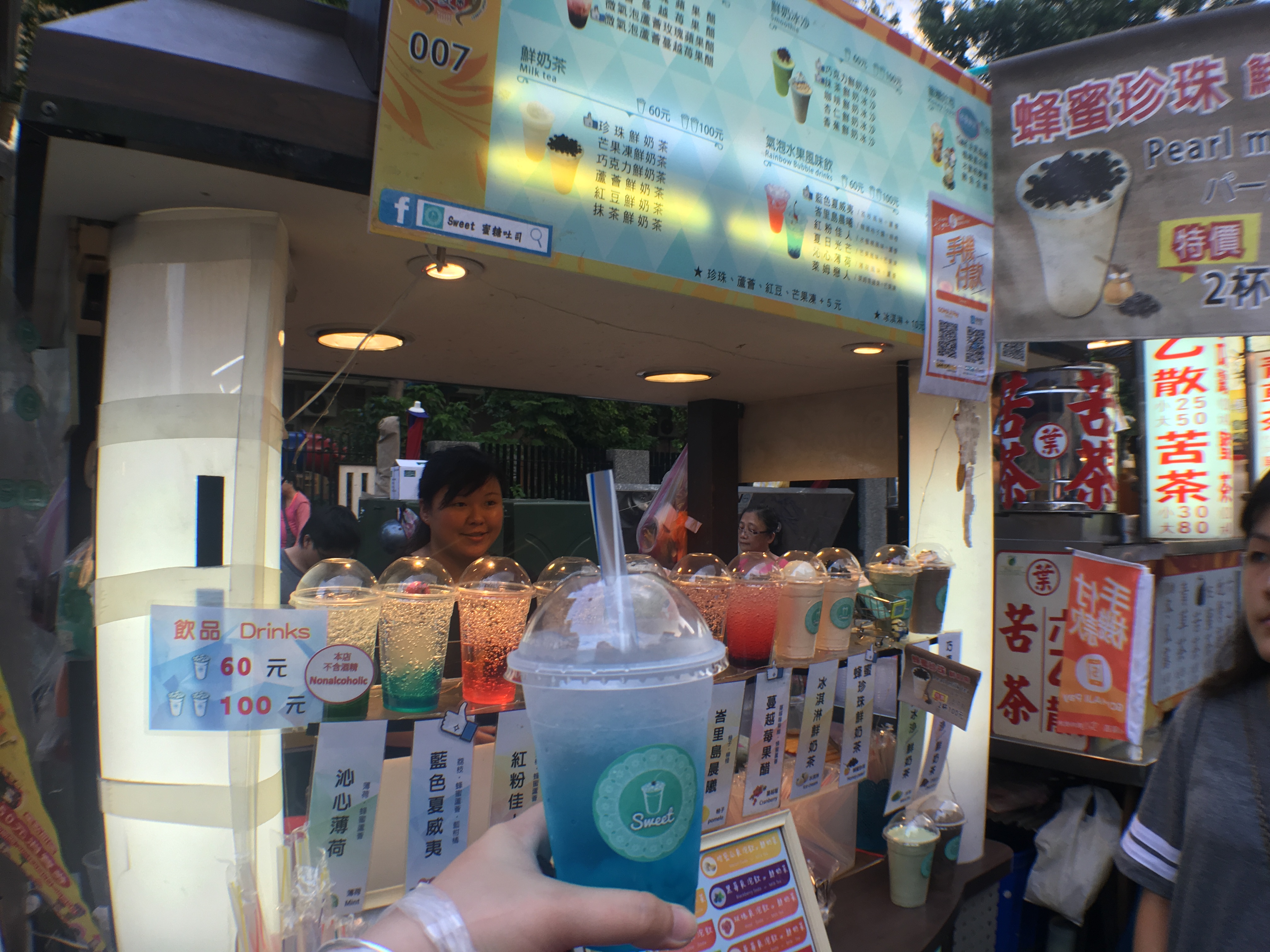 This big ass takoyaki’s stall had a line, so I lined up even if I was already full just to try it. I brought it back with me to the hotel and ate it there. I was not disappointed! I honestly wanna go back to Taiwan with either C, the sibs, or friends. There are so many things I did not get to eat because I had no one to share it with and unfortunately, my tummy is not a bottomless pit! 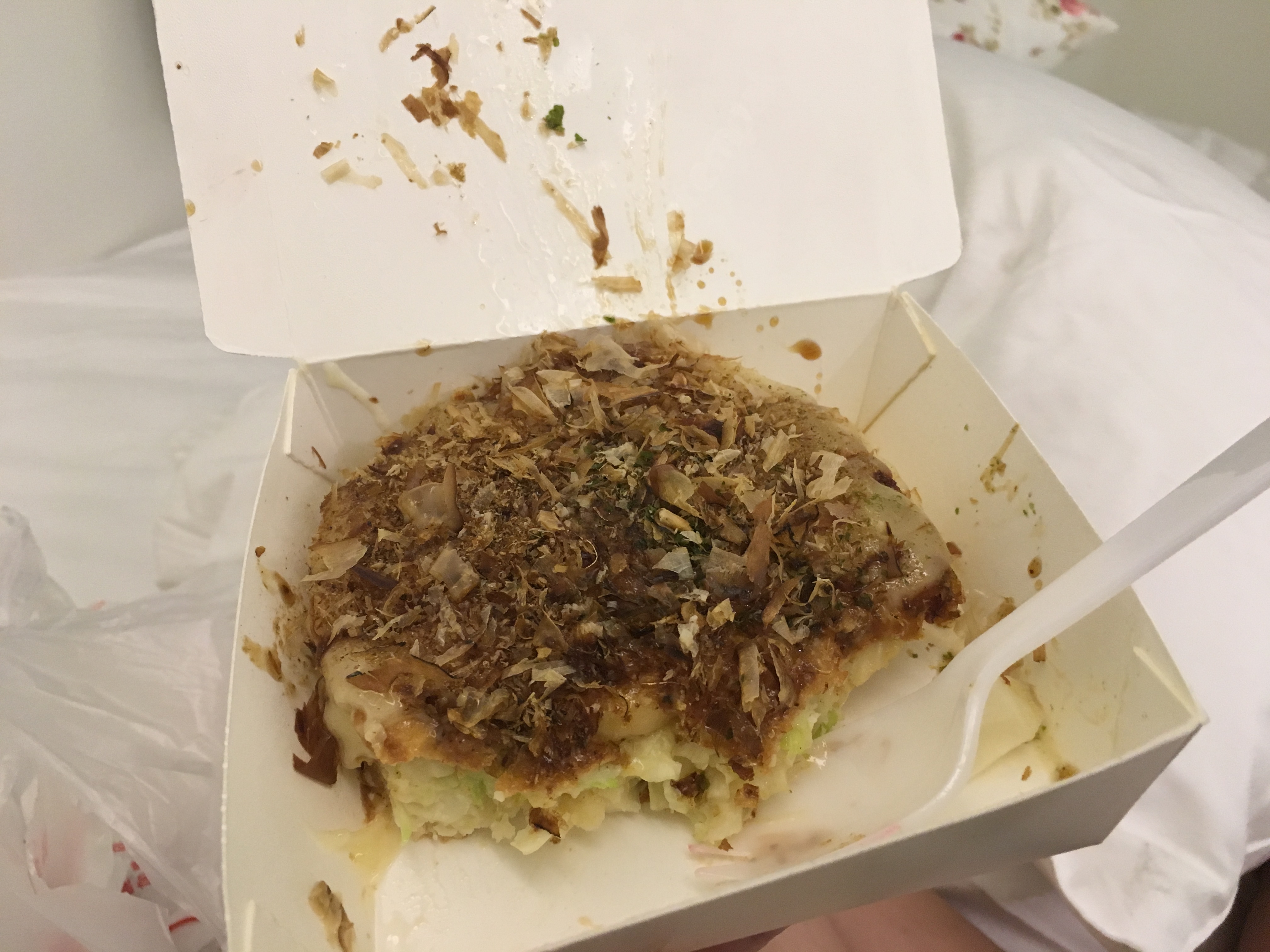 I went and video called C and the sibs so they can sing me a happy birthday while I hold the cake to the camera. Haha! Yes, I’m quirky like that. I made a reservation for TourMeAway’s pub crawl that night and was supposed to go after I freshened up, but I ended up eating cake while going on a Filipino movie marathon. Ahh, turning 25 and becoming a full fledged #TitasOfManila. 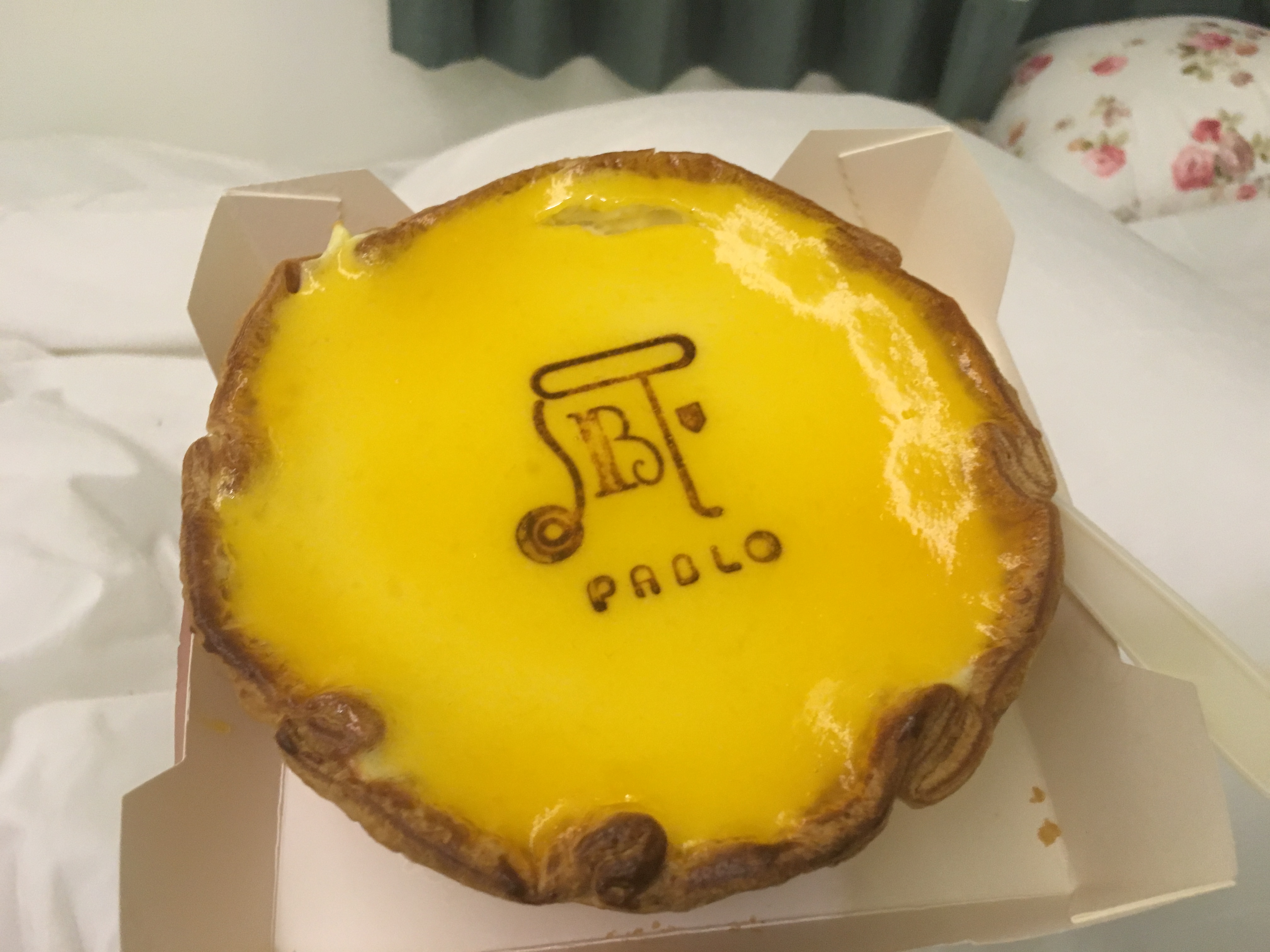 That’s it for my 25th! Here’s the video version of Day 2 (unavailable on mobile devices because of copyrighted content) with notable facial expressions while paragliding. Haha!