It was around four months ago when I made the trip from Ho Chi Minh to Siem Reap. Now this post is finally up, yay! The effort that goes into making these series of posts is truly a feat. *pats self on back* I’m not even taking this seriously (EDIT: in a way where there is no pressure on me because nothing is riding on it), so kudos to those who turned blogging into their living.

Moving on, though. I remember that I have already mentioned a few posts back how little I knew about Vietnam and Cambodia.. and how clueless I was that it would take 12 hours to get from Ho Chi Minh to Siem Reap. I booked the bus tickets online prior to my trip, though, because I wanted to avoid missing my flight back to Manila. I booked a seat in Mekong Express Limousine Bus which was admittedly more expensive than the other bus lines I saw but had a lot of great reviews. Shelling out $24 is not a problem if it meant I’d get there. The only departure time was at 7 AM, though, which was unfortunate because it meant I will spend the rest of my day in transit. I rode on the back of Liem’s motorcycle to the station and was the first one on the bus. I bought a few goodies from a nearby bakery, only to find out that the ride had a complimentary box of pastries and a bottle of water. 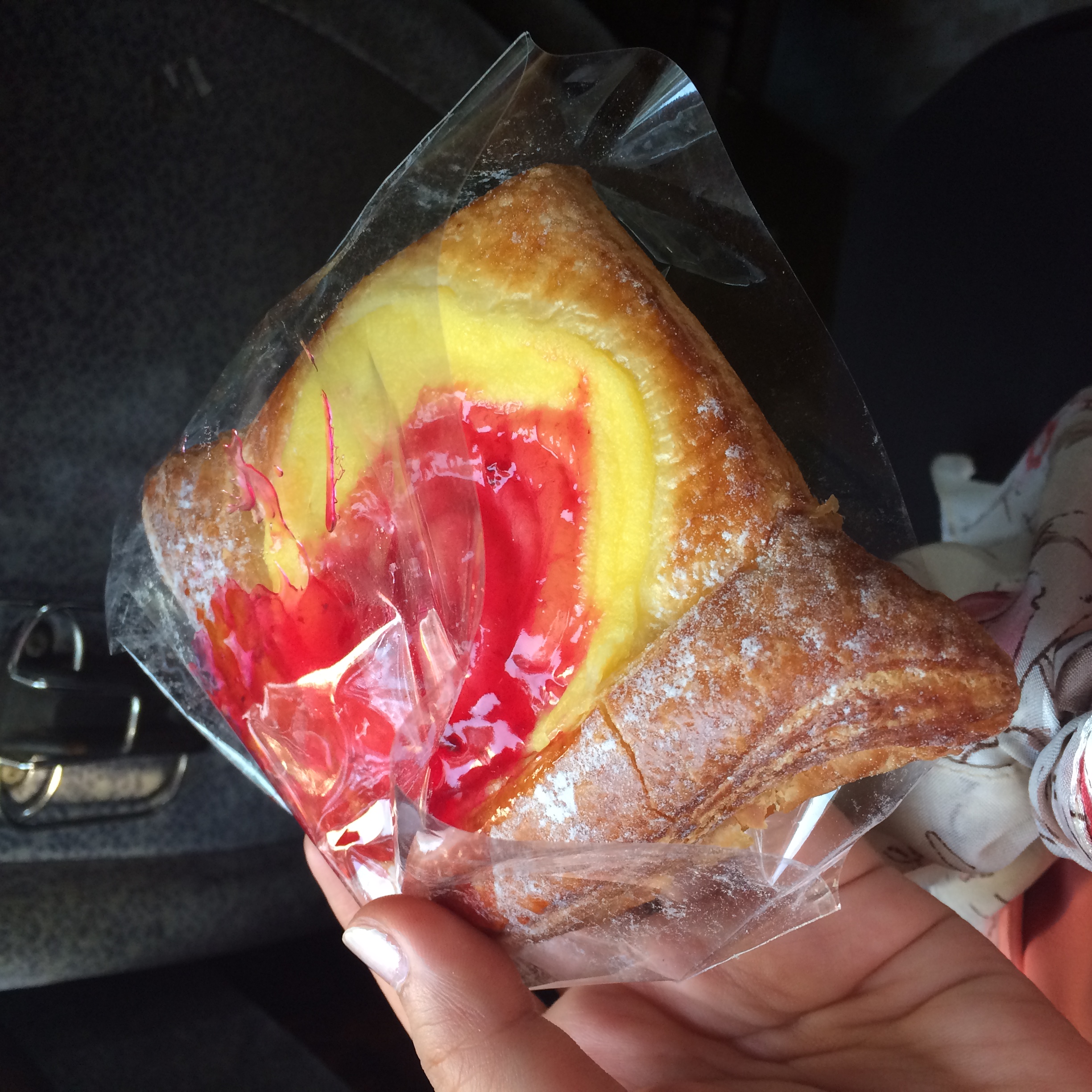 I saw this girl’s luggage with a Cebu Pacific tag, and found out we were seat mates! Jed is a fellow Pinay, working as a music teacher in Phnom Penh. We talked the entire bus ride (#hugotpamore) until she got off somewhere in Phnom Penh. 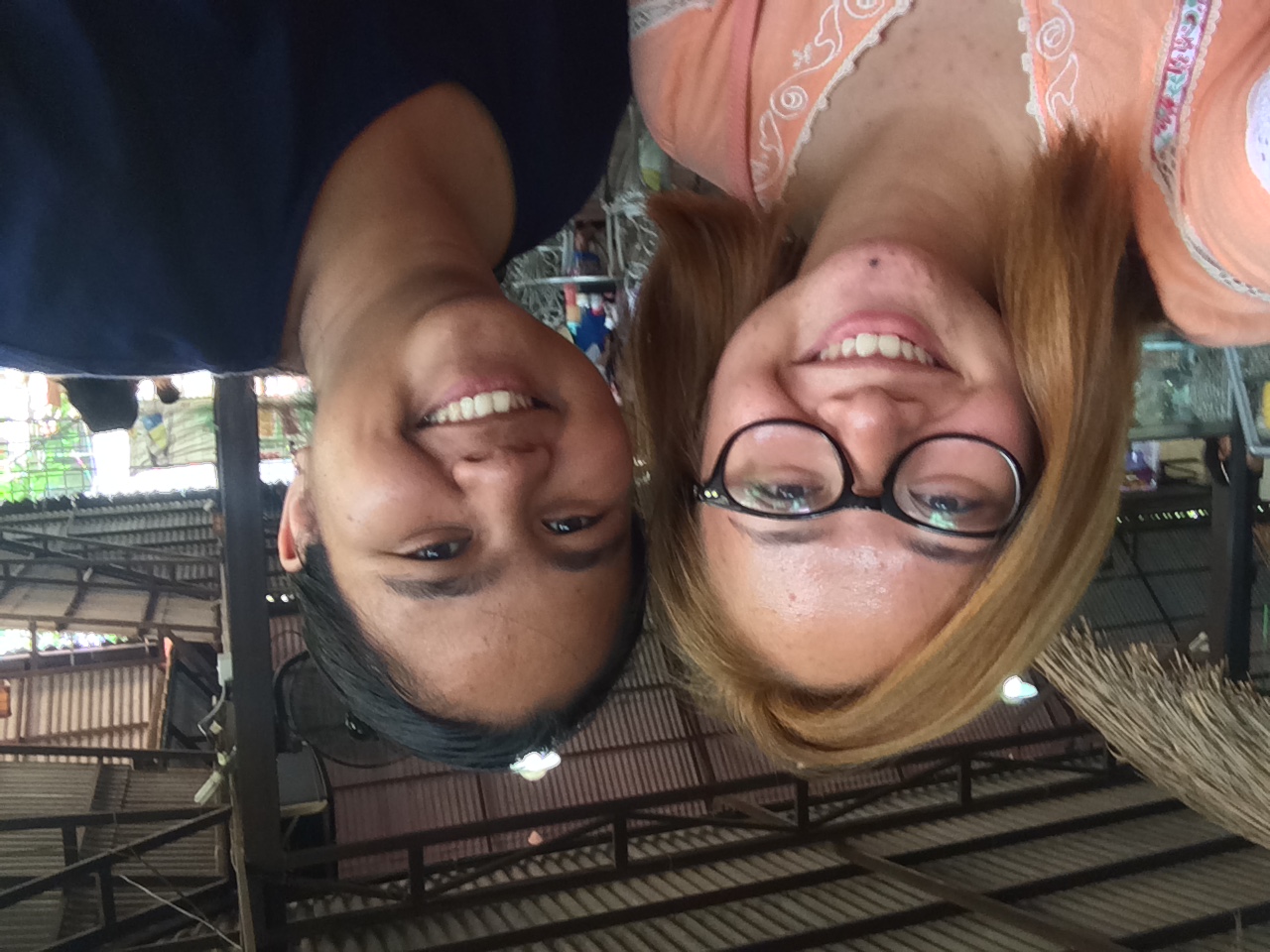 She even bought me lunch during a stopover in Bavet. 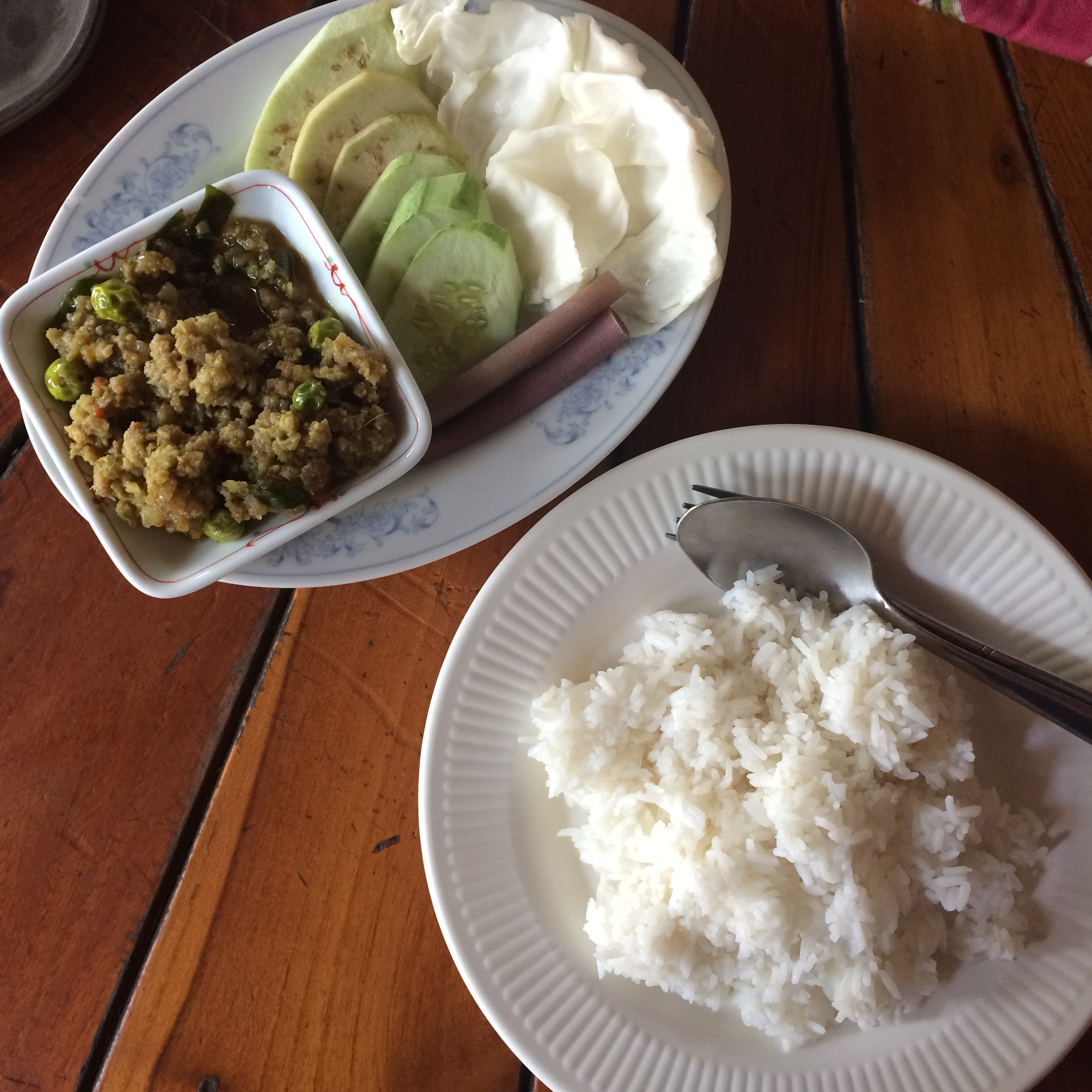 We arrived around 1:30 PM in Phnom Penh where I had to hop on another bus that was leaving for Siem Reap by 2 PM. I had to pee quickly at the bus station because I have already deposited my bag in the bus to Siem Reap. The bus does have wifi and a toilet, but I’m not a fan of using toilets on a moving vehicle of any kind. 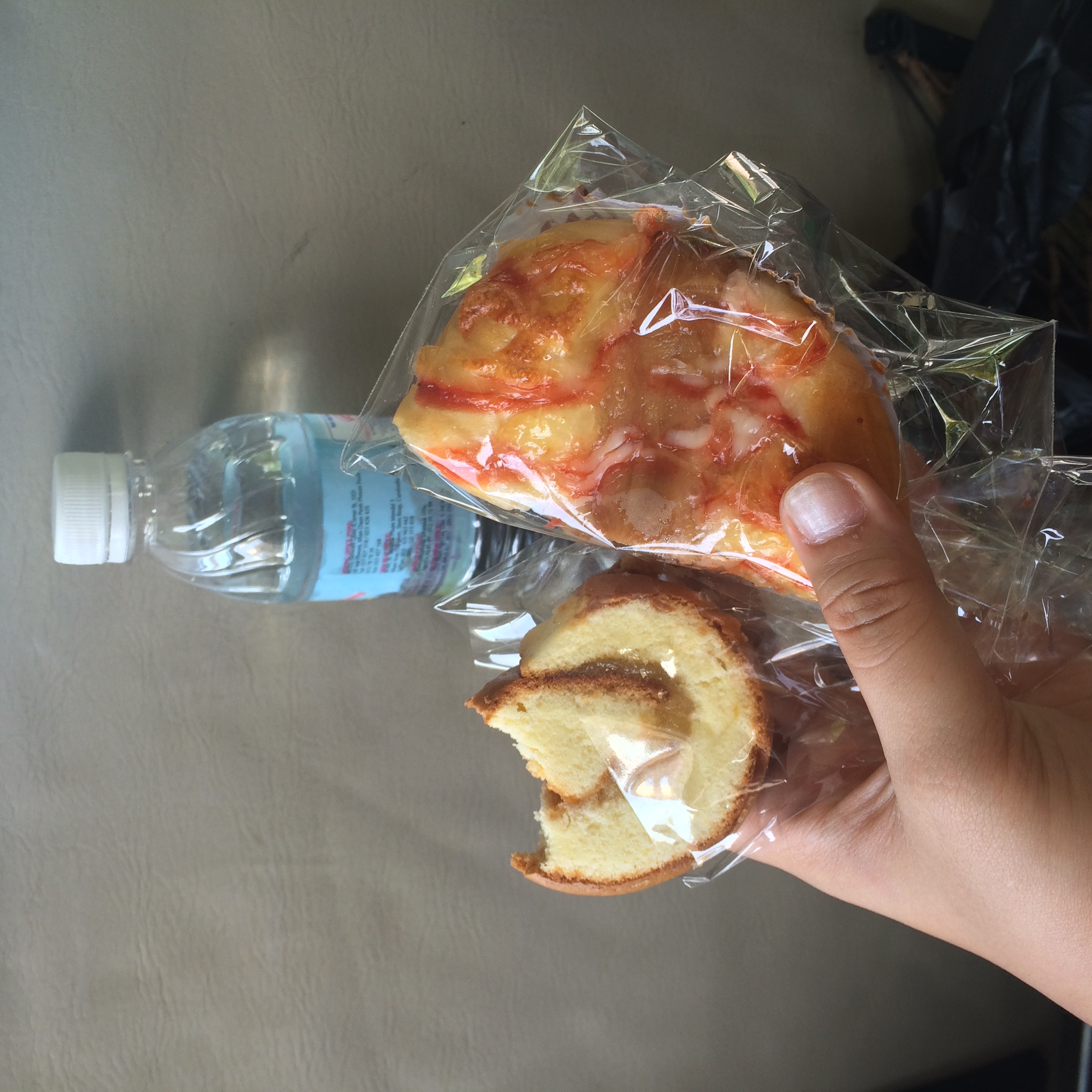 During another stopover about two hours away from Siem Reap, I ordered $4 Beef Lok Lak, as per Jed’s suggestion, which was pretty similar to Bistek Tagalog. The increase in meal prices was very noticeable and I seriously hoped it would not be the case. Because food! 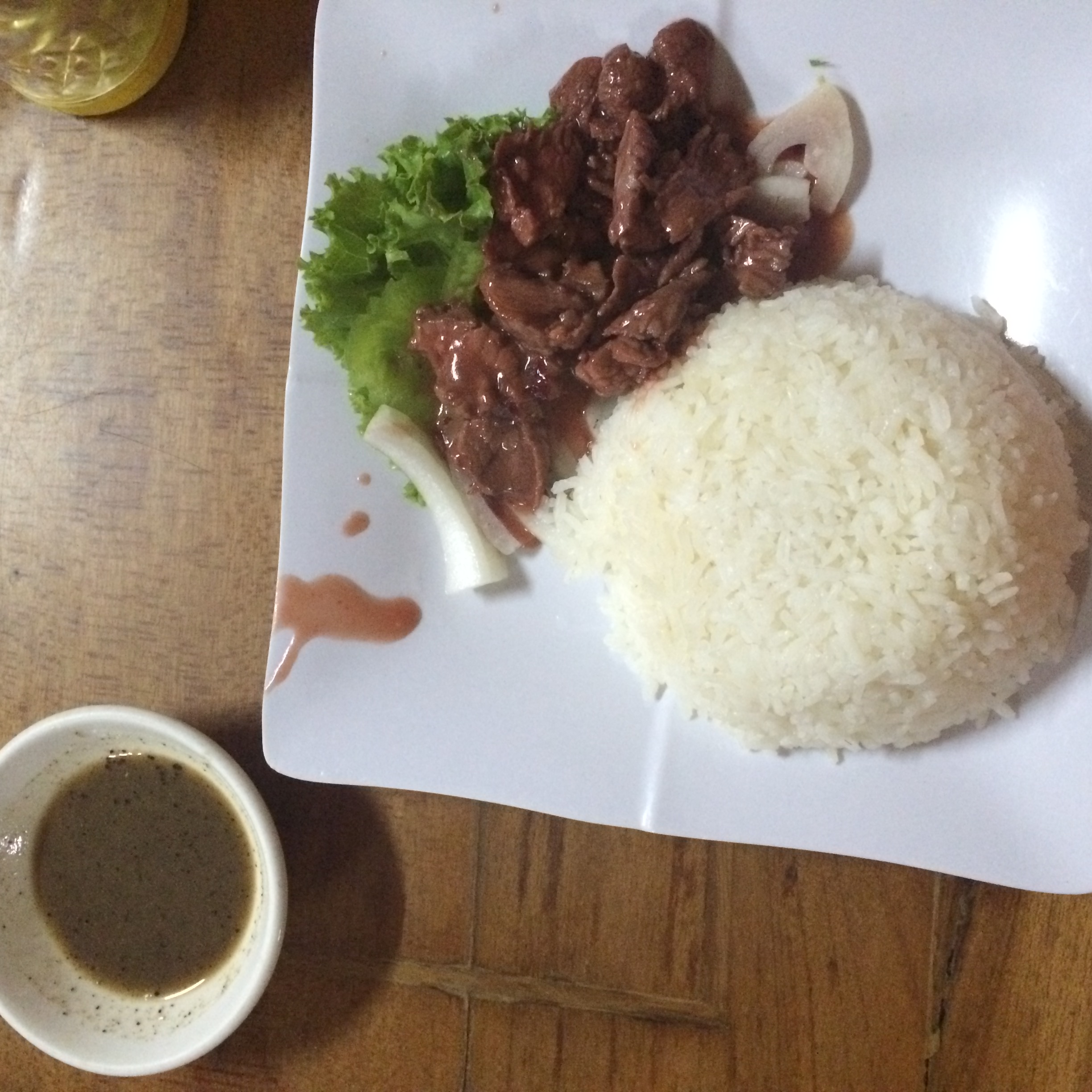 The bus finally arrived, and for the passenger’s safety, the staff of the bus company will put all the luggage inside their office before advising the passengers to get off the bus to claim theirs. This is brilliant in a sense because there were a lot of tuktuk drivers waiting outside the bus and if it’s any similar to the Philippines, maybe some of them will grab your bag to force you to ride their tuktuk the moment you reach out for yours. 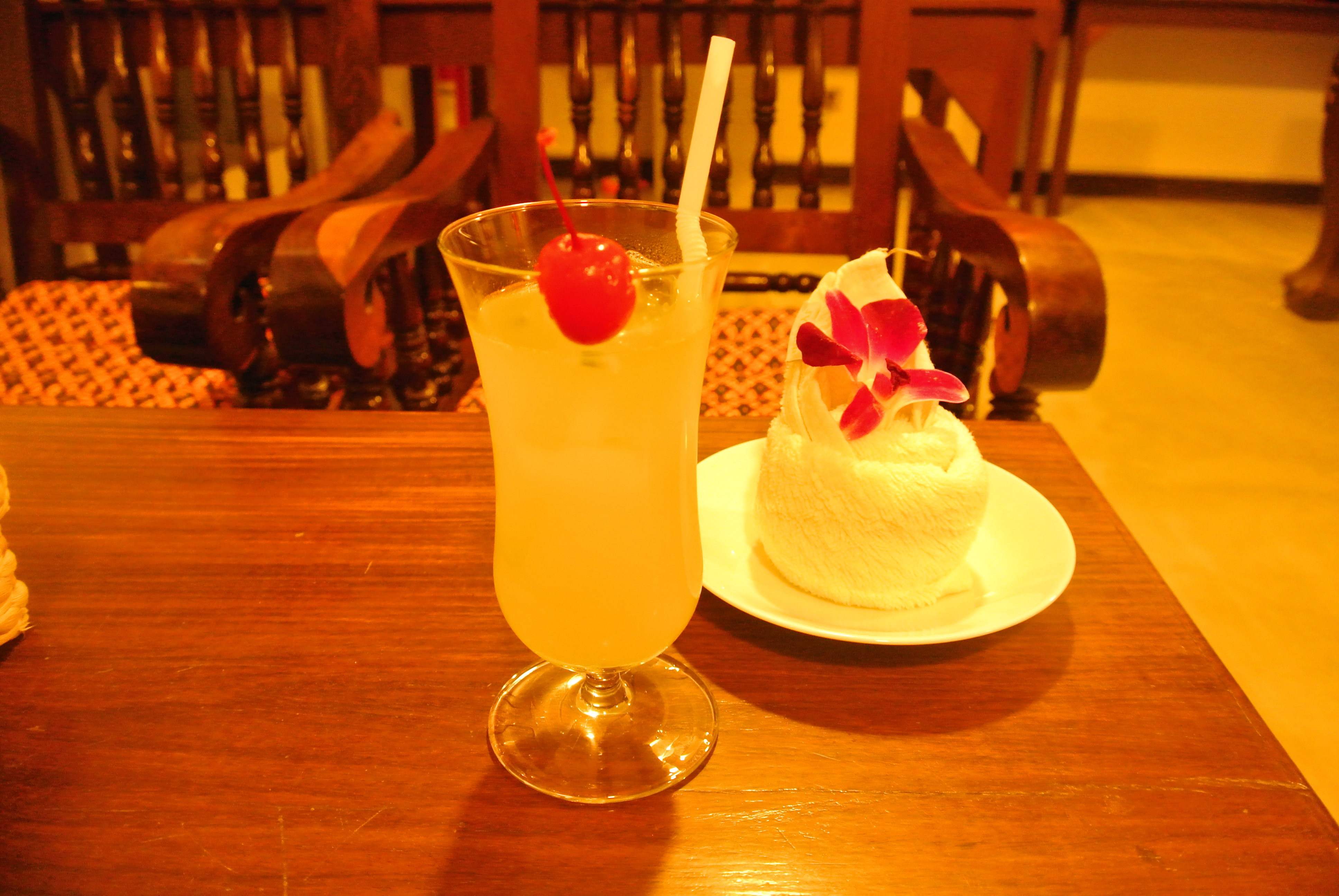 The free tuktuk from Cambana d’Angkor Suites was waiting for me when I got off the bus, with my name printed out on the paper, along with the name of the hotel. This was my most expensive accommodation even though I booked their cheapest room. The check in was a breeze (meaning I had a hot towel and juice while Somnang was getting my room number ha!), and the temptation to forego the photos and just collapse in the bed was high. But hey, a great room like this deserves to be documented! 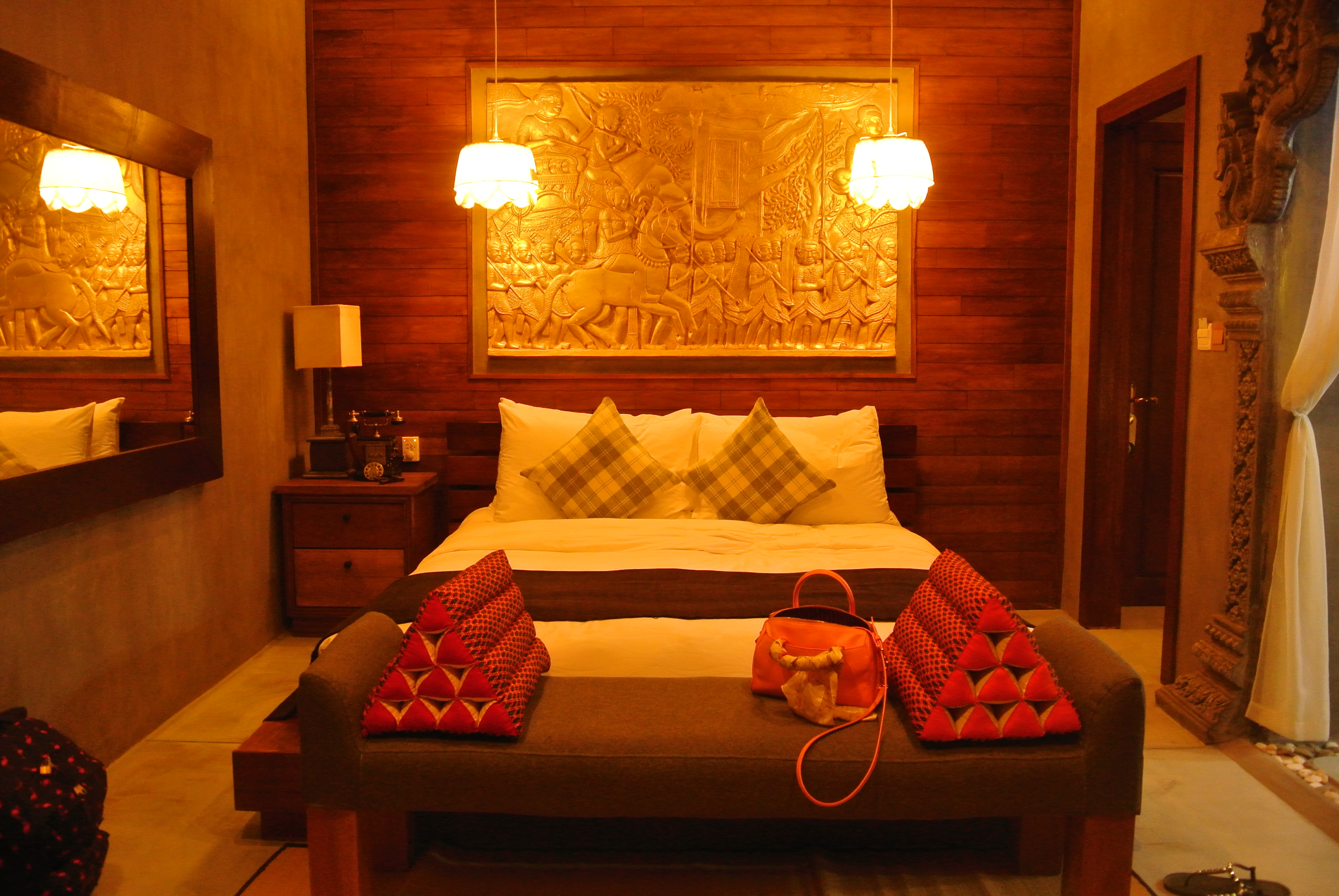 I’m the type of travel enthusiast who likes to stay in charming boutique hotels. I’m sure if you’ve been following this blog long enough, you already have seen evidence of that. I take the number of rooms into account, the location, and the room design. I have been researching for days for a room but when I saw this hotel in Agoda, it immediately caught my attention. I made a quick check in TripAdvisor for reviews (really few at that time), threw caution to the wind and booked it. The universe was very kind to me, and the spontaneous booking paid off and gave me a great room. 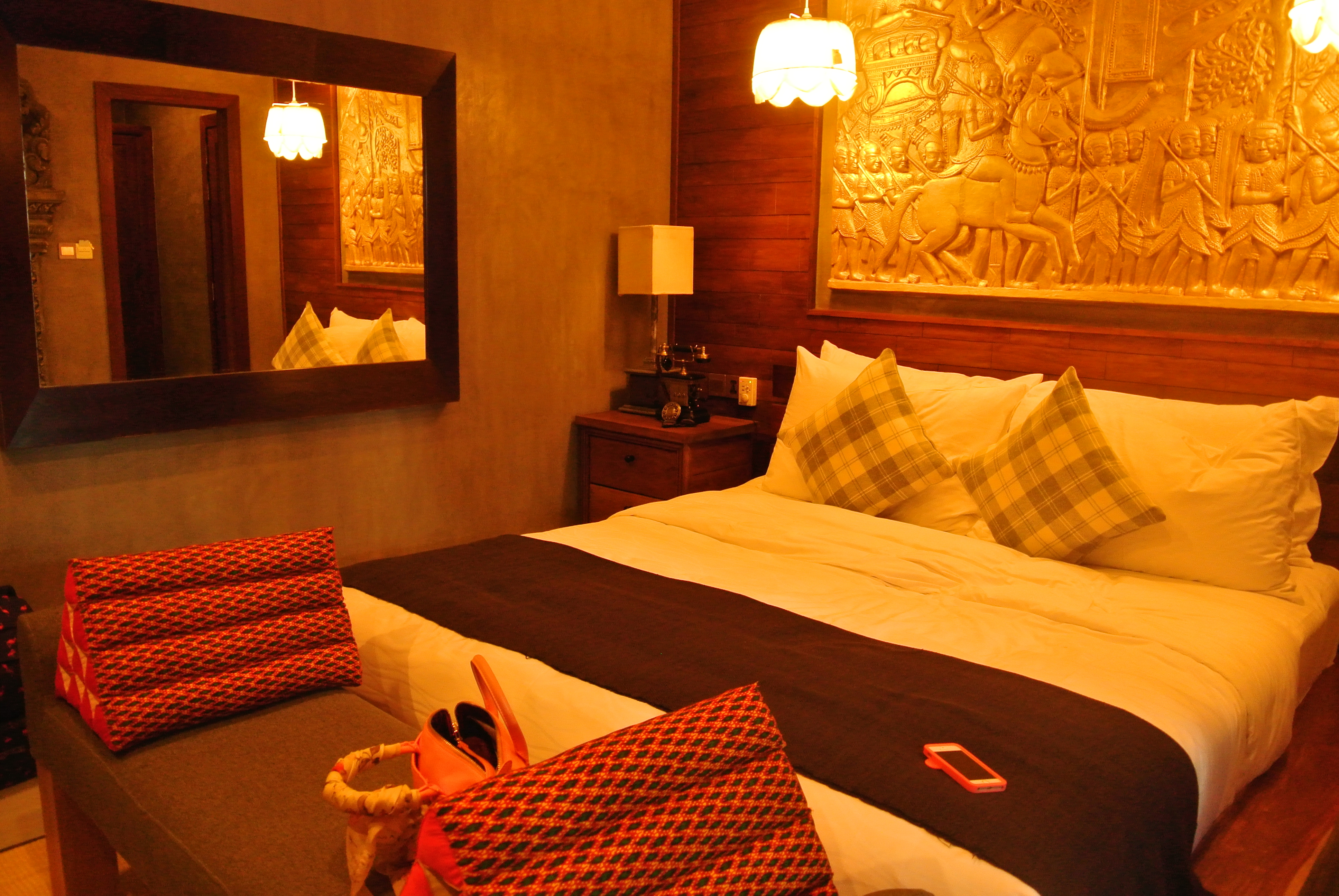 The room had personality, clean and the design is very nice. I tend to favor non-generic hotel rooms because plain is boring. I like waking up to the thought “OMG I’m really in Cambodia!” (haha), and it’s hard not to do that when you have a luxurious Khmer-inspired room! And I slept like a baby in the bed, so there’s that. I opened the wardrobe to find two sets of robe and slippers and I am serious when I say that staying in hotels turn me into a little kid again. I stripped down to my underthings and put one on while I fill the tub with hot water. (Land travel via bus is exhausting, okay.) 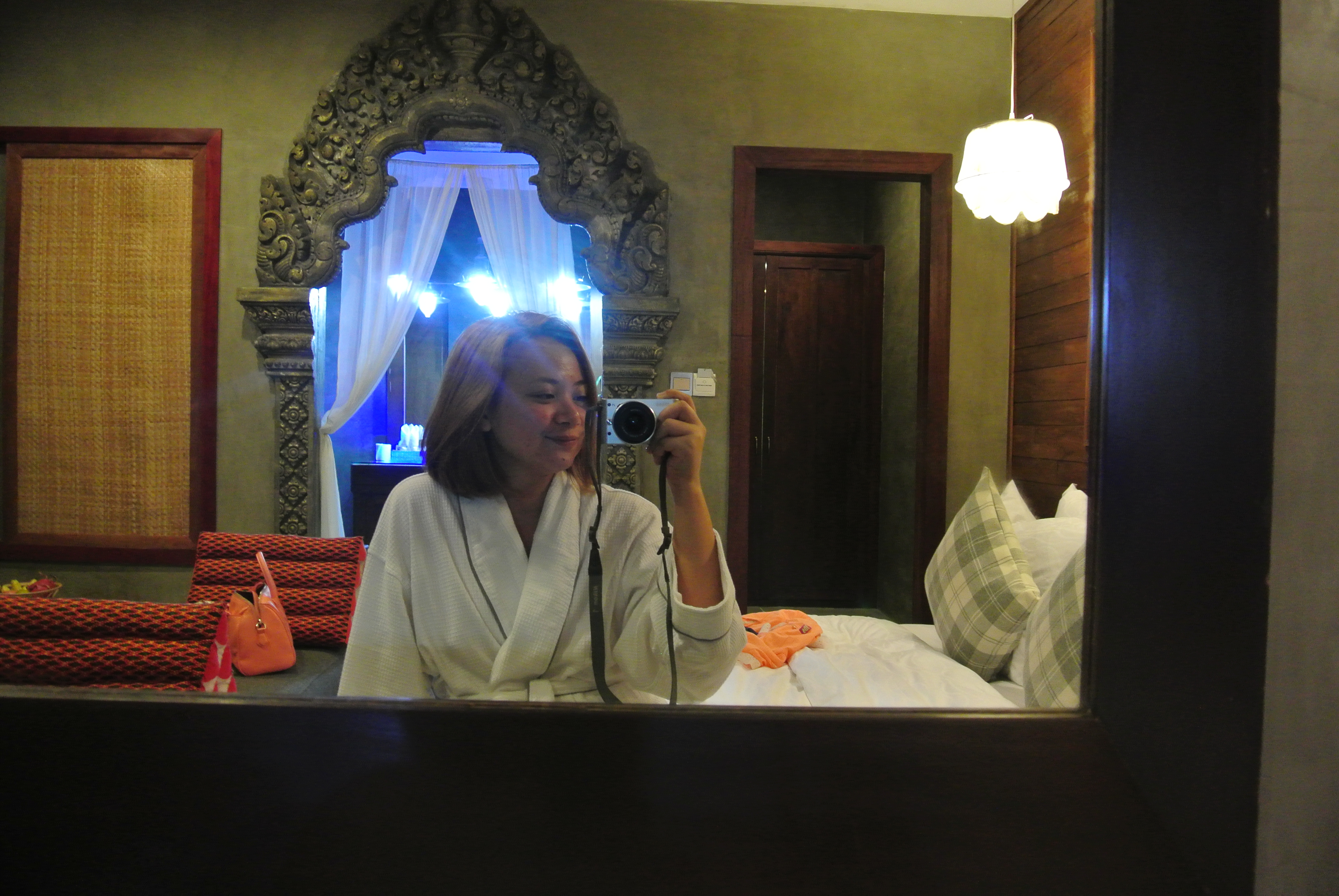 The location is a bit far from Old Market, Pub Street, and Angkor Wat but they offer free airport/bus station transfers, as well as drop offs via tuktuk to anywhere or you can rent a bicycle for $3 per day. The staff will give you the manager’s card with a map in the back that you can show to tuktuk drivers. From the Old Market & Pub Street, they should only charge you about $3 (I only have to pay $2 though :P). And like I said, that’s okay because you can just soak in hot water before you go to sleep. Wait, did I just say tub? 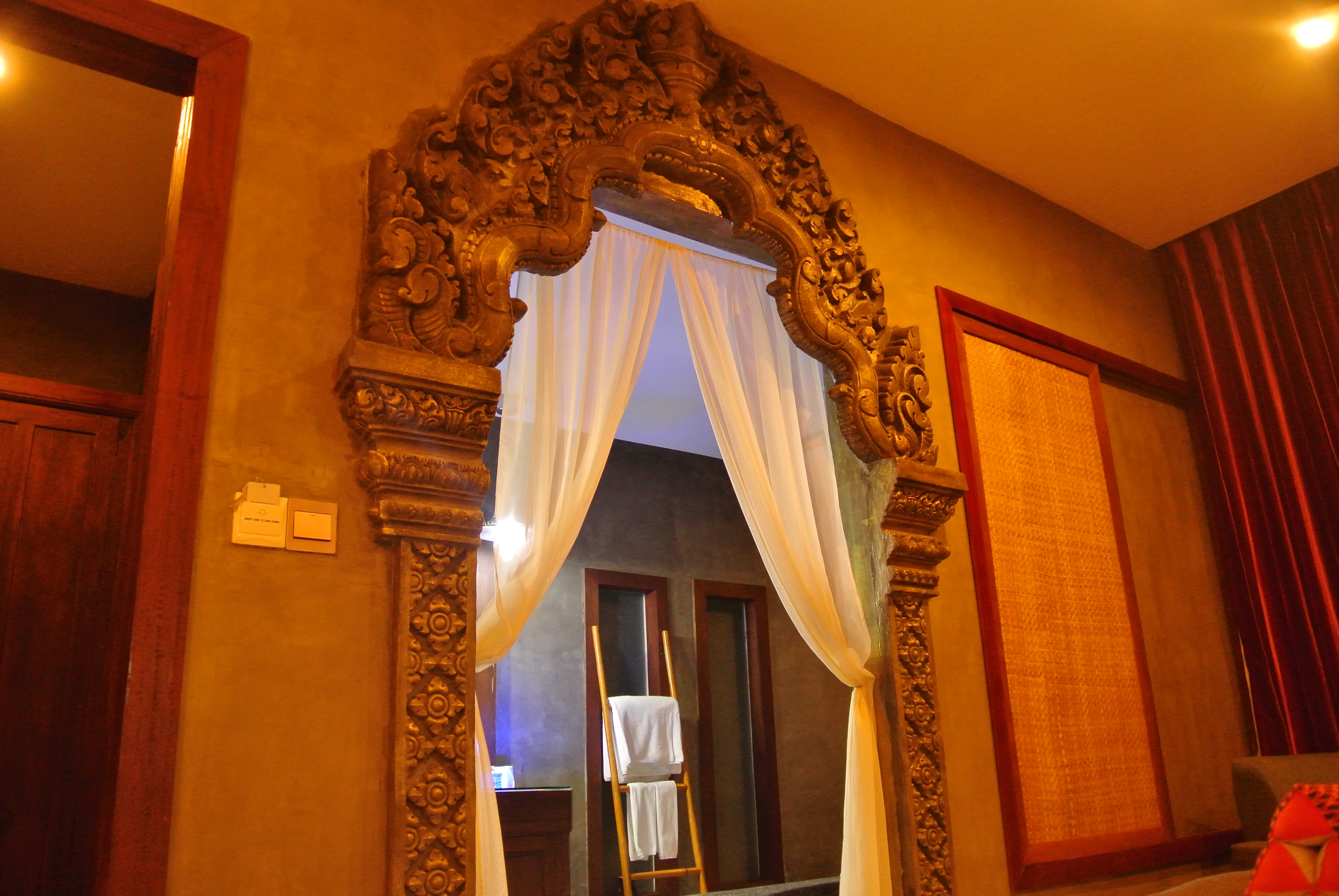 And yes, there is a tub! I’m a huge fan of rooms with tubs because it’s something I don’t have in my own bathroom lol. Theirs though did not have a door, so this would be more suitable for couples.. unless you don’t mind someone barging in on you starkers. 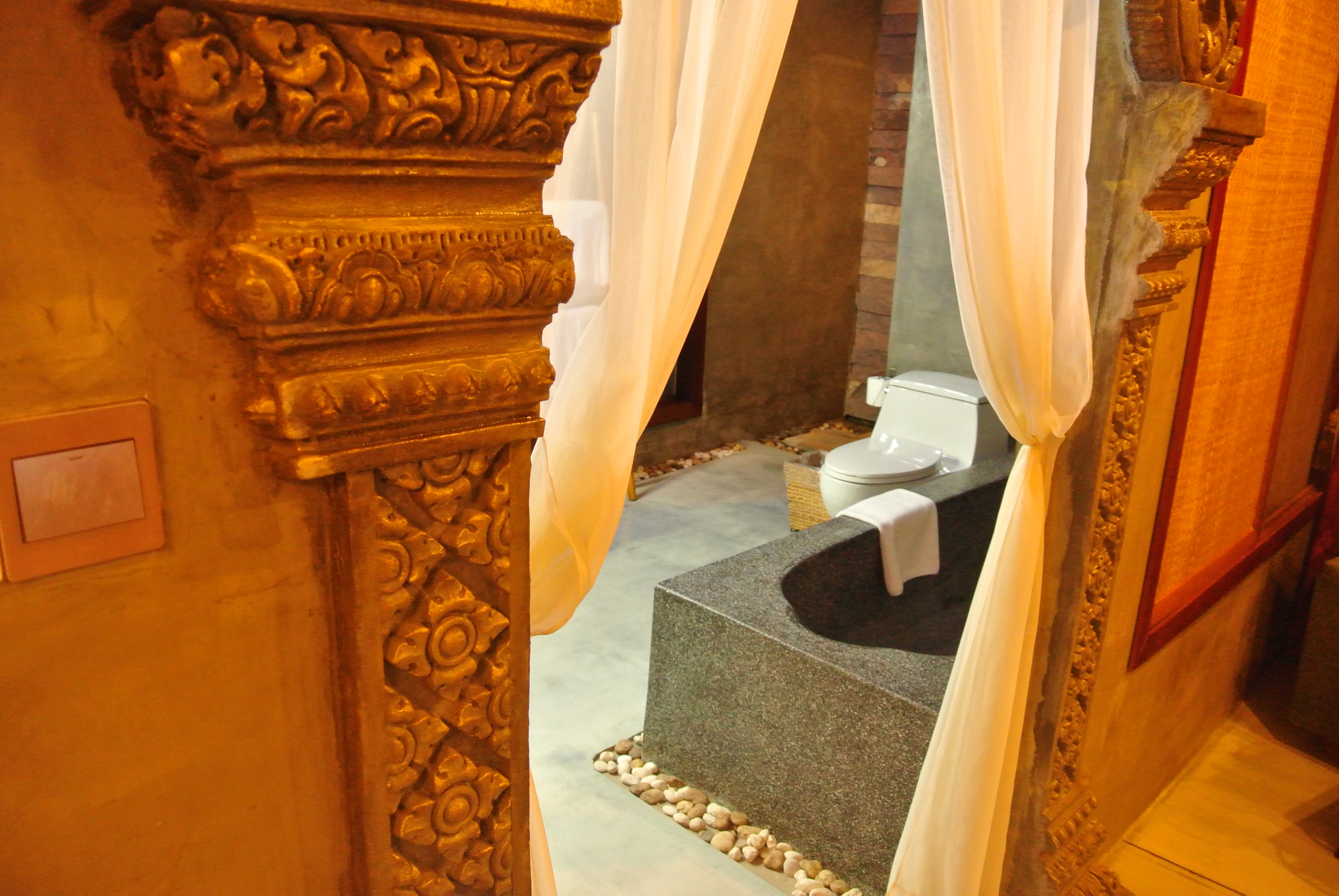 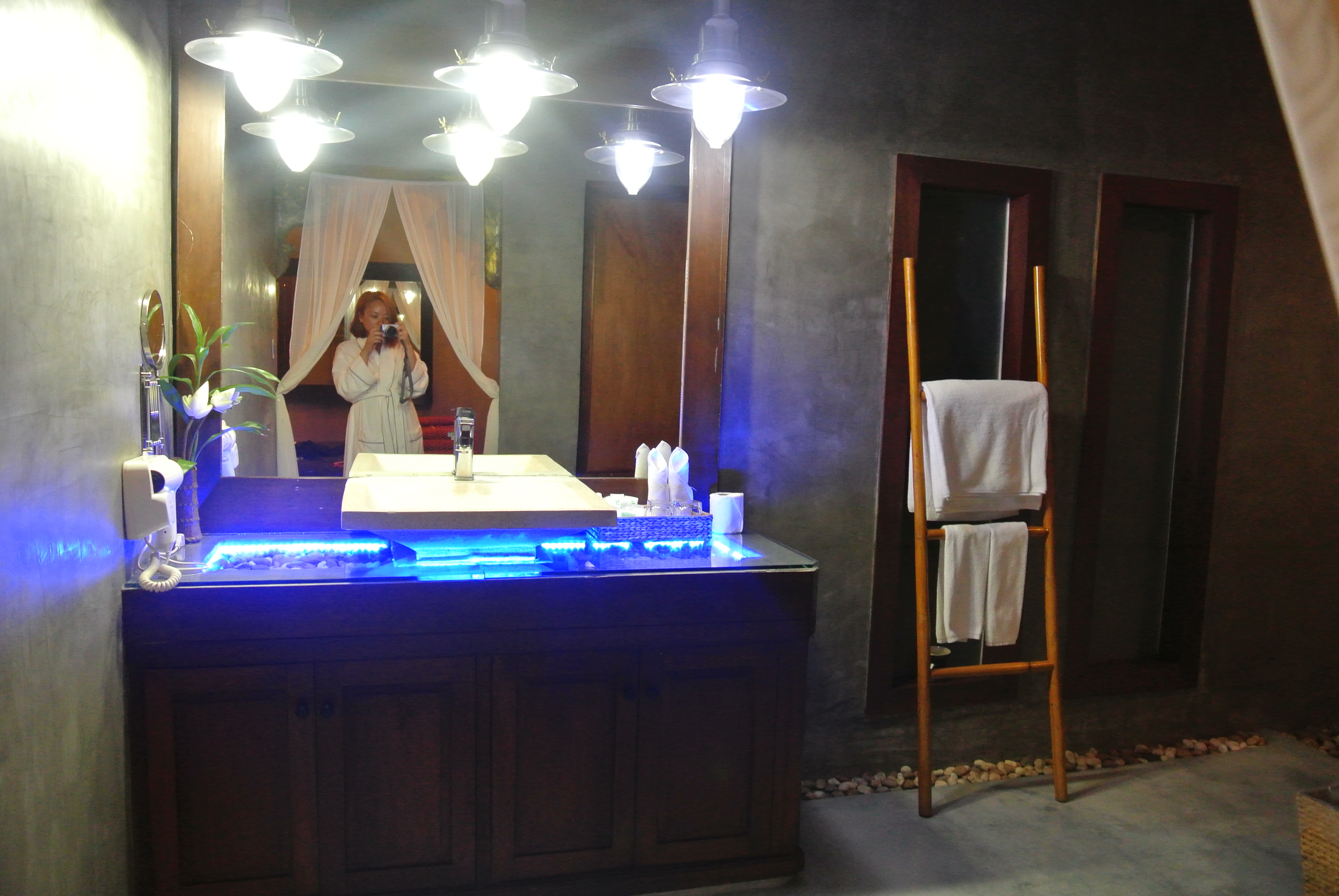 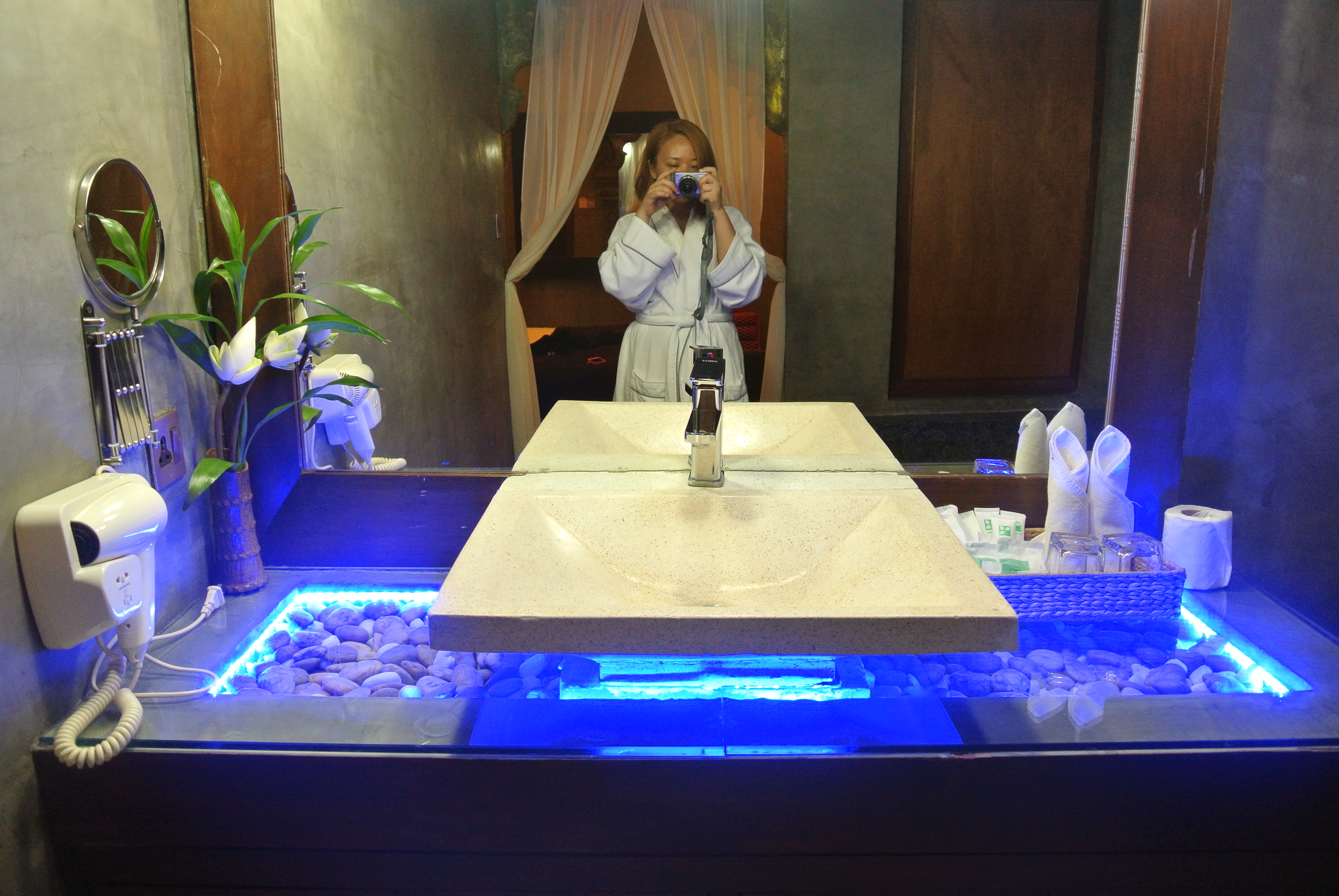 I am pretty confident I’m not the only one who stays in hotels and hoards the toiletries. I use those when I have to overnight at someone else’s house, go camping (nah just joking, I never go camping), and other similar occasions where I cannot be bothered by bringing my full-sized toiletries. I come back to my room every day with everything restocked (even the two bottles of complimentary water that I bring to the tours – water is expensive!). 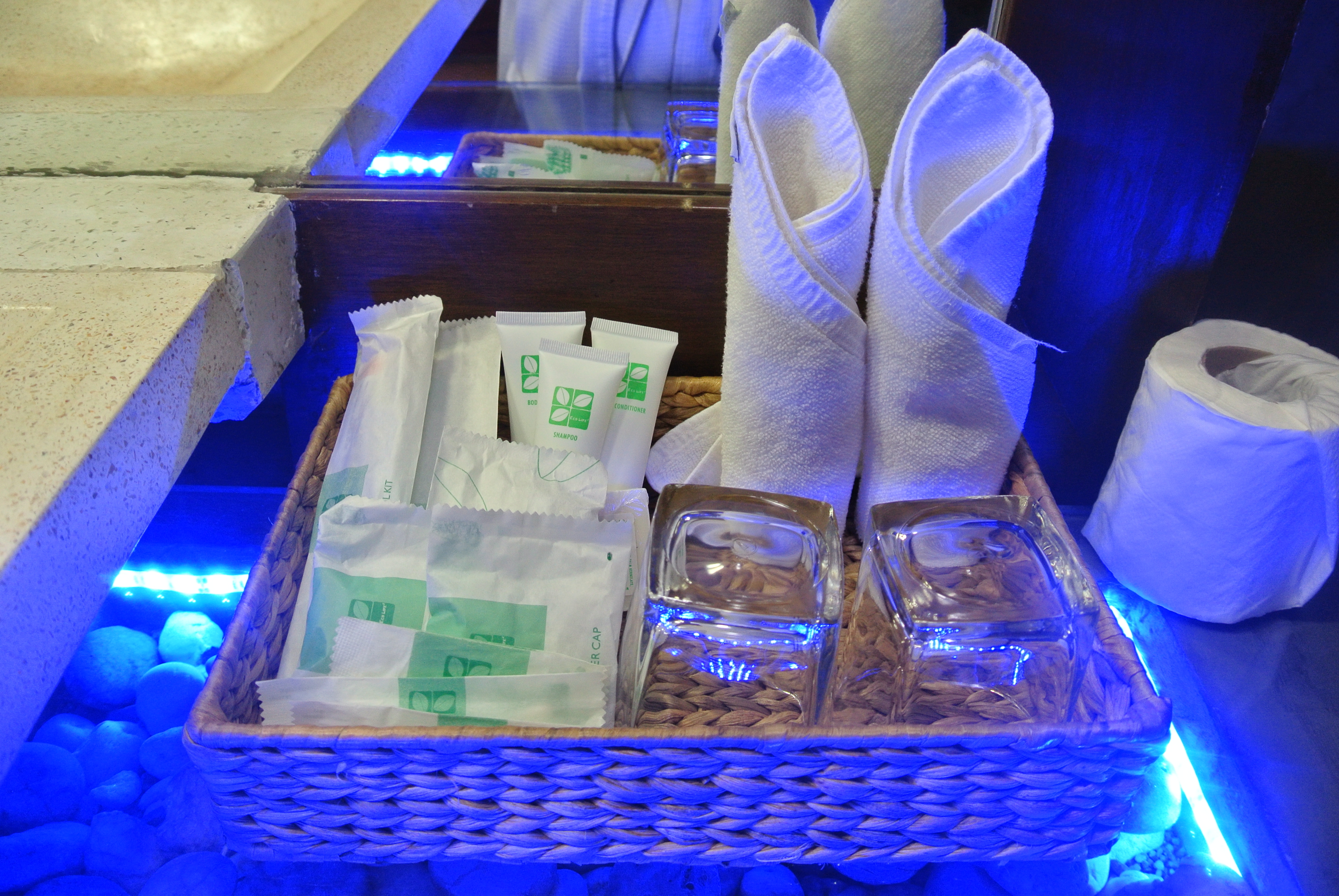 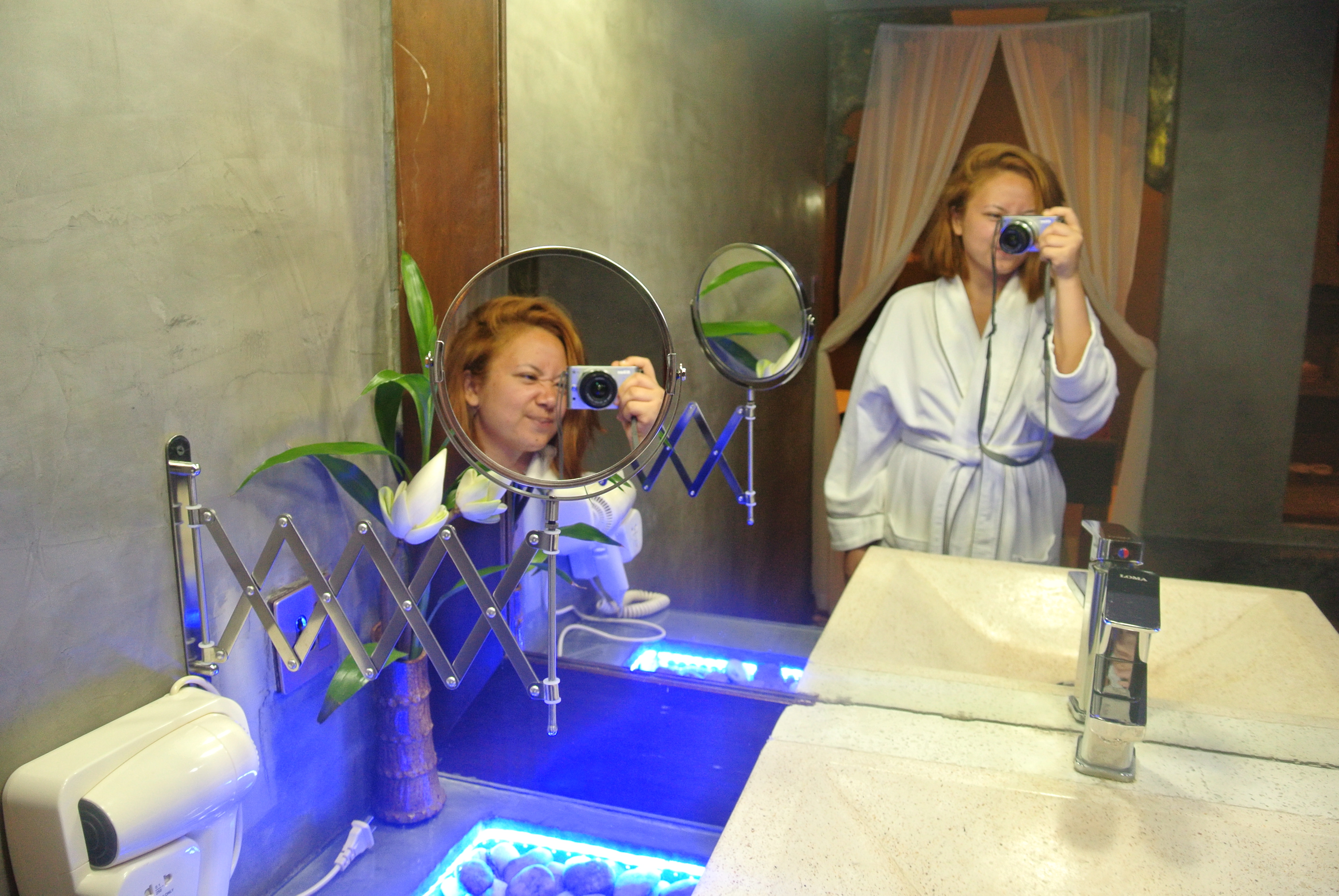 I may have had the “smallest” room but it was not small at all! You can also watch the TV from the tub. Everything works perfectly except the wifi which had fluctuations (they already called the company when I raised this) and they were in the process of fixing the doors when I was there. 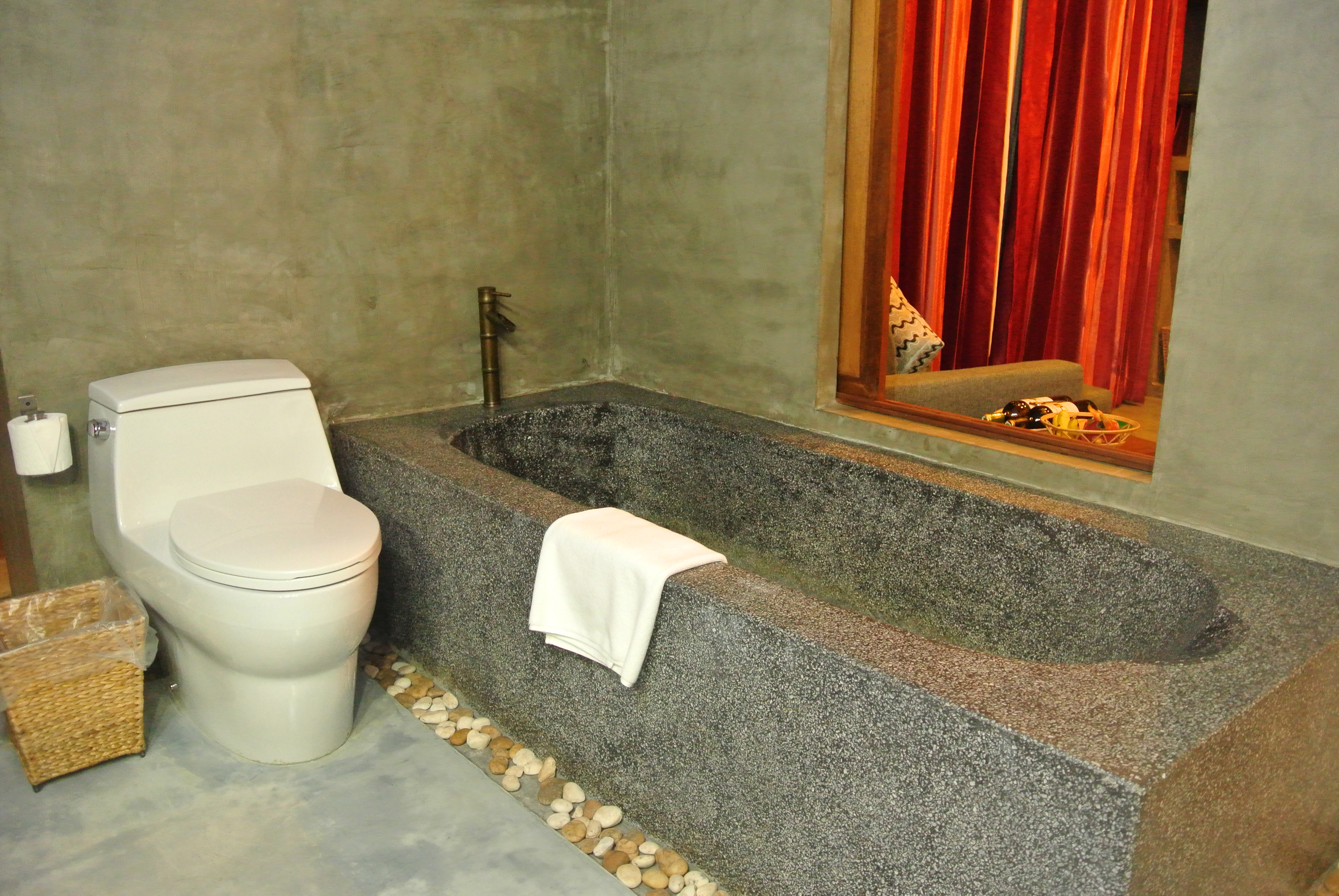 I was tuned into FOX Crime, watching CSI, while the hot water helped relax all my muscle tension. This is the life I never knew I wanted. 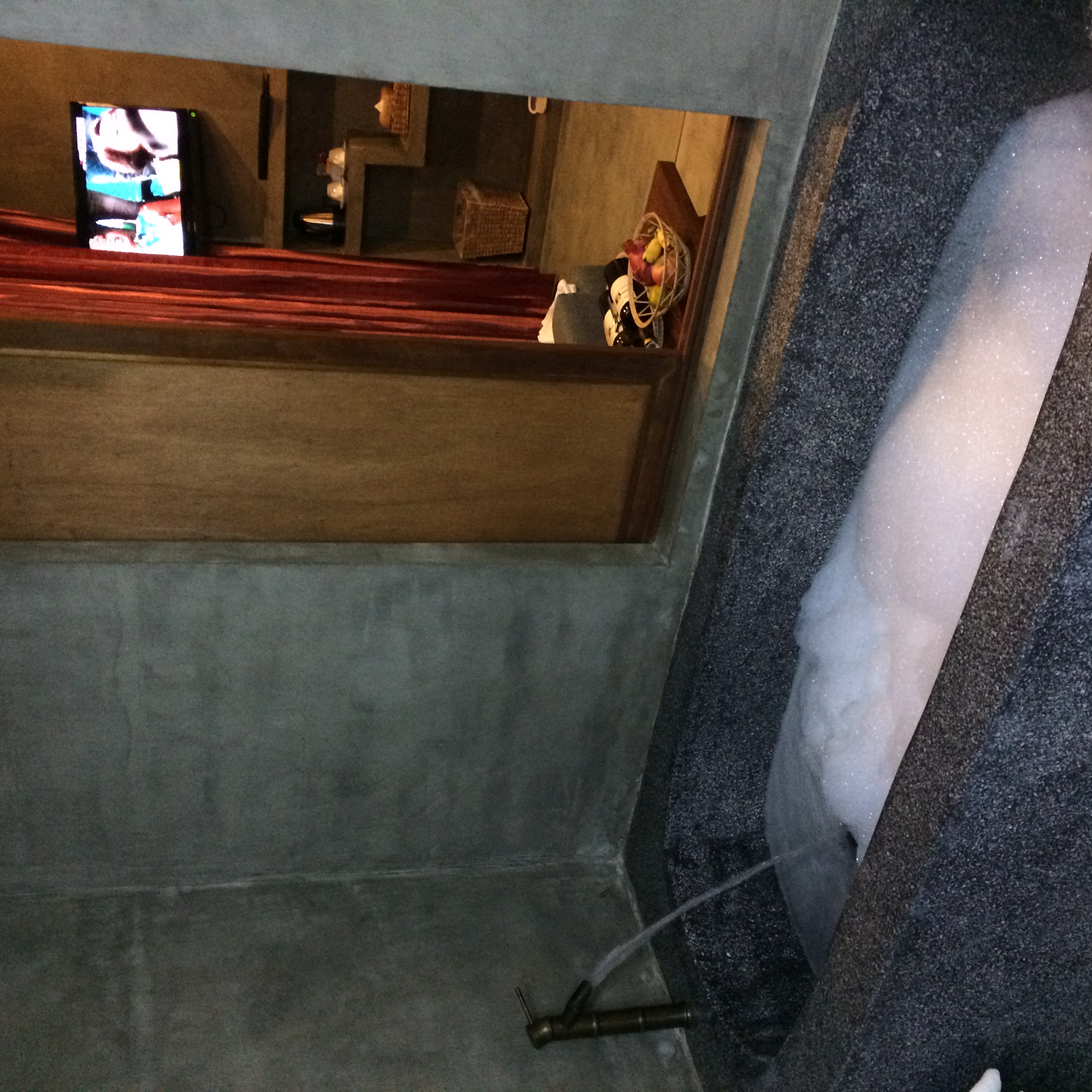 A separate area for the shower. 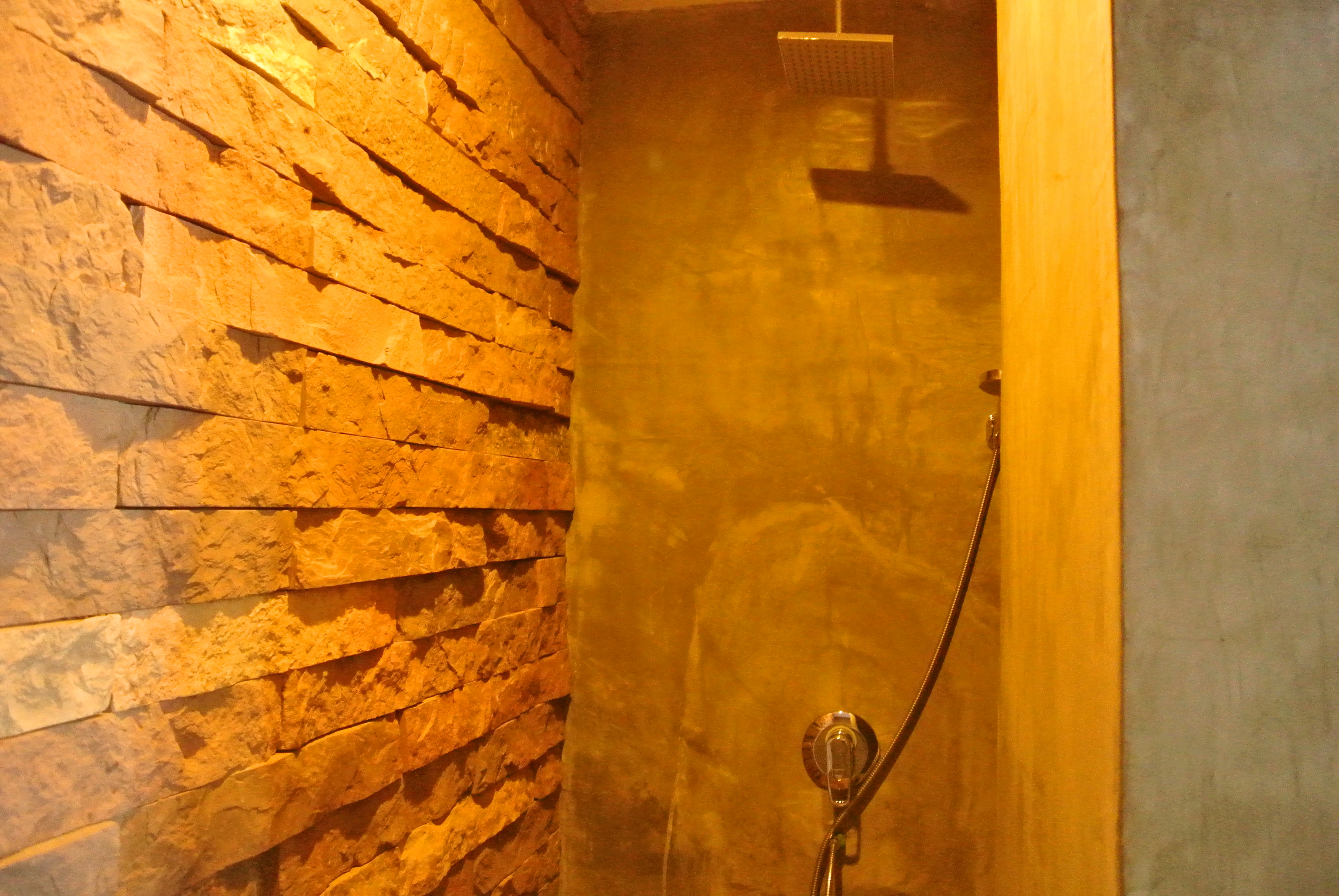 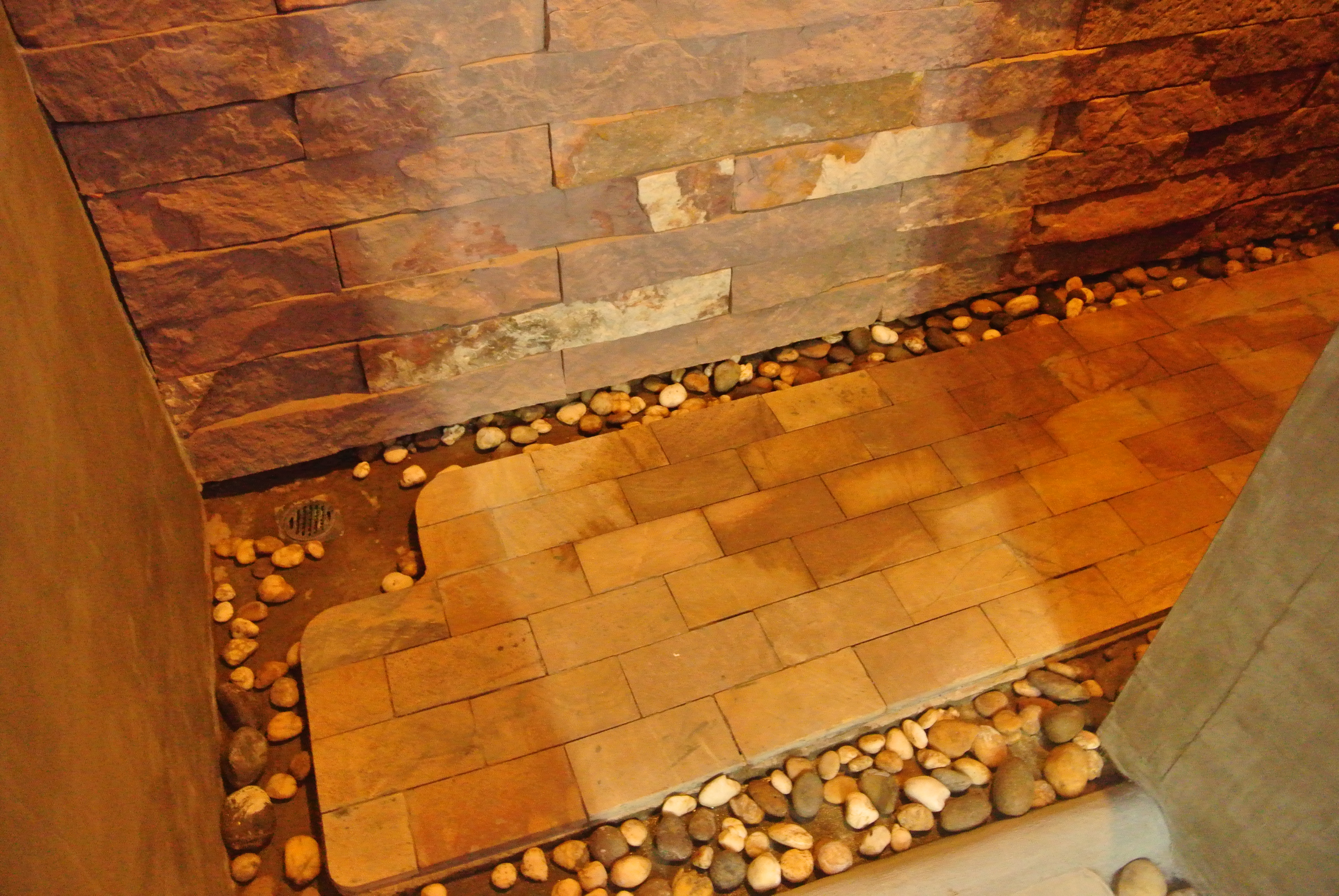 It’s a new hotel (I think they just opened this year) so nothing looks worn out. Plus they only have nine rooms in total, which is perfect for me because I hate the feeling in crowded hotels, preferring intimate ones. There is a sundeck over the pool where you can sunbathe. 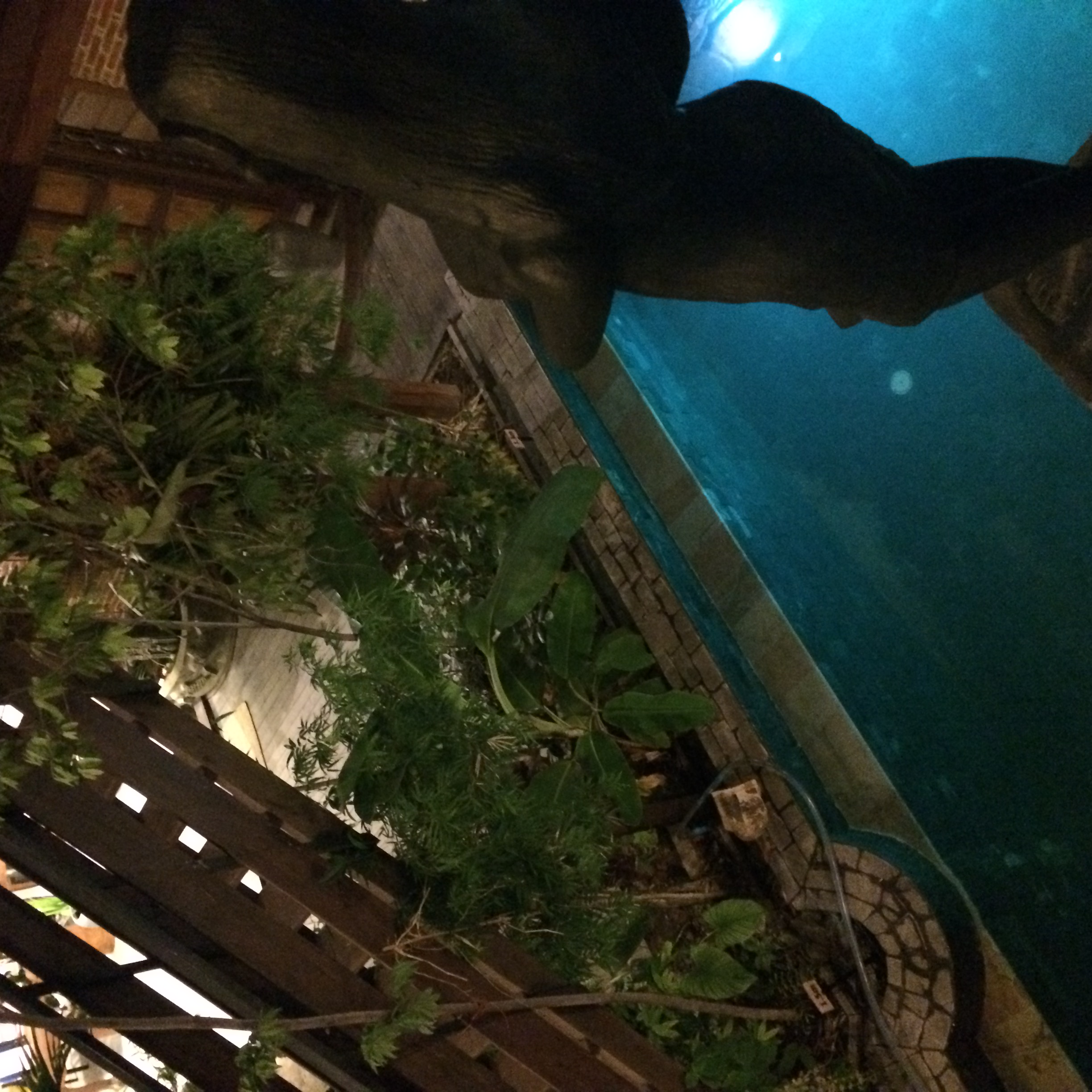 The pool beds beside the pool are perfect for relaxing.. I may have fallen asleep after swimming. 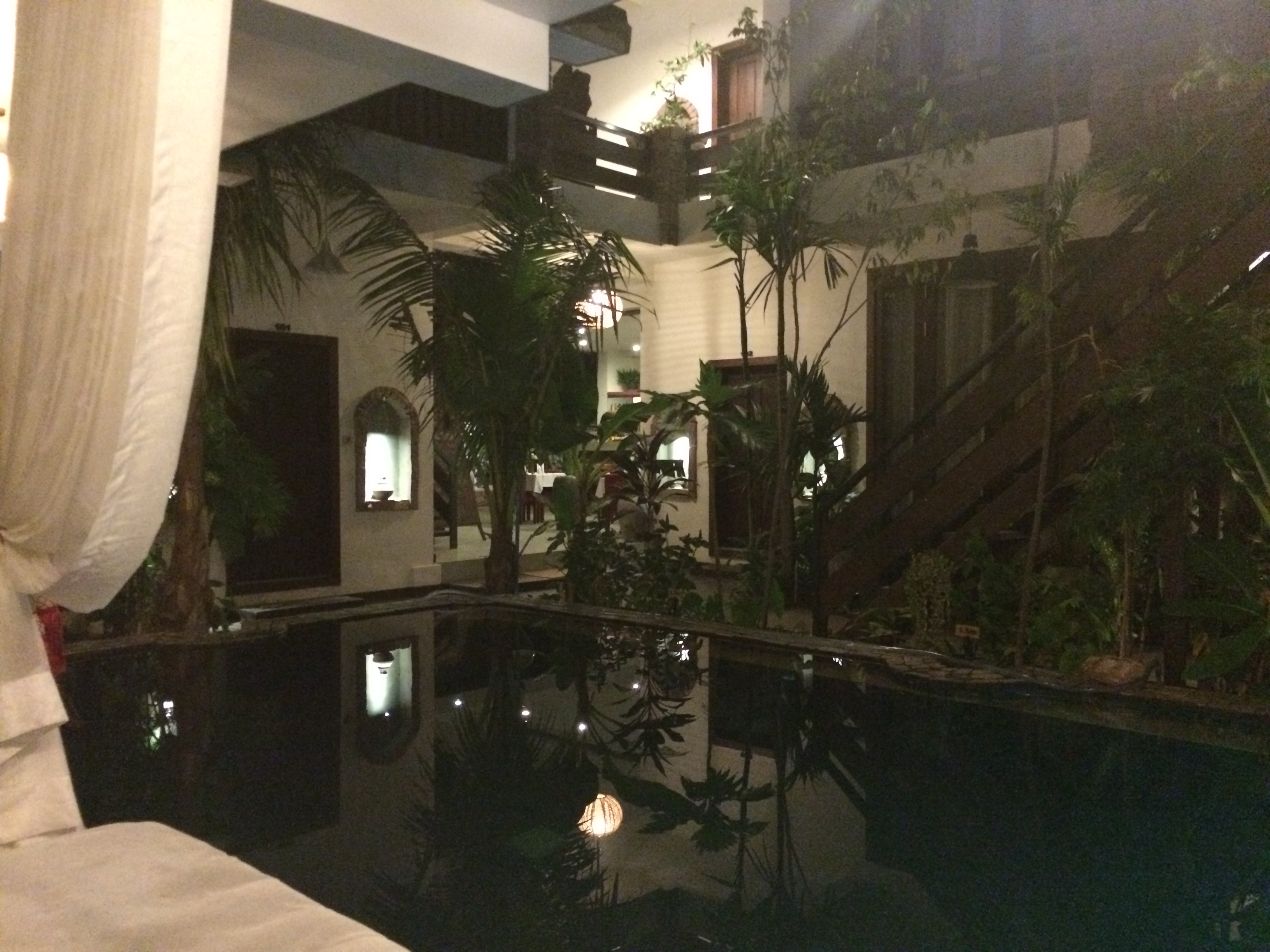 When I finished doing my laps, I found a glass of juice beside my things. Little thoughtful things like that had made me recommend this hotel to all my Siem Reap-bound friends. 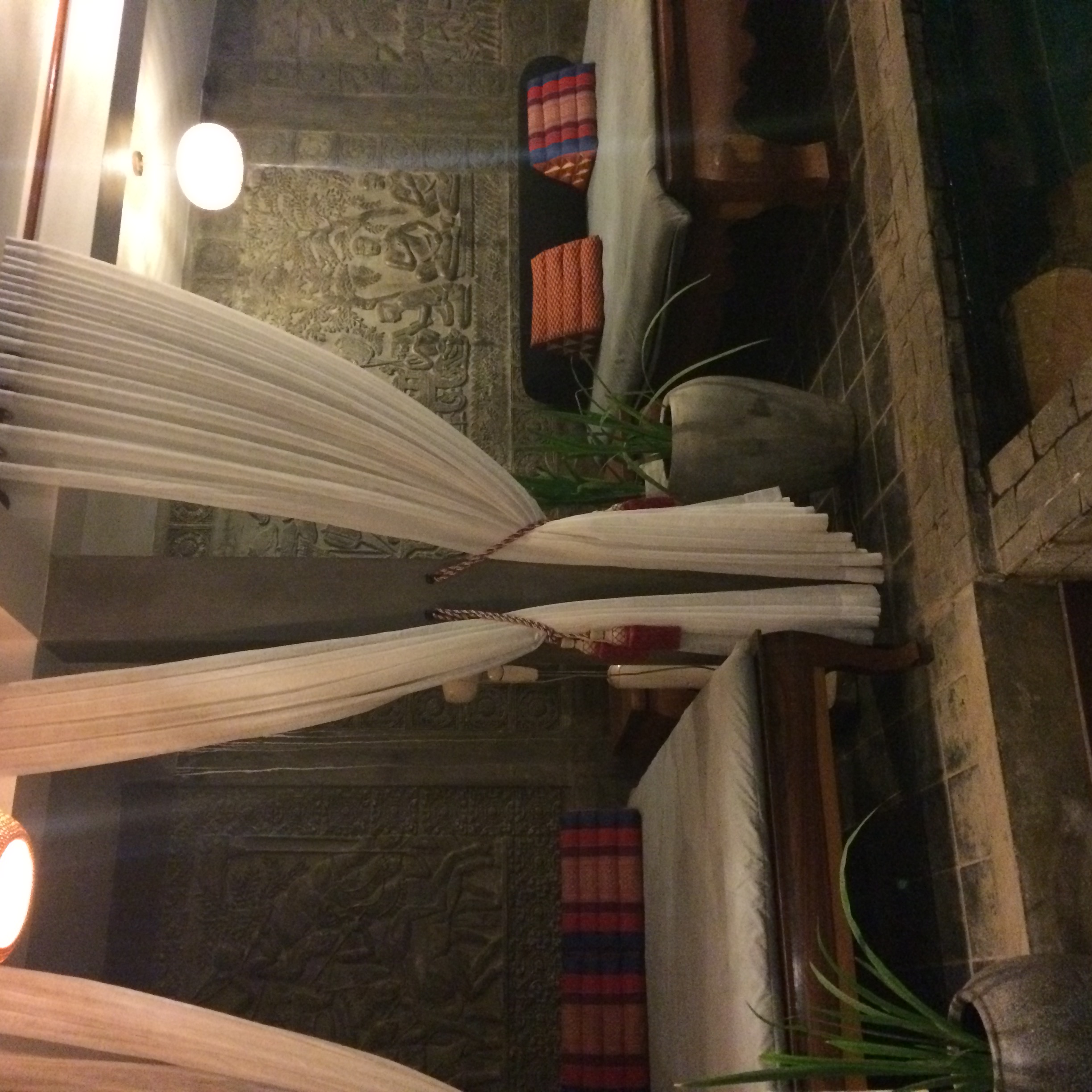 The elephant faucet in the shower room and toilet beside the pool is so cute too! I wished I could bring that home. 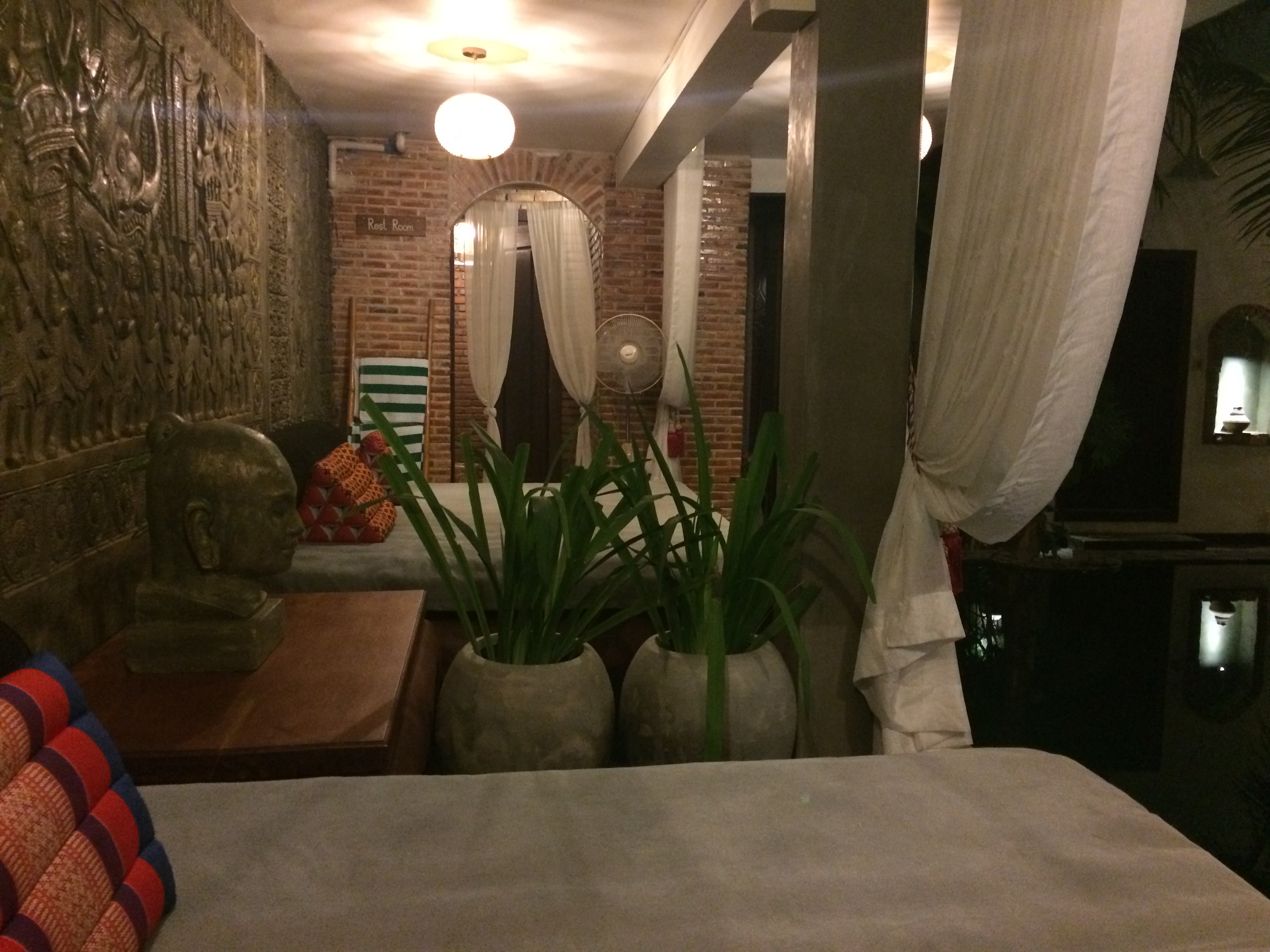 The cherry on top of this great hotel is the staff. I like good service, especially when I’m paying more than I usually do, and the staff is very attentive! You can call them anytime to arrange a tuktuk/tour for you, provide suggestions on where to eat/shop/how much something should cost/etc. I am quite fickle-minded and I also got sick in the middle of my stay that I had to rearrange my tours and cancel one (unfortunately) but Somnang was super understanding about it. On my last day, my flight was late in the evening, so they let me hang out in the pool even though I already checked out (with complimentary passion fruit juice and chips). Everyone from housekeeping to the restaurant to the people at the reception (Marineth, Somnang, the other girl in the morning who recommended the local market for souvenirs instead of Old Market, and the other guy in the evenings – I think his name is Sokpheaktra) are super friendly. 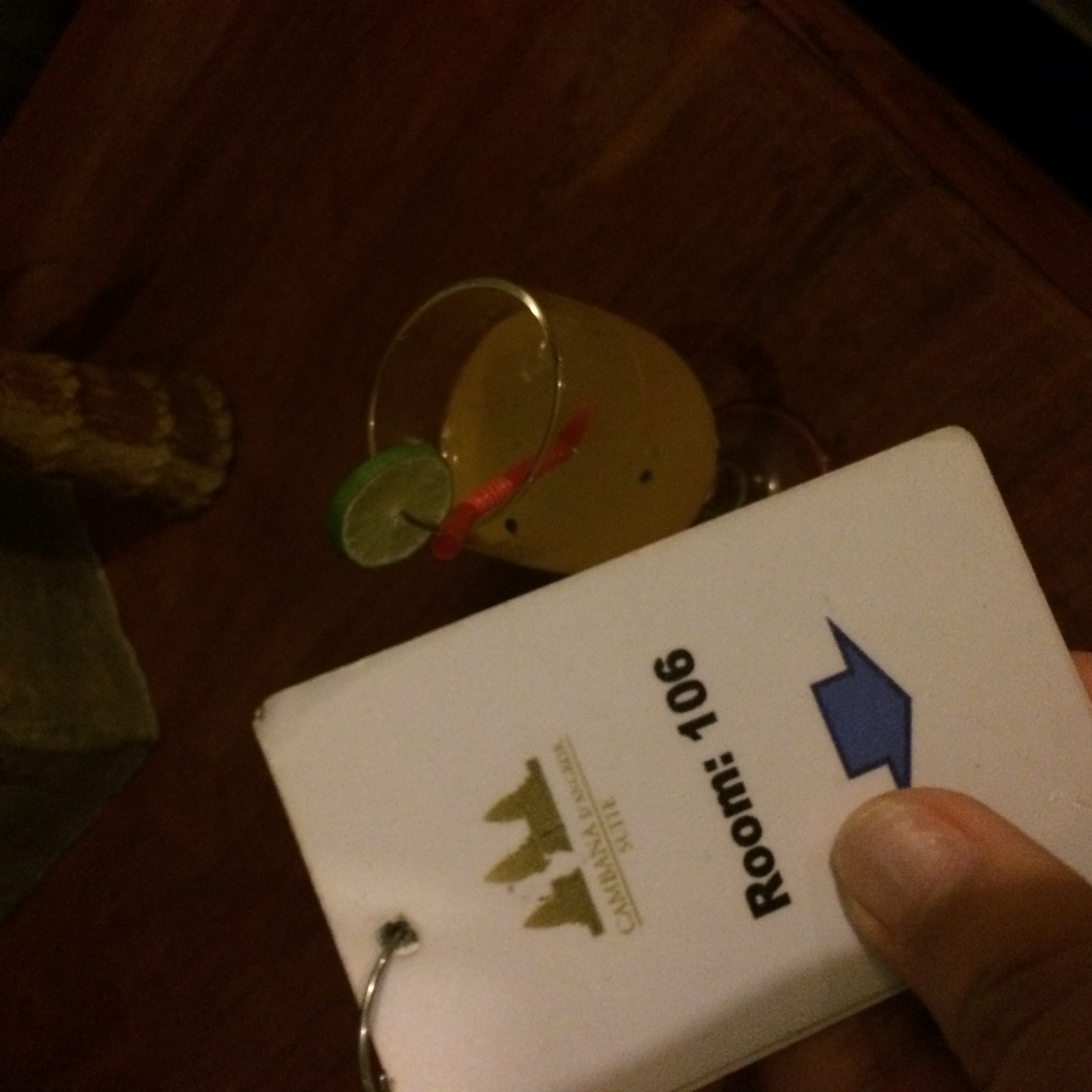 I stayed for four days in this brand new hotel, and overall, I am very happy with how it went. It was so worth the price I paid for it and if I ever come back to Siem Reap, I would probably stay here again. 🙂