The resolve to get all these posts out of my Drafts has strengthened over the weekend so I finally only have this and one more left for Vietnam. After that I can finally move on to writing about the days I spent in Cambodia! The past four months flew by, and the need to keep my mind away from being idle has helped me keep my sanity. Nothing else can drive an over thinker up the walls best than having the time to get the wheels inside your head rolling. Trying to write every day has helped me with that, though. The time I spend writing oils up my rusty machine that produces creativity, and I feel energized to do a lot more (I update my Instagram (@teeshue) more often though so feel free to follow me there!). It also helps reduce this massive backlog – yay for that!

I have read so many articles about the difference between being a traveler and a tourist. I can’t really say I fall into one category because I do like to check out all the tourist spots and eat all the touristy food. I can sleep in a hostel with strangers or stay somewhere with very basic amenities (using ‘very basic’ loosely here), but I’m also willing to shell out extra money for nice hotels. I do book tours but I don’t like the package tours because I like to be in charge of my schedule and itinerary. I want to see everything and I happen to enjoy sitting down in a local cafe to read. So, yeah. I did book a half day tour to Cu Chi Tunnels and had my breakfast while walking on the way there. One of the constants on what to eat in Vietnam lists, banh mi which I bought from a random stall (I just had the guy manning the stall to put in everything lol) for VND 12,000. 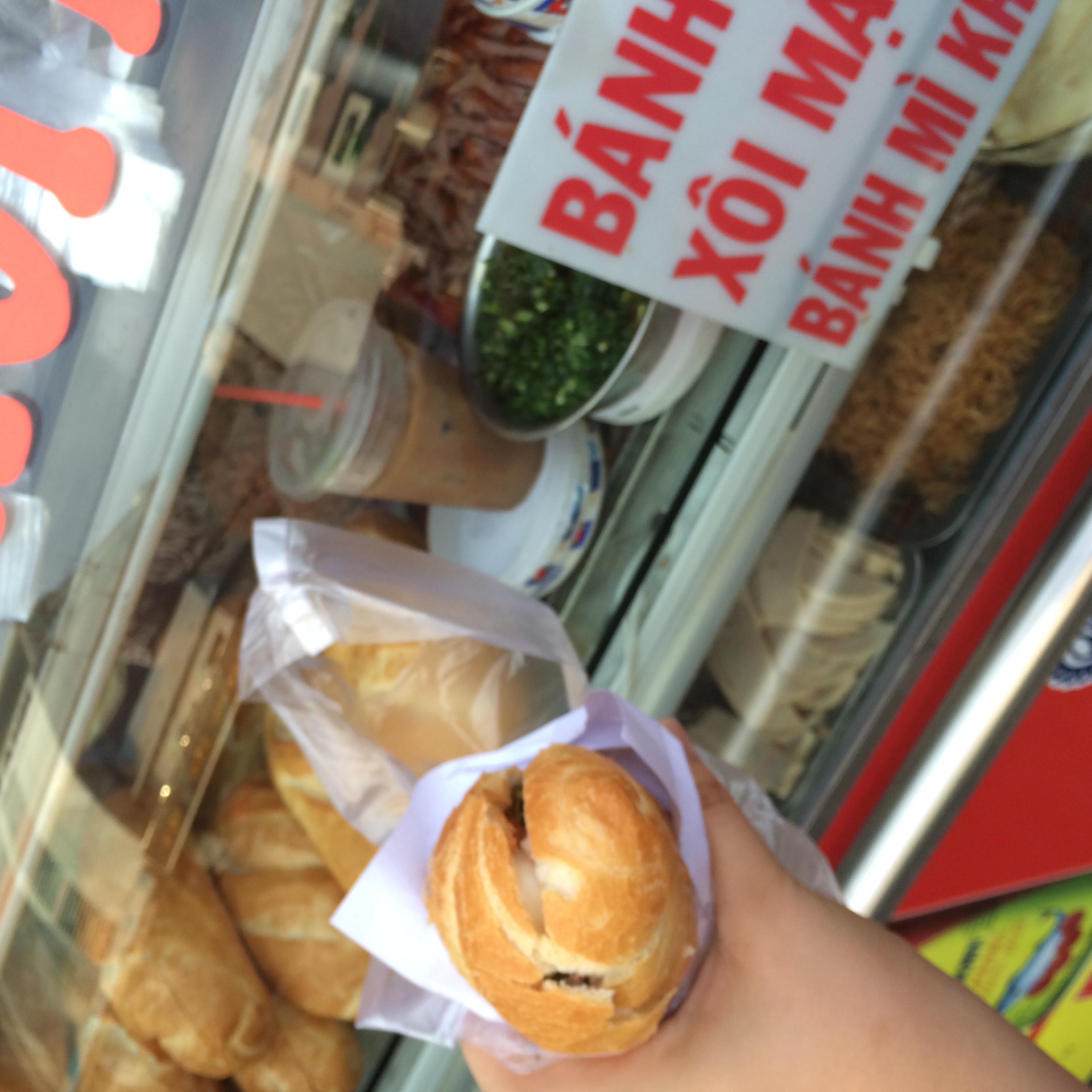 I passed by this woman selling tau hu fa (which is reminiscent of the local taho and with a similar name as well) for VND 7,000. It is soybean pudding with coconut milk and ginger. I was a bit flabbergasted when I tasted the ginger because I grew up buying this from street peddlers with caramel and sago. 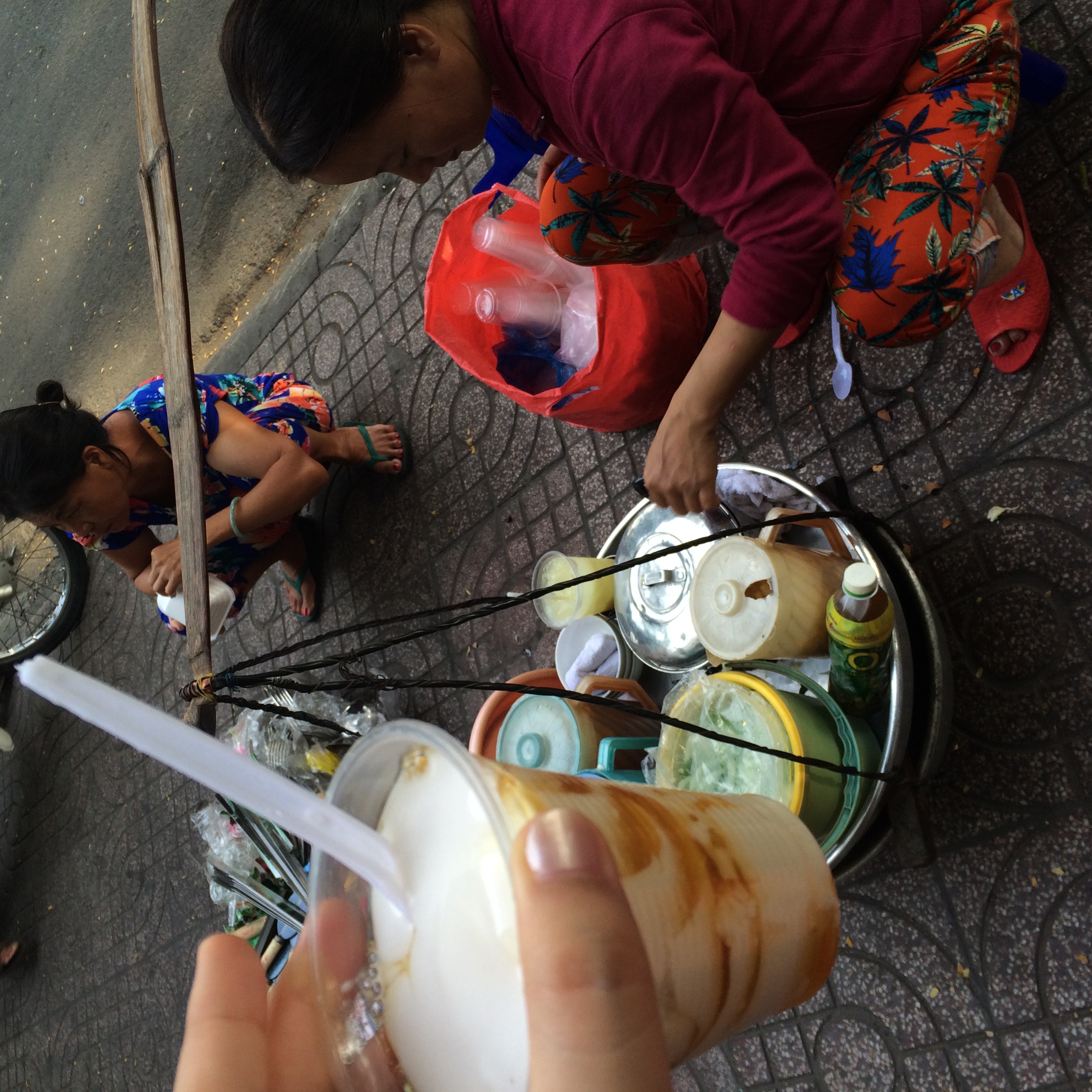 I also bought iced coffee with LOTS of condensed milk for VND 20,000 after checking in and getting my boarding ticket. Even with that much sweet milk, the coffee was still too strong and did a great job of jolting me awake. I saw another tourist pour half the contents of her water bottle in her cup to tone down the taste. 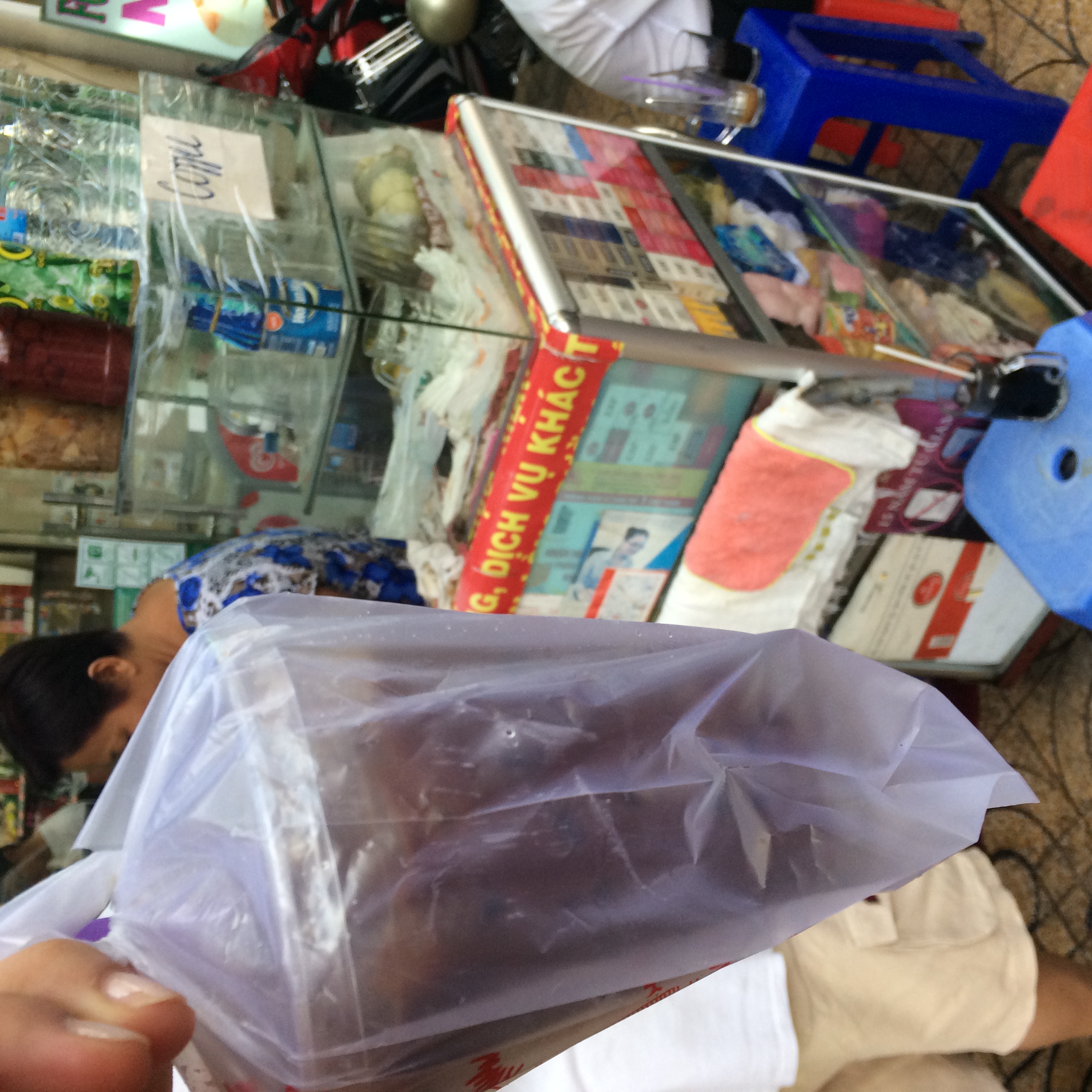 To be completely honest, as much as I support helping a community’s livelihood, I got seriously bored with having to stay at the stopover for Handicapped Handicrafts for a while. My expectation was we will be going straight to the Cu Chi Tunnels. 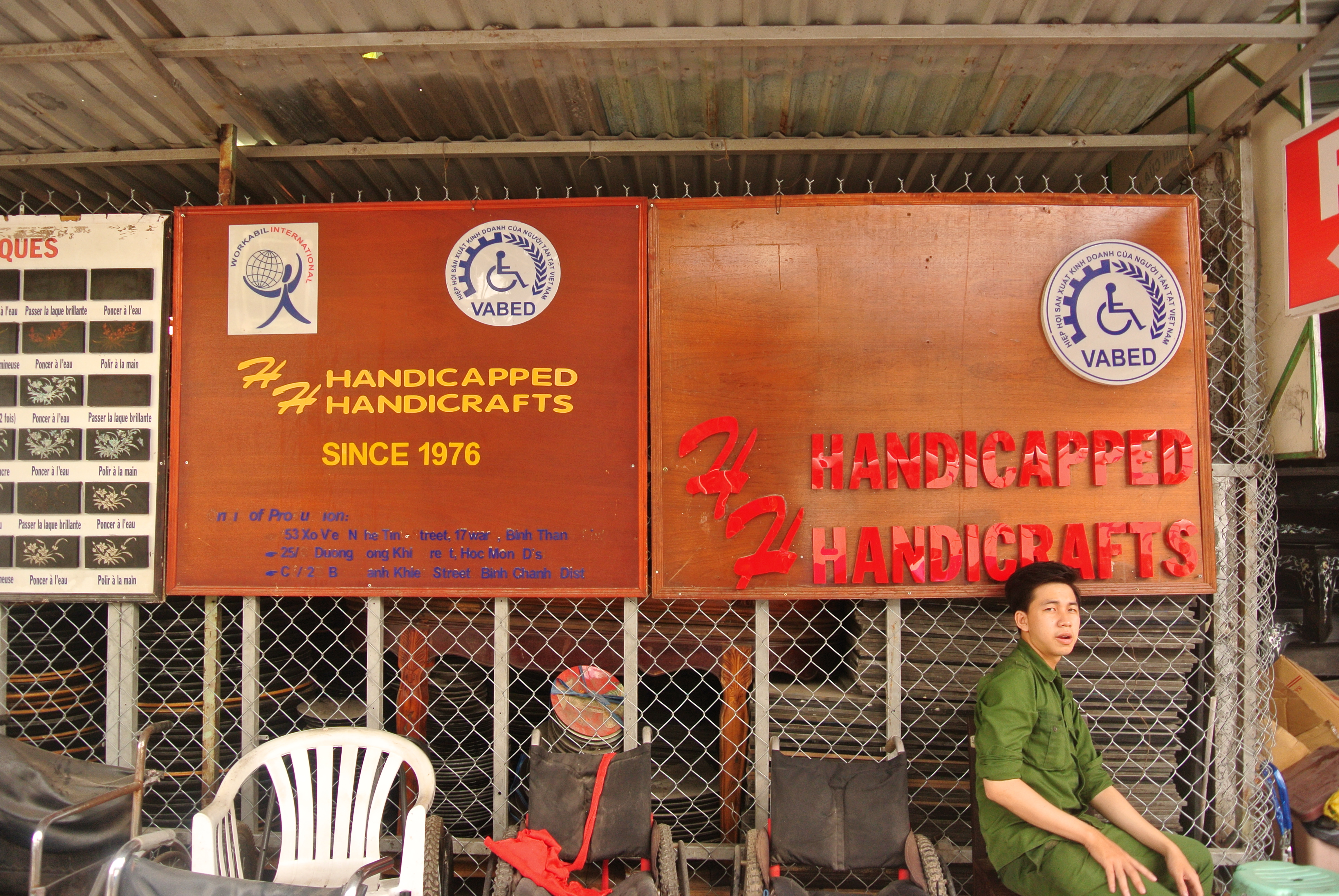 They do show you how they make the portraits. They make an outline, and fill it in using egg shells. Yes, egg shells! It undergoes a long process after that and you can see the output in the next photo. 🙂 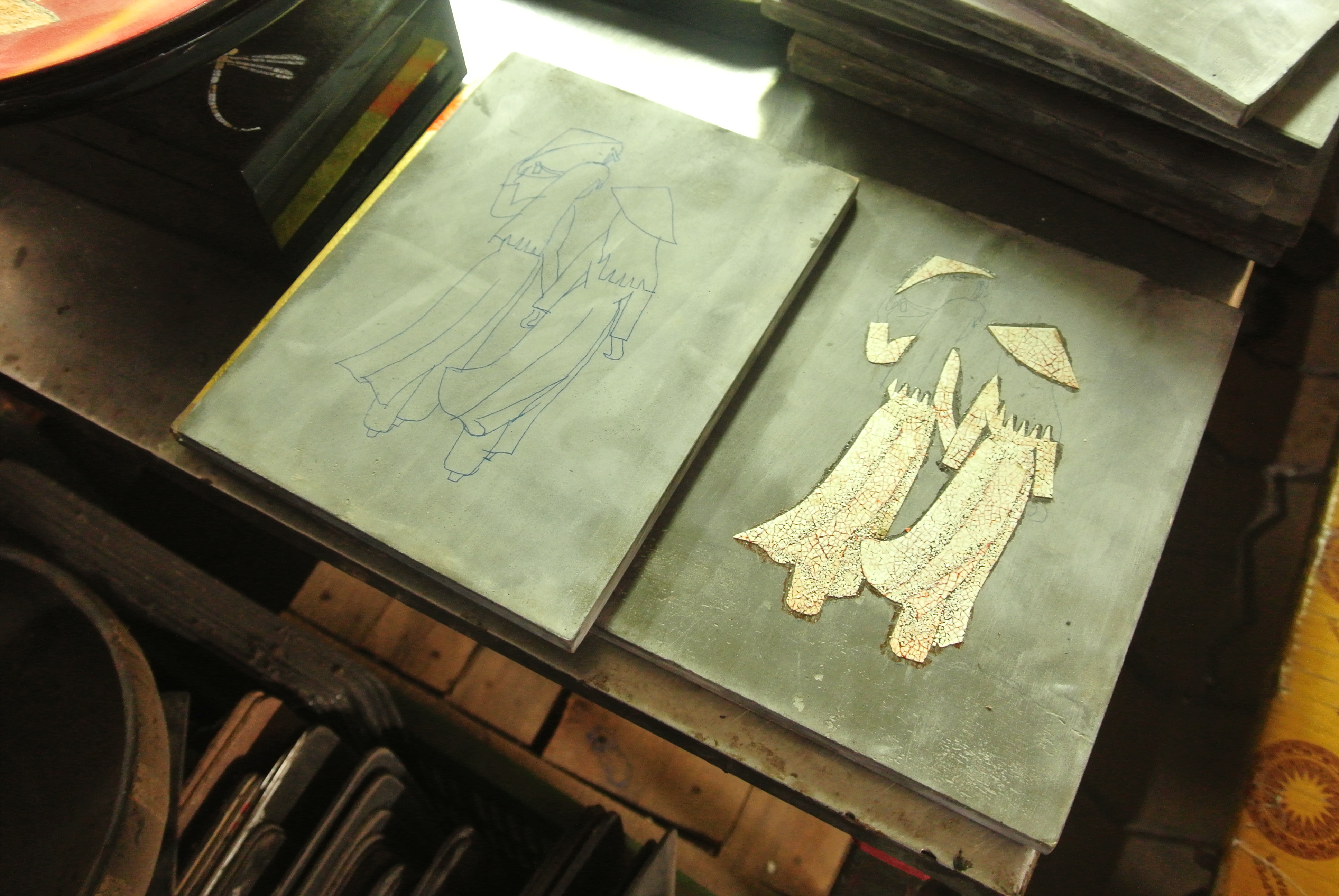 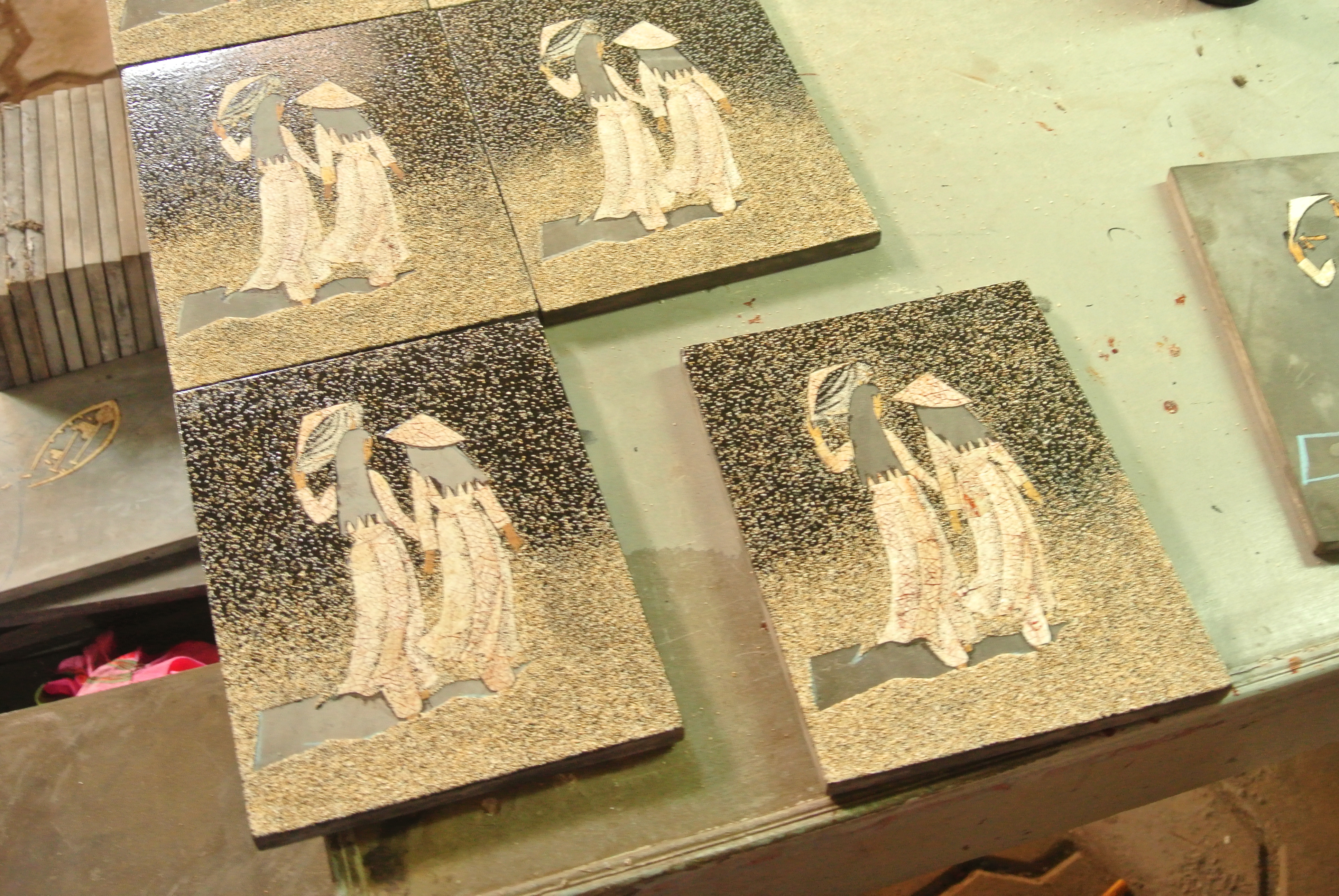 They encourage you to buy something.. by staying in the shop for a long time (it may have only been 30 minutes but it felt like a while). 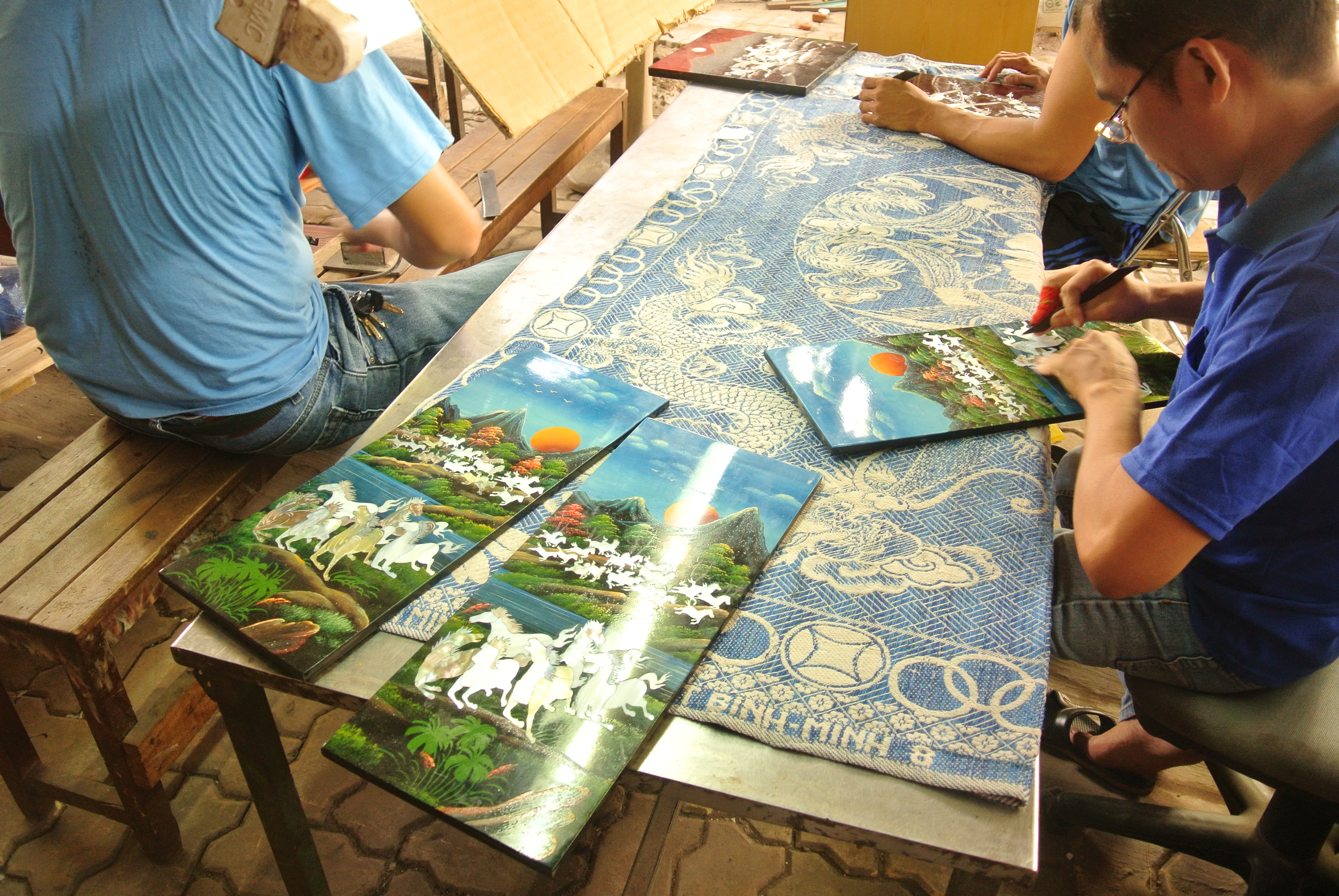 The tour itself only cost VND 59,000 but you have to pay the entrance fee to the tunnels which cost VND 100,000. The guide collects it before you arrive, or you can pay for it yourself at the ticket booth if you happen not to trust the tour guide. Of course, I went the lazy route and just handed my money over. 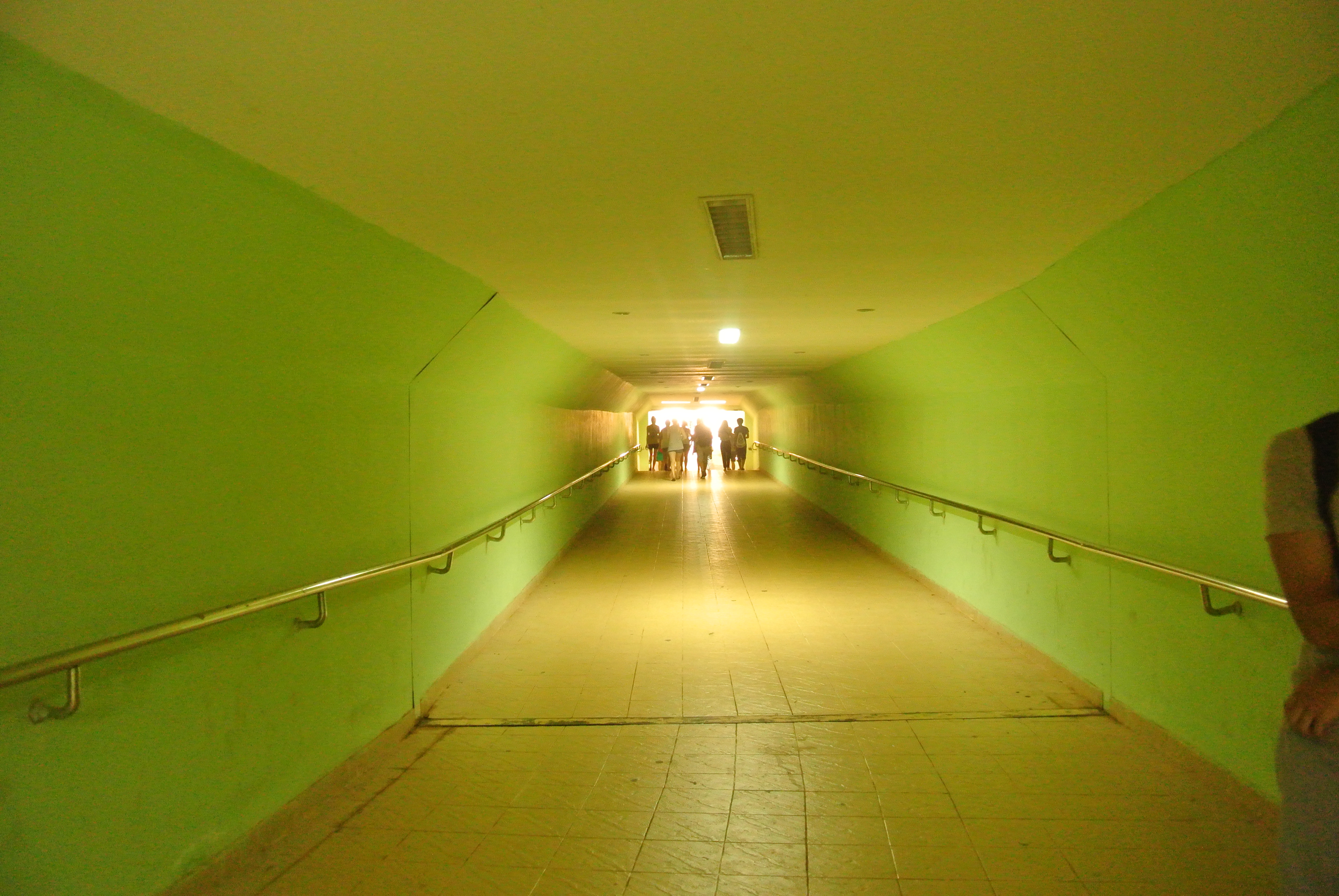 This is one of the many camouflaged entrances to the underground tunnel maze. It is smaller when it was still in use during the war and they enlarged it to accommodate visitors. When the guide asked for volunteers to try it out, I immediately raised my hand and…. oh fudge what the hell did I sign up for? The initial drop was okay until I had to get out and my weak core needed the assistance of an American guy to pull me up and out. Damn. (A Filipina who was on tour with her niece volunteered to hold my bag as you can see in upper right of the photo). 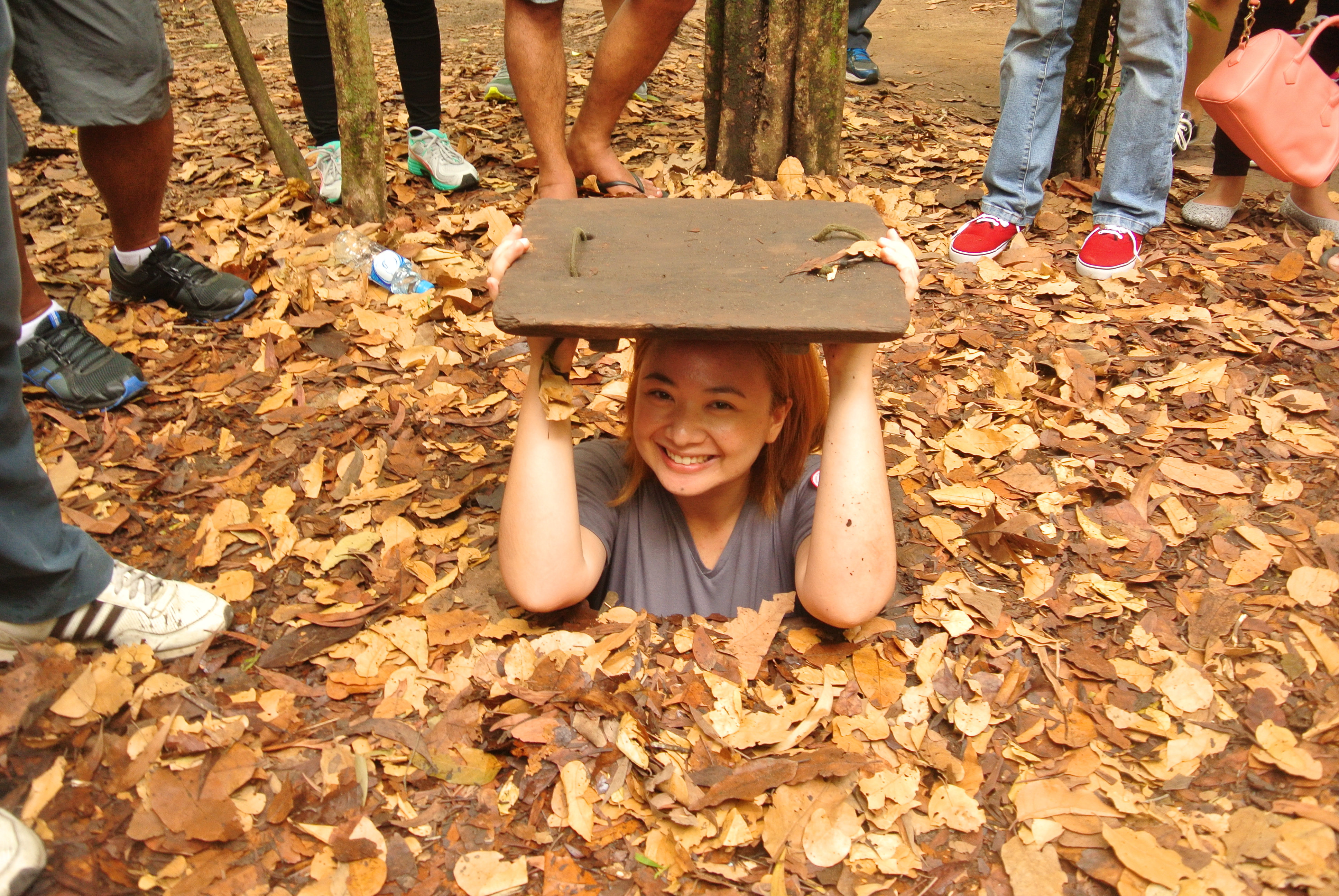 Since this is during war time, the Vietnamese set up so many traps integrated with nature. 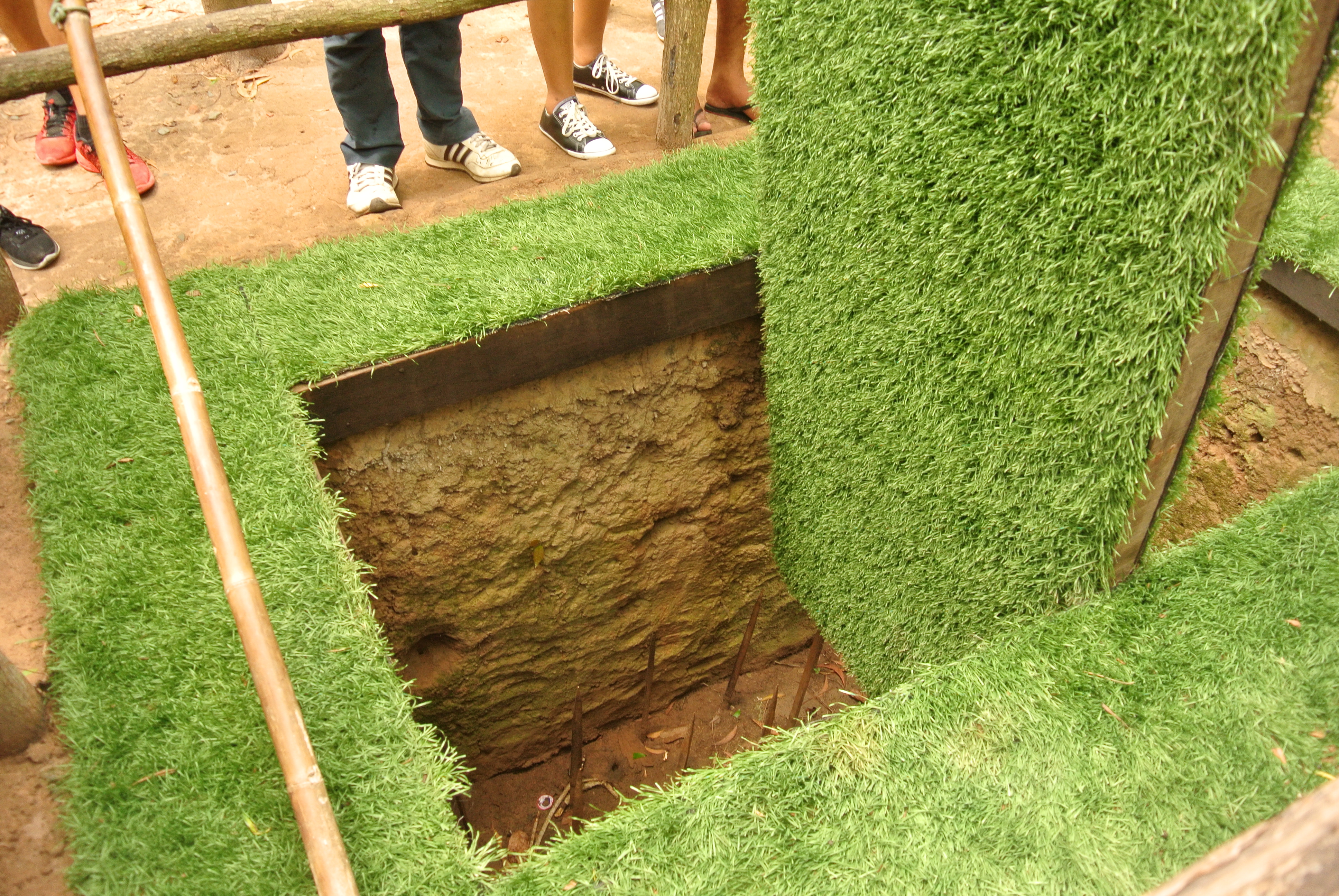 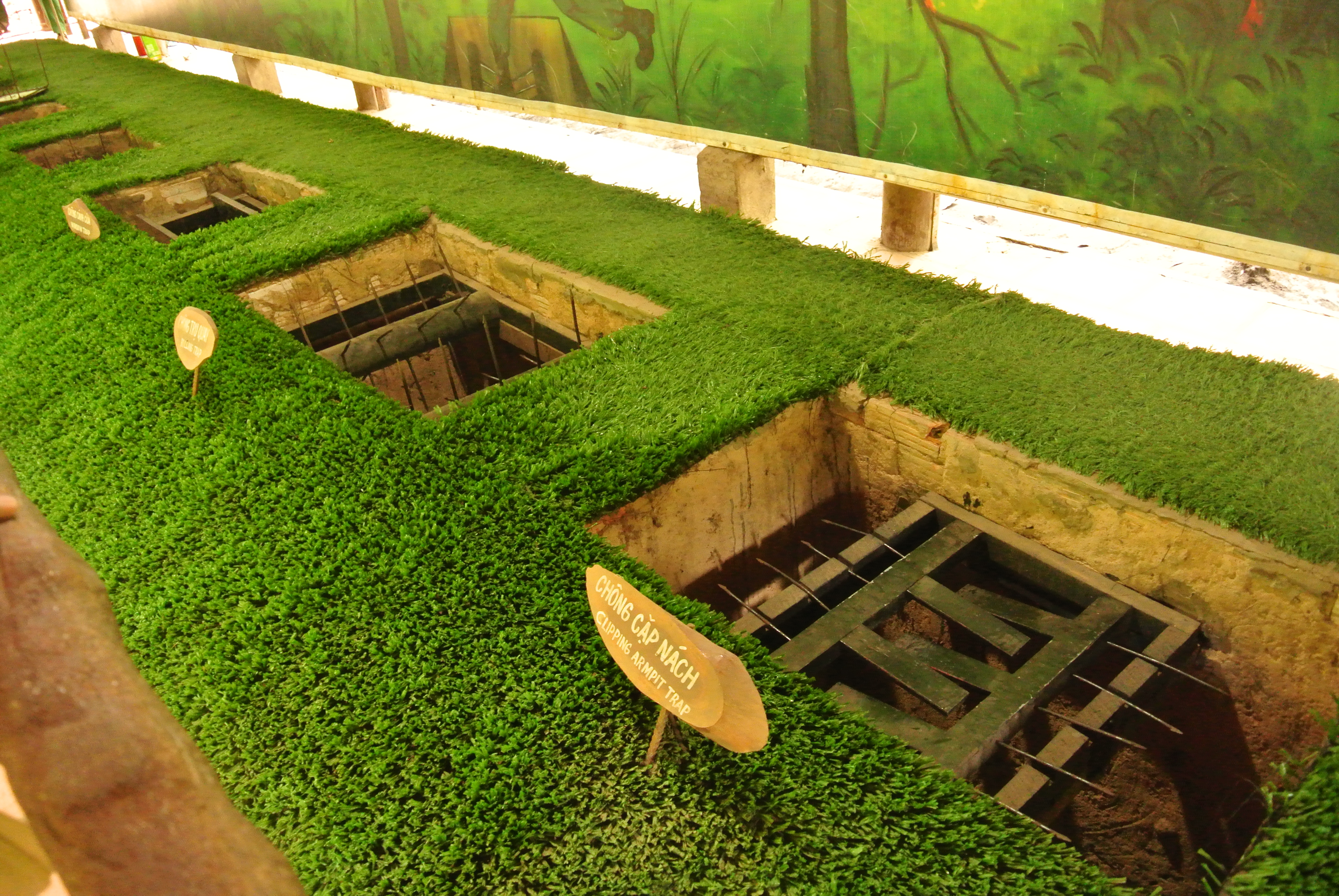 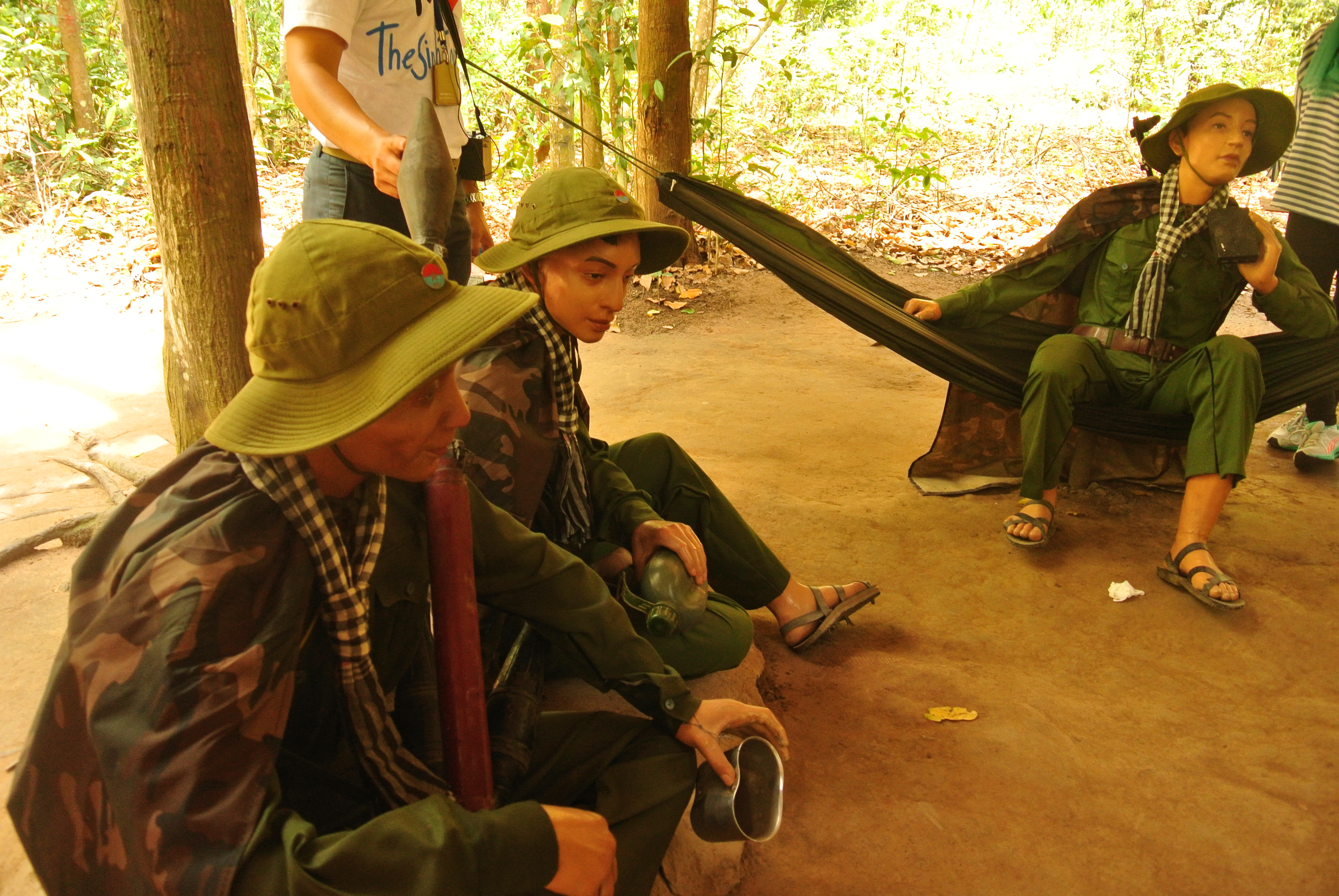 Here are the air ducts that provide oxygen inside the tunnels. The invading party used dogs to sniff this ducts out so they can barricade it while the Vietnamese put pepper to avoid canine detection. 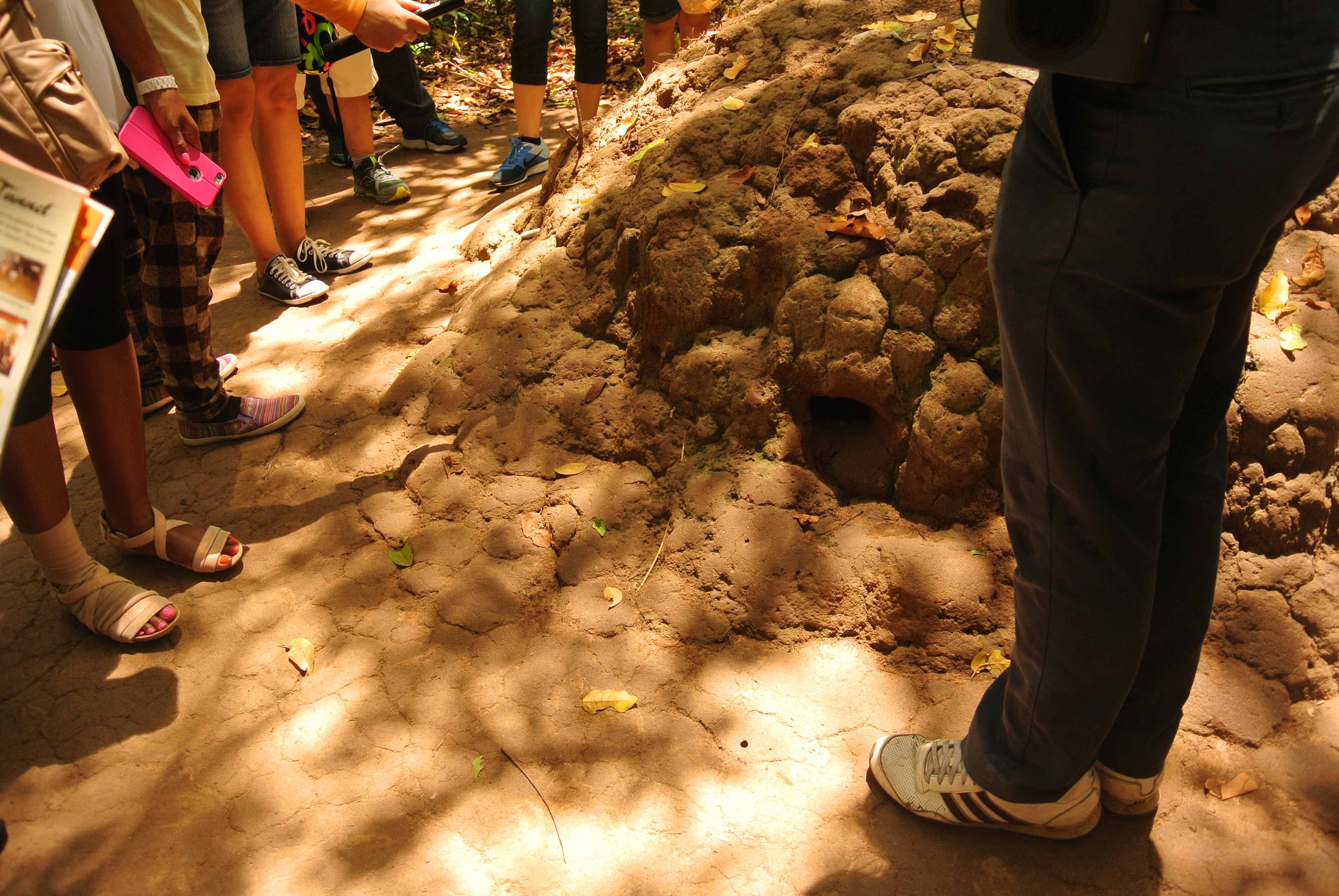 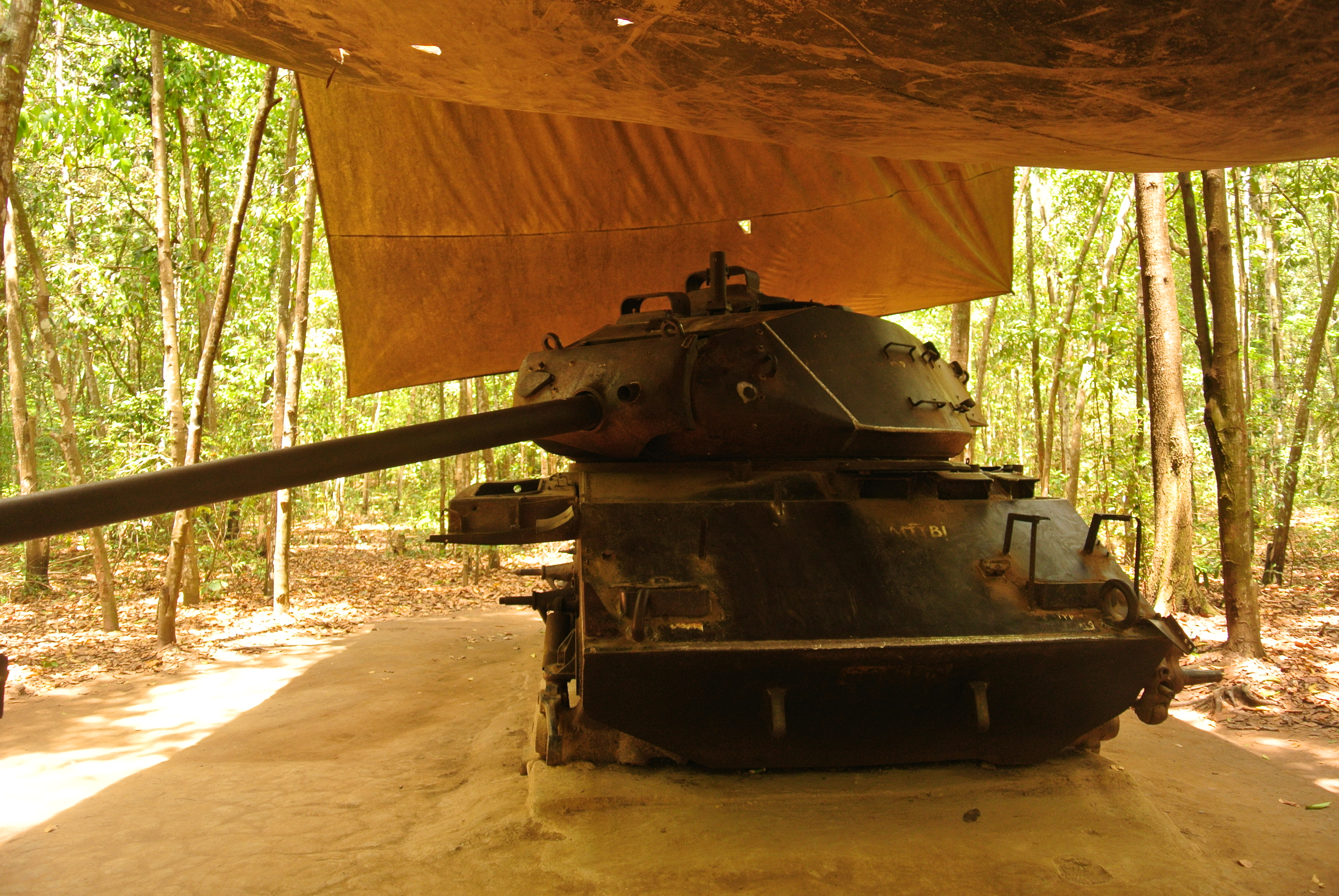 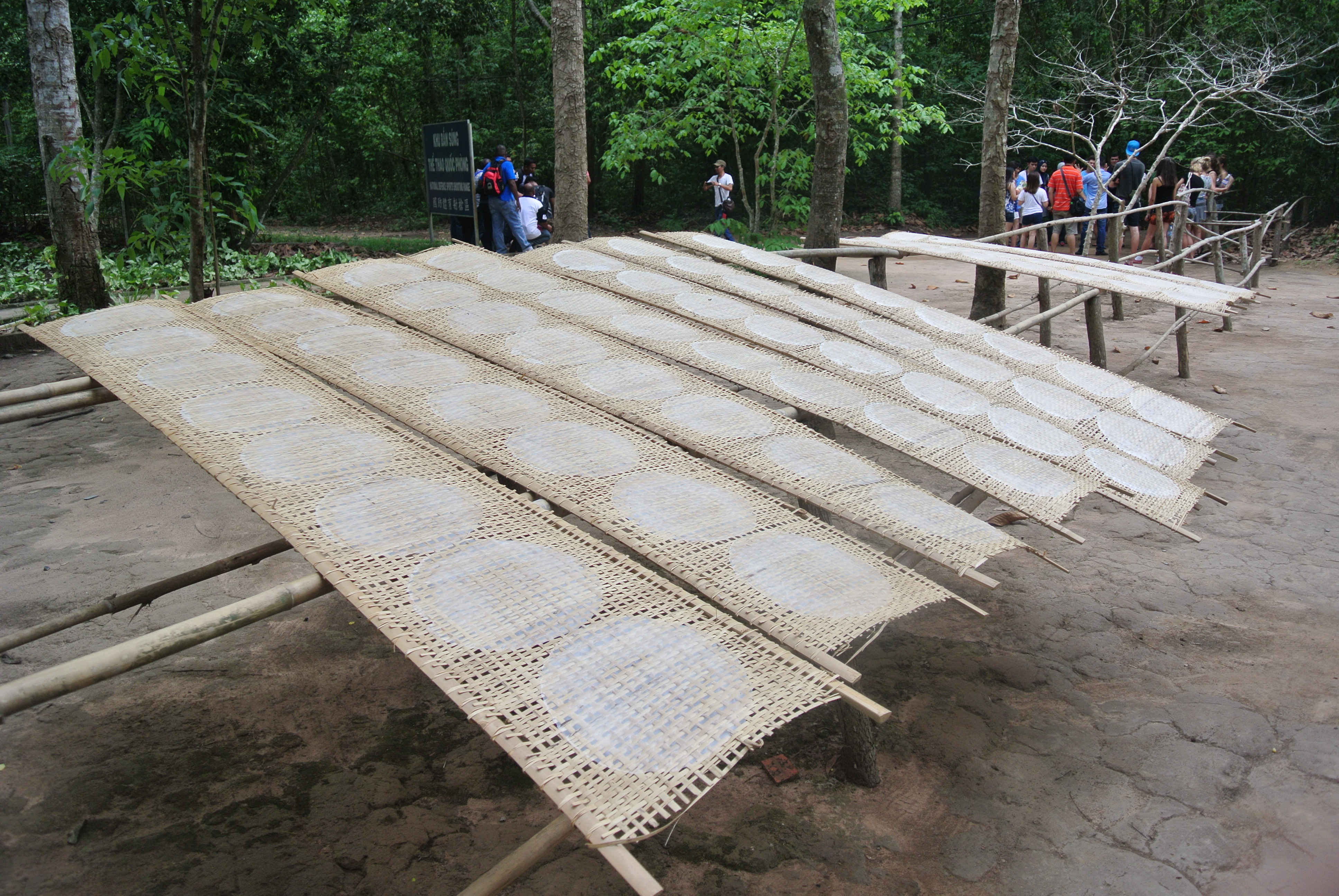 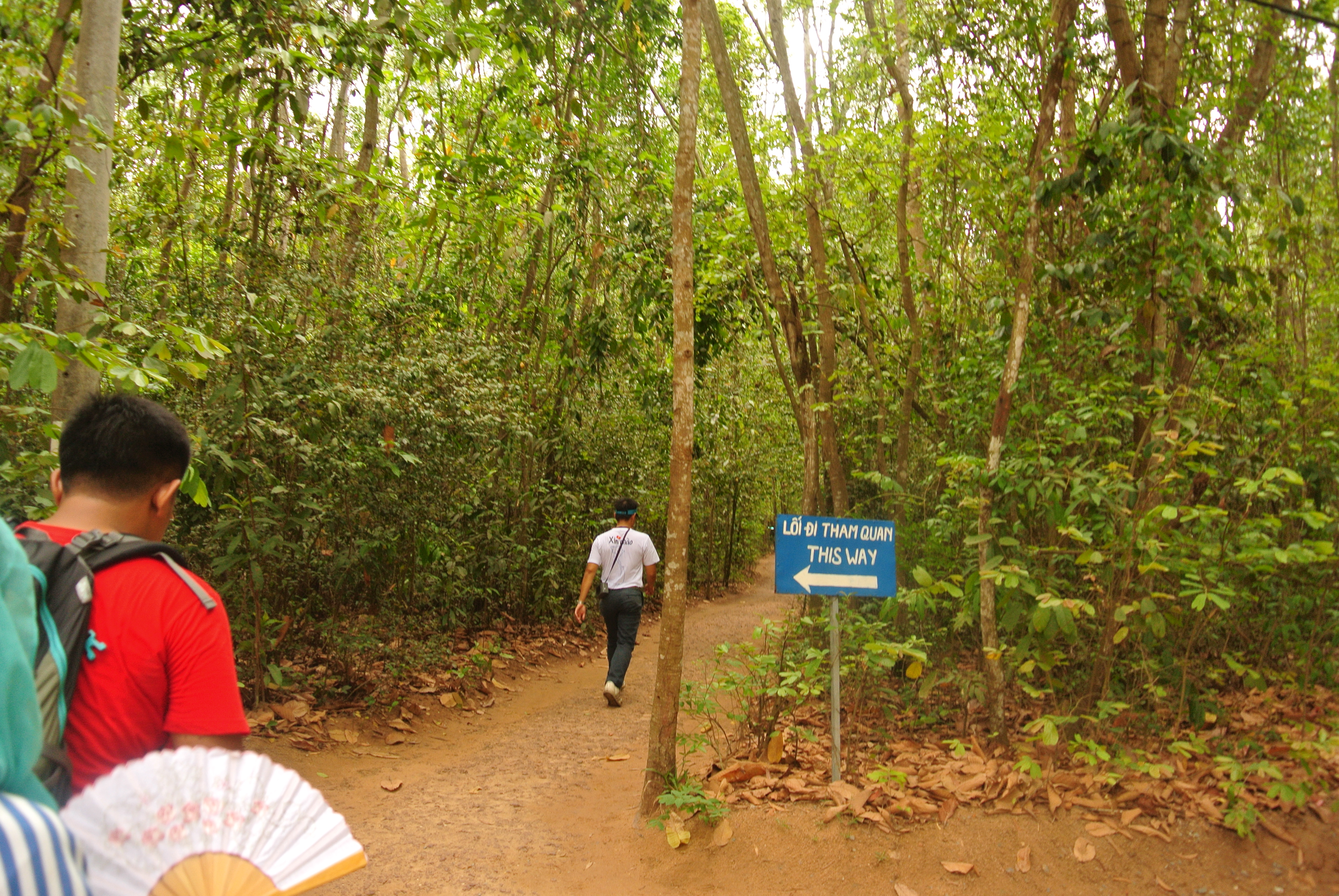 The guide asked the entire tour group which of us wanted to crawl 150 meters and again, I raised my hand along with three other tourists and another guide. The rest of them were going together and crawl 20/40/60/80 meters and exit at different stages while the four of us entered a different tunnel. Fortunately for me, I was second to the last and the same American guy (who pulled me up) was behind me. There was a point in the tunnel where you had to raise yourself using your elbows and I had a really hard time climbing up, it was getting dark while the guide and couple before us are far ahead already. The guy asked me if I would mind if he touched me and of course, I said I wouldn’t, so he placed his hands on my bum to push me up. I cannot imagine how it would feel like if I had to crawl in that small tunnel while bombs are hitting the ground above – especially with my barely existent arm strength. I was sweating like a pig once we got out and it felt like I crawled for hours. How fun and exciting! 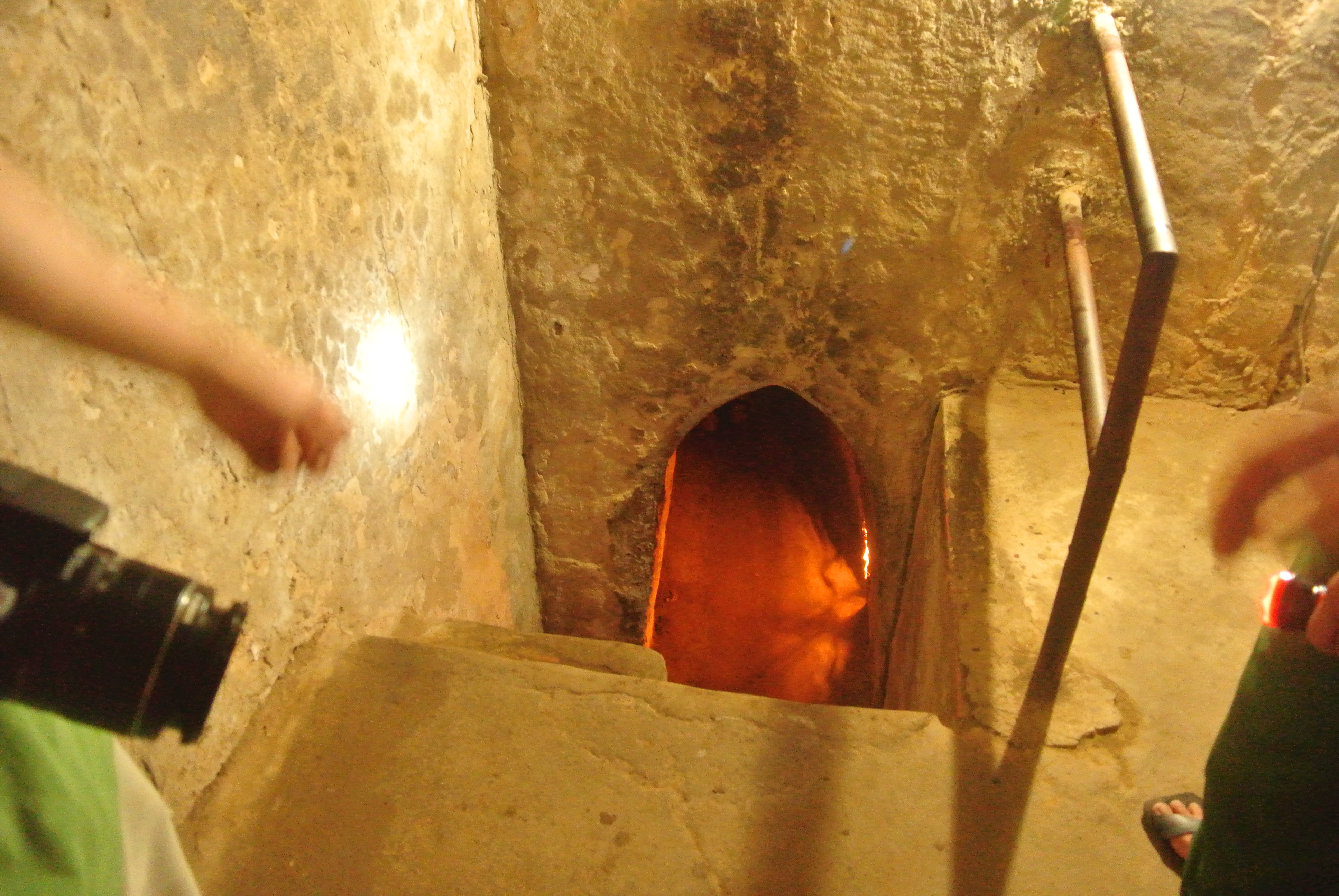 So that was the only fun part of the tour.. And the tour + entrance fee cost more than My Tho and Ben Tre. Honestly, though, I had much more fun with the Mekong Delta tour (crawling aside). During this tour, there were so many people so the waiting time sucked. I do hate waiting. I hope you guys don’t hate waiting as much as I do.. or else I’d lose blog followers. Hahaha!