In one of the classes I attended recently, a girl voiced out how much she hated the word “foodie”. She asked how anyone could claim to actually be a foodie since everyone needs food anyway. That admittedly made me think and from then on, never referred to myself as a foodie. However, tours revolving around food genuinely excite me and I couldn’t care less whatever they decide to name it. This was the case when I was looking for motorcycle tours in Ho Chi Minh. Almost all my friends who went to Ho Chi Minh told me to never leave the city unless I have ridden a motorcycle. XO Tours is the number one bike tour in the city (as of writing, it’s actually #1 on the Tours and Activities list in TripAdvisor), and so even though it’s a bit on the expensive side, I went for it (for reference, I paid $72 for this 5-hour tour, and the next most expensive is the tuktuk I rented in Siem Reap for $25 for the whole day).

Again, I gave them the address to the Airbnb apartment and was instructed to be at the door 15 minutes before I was supposed to be picked up. Only approach the female drivers in traditional blue and white ao dais, as it’s their uniform. I went out the apartment at 5:15 PM, and there was Huong. I was lucky that time since she already toured someone who stayed in the same apartment I did. After a mandatory safety precaution lecture, we left and were the first to arrive at a noodle place, where I met Tai who chatted me up while I sip from a glass of iced tea. 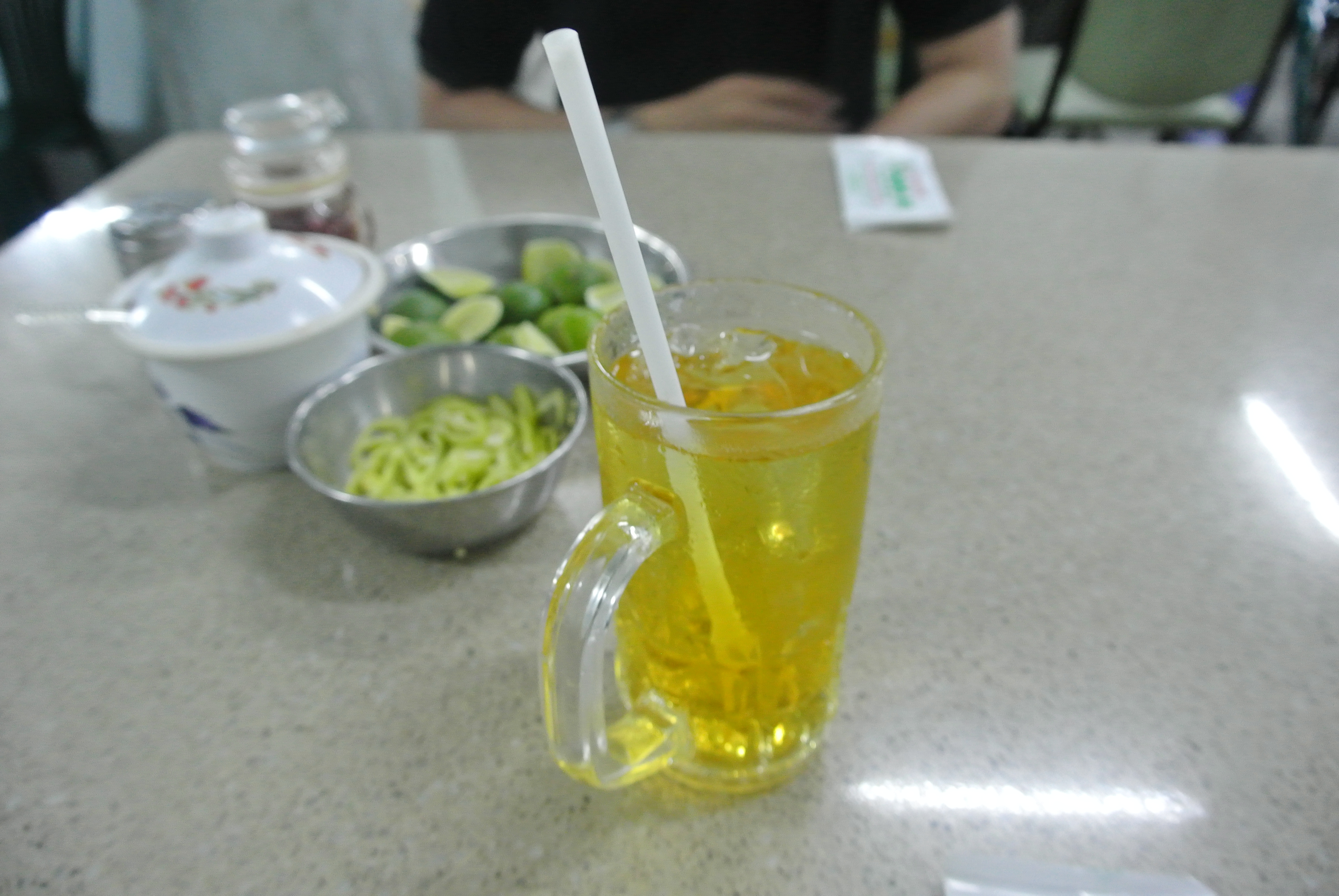 Surprise, surprise. The first meal we had is a bowl of Bun Bo Hue, with the same bowl of special chili sauce. Tai and the other tour manager (I think her name may be Fu because I remember a joke where she says it’s like Kung Fu but I am not sure) explained about the difference of bun and pho. The premise of this tour is to not just eat the usual things you’d come for in Vietnam (pho, spring rolls, banh mi, etc), but eat like the locals do and learn about the city as well. 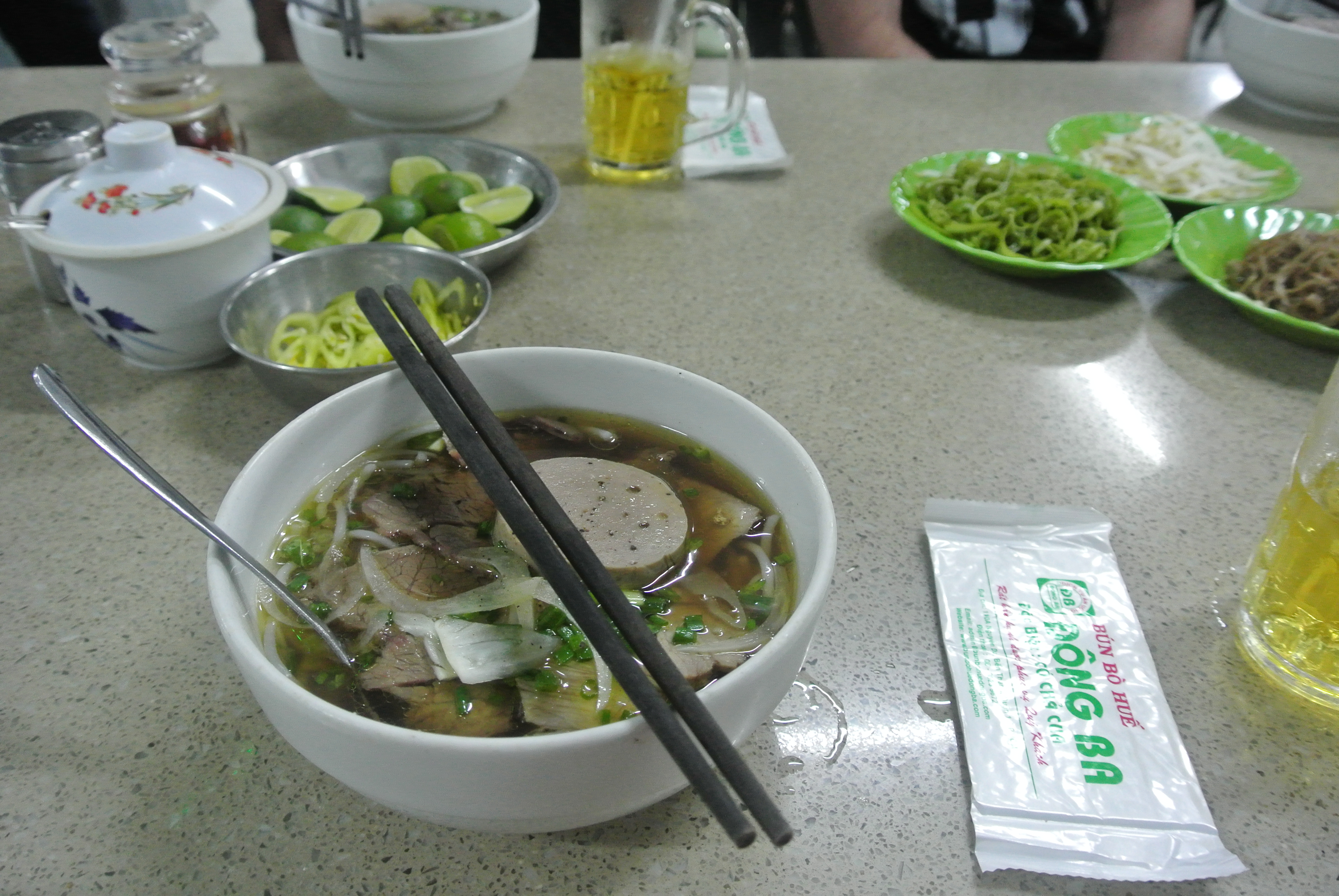 There were 8 of us in this batch, 2 couples and a group of friends and they were a mix of Aussies and Kiwis. One of the men was a skeptic about the power of the chili, and piled on a spoonful on his noodles.. and let’s just say he got a little bit emotional over his noodles. 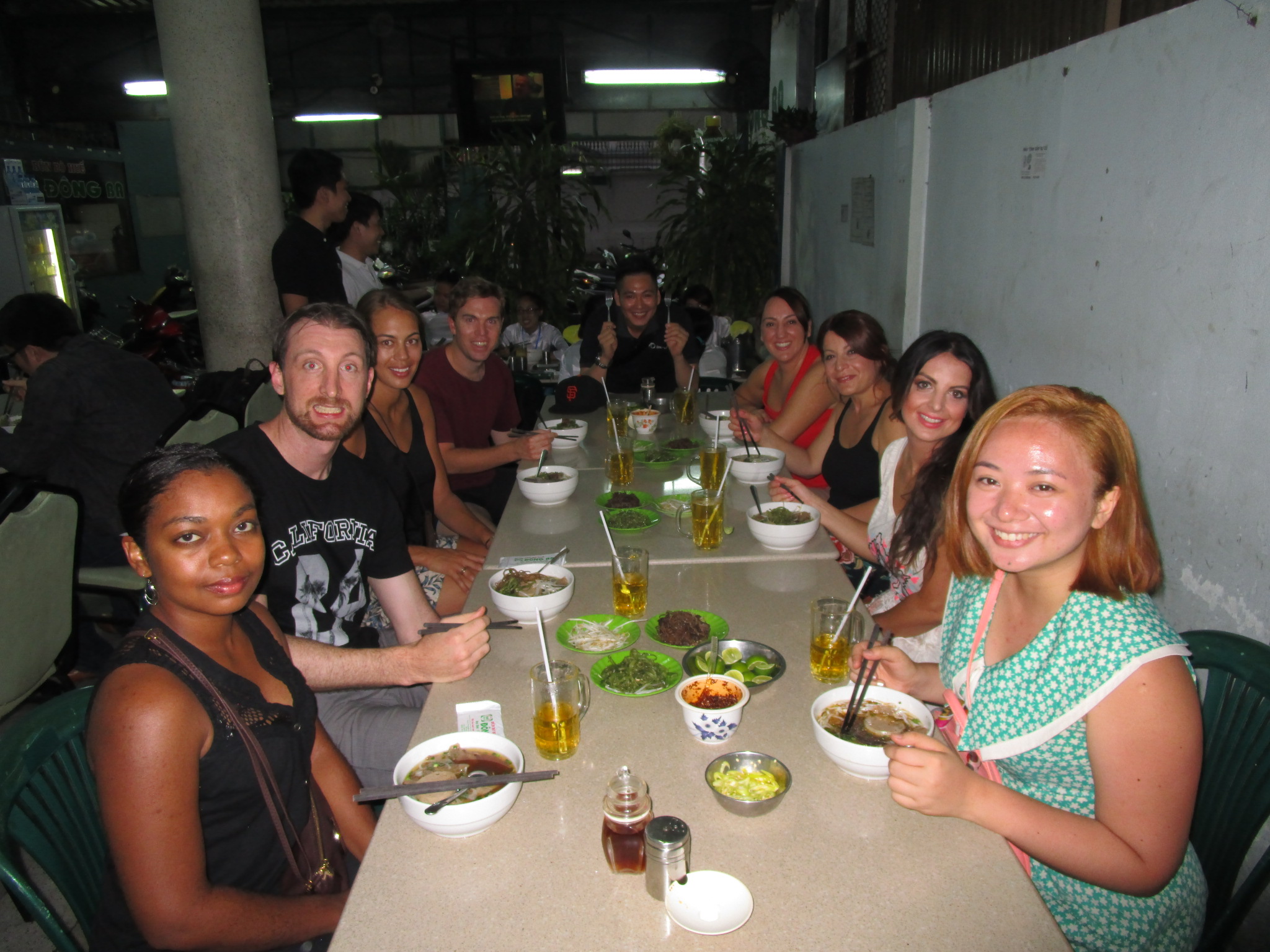 We drove to a few districts and visited some of the sights that tourists who don’t venture outside District 1 rarely go to. Some of these districts are even rumored to be dangerous for tourists and locals alike (I told a Filipino I met in Ho Chi Minh which districts I went to and she proceeded to tell me about unfortunate incidents that occurred there). I felt safe during the tour, probably because aside from the female riders, there were a number of male guys in black XO Tours shirts acting as bodyguards. 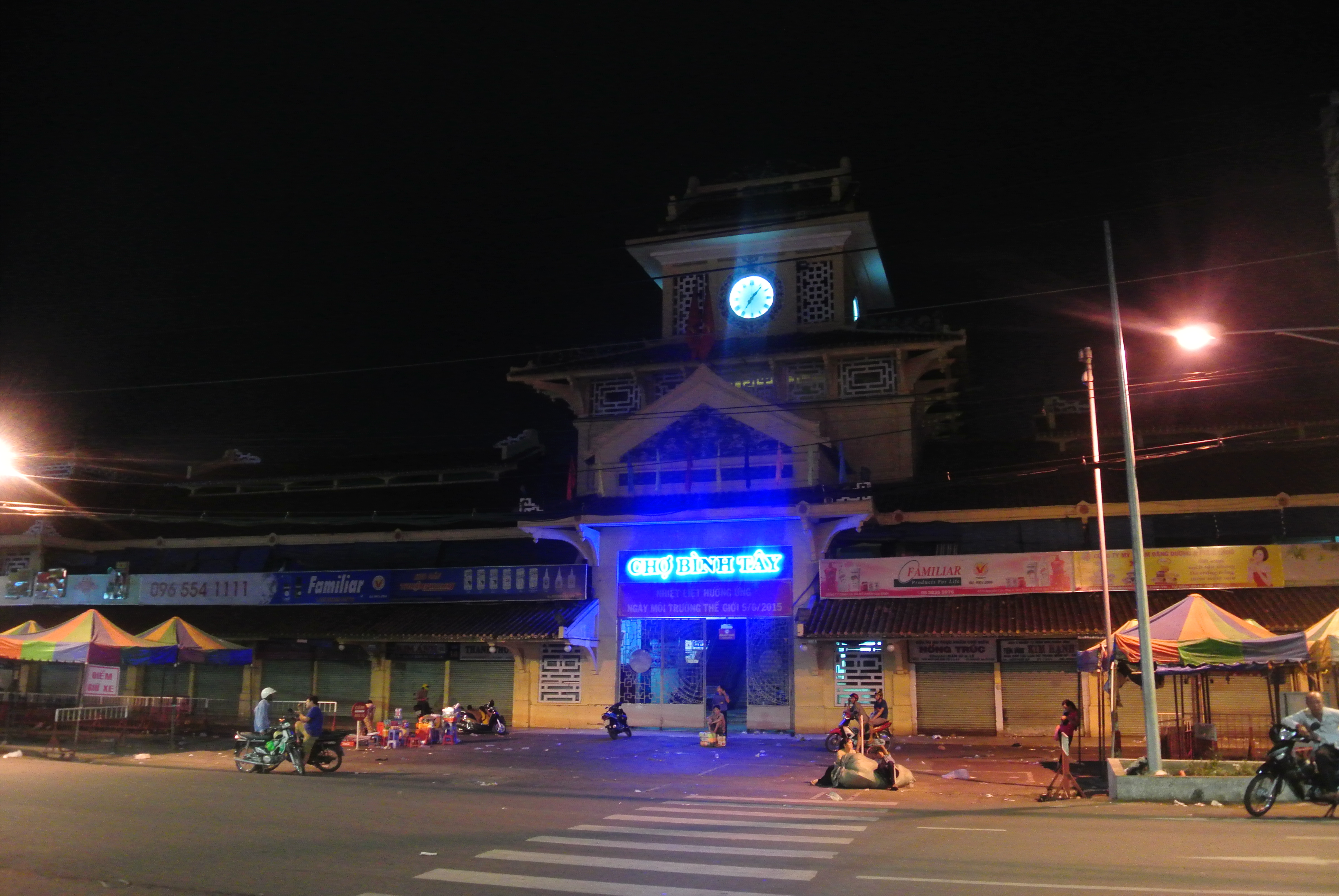 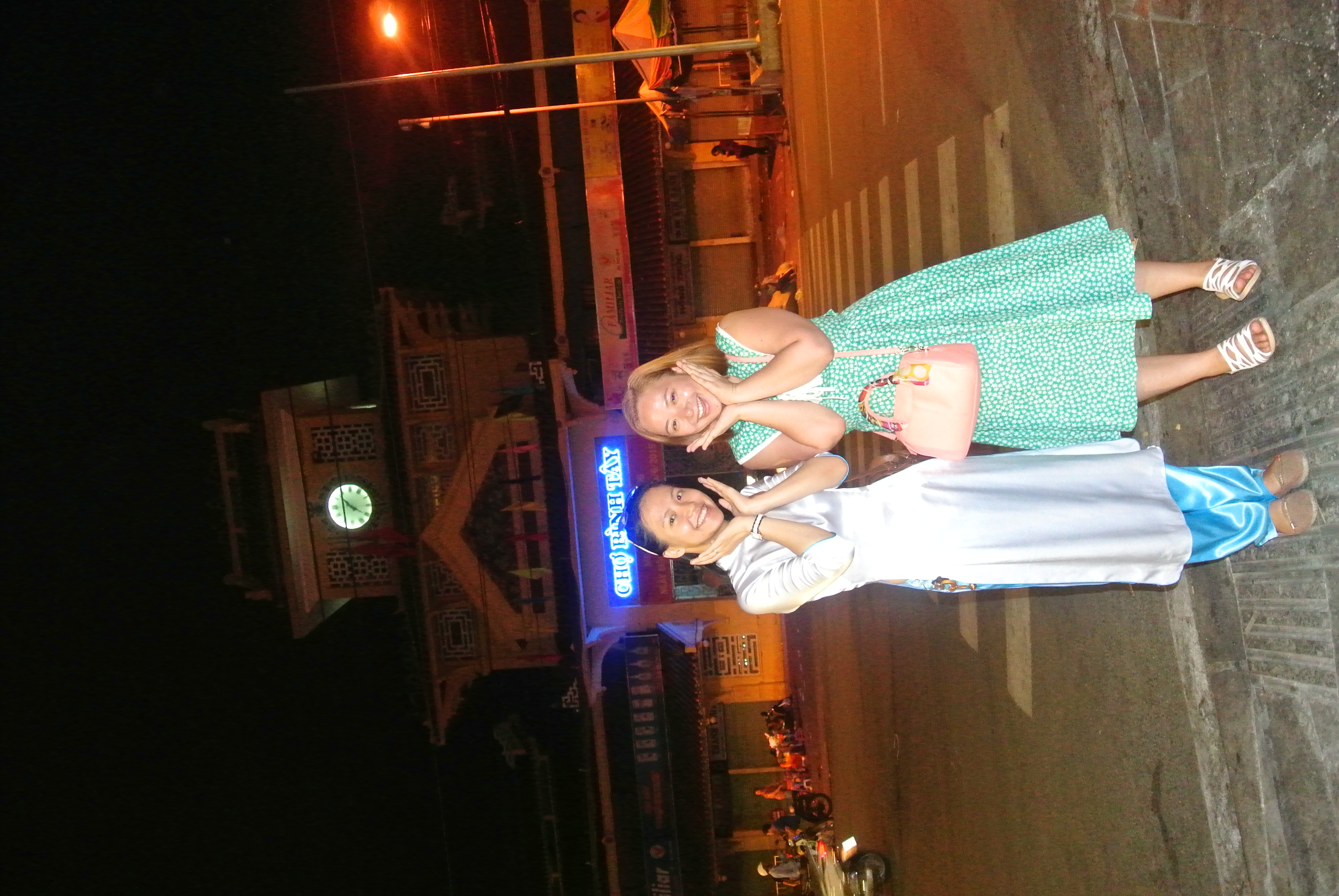 During the ride, Huong and I talked about our goals, what she plans to do next after she retires from XO Tours (the age limit for her job is 28, by the way), what I do for a living and what I actually want to spend my time doing, where to go shopping in Ho Chi Minh (not the Ben Thanh market), and basically, just life in general. 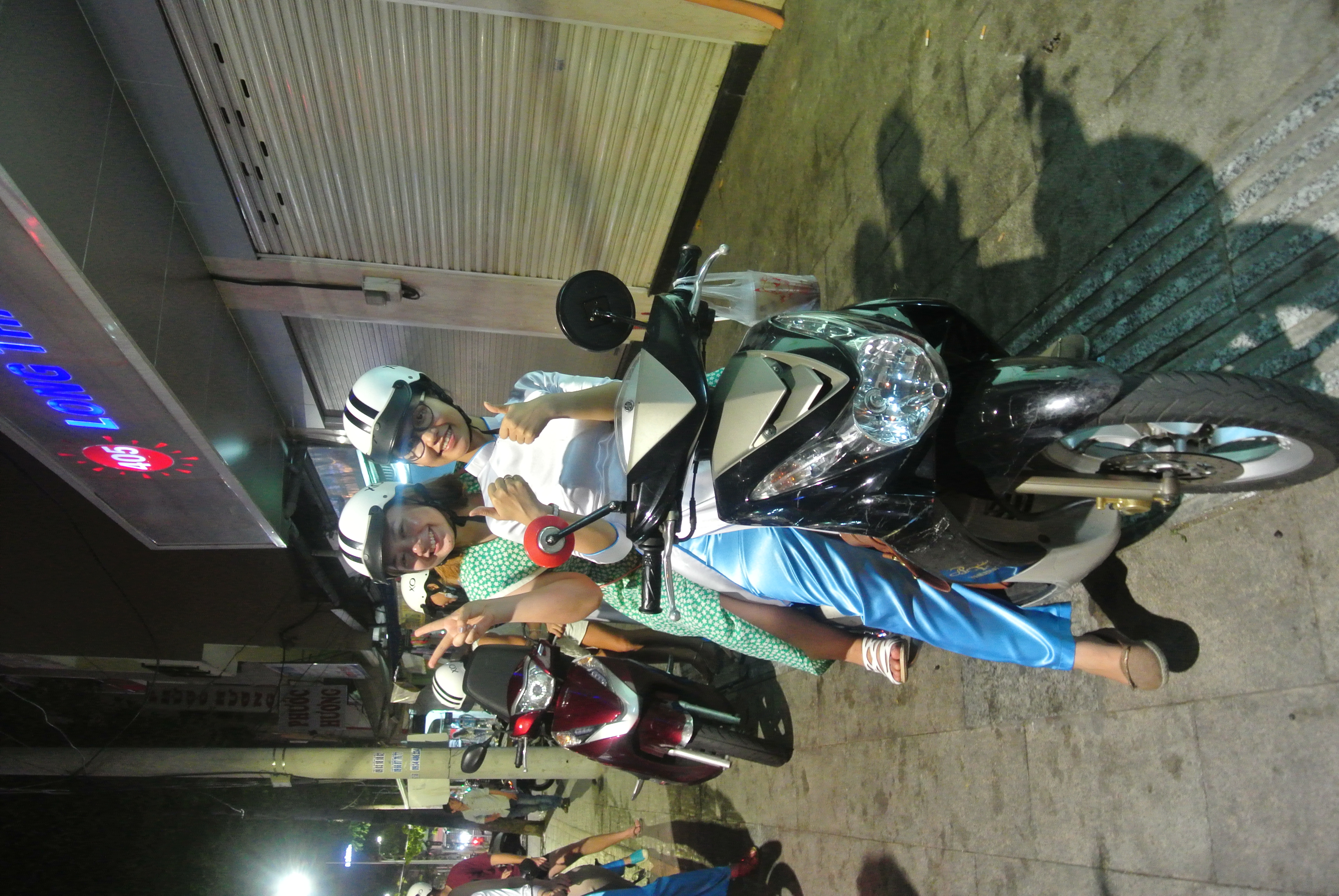 Our next stop is a BBQ type of place. I’m not even going to attempt to explain what goes into the sauce or the mixes for the dip, but essentially, the XO girls you’re with will mix it for you and teach you what to pair with your meat. 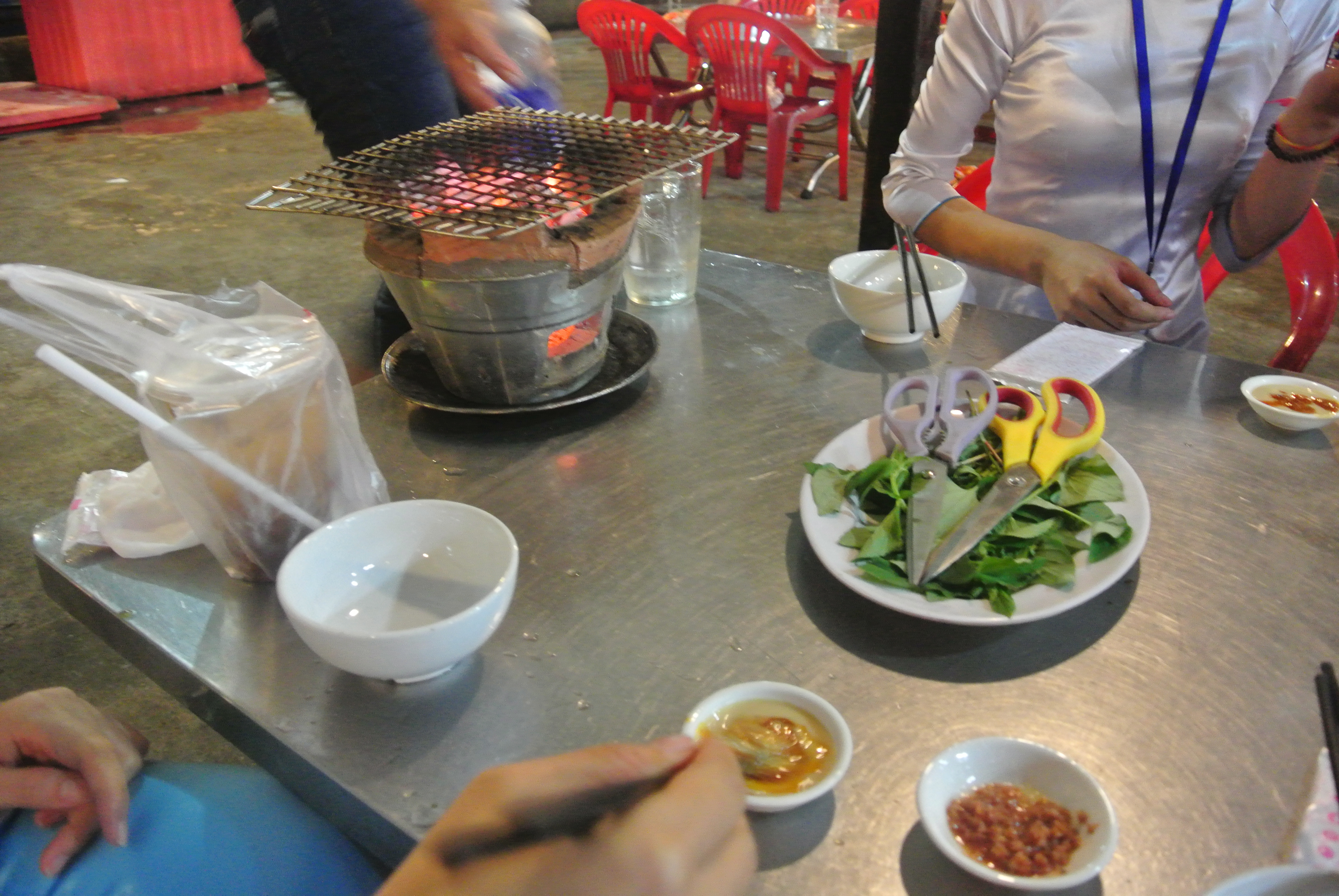 HUONG AND I WON THE CHOPSTICK GAME. /Asian-ed 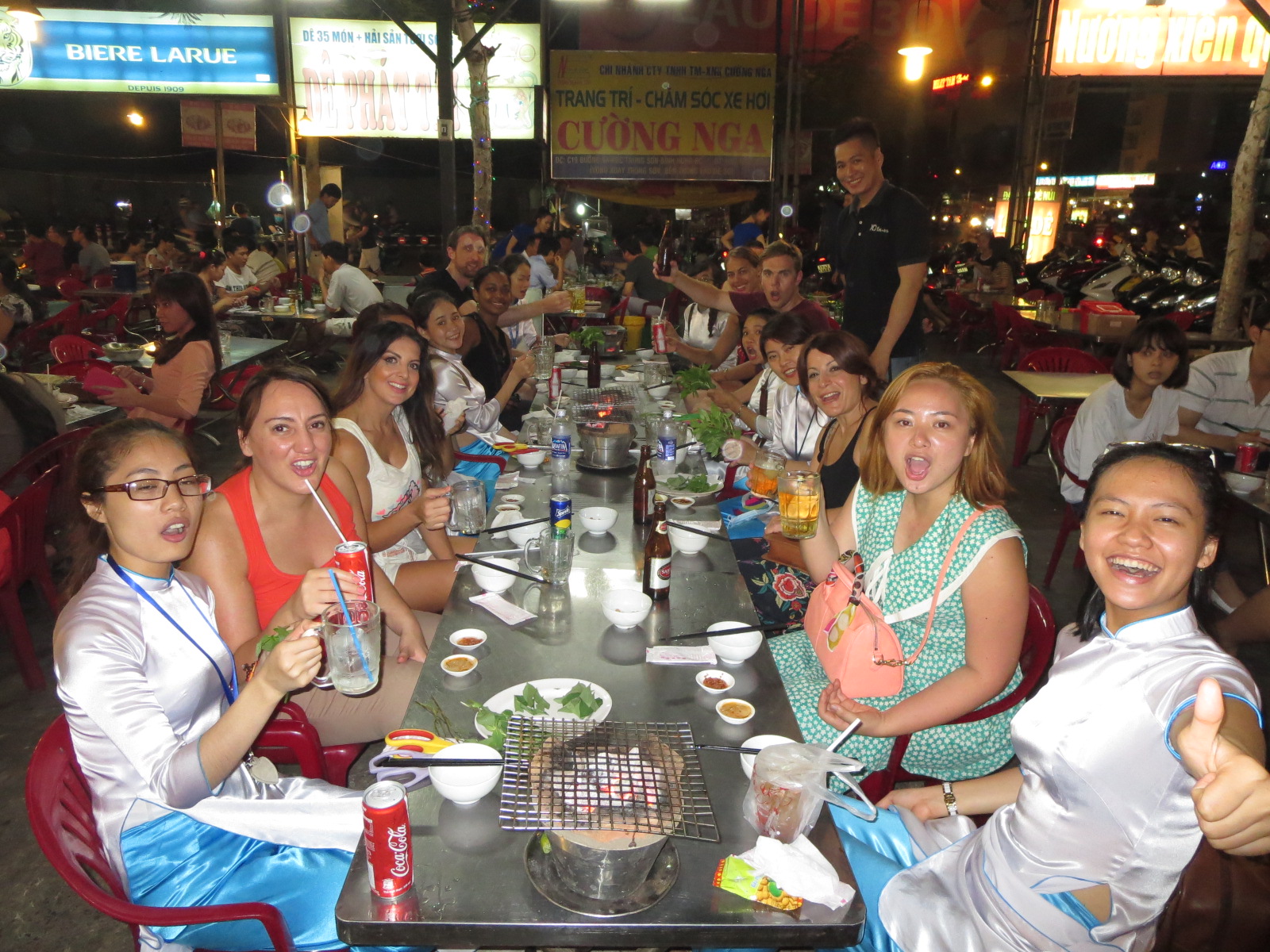 By the way, you can order as much beer (or any drink of your preference) as you want. If you get drunk, they will tie you to their bikes with a rope until you get back to your hotel. 😛 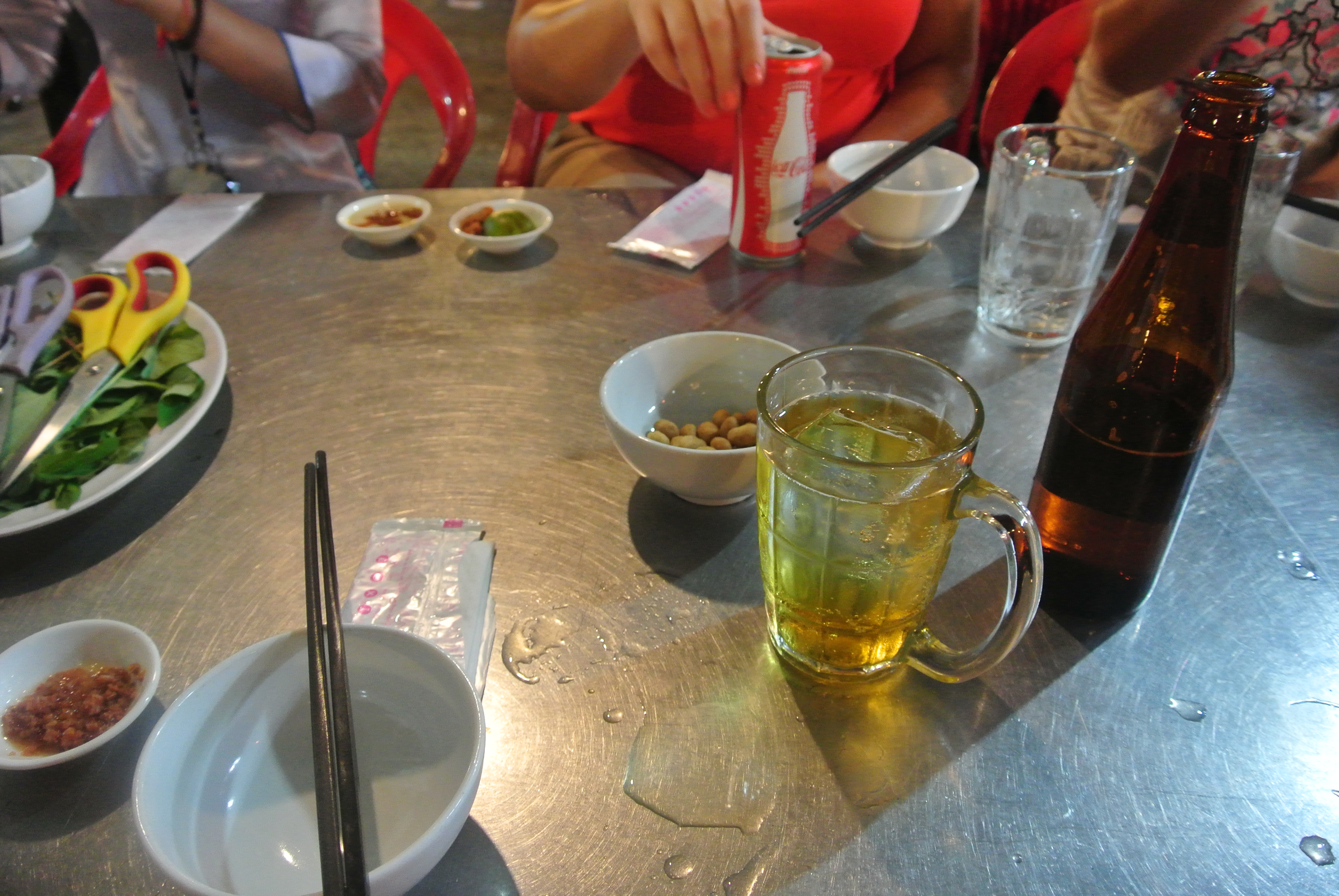 Prawns on a stick – also, the sunburn I got from Hue is very much visible in flash photos. Eek! 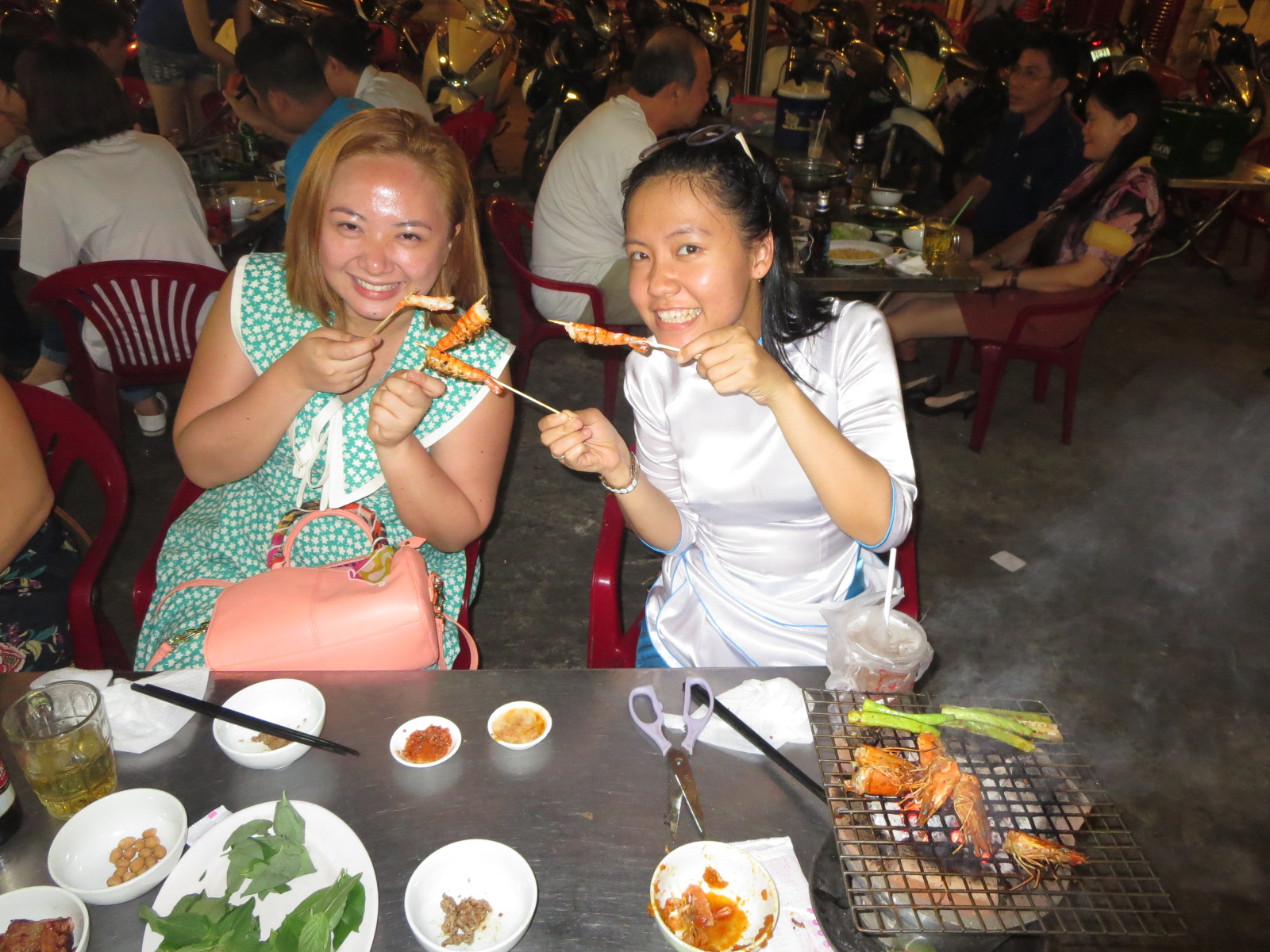 Goat meat and okra slathered with sauce before grilling. I am not a huge fan of okra but this was so yummy! There were three kinds of leaves you can wrap the meat with, and of course, I tried everything. 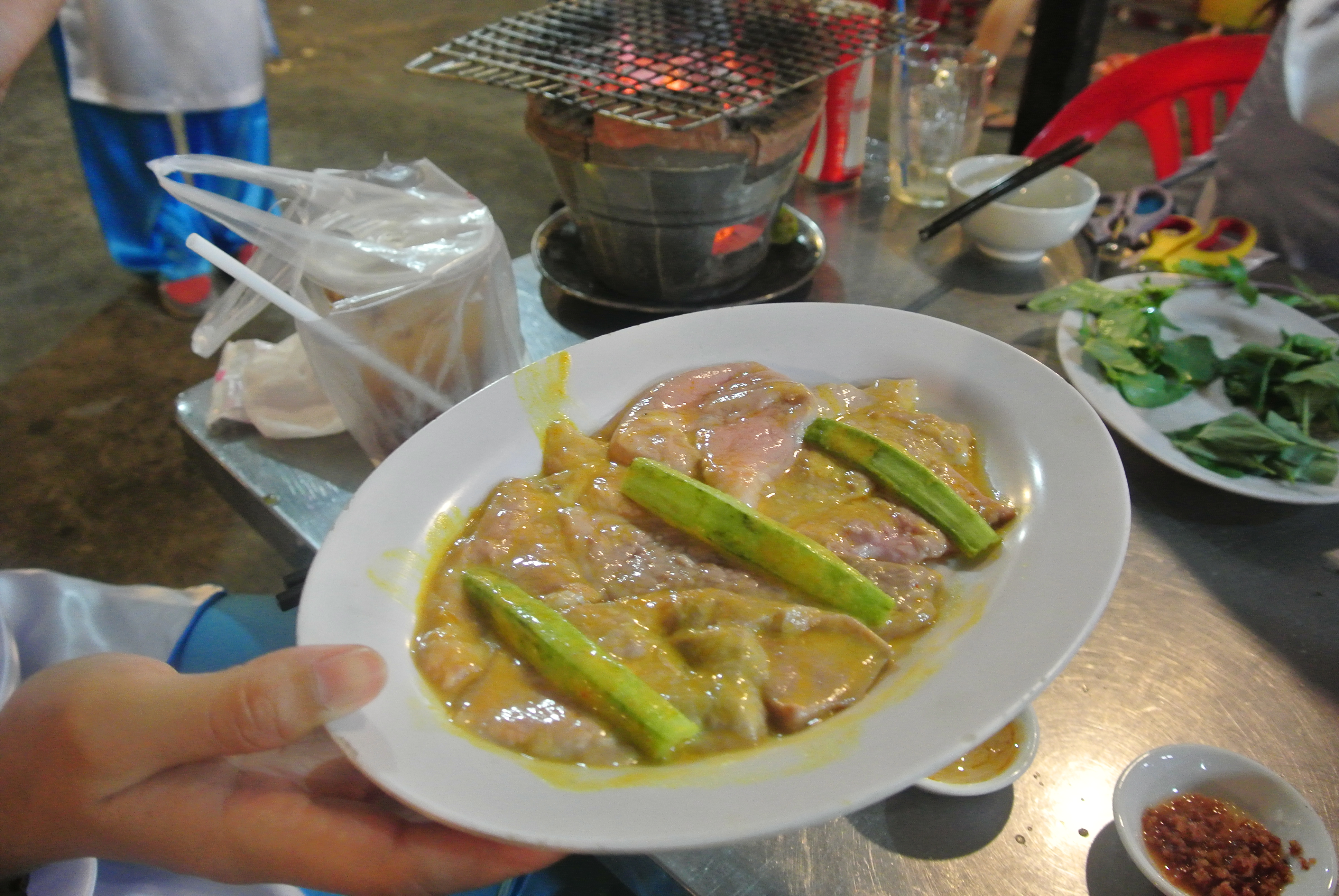 There was beef as well, but I enjoyed goat meat more. There are some Filipino delicacies that use goat meat as well, so I wasn’t as bothered by it as the Aussie/Kiwi woman I was seating next to (she took care of a goat when she was a kid, treated it like a pet, ended up with goat meat for dinner which is honestly traumatizing for a kid). 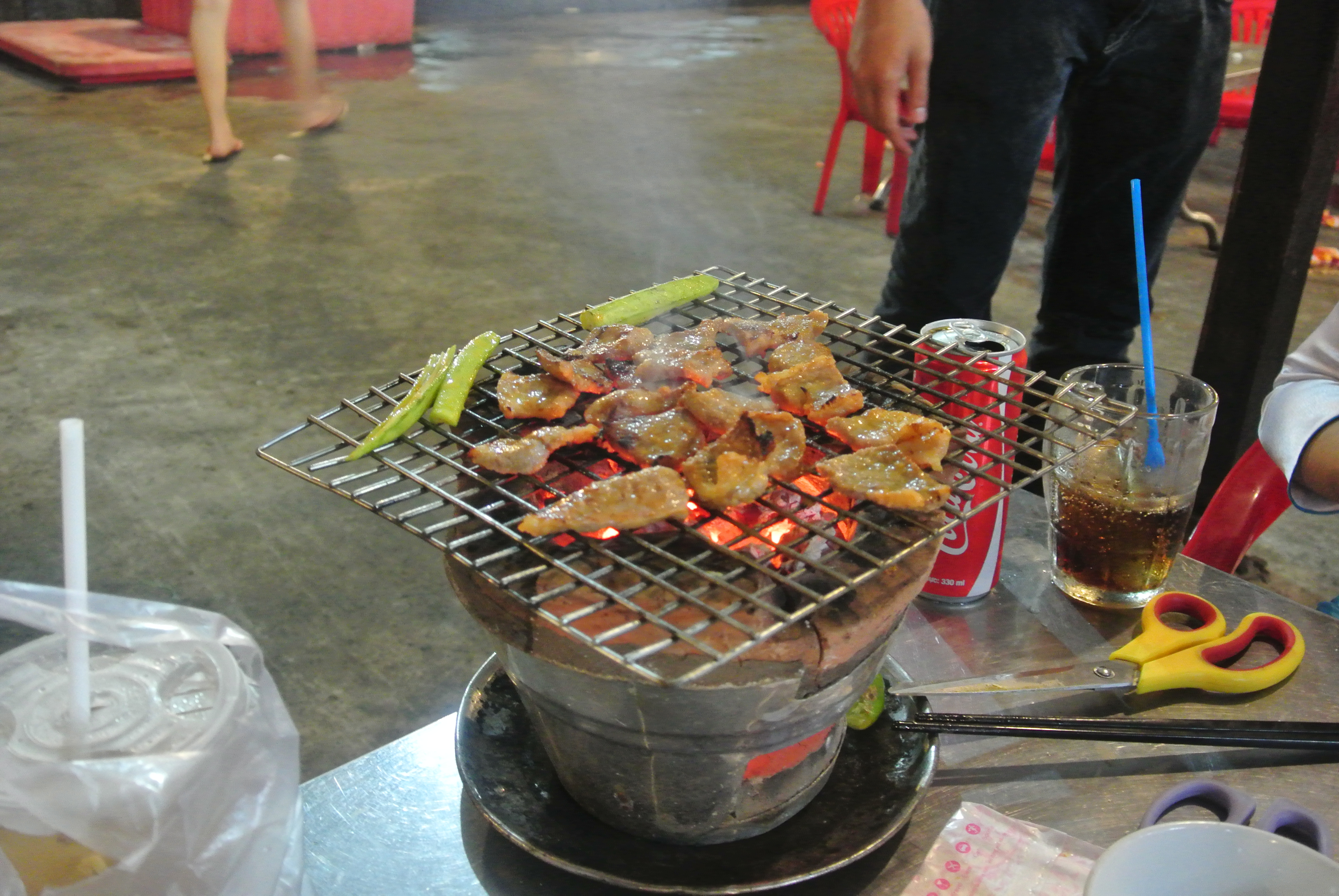 I ate frog meat for the first time as well! I can now tell everyone who swears that it taste just like chicken that they are liars!!! It does not taste like chicken.. but if you eat the meat with its’ grilled skin, it tastes similar to grilled fish. 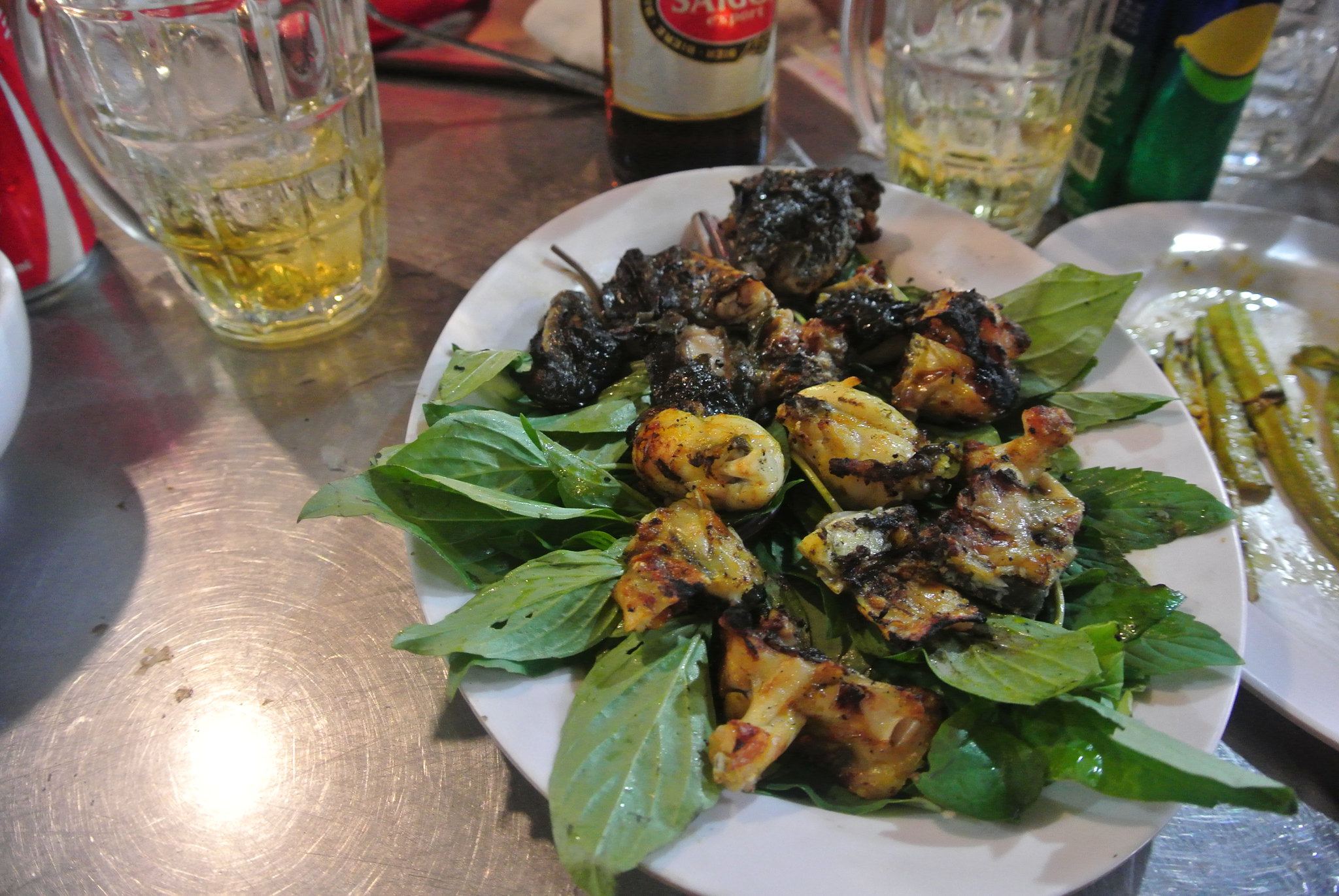 Probably what made me fall in love with Vietnam.. fruit with salt! 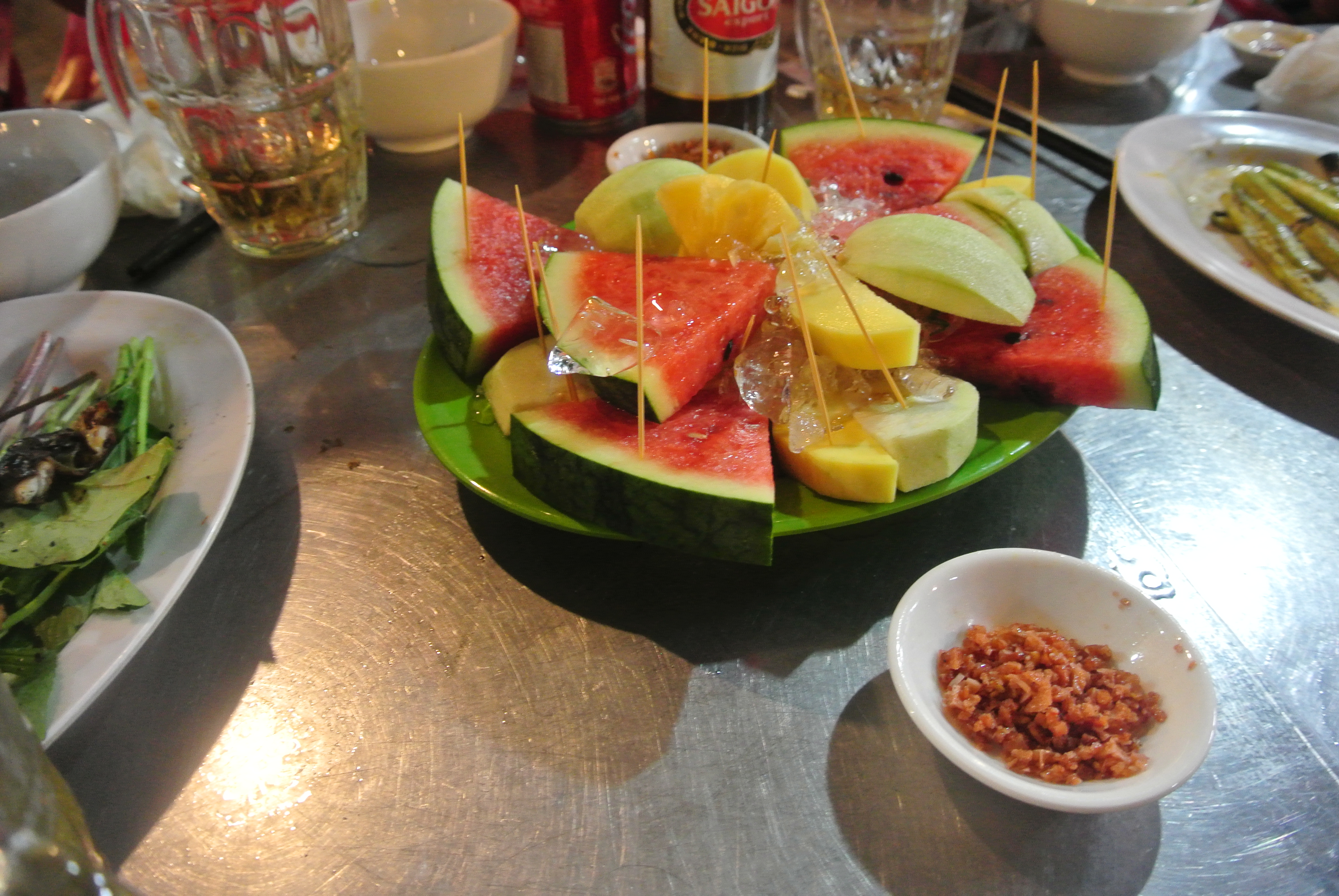 What I liked best about this tour is that I got lucky and was assigned the fastest driver that night (we were always the first ones, after the tour managers that is, to arrive no matter how late we leave the location), and that Huong liked to point out interesting places while driving – such as the local MOMOL place which was in the bushes near a gas station, the basket full of live frogs and cow’s testicles in the market, and a lot of other things. It really was an experience. 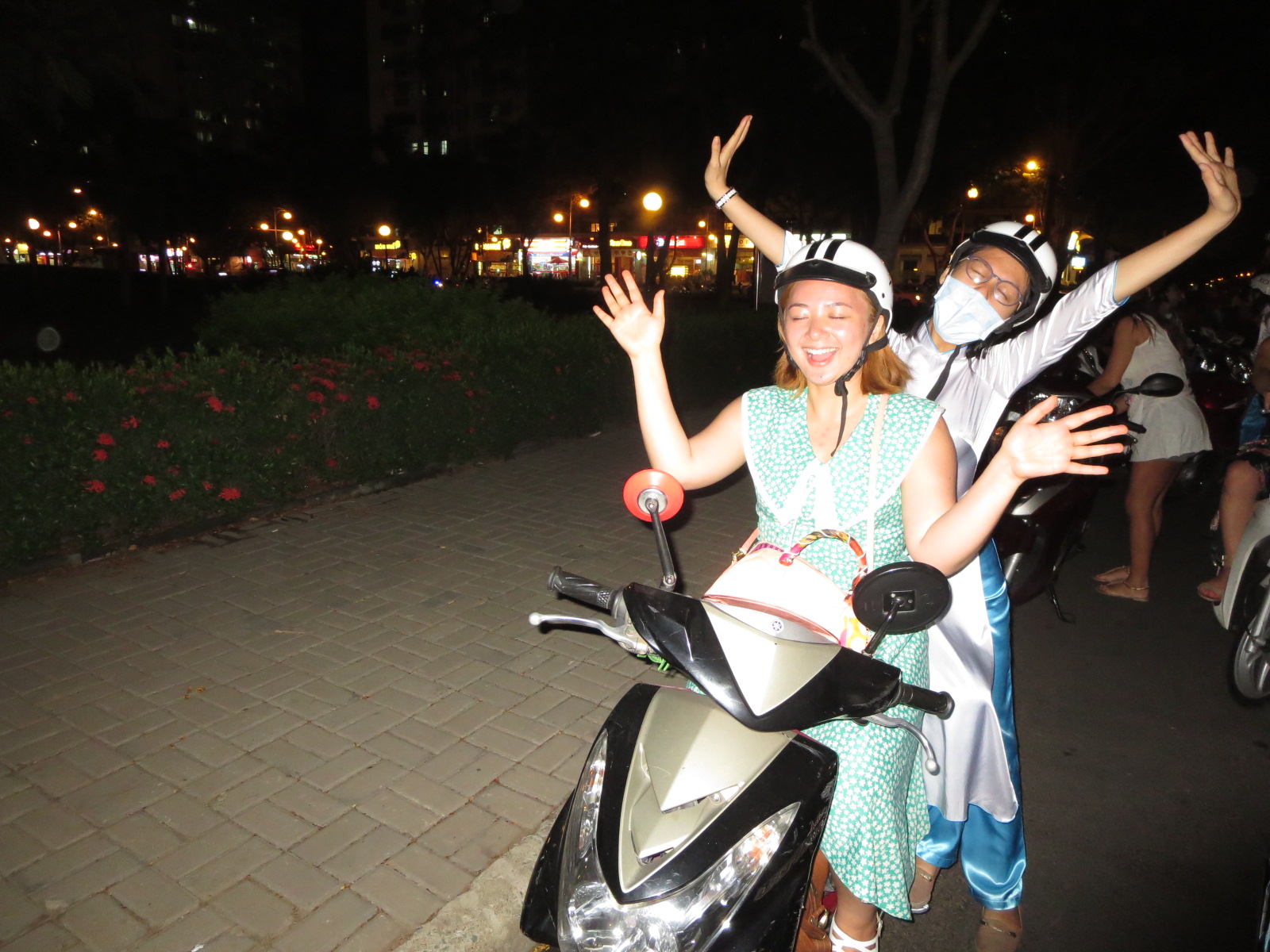 I swear, there are so many salt dip combinations in Vietnam. It’s crazy! I love each one! 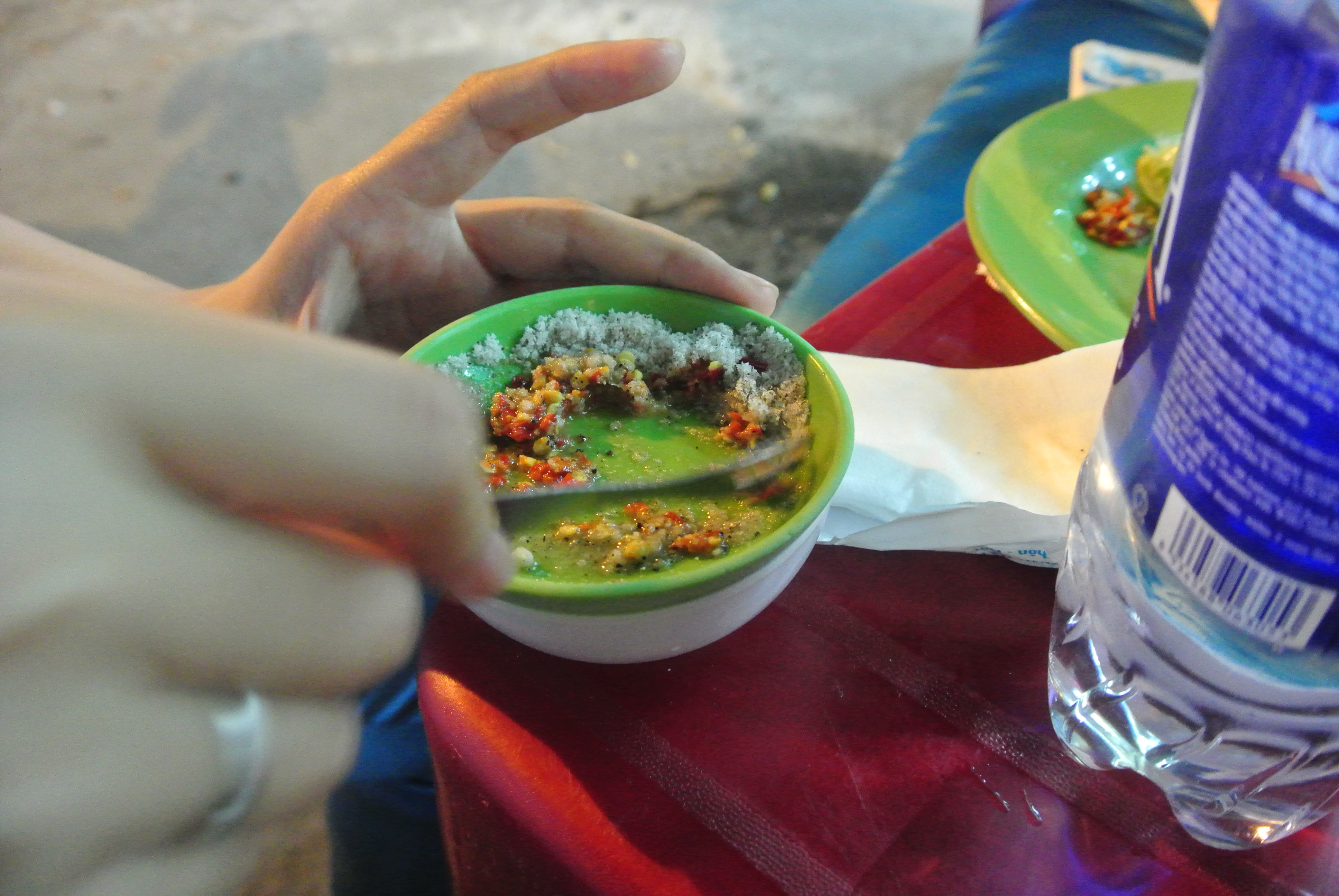 You can actually order more food if you’d like. They have an eat all you can until you are full policy, and I did eat as much as I can. I think we also ate a duck? 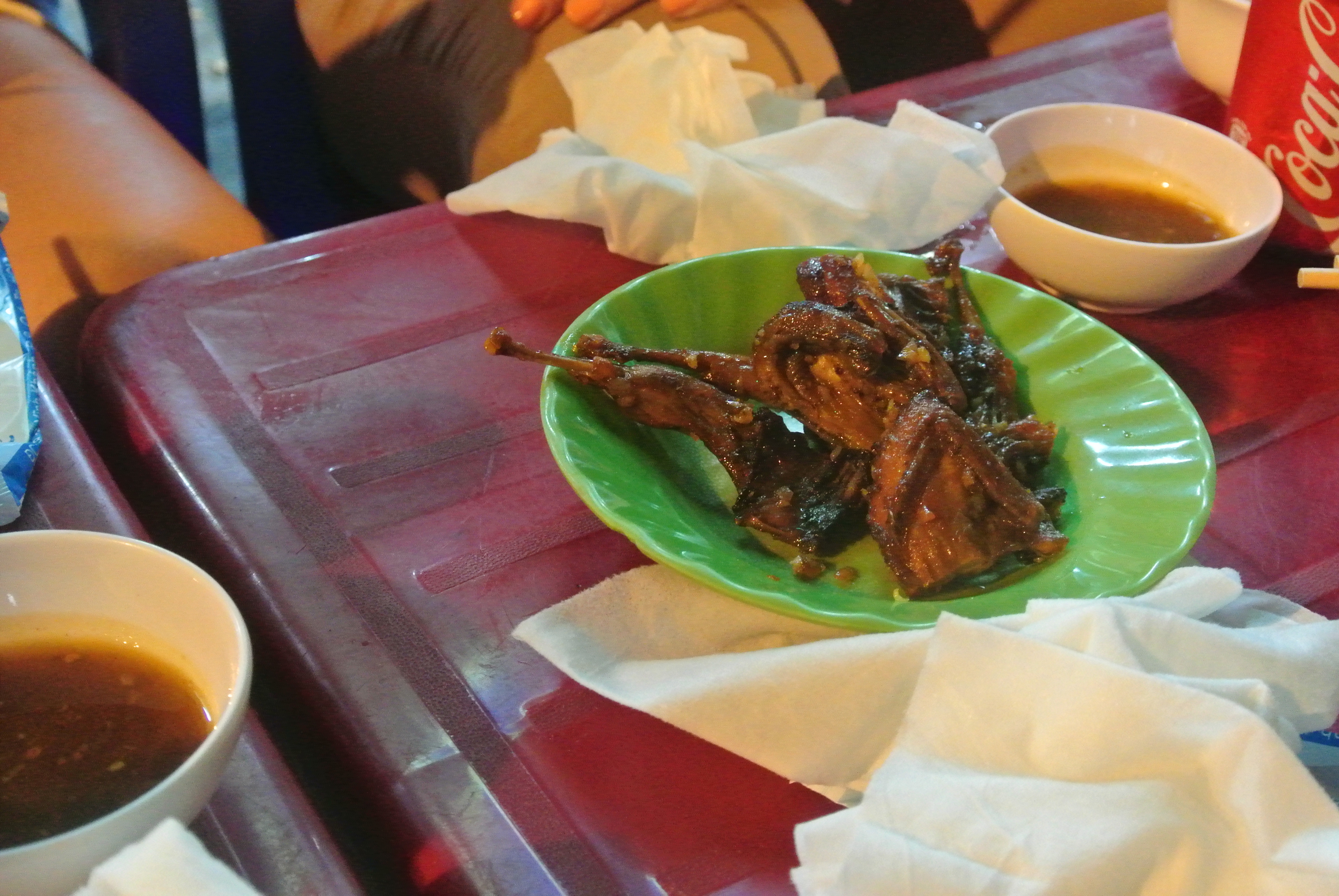 Seafood galore! We had crabs (they take out the meat for you.. it’s awkward and awesome at the same time) and clams. 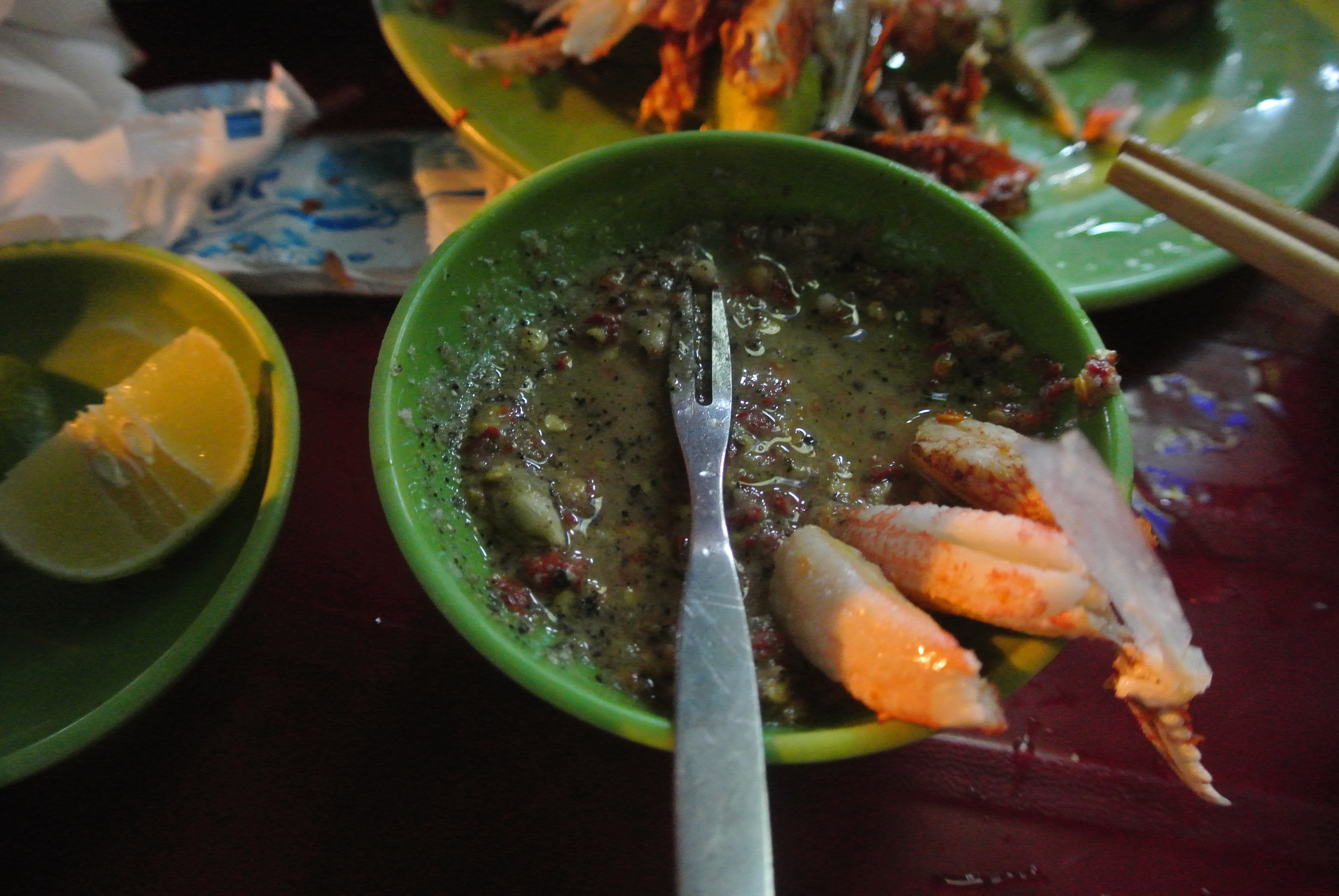 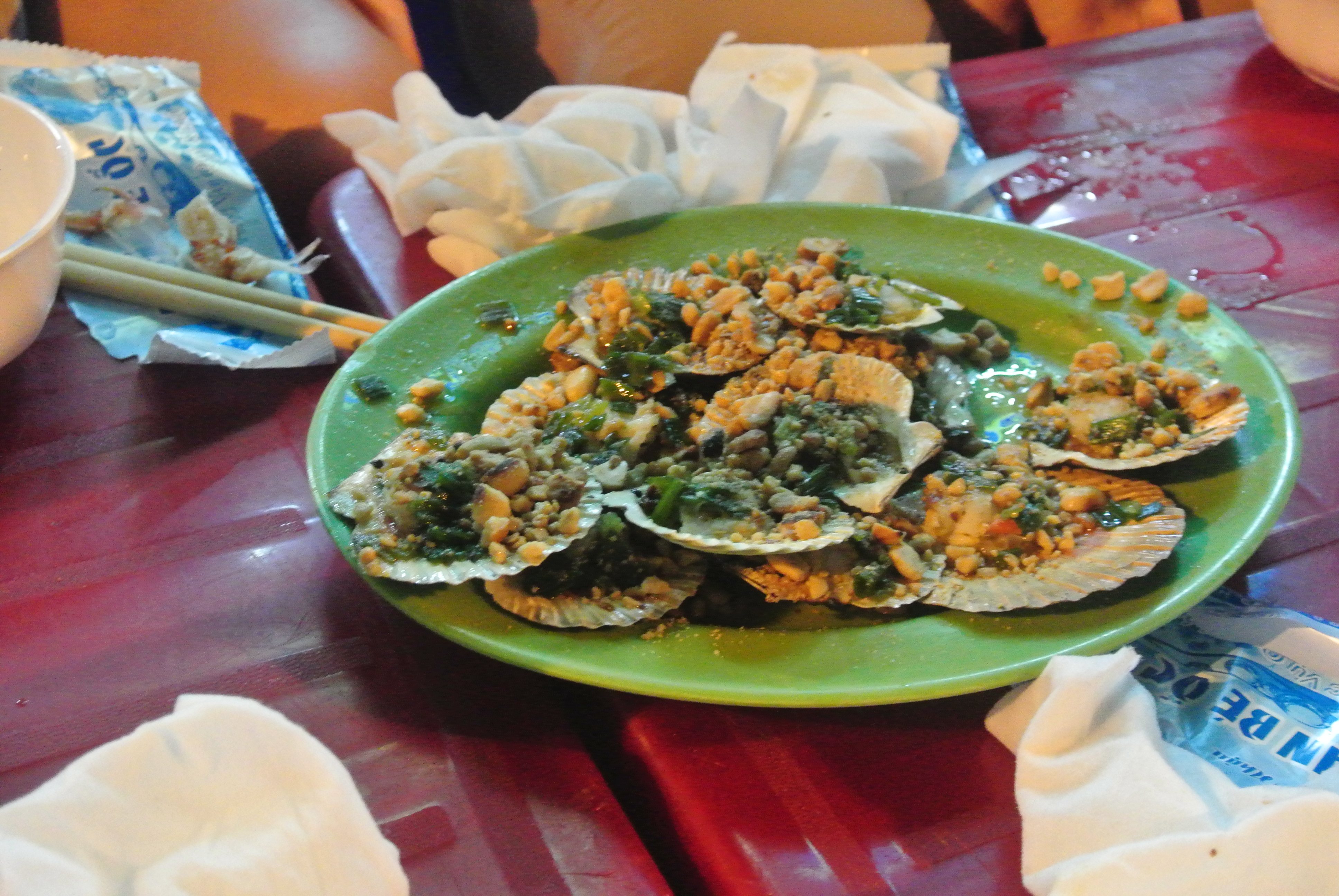 I still drool over the memory of this dish. Everyone should try this! The content of this plate was gone in a flash. 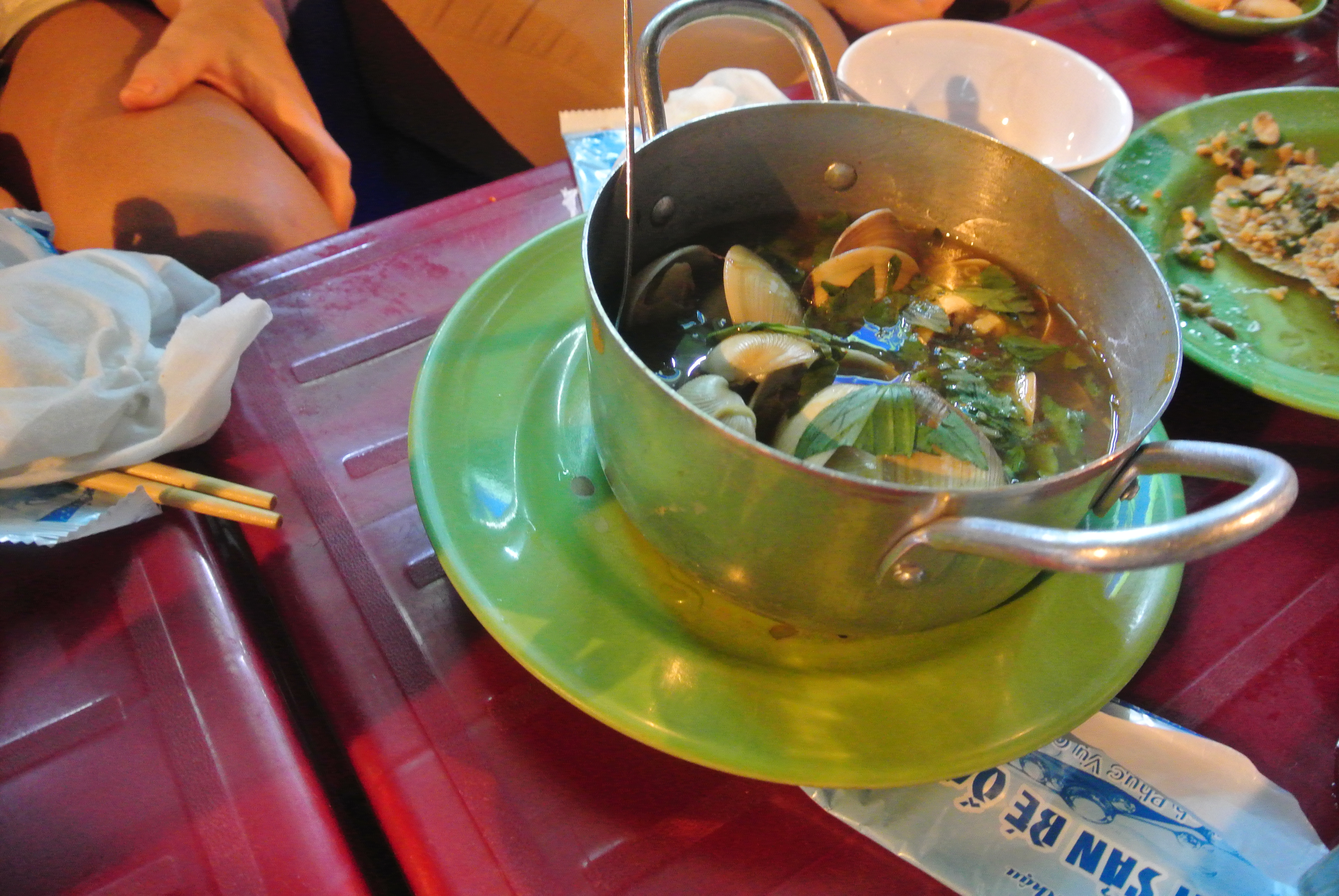 The Vietnamese had their own version of balut (trứng vịt lộn or hột vịt lộn), and because it’s known for Pinoys to eat this, Huong and I shared one (much to the disgust of my seat mate haha). 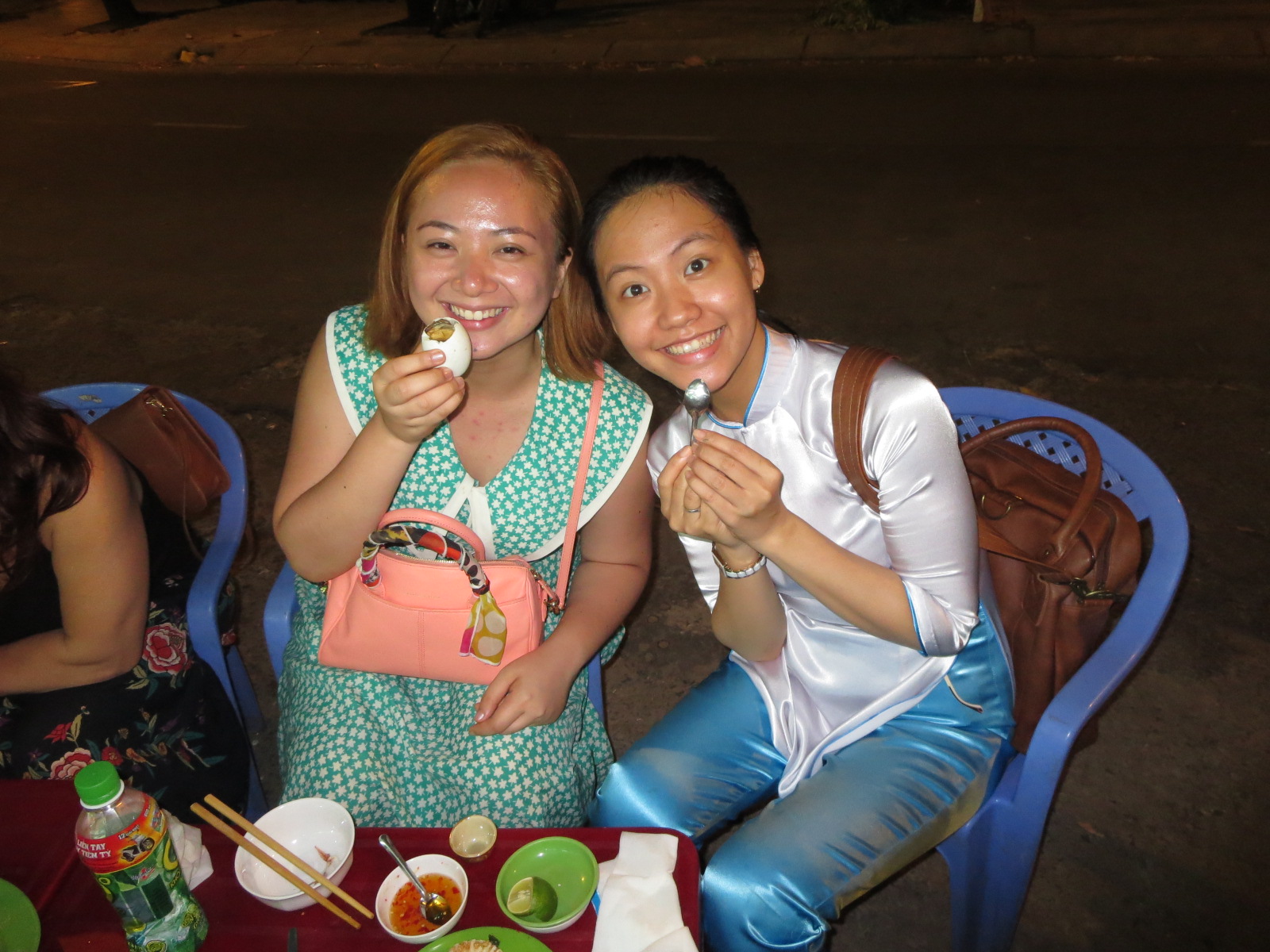 Huong got me a few bottles of juice that I can take back to the apartment. As well as a ton of Drive Vietnam discount coupons that I happily gave away to all the other tourists I met in Ho Chi Minh so they can use it since I have pretty much booked tours for the rest of the days that I was in the city. 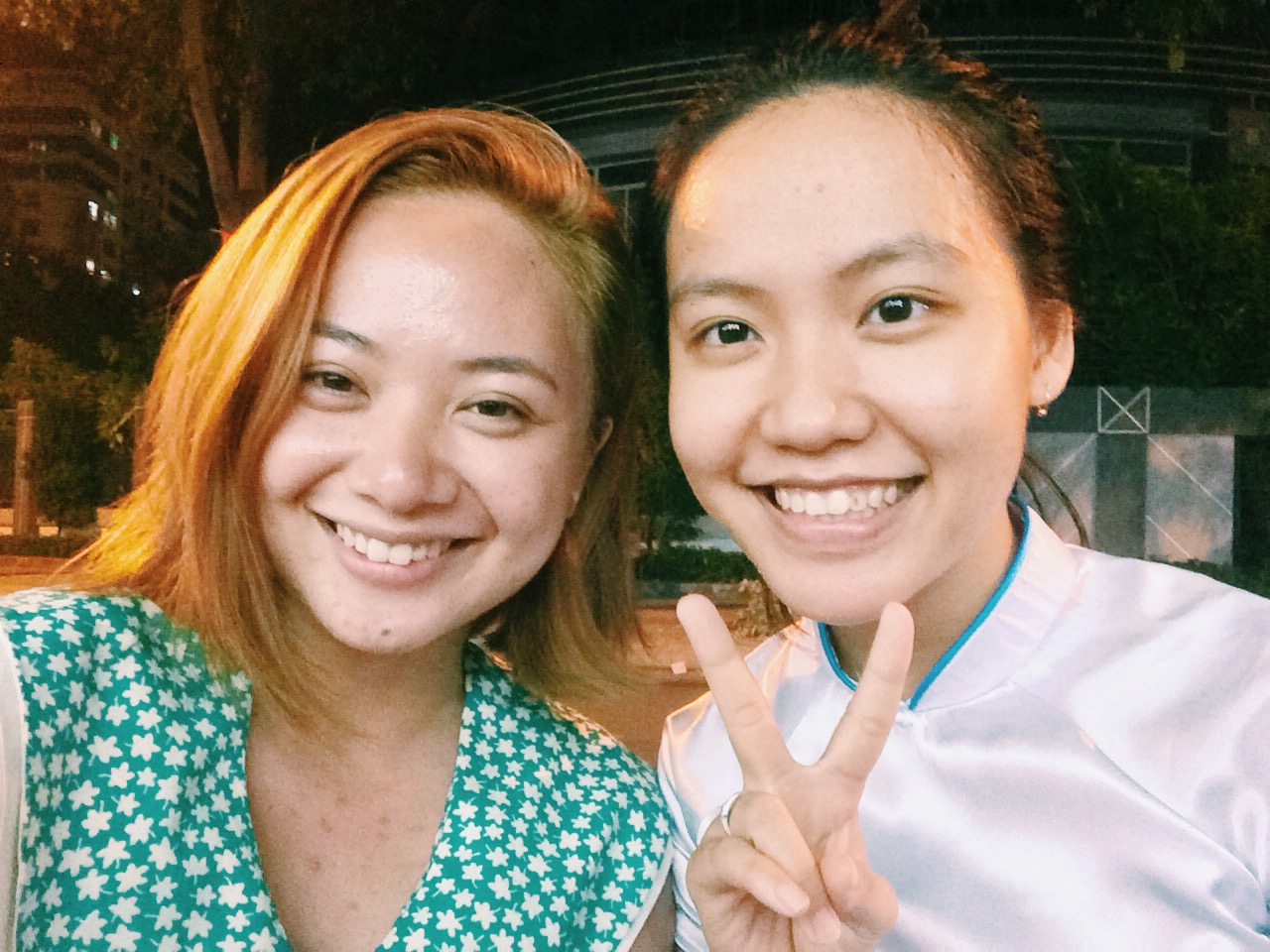 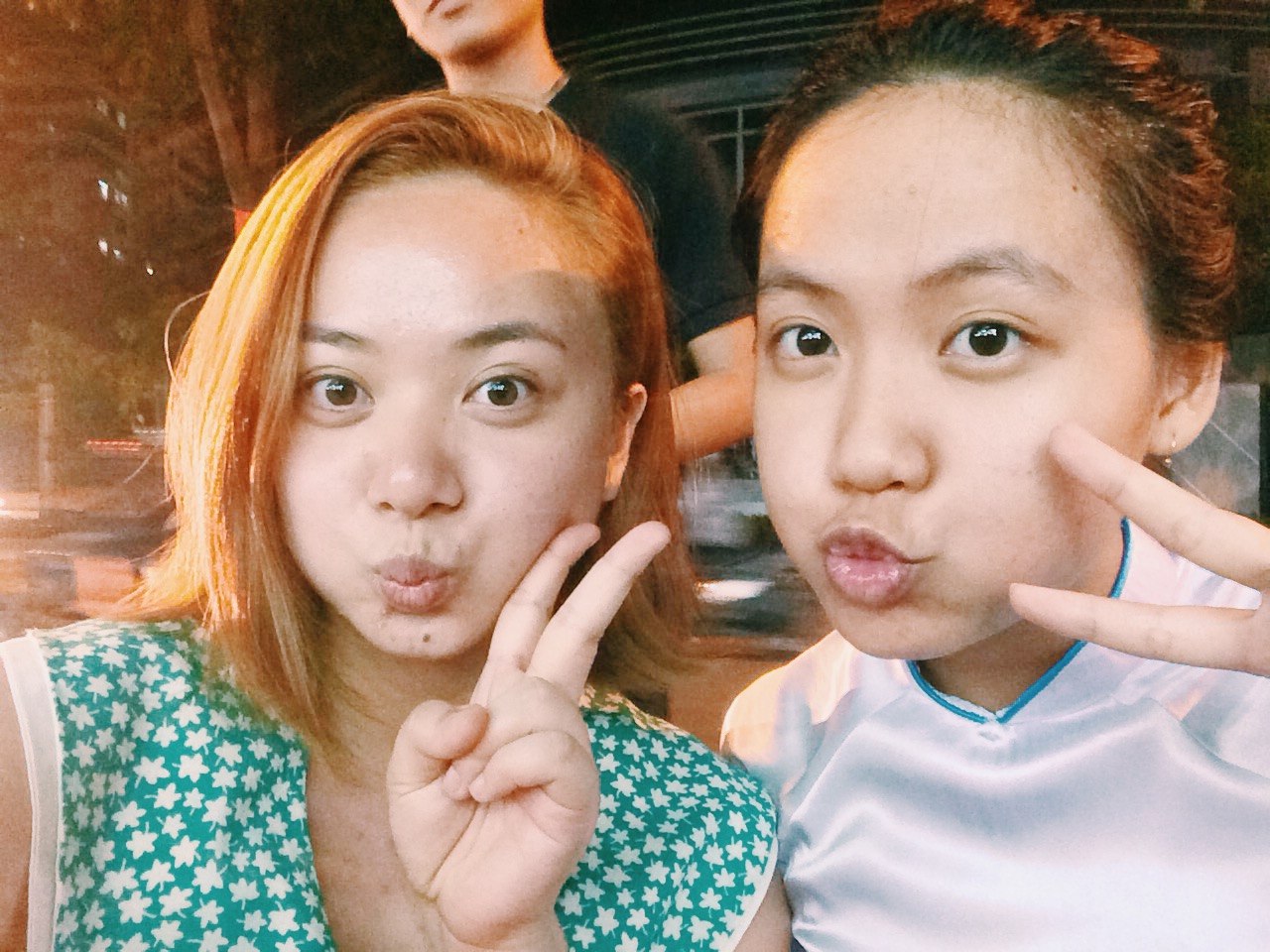 Tai cracked some buko (it’s a Filipino term for young coconut), but instead of juice, it was filled with coconut flavored jelly for dessert. 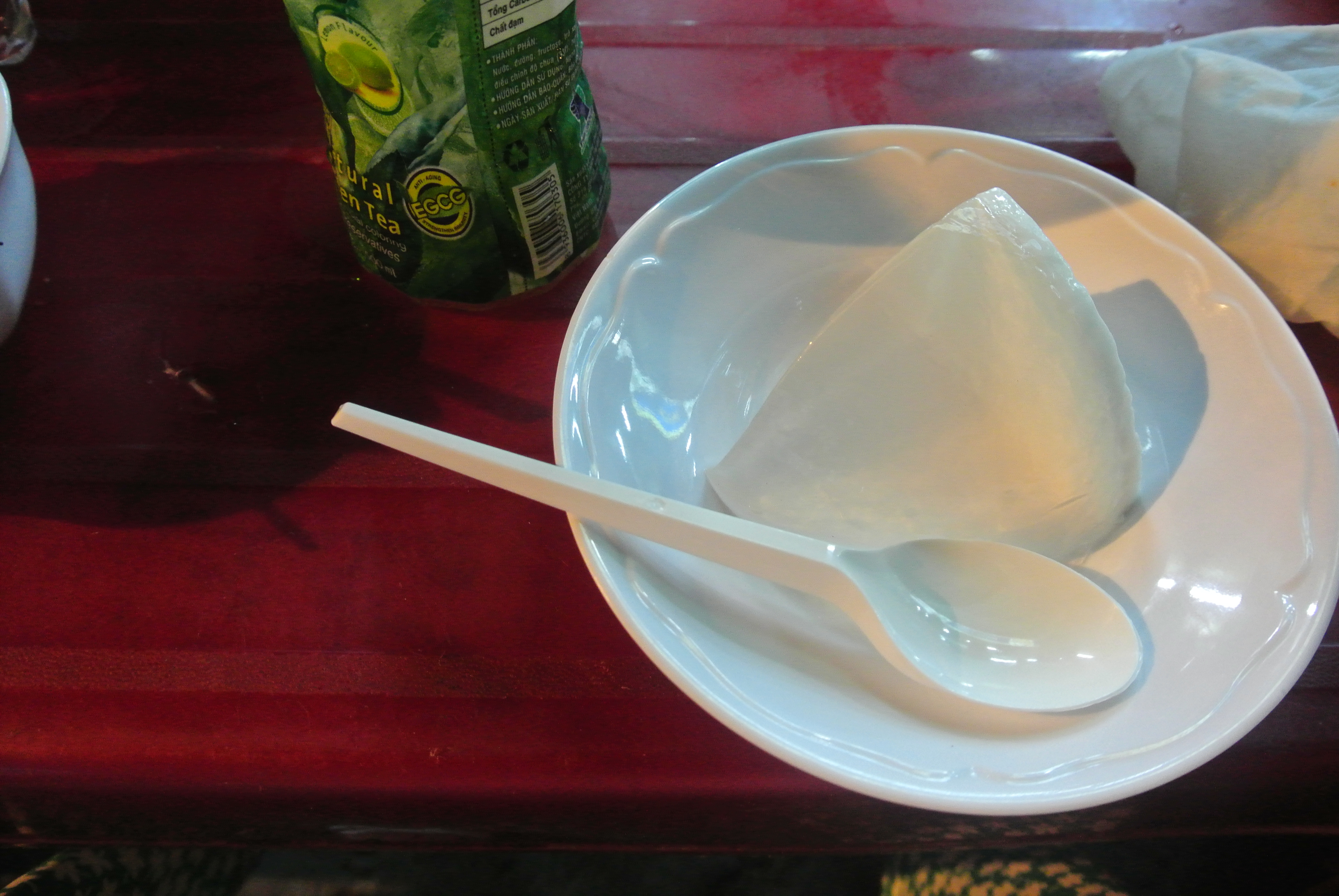 And here’s some custard with caramel and sago pearls (think leche flan with sago pearls). 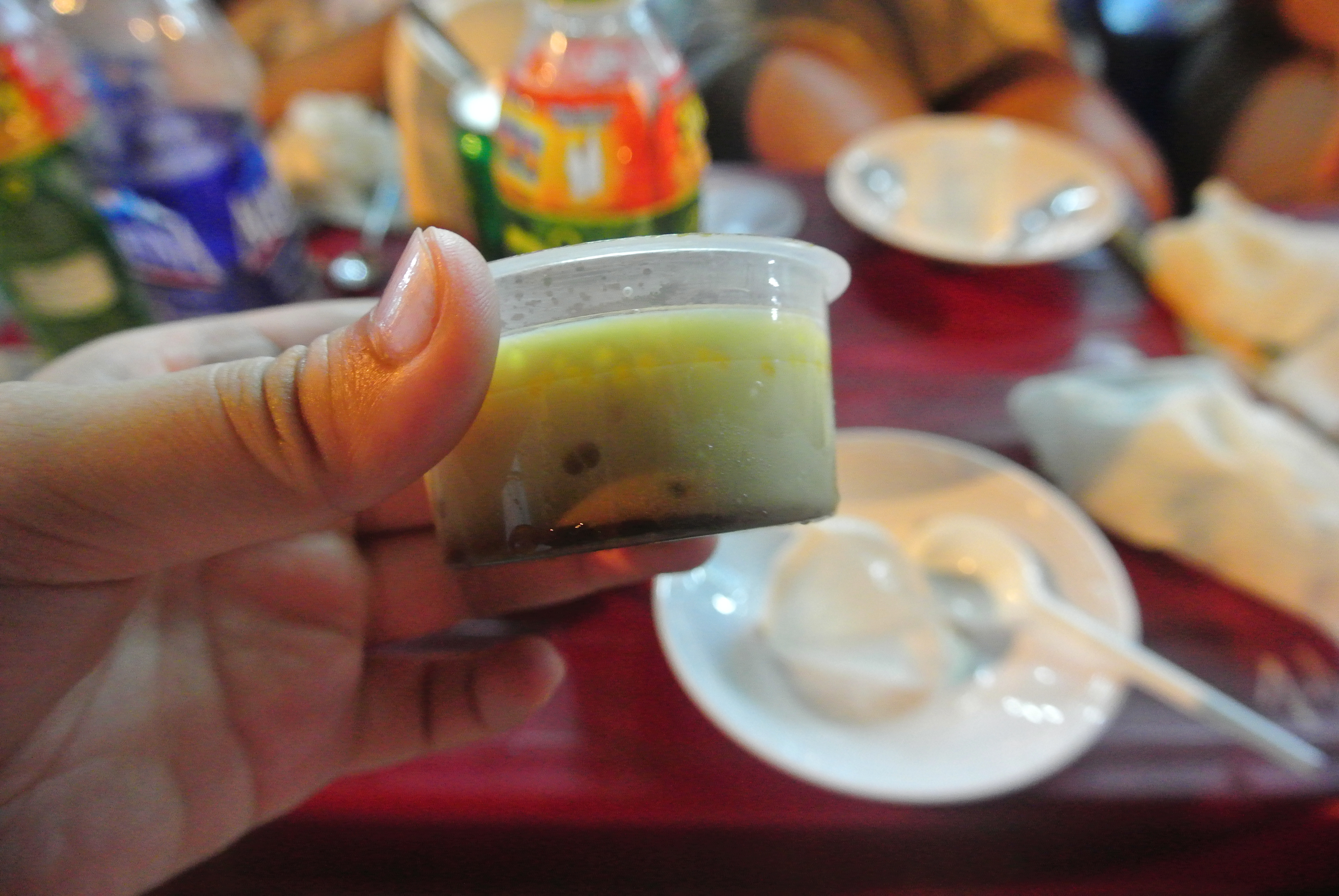 I got back at the apartment a few minutes before 11 PM. I’m super lucky that all the tours I booked for this trip are very memorable and fun. 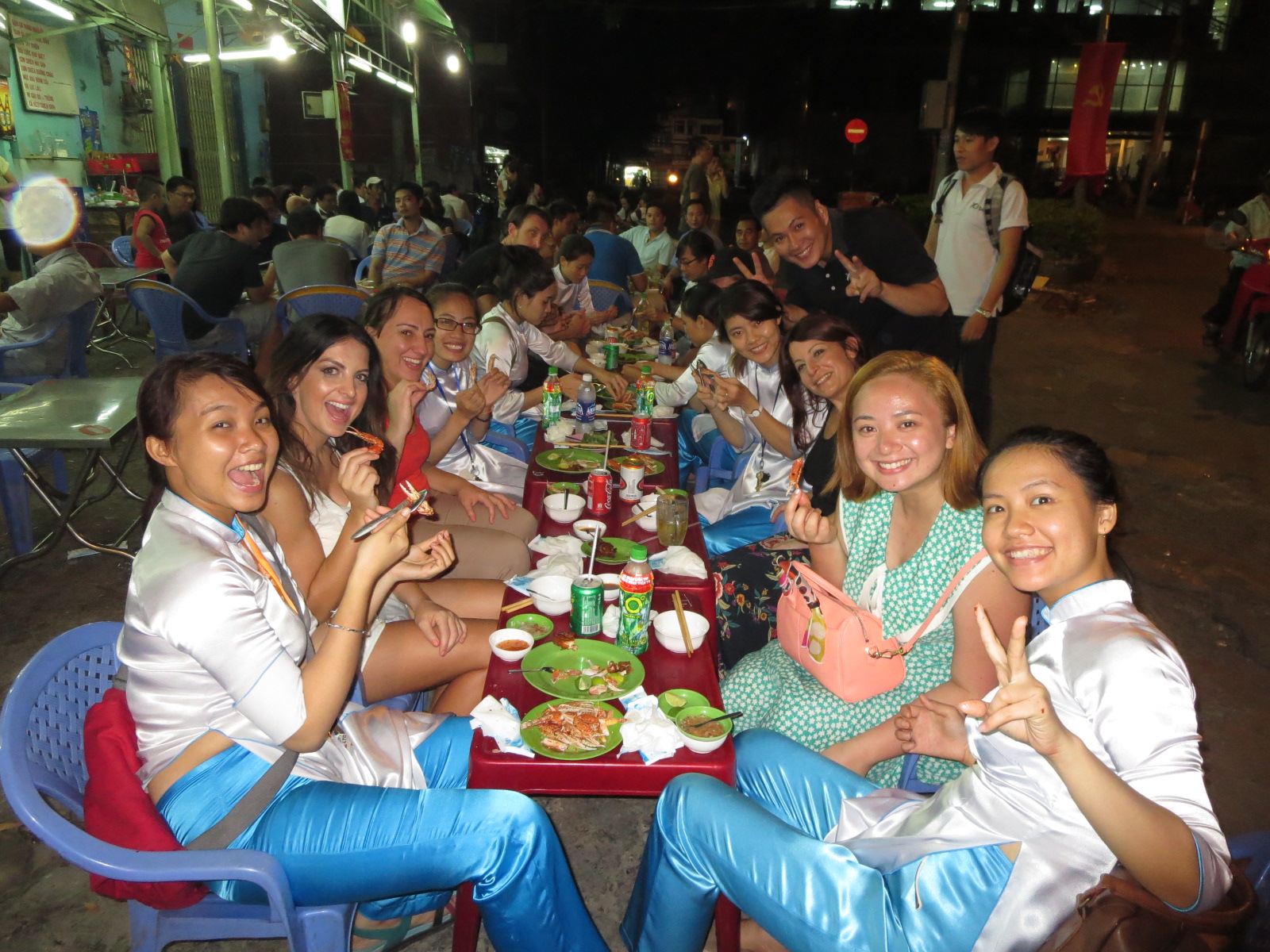 I highly recommend XO Tours’ The Foodie (along with a tour from Saigon Hotpot) to everyone who has asked me about city tours in Ho Chi Minh (they usually think I’d suggest for them to walk haha). It’s a fantastic way to see the city at night, and literally get a taste of Vietnam. I admittedly did not write about the entire tour, even though it is a vivid memory, in order to not spoil the experience. If you ever try it out (and is lucky enough to have Huong as a driver), let me know how much fun you have! 🙂