No, I don’t mean this. But I did sleep my way to Ho Chi Minh.. on a sleeper train!

After 2 days in Huế, I was ready to go to Ho Chi Minh. I was deliberating if I wanted to really spend 20 hours on the train, but plane tickets would cost me $100.. Aside from making a dent in my travel budget, I still had around a week left and I prefer having “emergency money”. Just in case. *books train ride* 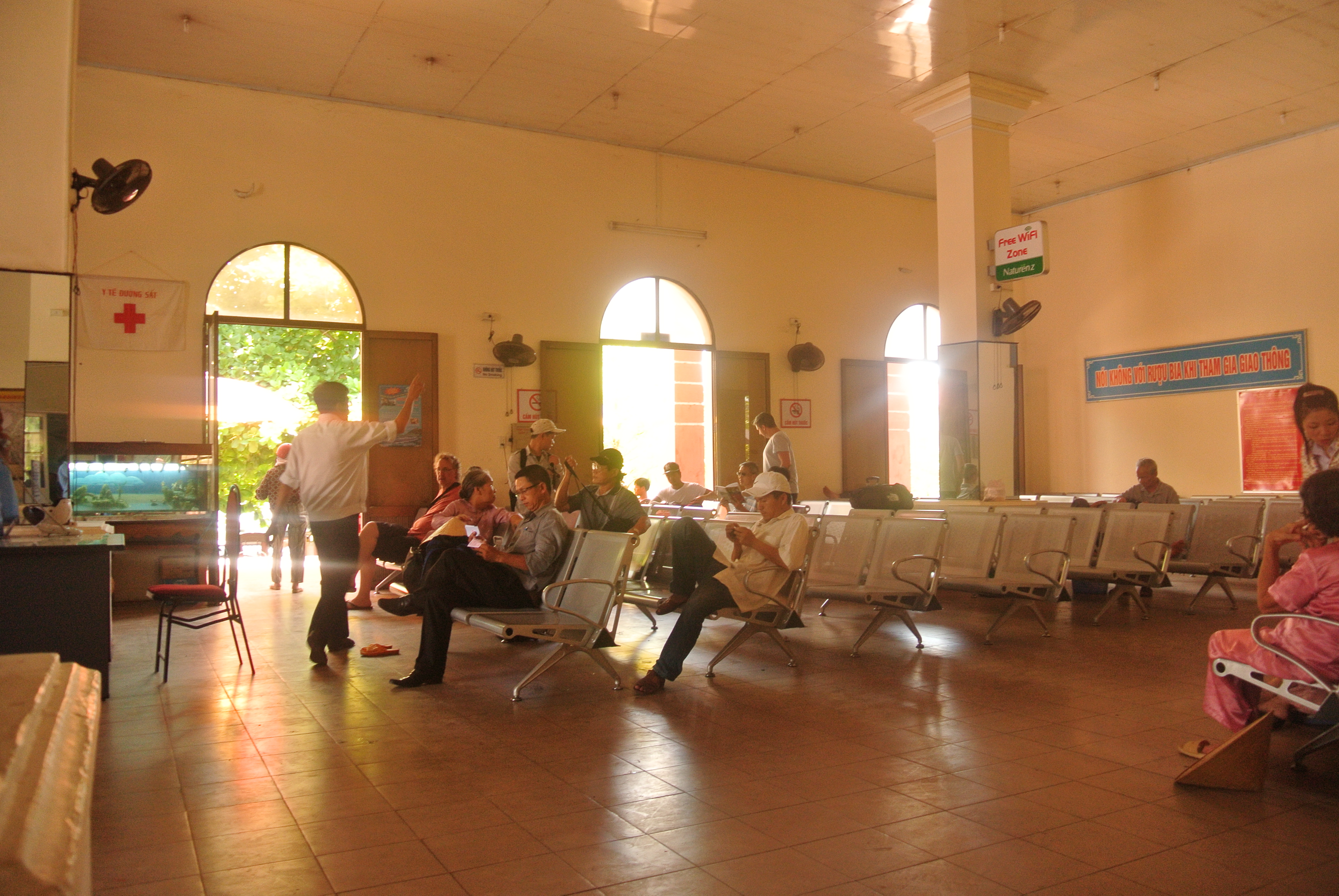 All the train stations had free wifi which I’m thankful for because I booked an Airbnb room for my stay in Ho Chi Minh, and I talked to the host via iMessage about the train schedule and how I can get to the apartment. 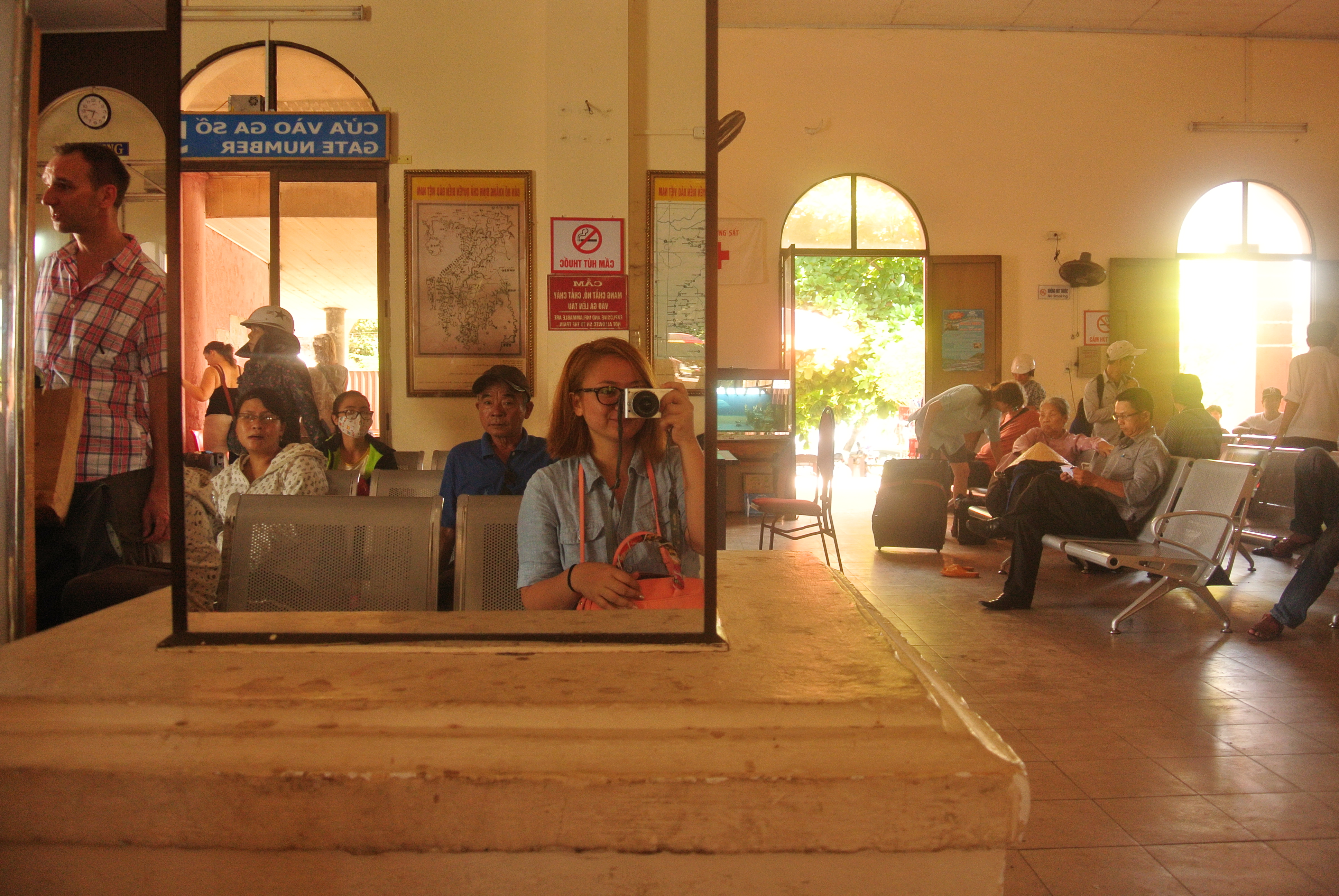 I was on level 2 (upper bunk) since I booked late and all the lower bunks were already taken. 😦 I arrived at the train station 35 minutes before boarding because I was unsure what time the train will be arriving, and missing the train is not an option. At the waiting area, I didn’t understand which gate I should go wait in, but fortunately, a young Vietnamese couple my age (who apparently has noticed me looking around like crazy), approached to help me. The girl took a look at my ticket, said something to the guy who then talked to a staff, and they pointed me in the right direction before they went their way. I swear these people are awesome! A family of European (?) travelers did not have such luck, and they tagged along with me after comparing our tickets and finding out that we are taking the same train out of the city. 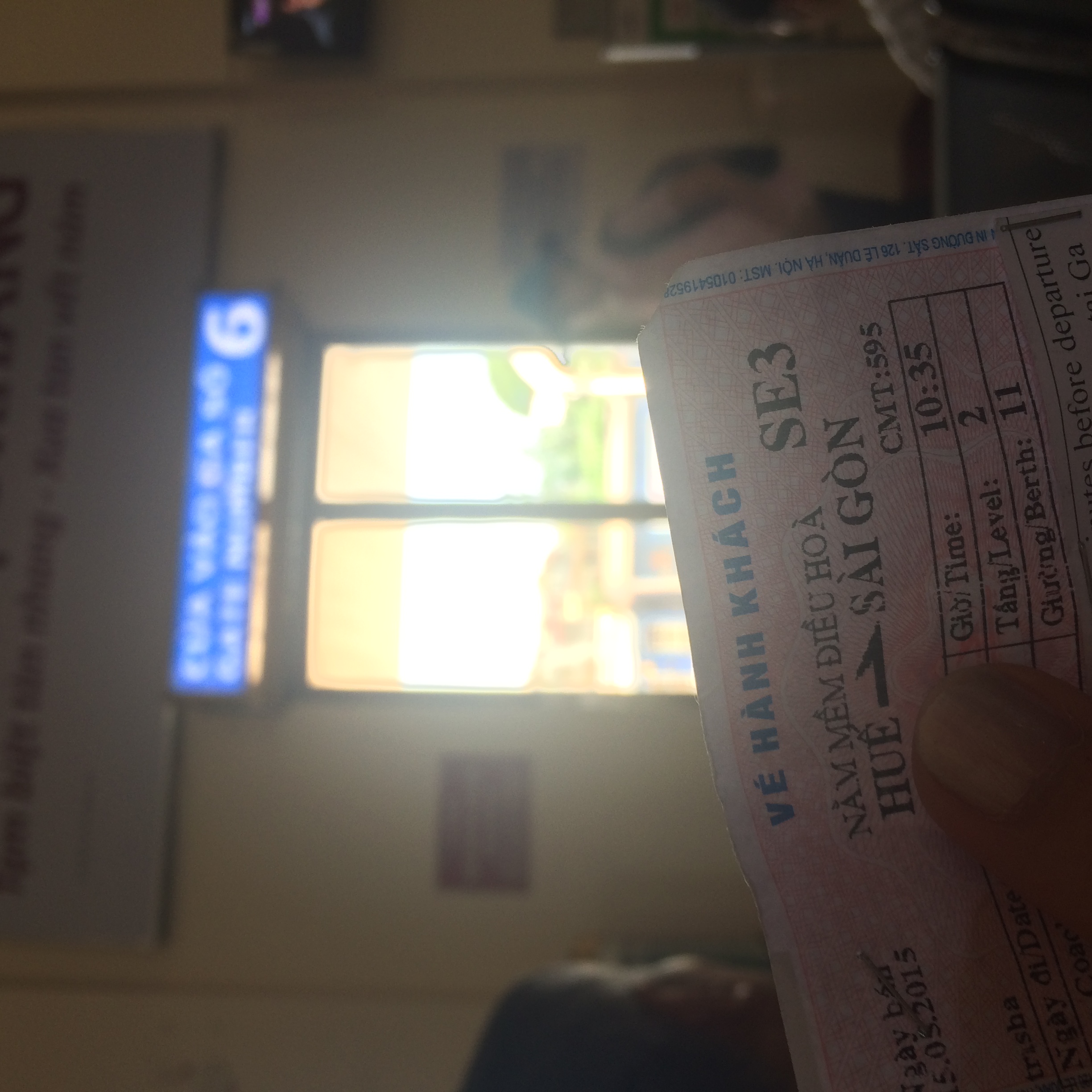 I sat beside a young couple and their son at the waiting area. The wife chatted me up since they were headed to Ho Chi Minh as well for vacation. They have always lived in Huế, and it’s been a long time since she went there. I asked her what’s the best thing about living in Huế (because I’m curious like that), and she told me that cost of living is lower and there are really good schools and university for her son’s education. Ethnicity and culture may vary, but good parents are universally same – they always try to provide the best for their children. 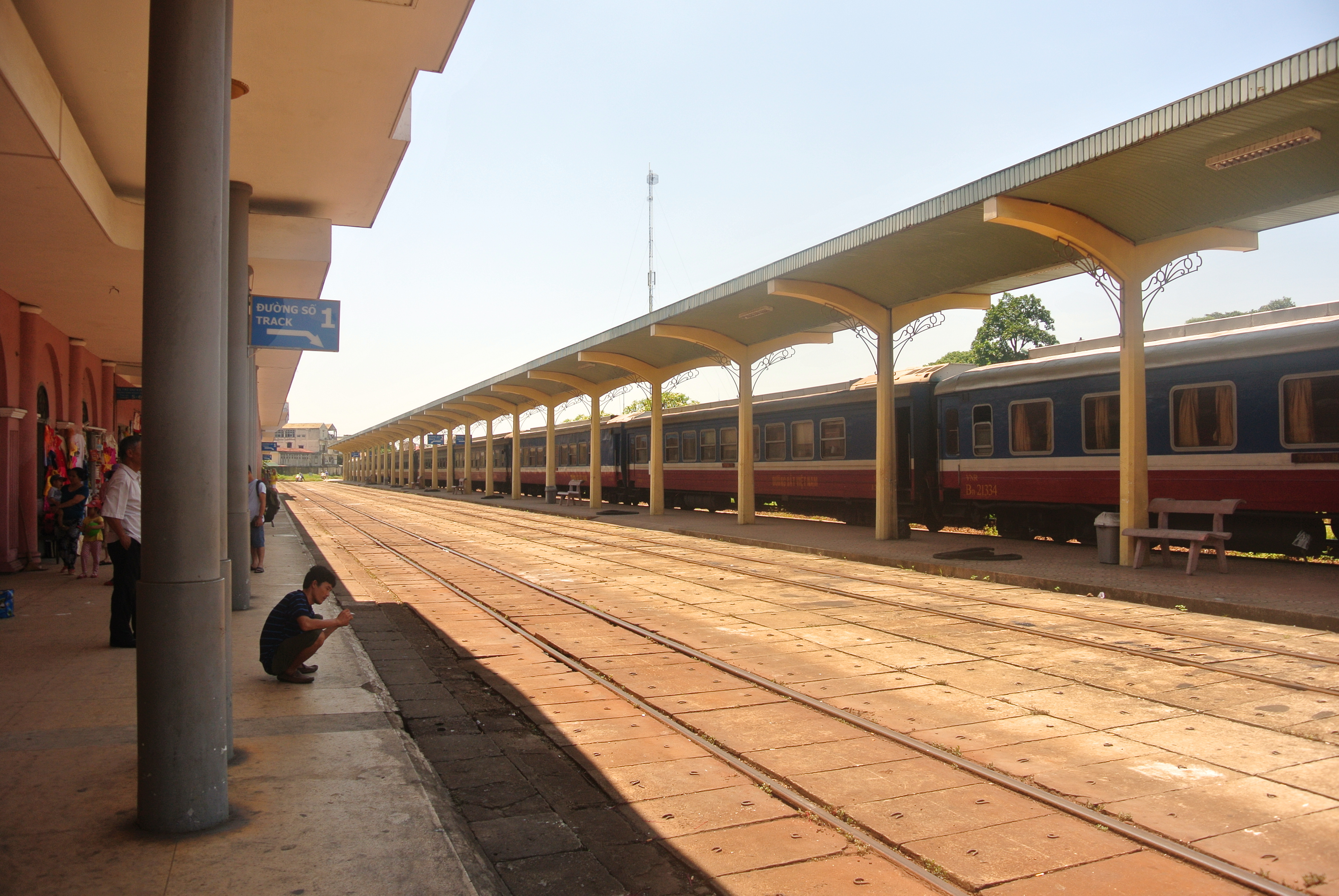 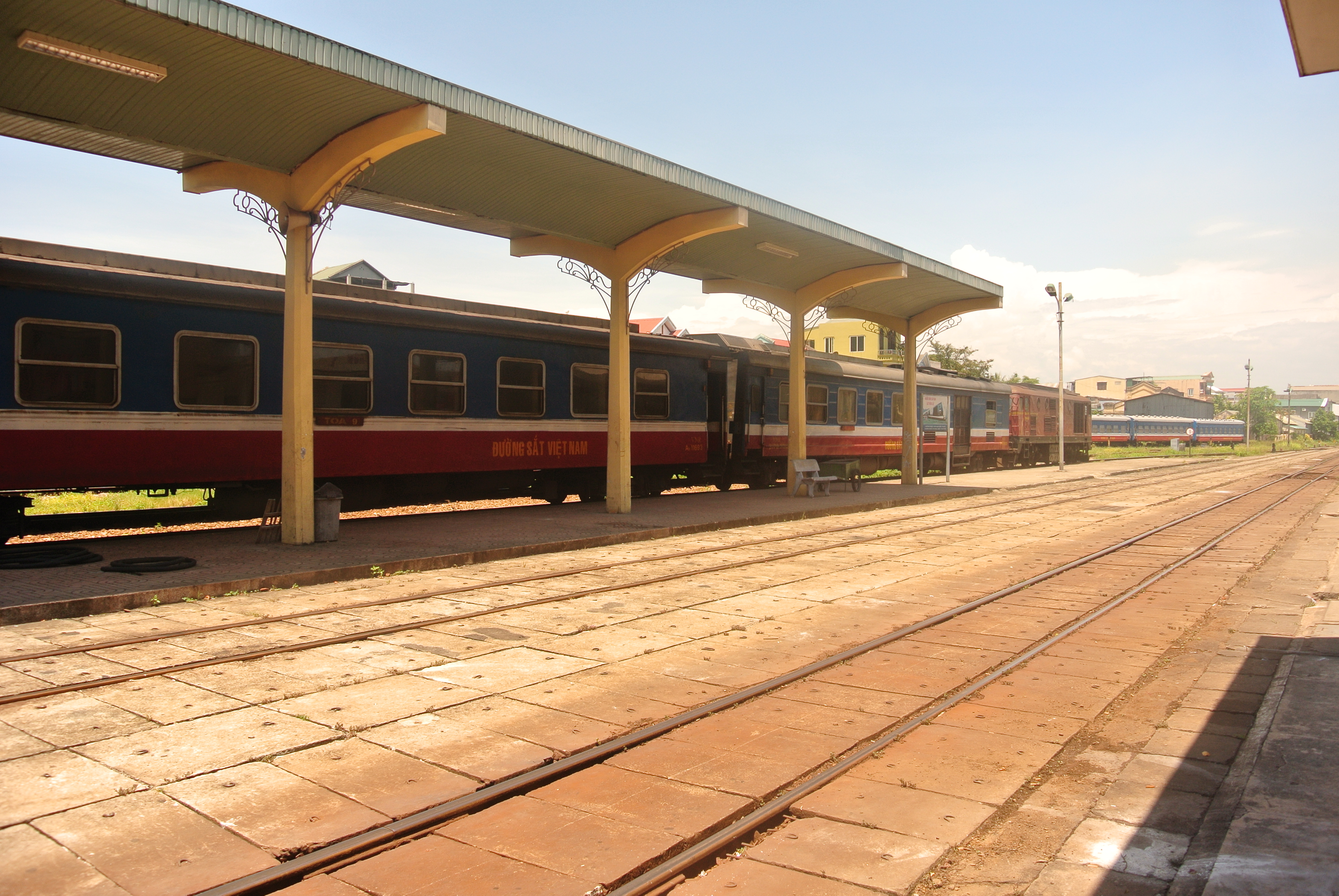 I was praying for the train to come soon (it was 15 minutes late).. or at least before my backpack drags me down. I never really realized it was that heavy since I don’t really spend a lot of time carrying it on my back. If I only knew what would happen next in Ho Chi Minh.. 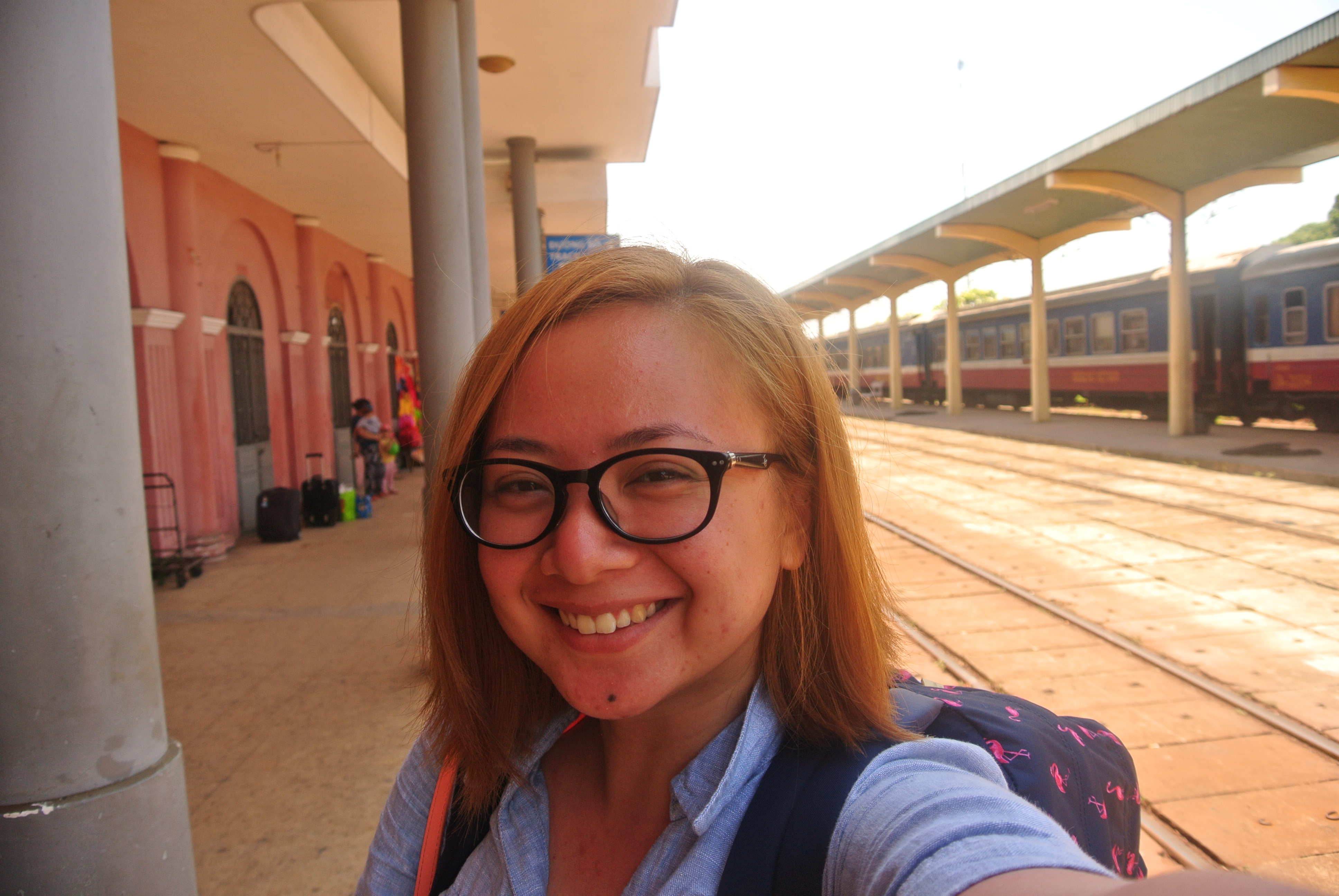 They were a few coaches away (I boarded #8), but the wife (I am so sorry I forgot to write down your name! I am bad with names. :() and her son stood with me while her husband took care of their bags (lucky woman!). I asked if I could take a photo of them to which she readily agreed, while her son almost ran away at that moment. Hehe. We said our goodbyes once the train was in sight and for good reason too. You have to board really quickly when the passengers get off since they try to run on schedule. 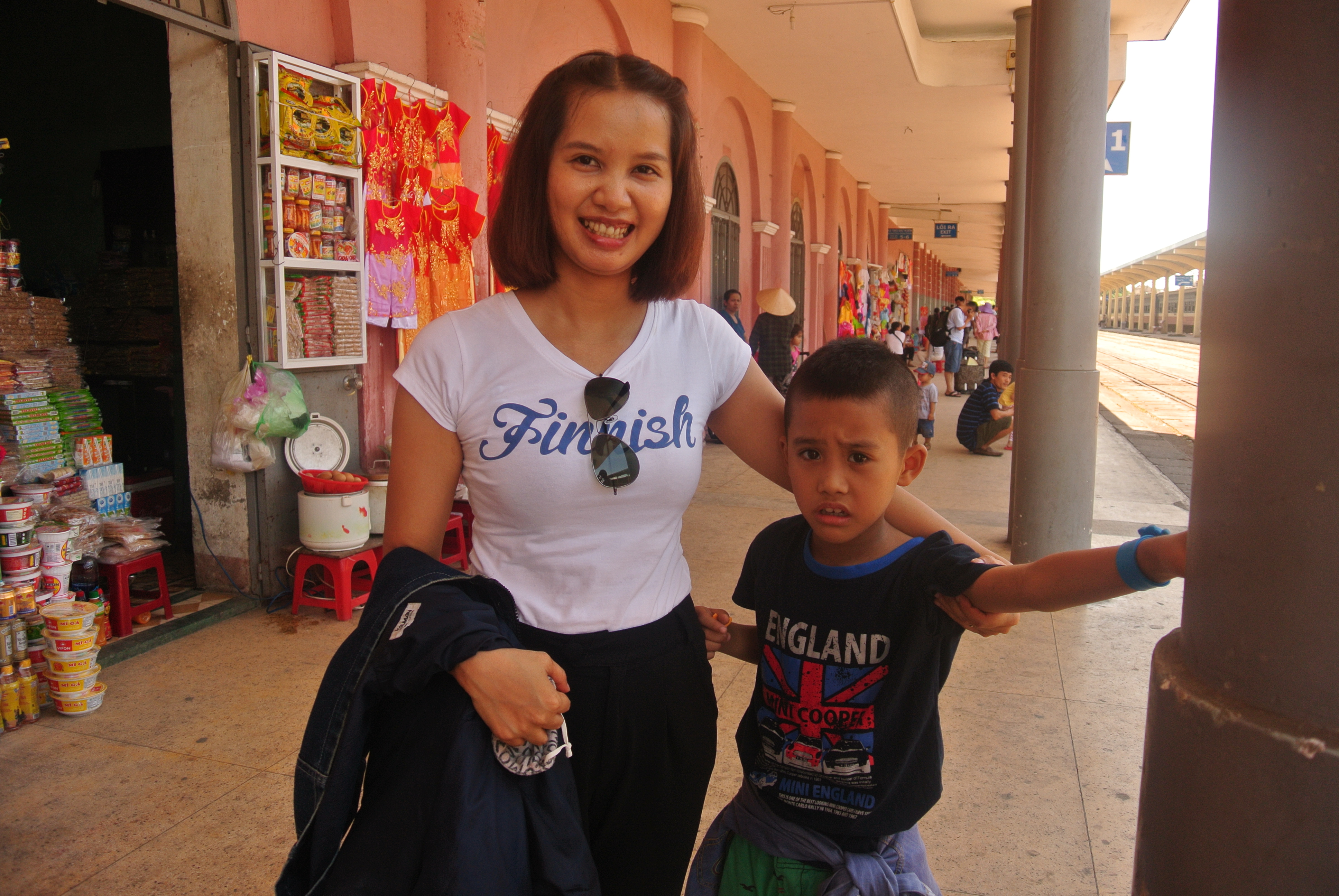 There is a pair of bunk beds in one compartment, a television, a main light switch (if you board with a stern grandma, she most definitely will control it) and a personal one for each bunk’s reading light, a pillow, a comforter, and a bed cover that you will have to put on yourself. The train’s staff changes the sheets if another passenger gets off the train, but you can also ask them for a replacement if you’re not satisfied with it (stern grandma strikes again!). There is no wifi in the train, but wifi guy (the one who occupied the upper bunk across mine) balanced out stern grandma by sharing his mobile data with me and using Google Translate to make conversation. Brilliant! 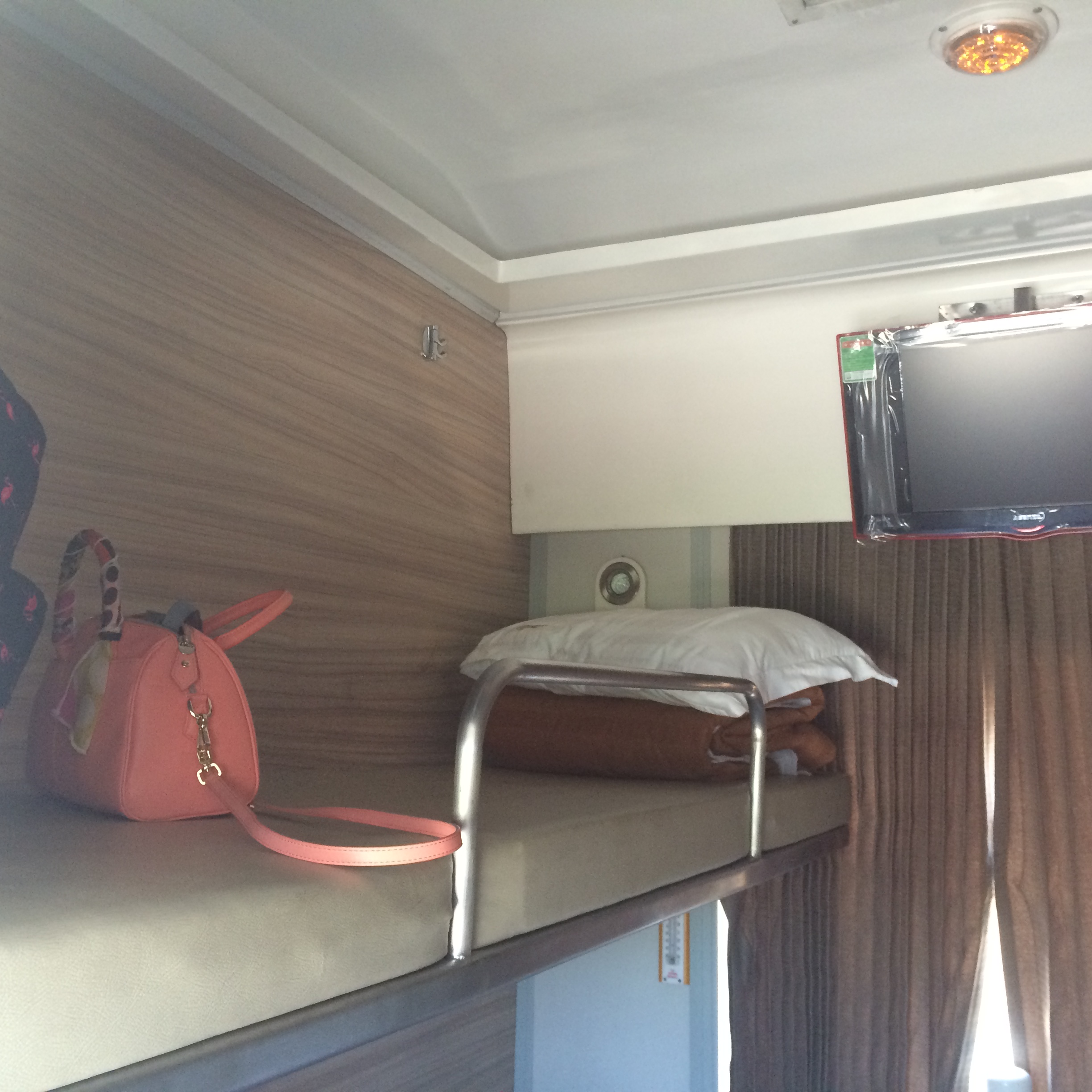 I was either in the hallways, but mostly in bed, because stern grandma from the bottom bunk likes to go tsk-tsk-tsk-ing every time I went down or open the compartment door to watch the view in the hallway (because she kept closing the curtains whenever I open it a little to peek at the view – you can see the nice view in my travel vlog, by the way, the link is at the bottom of this post). I held in my pee (not just because of my great dislike for public toilets), and only made a trip to the toilet when she made one herself so she won’t be in the compartment when I climb down. I even brought along my toothbrush so that I do not have to do it on a separate occasion. Stern grandma even kicked my sandals out of her way – under her bed, hence, I learned my lesson and brought my sandals with me when I got back and just kept it with my backpack in some sort of storage area (you can see it in the photo below). Note to self: get the bottom bunk! 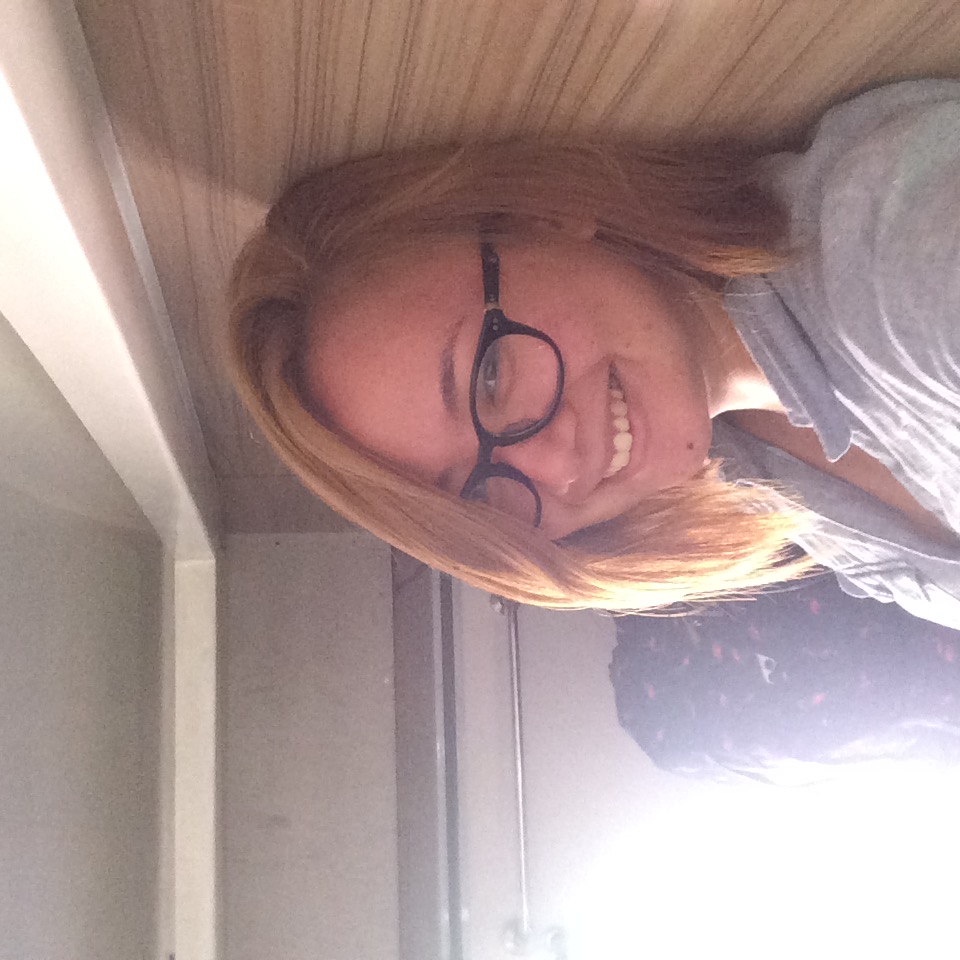 I bought instant noodles from the trolley for VND 15,000. I was asking trolley guy where I can get hot water, and he may have misunderstood my question because after leading me to the hot water, he proceeded to open my noodles and pour boiling water as if he is on a cooking show. Hahaha! I wanted to tell him I know how to operate the thing but kept it to myself because of the language barrier. 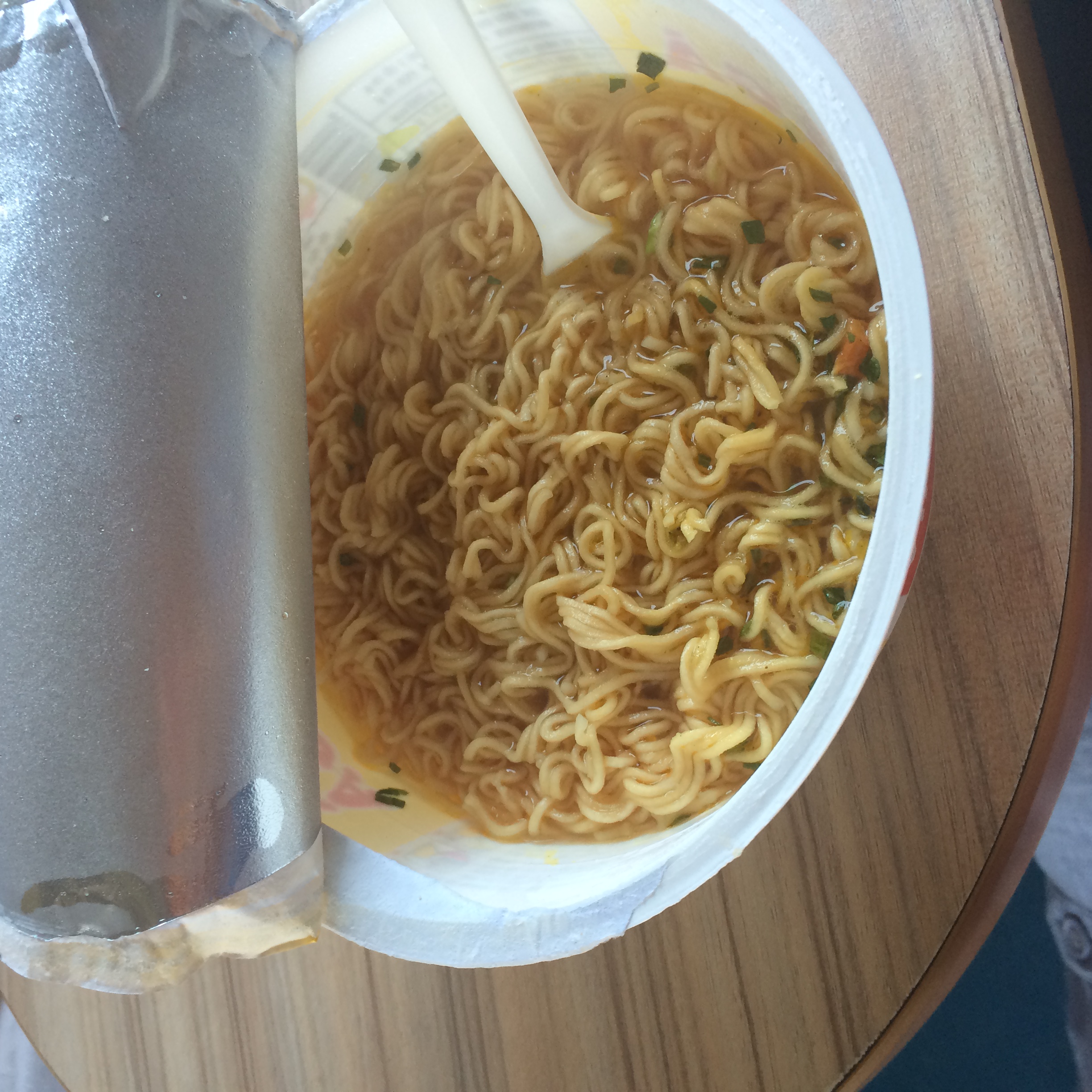 Another trolley guy roams the different compartments selling meal stubs a few hours before dinner. They do give you options but since no one in our compartment speaks English (and wifi guy didn’t know how to explain it, I probably wouldn’t know how to explain the concept of adobo to foreigners as well haha), he made the universal eating gesture and showed me the exact amount of money I should pay for the stub. Stern grandma’s meal looked so much more appetizing, and I think she paid more for it. Me and wifi guy’s VND 35,000 dinner did have a huge serving of rice, chicken fillet, two strips of beef, soup, and sauteed chayote and carrots. It has made me so full that I was very sleepy after. Hehe. 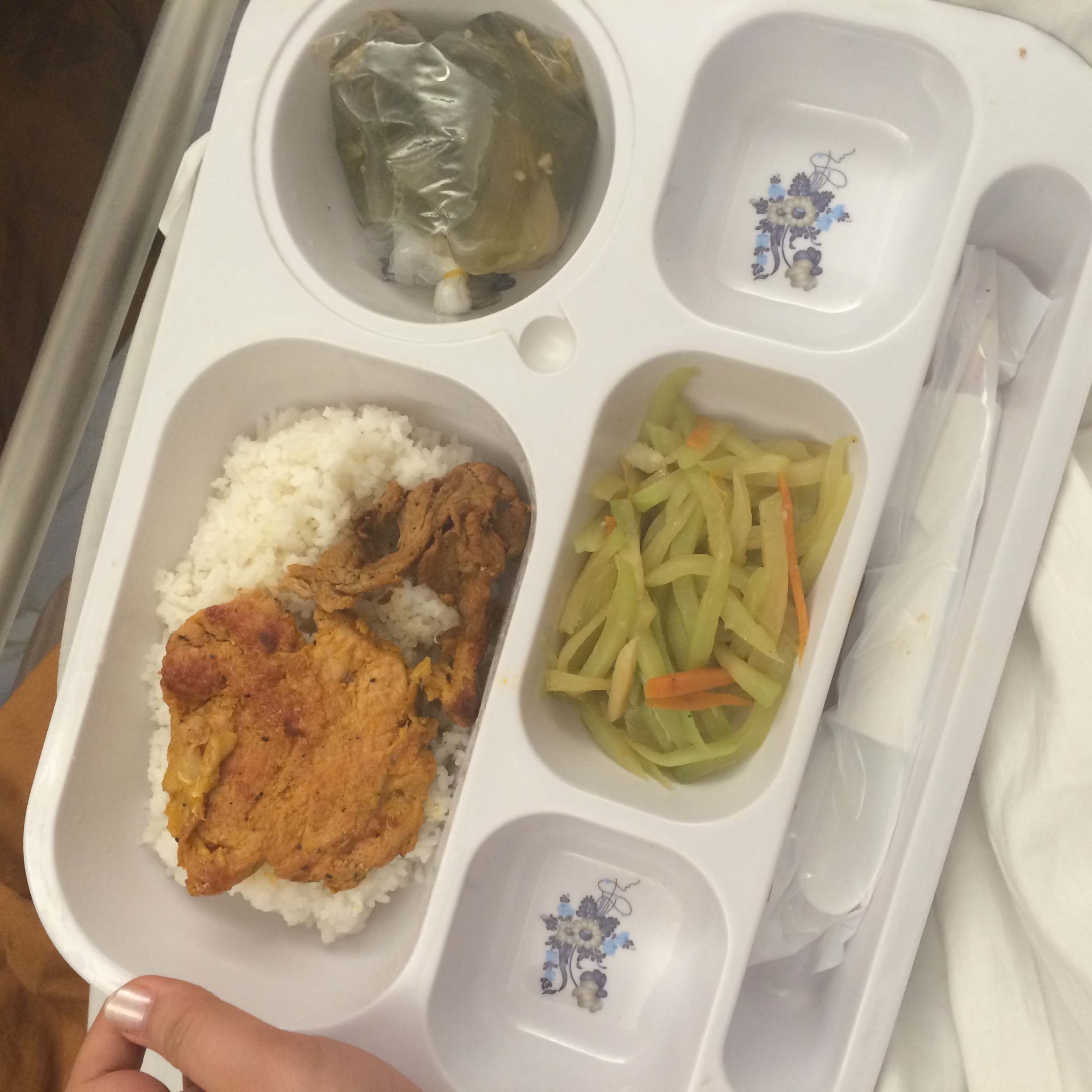 Wifi guy got off the train a few stations before I did, but he did put up four fingers before he left to tell me that I only had four stations to go before arriving in Ho Chi Minh station, which is the last station. I was in actual awe of myself (hahaha yes I just said that). I can proudly say that I traveled end to end of the Reunification Express by myself for a total of 34 hours, without having to learn Vietnamese and not even using English!

When I got off the train, I messaged Liem that I will be taking the bus since he sent over instructions on different ways to get to his apartment, along with a screenshot of Google Maps and a photo of the gate. His apartment, although smacked right in the tourist area (District 1), is in a quiet neighborhood which is arguably the best part for me after staying in noisy hostels for the past week. I took a bus to the Ben Thanh station, missed the stop and had to walk one kilometer back. It would have been an easy feat if it wasn’t for my heavy backpack and the sun over my head (lol). I took another bus, showed the driver the address to which he said “okay, okay”.. only to find out I missed my stop again after 15 minutes. So again, I walked, showing the address to strangers until I finally found myself in front of his gate. He may have gotten to work late that day since it took me more than an hour to get there. Haha! 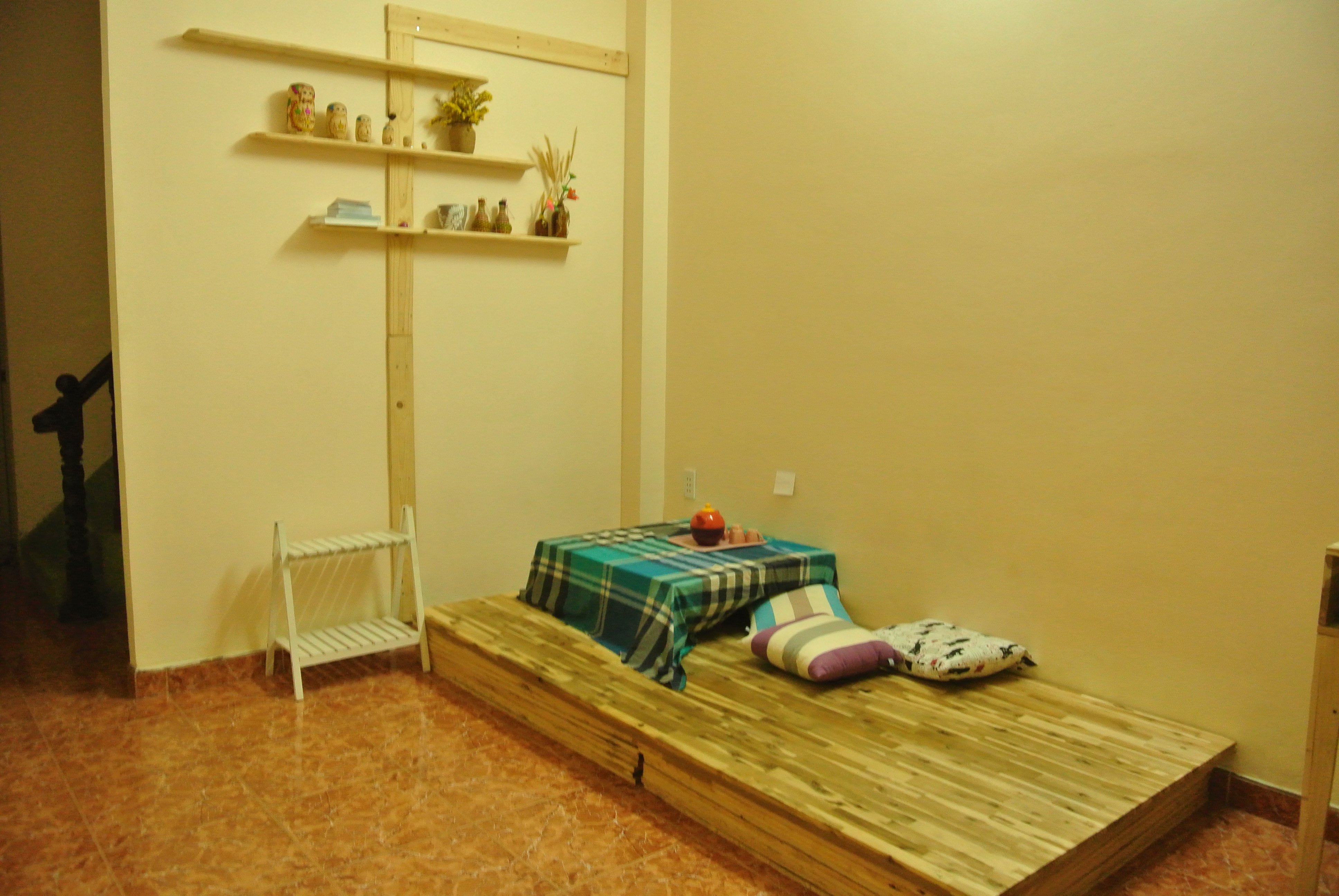 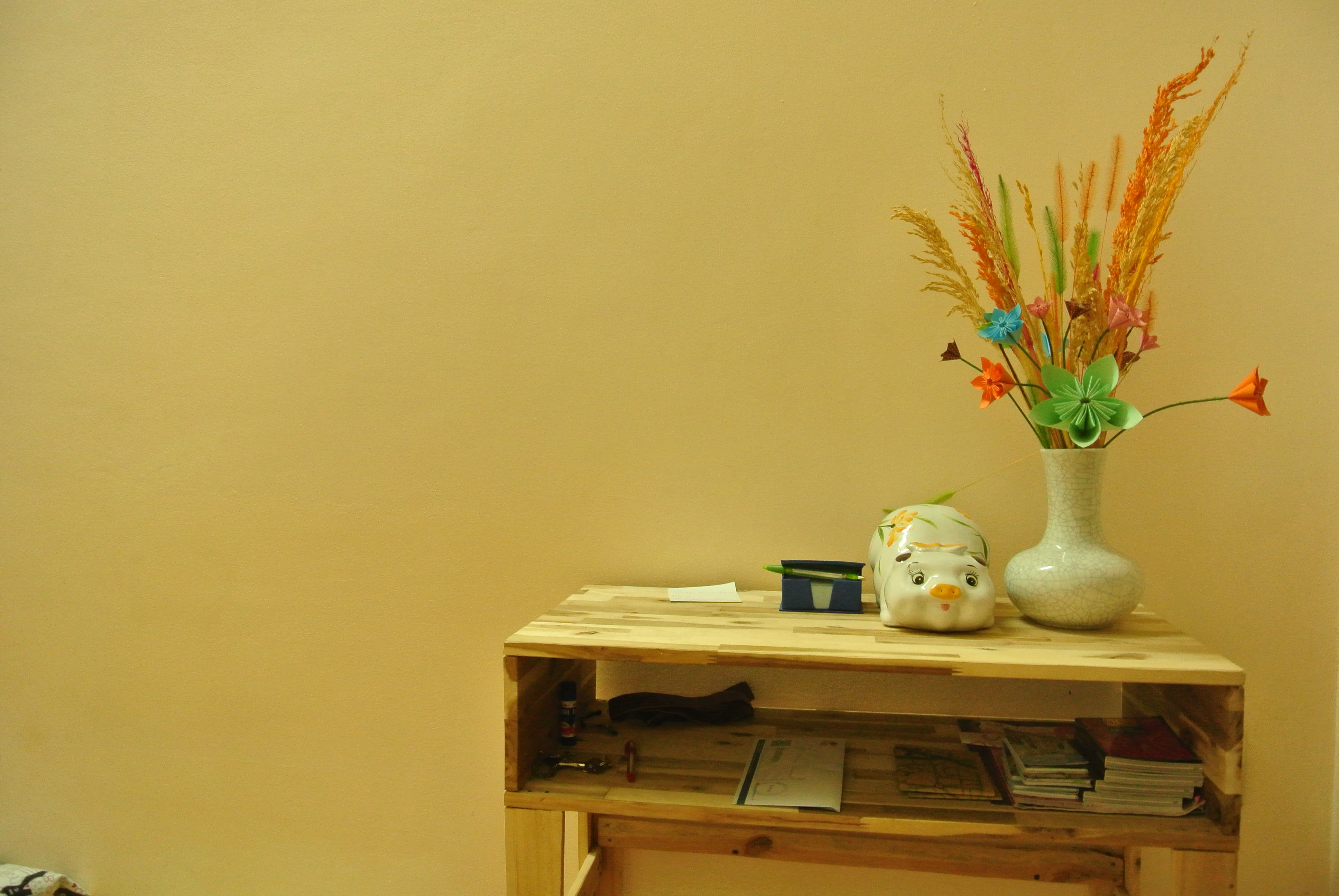 My Airbnb host, Liem Pham, had the cutest rooms and it looked exactly like the photos. The entire house is cleverly designed as well, maintaining the theme all throughout and made good use of the light outside with all the glass panels in the stairway. He gave me a map he made a list of all the tourist spots and restaurants, and he wrote down his personal recommendations for me as well since I wrote on my Airbnb profile that I enjoy eating. 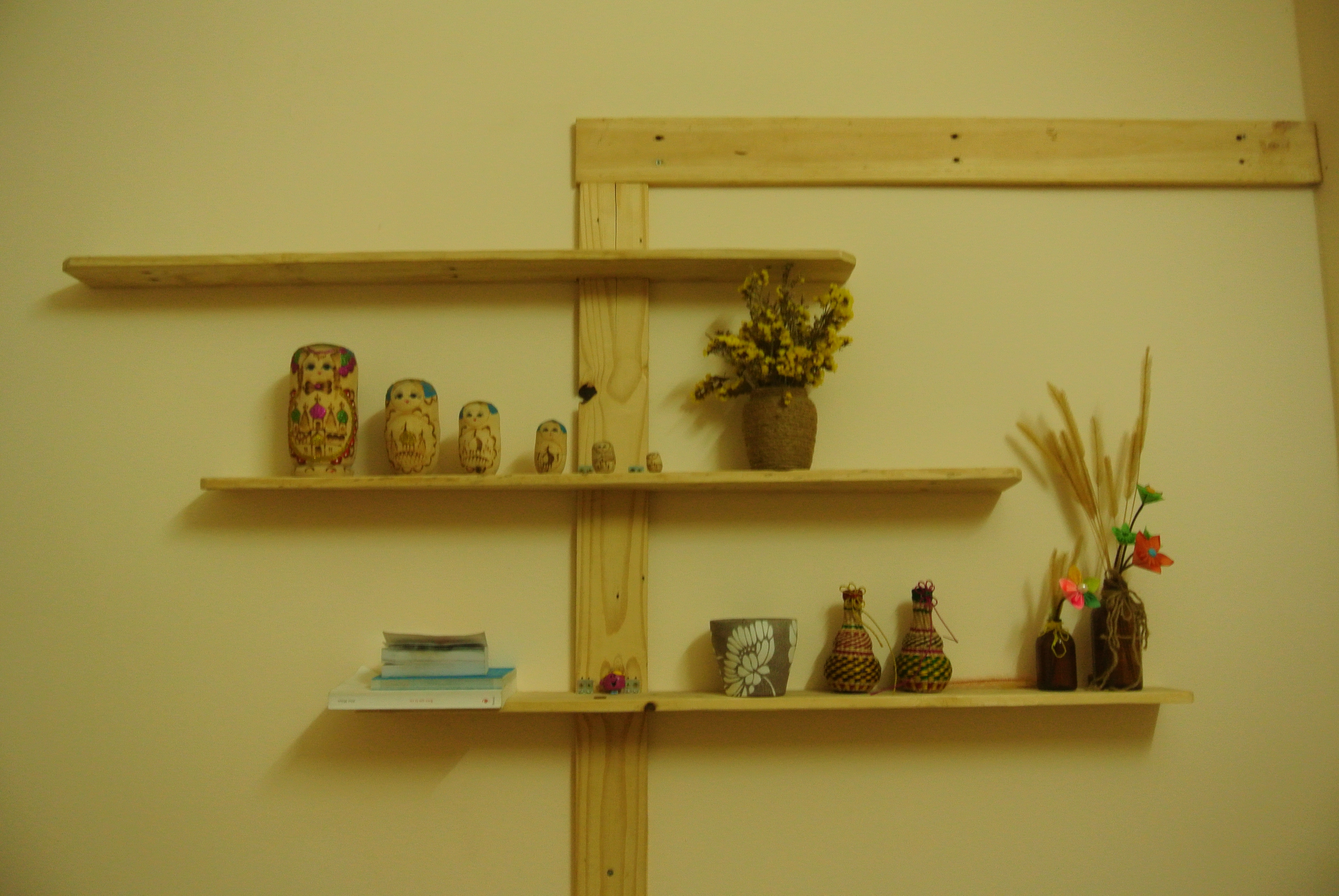 Finally! A room for myself. 🙂 Both hostels I stayed in had intermittent wifi connections, and I was so glad that the wifi was reliable enough for me to be able to Facetime C, and video calls my mom and siblings. 🙂 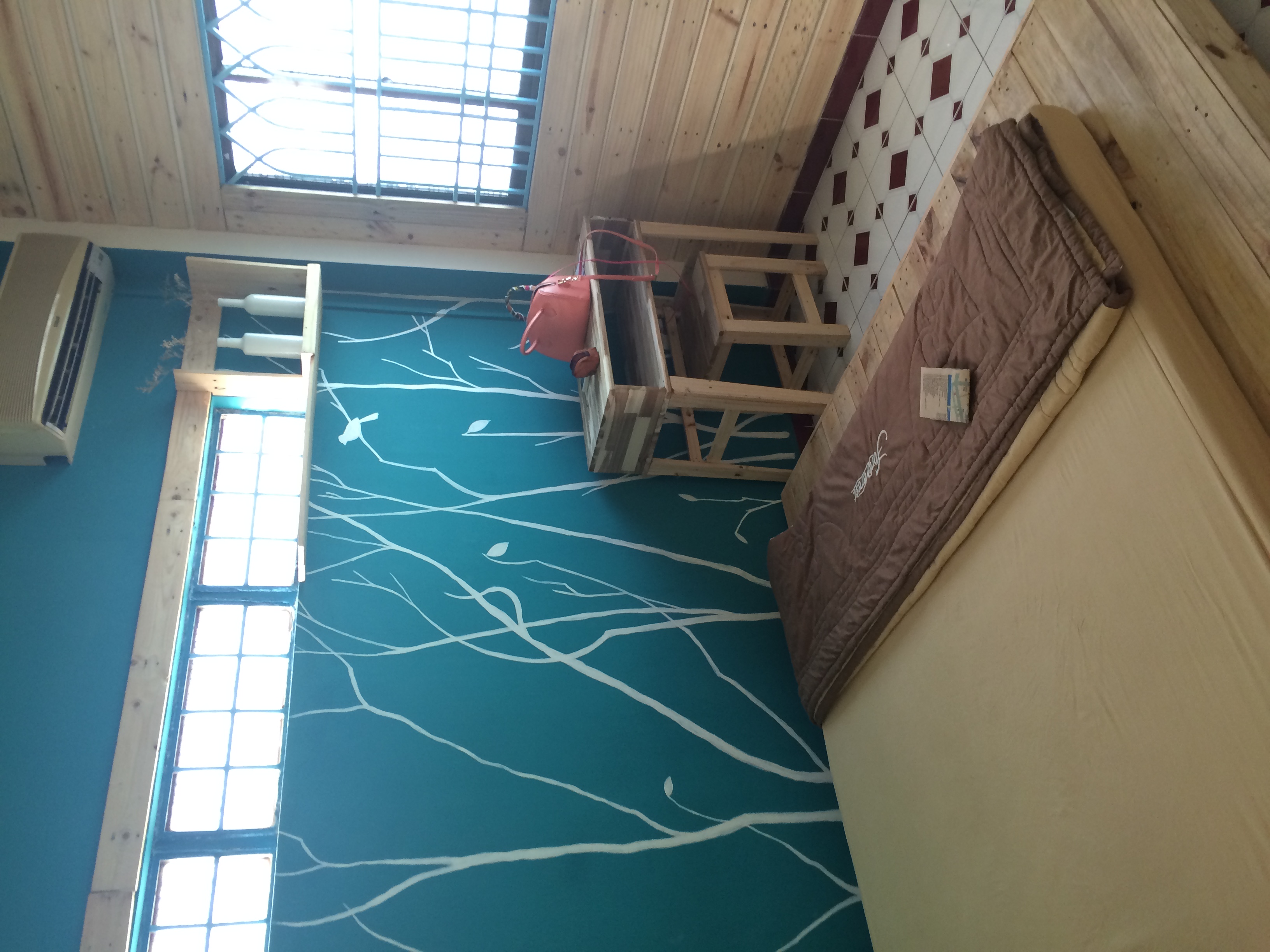 The increase in my accommodation expenses would have been an issue if I was traveling longer, but I still feel like transitioning from the 8-person room with inconsiderate strangers ($5/night) or crappy bathrooms ($10/night) to a solo bedroom with a shared bathroom that works and has strong wifi connection is worth the extra buck ($20/night). 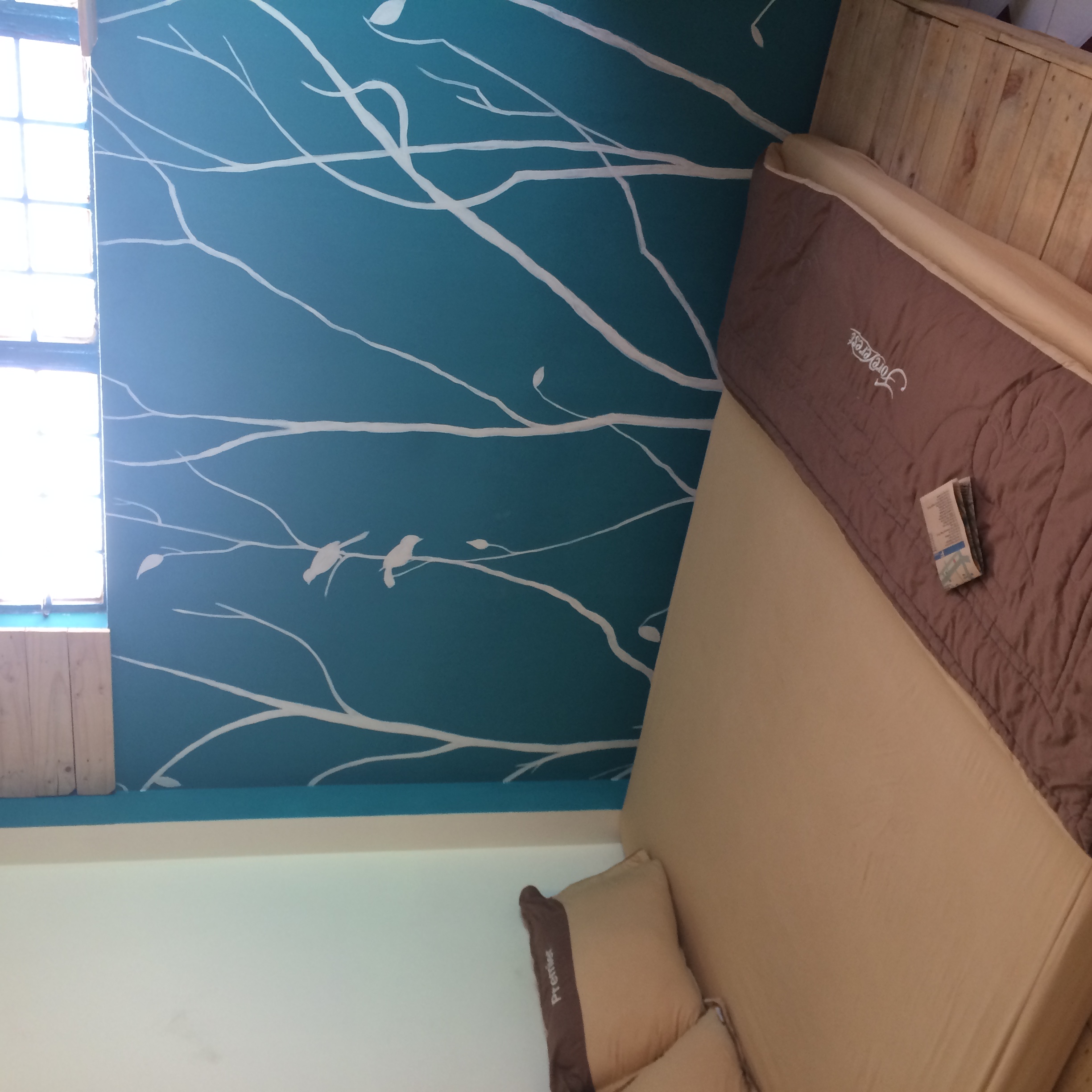 I also made another friend in Vietnam, Vania, who has an Airbnb listing. Go check her out as well! 🙂 Get PHP 1,172 off your first booking if you sign up using this link. You’re welcome. 🙂

I have finally started writing about Ho Chi Minh, then I would be moving on to my Cambodia posts. I have mixed feelings about it, though, reliving this experience has been nice and writing about it, therapeutic.. but once it’s over, I have to come up with more blog content. Well, I did say I wanted to hone my writing skills.. And my vlogging skills – again, I am making a vlog after this series. Let me know if you have any questions or vlog suggestions by sending me a message with #CupcakeGirlVlog in the first line. Looking forward to hearing from you guys! 🙂