Saying a lot has happened since I last wrote about this trip is an understatement. I just celebrated my birthday last week (real time and not blog time because my posting schedule is as unreliable as the country’s LRT/MRT lol) wherein I turned *drumroll* 24! I had a surprise birthday party arranged by my mom, a low-key actual birthday, the long weekend, another round of trips to the hospital, and finally buying my own domain (yasssssssss!). So yeah, I chose to prioritize a lot of other stuff over writing. Anyway…

It was around 8:30 in the morning, after another Vietnamese announcement, that the kind old man from the train (see previous post – link at the end of this one) stood up and started taking my backpack out of the compartment above our seats. He was gesturing for me to stand up and take my bag. I wish I could have said more than cam on and that he knows how truly grateful I am.

If you’re interested in how I found out about Huế, I went to Google and typed in all the train stations, noted down the ones I find interesting and the train schedule. When a city is touted as the imperial city of Vietnam, it tends to stand out and a visit to Huế became a must. However, a problem arose upon checking the map since the sites were far in between and I would need to book a tour. I decided on getting a motorbike tour because when in Vietnam, ride a motorbike (my logic is infallible haha). So I got in touch with Hieu of Hue Riders to ask if I could start the tour a bit later (their day tour starts at 9 AM) since I’m not sure if the train will be arriving on time and he told me that a driver will just pick me up from the station. True to his word, Linh, wearing his Hue Riders vest on and my name printed out on a white sheet of paper, was waiting for me at the train station. 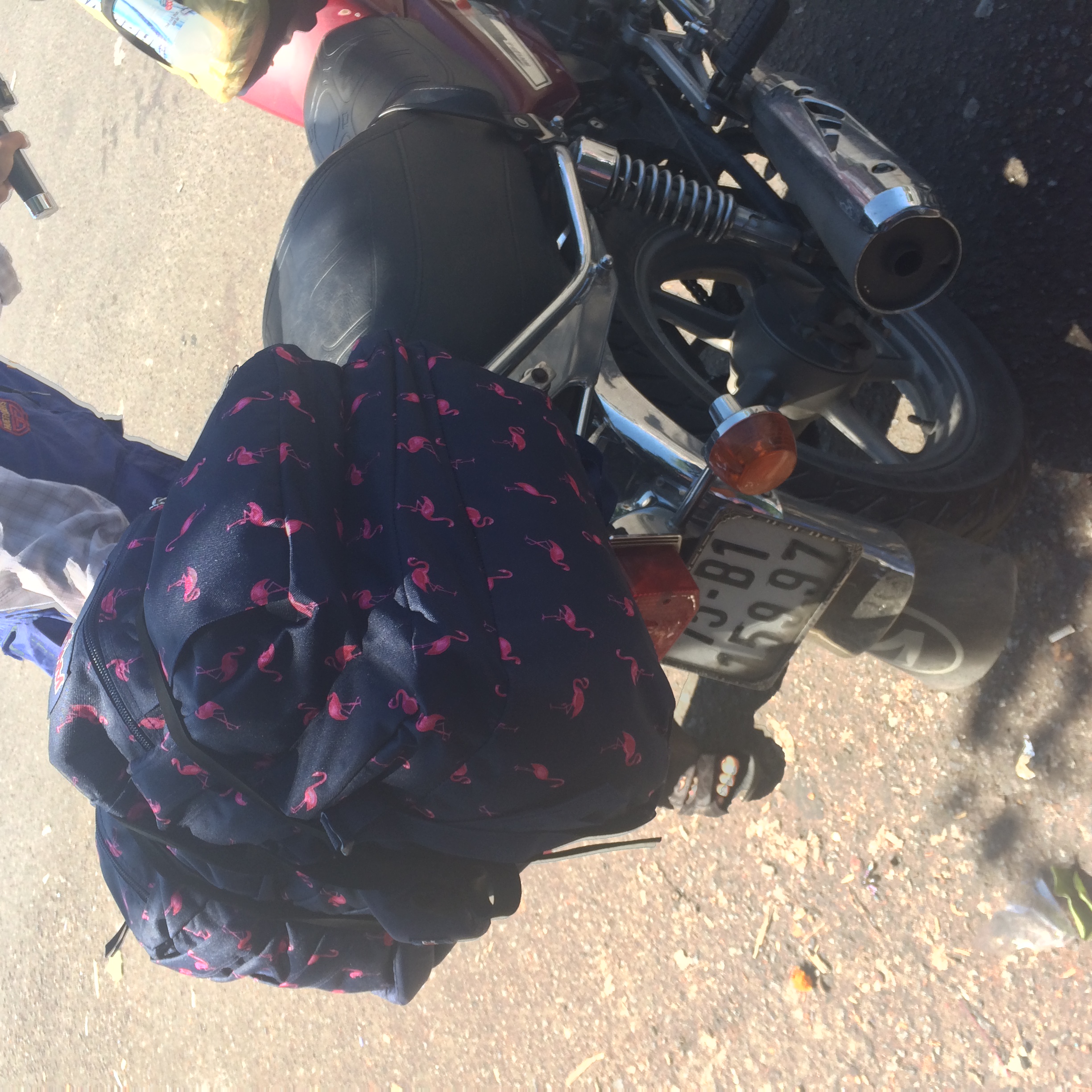 He tied my backpack to his motorcycle, and he spent the first few minutes upon our meeting to orient me with the dos and don’ts of being a motorcycle passenger. I got on the bike with my mother’s warning reverberating in my head, “never get on a motorcycle or you’ll die an early death”, and prayed that I get home safe or else my clueless mother (I didn’t tell her I booked motorbike tours) would kill me for sure. Fortunately, I got to the hostel safely, where I dropped off my bag and proceeded with the tour. No changing of clothes, no brushing of teeth, and *gasp* no showers. Time is important and I wasn’t about to waste mine or Linh’s.

He showed me a map to ask me what I would like to visit for the day, and I just told him to go with the usual itinerary. I don’t really enjoy a packed itinerary since I like to take my time when touring. But if you really want to maximize your time and money, I’d suggest to anyone planning to visit Huế to do their research and state all the places they really want to visit.

Our first stop is an out of the way bridge, the Di Tich Cau Ngoi Thanh Toan (The Vestige of Thanh Toan Tile-Roofed Bridge). The bridge was constructed in 1776 with a wooden structure and tile roof, Thuong Gia Ha Kieu style, which meant “house is above the bridge is at the bottom” (vague translation if you ask me), including seven apartments. The central is for the worship of Ms. Tran Thi Dao, a child of Than Thuy Chanh Village and wife of a high-rank mandarin in Thuan Hoa Region who offered the funding for the construction. It was recognized as a national heritage in 1990 for the unique artful architecture and beauty. I honestly found this place romantic, like a setting for a drama.

The people of the village hang out in this bridge on hot days, such as this one.

Flood water meter. They measure and mark the worst floods that hit the village. There was even a time where even the bridge was submerged in water!

Cotton trees surround the area and I swear, it really felt like I was in a drama!

Every house we passed by had their own temples, but this one was so fancy that I had to wonder whether a family lives here. Linh tells me that they only open the temple gates once a year, during the feast day, hence, photo taking inside is not allowed. He then took a photo of me in front of it, “so you can tell your friends you drove a motorbike in Vietnam!”, he said.

With my camera still in hand, he proceeded to climb a tree to take a photo of the temple. He ran back to the bike and we drove off, laughing like kids who did something they shouldn’t have done. Hihi.

Our next stop is the Tomb of Khai Dinh. He was a somewhat unpopular emperor from the Nguyen Dynasty since he was “influenced” by the French government. His tomb was completed in 11 years using people’s taxes. To all the Pinoys out there, doesn’t this story sound familiar?

More stairs after passing the gate.

If I was a dog, my tongue would have started hanging out because the stairs in this place are CRAZY. A tip for anyone planning to take the motorbike tour (and in my case, coming from the train), do not forget your water bottle! This small bottle of water cost me VND 20,000. 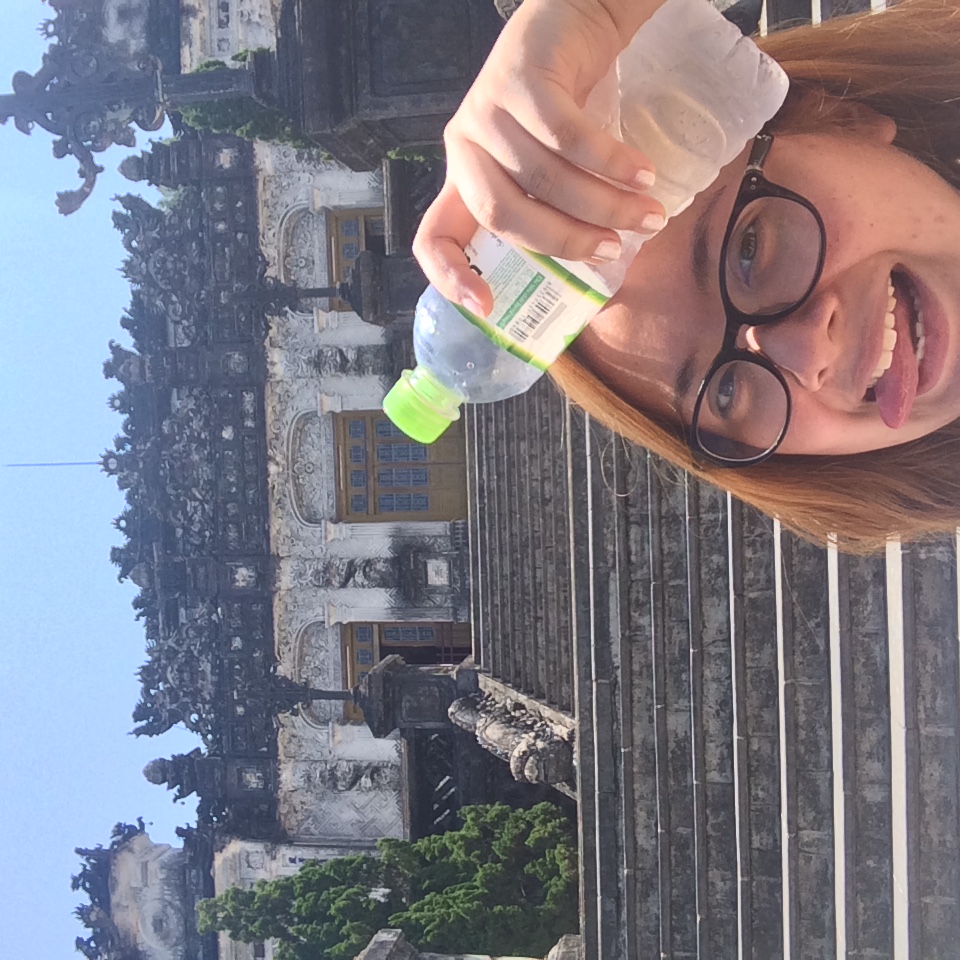 Inside the palaces are intricate designs and grand decor.

A statue from Marseilles.

Since we were already on the mountain side, Linh brought me to this spot overlooking Perfume River. It was a secluded spot and no other tourists were there.

The view is very calming. We talked about the similarities of life in Vietnam and the Philippines, and how tight-knit families are.

Before this post ends, just wanted to say that I’m doing a vlog! Send me a message with questions and blog ideas. Please put #CupcakeGirlVlog in the first line of your message so I’d know to include it since I try to answer your messages as soon as I’ve read them. I really encourage everyone to send me questions because I tend to blank out when making vlogs cos I’m usually unsure what people want to hear from me. Hahahaha!