It’s finally the weekend! For more timely updates on my life, just in case some of you are interested, I update my Instagram (@teeshue) more often. 🙂 I’m a bit unsure on whether I have already written about how I impulsively bought a plane ticket for MNL-HAN and REP-MNL. A lot of my friends had done the Vietnam-Cambodia combination and I was horribly unaware that they came from Ho Chi Minh! The rebooking fee for airfare (I flew via Cebu Pacific) was horrendous and HAN-REP flights were crazy expensive. I decided to travel by land and arranged stopovers in between.

On my first day in Hanoi, I bought a $30 soft seat ticket to Hue. The Reunification Express did not have a “Hop On Hop Off” kind of ticket so you would have to either buy your tickets in advance (there are travel agencies where you can book online and they will deliver it to your hotel), on the day itself (not something I’d recommend) or buy it a few days prior. 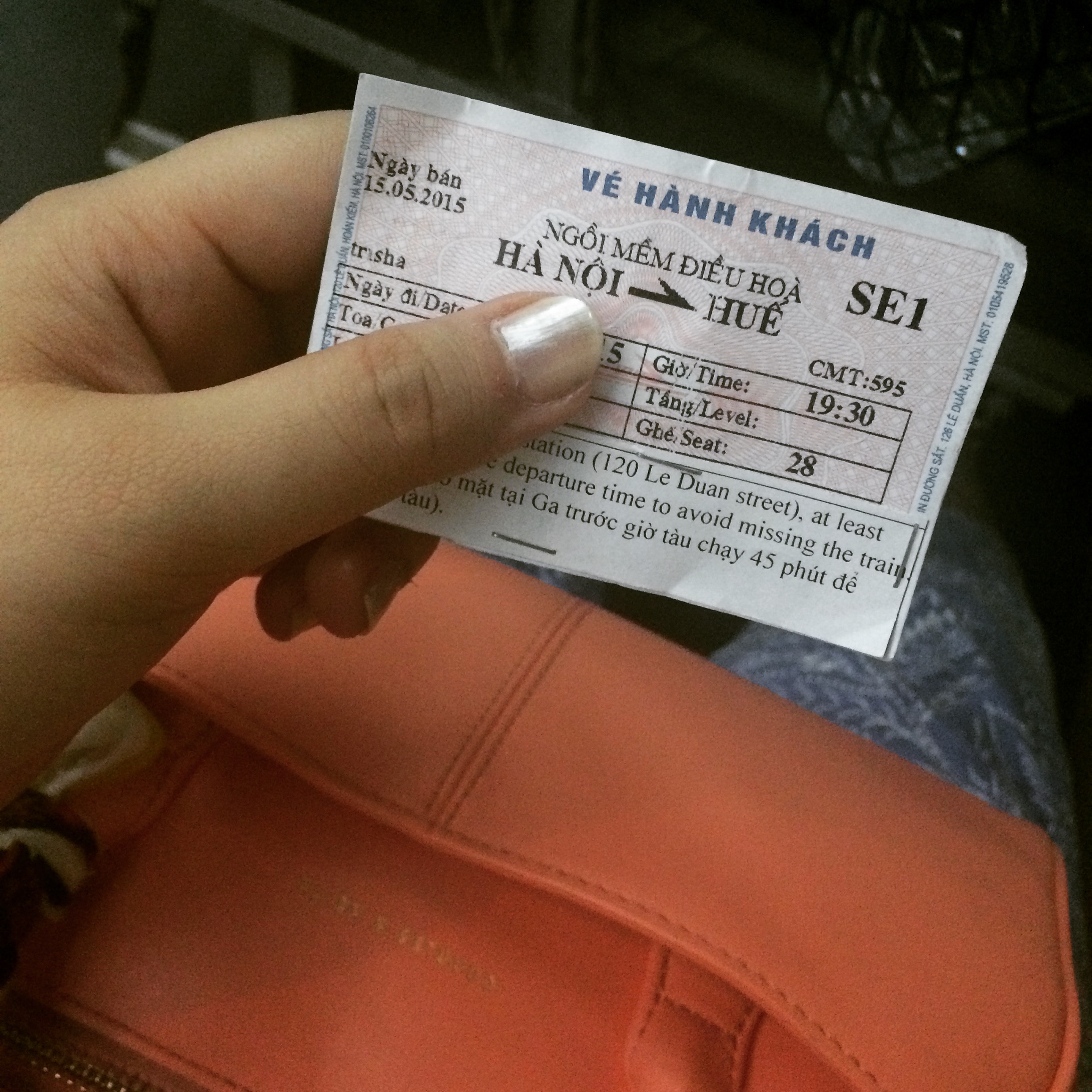 I approached Phung of Central Backpackers Hostel and the ticket cost almost the same as I expected, thanks to research. I once took the 14-hour night bus to Cagayan Valley from Manila so a soft seat in an air-conditioned coach seemed reasonable. I also got a free bottle of water and front row seat to the television. CAN I JUST SAY THAT I WATCHED THE VIETNAMESE VERSION OF MY HUSBAND’S LOVER AND BE CAREFUL WITH MY HEART!!! I also watched a Vietnamese drama after. It started with this girl (with bangs) in a fancy party who everyone is ignoring and she was trying to seduce this mustached guy but Mr. Suave is very “meh don’t care”. Then there is this girl who everyone likes (I’m assuming because the girl with bangs is a wallflower) just stares at a faraway distance like “I’m pretty and I know it so you can all suck it” and Mr. Suave is in lurve with her and they drink champagne. Then Ms. Congeniality smiled smugly at Wallflower like “I win bitch”. Then fast forward to next morning where Mr. Suave wakes up beside Wallflower and *dun dun dun* they are both naked! Ms. Congeniality then calls and Mr. Suave tries to act like nothing happened and yet acts very suspicious the entire episode. Wallflower is pretty happy and has started stalking Mr. Suave – I’m guessing, to insist that their crazy wild night of sex (which both of them do not remember by the way – I’m smelling a setup/plot twist) meant something but gets heartbroken because Mr. Suave insists otherwise. Sorry dear, that’s how men are. There were some plotting between supporting characters and I seriously wished it had subtitles because HELLO I’M HOOKED. Other points of interest: guy hides in the grass while watching other guy sneaking out to drop off a letter in the mailbox of a huge house. There’s also a horror drama and an Indian drama involving man slaps. Now that’s a cultural experience. 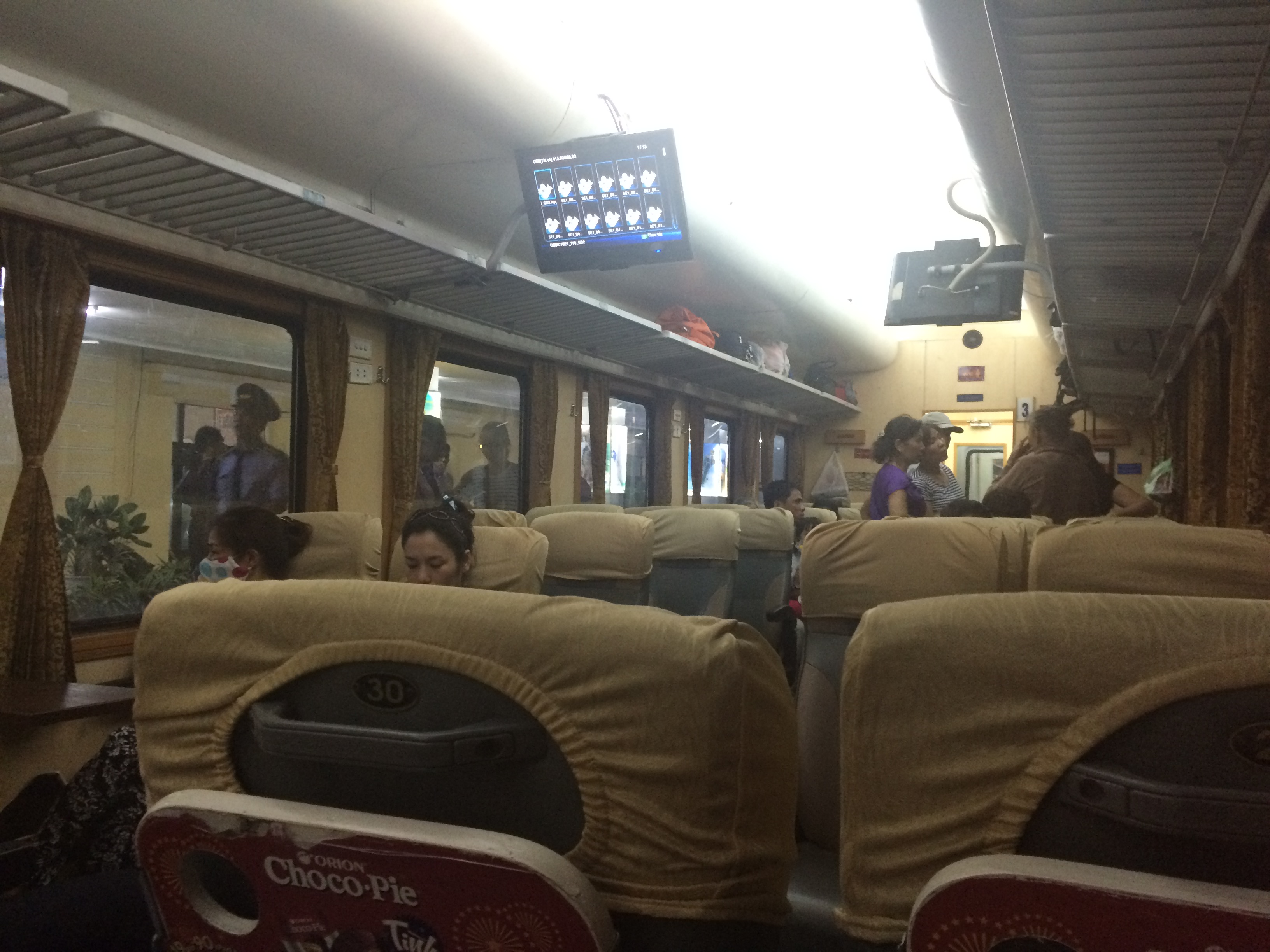 I was the only foreigner in the entire coach. At first, I was seated next to a mom and daughter combo. That little girl is a ball of energy. She’s either crying or running around the coach. Also, the mom thought I was Vietnamese! Now that was new. I almost always get mistaken as Chinese or Korean (because of the hair color), but never from the Philippines. How to fit in – be super chill, remove your slippers and find the most comfortable sitting position in the train (even if it means putting your feet up or crossing your legs – just make sure that at least one of your feet is bare). Blend in with the locals – check! 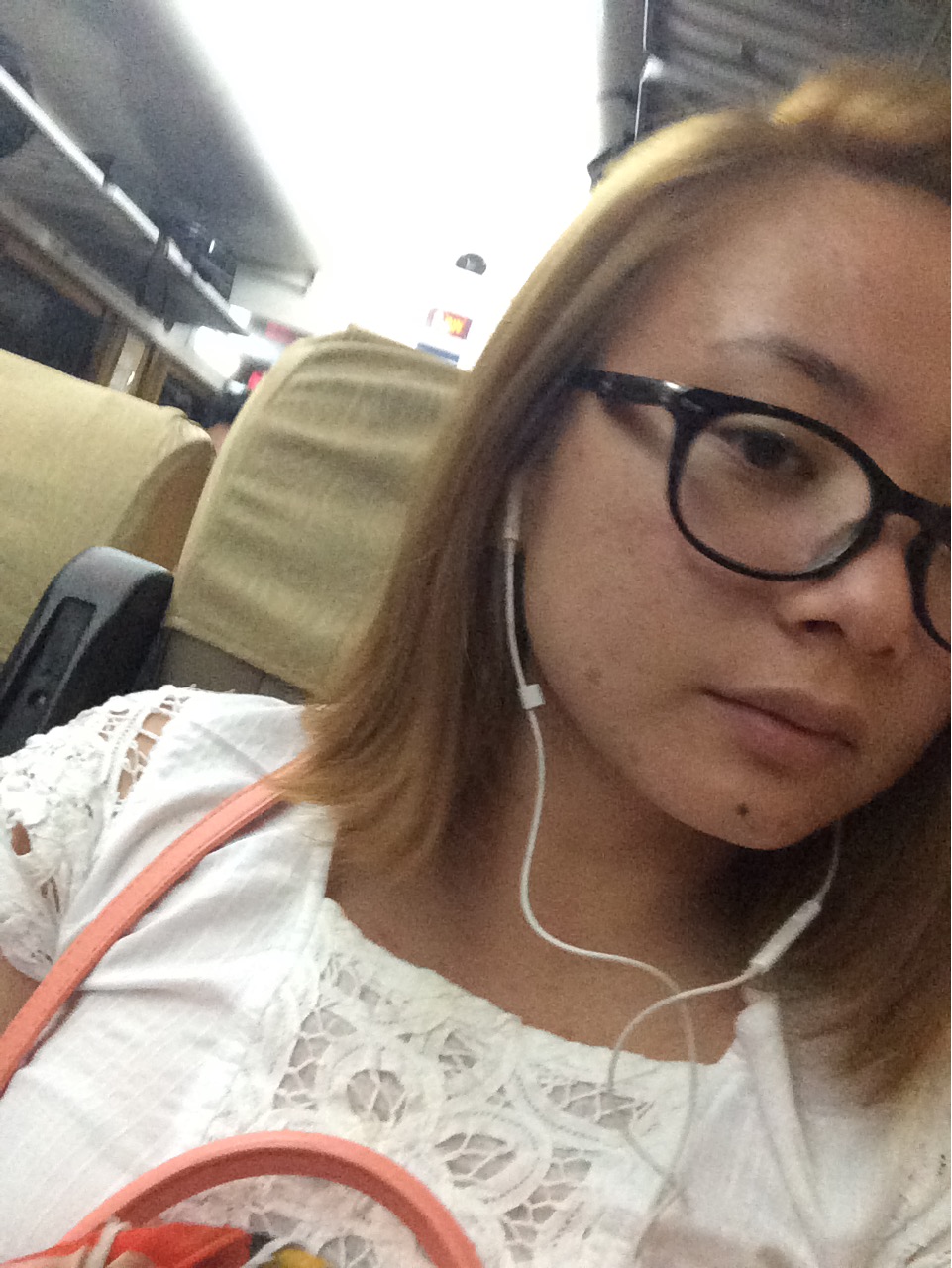 I didn’t buy anything from the trolleys for dinner because I ate from Cafe Nola before I boarded the train.. but I did buy train breakfast (with the help of the nice old man who sat beside me after the mother-daughter combo got off). He was explaining something about the porridge with chicken bits that cost VND 25,000 (I’ll pay a lot more dong for some salt and pepper). He’s really nice. Even though we couldn’t understand each other, I showed him my train ticket (the announcements are in Vietnamese) and he gestured to me when I should get off the train. Best train ride ever! 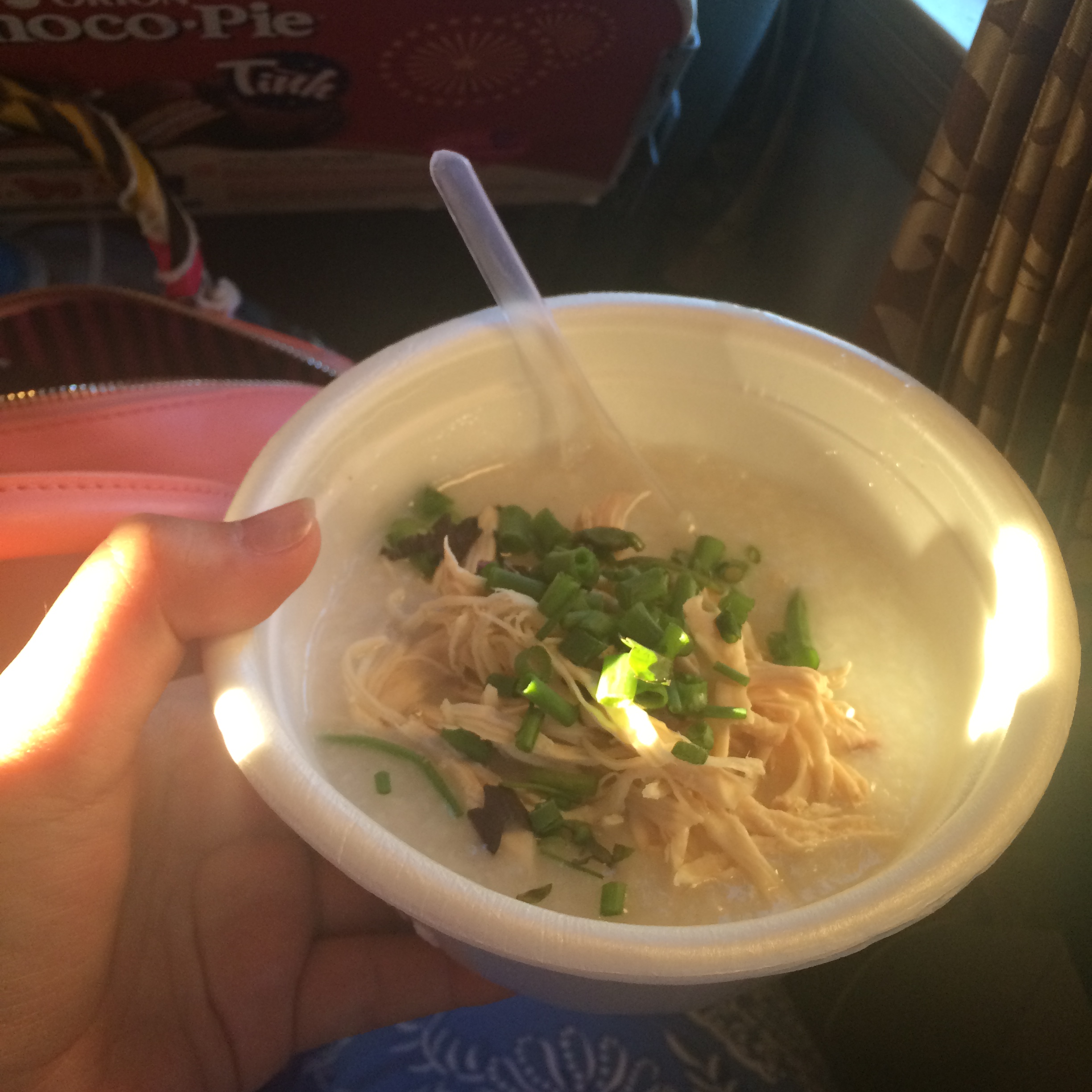 I am trying to overcome the challenge of actually finishing this Vietnam+Cambodia series since I have a lot of backlogs. I may have enough content to write about until.. October. Yet here I am, still writing about how my life went from 2-3 months ago. The stark contrast between my life then and how it is now has made me long for the carefree days of traveling by myself where I know no one and nothing, not even the language.

Only my close friends are aware that I was actually planning to quit my job before I left, along with the attempt to extend my vacation and just go where the wind takes me. However, my mom’s condition took a turn for the worst a few weeks before I had to leave and I decided to not go through with quitting since my job pays for premium HMO. Her health since then has been one godawful roller coaster ride, and we cherish the few good days in between.

Half the time I feel guilty that my thoughts are full of hate and anger. I could never hate my mom, but I hate this horrible situation. I hate how she screams in pain, or how she whimpers in her sleep. I hate how I have been to five different hospitals this year alone, and it’s not even over yet. I hate that all the feelings I have buried against other people have started to resurface because I no longer have the energy to keep them there. I hate that my siblings have to experience this at their age when I was young and carefree during that time of my life. I hate that I got asked if I wanted a promotion at work because it’s so hard to keep up with everything as it is, and I don’t even enjoy what I’m doing. I hate that I am so confused on how I should be feeling with having a mother who is alive and breathing, but always in horrible pain. I hate the feeling that my life is on hold because I know I would hate myself more if I am not there for her when she needs me. I hate the fact that most of my anger is stemming from my selfishness. I hate that my hate is at capacity.

Maybe that’s the real challenge then. To tamper down all the negative thoughts from thinking about the future, or thinking about what could have been or what could be. I guess in time, I will understand that there is a bigger picture in all these. That there is a reason on why the same omnipotent higher being who created magnificent sunrises, such as the one I experienced in Vietnam, would also introduce bad things to good people. But right now, I hope to get through these posts first.